What is a locker?

A locker is an upgraded part of the differential in a four wheel drive which locks the axle together. This means that both wheels on the axle must turn at the same speed. Most vehicles have open differentials, meaning that the wheels on an axle can turn at different speeds. A locker is designed to give extra traction when you are four wheel driving, and is one of the easiest ways to make your vehicle more capable.

Most four wheel drives come standard with open differentials. Some models come out with LSD’s (limited slip differentials), and some even come with rear or dual lockers. A Locker replaces the centre part of a differential, which is why when a differential blows up a lot of people opt to just put a locker in. 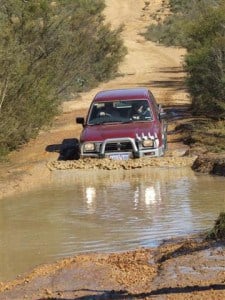 Water Crossings with a Locker are much safer

What is a locker used for?

If you have done much four wheel driving, you would know that the suspension moves up and down (and the wheels follow) in order to keep the car body as level as possible. What often happens when four wheel driving is that a wheel will come off the ground (either upwards or downwards). In a normal four wheel drive without a locker or LSD, the power that goes to an axle will be transferred to the wheel with the least resistance. In essence, if a wheel comes off the ground on an axle it will spin and the other wheel will not. This is a problem, because it means that axle is no longer getting any traction, and hence it doesn’t help your vehicle to move.

The term ‘being crossed up’ is used when you get two wheels off the ground on different axles (on diagonals). If this happens, all of the power goes to the wheels that are off the ground, and the wheels that are on the ground don’t turn at all. Essentially, you can’t go forward or backwards and you will need to get pulled out. You might think this is uncommon, but unless you have upgraded suspension you don’t have to be doing anything serious for it to occur. However, if you have an ARB Locker, then when one of your tyres comes off the ground, you simply stop and activate the locker. This forces both wheels on the axle to turn at the same rate, and as a result forces your vehicle to have traction. Once the ARB Locker has been activated you will have a much greater chance of driving out.

A video is the best way to fully understand how these work, so have a look at the one at the bottom of this page. Ultimately, an ARB Locker allows you to tackle difficult obstacles at a slow, controlled speed. There is a saying amongst us four wheel drivers that ‘Momentum can overcome any obstacle’, which is true in many cases. However, often it is at the cost of a dented panel, bent shock absorber or worse. I much prefer to keep my speed down and to four wheel drive at a more controlled rate. With an ARB Locker you can slowly crawl up a highly articulated hill whereas a 4×4 with open diffs would have to go very quickly to get up there. Instead of having to spin your wheels in order to get through, you can idle up and not break traction, which is better for the four wheel driving tracks, for your vehicle and safer too. 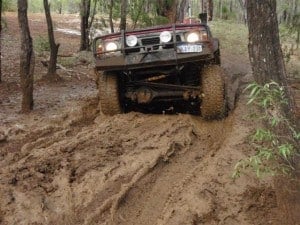 There are a few different types of Lockers. Some come on automatically when one wheel spins and the other is stationary, whilst others are electronically controlled and then some are pneumatically controlled (like the ARB Air Lockers). These rely on air to stop the axles for each wheel moving independently, and need to be run from a small compressor. These are probably the most popular, as they are very reliable.

You may have come across the term LSD before, which is something that comes standard with a few four wheel drives (My Hilux has one) in the rear diff. These are basically similar version of a Locker, however they use a clutch. The clutch tries to stop the axles moving independently, and as a result they work in a similar manner to a Locker. However, the clutches tend to wear and they are never as good as a true locker. In saying this, an LSD that works well is considerably better than an open diff.

If you are going to fit an ARB Locker, then you will need to fit a compressor in order to get air to the lockers. Most people go with the ARB lockers, although you can use many different types and brands of compressors to power them. It’s important to consider where you are going to mount the compressor. A lot of people put them under their bonnets, but I try to steer away from this. Under the bonnet is a harsh environment at the best of times. It’s often hot, (and changes temperatures regularly), it gets wet and muddy regularly and plenty of dust goes through the engine bay. Consider an alternative like mounting the compressor under a seat inside the vehicle, or in one of the back panels behind the plastic trim. This way, they are kept clean and cool and will tend to last a lot longer. In saying this, the most popular option is to mount them in the engine bay, and a lot of people have them last for a long time. 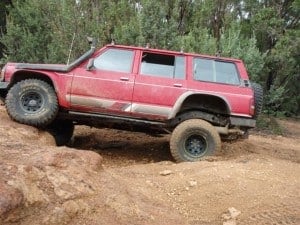 When should you use a Locker?

In general, your locker will not get used unless you need it. Most people will go four wheel driving and not use their locker until they get stuck, or they need to go up a difficult section. An ARB Locker needs to be activated when you are stationary. What this means is that if you are going up an articulated hill then it’s a good idea to turn the locker on. However, you should never use a locker on bitumen or at high speeds. Lockers are designed for low speed work and should be switched on before a difficult ascent, when you are stopped up an ascent and at times when you are descending slowly. 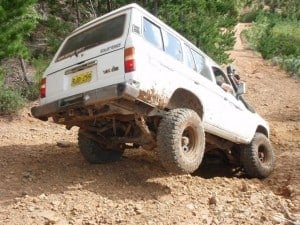 You would never get out of this without a Locker

Disadvantages of a Locker

Honestly, there is no real disadvantage of a Locker. Some people complain that they make four wheel driving too easy, but unless you have an automatic one you don’t need to turn them on! Of course, they cost a bit of money and you have to fit a compressor somewhere, but most lockers are considered stronger than a standard centre differential anyway. There have been a number of tests that show an ARB Locker is considerably stronger than the standard differential components in most vehicles.

If you are trying to decide whether to get a front or rear locker, the answer is very simple. The rear of a vehicle is generally considered stronger, and the best place to put a locker. You most often need a locker when going up a hill, which means that a lot of the weight of your four wheel drive is sitting on the back tyres. By putting a locker in the rear you will get better traction than one in the front. A lot of people complain that by having a front locker you can break CV’s easily. By fitting a locker the next weakest point will be the first to break, which is usually the CV’s (as the front CV’s in most vehicles are not that strong). Of course, dual lockers are the ultimate way to go, but they aren’t cheap!

Suspension Lift or a Locker?

A common question is ‘What should I fit first; a Locker or a Suspension lift?’. In all honesty, a Locker will make you go further than a suspension lift in most cases. Of course, traction is of no value if you don’t have any clearance, so look at your situation individually.

ARB is probably the biggest four wheel driving accessory brand in the world. There are plenty of other competitors, but ARB has built up a very solid reputation. The only complaint that you hear about them is the price, but then you very rarely get a product that isn’t any good from ARB. ARB make a huge number of 4×4 Accessories ranging from Rooftop Tents through to Bull Bars, Air Lockers, Compressors, Fridges, Recovery Equipment and more.

Where can you get an ARB Locker?

There are a number of places you can purchase an ARB Locker from. A lot of people get them online (be sure to check the prices in USA as well as locally as you quite often find they are cheaper from USA even with the hefty shipping cost included). I would highly recommend looking on eBay; they have great deals.There are plenty of ARB stores across Australia and throughout the world, and any big four wheel driving accessory store should stock them. Lockers are designed for specific vehicle models, so make sure you get the right one. 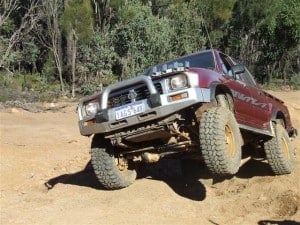 A wheel in the air without a locker means no traction

Fitting an ARB Locker can be done, but it does take a bit of knowledge and skill. A mechanic will be able to do it for you, or you can get ARB or a four wheel driving shop to do it. They will charge a bit to get it done, but at least you know it has been done correctly. Ensure that the air is hooked up correctly and that your compressor runs properly too!

All in all, an ARB Locker is one of the best accessories that you can add to your four wheel drive. They make four wheel driving safer as you are in more control; they minimize the chance of damage to your car (and to the tracks) and help you to get to those amazing camping spots. I would highly recommend getting an ARB Locker, as do thousands of people throughout the world who have them and use them regularly.

Below is a video which very clearly shows how an ARB Locker works: