Look at the water!

We managed to pull out of the caravan park just after 8AM, and went up the hill a little to get a photo of Table Island. I was glad we did, as the water was like a mirror, and very different to what we had seen on previous days. A short drive later and we pulled into Lucky Bay. You drive past Frenchman’s peak, which is available for hiking up and looks well worth doing. However, being on such a time budget we pressed on. I must say, I was bitterly disappointed with the Lucky Bay camping facilities. For what is known as one of the best beaches in WA, the space and arrangement for tents and caravans is pretty average. The camp kitchens look top notch, but the tent site is just one big area (about 30 metres by 30 metres) where everyone is camped in like sardines, and has to walk to their vehicle which is parked in the car park. 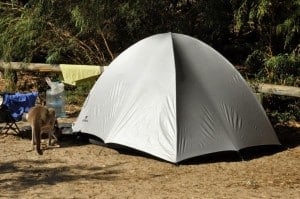 Local Kangaroos around the tents

The caravan site is much the same – one big gravel area where everyone is right next to each other. You do however, get to keep your vehicle next to the caravan/camper trailer! One would have thought the DEC would upgrade the areas set out for camping; it is probably limited to about 10 tents and 12 caravans. Considering its reputation, I expected a lot more. I’ve been to sites in much less impressive locations which are set up with roomy, individual sites and camp central camp kitchens and toilets. No one wants to be camped right next to another tent or caravan! However, I’d suggest this might be due to trying to limit the impact so many visitors would have on the surrounding area. 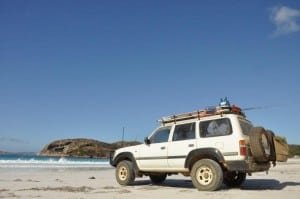 We drove onto the beach, and after watching the perfectly clear waves roll in I couldn’t resist getting wet to see if I could get some photos of them. The water was freezing (and I ended up with pockets full of sand) but it was refreshing none the less. Lucky Bay is a stunning place, but I wouldn’t put Thomas River or Duke of Orleans bay off the visiting list; I would say they are both just as good! 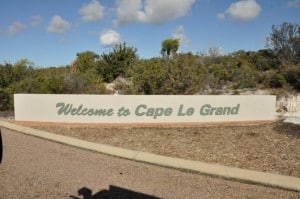 On the way out, we checked out Le Grand Beach and the camp grounds, and saw an inflatable boat going round and round in circles just off the shore with no one in it. Apparently the driver had been tipped out by a wave on the way in, and had swam away from the boat as quickly as possible to avoid being run over by the propeller! 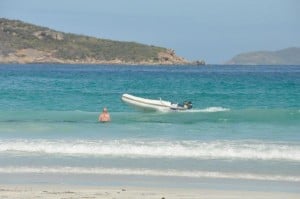 It chugged away for a good 20 minutes, until it eventually got pushed into shore with the waves, and the motor turned off. I guess a kill switch attached to your arm will be the next thing the poor bloke buys! We were considering driving from Le Grand Beach right the way around to Esperance as it cuts off about 40km on the bitumen, but decided against it as the tyres would have to be deflated and re-inflated at the other end, and we needed to get moving.

I rang Coleman in Esperance, who were more than helpful as per my previous experiences. They told me one of the camping stores had a regulator available and it was ready to pick up. Coleman had told me that this problem was unusual and that they didn’t normally have any issues with the even temp burner.

Upon speaking to Pete at Camping and Workwear I was informed that a number of these ‘regulators’ had been replaced by him alone! I’d highly recommend this camping store – he went out of his way to test the burner and make sure everything was working whilst I was there. I did however pick up a spare regulator and hose just in case it all went pear shaped once again. It’s amazing how a little thing like your burner can transform a holiday; after 9 days of cooking on a single burner of which 2 meals had fallen off and numerous burns had resulted, we were happy to have the 3 burner back again. It makes life easy for cooking things at the same time, and you have a much more even flame! 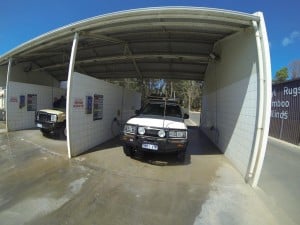 We took the 80 to the car wash to get rid of the remaining stinky salty mud – 7 Shelden road. I reckon we chewed through around $30 of coins to high pressure clean the stuff off. Half an hour later the car was clean and I was covered in mud! Somehow a bird I had hit ended up under the car, and that came out with the mud looking not even remotely like a bird. With the 80 feeling a bit cleaner, we pulled into Woolworths to pick up a few more supplies, and Red rooster for lunch. After filling the cruiser up (averaged 19.5 litres per hundred kilometers over the last 750km of mainly 4WDing) we headed off towards Stokes National Park. 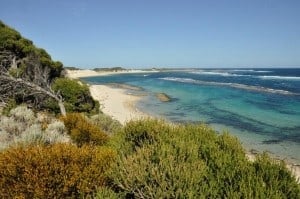 Shoal Cape – what a place

The plan was to check out Quagi Beach campsite, which is 2WD accessible. We pulled in and had a quick look at the beach, and the facilities. It looked ok, but we decided to head to the DEC inlet campsites instead. Before heading off to them though, we called in at Fanny cove campsite (another DEC site that is free to camp at and in a very nice location, with a new toilet) and Shoal cape? I was blown away at shoal cape by the beach and incredible fishing and diving locations. This is one place that I will be back to check out – apparently the diving is just as good as it looks!

To get to the DEC sites, you have to go back out to the South Western Hwy and continue along it for about another 16 km. Having just let the tyres down a bit, we proceeded slower than usual and pulled into the DEC site on the western side of the inlet. We soon found out that after the fire had destroyed the north and south camps, the DEC built a new camp in the same location as the north, known as Benwenerup. The campsites are large, with 3 set aside for group camping, 2 great camp kitchens and toilets. The whole setup is new, and seriously well done on DEC’s part. 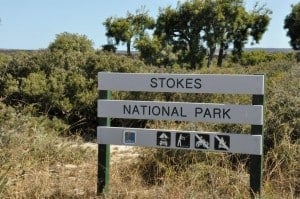 We introduced ourselves to the volunteer camp hosts, and picked a site to set up on. The tent was still wet from the early morning pickup, and gave us an early shower! We soon found that the bees loved any water, and were hanging around like flies! After setting the tent up, I realized we had coverage and managed to upload a few photos onto the 4WDing Australia Facebook page. 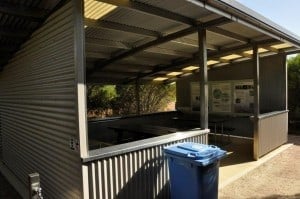 I was keen to check the wheel nuts were still tight after the terrible roads we had driven on, so did a quick walk around the car. Almost 90% of them were still tight, which was good to know. No one wants a wheel coming off at 110km/h! That night, I noticed the battery seemed to be a bit low, considering the solar panel had been on all day and we had driven for a number of hours too. I started the car to make sure the isolator was opening up, and all seemed fine. In a matter of minutes the auxiliary battery went from 12.24 volts to 13.78 which I was happy with. After turning the car off it dropped back to 12.9V, so I wasn’t too concerned.

Whilst cooking dinner, we had a number of bees fly straight into the LED light, and a big dragon fly that kept stumbling/flying around us. It eventually took off into the burner, and caught alight. Poor thing! We crashed early, having planned for a big day exploring the western side of Stokes National Park.