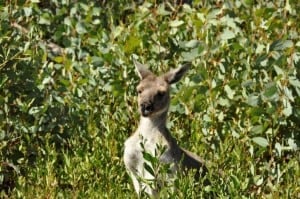 A friendly roo on the way to Skippy Rocks

The sun got us up pretty early by shining directly onto the tent. We ate crumpets for breakfast, and after a short walk to the inlet we packed the car and headed back out onto the South Western Hwy to visit Margaret Cove and Skippy Rock. The drive is only about 20km, so we were there in no time. We came across a number of kangaroos on the track, lying down or nibbling on the side of the road. They weren’t very afraid of cars, as we could get quite close! 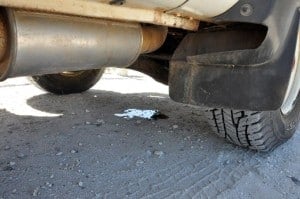 That can’t be good

Only one person was camped at the DEC site, which has BBQ’s, a nice day use area and toilet for the campers. We went for a walk to the boardwalk at Skippy Rock, and admired the view for some time. A short walk back to the car, when my stomach dropped. From a distance, I could see a pool of oil under the front diff. Not good. When you aren’t near any civilization, having a breakdown like this could be a real pain. 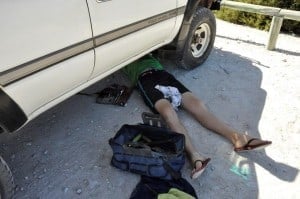 I got under the car with a 12mm spanner and found every single nut holding the front differential in place had worked its way loose. After tightening them all back up again the leak seemed the stop, which I was happy about. I checked the oil level, which was just below the filler plug and also the rear diff nuts to see if they had also worked loose (which they hadn’t!).

The torque specifications for the front differential are only around 35 nm, which I thought was a bit low when reinstalling the front diff after having the locker fitted. Now I have another thing to check on regularly! I remarked that it was very lucky to have happened where it did; not a drop was spilled prior to the car park; it must have just split open then. Thankfully it didn’t happen whilst we were travelling 50 +km at a time on gravel roads at a decent speed. If it had really come loose, the front differential could have been seriously damaged. 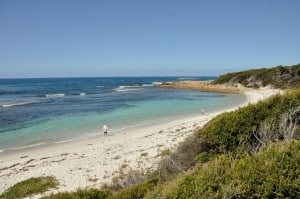 The beach at Skippy Rock

Skippy rock has a nice surf beach too, which we called in to check out. We had seen a sign to Torradup inlet, and decided to check it out. A few km later and we pulled onto a very narrow shoreline next to a gorgeous inlet (more like a river) and decided to have a go fishing. It wasn’t long after we had baited the rods and thrown a bit of burley in that I landed the first black bream. We caught about 8, letting the smaller ones go and keeping enough for a feed. I filleted the fish and put them in the fridge, ready for dinner. After a quick bite to eat we headed back towards camp. 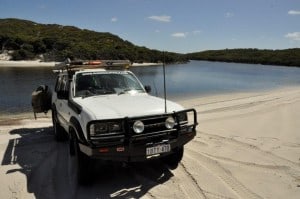 Enjoying the peace and quiet

Before arriving though, we decided to call in at Young River, which is accessed on the same road that the ranger lives on. This track is closed from time to time, but was in good condition. The river was surprisingly big, and reminded me somewhat of the Murchison at Kalbarri! Back at camp, I wanted to check the nuts on the differential again, fill it back up and see if I could put a bit of sealant on the bottom of the diff to stop it leaking completely. I could see only a small drop from time to time on the bottom, so wasn’t too concerned. 20 minutes later the diff had an extra 750ml in it with Loctite sealant around the bottom (where the gasket normally squeezes out) and it looked like the oil leak had stopped. Whilst I wasn’t expecting the Loctite to work miracles, I figured it would probably be help.

I really didn’t want to be removing the diff center, cleaning the gasket and re-fitting it in the middle of the bush, where it is unclean and awkward! Hopefully it would hold until we got back to Perth. 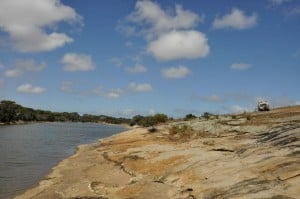 We lazed around for a few hours in the afternoon and I made a few phone calls. At about 4 we decided to go for a walk, heading off along the Stokes Heritage walk. There are some huge Zamia’s along here (big palm looking plants, which aren’t actually palms at all!) and we came across a massive wild bee hive. We didn’t go all the way, and proceeded to head back to the day use area to check out any bird life. A number of endangered birds live here, and we wanted to see if any were around. I took photos of a few birds, but none of them seemed to be the same as the endangered ones on the sign! 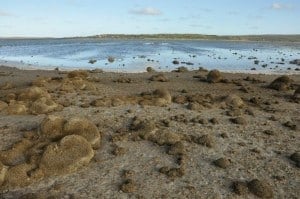 Stokes inlet – different to the beaches we were used to!

An early dinner (garlic bream and salad!) meant we could pack up part of our campsite ready for an early departure to Bremer Bay.