We woke to a wet morning, and to find that the awning on our Oztent had collected about 15 litres of water! I carefully moved the chairs away and tipped it onto the lawn. I found water had gotten into our burner too, which was a bit of a worry. 2 of the burners would light, but the third one needed some drying out with matches before it took. I boiled the kettle with it to make sure the burner was completely dry. We will have to get into the habit of closing the burner lid at night! 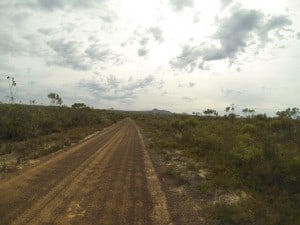 On the way to the Fitzgerald National Park

After custard and fruit for breakfast, we headed off to do a four wheel drive track north east of Bremer Bay, into the Fitzgerald national park. Despite the weather looking very average, we decided to push on and explore. Bremer has a brilliant reputation, and a cloudy day (with a forecast for thunderstorms!) wasn’t going to ruin it! 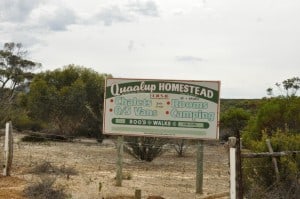 We drove out to Swamp Road, and went past Quaalup house where you can stay in chalets or camp. From there, we entered the Fitzgerald National Park (which really is an incredible place) and headed towards Point Anne. This is a very popular location for watching the whales in between July and October. Apparently they even breed in the bay, and the DEC has done a cracker job of making the place inviting.

We met one of the Fitzgerald National Park rangers, who explained it had all been done within the last month. There are two great places to sit and eat your lunch, 2 gas BBQ’s in different places, stunning views from 2 different board walks and viewing platforms and brand spanking new toilets, which have been done very well. I have yet to see any DEC work that compares to this; it is incredible! We went for a walk to check the view out, which due to the overcast weather wasn’t the best, but I imagine when the whales come in it would be incredible. 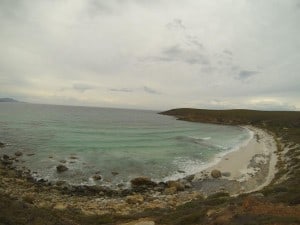 The view from Point Anne

Just around the corner from Point Anne is St Mary’s inlet camp ground. This is also a DEC site, with a toilet and camp kitchen. It is located with the beach on one side (that you can drive on) and an inlet on the other. From here, we went back to Trigalow beach, where we drove down the rubber matting and onto the beach. I dropped the tyres from 18 down to 15 as we had 20km to do on the beach, and with no backup vehicle I wanted to make sure everything went smoothly! We drove along the beach for quite some time, and pulled off near house beach. There are 2 campgrounds here, set up near pristine beaches with boat access. Whilst driving around, I reversed back on a very tight track and caught my 14 foot beach rod, snapping it in two places. At least it wasn’t a super expensive rod; I’d have to get a replacement at Albany.

Doubtful beach had been recommended to us, so we pushed onwards, and drove up through a recently burnt section to look at Doubtful Island. The 4WDing around here was a lot of fun; plenty of rocky sections that gave the old 80 a bit of a work out. I kept teasing my wife that a GoPro camera mounted on my side window pointing at her would get the best footage of all – she doesn’t like side angles and pulls all sorts of hilarious expressions when we are off road.

A short time later and we parked at Doubtful beach, keen to eat and catch some fish. We gathered the minimal fishing gear needed, and went for a walk around the rocks. I know a few people have caught big squid here, and was keen to see if we could too! The plan was to bring the herring around with burley, and then the squid come out for them. After fishing for a little while though, it seemed the herring didn’t want to play (or there weren’t any around!). We caught a couple of weird looking fish, and sent them back with no idea what they were. At one point, we had a red fish with big teeth jumping out of the water over and over again just near us. 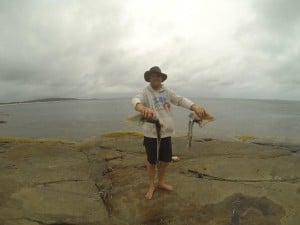 Eventually I gave up, and threw a squid jig on. On the first cast, I had a big strike, and pulled a decent sized squid into shore. From the tube to the end of its tentacles the squid would have been about 80cm long; so a good feed. After that, it went dead, and even with Sarah fishing for squid we had no takes. Finally, another squid grabbed my lure and I pulled it in, roughly the same size as the first. We gave up after that, and spent a long time trying to clean the squid. They had both squirted ink out and it was a messy job. We were rushing, as we could see big storm clouds on the horizon.

After cleaning the squid, we headed back to the car, where an army of ants had me hopping around trying to pack up as quickly as possible! We drove back via Gorden Inlet, and crossed the inlet over, arriving back in Bremer only a few hundred meters from camp. I fueled up again for the trip to Albany and 4WDing around Waychinicup, and we finished cleaning the squid at the fish cleaning station (which is absolutely awesome!).

Dinner consisted of garlic squid, hand cooked chips, salad and pineapple, and went down very well. We sat inside the annex of the tent after dinner though, as the wind had picked up a bit and we could feel it getting colder and colder!