We woke to rain on the tent, and a day that was overcast and cloudy. I discovered an interesting fact today; foxes will truly eat anything available to them. We had a big tin of drinking chocolate (one of the 400gram ones) sitting on the table outside when we went to bed, and found the lid on the lawn and the container nowhere to be seen. It had been taken off the table, squashed open (we could see the remnants on the lawn) and then stolen! 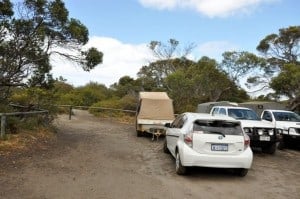 Not long after we got up the rain stopped, but the wind kept blowing in. The forecast for the next few days was strong wind and the occasional storm. We packed up and loaded the 80, heading towards Albany. On the way, we called in at Point Richie, a shire run ‘Caravan Park’ which is one place I will certainly be visiting at some stage. There are a number of sites located right next to a pristine beach, with kangaroos hopping around everywhere, a friendly caretaker, toilets and cold showers. 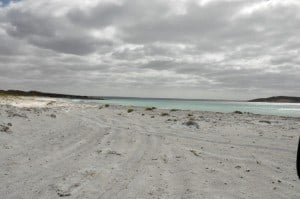 You can launch your boat there, and drive onto the beach just around the corner. There is also a stunning inlet which would be a bit of fun too! We headed off again, towards Waychinicup, a DEC site that had been recommended by my dad. The river flows into the ocean, and the whole area is protected by some massive hills/rocks. You can watch the swell roll into the inlet from the ocean, which is incredible. 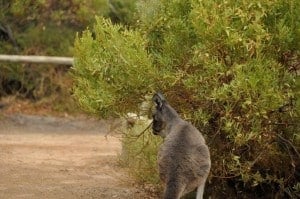 I was a bit disappointed at the size of the camp sites though; we ended up in the biggest and the Oztent still stuck outside the designated area. None of them allow you to have your car next to the tent either (some are close, but a lot are 10 – 20 metres away). However, you can’t complain about the location; it is a magic place. We set up camp, and made sure everything was tied down properly as the wind was howling in, even though it is very well protected. I imagine on the coast it would have been very nasty! 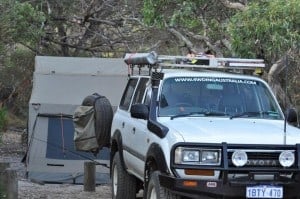 After a quick walk around the place, we set the little rods up and baited them with the fresh squid tentacles from the squid caught yesterday. We fished for a while, and got snagged several times with only a few bites. Being the impatient fisherman that I am, I soon gave up and Sarah followed suit. We had a number of little birds that were fearless; they would hop around your camp site, under your legs and feet and anywhere they wanted, in search of a good feed. Over lunch it hopped into the annex of our tent, had a nibble from what was on the floor and hopped back out! 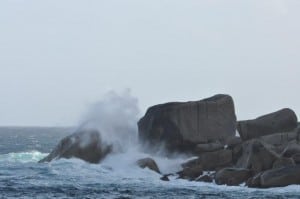 We lazed around for a couple of hours, and then went for a walk, to get photos of the massive waves coming into the inlet. They would smash onto the rocks at the entrance, and water spray would go everywhere! After a short walk out towards the mouth, jumping from rock to rock, we had a position on a tall rock and took a number of photos. The wind was insanely cold and strong though, so we didn’t stay for long! On the way back we stopped to watch the water rush into the inlet and then back out again. It really is incredible! 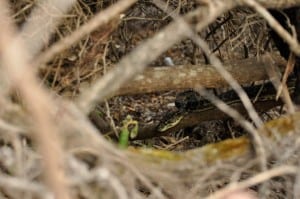 We bumped into another couple staying at Waychinicup, and were chatting to them when he noticed a snake in one of the bushes just near us. It was a big carpet python, and would have easily been 1.5 metres long! As the weather was cool it was just sitting there, wrapped around the tree and allowed me to take a number of photos. 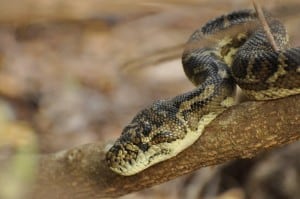 Tandori chicken wraps went down well for dinner, followed by drinking chocolate (we picked more up at Bremer’s general store after the fox ate it!). We were sitting there in the dark just enjoying the peace and would here a rustling in the bush not far from us. We got up, and found a Quenda (part of the bandicoot family) foraging in the dirt. It wasn’t the slightest bit worried about us, unless we made sudden movements, and we stood there watching it for some time. The camera got a work out too, snapping photos from all different directions. 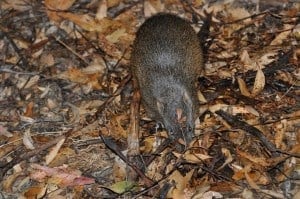 After a quick walk along the river, we headed back to camp, where the Quenda was happily walking back and forth, looking for food. It came within a meter of our tent, and happily wandered around for some time! The wildlife here is pretty special; it’s not often you come across animals like that in the wild! Apparently they also get quokkas here, which must be the only other place in the world, except Rottnest Island.