We packed our gear up early in the morning, and headed into Albany. The ranger hadn’t come to Waychinicup to collect fees (as the signs say) and as there is no honour box to pay fees, we got free camping. I’m not sure why the DEC wouldn’t put a fee station where you can self register there; it would pay for itself in a matter of weeks.

We headed into IGA in Albany to get some more food. You can live for a long time in between food shops, but the first thing to go is always the fresh vegetables and bread. After IGA we headed to Trailblazer (a local fishing/camping store) to see if I could replace my broken beach rod. $78 later and I walked out with a 12 foot 6 – 12kg Penn beach fishing rod and a bucket (as ours had shattered!). By now, it was late morning and we were starving, so we called in at a French Bakery, known as Hot breads. The pies were delicious, and had us going for a couple of hours. 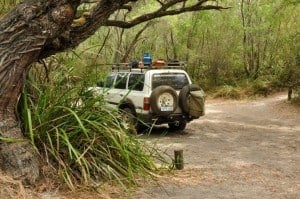 The scenic route from Albany to Denmark had us pass Torbay Inlet, so we called in to take a look. There is a great camping site here right next to the water, and you can drive out onto the beach. We did that, and went past Cosy Corner East, another great campsite not too far from the beach. Shelley Beach lookout was next, which is one of the best beaches I’ve been to. You can sit up the top on a big wooden platform (where they launch the hang gliders) and look over a perfectly coloured beach with a heap of people fishing. 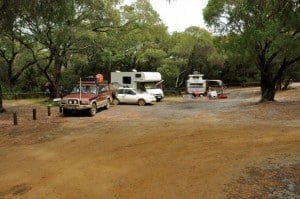 The camp ground at Torbay Inlet

We called in at the campground on the beach, which has had some recent changes. The DEC have deemed the damage being done due to excessive visitors too significant, so they have changed the camp site around. You now have to camp away from your vehicle, and there are sites that restrict you to tents only. Small RVs are allowed on the ocean side, but the sign says the impact will be monitored and the campground adjusted/closed as necessary. It was pretty packed when we were there, but apparently with the hang gliders, commercial fishermen and tourists all arriving on some days it gets too much for the site! 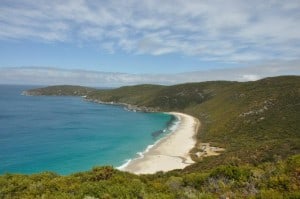 Shelley Beach, where the hang gliders launch from

After Shelley Beach, we headed out on an awesome 4WD track towards Torbay Point. The tracks are narrow and Sandy, with a lot of offset holes and a very bumpy track. The DEC has spent a lot of time putting rubber matting (and some nice plastic interlocking grids) down to aid with traction. The issue with the rubber matting is it is moved very easily, and we had to drive over piles of bundled up rubber, which could be a hazard for the tail shafts of your vehicles. The new plastic grid works a lot better, but no doubt costs a heap more too. 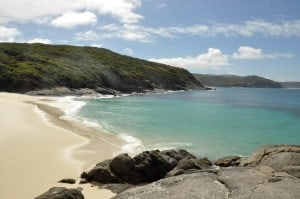 We went to all of the available places along the 4WD track, including the West Cape Howe, Dunsky Beach, West howe and Torbay head (the most southerly point in WA). West Cape Howe was pretty incredible; you stand on cliffs about 20 metres above the water where the waves pound in with such viciousness it makes it hard to look over the edge! There is a reverse point where the waves run into, known as West Cape Howe. Dunsky Beach was amazing, with some great reef and an awesome beach. To top it off, we didn’t see anyone there either, and considering we bumped into about 10 vehicles on the track I was quite surprised. 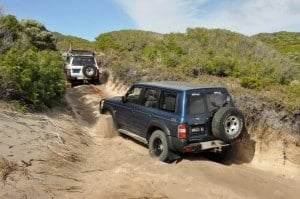 If you don’t deflate your tyres, expect to get stuck

On the way back, we got to the bottom of a hill and were signaled to stop by a driver up ahead. It didn’t look like they were stuck from where we were, but I got out to look anyway. Opposite wheels had dug holes, meaning he had no more traction. Both vehicles were GU Patrols, heading back out after a day of fishing. I soon found out neither had let their tyres down, and the first Patrol had only made it because he had larger tyres and a front diff lock. We waited for about half an hour while they let the tyres down on the bogged vehicle, attempted to drive out, drove the second Patrol down the hill, let his tyres down, hooked the snatch strap up and both made it to the top.

I was disappointed; the track has been chopped out severely, to the point where a number of 4WD’s with independent suspension would have a hard time in spots, and you have people coming in with their tyre pressures rock hard! Tyre pressures like that wear the track excessively, make your vehicle work much harder and frustrate people when you get unnecessarily bogged! 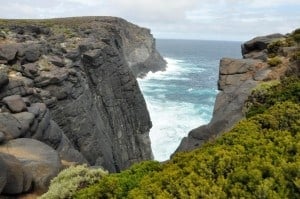 We eventually got back to the main road, where I pumped the tyres up and continued on to Denmark. Denmark really is a picturesque place, and I had been looking forward to exploring the area. We continued on to Parry’s Beach Road, to find a campsite. The campgrounds at Parry beach are quite unique; they are run by volunteers, camping is $5 per night per person and you are allowed your own fires. The site has solar showers, flushing toilets, plenty of bird life and is located in an area probably 200 x 100 metres under the peppermint trees.

We spent some time looking for my wallet, which I couldn’t for the life of me remember where I had put it after the bakery, until I finally realized it was still in my pocket! After a quick drive around, we picked a campsite, paid our fees and set the tent up. The ability to have fires here is lovely, but the smoke gets hung up under the peppermint trees and isn’t very pleasant after a while! I realized my Gopro had a full SD card again (60 gigabytes of photos and videos taken in 3 days!), so got it copying across to the portable hard drive. We went for a walk along the beach, and bumped into a volunteer here and had a good chat.

They had caught 10 tonnes of salmon 2 days ago, and 7 tonnes on this particular day, so things were going well. Apparently they have been having issues with a certain nationality of people doing everything they can to scam money, which is a real shame. We went through the Gopro photos from the last few days, and hit the sack. I reckon we have taken about 3000 photos so far, and many, many hours of videos!