The sun was shining and the sky blue today, which was a great relief as we had put off visiting Greens Pool in hope that the weather would improve. After pancakes for breakfast, we packed the car and headed out. We looked at Waterfall beach, Mad Fish Bay and then parked up at Greens pool. After putting a heap of sunscreen on and packing what we needed, we headed off down the stairs. 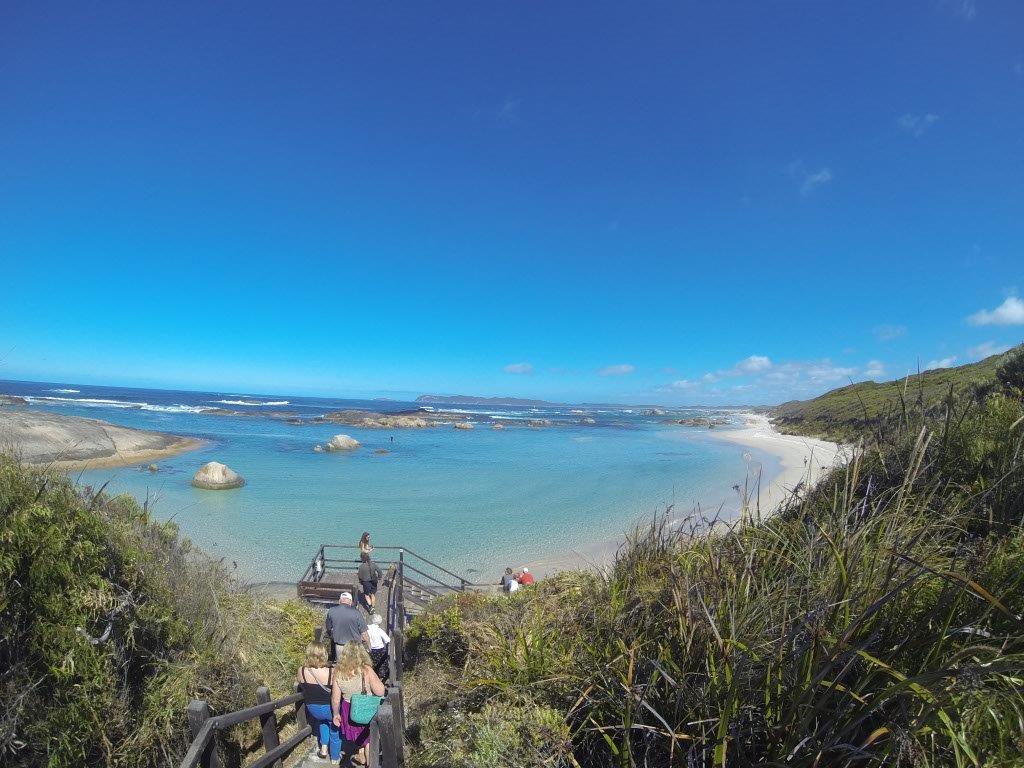 On the way down to Greens Pool

Greens Pool is truly an amazing place, with a number of big rocks and reefs out further which stop the big waves and swell and make the inside of the pool flat, clear and very attractive for a swim. We walked from Greens Pool to Elephant rock, to see if there would be less people to deal with. Being so easily accessed and such an incredible place, on days when the weather is good expect to see a lot of visitors. Elephant Rocks is a magic little beach, but had more waves than greens pool and also some seaweed, so we headed back. 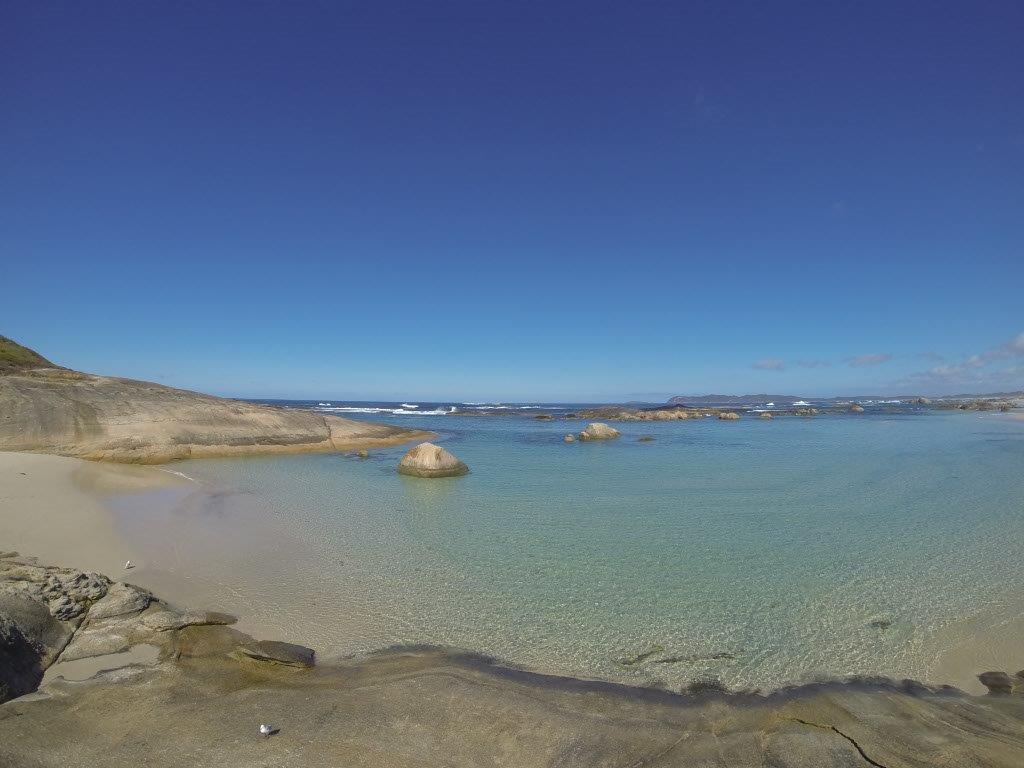 A trip down memory lane

7 years ago I started climbing a rock here when the rain started, and I slipped all the way to the bottom. The sand that I landed on was like concrete, and even with absorbing as much of the fall as I could with my knees and legs, I still broke 2 bones behind the toes, and fractured the heel of my other foot.

A spotter plane came down to see where I was, then the ranger drove his 4WD down onto the beach and I was loaded into the back of his tray via paramedics. They took me to Denmark hospital, where I was told both individual injuries would often be left to heal on their own. I was in absolute agony though, so was sent to a specialist in Albany the next day. 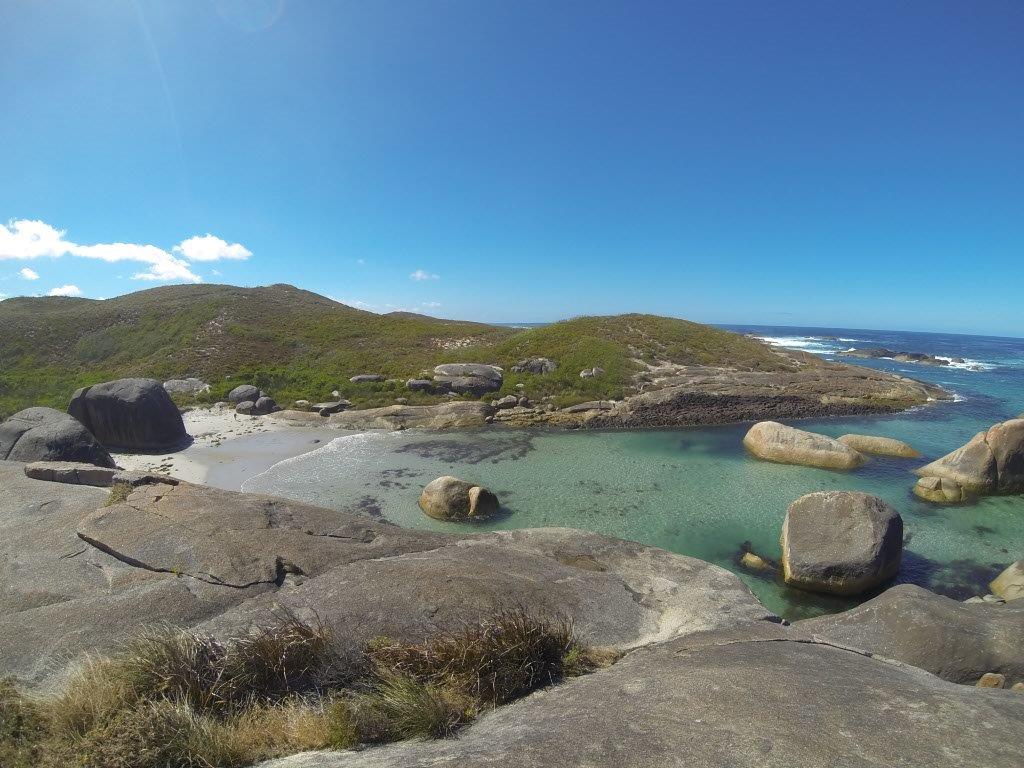 Looking down at Elephant Rock

He took one look at the broken bones and said I needed pins put in otherwise the bones wouldn’t heal correctly. After an operation I stayed in a house in Denmark for a week whilst my family tried to enjoy the rest of their holiday (which had been severely disrupted by my incident!). I was bound to a wheel chair as I couldn’t use either foot to support myself. About 5 weeks in, the foot with pins in it got infected, and I ended up in Murdoch Hospital for 4 days on an intravenous drip. I was told by the specialist that there was no chance I would be able to go snowboarding on a holiday we had planned in New Zealand, which was 8 weeks after the accident.

I ignored his advice, had the pins pulled out (OW) and had a great holiday in New Zealand with minimal pain. In a few words then, Elephant Rocks has a few memories for me!

The rest of the day

After having a swim at Greens Pool (where I couldn’t resist throwing the snorkel and mask on to take a peek) we wandered around taking photos, and headed back to camp. Whilst in the middle of making kebabs for lunch, we were told the salmon had come into Parry Beach, and the commercial fishermen were preparing to catch them. We scoffed lunch down, and headed onto the beach, where there were tractors, 4WD’s, trailers, a boat, boxes and a telehandler ready for the action. I turned the GoPro camera on, and recorded the whole lot, which was awesome. 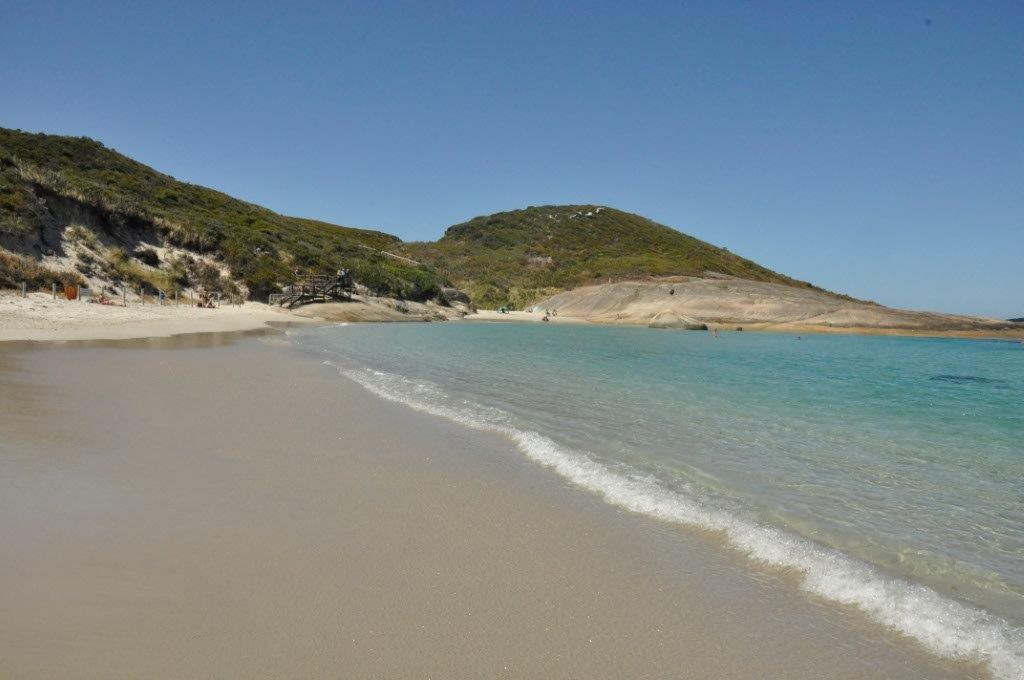 You couldn’t ask for better!

A boat is launched (mounted backwards on a trailer) by a tractor, and it takes off through the waves, with someone on the beach holding onto a rope. The net is attached to the rope, and is fed out the back of the boat as it drives along. The boat does a short loop, not more than 150 metres off shore, and comes back in, where it is loaded back onto the trailer and pulled onto shore. From there, the tractors (one on either side) pull the net onto shore. 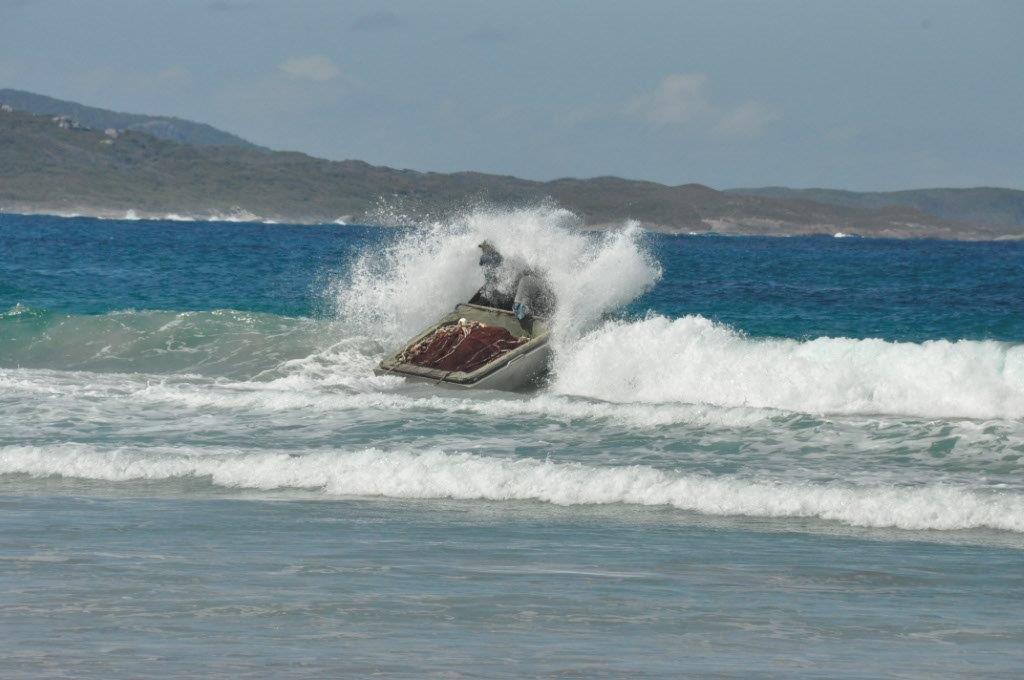 A big splash on the way out

They work their way together, so the salmon are pulled into one location. As the net got closer it was obvious they had caught something, as you could see fish jumping out of the water. When it was in the shallows, the Salmon put on a real appearance by jumping around, splashing and showing their tails and fins off.

Soon enough though, the salmon are beached, and a heap of big tubs are brought down. Parry Beach campers are able to get involved, and about 30 of us loaded the salmon into the tubs. Most of the salmon were in between 4 – 8kg, with the occasional bigger one. The salmon sit on the beach and flick sand and water up as they try to escape. We were all covered in wet sand by the end of it, and I copped a fair bit in the eyes! 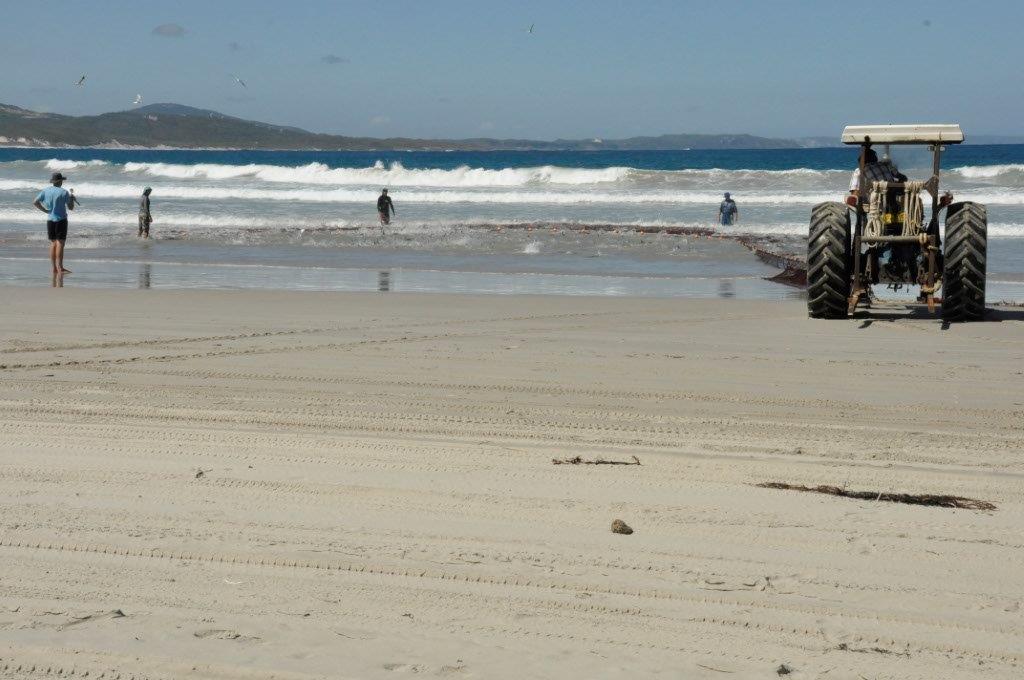 Towing the net in to shore

We took a heap of photos and videos of the fishing saga and I have to say, had an absolute blast. It is certainly an experience I won’t forget! The fisherman gave us a fish to take back, which I cleaned on the beach and filleted. Australian Salmon aren’t related to the Atlantic or tasty salmon we eat from elsewhere.

They are essentially a giant herring, and are not known for their great eating properties. Nonetheless, if you cut all of the red meat out, and you cook them with some garlic butter, garlic and lemon, they are quite nice. I have heard of people say that you can’t even eat them, but that is most likely because they aren’t being prepared properly. 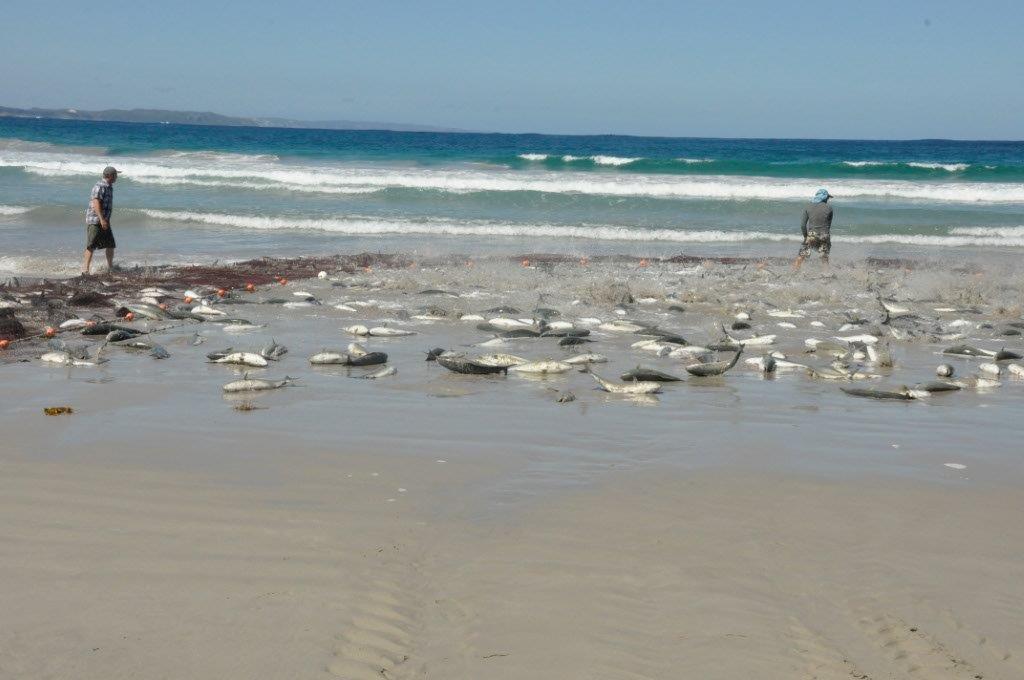 The fish that are caught go to Crayfish bait, or to cat food. It isn’t sold for much, but the haul of 22 tonnes wasn’t bad for a day’s work! 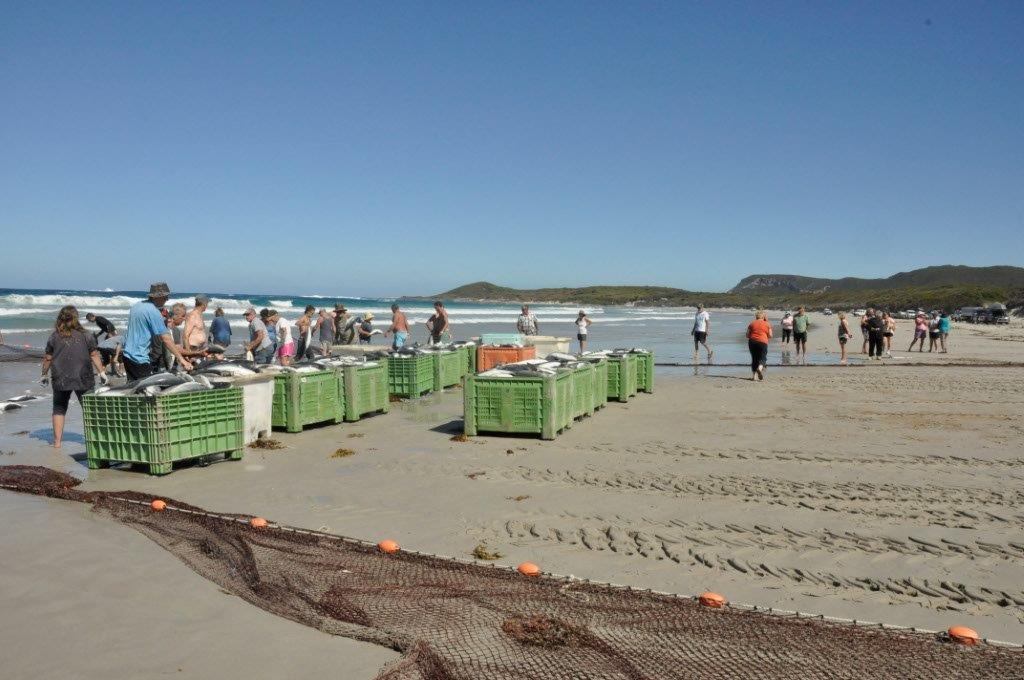 A lot of salmon!

The next day, we headed up to Dunsborough for a couple of days to recover, and then back to Perth. The trip down south was absolutely incredible, and we will most definitely be back to explore more of this awesome state.