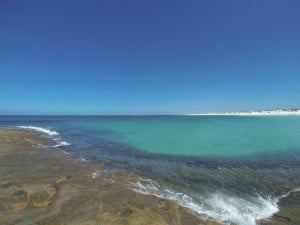 We woke to a brilliant morning with virtually perfect weather. We decided it would be worthwhile diving in the morning, so after a quick breakfast we geared up and headed out to the point. One side looked amazing, so we jumped in to look around. Unfortunately, the current and swell was too big, making the visibility average and very tiring to swim around in. We saw a couple of fish, but not anywhere near as many as we had hoped for. A quick journey around the other side of the point and we jumped back in the water, only to find that there was more weed in the bay than you could hope to swim through! It wasn’t long until we had given up on the idea of diving, and headed back to camp for lunch. 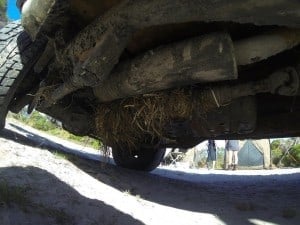 Seaweed collected by my tail shaft

After lunch, we decided it would be a good idea to check out the point. We wanted to try going along the beach, but found the seaweed prevented us. I did manage to pick up a large chunk of seaweed, which proceeded to wrap itself around my rear tail shaft and make a nasty clunking noise. We cut it off with a fishing knife, and headed back to camp, to set up for fishing later in the afternoon. 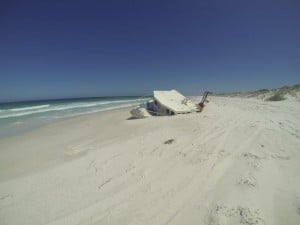 Found a huge boat washed up on the shore

A short drive later along the beach to find a fishing spot and we came across an old fishing/cray boat that had washed up on the shore. It was made of timber, tipped over onto its side and half full of sand. Someone had come along and shot a hole in each window, and we had a bit of a laugh taking photos and mucking around. 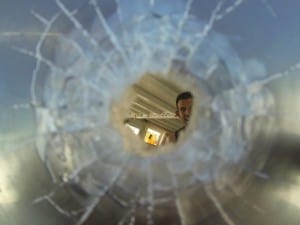 A photo through a bullet hole in the window

We spent the afternoon fishing off the rocks with the wind behind us and minimal swell. We only managed to get a few herring and a big gardy, which was a bit disappointing. After speaking to a few of the others in the area, the bigger fish were being caught later on in the evening. We were too tired and had a feed, so headed back to camp. Whilst cooking the fish up on the single burner, the pan overheated and tipped over. I reacted and grabbed the pan to right it, only to end up with boiling oil spill over my hand. Luckily it didn’t burn too badly, and the fish were saved too! We used a couple of ice packs and burn cream, and went to bed. 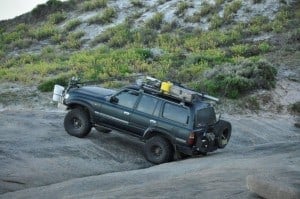 A big 80 at Israelite Bay, navigating the rocks