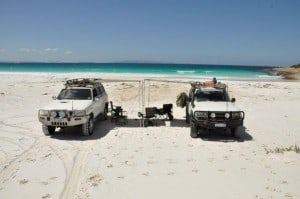 We woke up to an overcast day, and didn’t feel very motivated to get up and do anything! After a quick bacon and eggs breakfast we packed the cars and headed out of the campsite to explore the area. The volunteer DEC hosts had come down and collected our camping fees, and recommended a few places to check out. Dolphin cove is a short drive back out of Thomas River campgrounds, and is an incredible place to check out. We pulled into the lookout and stood around enjoying the view, whilst trying to capture it on the cameras. The sun had decided to show its face, which totally transformed the views. Litle Tagon Bay is also amazing, but the access is pretty limited to the beach. We had been told of a small 4WD track that goes to Big Tagon beach, and had to check it out. The beach is about 500 metres long, with plenty of places to fish and explore. The waves that roll in are crystal clear, and the water looked very inviting for a dive. We drove right to the end of the beach, and set the awnings up on the cars so we would have somewhere nice to relax under. 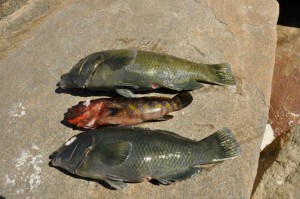 When you can get fish like these, its all worth it!

Daniel and I went for a walk along the rocks to see if there were any good places to go diving, and sure enough, there was. We geared up, and pushed the kayak into the water. After a short paddle, we threw the anchor overboard and jumped over. Within 5 minutes Daniel had landed a good Harlequin and I had shot a Blue groper. We dived for about an hour and a half, and ended up with a good feed of fish. At one stage, a blue groper that was well over a metre long swam by, and I fired a shot at it. The spear went straight through near its gills, and it started taking line off the reel almost immediately. A few seconds later the line wrapped around the reel handle, and the tugging stopped. The groper had broken free; not surprising given the size and sheer power of it! A groper over 50 cm can easily pull a person underwater; you have to be careful with them!

The paddle back in was much easier, going with the wind but we almost tipped out going through the swell. We cleaned the fish, packed it away and loaded the cars back up again, keen to head back for some food! After lunch, we were all very tired and just lazed around until about 4PM, when we packed up to go fishing off the beach. We drove down the main beach for about 5 km, and found a nice spot to fish. 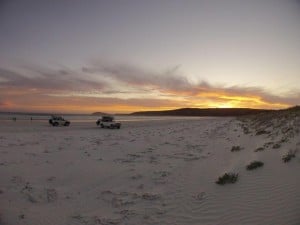 The sunsets were magic

A couple of hours passed with us throwing mulies into the surf with no result, and with the wind blowing in hard and the temperature dropping we decided to give up and move on. After spearfishing, fishing really is over rated. Too long standing around waiting for something to happen!