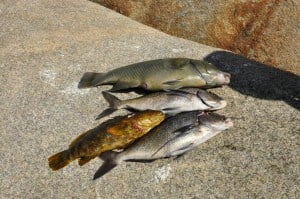 The fish just kept rolling in

After being met with another overcast day, but knowing the potential of the area, I got up early and tried to rouse the rest of our camp. We made pancakes, and spoke to the volunteer DEC hosts again about the weather. The wind had swung around again, and was quite strong. We went back to Big Tagon beach, and knew straight away that the diving wasn’t going to be as pleasant. The waves were rolling in much bigger than the day before, the wind was howling in and the sky overcast for majority of the time.

We looked at the surf for a while, and decided it was still worth going out. After gearing up, we pushed the kayak out into the water, only to get smashed by wave after wave after wave. Eventually they gave us a bit of a break and we managed to get out. The water was much choppier than the day before, and made it a very hard paddle out. 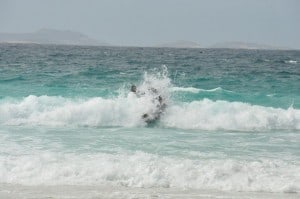 The anchor went in near the point, and we dived for just over an hour, landing a nice blue groper, a harlequin and 3 queen snapper. The diving wasn’t very pleasant though; the water was choppy and we kept getting waves dump on top of our snorkels. I’m pretty sure I won’t need any more salt for the next year! We decided to head back in pretty quickly, as Daniel was feeling sea sick and I wasn’t feeling the best either, after drinking half of the ocean. Obviously, after we had hopped back in the kayak and removed most of our gear, the anchor decided it wasn’t going to come off the floor. I had to put my fins and mask back on, turn the shark shield back on and then swim to the bottom again to unhook it!

Not long after we neared the beach, which by now had some decent sized waves rolling in. We had tied everything down to make sure if the kayak tipped it wouldn’t be lost. Sure enough, a huge wave rolls in right behind us, and almost tipped us out. We somehow managed to keep it straight, and ended up right near the cars; perfect! 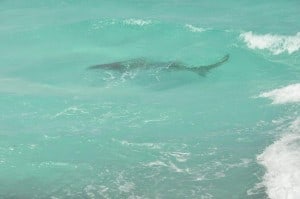 Even if you do bring the sharks around!

After cleaning the fish, I walked way out onto the rocks, and threw the frames over. We met 2 other guys that had just been on a long walk, and were chatting to them on the beach when Daniel exclaimed ‘SHARK’. Sure enough, a shark was cruising along the beach, only 20 metres out or so. I grabbed the camera as quickly as possible, and tried to get a few shots. For the next half an hour, we watched 2 sharks swim around the area; both around 2 metres long. They truly are graceful creatures, and have been given a terribly misrepresented name by the media. Daniel wanted to try and hook one for a bit of fun, so threw a couple of mulies out but they just weren’t interested. 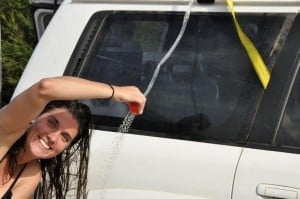 Lunch consisted of kebabs (which were delicious) and a couple of hot drinks. We then decided it would be a good idea to check out the solar shower bags, and see if they actually worked. The water was lukewarm (which wasn’t unexpected, given it had only gotten to around 28 degrees), but the arrangement to hang them up was useless. Unless you could hoist it into a tree, you would have to sit on something and have your shower. We ended up hanging it on top of the patrol, and having someone sit on the roof racks to operate it!

Two more mates arrived late in the afternoon, and we just relaxed and ate dinner. We noticed the weather was getting cooler at night – easily down to 10 degrees by 9PM at night. With 2 walls up on the gazebo and a tent on one side it wasn’t too bad though!