Day 6 – off to Cape Arid, Esperance 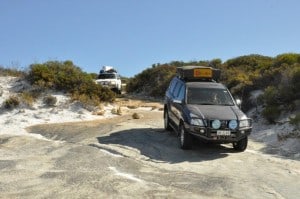 Having been in Cape Arid national park for the last 3 days and not visited Cape Arid, we decided it was time to take a long drive down the beach. You can get onto the beach at Thomas River and drive 29km! Make sure you know when high tide is though, so you avoid it as the beach gets too narrow to drive along. The beach is usually quite hard, and there is no one around, making it a great place to be! 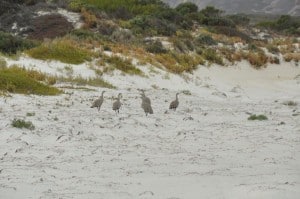 Wild geese on the beach

When you get near the end of the beach, there are a number of rocks that you can drive over, or tracks that take you around the narrow parts of the beach. You can hop from beach to beach, with no one around and some of the best coastline in WA. The beaches here are nothing short of stunning, and you can easily find somewhere out of the wind regardless of where it is coming from. We settled on the beach as far as you could drive, and set the side awnings up for a bit of shade. 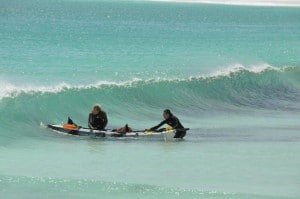 Every now and again you are just in the wrong place at the wrong time!

Daniel and I jumped in the kayak with our spearfishing gear and had a couple of dives. We landed a decent blue groper, a skippy, a boar fish and a queen snapper, and decided to call it quits. The paddle back in nearly killed us, with the wind howling out and the swell up quite a bit. We timed it badly on the way back in, and both ended up out of the kayak with our fish and fins dumped straight into the water. After a few minutes of searching blindly in the swell we found all 4 fins, and 3 of the fish. The skippy was going to a lucky fish (or bird!). 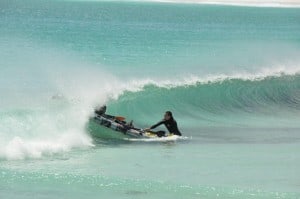 Sometimes it’s worse than others!

After cleaning the fish, we wanted to get a bit closer to Mount Arid, and thought we had seen a track further inland. We went back along the beach to a track pointing to mount arid, and started driving up it. However, to my amusement it ends at a car park and you have to walk (3 hours return) to get there. We walked a little bit up, but were keen to get back to camp. I put the Gopro on the bonnet for the trip home (44 minutes) and got some good footage of the area. 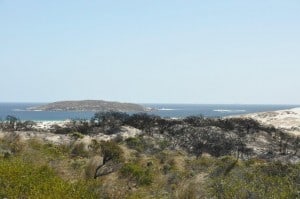 The view from part way up Cape Arid

We arrived at camp with the sole purpose of having coffees, so the kettle was put on and we sat back, very unmotivated to do anything! We decided to give the river mouth a go for fishing, so set the rods up, a burly trail going and began hoping for some fish. As we found out though, all the local birds must hang around the river mouth and they were causing havoc whilst trying to fish. They would dive on our bait, fly into the fishing lines and became a real pain. A big brown bird managed to get hooked in one of the lines, and I had to pull it onto the beach and cut the hooks out. It had a whopper beak which I am sure could do some serious damage, and had a go at me a few times! Nothing a jumper over the head couldn’t sort though.

We didn’t get anything, and being the usual unmotivated fisherman (stirred by the fact that in a few hours diving you can get your bag limits!) we packed up and went back to camp! We decided it was worth inflating the tyres, rather than having to do it early in the morning when we wanted to get moving quickly, and would wake the neighbours up!