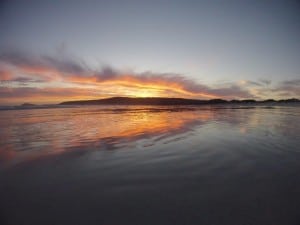 On to the next destination!

Having heard how busy Lucky Bay was, we were advised to get there as early as possible. We woke, ate and packed up as quickly as possible and were on the road just after 8AM. Thomas River is an incredible place, but with the excitement of a new place to explore we were keen to get going. We called in at Condingup to add some fuel to the 80 series, and were told that the chances of getting a campsite at Lucky Bay were slim to none. We made a call to the ranger, who told us all of the caravan sites had been taken in both Le Grand Beach and Lucky Bay (about 5km apart) and there were only a few tent sites left, which would mean the cars would have to be parked a distance away. 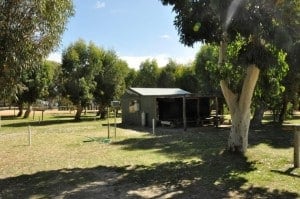 We were planning on checking out the Duke of Orleans anyway, so proceeded to head down Orleans road. The views were amazing, and we decided to find out how much the caravan park was. The bloke serving us was very helpful (the son of the owners) and gave us all of the options available. We were even offered use of the powered sites at unpowered rates if we didn’t use any electricity, so we had a better variety of campsites. We were given keys to the caravan park to drive around and check the options out, and we spent a good 30 minutes trying to find the best place. We ended up on 2 campsites near a great camp kitchen, being made fully aware that there would be 30 teenagers (14 – 15 year olds) arriving that day for a few nights on a school camp. At $33 per night per couple, or $4 more for a powered site, we weren’t going to complain. Hot showers, toilets, running water and a very pleasant place to camp! 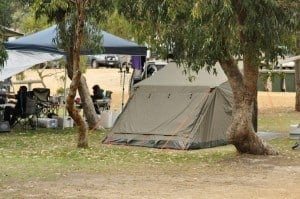 Our sites all set up

The son ran us through the places to go, where to fish etc and offered some of the best customer service I’ve had in a long time. We set up, enjoying the grass, sprinklers and a wide variety of bird life. I also notice the fuel at the caravan park was a good 15 cents cheaper a litre; kind of ironic considering they are further away than Condingup! After setting up camp, we decided to explore a bit, and dropped the tyre pressures down to 18. We headed off to big Wharton beach, which is incredible, but had waves that were a bit too big for the girls to swim in. If you hop across to the next beach, you end up in Victoria harbour which is totally protected, and an awesome place to spend the day. We set the awnings up, and took the kayak out for another dive. 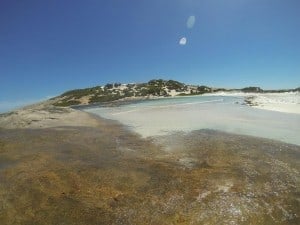 The ground was incredible, but there were very limited fish around. We explored both points, and didn’t see too much at all in terms of shootable fish! I did manage to hit a groper, but was too concerned about getting the perfect shot that I clipped the top of his head and it took off, easily breaking away from the spear. I attempted to get it again, but it was far too spooked to come near me. By the end of the dive we were both absolutely knackered, and Daniel managed a few minutes of swimming with one of the local seals. 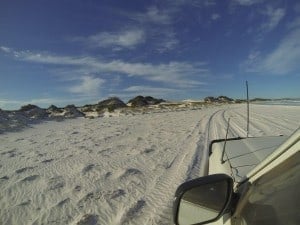 Driving back along the beach

There are a number of places in this bay that you can sit and have the water from the swell run over the top of you. Obviously, you need to be careful and make sure it is safe, but there is plenty of protection from the rocks. At this point, everyone was keen on getting some fish, so we headed to a place that was recommended for herring and squid. I caught a couple of herring on 30 gram slices, and we had a lot of lures getting stuck on rocks and seaweed! We gave up pretty quickly, and headed back to camp. 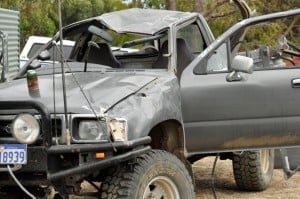 I doubt that will be back on the road again

We were told of a group of very rowdy campers in the Caravan Park who had rolled their vehicle on one of the roads. We checked out the Hilux, which was completely wrecked and well and truly a right off. The roads around the area are not very good; single lane bitumen roads with a number of gravel roads too. Judging from their behavior whilst we camped here, it was pretty obvious they had been drinking far too much!