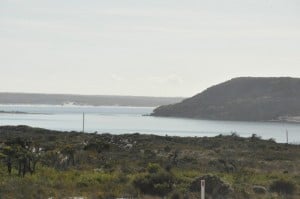 The girls from the school camp woke us up just after 6, and I couldn’t be bothered going back to bed after that! We all slowly got up, and had vegemite on toast for breakfast. After a couple of hot drinks, we spent a couple of hours just sitting around enjoying the campsite. We had been told you could walk across a sand bar to Table Island, so drove around to take a look. Even at high tide, the water looked quite shallow, so we began the walk across. It didn’t take too long, and who can resist climbing something when it’s right in front of you. 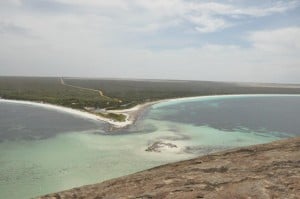 The view from the top

We made the long and tedious climb to the top, only to be met with some of the strongest winds I’ve ever encountered. At one point, I stood on a big rock to take a photo and was instantly blown off! We took a few shots, and began to wander back down. It was obvious the wind had seriously taken a turn for the worst, and we were copping the brunt of it. Our legs were like jelly by the time we reached the bottom of the island, and we walked back across the sand bar, only to be met with the nastiest sandblasting on the beach I’ve had in a long time. I ended up with some sand in my eye, which is one of the most unpleasant feelings you can have! 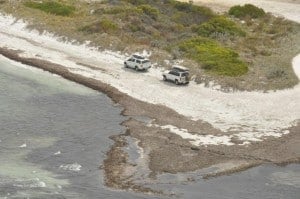 Meanwhile, the wind was picking up

We were glad to get back to the car, and I proceeded to squirt water into my eye with the hope of getting the sand out! It seemed to work its way out after a few minutes, and we headed back to camp to clean up. The wind was tearing through now, and we found both of our Oztents had sort of collapsed at the front. We weren’t expecting such severe wind, and hadn’t tightened the guy ropes up enough. After fixing them up, I pegged a couple of oky straps to the front panels of our Oztent and tightened the guy ropes. The wind just picks the extension at the front of the Oztent up and moves it around. I’ll have to make up some ropes that we can peg down.

Once we had washed the sand off our legs and fixed the tents up, we headed off to find a secluded and calm spot to fish and relax. Yesterday we had seen some big hill climbs which looked like they would be a serious challenge, so we headed back to check them out. I tried to idle up the harder one in 2nd low, and soon found myself spinning the wheels with no forward momentum. I got out, and had a look further up the track, deciding that it wasn’t a good idea to try that one anyway. The track had some weird side angles which went back and forth, and combined with soft sand we wouldn’t have had much of a chance! 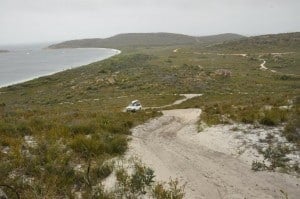 We tried the track to the right hand side, and in 2nd low at 3000 rpm the 80 still bogged down and stopped. It had 2 sharp turns and the soft sand made it very difficult to steer. I tried again in 3rd low, and with the extra momentum managed to make it up without too many difficulties. The Prado was next, and made it up without too many dramas. Lastly, the 3.0 litre GU patrol driven by Daniel, who only made it about half way up. He tried again, with no success. Determined not to be shown up by the 2 Toyotas at the top of the hill, Daniel proceeded to let his tyres down to a more suitable pressure. He made it up without too many issues after that, and we got some great video and photos from the top of the hill. 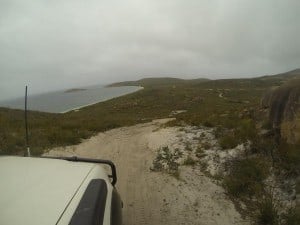 The descent was a bit of fun too, and then we headed off to the 4WD track to a section of the coast that we thought would be protected and quiet. The 4WD tracks were a lot of fun, going over rocks and sandy sections. We ended up on a gorgeous beach about 100 metres wide, with a few steep hill climbs to go down onto the beach. We set the rods up to get some herring, determined to show that you can catch fish in the south of WA! With a bit of burley we had the herring jumping out of the water, and were catching triple headers without even trying. With the water being so clear we couldn’t resist a dive, and decided to leave the kayak on the patrols roof. We swam along the clear, calm and rocky side of the bay. Again, there wasn’t much in the way of fish, but it was a good dive nonetheless! We swam right around the back, where the waves were a bit bigger, and still didn’t see anything. 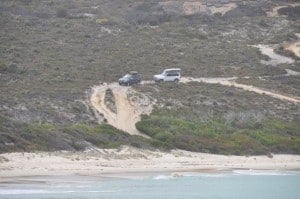 The only way in and out!

Daniel suggested swimming across the bay to the other side, but I’m not sure he realized how much of a swim it was! We made it across after about 20 minutes of paddling, and saw some better country. I shot a small blue groper and harlequin, but other than that the fish life was minimal! We swam back to shore, lugged the dive gear and fish back to the cars, and sat down to eat. After cleaning the fish (and the 40 herring we ended up with), we packed up and headed back to camp. We smoked the 40 herring and sat around, enjoying the peace and quiet (after the school group had gone out on the bus). 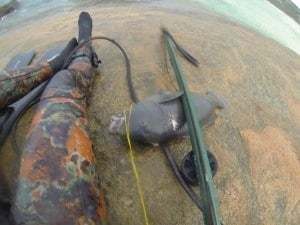 Another groper for dinner