Once we committed to spending a lot more time on the road, we knew our clothes washing was in need of an overhaul. We’ve always just used a 16L stainless steel bucket and manually washed everything, and then rung it out to dry.

Inevitably I’d damage the clothes trying to wring as much water out of them, and we both agreed we needed something better. We looked at a heap of portable washing machines online, and read a lot of comments from owners who had issues with them in one way or another, and weren’t any closer to a solution.

Eventually, Sarah found the Ecospin manual washing machine, and said let’s get that. We’ve been using it now for a number of months, and its time to do a thorough review. 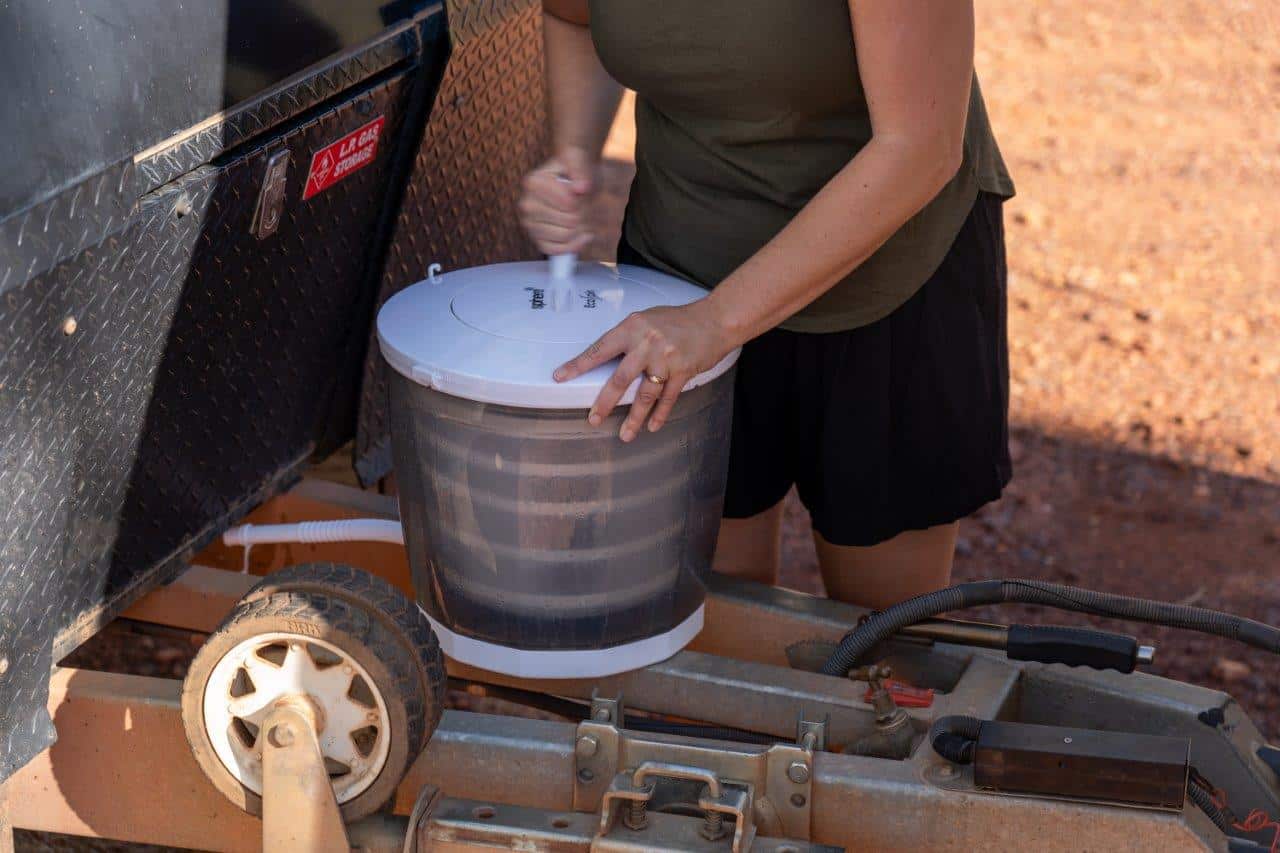 We paid for this

As usual, we like to disclose whether we’ve been given anything, and like most cases, we paid full retail price for the Ecospin. There’s no funny games going on with gifted products, and we aren’t being paid to write anything about this unit.

How do you use it?

Using the portable washing machine is really simple; add water to the maximum line, then add your washing detergent (we use the Earth wool wash as it doesn’t need rinsing) and then a small quantity of clothes. There’s a maximum line for clothes too, and you generally only do a few things at a time.

From there, give it a spin, and let it soak for a couple of minutes. We then remove our clothes and squeeze as much water out as possible (so the water falls back into the washing machine), and put them into our clean stainless bucket. We continue doing loads like this until the clothes are all clean.

We then undo the drain and let the water out, then put some clothes in and spin them until they are dry, and hang them up. If we have a heap of washing you might do 5 or 6 spins for washing and then spinning water out, and then you are done. 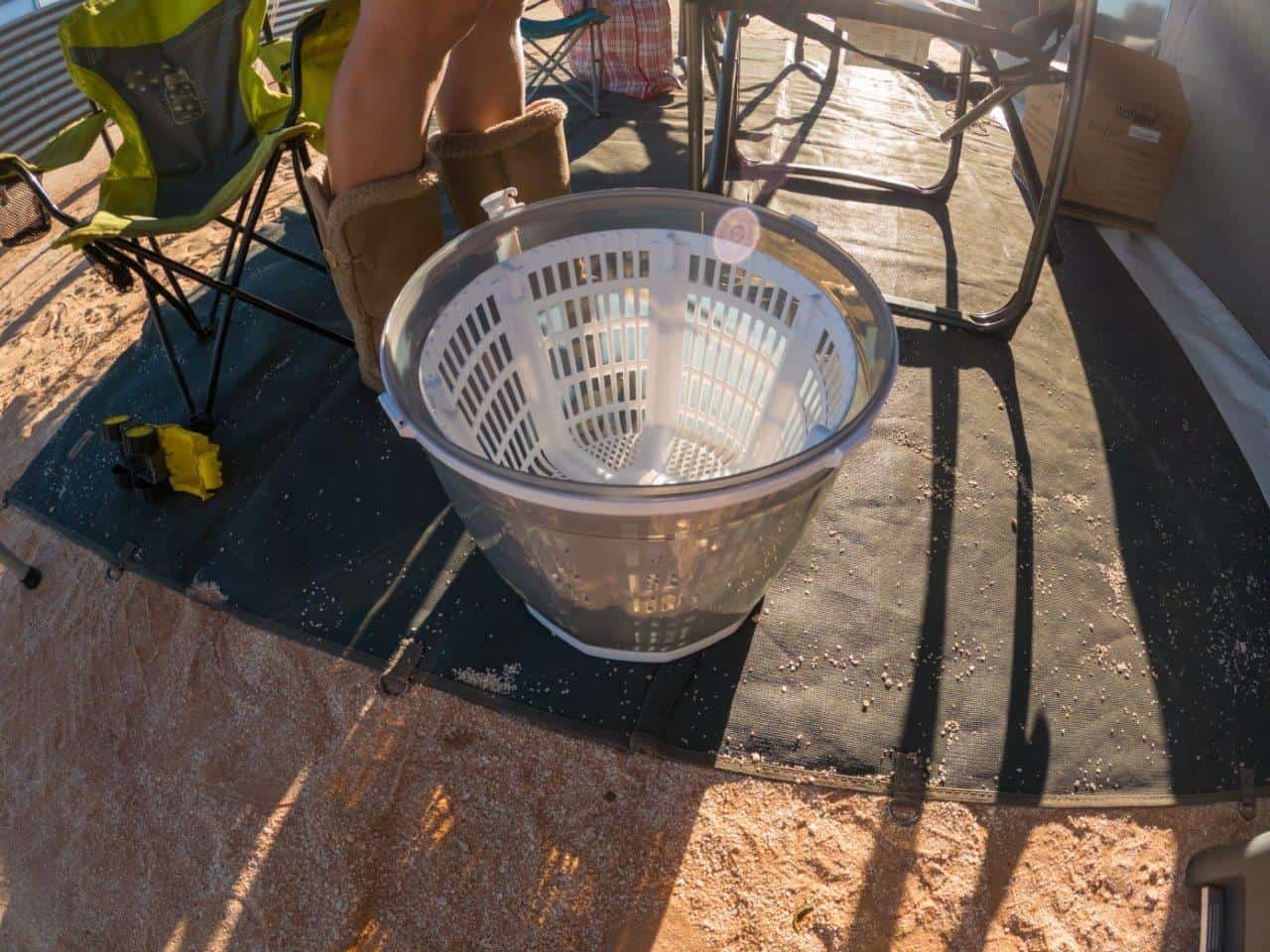 It’s basically a mini washing machine that you power yourself

We keep our Ecospin in the box it came in to give it some protection, and the box is so light it literally blows away on a windy day, with the washing machine inside.

Its dimensions are about 40 x 40 x 40cm and it weighs virtually nothing.

We looked at a heap of other washing machines, and they were starting to get up there in weight and size, which we try to avoid. We have the weight capacity, but we’re pushing the friendship for space.

It actually spins the clothes to dry them

No matter how you wring your clothes, you never do a good job at getting them dry. When its really warm and windy it matters less, but spinning clothes is the only way you really get them nice and dry. By spinning you remove the stretching that happens when you manually wring them out too, which is a big plus.

Yes, I’m sure its not as dry as your home washing machine would do, but for the most part it actually does a pretty good job. 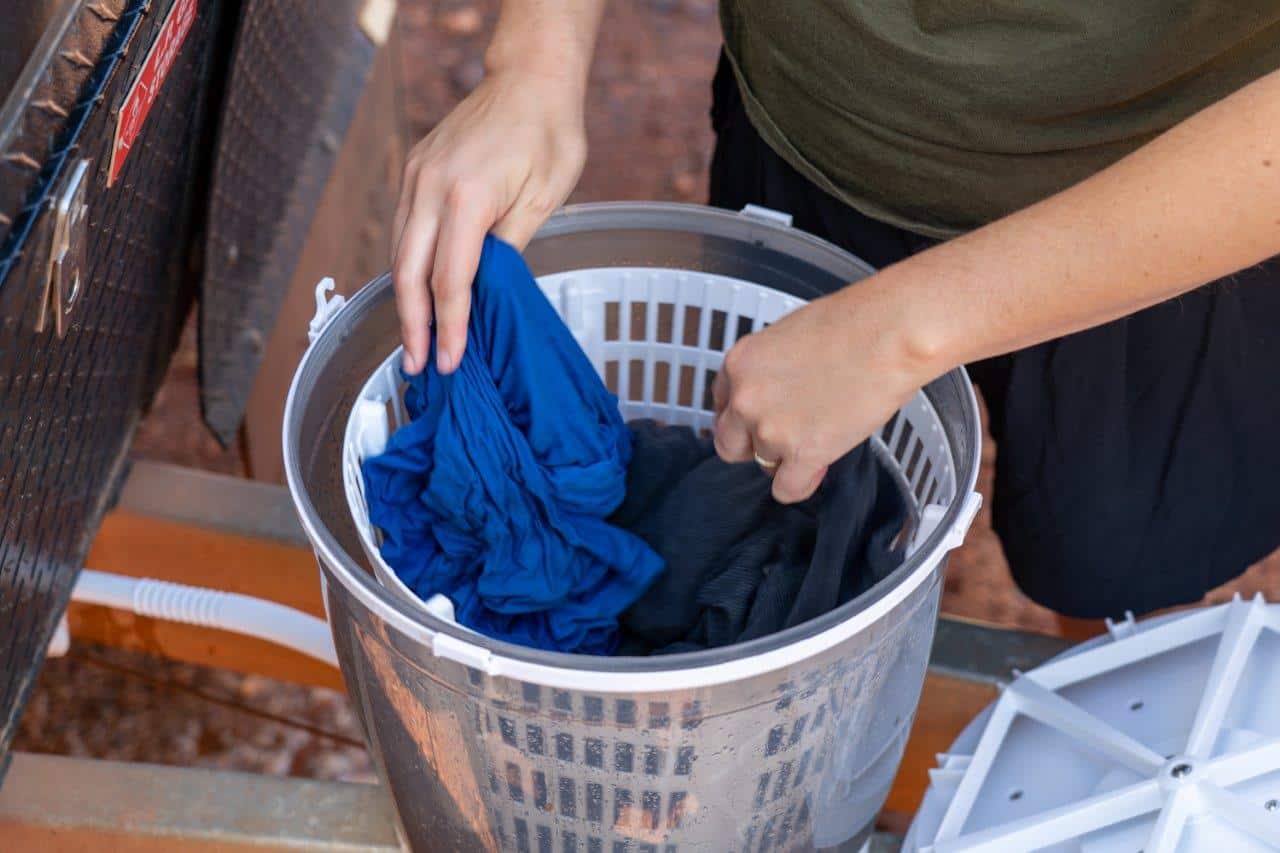 It spins clothes, and does a decent job

There really isn’t much to this little device; its easy to use, simple and really straightforward.

It doesn’t use much water

Another huge plus for this little washing machine is the amount of water it uses. If you fill it to the maximum, you’ll only use about 4 – 5 litres of water.

Some of the 240V portable washing machines use 20 – 60 litres per cycle, and watch out for their wording, as it can be their figure to wash, and then the same figure to rinse. The idea of going through 60 – 80 litres of water to wash your clothes is not really feasible for off grid camping, so this fits in well. 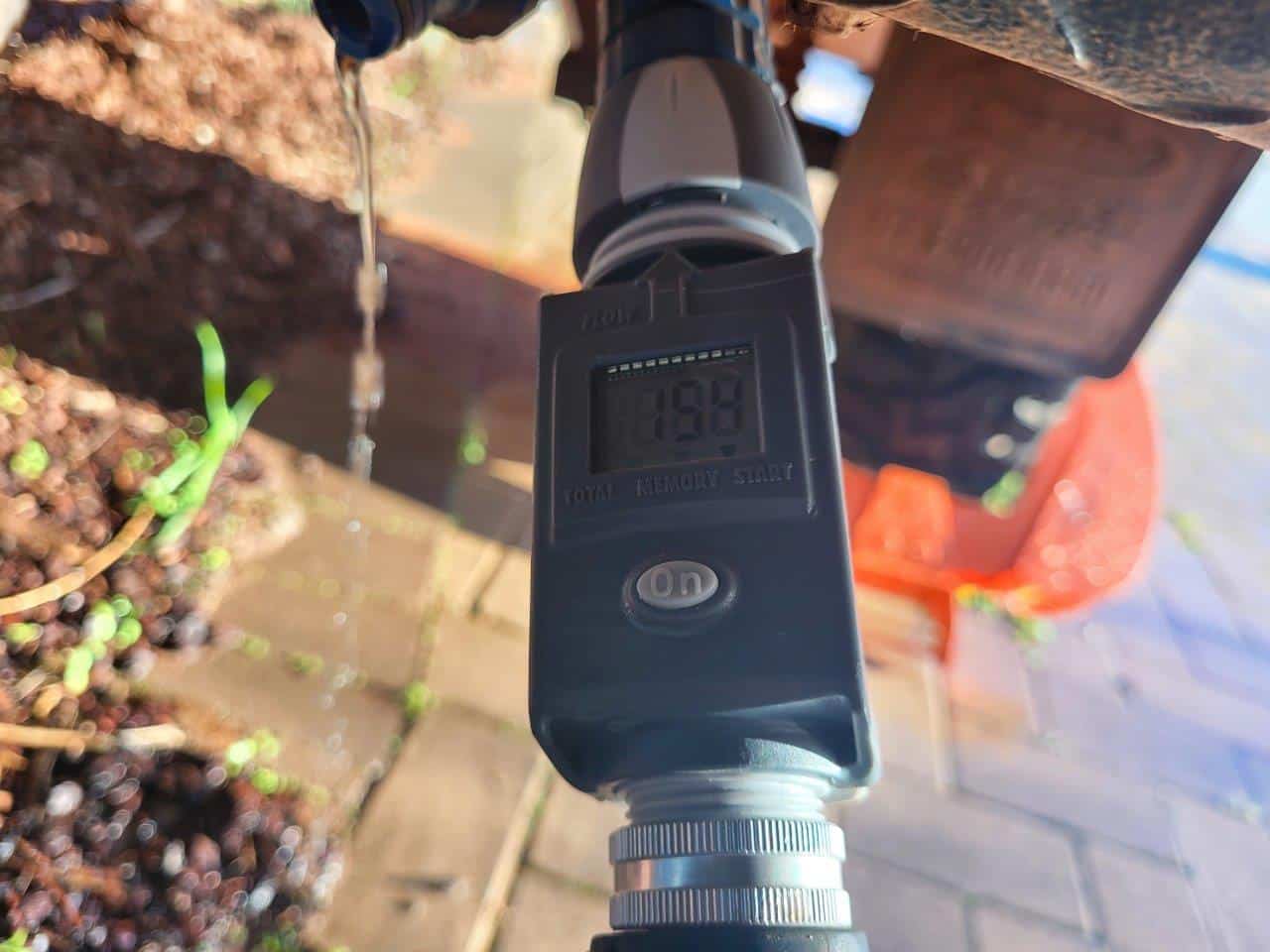 It gives you a work out

Using the portable washing machine actually gives you a bit of a workout. You can do it gently and just cruise along, or get into it to try and spin the clothes as fast as possible for removal of water, and you’ll know your arms have done some work at the end!

We don’t have to pay, or use Caravan Park facilities

In the past, we’ve called into Caravan Parks purely to have a good shower, and do some washing. I’m sure we’ll still do this from time to time, but having the washing machine means we can do the washing more often and avoid going to Caravan Parks, which we prefer. 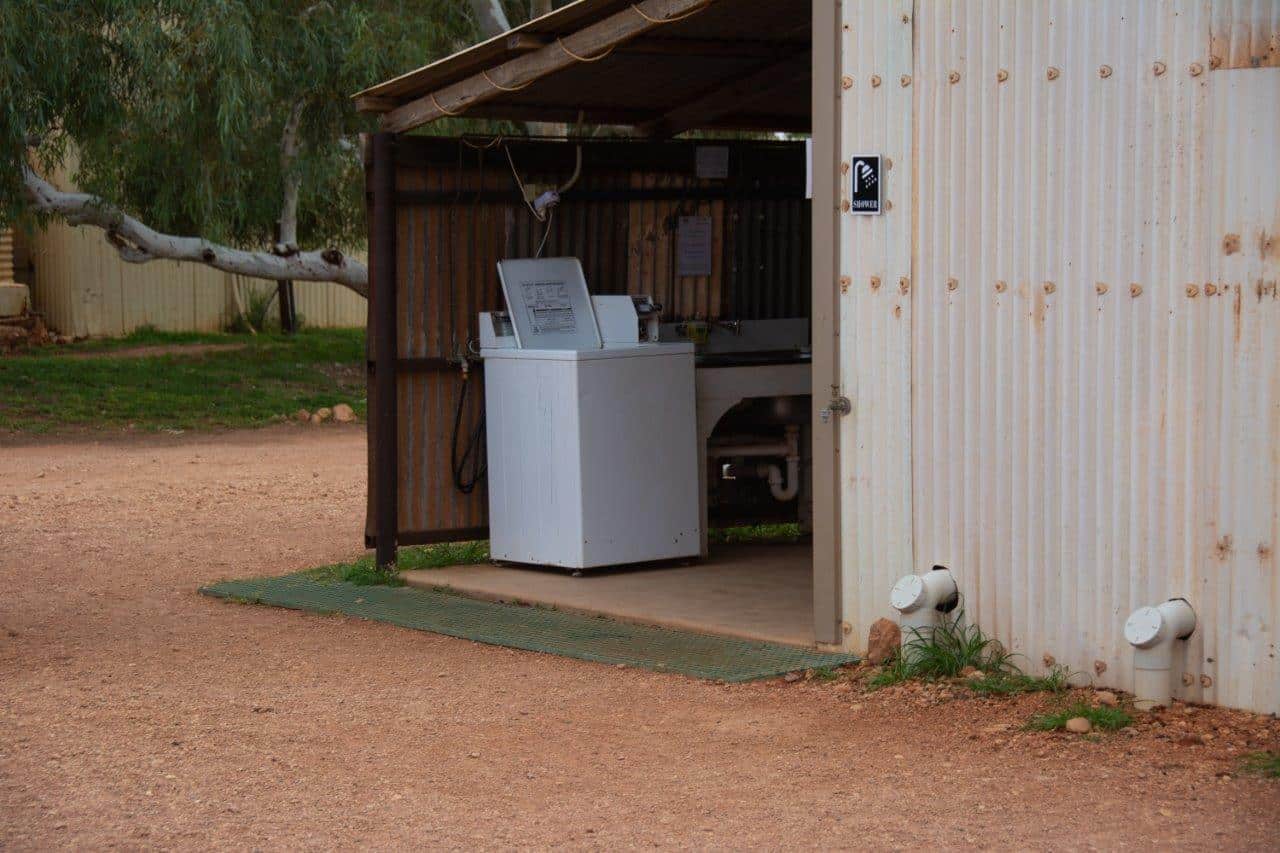 Paying for washing machines will add up really quickly

You can do a load of washing in about 10 minutes with this, and whilst the loads are quite small, its perfect for doing a days washing quickly, and not wasting a huge amount of time, water and energy getting it done.

There’s no doubt that these are not built overly tough. My main concern is the gearing mechanism inside the lid that makes it all turn, as I’ve heard that the gears aren’t too strong. However, providing you are careful with starting and stopping the unit, and you use it with a bit of respect I reckon it should last a fair while.

I said to Sarah that the ideal portable washing machine would be a stainless version that you could operate with a battery drill, but I’ve not seen one yet, and the stainless option that I did find was about $600, so a massive jump in price.

It doesn’t hold much

Yes, the unit is small, and that means it doesn’t hold much in the way of clothing. The more you fill it the worse it washes and spins too, so its a double edged sword. You are better off doing lots of smaller loads, than trying to push the friendship.

It’s easy to get unbalanced

I did find a number of times that the unit gets unbalanced when you are trying to spin water out, and this causes the whole thing to shake around, walk off your table and in general makes the washing annoying. Generally you can just open the lid and move a few things around and make it good again, but it doesn’t always work this way, particularly with heavy items like jumpers and towels. 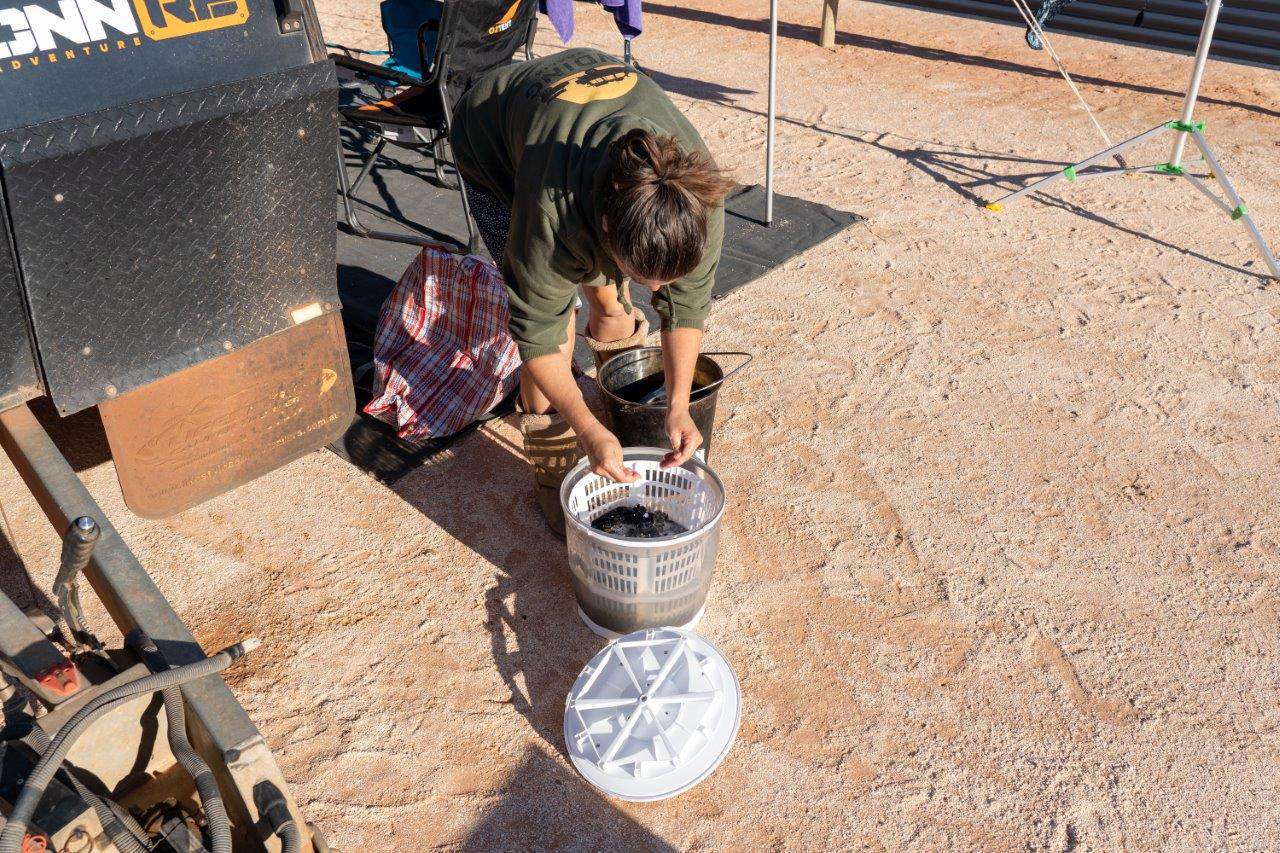 It gets unbalanced really easily, which is annoying

Your clothes wont wash as well as at home

Inevitably, your clothes probably don’t wash as well in this as they would at home, but we are fairly happy overall and can’t really complain. We’ll have to do some comparisons between it and other portable washing machines!

You have to do washing often

Sarah’s idea behind this washing machine was that we’d do a couple of small loads every afternoon (or every second) instead of doing big loads a couple of times a week. So far it seems to work pretty well, and it fits in well with chill time around camp in the afternoons!

Overall, this thing works fairly well. It is absolutely flimsy, and I recall saying to Sarah that I wasn’t sure how it would go long term, and I’m 100% certain its going to break soon. I did just recently snap the handle that you use to spin it around at the base.

I’ll admit to not being 100% kind to the unit, but you have to give it a bit of curry to get it to spin properly, and if its not going to last with our full time use, its no good to us.

I’d get it if you want something light, easy to use and are prepared to accept that it isn’t going to last a lifetime. I’m positive it will break in the coming months of our lap of Australia, and then we’ll return to the drawing board for something else.

We have the 240V power (and water) to run a different unit, but just can’t seem to find anything light enough, and durable enough to take with us. If you know of something, please let us know!