South Australia has some of the most incredible 4WD tracks in the country, and we’ve thoroughly enjoyed exploring as many of them as we can find:

Some of the first 4WD tracks that we did in South Australia were in the Fowlers Bay region. We had an amazing afternoon driving out to Point Fowler, heading through the dunes and then watching huge sea lions in a protected bay. Fowlers Bay is a magic place, and well and truly worth a look with a 4WD. 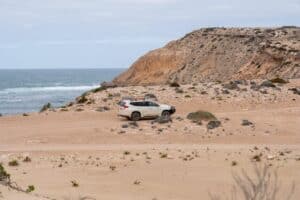 We spent 3 nights soaking up Scotts Beach, and thoroughly enjoyed the 4WD tracks around the place. You can head East towards Fowlers Bay, or West towards Mexican head and a heap of other stunning locations. The coastline in this area is nothing short of spectacular, and so worth a visit. 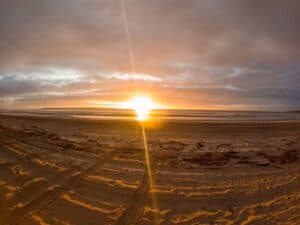 One of the most well known beaches in South Australia has to be Perlubie, and we had an amazing stay there, despite some really strange and rainy weather. You can head up the beach for quite a distance, and enter on either end. Make sure you let your tyres down though, or you’ll end up like us; well and truly stuck! 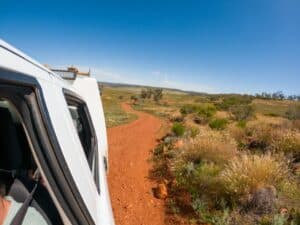 The Gawler Ranges National Park is surprisingly big, and has a heap of 4WD tracks to take you around it. The views, and hikes here are fantastic, and whilst the 4WD tracks are nothing overly serious, they are worth doing just to explore the park and see its history. 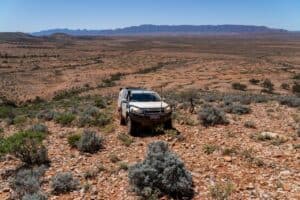 Our first 4WD track in the Flinders Ranges was at Mern Merna Station, and took 3 hours to complete. You have to pay to access the track, but it really surprised us, and the views were nothing short of stunning. We did lots of other tracks in the Flinders, and still rate this as well and truly worth doing. 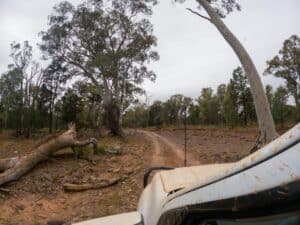 Another paid 4WD track in the Flinders Ranges takes you to Ferguson Gorge. This track is less difficult, and you are paying more for the access to the gorge, but its a stunning drive with a great walk at the end to Ferguson Gorge. 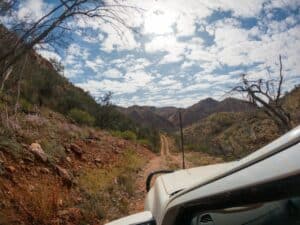 I was shocked at how good Arkaroola was, and a huge part of it is because of the massive array of 4WD tracks that are almost entirely free. Not only is the scenery next level, but some of the tracks are guaranteed to give you a fair old work out. We had a heap of fun exploring them in the Dmax, including the paid Echo Camp Backtrack 4WD track, that was nothing short of spectacular, and might even be the best 4WD track I’ve ever done. 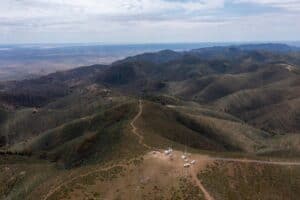 I was certain that nothing was going to beat Arkaroola, until we visited Argadells. This was our final location in the Flinders Ranges, and the 4WD tracks were shockingly good. The drive to the top of Mount Arden had me picking my jaw off the floor a number of times, with huge rolling hills that were absolutely magic. 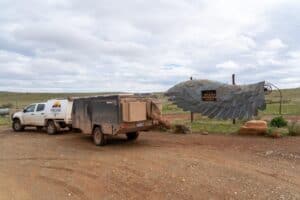 Asides from being known for unbelievably immaculate camp sites, Willow Springs has a big reputation amongst 4WD owners for its Skytrek 4WD track. This takes around 7 hours, and despite being super keen to do it we arrived as the track had been closed, and missed out.

I’m told this is similar to Argadells, but given it’s a 7 hour track, it takes a fair bit of time and commitment. I’ve not heard too many people say they didn’t absolutely love this, and we found the bush camping at Willow Springs up there with the best in the Flinders Ranges, so it doesn’t surprise me one bit. 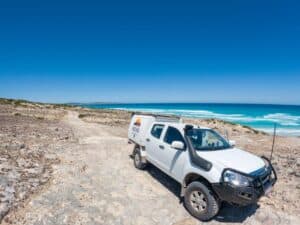 We love a good coastal 4WD track, and one that has views that will blow your mind is always raved about. Wanna to Sleaford is exactly that, with some views that rivalled the best of what we’ve seen anywhere in Australia. The first beach that you can see from Wanna West lookout is 4WD accessible, and takes you to the most beautiful little cove you’ve ever seen.

We had lunch here, before heading back up through the dunes and along to Sleaford. All of the stops along the way are worth a quick sticky beak, with the coastline here nothing short of magic. 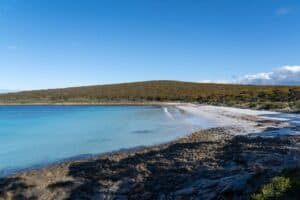 No trip to the Lincoln National Park would be complete without staying a night or two at Memory Cove. This is at the end of a fairly long, and slow 4WD track (its 2 hours from Port Lincoln) and you need a key to get in, with an online booking completed for camping.

The track itself is nothing overly complicated, but its seriously rocky, rough and slow, and goes past a couple of lookouts and various attractions on the way in.