How close should you camp to others?

I often see posts online of people complaining that others arrive at camp and set up too close to them, and up until now haven’t really experienced it for ourselves. Our kids probably make too much noise, but we certainly pick places that make it harder for others to camp on top of us.

Either way, we finally got to spend some real quality time next to others at Rapid Bay in South Australia. If you aren’t familiar with this place, its absolutely stunning, and one of the most scenic places you can camp in the state. That of course means that come school holidays, or the Christmas New Years time frame it gets really, really busy, and things can get a bit squishy.

We booked two nights, and arrived and met Wayne (an amazing caretaker) who checked us in, and gave us plenty of options to pull into and set up camp. I drove around once, and then hopped out to have a walk to an amazing spot overlooking the beach.

I met both neighbours who were both very welcoming, and said we’d be fine to put our two vans in, despite me wondering if we’d be too tight. The one closest to us said they were leaving in the morning and didn’t mind how close we got, which was very kind of them.

We set up, had an awesome day and although I was feeling like we were too close to others (as we normally don’t visit hugely crammed campgrounds), but took comfort in the fact that both of our neighbours were happy and had invited us in. 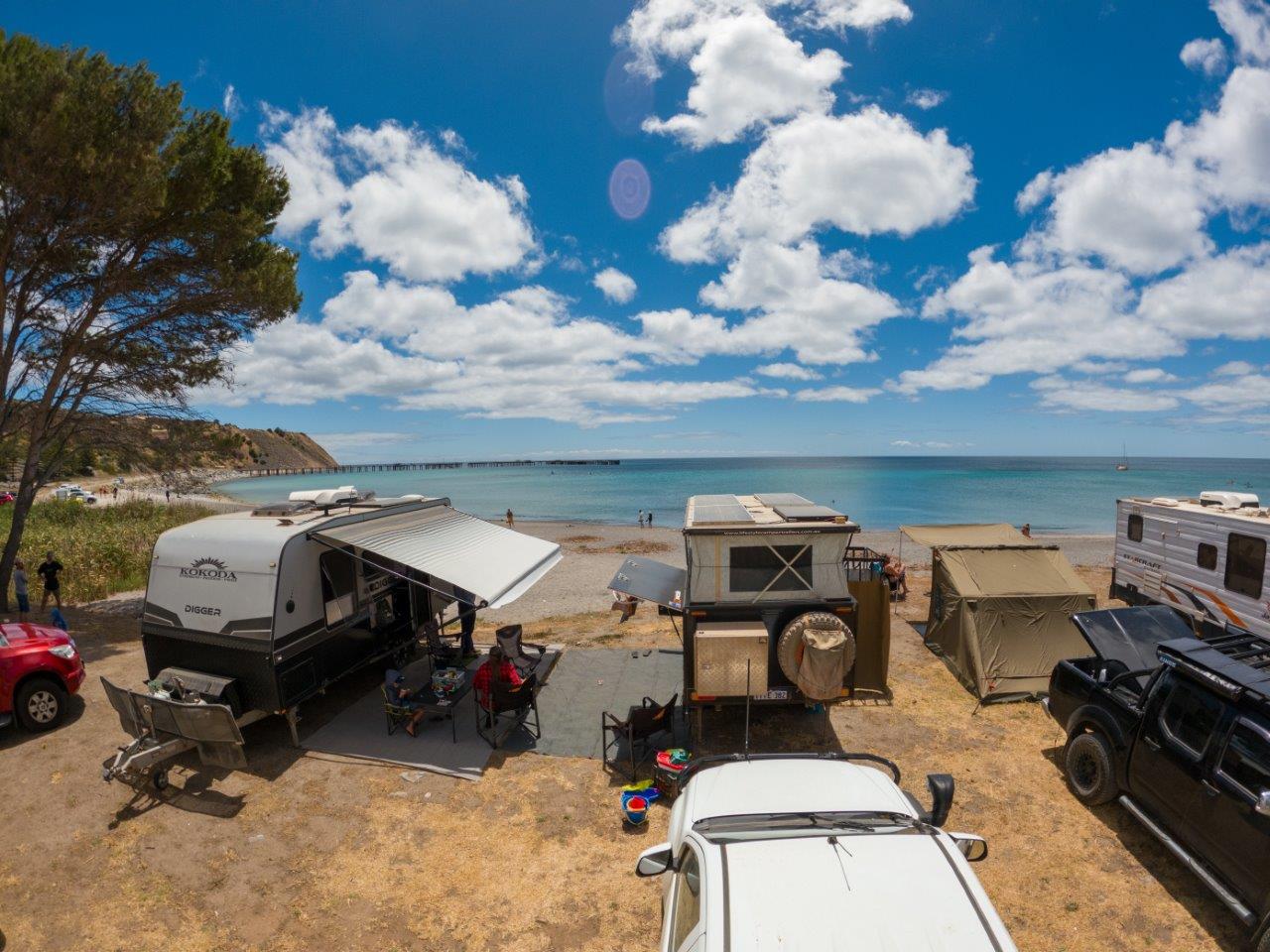 I felt too close to our neighbours the first night, but they were happy about it

The next morning, the neighbours on our side packed up, along with two other vans which left a big gap on the prime real estate, right on the beach front of Rapid Bay. We had breakfast, and headed out to Cape Jervis to watch the ferry come in and show the kids the cars coming off and going back in, and when we came back to camp I was expecting new neighbours. 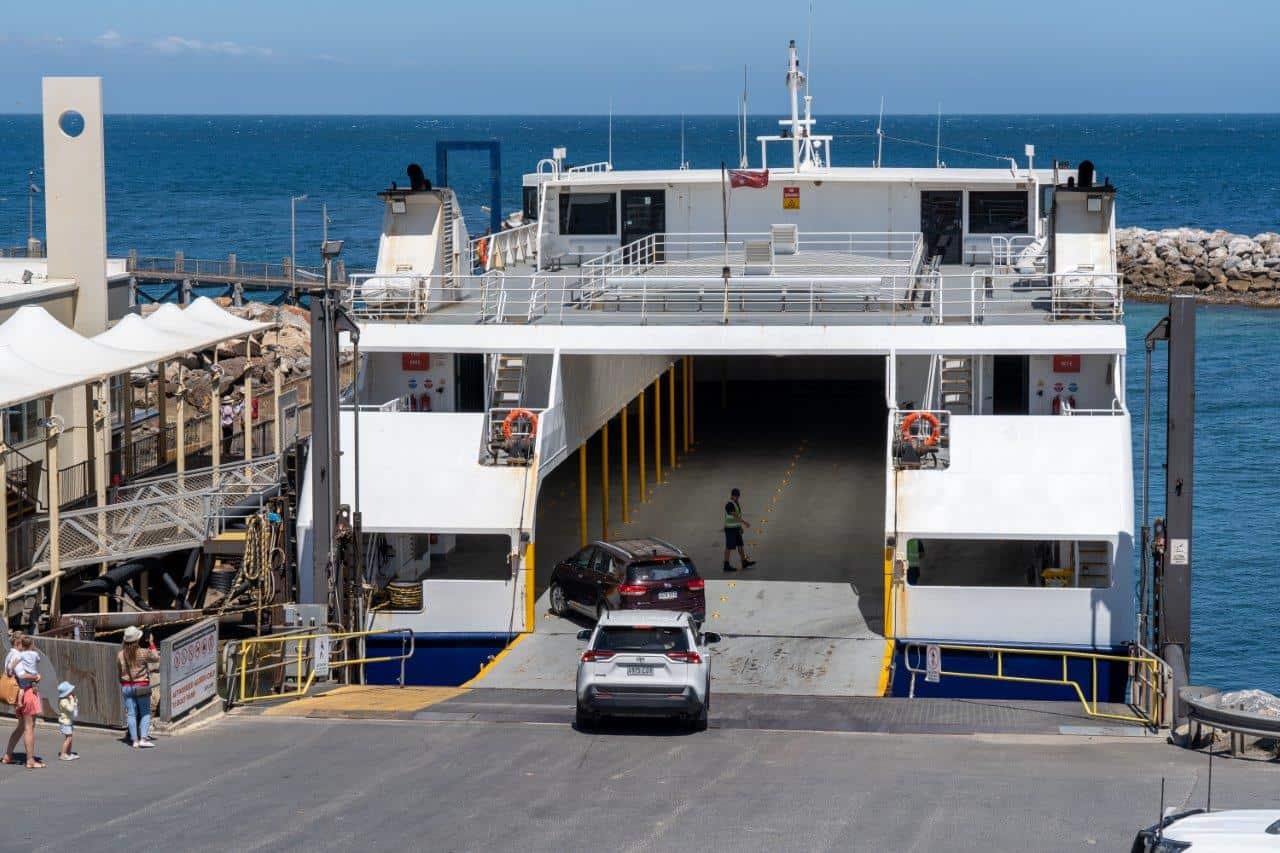 What I didn’t expect though, was for them to be so close to me, to the point where I wasn’t sure whether to laugh, or get really angry.

I want to paint a picture here, so you know how we set up, but you can see in the photo below (and the first one too). Our van was driven in with the drawbar pointing the beach, and my folks van was pointing out the other way, so we faced each other. 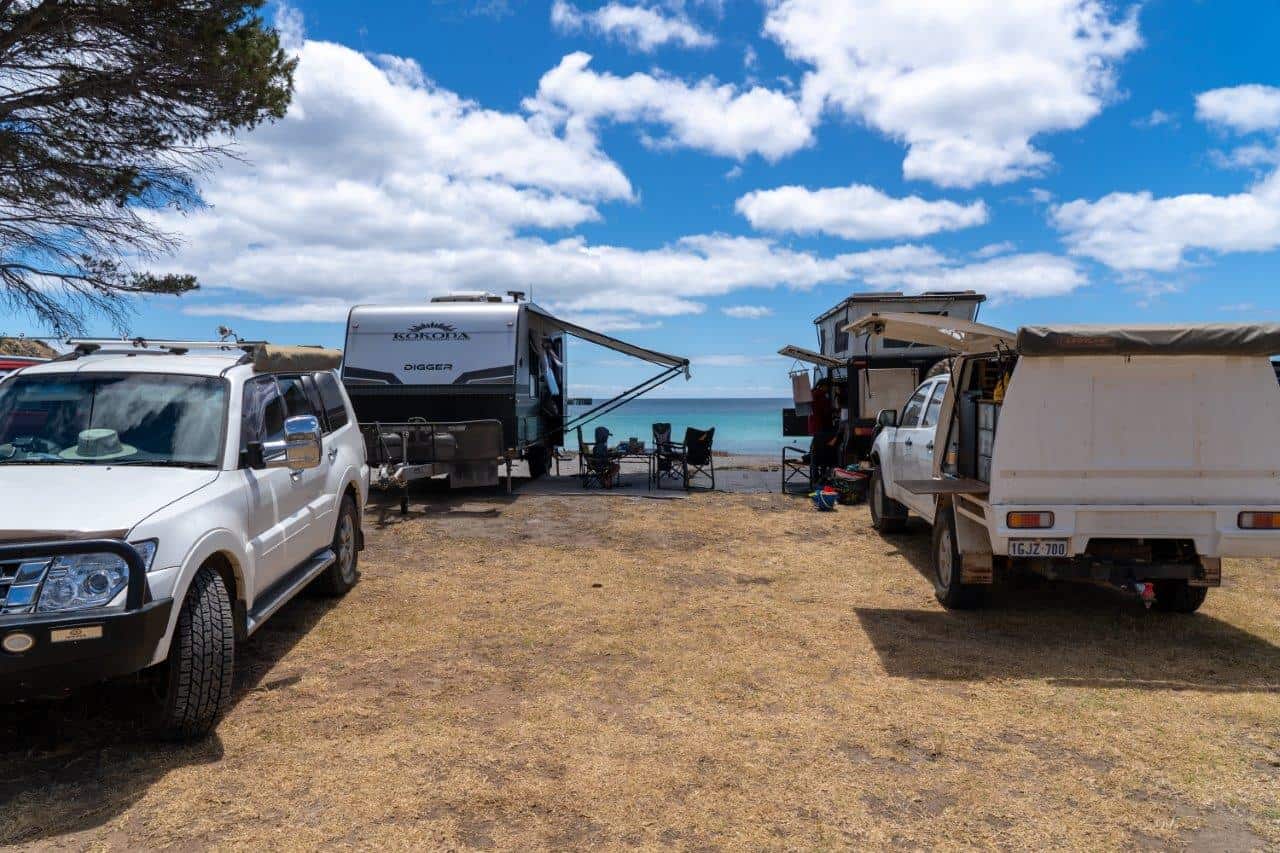 Our camp site at Rapid Bay, which required me to back the hybrid camper out

There was enough room for me to drive the car in, hook up and reverse out without any issue (with my folks van awning retracted), except when we arrived there was a tent set up within about half a metre of the back of our camper trailer, blocking our car park location, and a camper trailer that was less than a metre from the side of our hybrid. 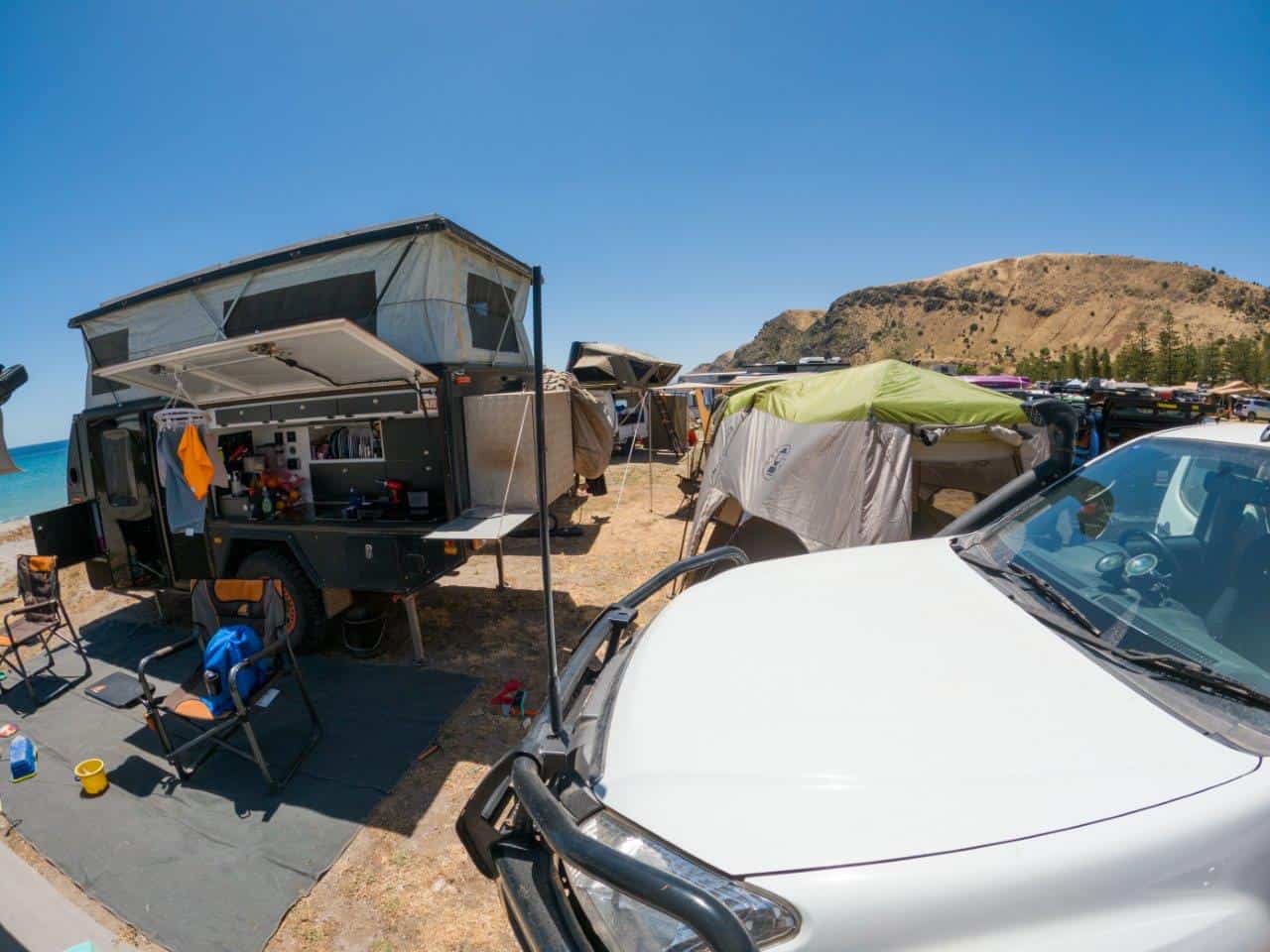 A tent was set up right behind us, blocking us in and with about half a metre gap 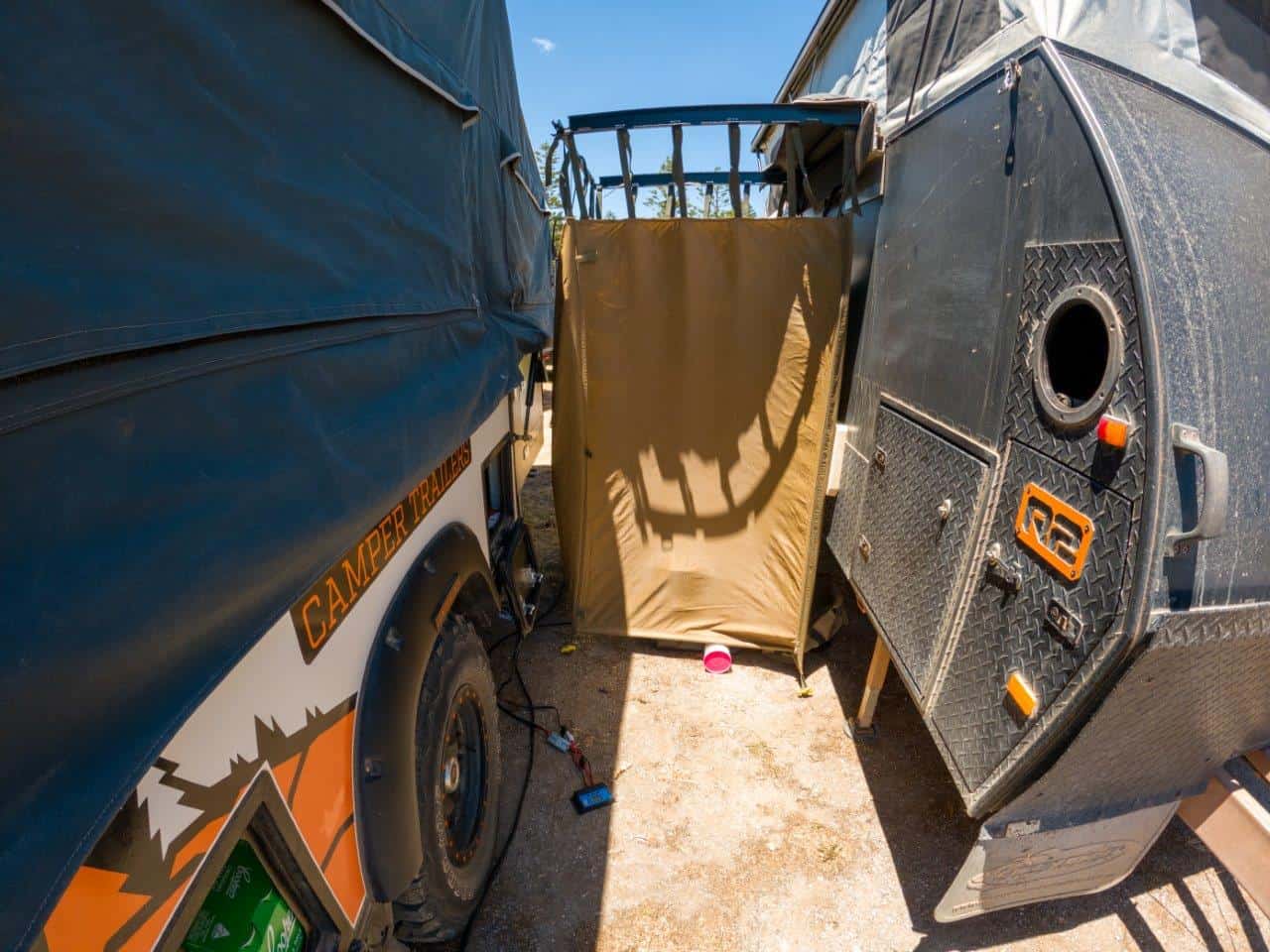 I could see Sarah was fuming, and I wasn’t really sure how to react, but we pulled up (within about 30cm of the tent), and hopped out, wondering how on earth anyone could possibly justify camping so close.

A girl walked over fairly promptly, and said ‘this is my tent, if you need to get out let me know and I’ll move it’. I muttered something about them being awfully close to us, and then went around to see if I could still put our toilet tent out (which I’d put away the previous night to stop it flapping around, but the toilet and tent pegs were still in place).

With the toilet tent out, it was just touching the camper trailer next to us as it flapped, who was a part of the group. They seemed somewhat apologetic, but I was bewildered that you’d set up so close to someone, especially without seeking permission. Granted, we weren’t there, but it wasn’t as if there was any room lacking on the other side of them to move over a bit.

Sarah was pretty annoyed for some time, and I decided to laugh it off as I wasn’t sure how else to react. The most ironic thing after though, was that when I returned from taking my youngest to the main toilets they’d unpegged the tent, moved a car and put the tent in a far more sensible location, giving us the ability to reverse out again the following morning without having to ask for a tent to be moved.

Why that wasn’t done to start with I’ll never understand. There was also room in front of the camper trailer to put the tent, so its not like this was their only option. I get the feeling it just wasn’t thought about too much.

After the warm welcome I had received from our two neighbours the previous night I had promised to myself to be as accommodating of others who wanted a spot the next night, but this was taking it to a whole new level.

At the end of the day it really didn’t cause any issues, but having a shower outdoors, when you can touch your neighbours camper trailer was a bit of a weird feeling. 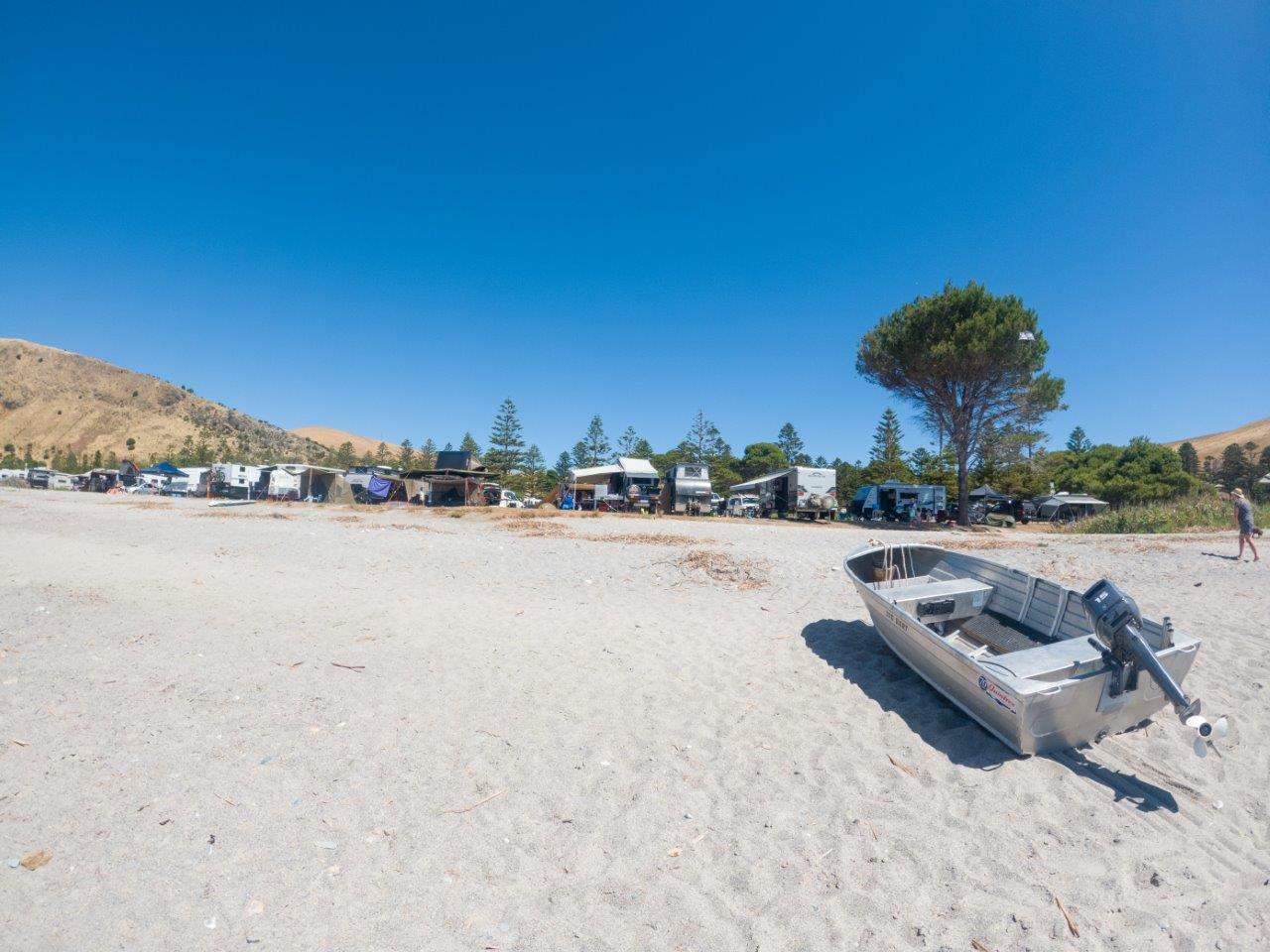 Despite the amount of room available, we were camped on top of

We got on OK with our neighbours after this, but it was certainly an awkward way to meet new people camping right next to you!

So, how close should you camp to others?

I’m not sure a specific measurement applies here. Instead, lets make some general comments. If you are not in a place with designated camp sites, camping really close to someone else is going to put you into a grey area.

Of course, it all comes down to the situation; some camp sites have vans almost wall to wall, and that’s just the way it is. If there is room to spare though, the more distance you give, the nicer it is for your neighbours.

If you need to camp this close, you should be approaching the campers to see if its OK. If they aren’t there, you shouldn’t just set up and hope for the best.

If you intend on making lots of noise, or you have young kids, camping near others is not very sensible. If others choose to camp near you then that’s different, but be respectful of others when you arrive at a camp site.

If you roll into a massive camp ground with room everywhere and choose to camp within 10 metres of another camp site you’ll probably upset someone.

What do you feel is too close for camping next to others?