What is a UHF Radio?

A UHF Radio is a communications device used by many businesses for truck driving as well as those who need a good way to communicate for recreation. A UHF Radio is one of the more common pieces of technology found in four wheel drives, and for good reason. Having a good way to communicate with people that you are traveling with and to call for help (in the case of something going wrong!) is a great idea. These function only with the use of a UHF Radio Antenna.

To pick up a decent UHF Radio and antenna you are looking at around $400 AU, but it depends on what features you want. It might not be the best UHF radio, but it won’t be rubbish.

I delayed getting one of these, but as it turns out they are one of the best 4×4 Accessories you can spend your money on. They are one of the more common modifications found in 4wd Vehicles, along with the Long Range Fuel Tank. Remember, you can always pull them out if you change vehicles and take them with you; its not that hard! 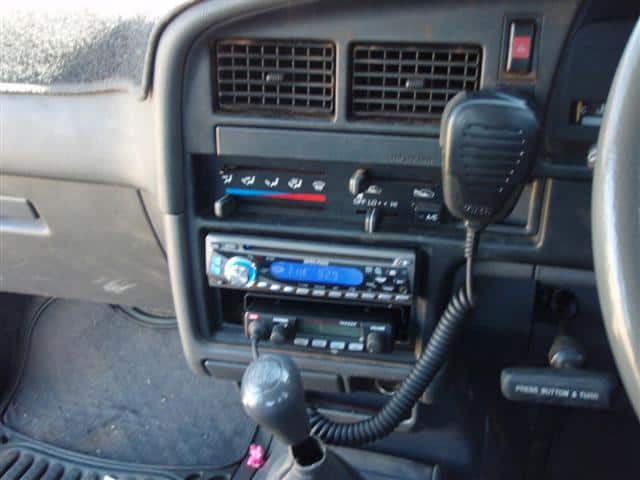 UHF Radio in My Hilux

The UHF Radio Antenna’s are in many cases more important than the radio itself. You can get UHF Radio Antennas that are designed for flat ground and those that are designed for steep hills and mountains. Unfortunately, you won’t get an antenna that is exceptionally good at both. Some people will have two mounted on their vehicle so they have the best of both worlds. UHF Radio Antenna’s are usually mounted on the bulbar, roof racks, rear bar or off a clip in the bonnet. Make sure that you get a high quality one as they are likely to get hit by a branch at least a few times in their life! Most Bull Bars come standard with holes that you can mount the antenna’s on, or you can buy adapters to mount them on. ARB Bull bars come with holes pre drilled for both spotlights and the radio antennas.

There are a number of UHF Radio manufacturers. Some of the more common ones include GME, Icom and Uniden. By searching on some of the four wheel driving forums you will soon find out what models perform well, why they perform well and basically what is good value for money. Obviously you need to match the price with what you want it to do. For remote touring across Australia, you are going to want something with extreme reliability (although satellite mobile phones are becoming more popular too).

Probably the biggest shortfall of a standard ‘in car’ UHF Radio is the cable that it is attached to! If you want to get outside of the vehicle and direct someone then a Portable UHF Radio can be very handy. These are also very handy for working in large factories, for various sports and many other types of recreation. I originally started off with a Portable UHF Radio for everything related to four wheel driving, but they are unable to transmit more than a few kilometers, they are not usually as clear and of course they run out of batteries, and then you are in trouble. However, they are very useful at times, and I will always carry one with me when I go off road.

Installing a UHF Radio is relatively simple, as long as you have a little bit of electronic experience and are willing to give it a go. You need to come up with a location for the unit to sit. Some will fit in well near a CD Player, or you can mount it on the roof console. Be aware of where the cable is going to hang though; if it is in your vision then it is not only dangerous, but highly annoying.

The wiring from the antenna to the head unit is relatively simple (although running it through the fire wall can be a bit of a pain. The power can be connected either straight to the battery, the cigarette lighter or even another source of power. Everyone seems to have different opinions on what you should do; so read up on it.

In my experience, the cheapest place to get a UHF radio is going to be when a four wheel drive (or electronic/communications) shop has a big clearance, or when you buy online. Most of the time the radios will come with the same warranty, and all you need to do is price up the model (s) that you are looking at. UHF Radios on eBay are often very cheap, but make sure you get a well reviewed model!

A lot of people get a UHF Radio installed, and then have no idea how to use them. There are actually a few laws which will result in fines if you are using them incorrectly (and get caught), so make sure you know them! What is just as important as this though is that you show courtesy to others on the different channels. There are 40 channels in total that are used on a UHF Radio.

•    Channel 5 can be used by anyone, but only in an emergency situation

•    Channel 9 can be used for conversations

•    Channel 10 is used for 4WD enthusiasts, convoys and Clubs in national parks

•    Channel 11 is a calling channel. This channel is used to call or locate another channel. Parties from here can switch to another channel to continue their conversations.

•    Channel 18 is used for Holiday makers communication (for example; when they are in a convoy)

•    Channel 31 – 38 are received by a repeater and re transmitted on channels 1 – 8 to help increase the distance that communications will work.

•    Channel 35 is also an emergency channel

•    Channel 39 can be used for conversations

•    Channel 40 is used for Highway communications (same as Channel 29)

A UHF Radio is a very handy item to have in a vehicle both in terms of communication between people and from a safety perspective. I would recommend this as one of the first items that you should purchase if you start going four wheel driving! A lot of people get these when they are towing a Caravan, Boat or Camper Trailer as it allows other people to talk to them whilst they are traveling, and makes it safer to overtake (a common practise is to stick a sign on the back of your trailer with the channel that you keep the UHF on).