There are a lot of amazing head torches on the market these days. I’ve only ever had two – a $5 heap of rubbish from a local camping store which lasted a couple of trips and barely lit up your hands, and one that I got off eBay, running a nice, big CREE LED.

I don’t think I’ve ever mentioned anything about the head torches, perhaps because like a lot of cheap eBay gear, I figured they’d probably not last long. The actual head torch was about $25, but after nearly 7 years of use, I reckon they are fantastic. I fact, we’ve actually had two more for at least 3 years and none of them have been problematic. 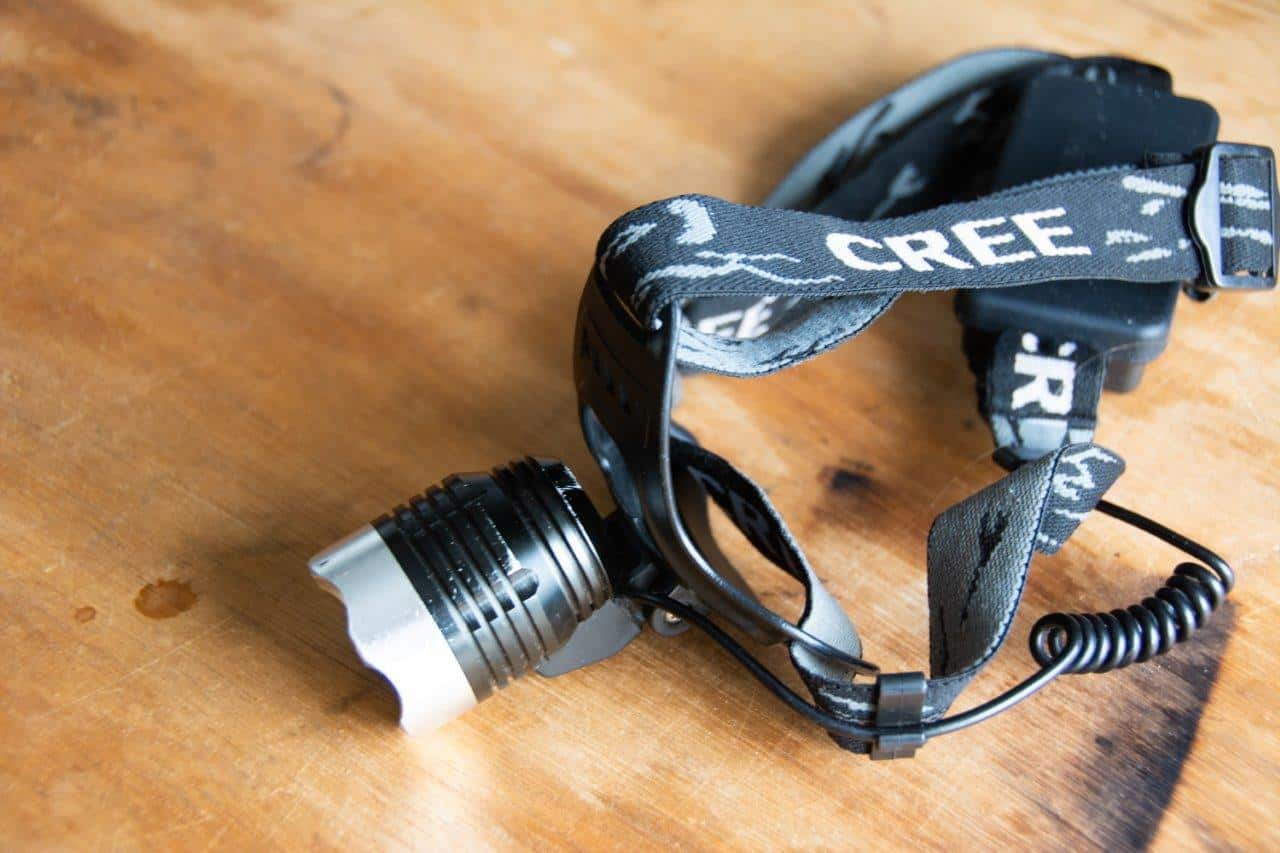 A good head torch is one of the best camping accessories

The head torch is not the smallest of things, and has a fairly large battery pack on the back that houses two batteries. Some people might complain that its a bit too big, and a bit too heavy, but it does us just fine.

I know you can buy some amazing LED Lenser head torches, and I’ve even used a few on different tours, but these do the job and cost us next to nothing, so we’ll be sticking with them for now. 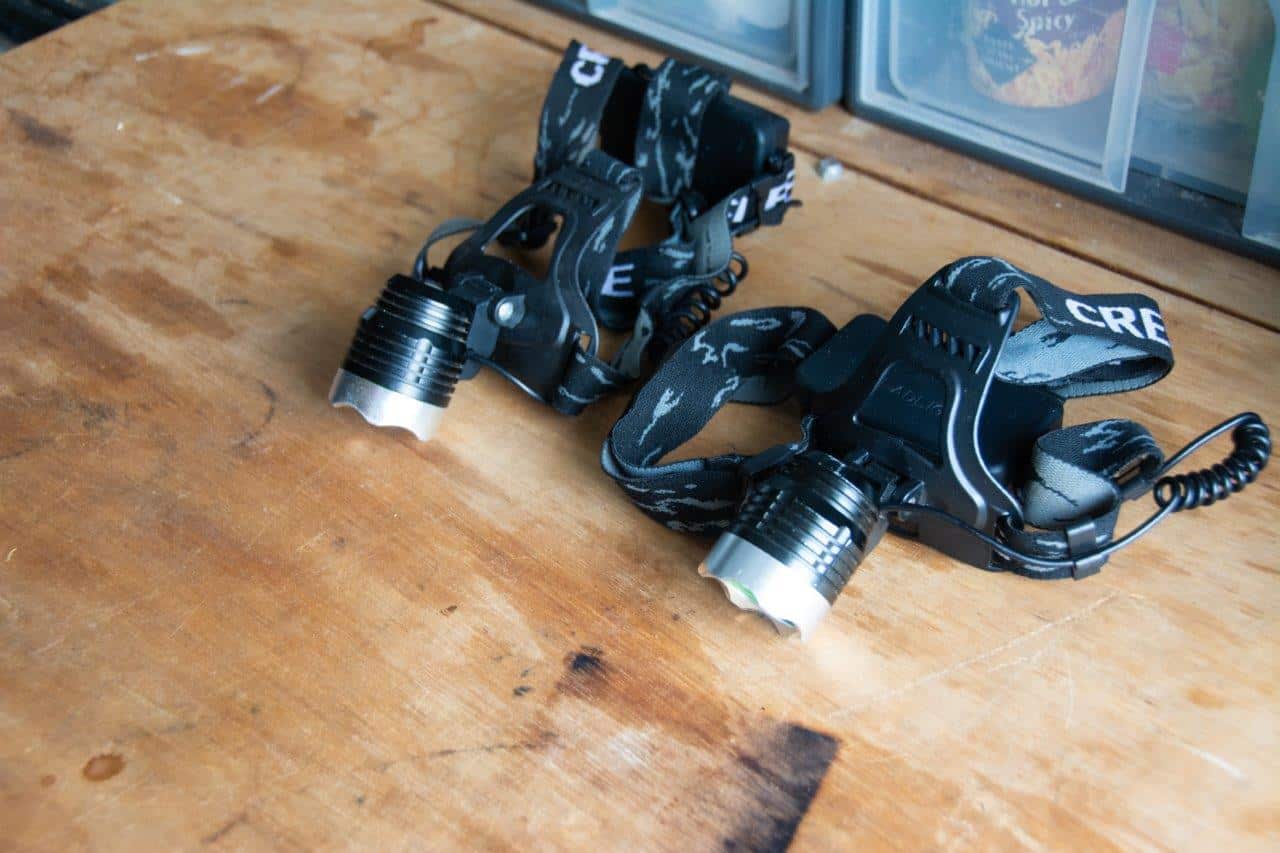 It’s got 3 modes; insanely bright, bright and flashing. I’d love to be able to dim it a little but, I’ll live with what I have. To change the modes, you just hit the power button, on the back of the actual light itself.

They are too bright in some circumstances; if you want to read a book, or speak to someone else, you really have to point it away in another direction. When fully charged, these will easily light up a tree 150 metres away, which makes it fun for spotting wildlife and having a good look around at night.

I really would love a dimming function, or the ability to have it much lower for putting our toddler to bed, or reading a book, or speaking to someone else in the dark. 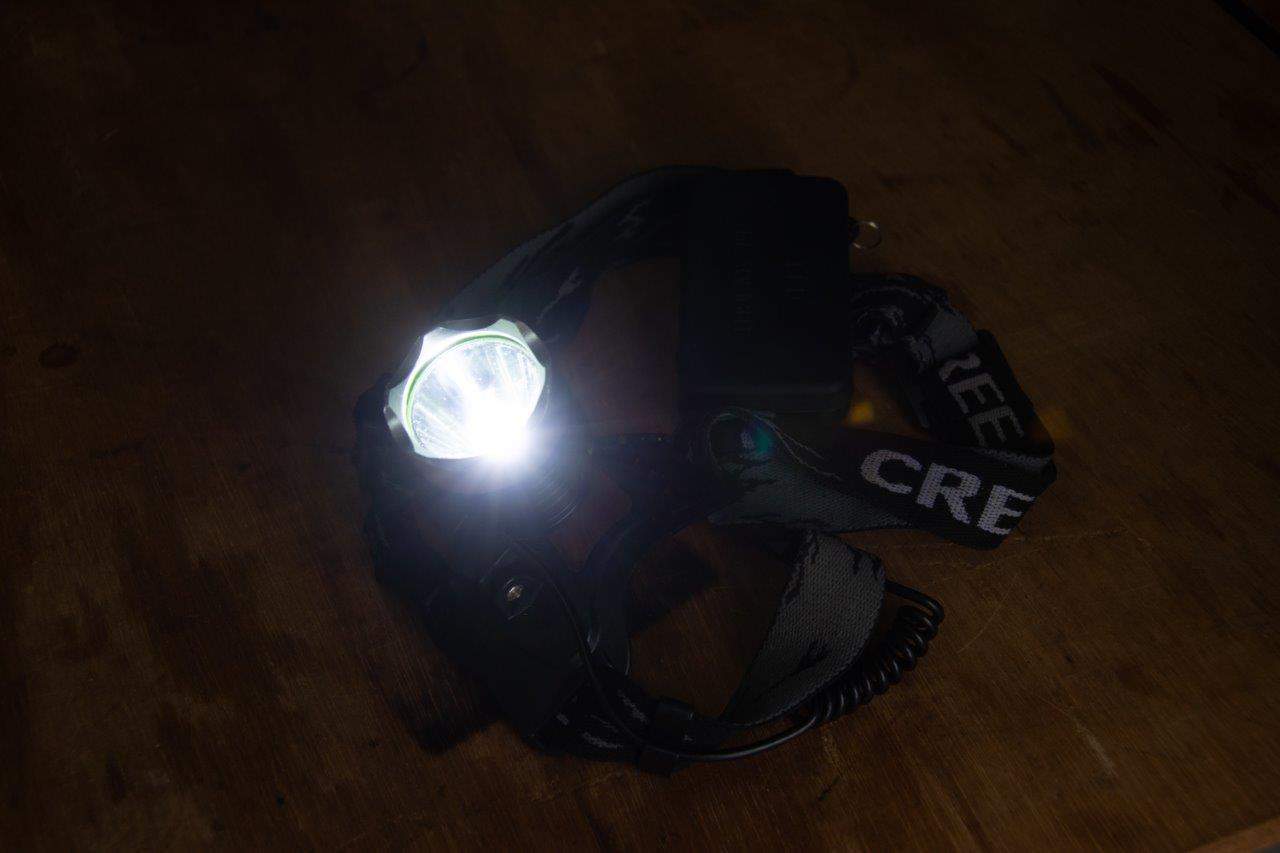 These are insanely bright and can be used for spotlighting

These head torches run the normal 18650 blue, or red batteries that are rechargeable. You can buy them off eBay for next to nothing, and I’ve yet to have one die; they all work, and work well. (EDIT – after coming back from our recent 6 week trip I had one battery fail, which was causing the torch to flicker and not work properly, but its the first to fail for us, ever).

We now have about 16 of the 18650 batteries, accumulated over time. On a big trip, we will use the spares up, then charge them all on a day where we are sitting around camping doing very little. You can charge them from 240V power, or from 12V via a cigarette plug. 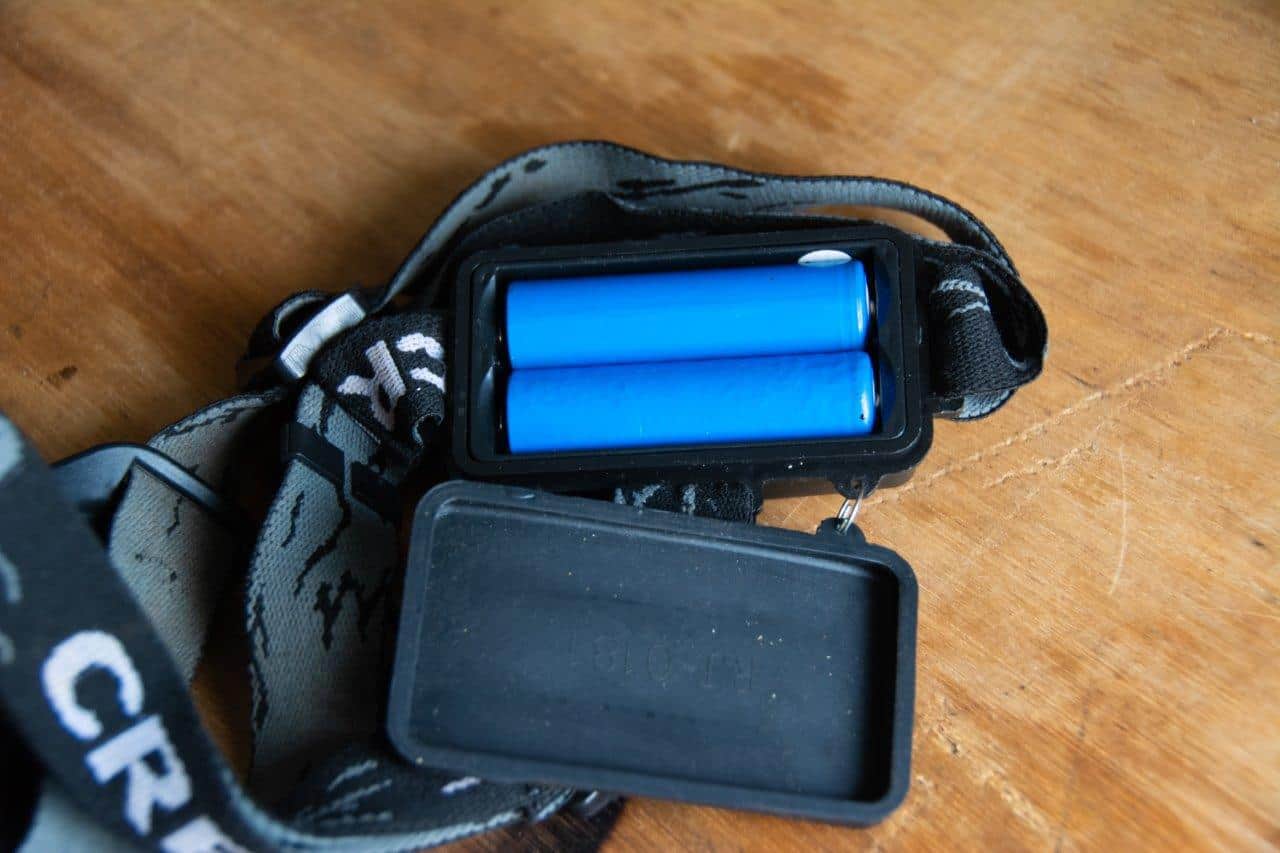 The batteries are big, but they last a long time and are easy to use

How long does it last?

They last a pretty long time; we easily get a week to two weeks of full time camping, using them regularly when it gets dark. These are used to supplement other lights though, so we aren’t using them as our only light source. It’s for when we walk away from camp, or we want to get to an area on the camper trailer or car that is dark, or we go to the toilet etc.

Would we get them again?

After 7 years of abuse, these are still going strong and they cost us next to nothing. In our experience, often cheaper products from eBay last as long as you expect them to. When we feel the need to upgrade we’ll probably get something lighter, and more comfortable but for now they are going great and if you are looking for a cheap head torch you can’t go wrong. 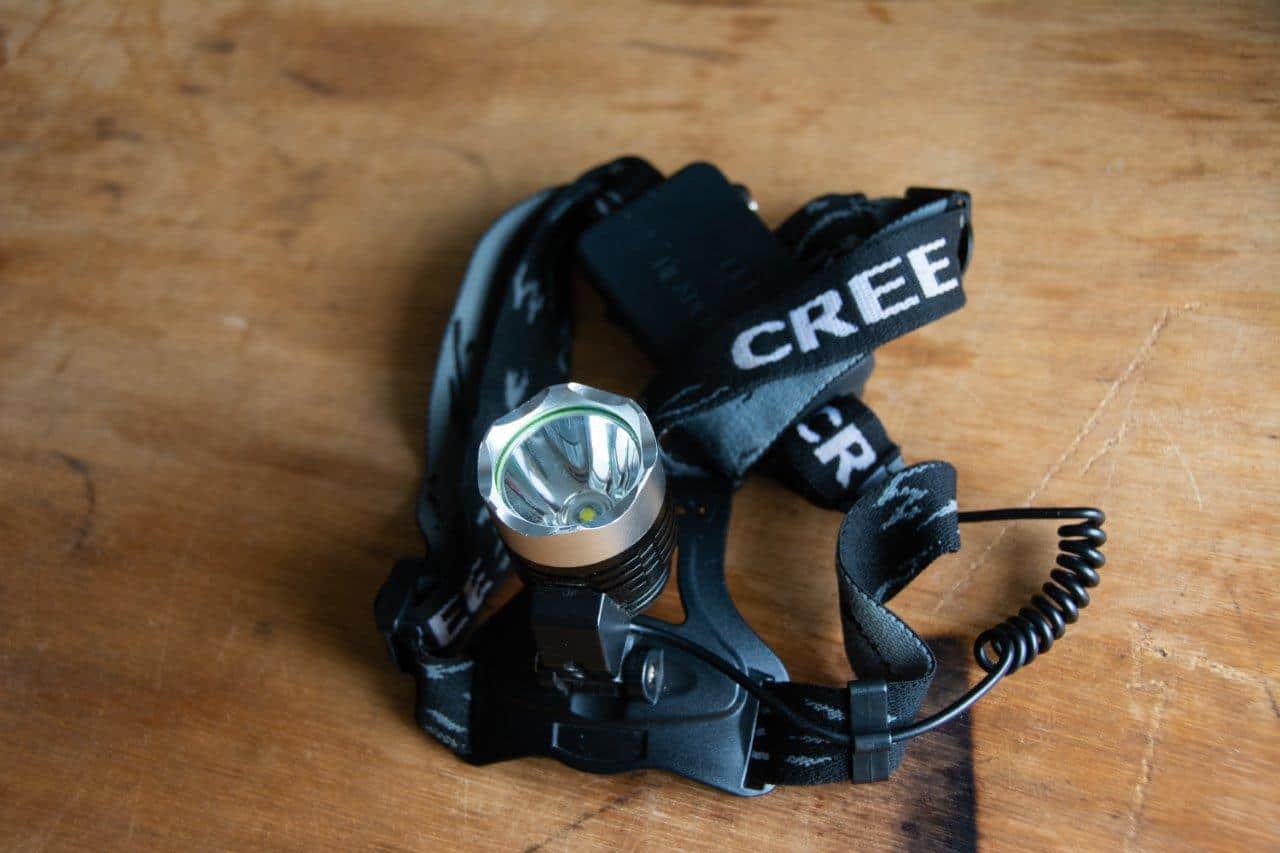 We are more than happy with them