6 weeks in the Coral Coast, Pilbara and Kimberley

Every few months or so, Sarah and I sit down and chat about where we’d like to travel, and explore in the future. Initially we were looking at doing a couple of weeks on the south coast for 2021, but when I suggested we could extend it to 6 weeks and head north, we both agreed it was a far better idea, so a plan for our 6 week trip through the Coral Coast, Pilbara and Kimberley began to hatch.

We love nothing more than packing our gear up and heading away for weeks at a time, trying to find the most incredible locations in Australia, and we’ve been lucky enough to find a huge number of them. Our 6 week trip was spectacular (not without its difficulties and downsides though!) and we came back feeling thoroughly refreshed. 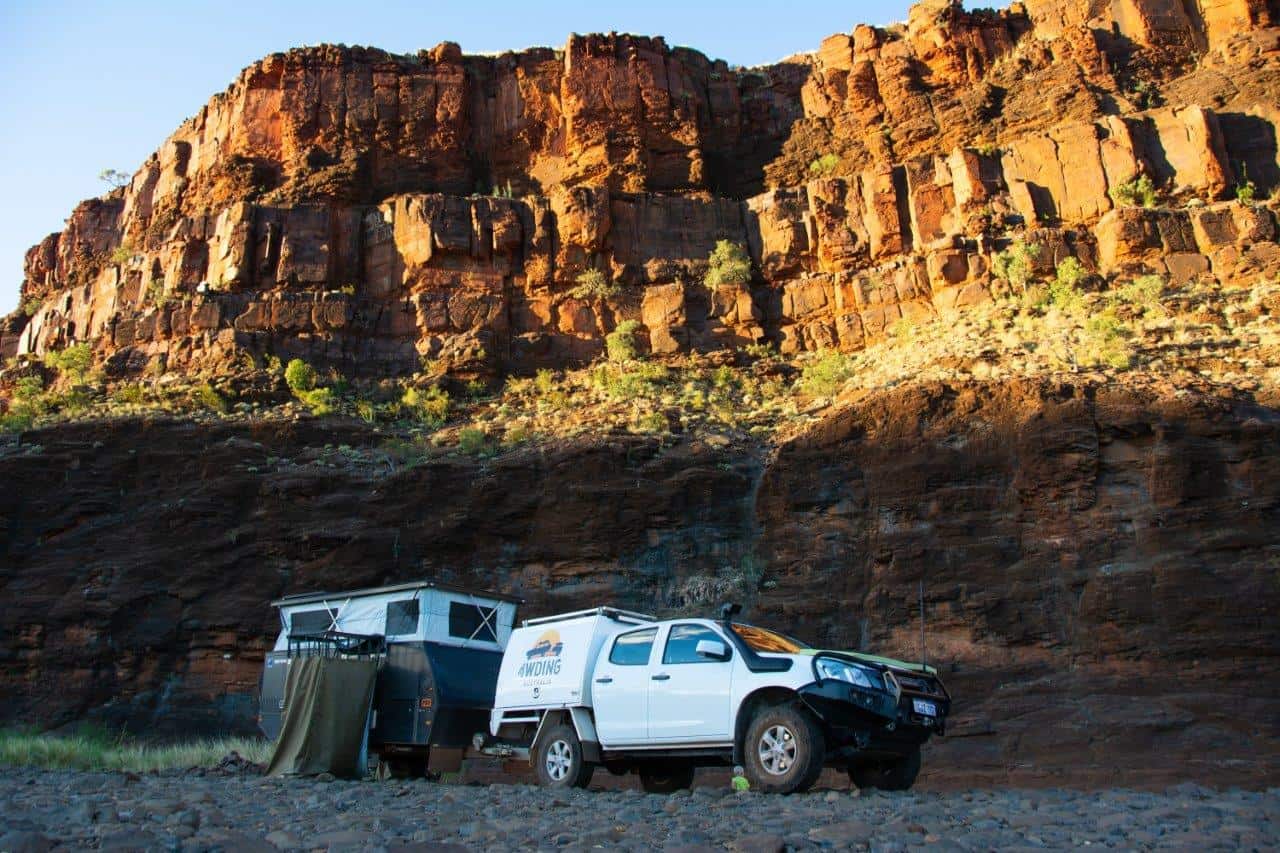 6 weeks away exploring the best of WA

We get decent weather here in Perth. It’s warm and sunny for the large majority of the year, except for winter when it gets reasonably cold and can rain a fair bit. We love a bit of winter camping, but when you can drive 1200km north and miss winter entirely, you’d be mad not to do it.

As it turns out, we ended up missing a good chunk of one of the wettest winters Perth has had in a long time, and had great weather up north. It’s hard to believe that it can be a maximum of 15 degrees in Perth and raining cats and dogs, and 1500km up the road its 28 degrees, blue skies and sunny for weeks on end!

It just so happens that the best time to visit the northern part of Australia is between May and August, so it all aligns just nicely. 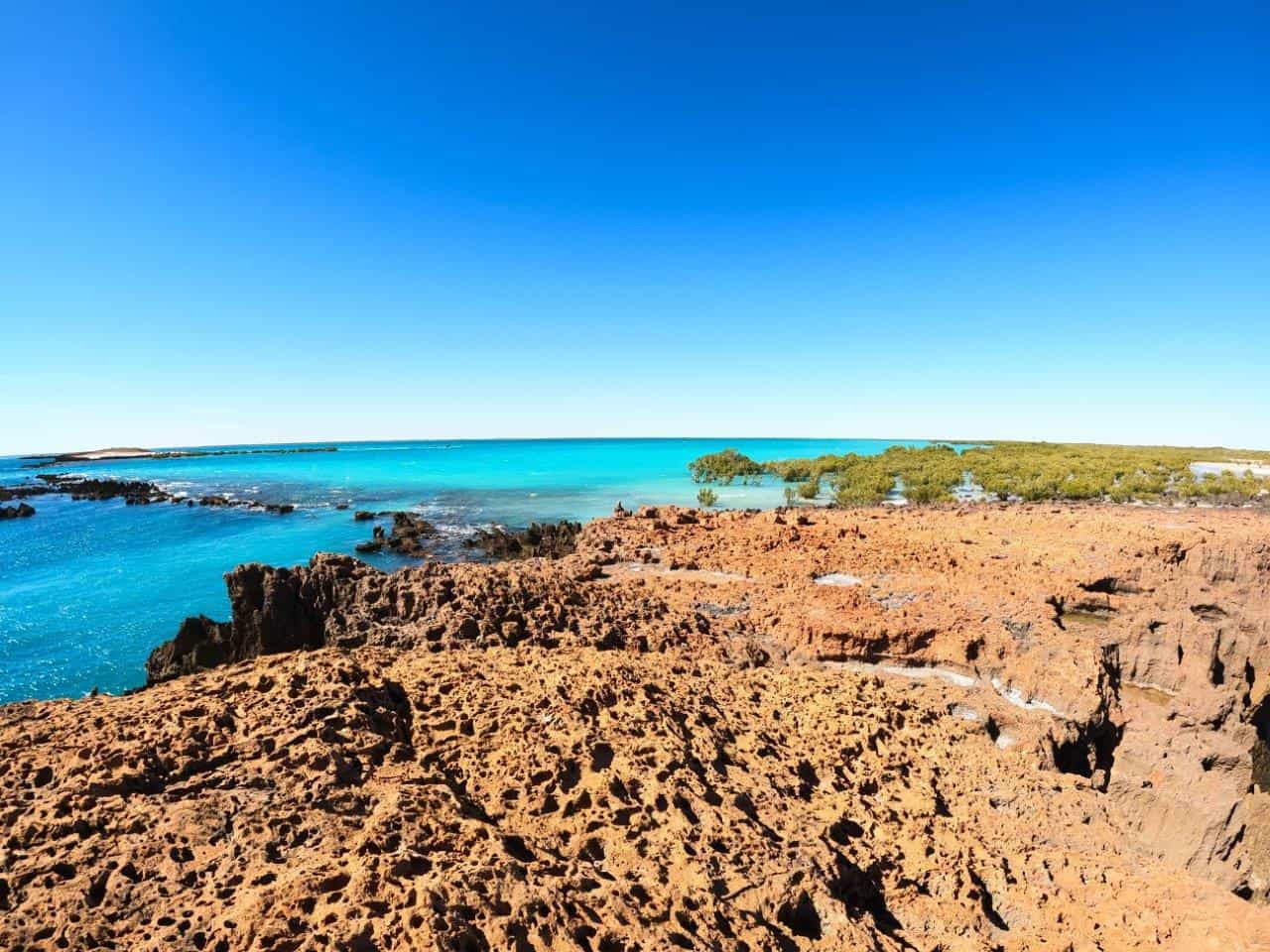 There’s blue skies every day for months up north

What did we travel in?

As usual, we took our 2016 Isuzu Dmax and towed the Reconn R2 hybrid caravan. We’ve been using this for several years now, and really enjoy using it. 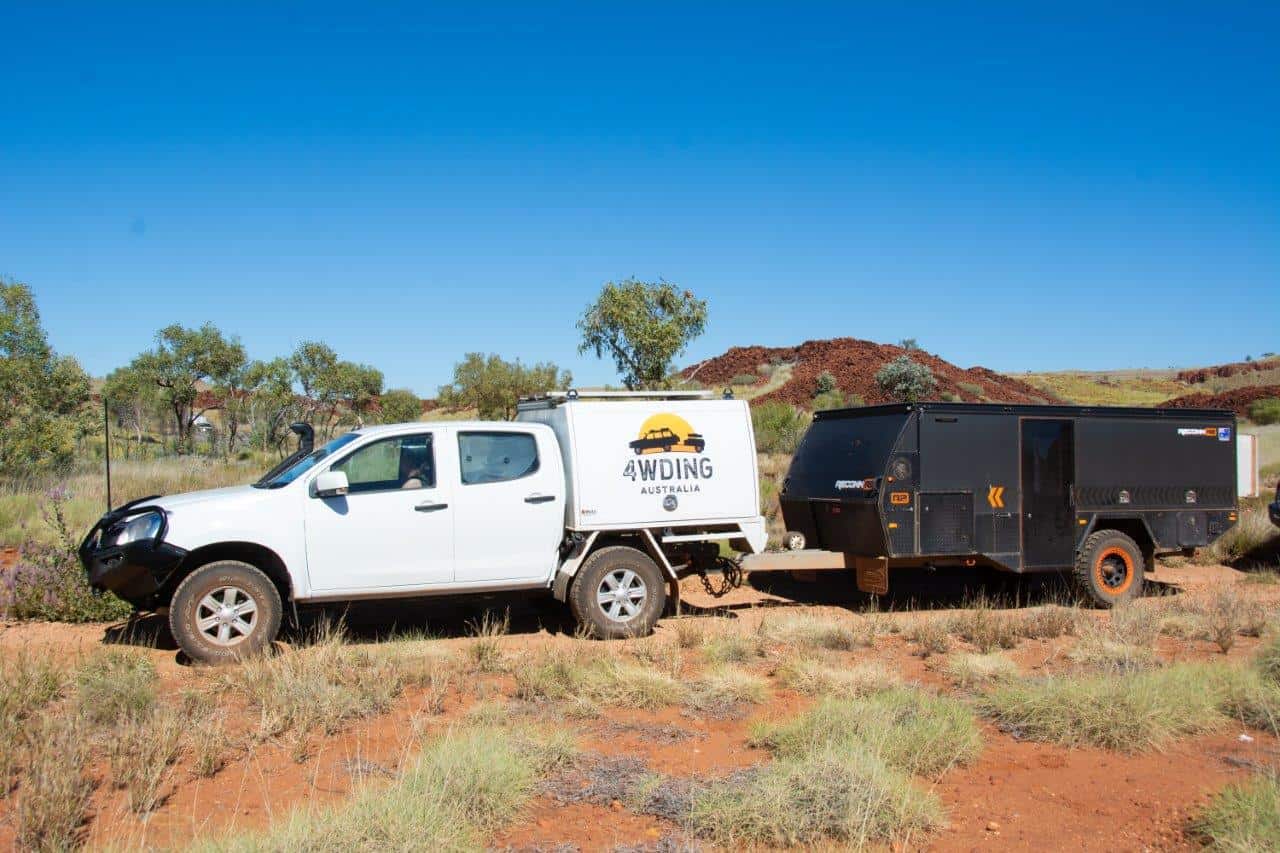 Our Dmax and Reconn R2 Hybrid

Who did we go with?

Initially, the trip was Sarah, myself and our two boys. However, like normal, we put the invite out for others to come along too, for as long or as little as they wanted to. My folks came along for the entire trip (and then some after too) in their Mitsubishi Pajero and Kokoda Digger Caravan, and Sarah’s brother (and family) also did the entire 6 weeks in a 2017 Dmax and MDC Soft Floor Camper Trailer.

We did have a couple of nights away from each other along the way, as people wanted to do different things and we’d agreed at the start there was no commitments to hang together all the time.

We also met my brother and sister in law and a friend in Exmouth (they towed Dad’s boat up) for just over a week. 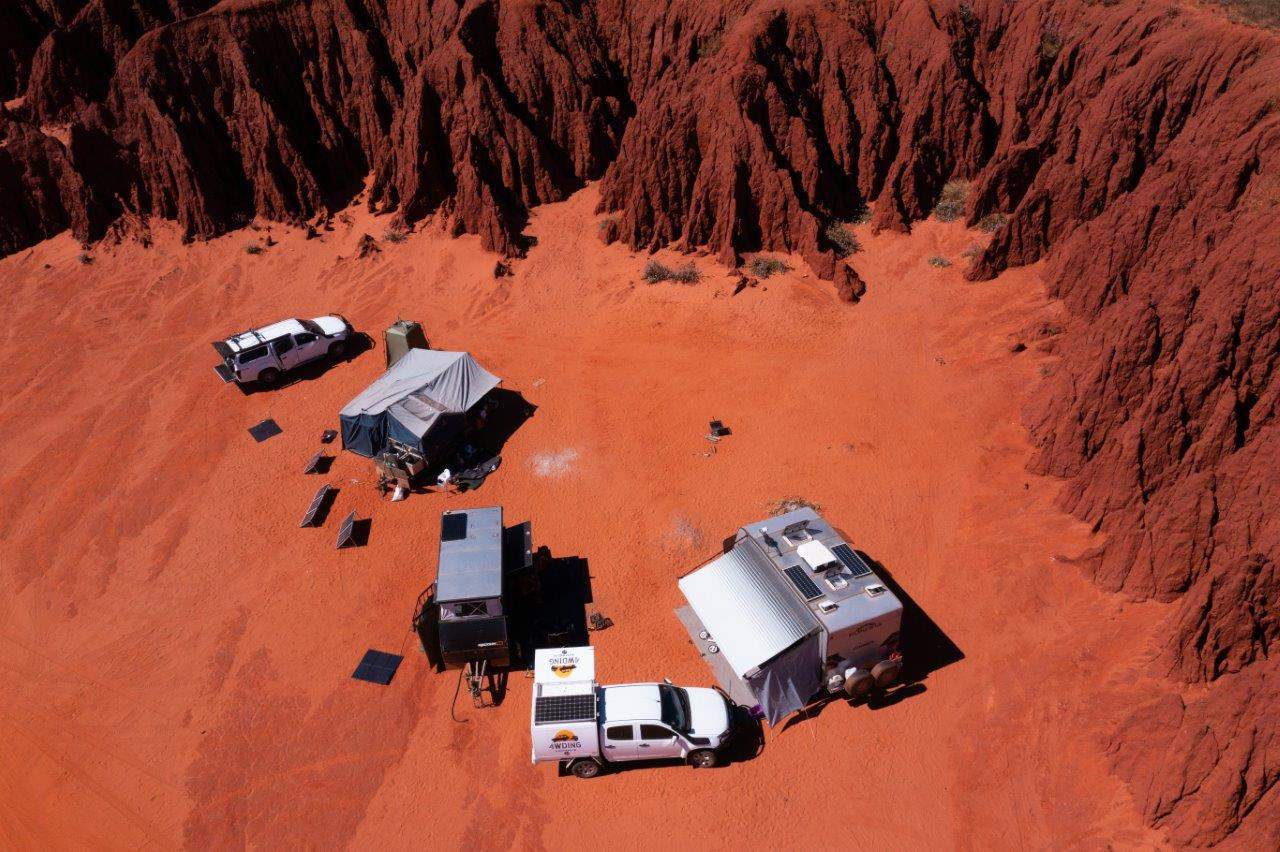 My folks and brother in laws family came along

How old are our kids?

Oliver was nearly 5 when we left, and Cooper was 2.5 years old. They’ve both been travelling extensively since they were young, and thoroughly enjoy it (especially when the grandparents come along!). That said, we have come up with 35 ways to make travelling with a toddler easier! 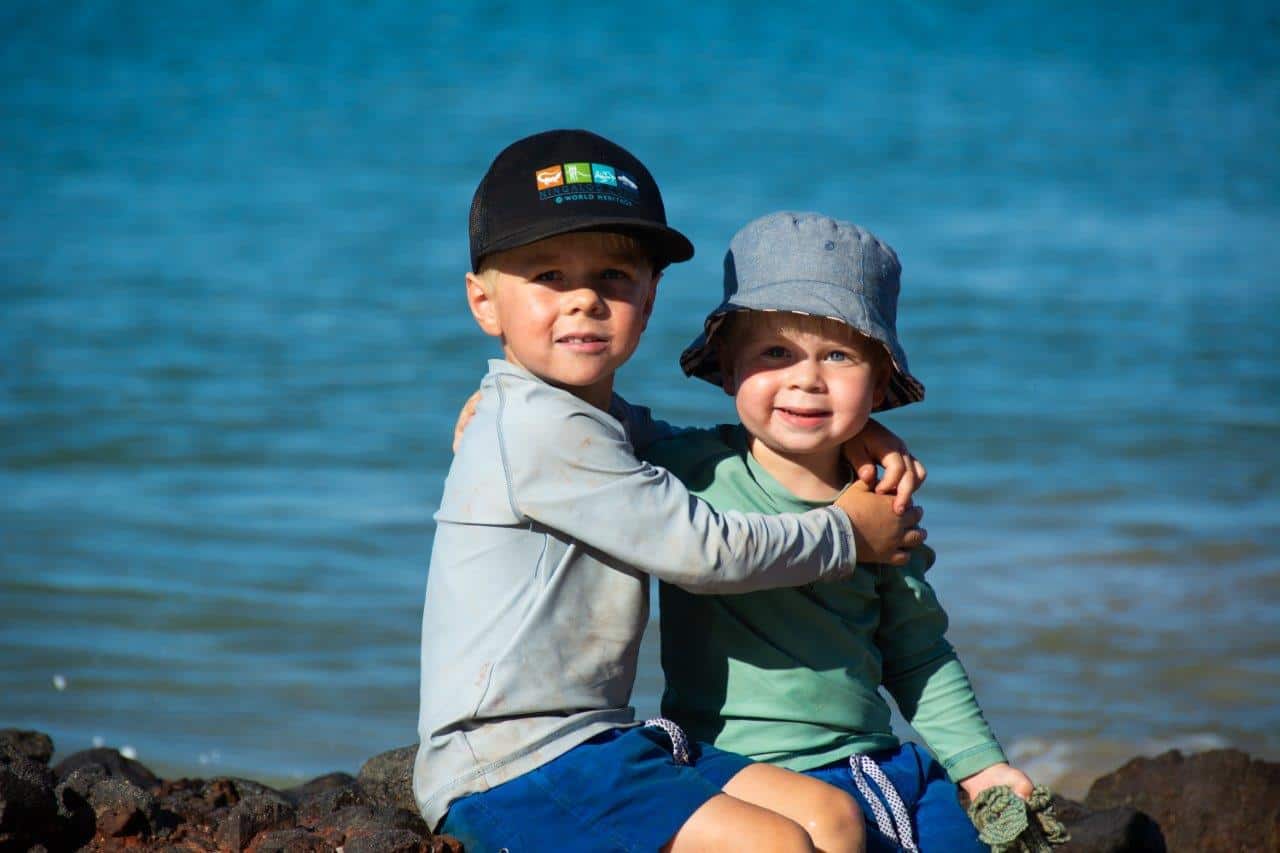 Our two boys, stationary for a split second!

Where did we visit?

Leaving Perth, we meandered our way up the coast all the way to just north of Broome, and then cut back inland through the Pilbara, and back to Perth. We stayed at the below locations:

Then back to Perth (there was supposed to be another night closer to Perth but a big storm was rolling in and it seemed pointless to stay out).

In total, 42 nights of absolute adventure.

We saw so many amazing locations. Cape Range National Park is a huge hit (which we’d done a few times already), along with Emu Creek Station, George River Gorge, Cossack, Pardoo Station, Pender Bay, James Price Point, Barn Hill, Carawine Gorge and Running Waters. The overwhelming majority of places we visited were amazing, and we’d go back in a heartbeat. 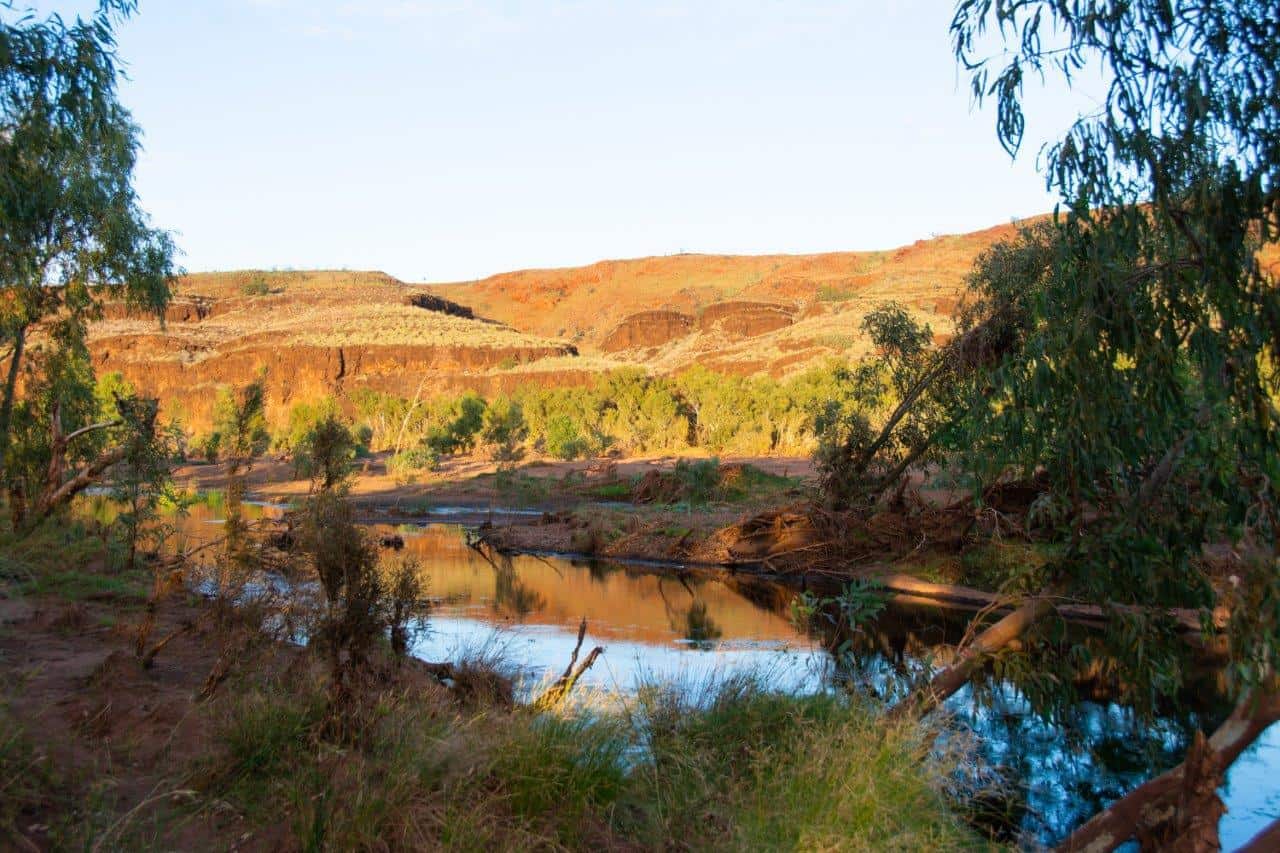 We fell in love with the area around Marble Bar, and its not hard to see why

What was a bit of a let down?

I had high hopes for Dampier and felt let down departing because we decided not to give the jump up (a 4WD obstacle you need to get up to access more of the coast) a crack, which opens up access to the Dampier Peninsula. The panel damage (and other vehicles with us) just didn’t make it a good idea, so we missed out on a pristine part of the world. Dampier itself is a great town, but I felt deflated because the peninsula was one of the biggest things I’d looked forward to about the trip.

Broome was also a let down, but purely because of the ridiculous number of people. In the past we’ve loved staying there, but it was so busy it was actually unpleasant and by the end of our couple of days there we couldn’t wait to leave. 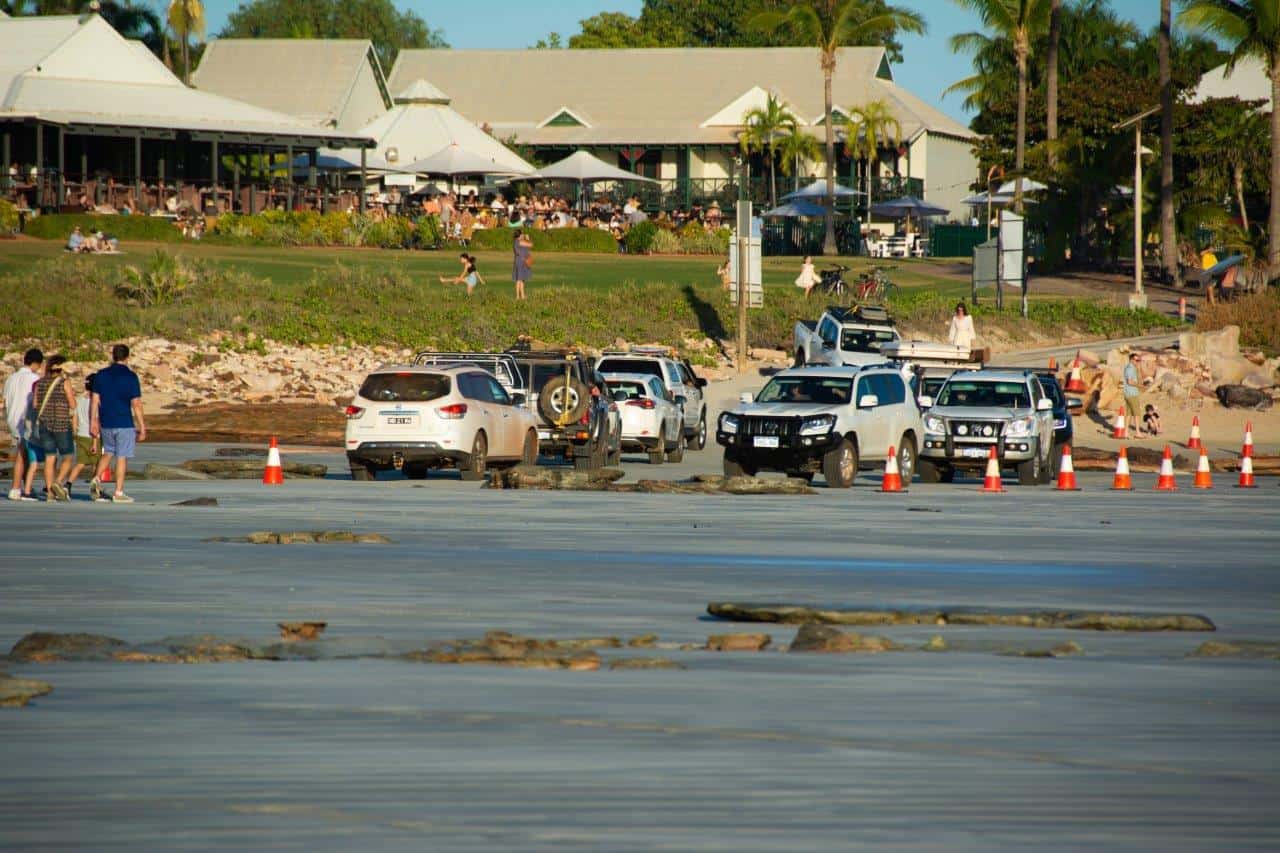 Broome was busting at the seams with people this year

Other than that, there really wasn’t anywhere else we didn’t thoroughly enjoy, and there were a number of places that were well and truly beyond our expectations.

We completed 8302km over 6 weeks, or an average of 193km per day. Like normal, we did a fair bit of driving in the first and last few days to maximise annual leave, with the biggest day being nearly 900km (although that was supposed to be split in two). 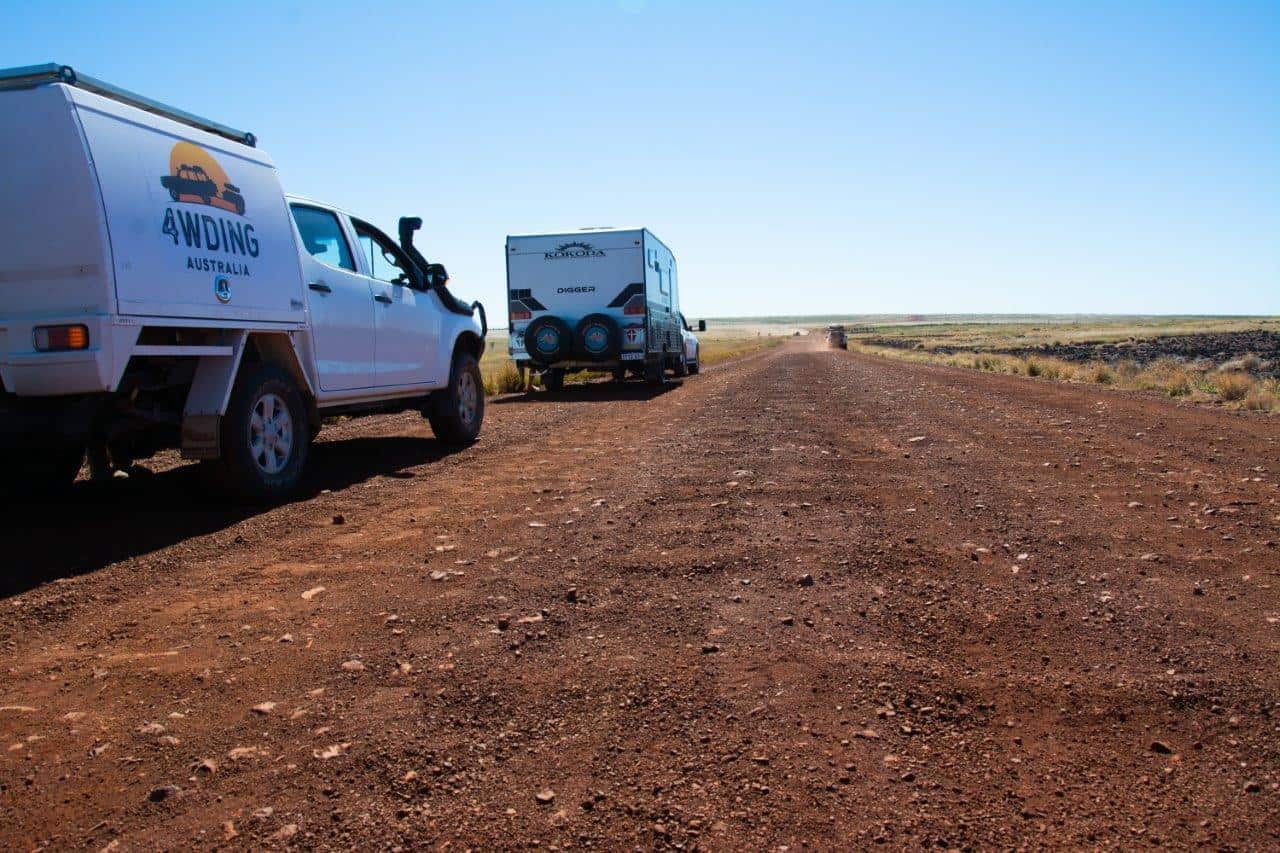 WA’s a big place, and you have to drive long distances to see it all

One of the things we are very grateful for with the Reconn R2 is that its fast to pack up and move. We intentionally only stayed a few nights (or even just one) at a number of places so we could see more, and with the ease of setup and pack away it worked really well.

On our 3 months up north with a soft floor camper we stayed longer in each location because it was so much work to move. I did feel a bit guilty on this trip moving so often as another family decided to come for the whole trip in a soft floor camper, and we’d designed it for our sort of pace, thinking that they would only come for a couple of weeks where we had longer stays. 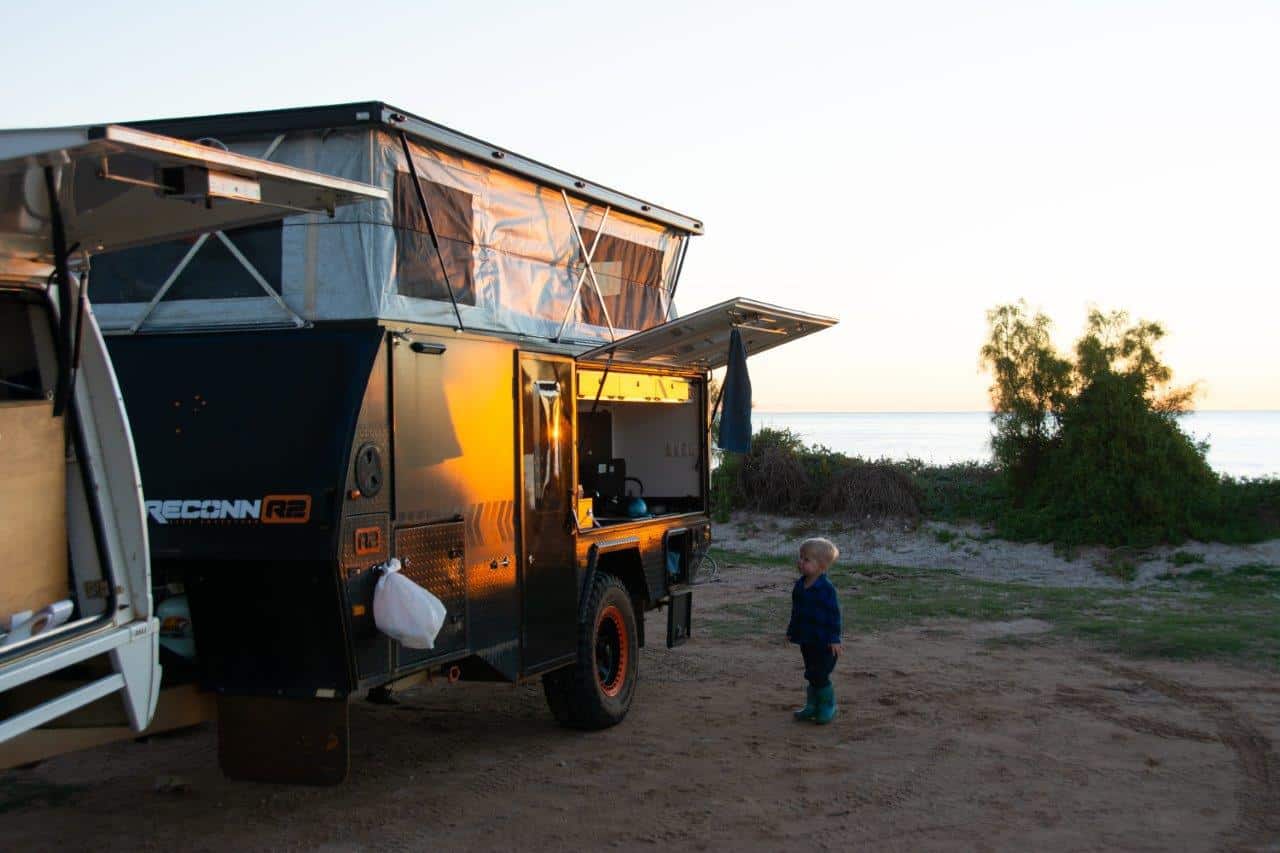 Even with the kids we could get going easily within 15 minutes. It’s only a tiny bit slower than a caravan

It worked out fine overall, but there’s no doubt that a soft floor camper is much harder work.

I was devastated to have to leave Barn Hill (I could have easily done a few more nights there), but I think we got the balance pretty good. Unfortunately when you travel in peak season to popular places you have to book, and that means estimating how long you’ll want in each place. I look forward to being able to travel with a bit more flexibility in the future. 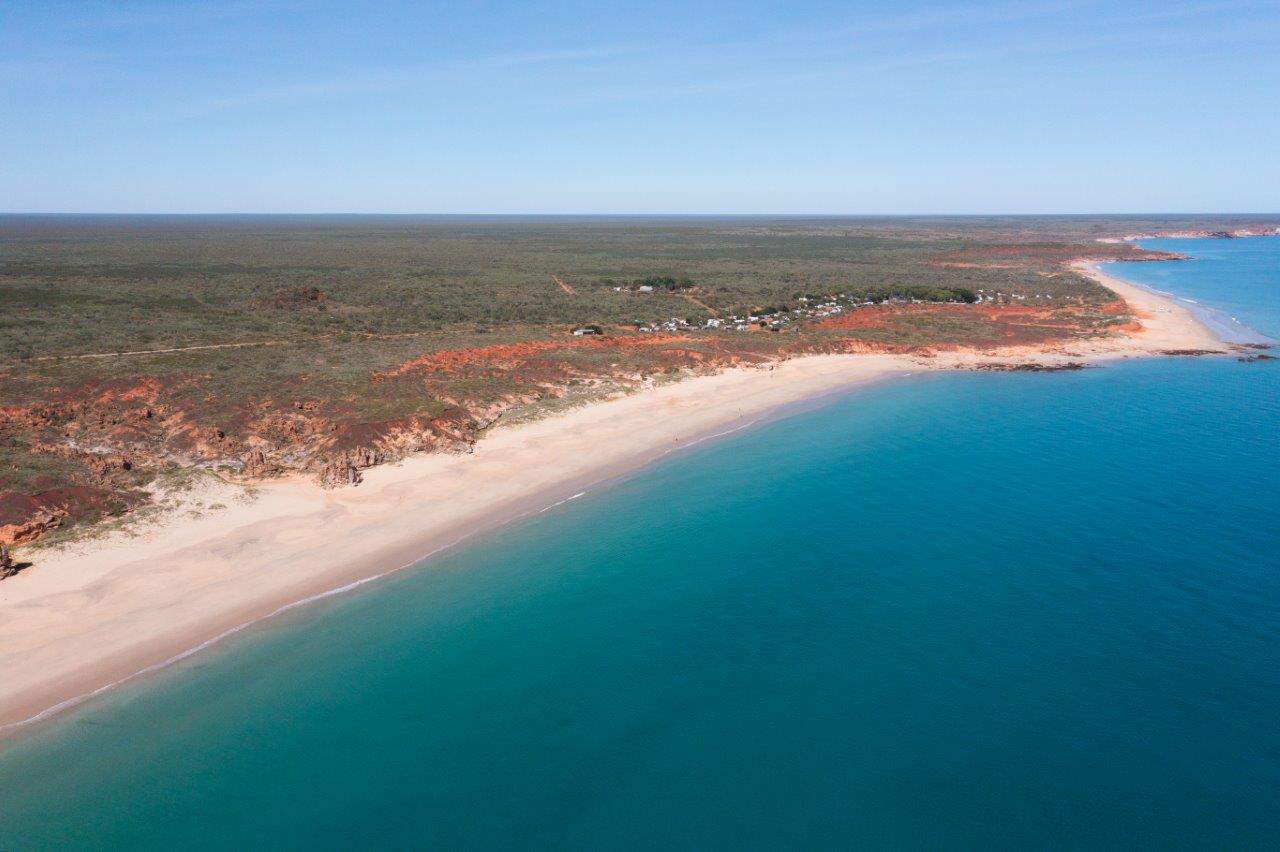 If you aren’t prepared, and don’t expect things to go wrong when you are touring Australia then you need to get used to the idea. Inevitably things will go wrong, especially when you are 4WDing and doing some terrible corrugations to get to the best locations. That said, we had an exceptional run on this trip, with only a few minor things going wrong.

My folks had a wheel stud snap off on their van (luckily just one, which we replaced in Broome).

I got a minor puncture in Dampier and woke up to an almost flat tyre. Ironically it was booked in for a wheel alignment that morning anyway, so they repaired both.

My upright fridge stopped a couple of times (due to thermal circuit breakers playing up), which was annoying, until I realised the issue had nothing to do with the fridge anyway. 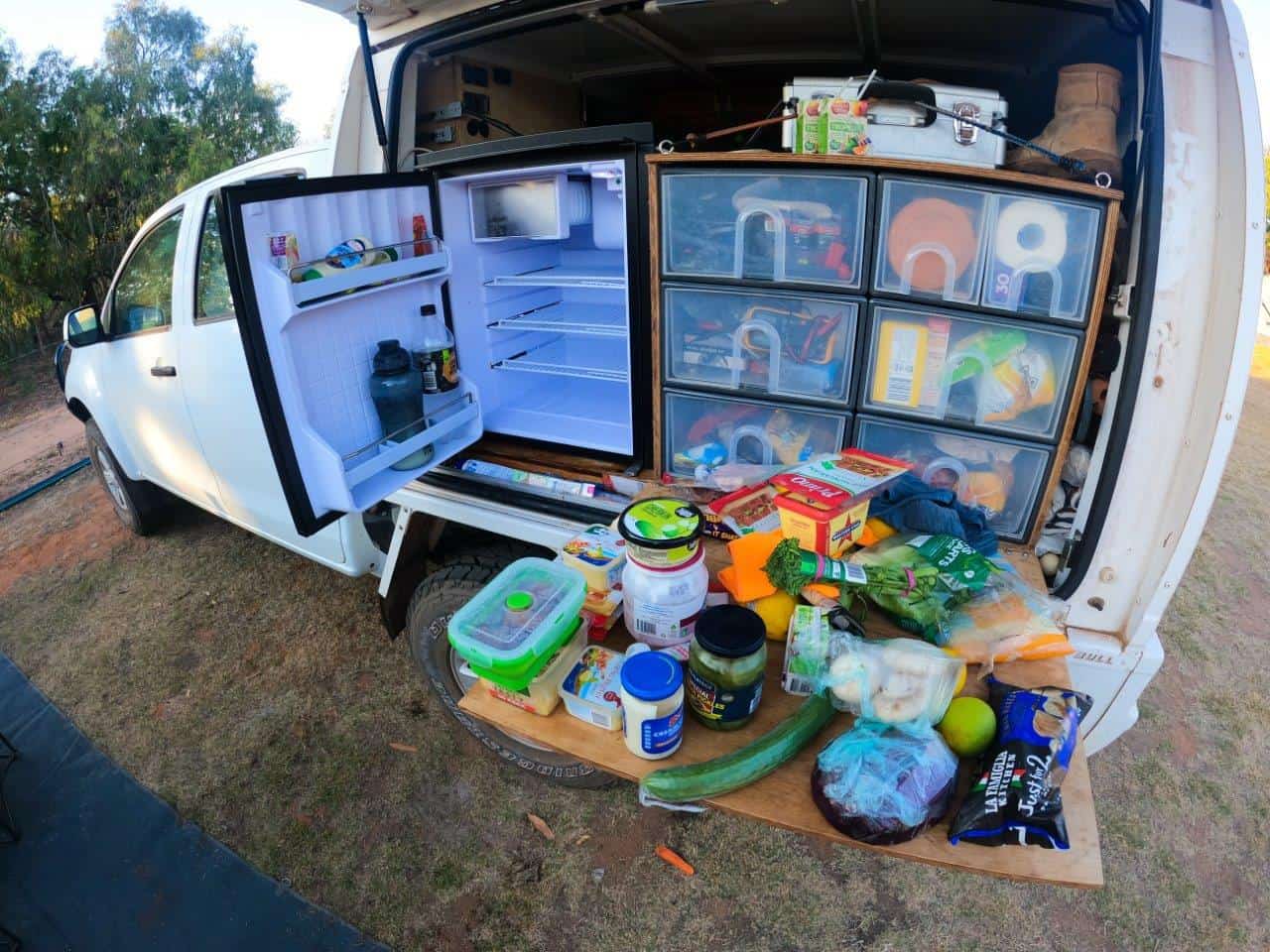 Our Bushman Fridge kept turning off, which we found was from a circuit breaker

I noticed oil weeping from my aftermarket transmission cooler hoses, which we just monitored for the trip and left alone (and got some spare oil and clamps just in case!).

Dad blew a tyre in Karijini National Park (and his spare was 15 years old!) which prevented him from doing any more exploration in the area for fear of having to drive into Tom Price with another car to get a tyre if another let go.

Overall though, things went very smoothly and we had a heap of fun.

13.7L/100km. That’s (mainly) moving 5.3 tonnes of car and trailer down the road over all sorts of conditions, and is actually seriously good. If you want to know what our setup weighs, you can read more about it here – Mobile Weighing. 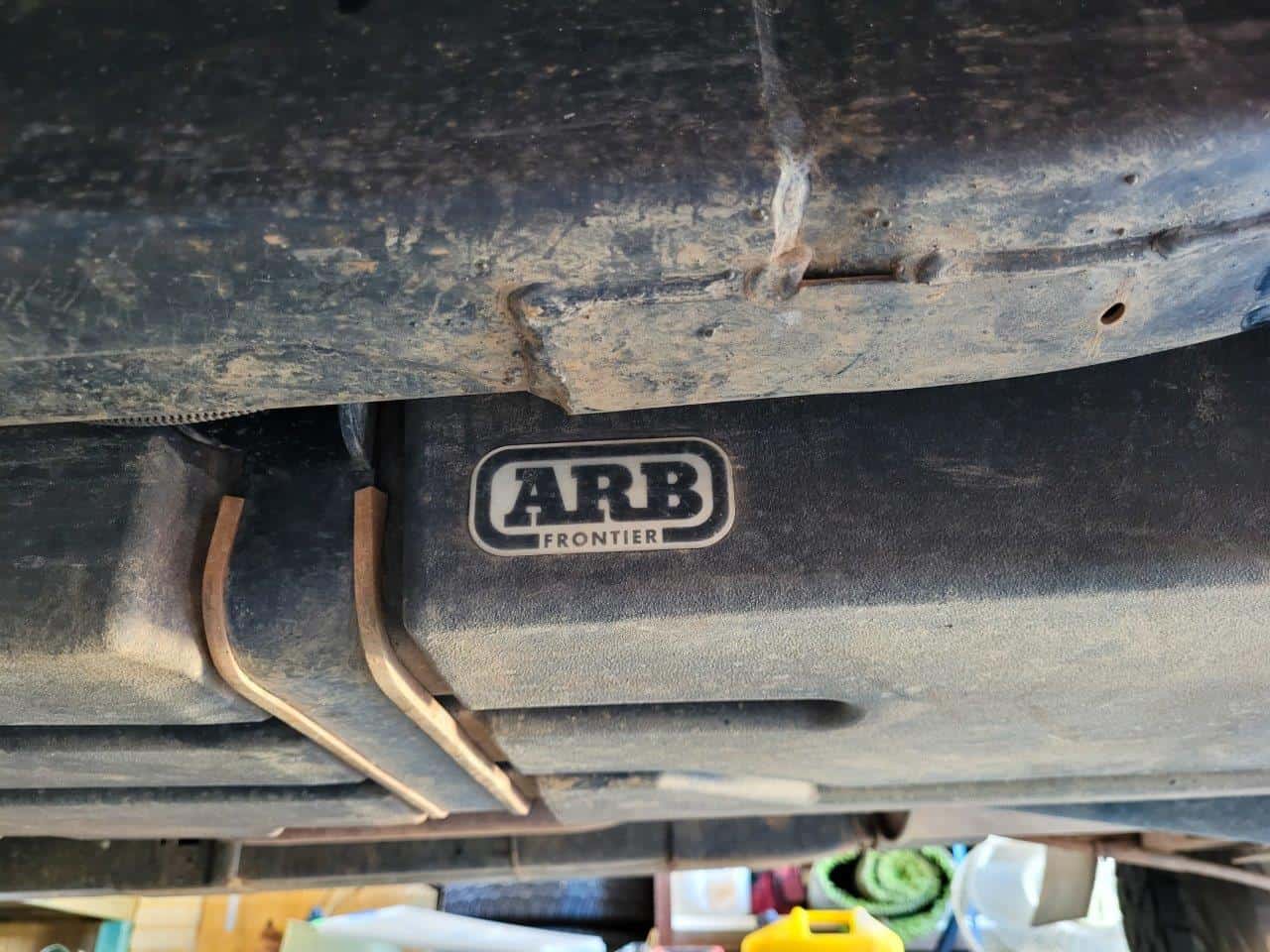 We had a long range fuel tank this trip, which was amazing

How much did we spend? 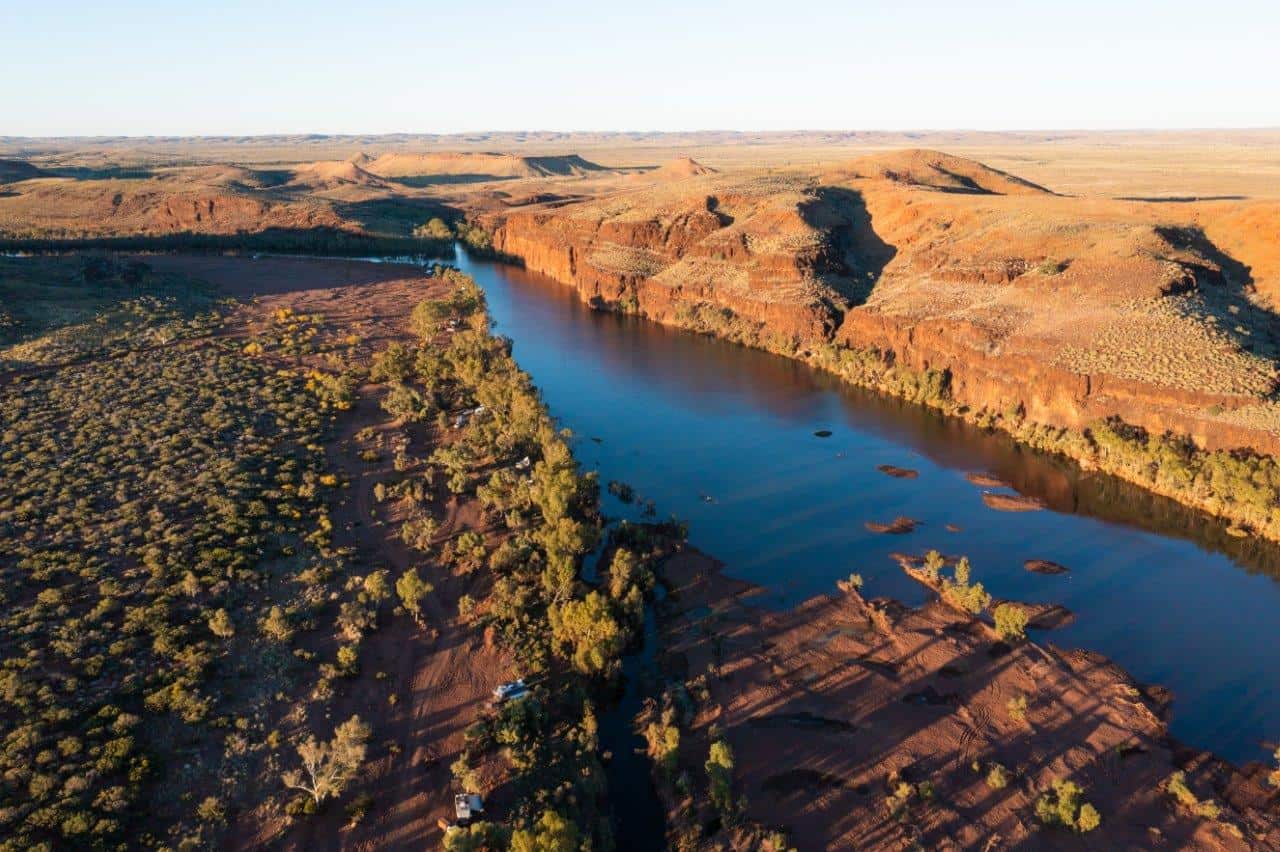 The fuel in Marble Bar was expensive, but so worth it

$1637 including a couple of meals out

$1028, averaging $24.47 per night. We spent 7 nights in free camps, 10 nights in National Park Camps (2 of which were free), 5 nights in caravan parks and the rest were spread out over station stays and low cost camps. 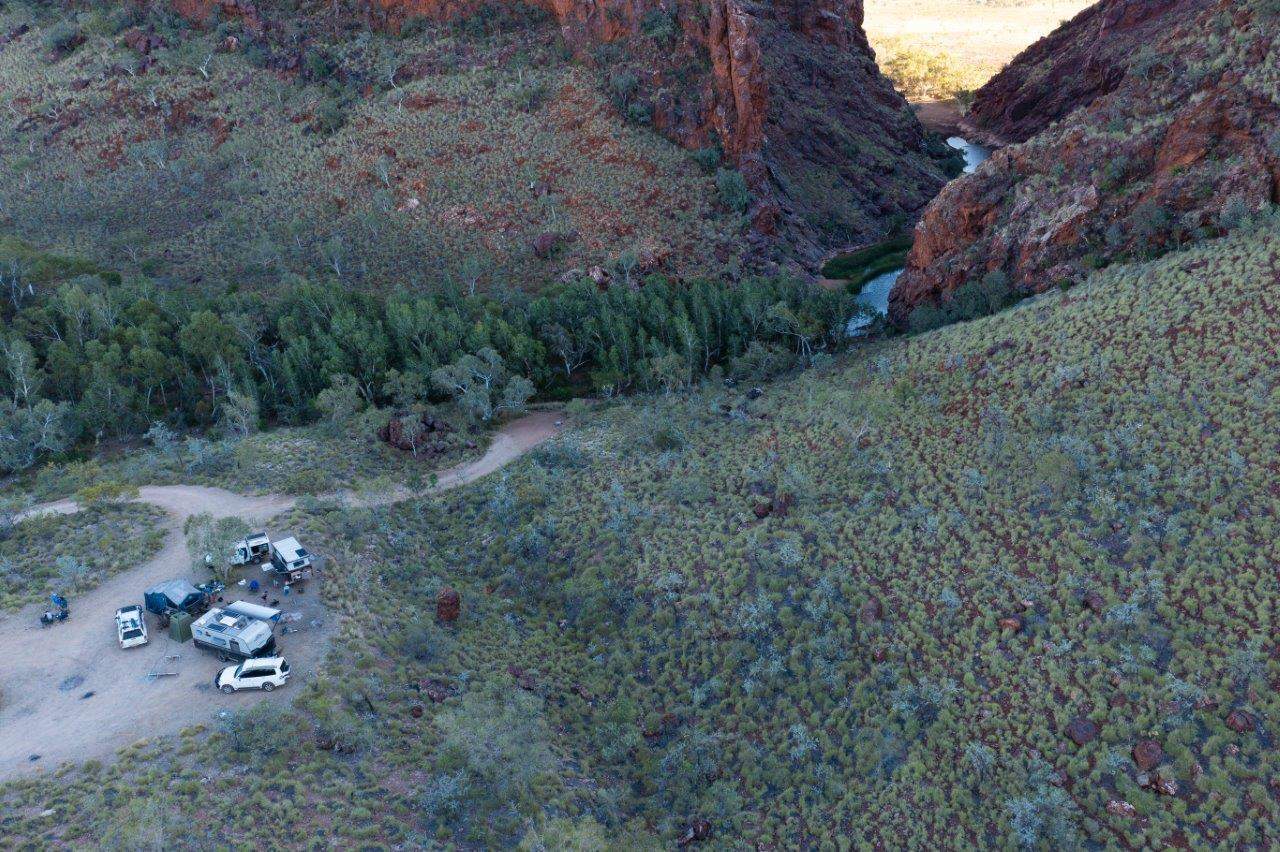 Repco automatic transmission fluid and other bits and bobs $50

Clothes for the boys in Kmart $18

In total, we spent $4693. Now, I have to be honest here and say that there are always other expenses incurred which relate to the trip, but are not necessarily within the trip. We cracked a windscreen, which I’ve left as its right at the bottom and well out of the field of vision, and those kilometres basically require a service, so you are looking at another $1000.

We also bought a few accessories to improve our setup before going, and so the $4693 was purely what we spent on the trip, not to make it happen, or anything beyond the trip itself.

Per day and km cost

Split out per day, we spent $109 every single day.

If you split it per kilometre, its only $0.57, which is considerably less than the $1 per kilometre a lot of people travel on.

Would we do it again?

In a heartbeat. We had such an amazing time, and are thoroughly enjoying the fact that the kids are getting older, and easier, and more fun to have around. We had some truly special family time and look forward to doing it more. In fact, if all goes well we’ll be doing (a lot) more of it late next year!

The kids are getting easier to travel with, and even though we had my parents around (who helped out a huge amount) it was significantly more enjoyable than the 3 month trip we did when Oliver was 18 months old.

We look forward to a LOT more touring around this magic country, and checking out all of the other states and territories! 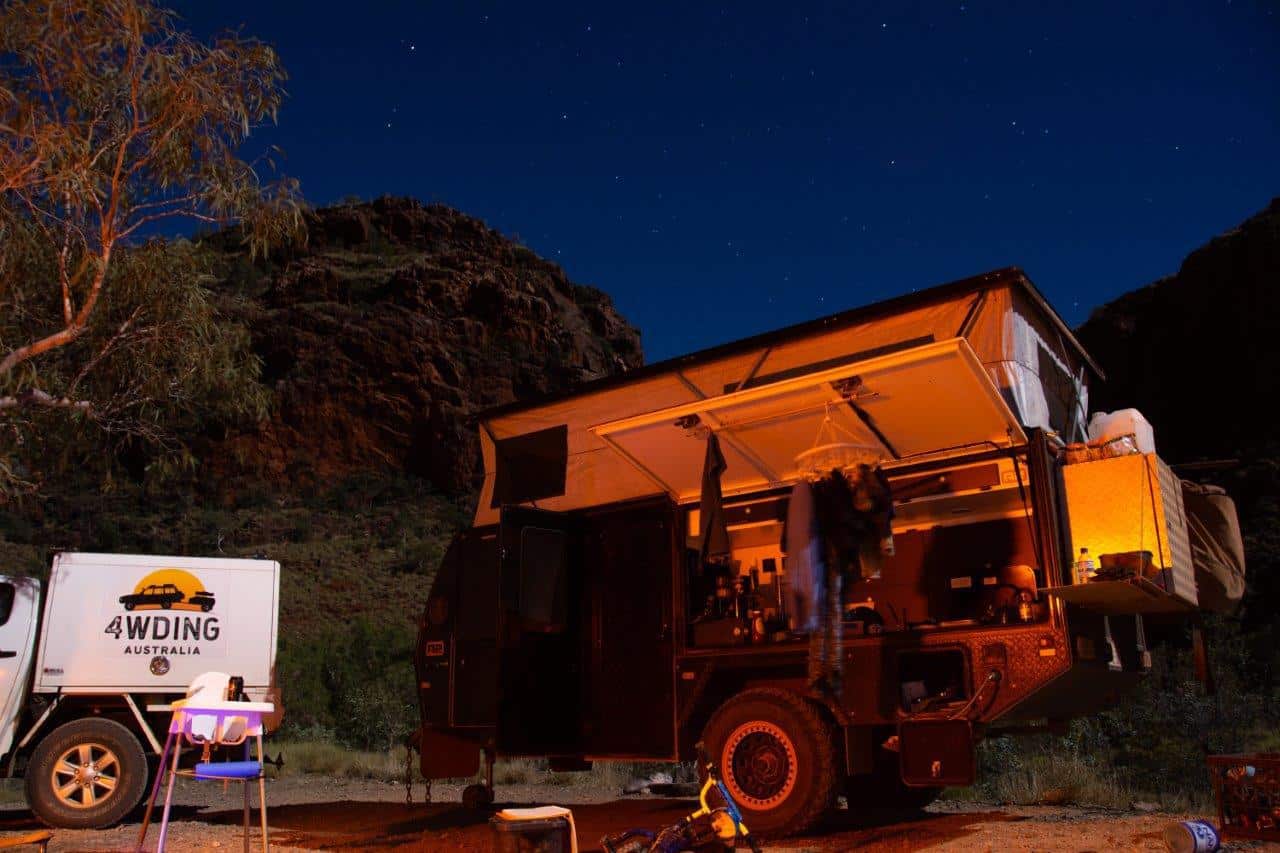