Garden Island is home to a Naval Base in Western Australia. It is commonly used for recreation as well, including fishing, snorkelling, SCUBA diving, picnics on the beach and general relaxing. In terms of length, Garden Island is only slightly smaller than Rottnest, but Rottnest Island is much wider. Garden Island blocks out much of the ocean and as a result it is usually quite calm on the east side. Of course, when it is very windy and the swell is up even the east side can be uncomfortable and dangerous in a smaller boat. 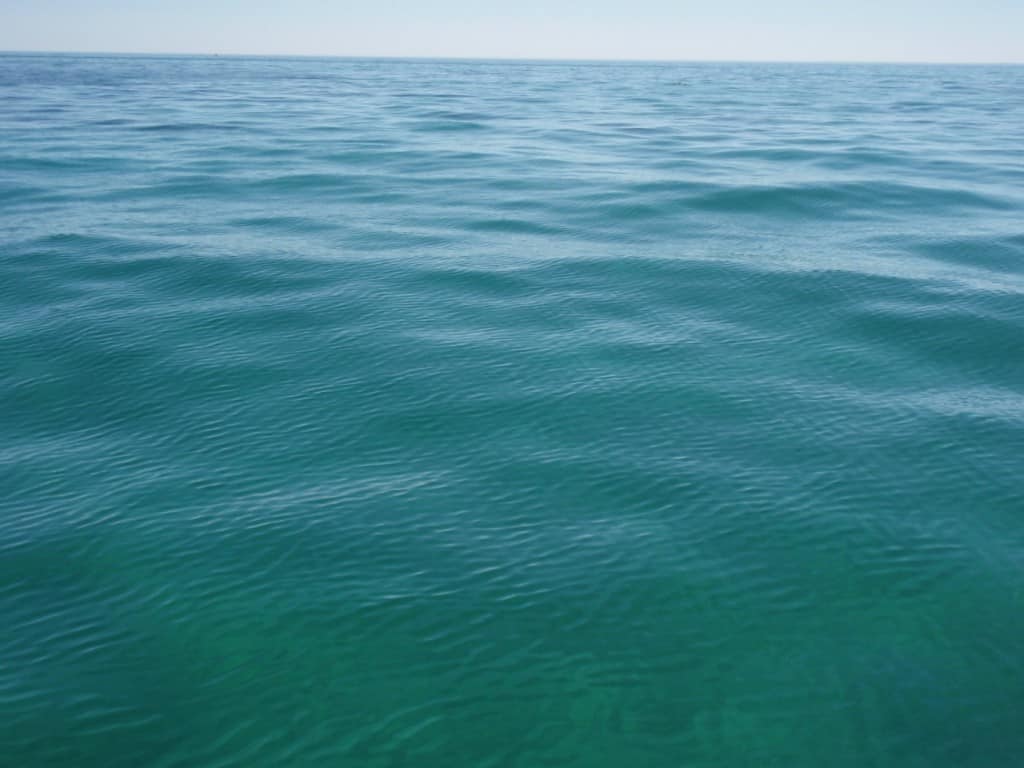 On the way to Garden Island

Where is Garden Island?

Garden Island is located just off the Rockingham Foreshore. There is a causeway for vehicles to drive back and forth on, but only those with the right authority are allowed over there (those employed on the island mainly). As the island is so long, you can also get to it from the Woodman Point boat ramp. On the southern side, Garden Island is not very far away from the coast at all. If you want to visit the north side of Garden Island you are better off launching at the Woodman Point boat ramp.

How can you get to Garden Island?

The only way to get to Garden Island is by boat or kayak, unless you work there and have the required authority to drive over. Being a Naval Base they are very strict about who is allowed onto the island, and you can get into some serious trouble for being there in a vehicle without any permission. By boat, you can leave at the Woodman Point boat ramp and travel west, or you leave at a boat ramp in Rockingham and travel north/north-west. 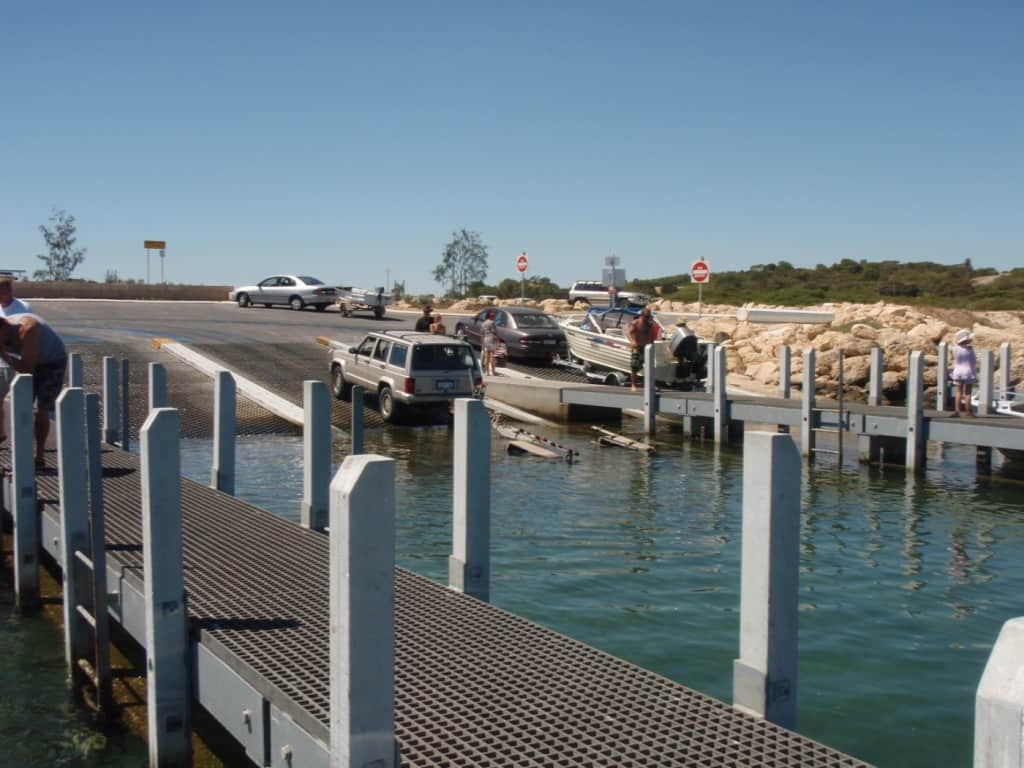 There are a few boat ramps in Rockingham; near the foreshore or further out towards Point Peron. I normally launch at the Point Peron boat ramp because you can get to the western side of Garden Island the quickest, and it is a good boat ramp. On a good day you can take small dinghies over to Garden Island, but you need to be very careful once the wind and swell picks up. There are also a huge number of reefs which will cause you grief if you get too close.

Unless it is fairly calm I suggest you stay on the eastern side if you have a boat smaller than 14 foot. Of course, if you are comfortable with the boat then you can venture around to the western side, but this can be very rough at times. The north west of Garden Island houses a great little bay which is usually quite protected by the many reefs around it, and yields some good fish at times too.

Can you get onto Garden Island?

Unless you have a boat, you can’t get onto Garden Island. If you drive across without the authority then you are likely to get a big fine. If you take your boat to Garden Island, you are allowed to walk onto the Island, but you need to respect the fact that it is a Naval Base. You are not allowed anywhere near the South Eastern side because that is where the port and boating activity is. The rest of the beach northwards on the east side is fine to spend time on and same with the beaches on the north, west and south west sides.

The only thing that you need to remember is that you are only allowed on Garden Island during daylight hours. Generally they don’t appreciate you going much further into the island than the beach, unless you have permission even during daylight hours. There are a few trails which they allow you to walk through during daylight hours, but you want to find out what these are before you go! As soon as the sun starts going down you need to get off the island. You will find if you don’t do this then they will know quickly and people will come down to question what you are doing. Much of the island is under surveillance; respect what they are doing and you won’t have any issues.

As mentioned above, you must leave the island when the sun goes down. What this means is that if you want to stay at the Island, you need to do it on a boat. A lot of people do this, but you want to pick the right place to Moore based on what the weather is doing. Most weekends there are a number of larger boats moored in the North West corner of Garden Island. This is a calm bay because the shallow reef surrounding it stops most of the swell. Of course, if the swell is up then it is not going to be the best place to stay a night.

If you are going to go to that bay in a boat you need to be very careful how you get into it. A lot of the reef is shallow, and I have seen more than a few boats run into the reef. There are a few markers, but you need to take it slowly and carefully! It all comes down to what the tide is doing, and how deep your hull is!

Garden Island has some of the best snorkelling and Scuba Diving around Perth, with amazing fish and other marine life. The western side is generally better, although there are some impressive spots north and south of the island as well. Further east of the island (where it is deep there are some good dives too, and even a few land marks to check out). Ensure that you are displaying a dive flag and then go and have a look! Crayfish are abundant in the right places (and right time of year) and there is more than enough to keep you occupied underwater. 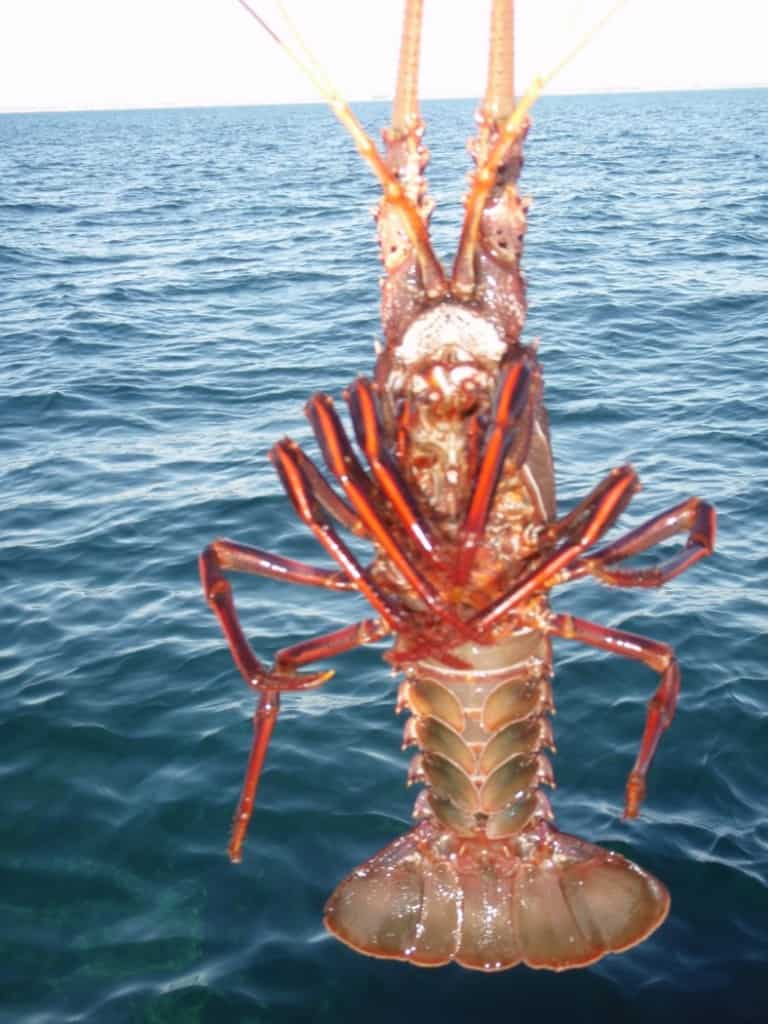 A Crayfish caught near Garden Island

Alternatively, head further west to the 5 Fathom Bank (if you have a bigger boat with some good quality safety gear) and the diving there is considerably better. The 5 Fathom Bank runs north and south for a long distance and a huge number of good fish and crayfish are caught there every year.

A lot of people fish around Garden Island. You can catch everything from squid to herring, tailor, skippy, dhu-fish, snapper, mackerel, tuna and salmon. Generally the west side is better for your bigger fish, but it’s not too hard to get a good feed on the eastern side in the shallows either (herring, squid and whiting).

In between the west coast and Garden Island there is also some good fishing too (in the deeper areas). Snapper in are plenteous in this area (just before and after they come in to breed). Garden Island is big enough to have a massive variety of fishing locations, and with a bit of trial and error you will find locations that return good fish time and time again. 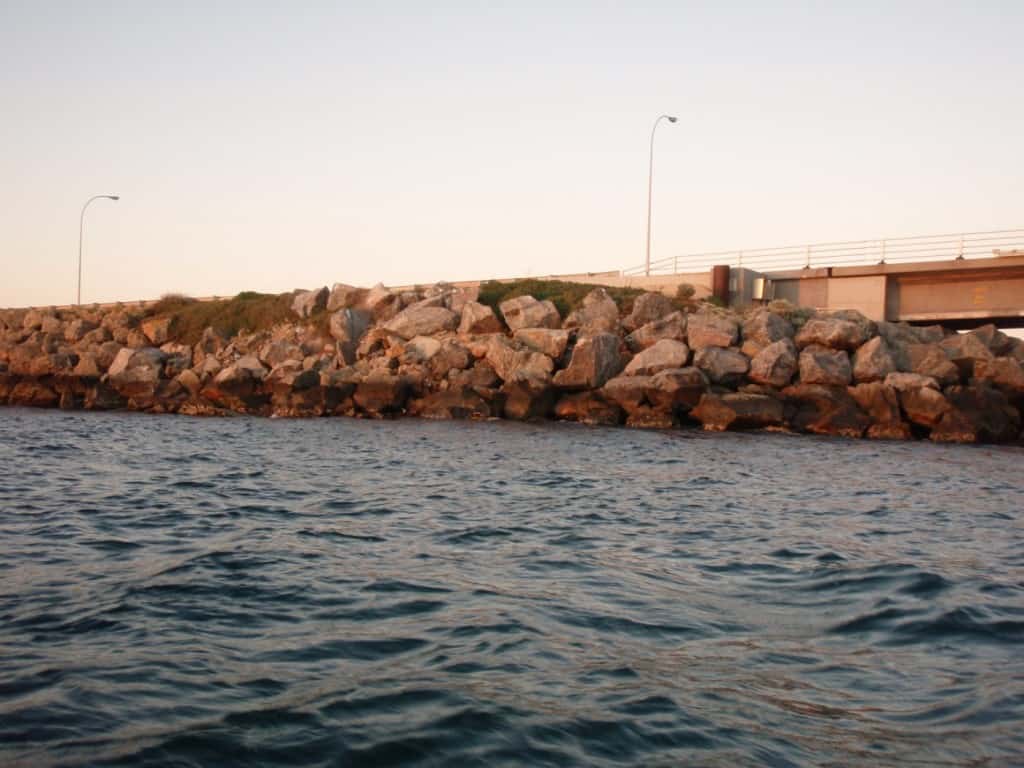 The groin leading out to Garden Island

After quite a long time of trying to get information out of people (phone calls, internet sites and even meeting the search and rescue people) I finally found some information on Spear Fishing at Garden Island. There is no fishing law that forbids you from spear fishing near the island, but the Navy has its own law forbidding it.

5 Fathom Bank and the 3 mile Reef are probably the two most common fishing locations in Perth from a boat. The 5 Fathom Bank runs north and south from the west of Garden Island for several kilometres, and houses some stunning underwater scenery. It’s quite a distance out, so you need the right safety gear (decent sized boat, radio, EPIRB, life jackets and flares are a good start). The depths vary from 5 – 40 metres which provides good snorkelling and SCUBA diving. Cray fish are very common, along with some thumper sized fish too!

Slightly north of Garden Island lies Carnac Island. This is much smaller, although it has some decent fishing, snorkelling and spear fishing as well. Rottnest Island is further North West, and is designed more for tourism.

Rottnest Island is probably the best for fishing, snorkelling, relaxing and boating in general, but it is much further out and considerably more popular. You can stay at Rottnest Island in the designated bays and Island Accommodation, which is great. To get there, check out Rottnest Island Ferry. 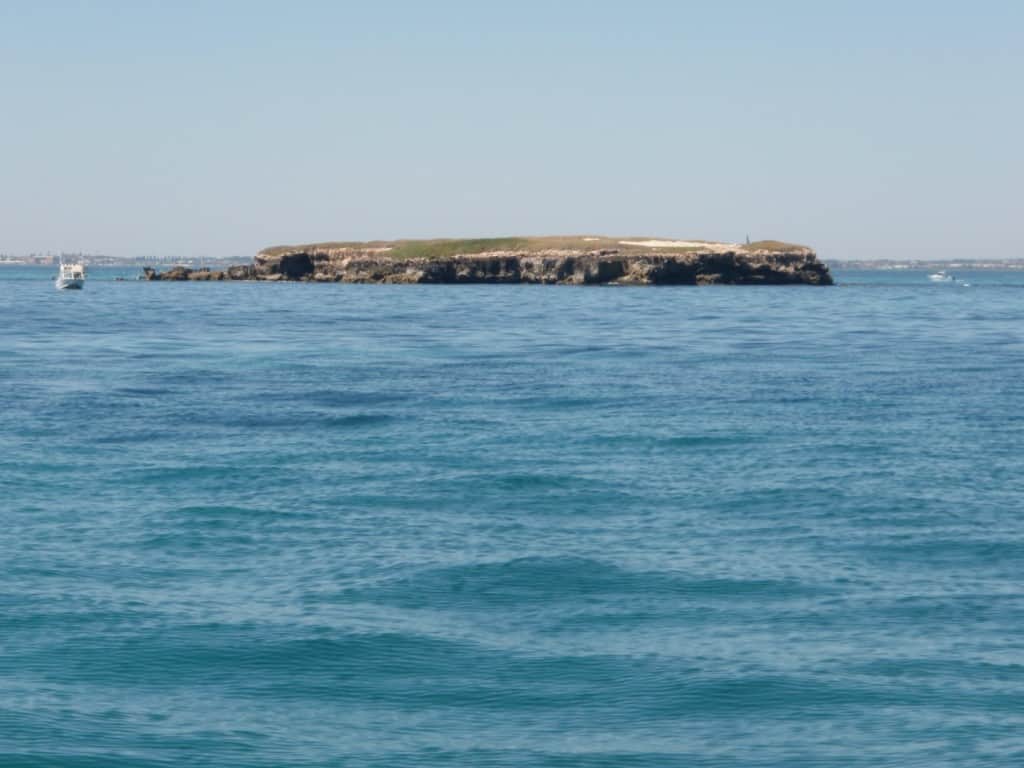 If you don’t have the new EPIRB, you are not allowed more than 400 metres west of Garden Island. There is a section which you are allowed to be in which runs from the north of Garden Island out to Rottnest Island and back in near Ocean Reef where you don’t require an EPIRB. Every other area requires you to have the updated EPIRB, which is sensible to have anyway.

Garden Island is a pretty place, and one well worth visiting. There is enough to keep you occupied for at least a day, and you are guaranteed to catch some good fish if you are a bit persistent! Best of all, you can visit the island for free (minus boat fuel!) which makes for quite a cheap day out. 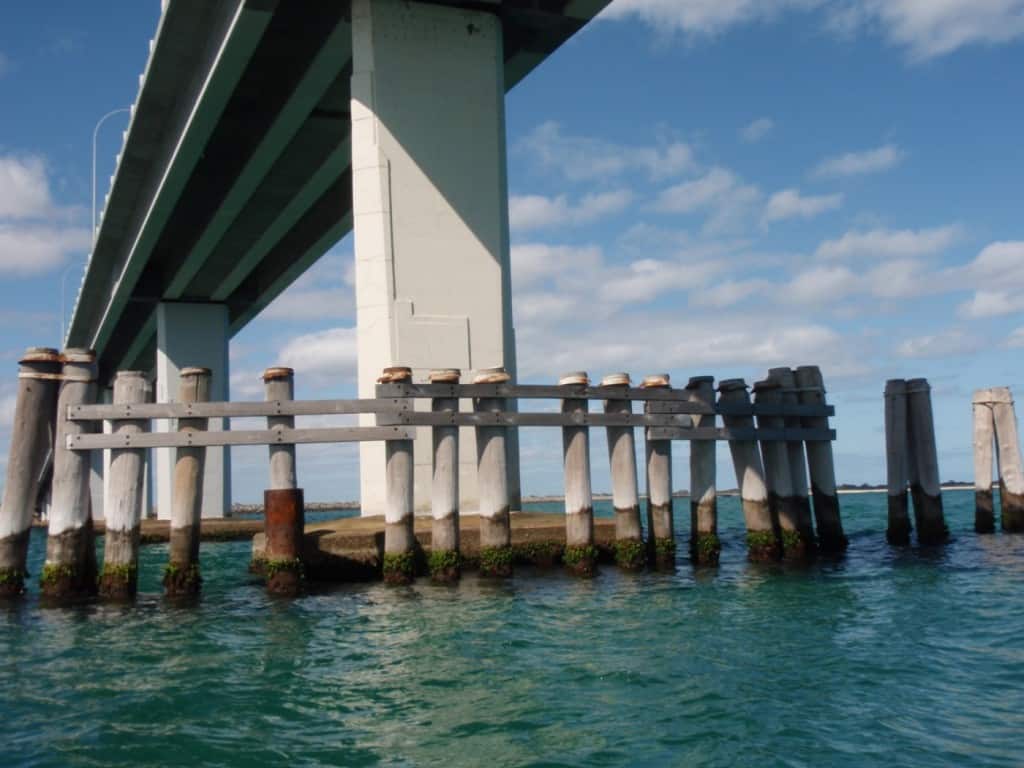 The Bridge to Garden Island