4WD Recoveries; a guide to the forces and correctly sizing recovery gear

There are some serious forces involved in a 4WD recovery, and they can be extremely dangerous. If you’ve ever wanted to know more about the physics of a 4WD recovery, and how to size your recovery gear correctly, this post will cover everything you need to know, and more.

This is not the normal post that we do here, and there’s a good reason for that. It’s because it was not written by me, but rather submitted very kindly by a very clever bloke by the name of Ian Norrie. So, grab a cuppa, sit back and turn your brain onto maximum! 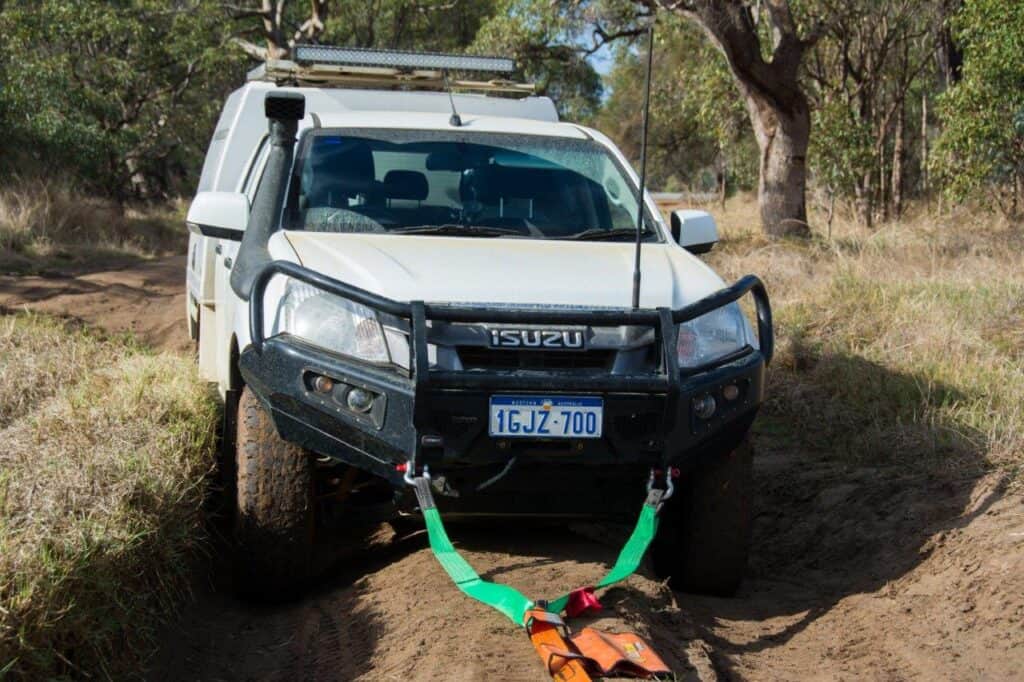 4WD recoveries involve a lot of force, and sizing your gear correctly is imperative

Your 4WD is well and truly bogged. You want to know whether your recovery gear is up to the task?

This article will tell you.

We will gloss over the fact that kg and lb are units of mass, not units of force, kgf, lbf and kN (where 1kN = 102kgf = 102”kg”). Blame Isaac Newton self-isolating during a plague for discovering gravity.

Your 4WD is stuck. What is the force required (and hence the load on the various recovery items involved) to recover it? This force required to de-bog the vehicle, is a function of:

The weight of the vehicle

The type of terrain the vehicle is bogged in

The slope of this terrain

The following charts are for the three most common types of terrain you are going to get stuck in; loose rock, soft sand and mud, for slopes ranging from 0⁰ (level ground) to 30⁰ (very steep) and for vehicle weights up to 7500kg.

This weight limit allows to include bogged trailers. The 30⁰ slope limit is the angle of repose of dry sand, the equivalent of driving up the wrong face of a sand dune. In other words, bloody steep!

These debogging  forces are generally in line with the “mire factors” used by the US Army in their Recovery Manual for a truck bogged to its axles.

If you get bogged to the top of your wheels, double the following, or start digging.

If you get bogged to the top of your bonnet, triple them!

The information contained in these three charts can be summarized in the following Table:

When you get bogged in your 35” muddies, you are generally going to do a really good job of it.
From these charts you can establish whether you are stuffed, or really stuffed . . . 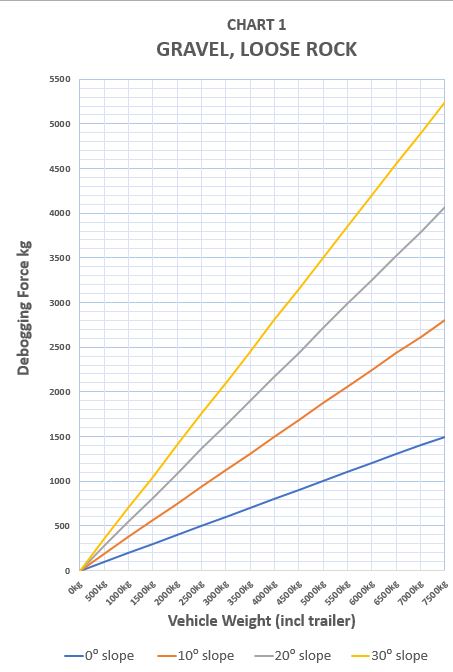 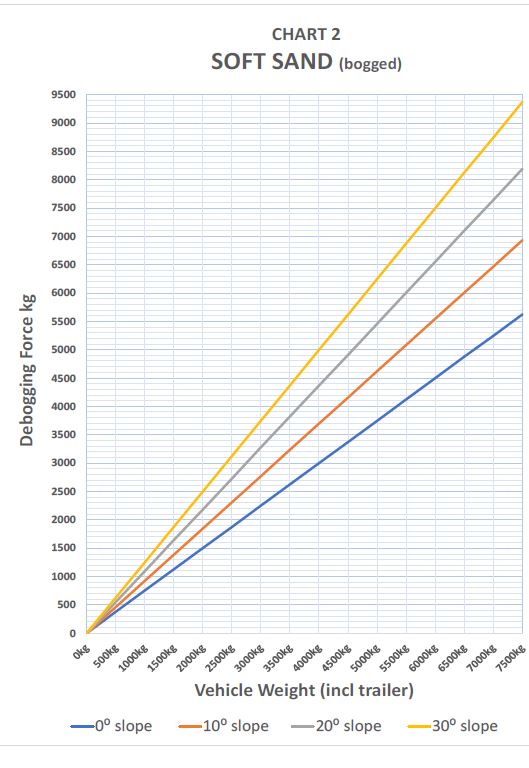 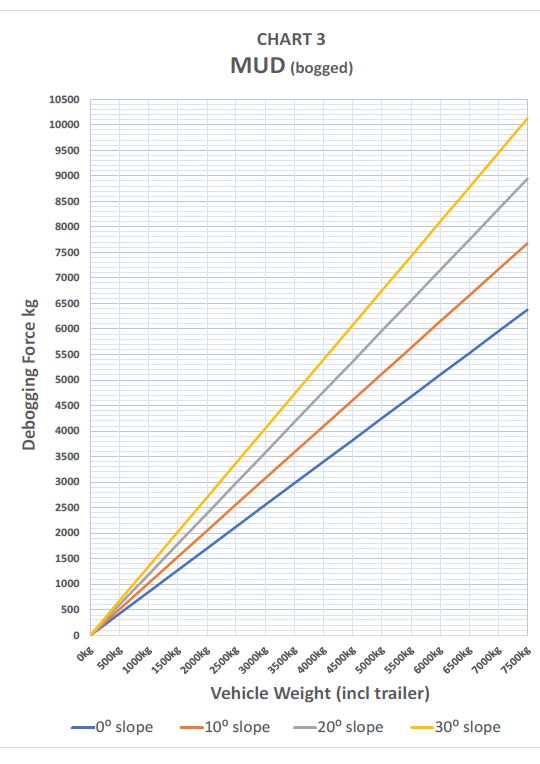 We now get to the heart of this article. One of the greatest difficulties for you the end user, is establishing whether the load capacity given for any particular item of recovery gear is a safe working load or a minimum breaking load.

As a guide, the minimum failure load used is probably around 85% of the average test load result.

An example of an MBS derived from test loading:

8,000kg snatch straps from seven different manufacturers were test loaded to destruction by a 4×4 magazine, with the following failure loads:

This gives an average failure load = 9,640kg and a sample standard deviation = 520kg

This minimum failure load for recovery gear is variously given as:

AS 1418.1, the relevant Australian Standard, defines “Rated Capacity” as the load you can apply safely.

This safe load is variously denoted as:

its Recovery Load Limit (RLL), its Allowable Load, its Permissible Load, its capacity, a Load Rating of, and its Maximum Load (see also comments under Tow Hooks)

The ratio of the failure load over its safe load is equal to the item’s safety factor (SF).

Safety factors vary depending on the consequences of failure.

For lifting applications, a safety factor of 5 is mandatory. This is used for cranes, lifts and hoists for example.

In particular a 4.75T rated shackle has an MBS = 4,750kg WLL x 5 safety factor = 23,562kg. You will never break this shackle. This is the reason why they should not be used to join snatch straps; anything they are attached to will break first, potentially leaving the shackle to fly around as a missile. There is an interesting video clip by Ronny Dahl on YouTube called “mass damage snapping winch cables”, showing a 4WD being totally smashed by a flying shackle. Well worth watching.

In the truck industry for securing loads and in the commercial logging industry for winching bogged vehicles, a lesser safety factor of 3 is used.

This because the consequence of failure is less severe than that say for a lift in a building full of people failing or a crane dropping a load. This middle of the range safety factor is appropriate mainly because the force required to recover a bogged vehicle is not well defined. Nevertheless, the recovery gear industry struggles to achieve this safety factor, see below.

For static loads where the load is not moving, an even lower safety factor of 2 is used. This is because the loads are generally well defined and there is no risk of shock loading as there is with vehicle recovery.

This safety factor would be used for example for the sizing of a wire rope used in a cable-stayed bridge.

Hence the same diameter wire rope would have vastly different safe working load capacities depending on whether it was being used in a crane, in a winch or in a cable-stayed structure.

Regardless of the above, in reality the recovery gear industry appears to have adopted lower safety factors, generally around 2, for their equipment.

For example, the recovery industry’s advice is to use equipment with an MBS = 3x the vehicle’s weight.

Reducing this guidance to an MBS of say 2x the vehicle’s weight, reduces this safety factor in the worst-case scenario down to 2 135% = 1.5, which is < 2 min say, but nevertheless is still > 1 (failure).

Thus, in the worst-case scenario it won’t break, but you are not operating in what would be considered a “safe” zone.

This concept of relating the gear’s MBS to 3x the vehicle’s weight is adopted by the recovery industry for snatch straps, soft shackles and kinetic recovery rope.

On the other hand, the winch industry’s guidance to use a winch capacity of 2 to 3x the vehicles weight is more conservative (ie results in a higher safety factor SF) than the above, because winches’ rated capacities are allowable working capacities, not MBS breaking capacities.

The underlying problem in the recovery gear industry is that there is no consistent standard for conveying the strength capacity of their various pieces of equipment.

Sometimes minimum breaking loads (MBS) are given, sometimes working loads (WLL). Often the loads are designated only as “Rated” loads and you have to trust that the manufacturer is using this term correctly, viz a safe working load or WLL.

This situation is not helped by the synthetic rope industry generally quoting a “Rated” Breaking Strength (MBS) for their soft shackles. This is a grossly misleading term, essentially implying that you can safely load the soft shackle to its rated capacity, but if you do, it will break! I suspect this sort of nonsense is written by their marketing departments to make their shackles appear “stronger”. No engineer would do this.

The following Tables give the load capacity data supplied by the manufacturers for their recovery gear. 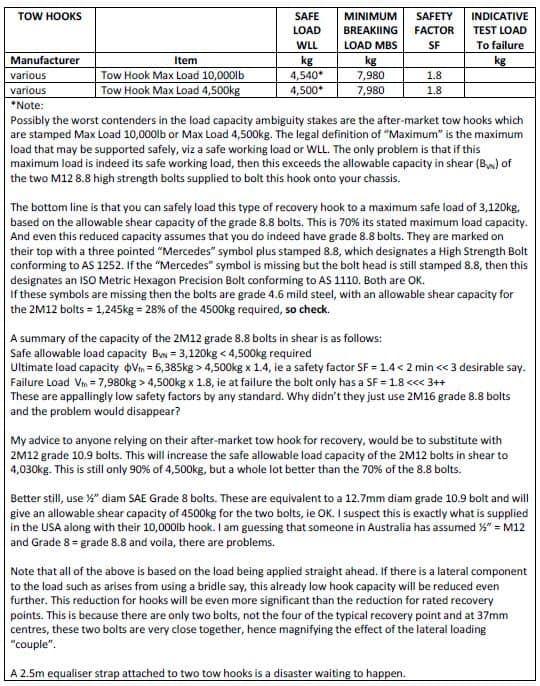 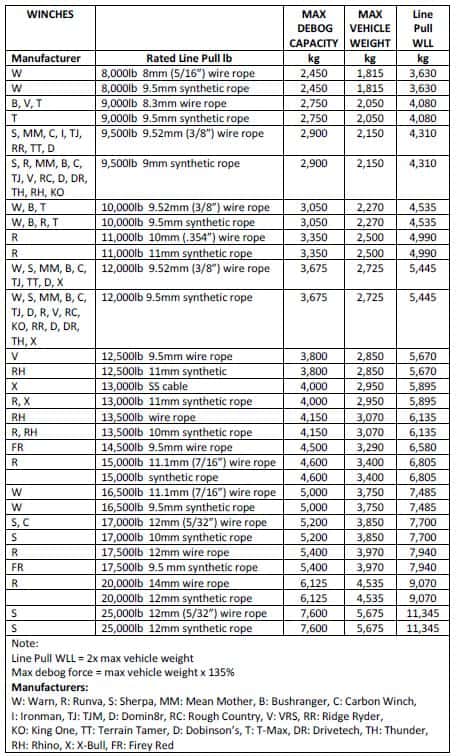 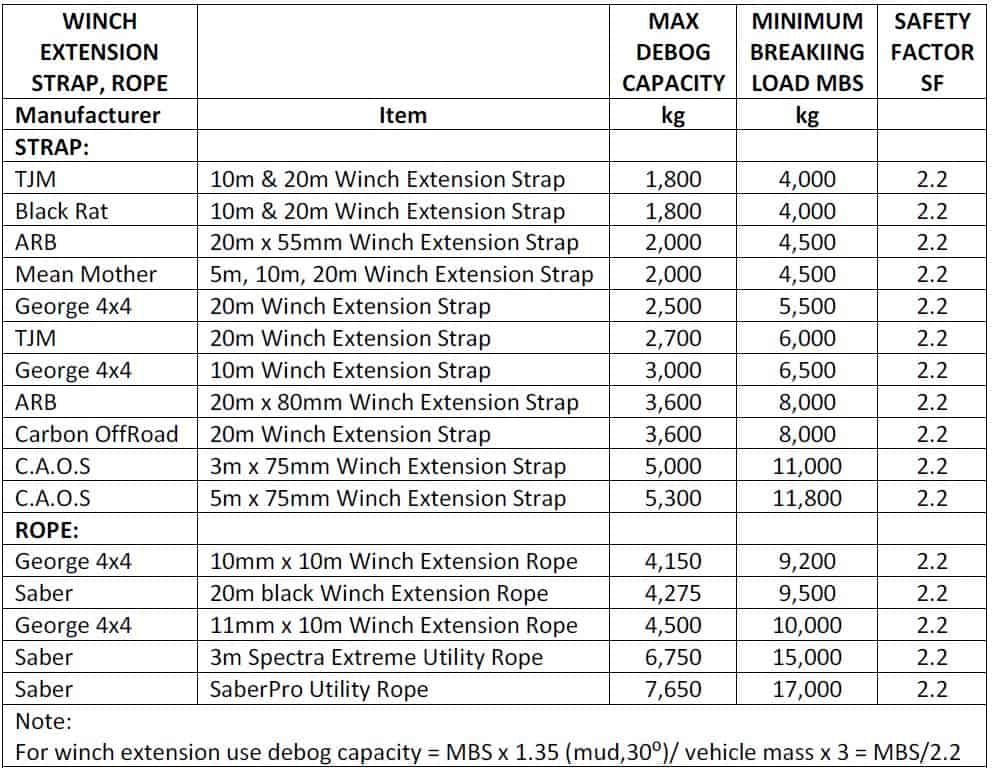 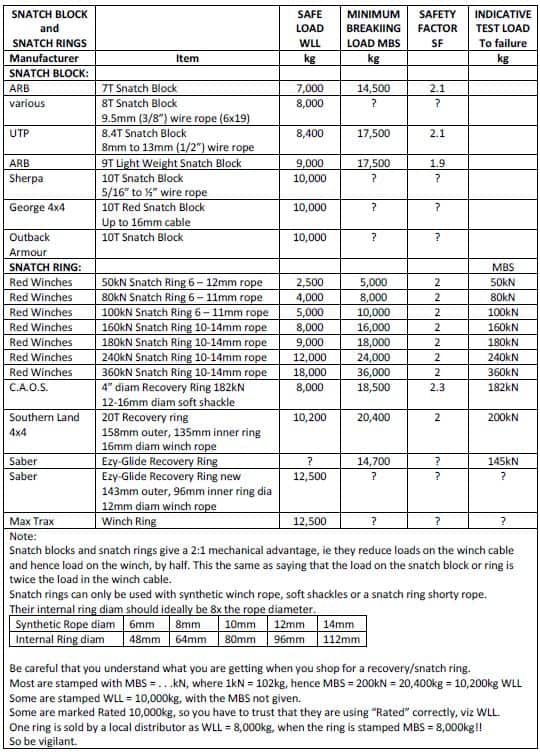 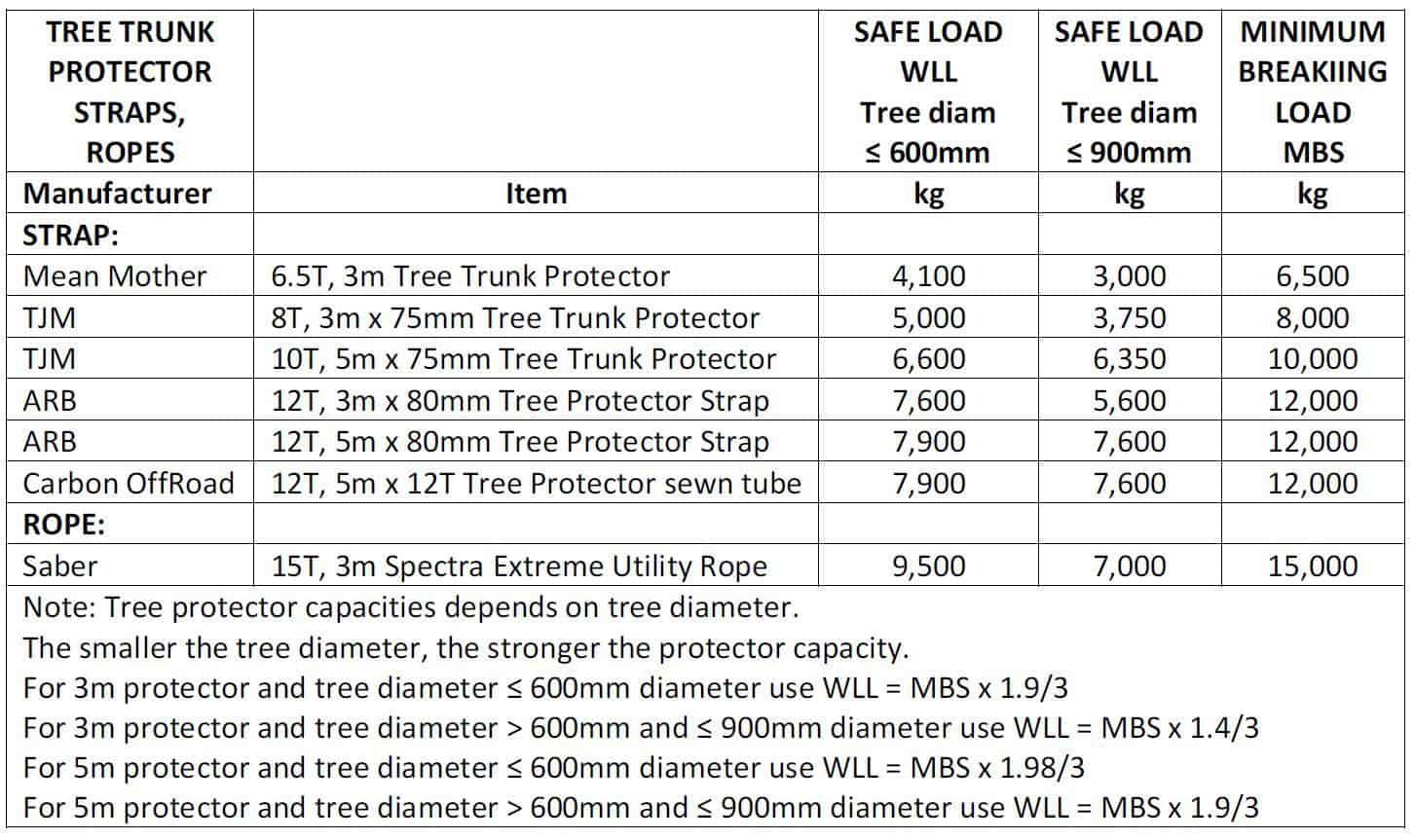 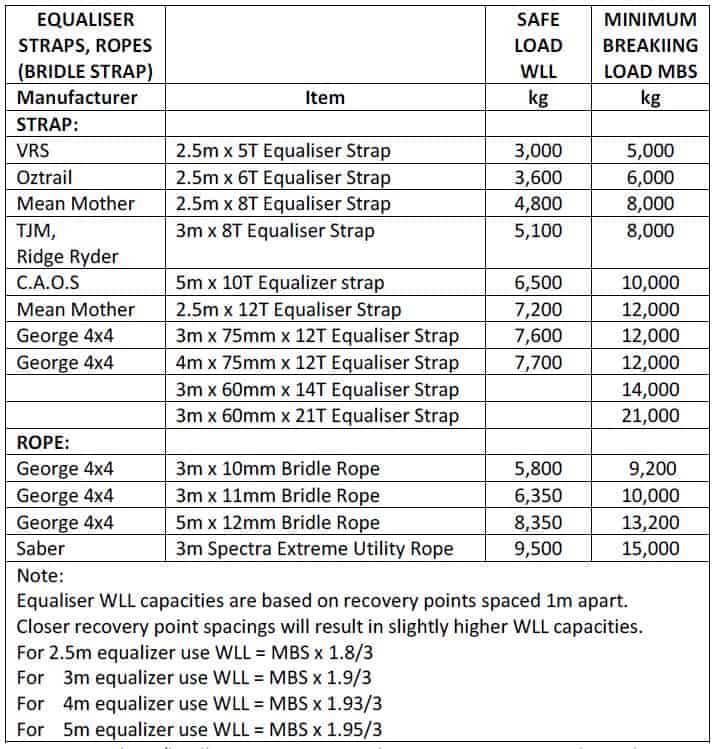 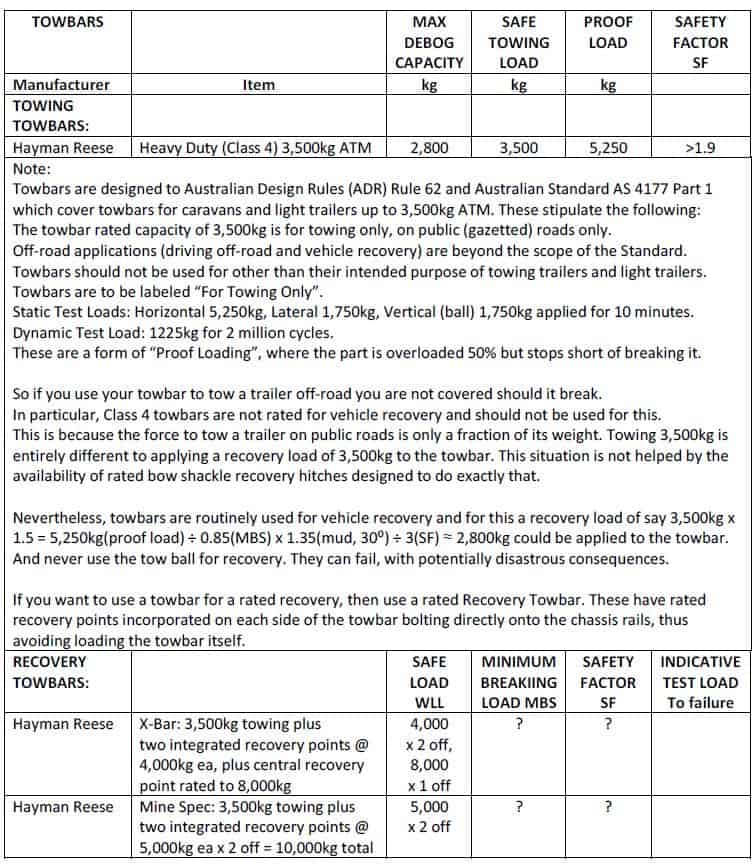 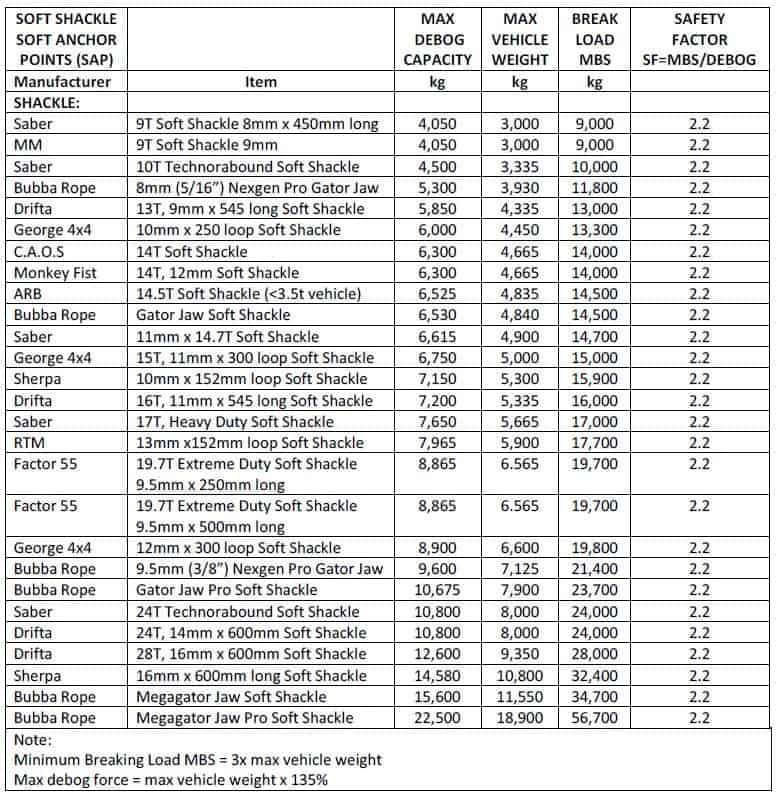 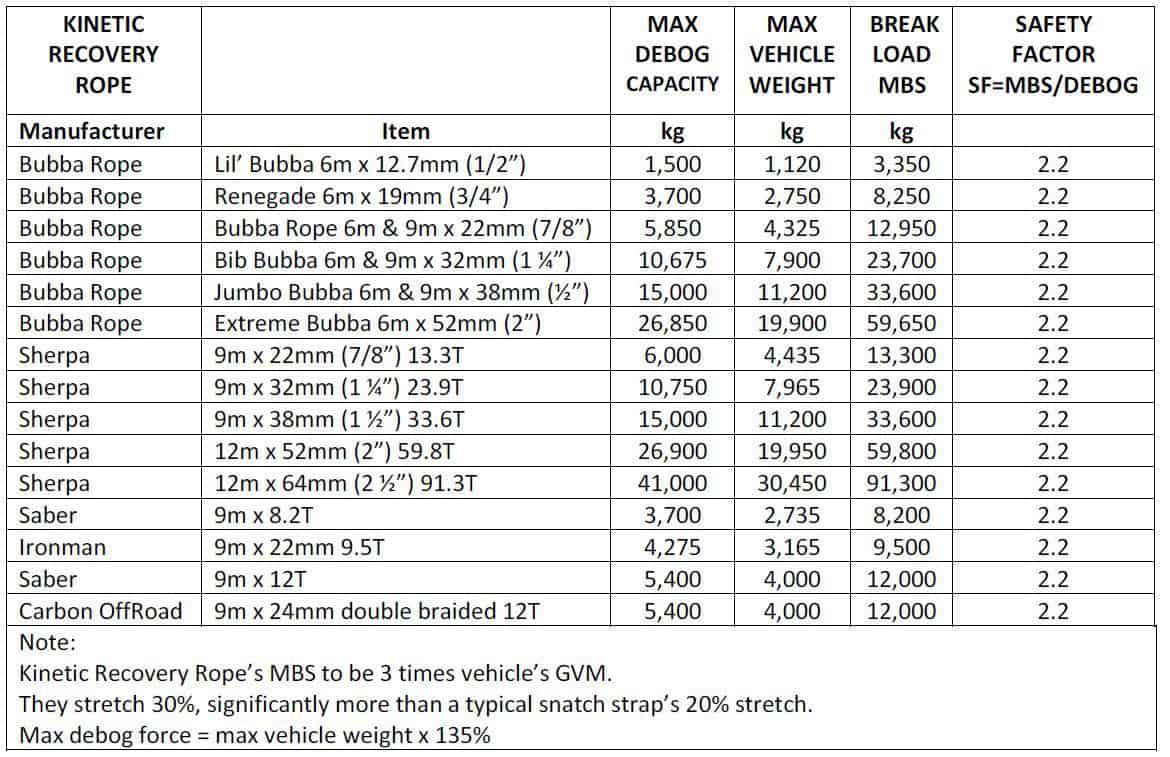 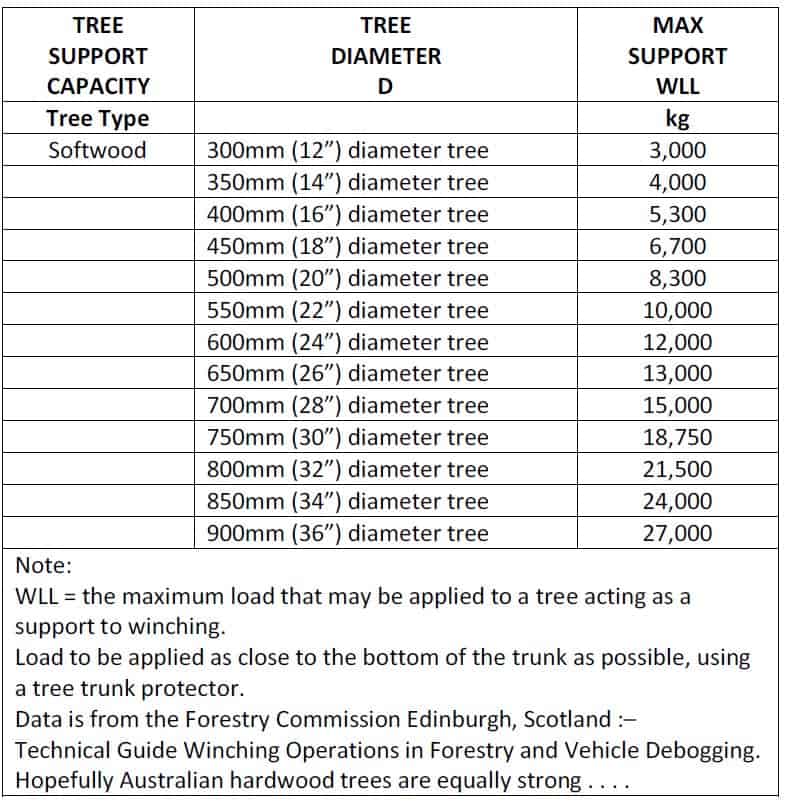 Following are ten recovery configurations for debogging forces of up to 15,200kg (15.2T) 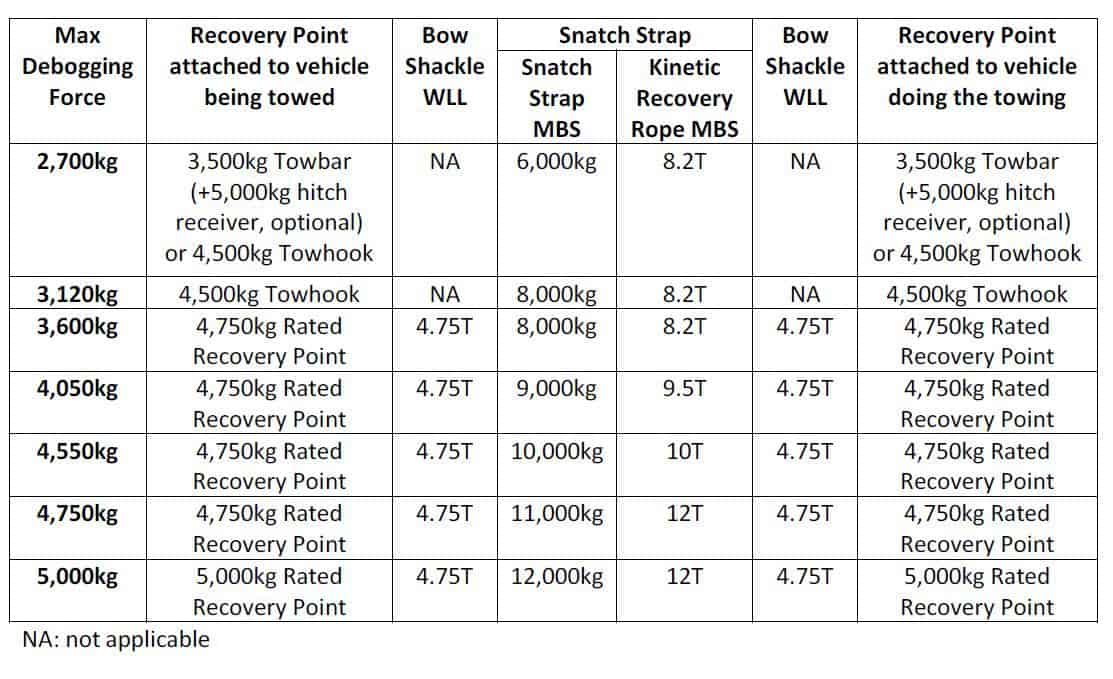 Note the following are equally applicable with the winch on the towing vehicle. 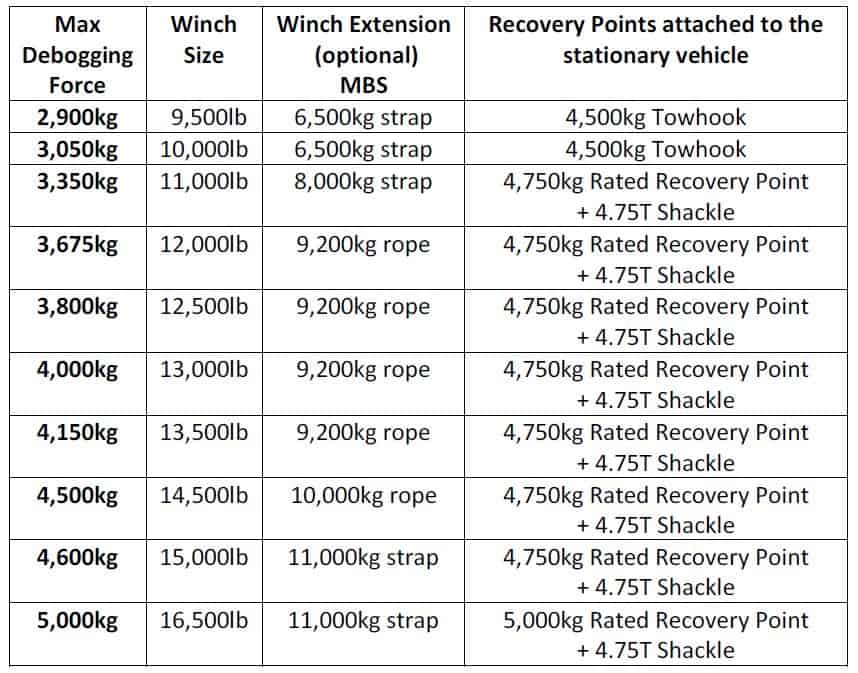 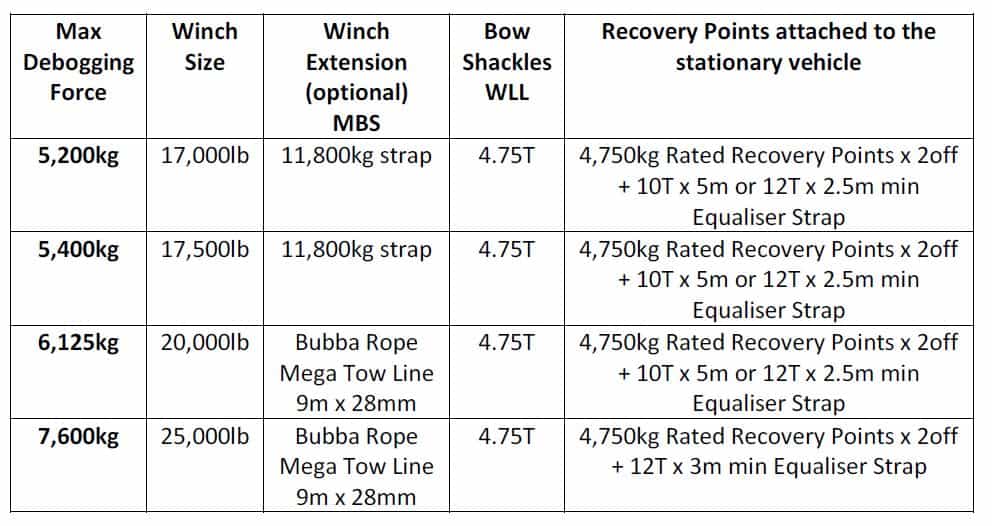 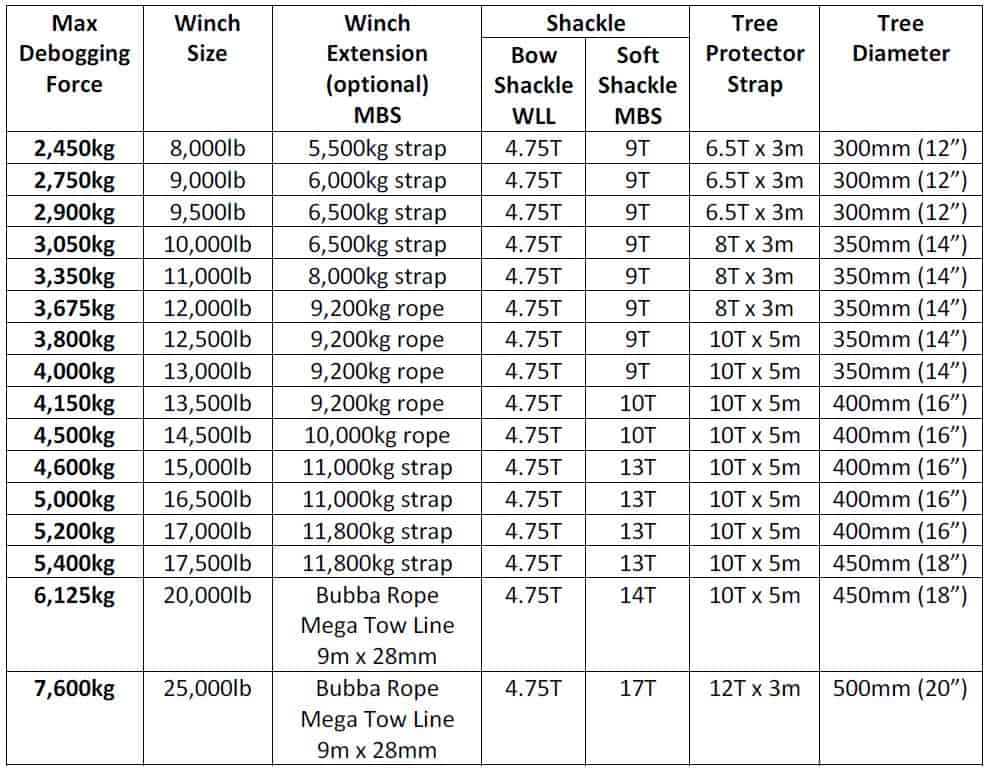 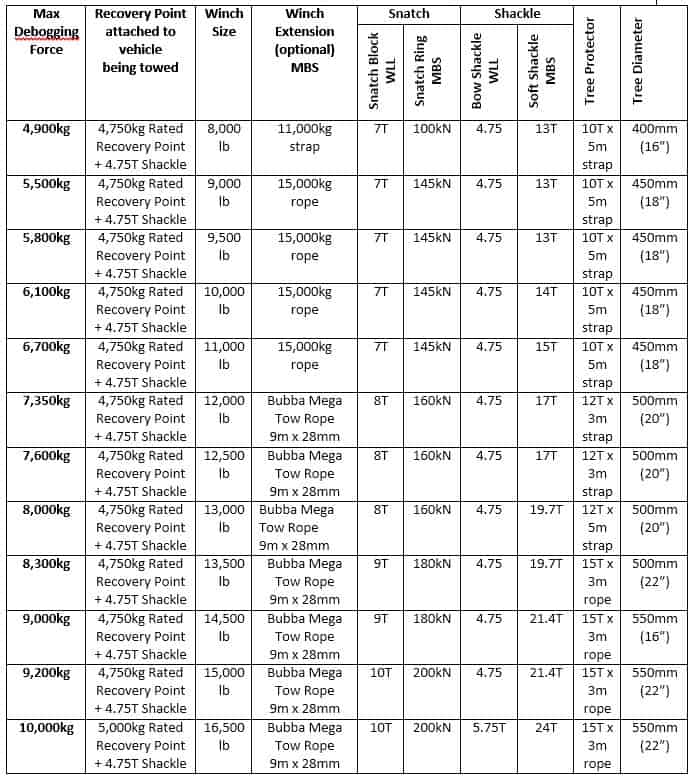 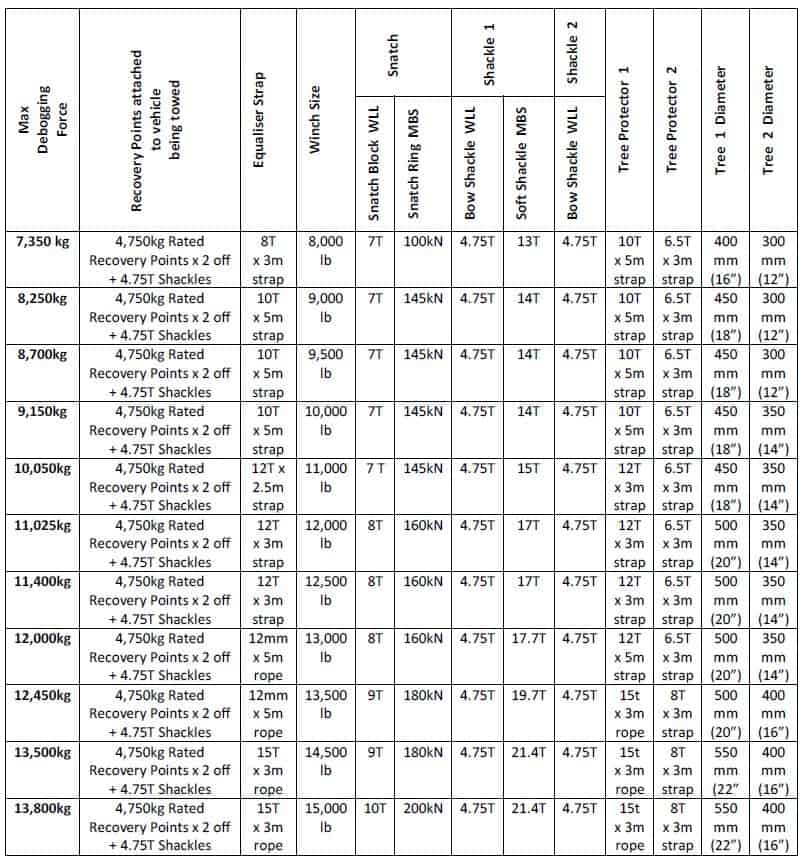 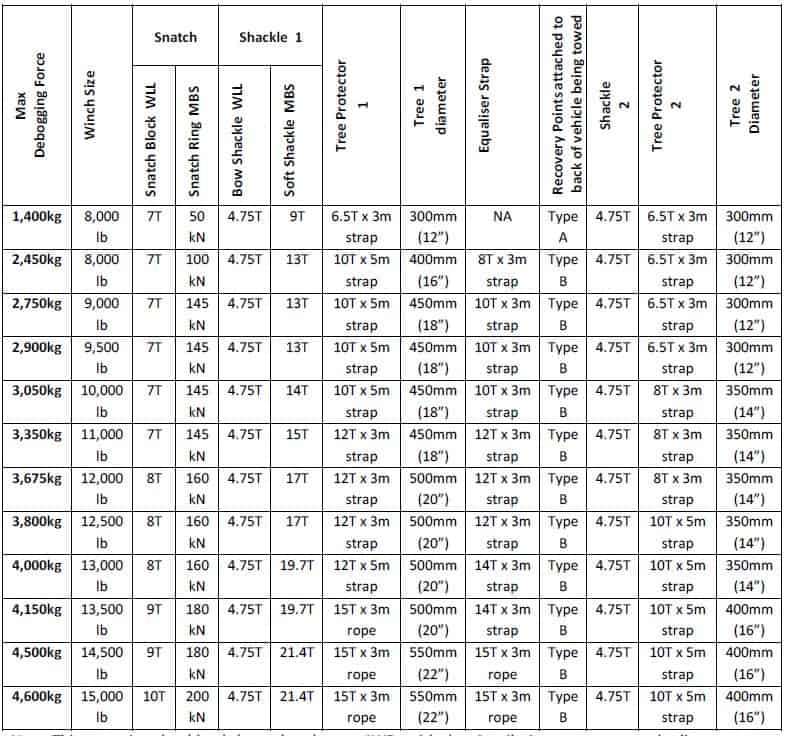 The following is a summary of the recovery gear required for vehicles up to 7,400kg GVM, for either snatch strap recovery or winch recovery with and without a snatch block, as shown in Fig 1 to Fig 7.
This covers the majority of real world applications. 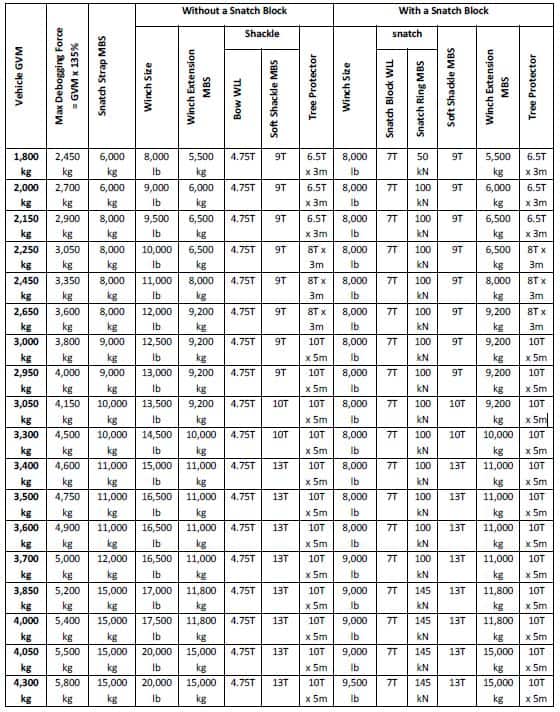 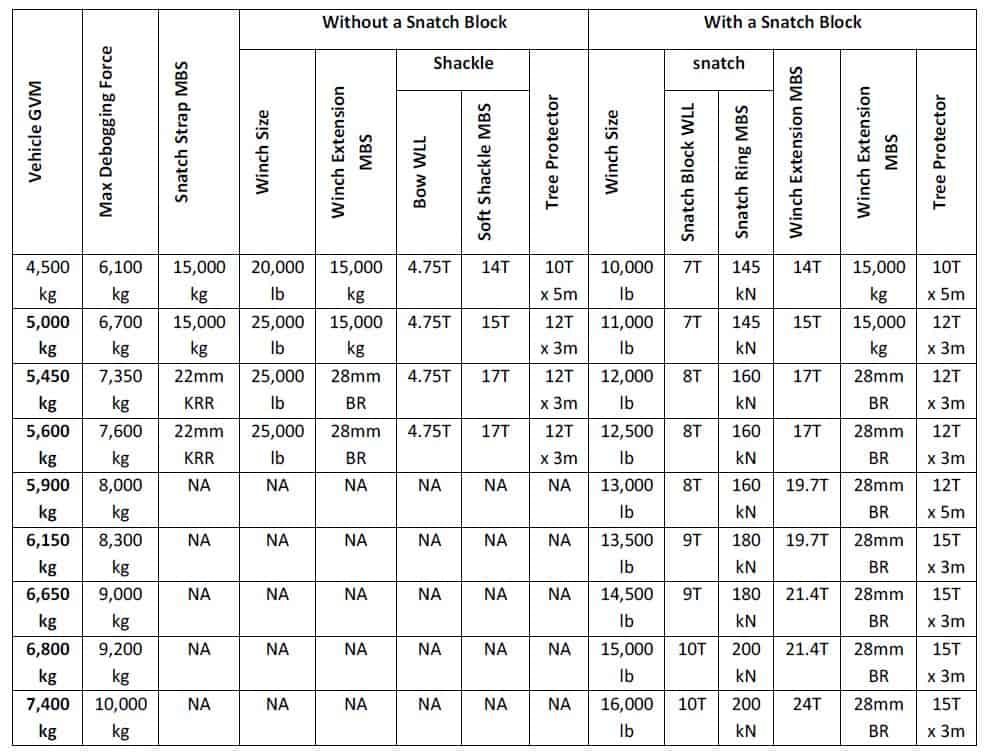 If in doubt, use a winch, a tree with a protector strap, plus a snatch block and an equaliser strap, together with soft shackles wherever possible.

A note from Aaron:

Now, if you made it to the end, and understood even a portion of this you’ve done well. I’m still looking at the tables and picking up different bits of information! A massive thanks to Ian, who has gone above and beyond developing this. Safe recoveries!