How much fuel do you need to carry for your 4WD?

Running out of fuel in your 4WD at best is a major inconvenience. Beyond that, it can do serious damage to your engine, and put your safety at risk if you are in a remote area. There are a number of ways to carry fuel in your 4WD, but you need to decide on how much you should be carrying for each trip. So how do you go about it?

Your fuel capacity should be dictated by four things; your fuel economy, range required, weight available and how much you want to pay for fuel. Often, its a compromise between all four. 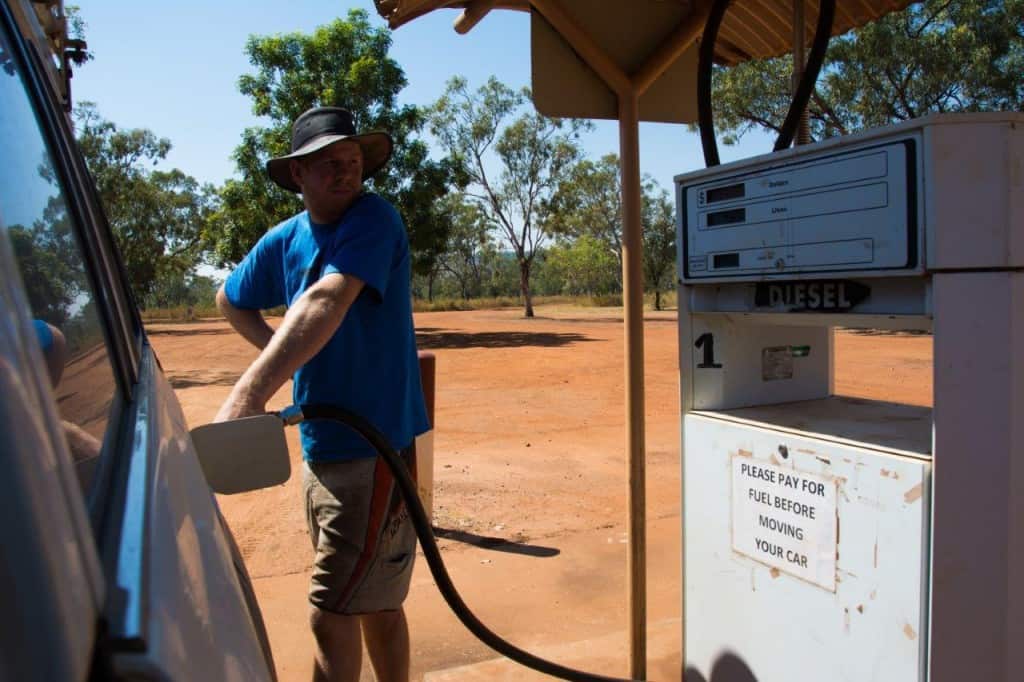 Filling up with liquid gold at Mt Barnett

4WD’s are not equal. A brand new, unloaded turbo diesel ute might get around 8L/100km. Take a 4.5 litre petrol Land cruiser though, and you can be looking at anywhere from 15 – 25L/100km. When planning a 4WD trip, you need to know how much fuel your 4WD is likely to consume. It’s actually really easy to work out – check this post out: How to accurately work out your 4WD’s fuel economy.

Remember to factor the increase in fuel usage caused by loading your vehicle up, off road driving and at least 15 % safety margin. The difference betweeen driving a 4WD down the freeway at 110km/h to slogging along a soft beach can result in huge economy changes; up to 60%! When I first bought our 80 Series, I had fuel figures up to 35 litres/100km when it was being pushed up big dunes at Yeagarup.

If you want to know more about fuel economy, check this out – 10 ways to destroy your 4WD’s fuel economy. 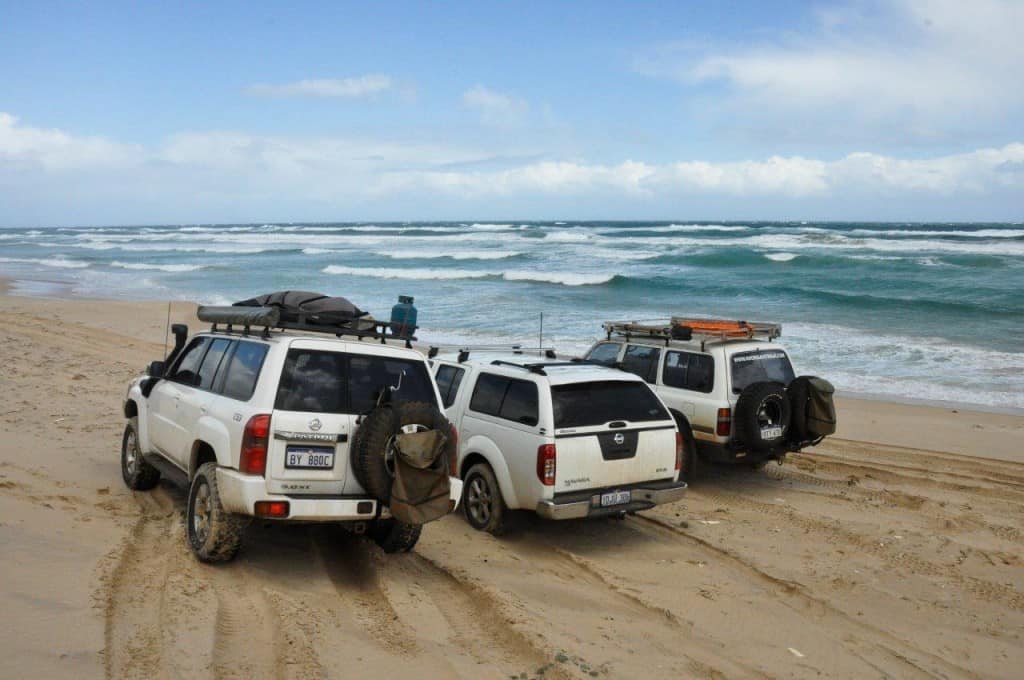 The range you have in your 4WD is calculated by dividing the number of litres on board by your expected fuel economy. Remember though, you don’t want to run out of fuel, so leave at least 20% for emergencies! On Our Land Cruiser, we have 145 litres of fuel when full, and at 16.5 litres/100km, we have a range of roughly 880km. However, I don’t like going beyond 750km!

The thing is, a big range is not usually required very often, which means you don’t always need to carry a huge amount of fuel on board. Long range tanks are a permanent modification to your vehicle that drastically improve the range, but you do also have the option of carrying jerry cans as an alternative if you don’t want the expense of a long range tank.

4WD tracks like the Canning Stock route require you to carry a substantial amount of fuel, but most people aren’t doing the CSR on a regular basis! 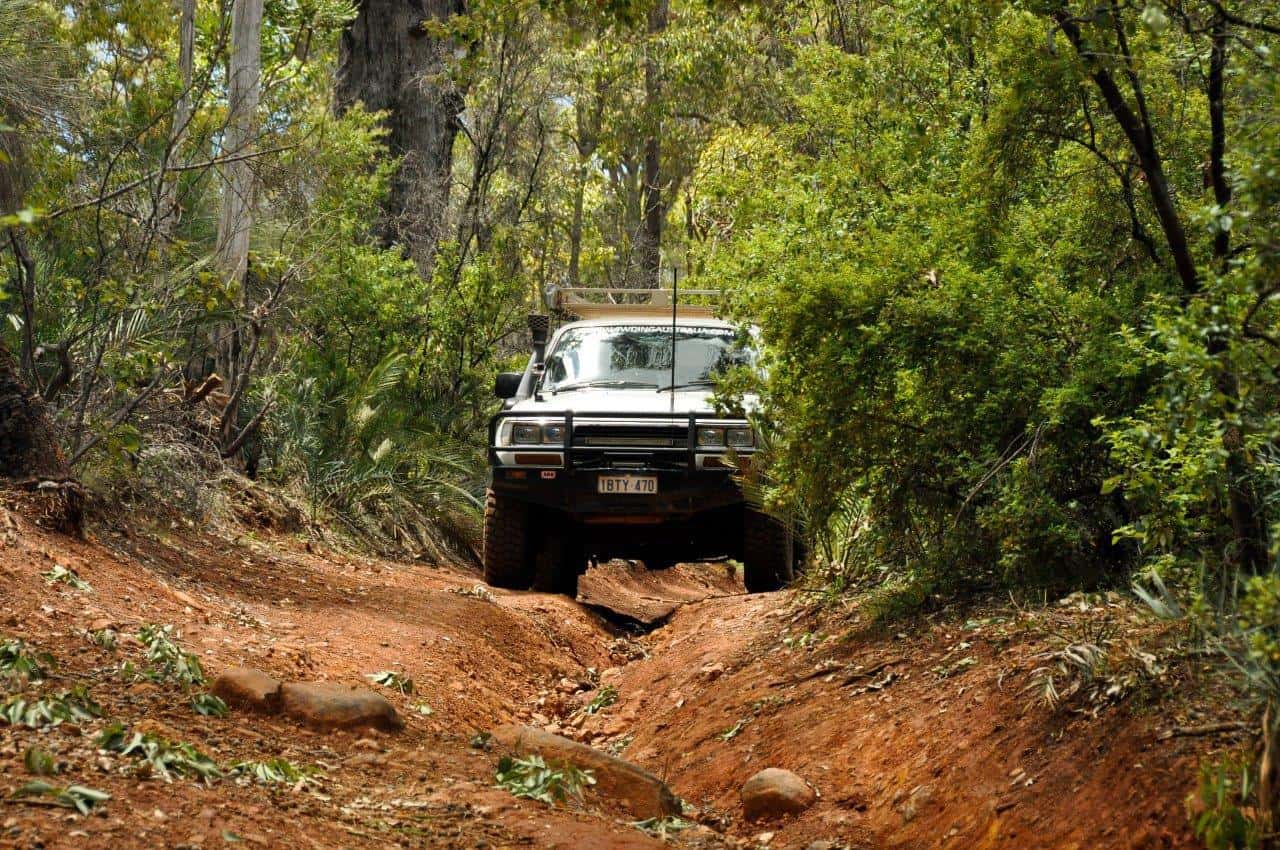 Where are you headed?

4WD’s all come with a payload (set by the manufacturer) , which usually ranges between 550 – 1100kg. This is the amount of carrying capacity you have for your 4WD, and you should not exceed this. However, if you take the time to add up the Weight of your 4WD, you will see it is extremely easy to get close to it. Fuel is heavy; its almost 1kg for 1 litre once you have factored in the weight of your tank.

If you’ve got an additional 150 litres of fuel on board, that’s pretty well 150kg of payload that you’ve just lost. Overload your 4WD, and you have insurance risks, a higher chance of breaking something on your 4WD and a vehicle that is not as safe as it legally should be.

Have a think about where your fuel is too. We know it is heavy, and having a lot of weight on the roof racks, or behind your rear axle is not good. A lot of long range tanks sit behind the rear axle, but that extra 150kg is going to make a big difference to your vehicle, and put a lot more stress on the chassis.

Remember, if you are towing a trailer, sometimes its better to carry the fuel on your trailer; it keeps your 4WD legal, and transfers the weight onto something being towed. 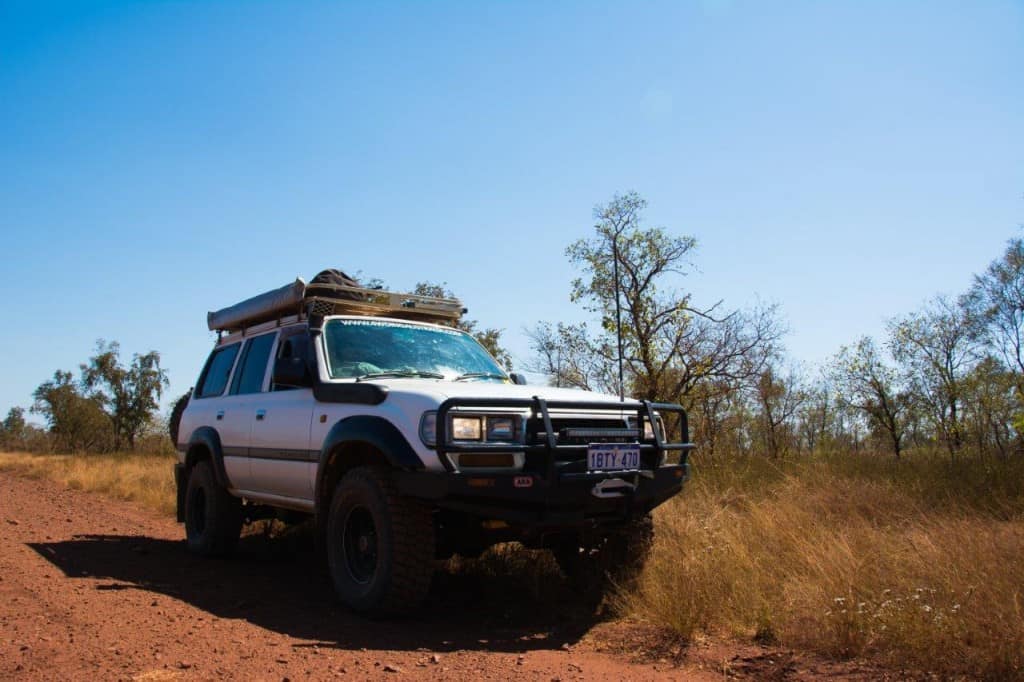 Our 80 on the Gibb River Road

Fuel is expensive. On our Recent trip to the Kimberley, our fuel costs were 32% of the total trip. That number is actually quite low because of the cost of accommodation and tours we did in the region. Often it can be up around 40 – 50%! Filling up at the bigger towns (where fuel is cheap) will save you a fortune on fuel, providing you have enough to bypass the smaller, expensive places.

Before we left to head north, I worked out that we would save about $400 by having a long range tank fitted to our 80 series, purely because we could skip the expensive fuel stops. However, there is a flip side to this; the more fuel you carry, the worse your economy, and you need a lot of expensive fuel to pay for the cost of a long range tank!

This was over the 9000km planned, with a number of expensive fuel stops in between. We didn’t end up getting one due to time constraints, and took a few jerry cans instead. 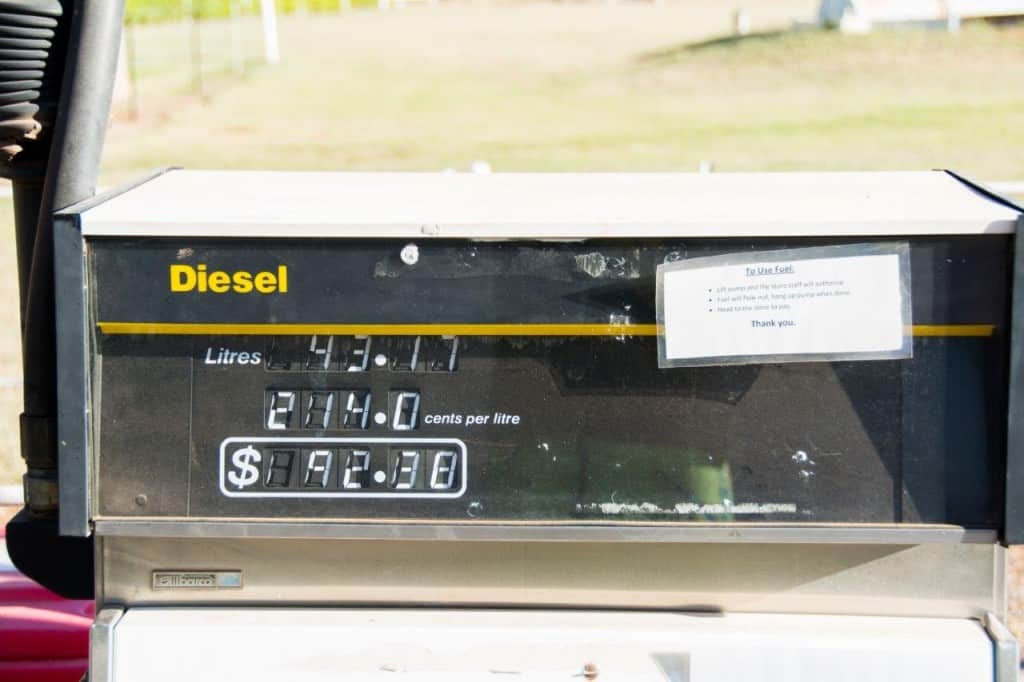 I was told a story a while back about a bloke in an old Holden who thought he’d be clever and save money on fuel crossing the nullarbor from WA. He loaded the back of his vehicle up with as many jerry cans as he could fit, full of unleaded bought at a good price in WA, and headed east.

What he found though, was that all the weight in fuel in the back of his car made it use a lot more fuel than it would normally, unloaded. This meant he had to work his vehicle hard, and ended up using a lot more fuel (and money) than he would have by just filling up at the stops across the nullarbor!

You are restricted by the amount of weight you can carry, where you can fill up, how much fuel your 4WD uses, and your budget. Make the best of the situation; you can’t have the best of everything.

How much fuel have you got for emergencies?

Things don’t always go to plan. You may have to double back for something, or your 4WD may decide to drink 10% more fuel than what you’ve budgeted. Always take more fuel than you need.

This is not just a good idea to prevent a forced stop in the middle of no where, but it can affect your safety. If you break down in the middle of the desert, you can easily put your lives at risk. Australia is a huge place, and you don’t want to be waiting for the next person to drive by! In many places of Australia that might not be for several days!

You want to take at least 20% more fuel than you accurately estimate you are going to use. If you can’t do this, then you need to have options to fill up along the way. Don’t leave it to chance that you will have enough fuel, because the consequences of not having enough can be deadly. Obviously, this can be adjusted to your circumstances; if you are just doing local tracks the danger is much less than running out of fuel in the middle of the Simpson desert! 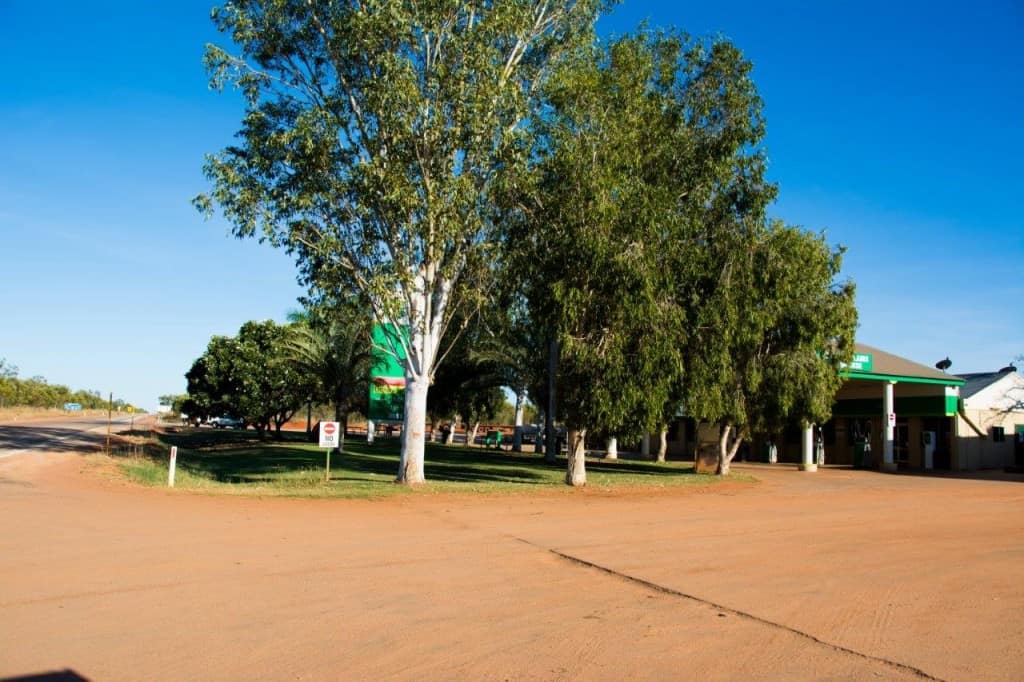 How much fuel have you got before you see one of these?

How do you carry fuel?

Generally, there are 4 ways you can carry fuel for your 4WD. Jerry cans are a great, cheap and portable option. A long range tank is also another option as are the factory fuel tank (s). The fourth, and less known was to carry fuel is in a fuel bladder. You need to check the legalities of doing this, but it is becoming more and more common for people to make use of odd shaped areas in their car by using a fuel bladder. 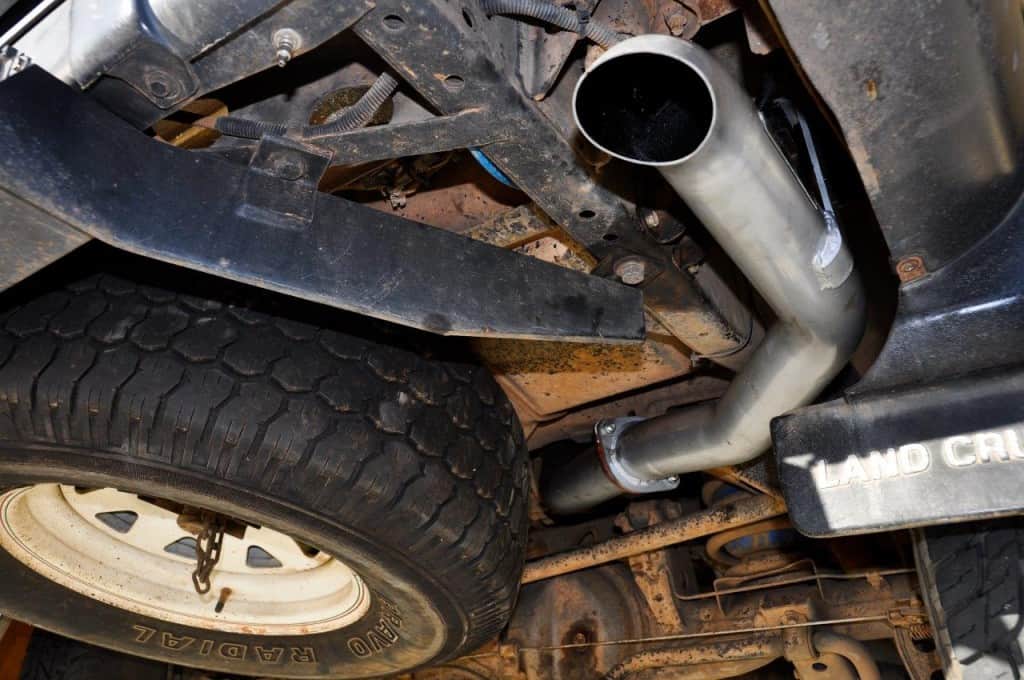 The sub tank in our 80, above the spare tyre

This is a topic you could discuss all night around a camp fire. Some people refuse to use jerry cans and others absolutely hate long range tanks with a passion. There are a number of pros and cons to each. Jerry cans split your fuel, so if you have a leak, you don’t lose everything, They are also easily moved around the vehicle or trailer to balance the weight better. They cost virtually nothing compared to a long range tank, and can be removed when you don’t need the extra range.

On the other hand, a long range tank allows you to lower your center of gravity, carry more fuel than is easy with jerry cans, fill up and use the fuel with ease. Long range tanks are not without downsides though. They are not cheap, you usually lose some departure angle and  all of your fuel is in one place. Spring a leak, and you are in major trouble!

I can however, make a number of general statements to help you make a decision

At the end of the day, you need to carry enough fuel to get you from your chosen start to end, whilst having some in reserve. Excess fuel on board is not a good idea, but its better than having too little!

How much fuel do you carry in your 4WD? What’s the most you’ve had to pay for fuel?