LED technology has come a long way over the last 5 years. This, in turn, has made LED light bars substantially more affordable, even for the better quality units.

I ran a 600mm Narva LED Light bar on the 80 Series Land Cruiser, and it did a pretty good job, but was limited in distance and overall coverage. Every year that goes by lights for 4WD’s get better and better, and cheaper too.

When it came to planning the Dmax build, I looked at the chances of hitting something at night in the early days of our 3 month trip away, and couldn’t justify not installing something to give me a bit of extra distance. I wasn’t initially going to get anything, but to risk your 4WD for a few hundred dollars just seemed stupid to me.

Stedi is a name I’d heard of many times from various places, and I did some research into what they offer. They are imported products, but the difference is they come with a 5 year warranty, have an Australian physical presence and have a lot of extremely happy customers.

When looking around for a Stedi ST4K review I found plenty of positive vibes, so the choice was made, and we had a good look through the Stedi Lights range.

I wanted to steer away from spot lights, whether halogen, LED or HID, so a light bar was the obvious choice. Stedi Driving Lights have a great reputation too, but I was wary of blocking any further air flow through the radiator, so the light bar mounted up high seemed a better option.

Flicking through their website, I noticed you could get bars all the way up to 50 inch, and knowing that the WA regulations for light bar mounting positions had been amended a few months ago, allowing you to mount them legally on the roof I was in a pretty good position.

If you want to know more about the different positions you can run driving lights and light bars, check out Where can you mount LED Light Bars and spotlights?

I ended up buying a 42 inch ST4K Stedi light bar, which comes with the harness to wire it up, and I purchased an anti theft kit, which comes with 2 special nuts and two sockets to suit, to undo them. Keen to see an honest Stedi Light Bar Review? Keep reading! 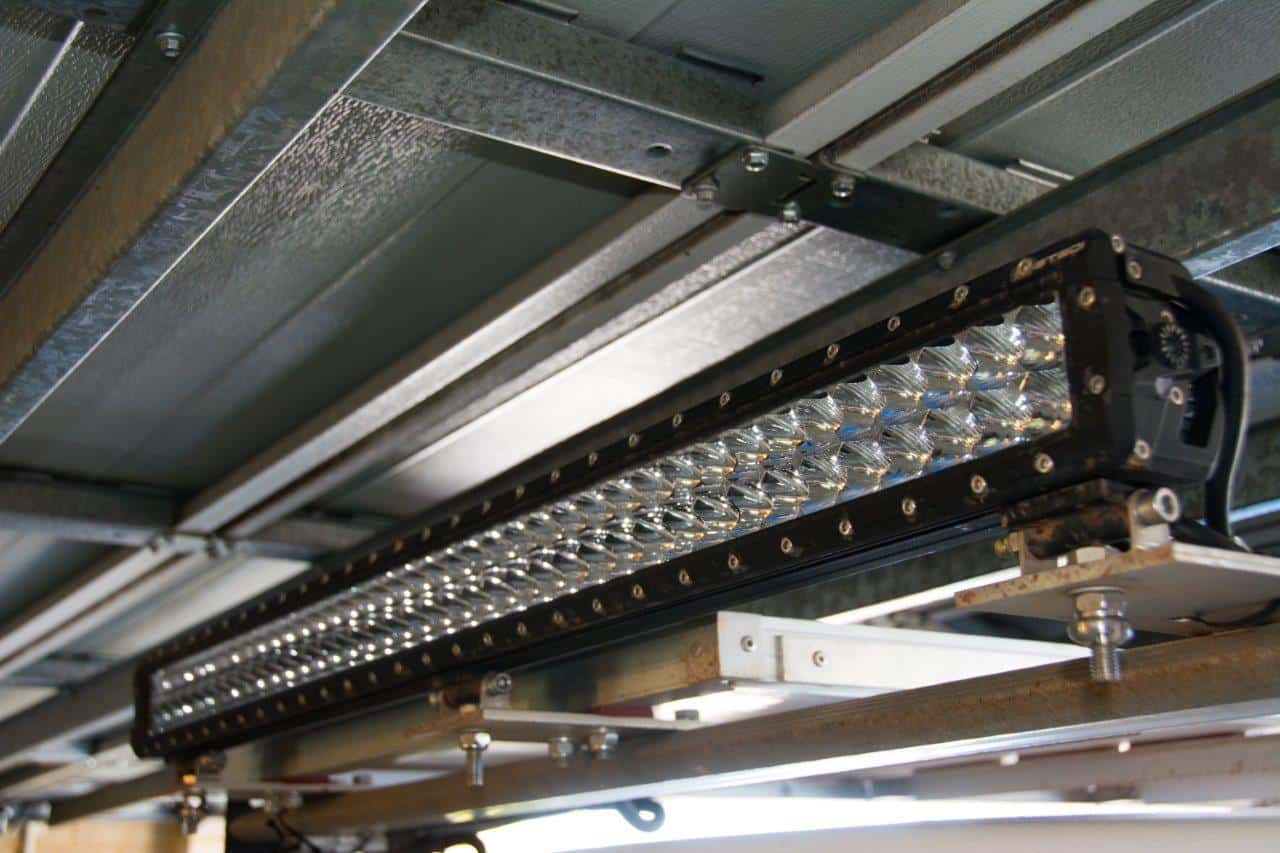 The wiring was done by a Perth mobile auto electrician, who also commented that he’d seen lots of happy customers from Stedi.

Mounting the light bar was a bit time consuming, as I had to mount a 200W solar panel as well, and wanted the light bar to shine properly. I ended up mounting it quite high, as the canopy starts 2/3 of the way back on the car, and you’d have a very hard time clearing the roof of the vehicle with the light if it was down too low.

The actual installation of the bar, once I’d set up my mounts was very simple, quick and straight forward.

This thing pulls a whopping 18 amps of current, and I was quite shocked when I turned it on for the first time. I took it out the back of an industrial area and set the angle better and have since used it for our 3 month trip up north and a number of years since.

It is invaluable for night drives, turning the darkness pretty much into day, with good side coverage but an extremely intense spot way in the distance. I was actually surprised that manages to send the light so well straight forward; I was expecting a lot more scattered light everywhere.

In fact, if you turn the bar on, and walk to the side of the car, you don’t have to walk very far at all to be completely out of the beam.

At $350 I think its cheap insurance; if it stops me from hitting one animal on the road, its paid for itself. 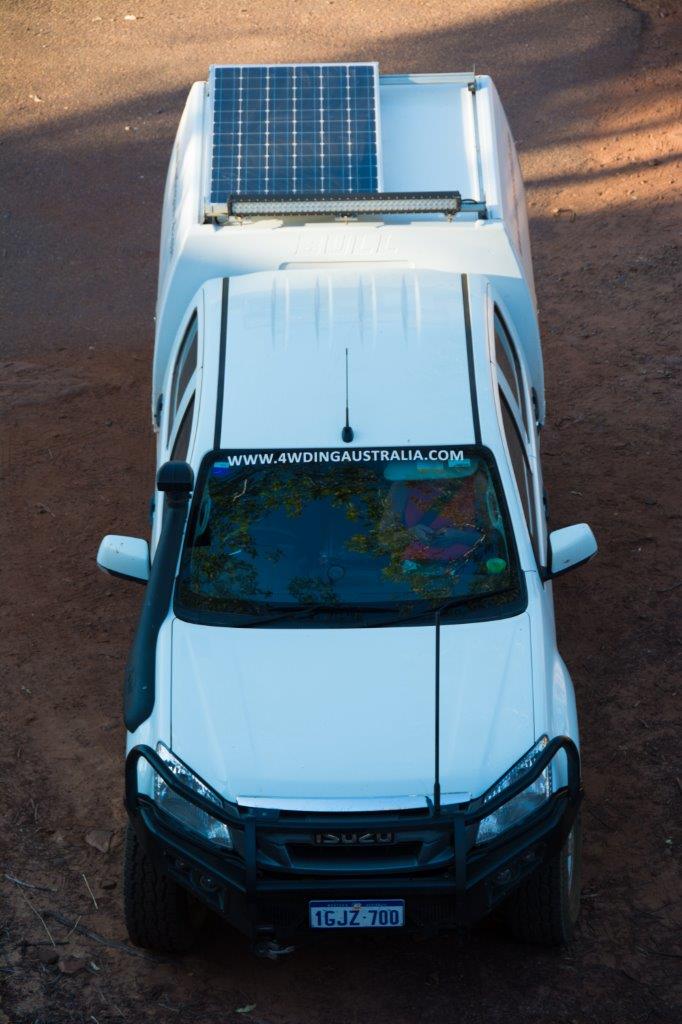 The light bar from above

Does it shine on the bonnet?

If your LED light bar shines on the bonnet, you need to do something about it. Not only is it dangerous for you when driving, but its tiring, and completely avoidable. If you look at the Dmax side on, and imagine a string drawn from the LED light bar to the top of the bull bar, you will see that it is physically impossible to have light shine on the bonnet, or bull bar.

If you want to know more about this, check out How to stop your LED light bar shining on the bonnet.

The roof of the vehicle physically stops any light passing through in that area, so no, it does not shine anywhere near the bonnet or bull bar. The light starts about 3 metres in front of the car. 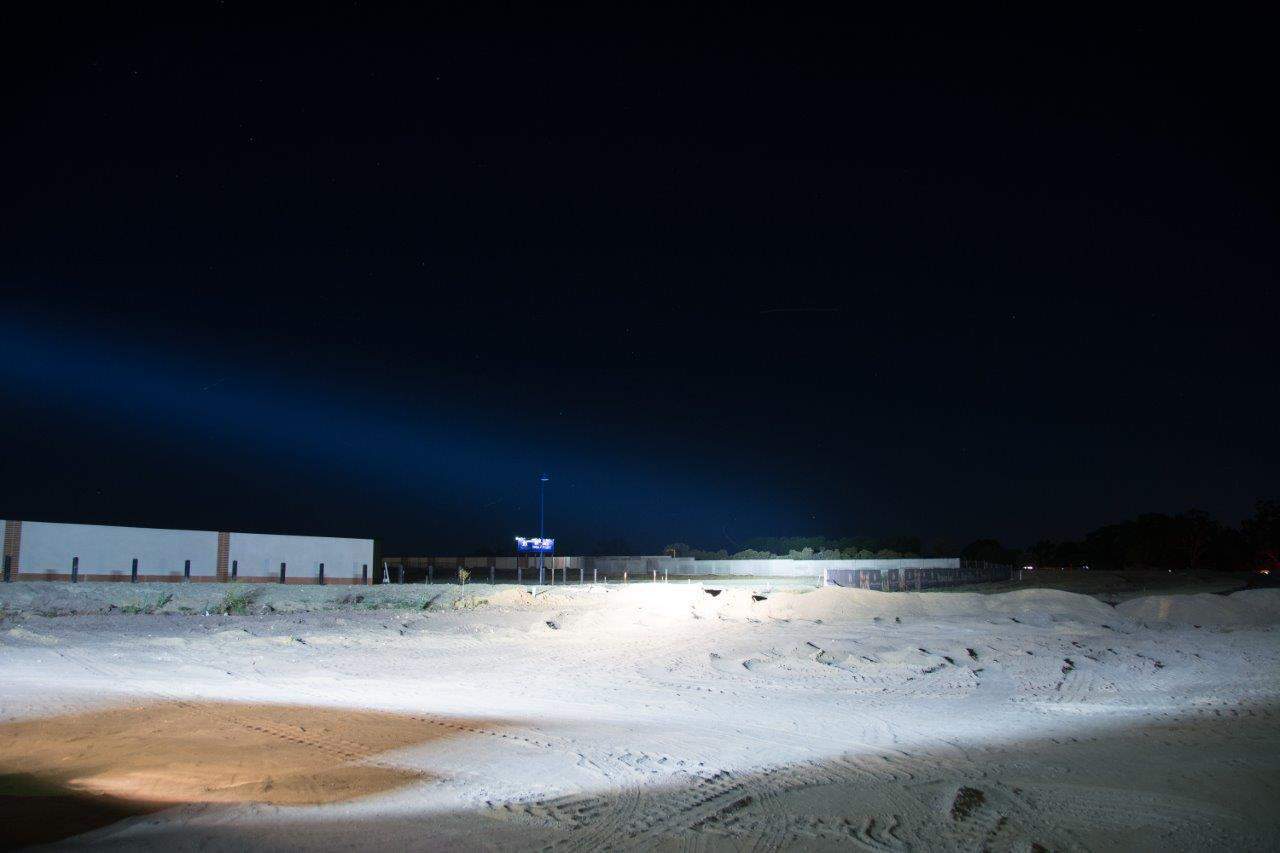 A great spread of light from up high

In the interest of being completely honest, there are a couple of things I will comment on:

Because of where the light bar is mounted on the Dmax, it does provide extra wind resistance. Thankfully, not any extra noise, but I am sure it does hurt my economy a little. Ideally, the lower it is the better, but it will affect the lights ability to work. This is the only legal place you can put such a big light bar, and I wasn’t keen on a smaller one under the bull bar as it stops air flow through the radiator.

Copper wiring quality not as good as it could be

When I saw the auto electrician stripping the sheath of the cable, I noticed it was silver coloured, and asked him about it. He said to me that it’s just cheaper quality copper, which is possibly true. That said, the wiring harness is good quality, and he commented on it having a proper relay and that he was happy to use it because of this.

I’m going to throw a curve ball in here, and mention the name Fyrlight. If you haven’t heard of them, check them out here. They are still selling Halogen lights, and are dead against LED’s and HID’s because of the white coloured light they put out. Fyrlight are saying that the best colour lights for seeing properly down a road are the yellower ones, especially the light colour made by halogen globes.

Their spotties retail for $599 and $900 a pair, are fully rebuildable and run off a 24V transformer. They also use a lot of power. I’ve been in a vehicle with the $900 pair, and initially you aren’t overly impressed with the light, but it is a great colour, its not tiring and I believe Fyrlight are probably correct in their marketing. If you spend a lot of time driving at night these are probably your best bang for buck option.

That said, the bar for me is a compromise. I didn’t want to spend that sort of money, and spotlights are not great for low speed, 4WD work, which means you still have to do something about that. I find the LED colour fine; it may not be as comfortable or as effective as Halogen, but it does the job for me.

One of the things I commented on with the bar, is that you often don’t get much time to dim your lights when oncoming vehicles cross your path. Unless they too have an epic light setup, this bar just drowns their lights out, and you don’t see them until you literally see them.

I don’t like this, as there’s nothing worse than being blinded by someone’s lights, so I pay extra attention for oncoming vehicles and dip the lights as soon as possible.

Overall, I’m very pleased with the setup. Its bright, its got a good warranty, its well built and it does what I want it to extremely well.

On the way to work one day I saw a Ute that was set up very similarly to mine, and he’d mounted the light bar almost level with the top of the canopy, which got me thinking. All I had to do was flip the bar over, and hang it from the brackets instead of sitting it on top.

Of course, the mounts didn’t line up exactly and I was lucky to have enough lead left to flick it, but it only took an hour or so and now the light bar hangs down. This reduces the wind resistance and the vehicles height (which was within 10mm of my garage driving in) .

It did however, make the light bar (or roof racks behind it) whistle at times which is rather annoying. It also makes the light start a bit further away from the bull bar when driving as the roof blocks the light even more. It’s not enough to be a problem, and I’m happier with the light bar in this position 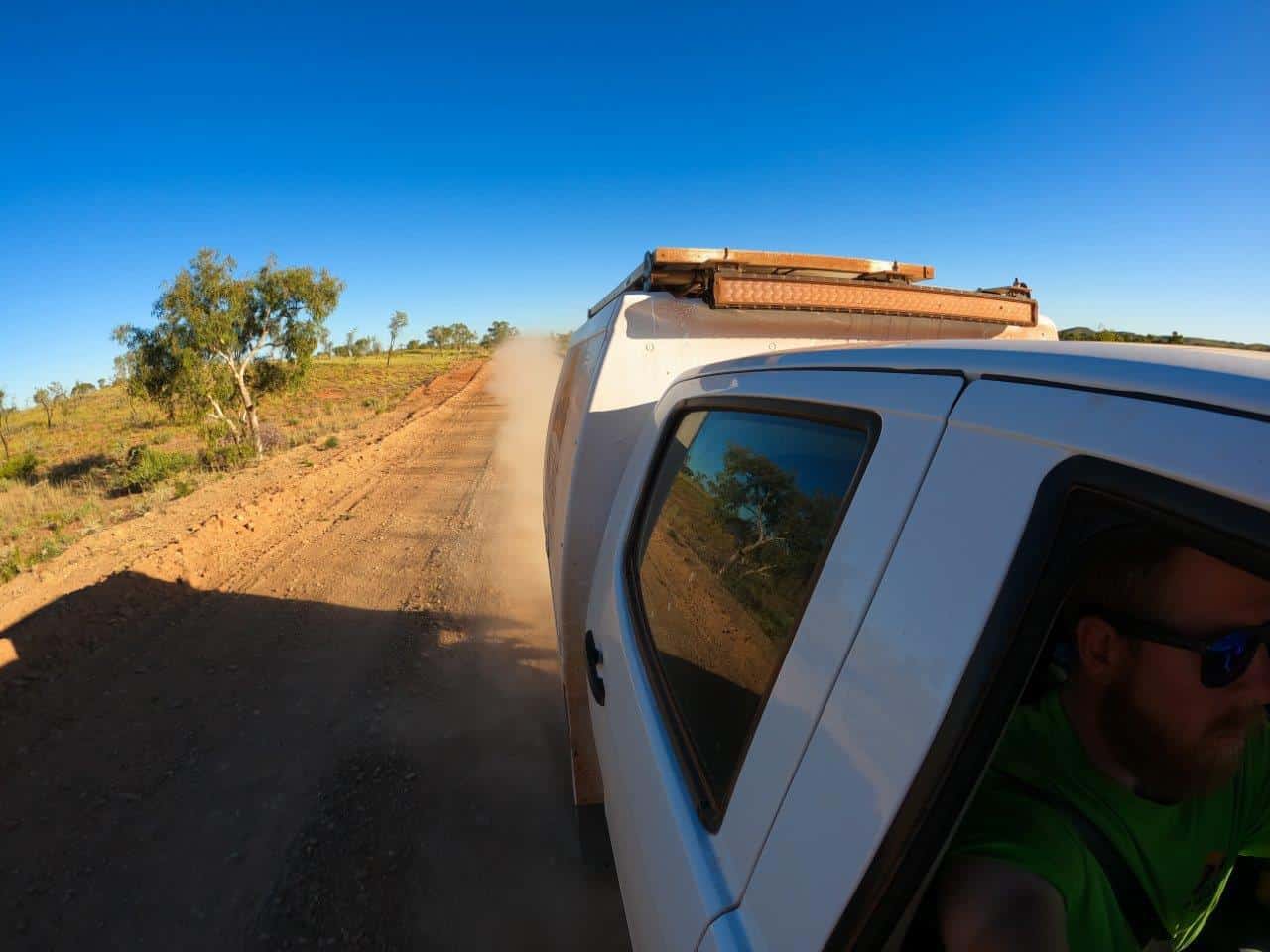 Now the Stedi bar is under the mounts

It’s been 4 years now, since we fitted the Stedi ST4K LED light bar, and its still performing flawlessly. There’s no fading of anything, no water ingress, no damage and its still bright as. I’d happily recommend their products, as do many other owners. Stedi Lights review ticked off as meeting our level of quality and price!

To be fair the vehicle is undercover for most of its life (unless its being used) and we do look after our gear, but I’d have no issues recommending the Stedi brand.