If you are thinking of heading up the coastline from Perth, and are planning on stopping at a couple of the amazing coastal camp sites on your way up, there’s something you need to know about, and they buzz, and make honey! 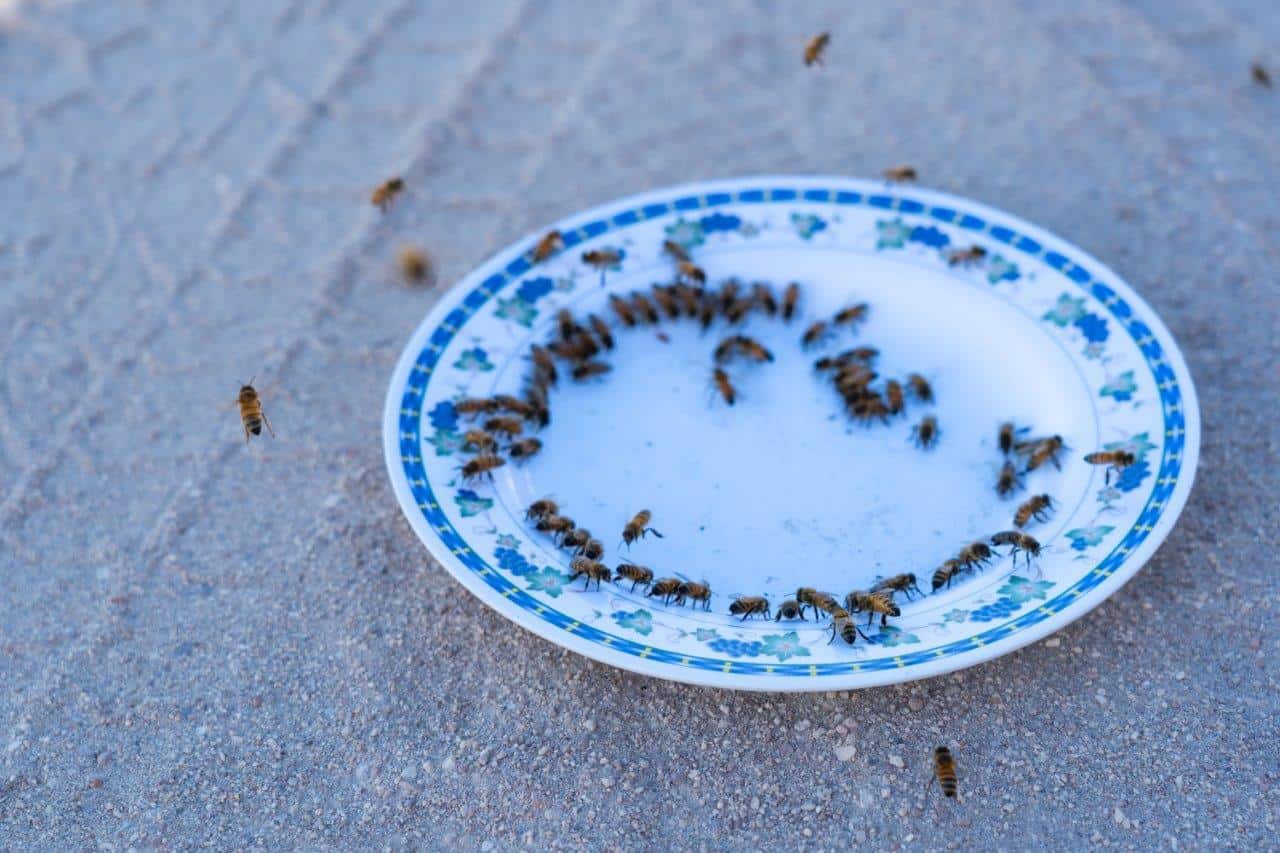 We’ve stayed at a huge number of camp sites between Perth and Kalbarri, and there’s some absolutely stunning camp sites only a few metres away from the beach. However, they all have a Bee problem when the temperatures are really warm, and it can be unpleasant, difficult and downright dangerous depending on how your body reacts to getting stung.

Our first experience with these Bee’s was at Sandy Cape in summer time, where we’d set up a fair distance south of the main camp ground, and had hundreds of bees visit our camper trailer, and hang around our sink, taps and anything else that had moisture.

The Bee’s were so bad that you actually struggled to cut tomato up to make a sandwich, and it made for an interesting stay. Sarah’s allergic, and quite afraid of Bee’s, which doesn’t help the feeling of relaxing on a camping trip! 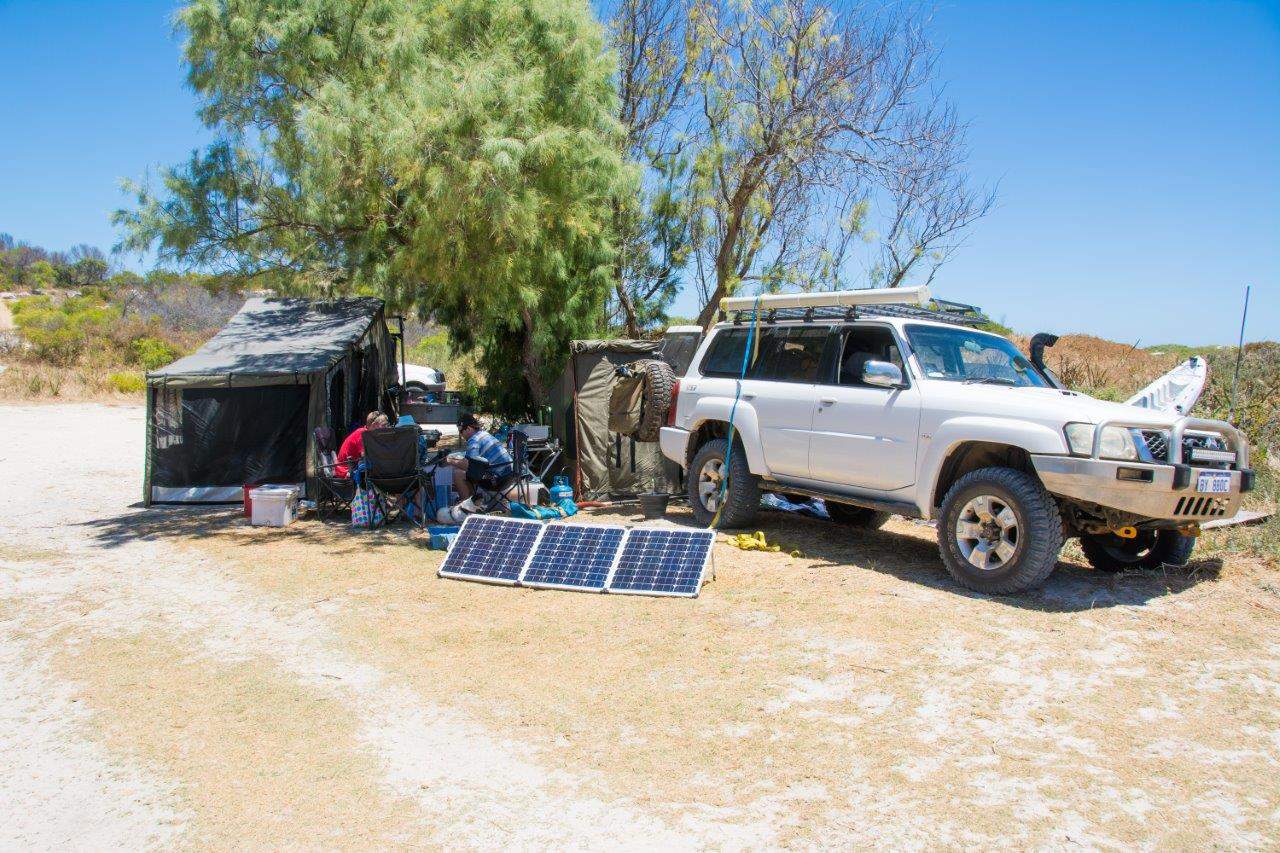 However, the worst Bee’s we’ve ever experienced were at Freshwater Point, just south of Dongara. On the first afternoon they started to hang around our camper trailer, and would land on you in decent numbers when you had wet bathers on.

We decided it was worth while setting up a couple of bowls of water away from camp, but they didn’t seem to find them, or use the bowls. Next, we moved to using plates and platters of water, and the bee’s found them towards the afternoon and hammered them. 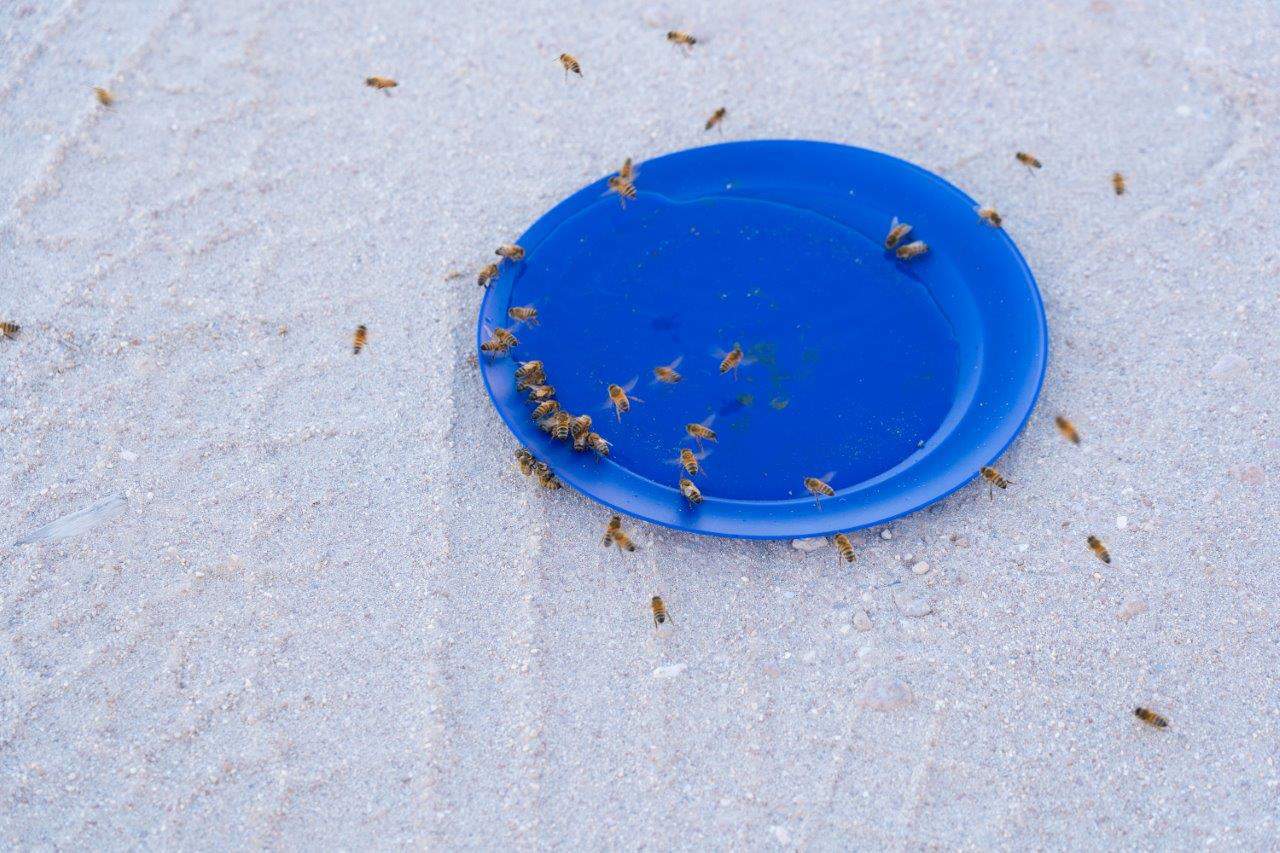 I literally tipped several litres of water out onto the plates as the afternoon went by, and the bee’s and evaporation would have it dry within half an hour each time. They don’t seem to be able to drink out of bowls or buckets without falling in and drowning.

This technique worked in terms of keeping the bee’s mainly away from our camp, which was good as at one stage earlier on I’d gone into the camper to get some clothes and 5 bee’s followed me in!

That evening, my Mum got stung wiping the back of her legs off (which obviously hurt a bee on it) and we discussed leaving a day early, despite it being an absolutely beautiful place. 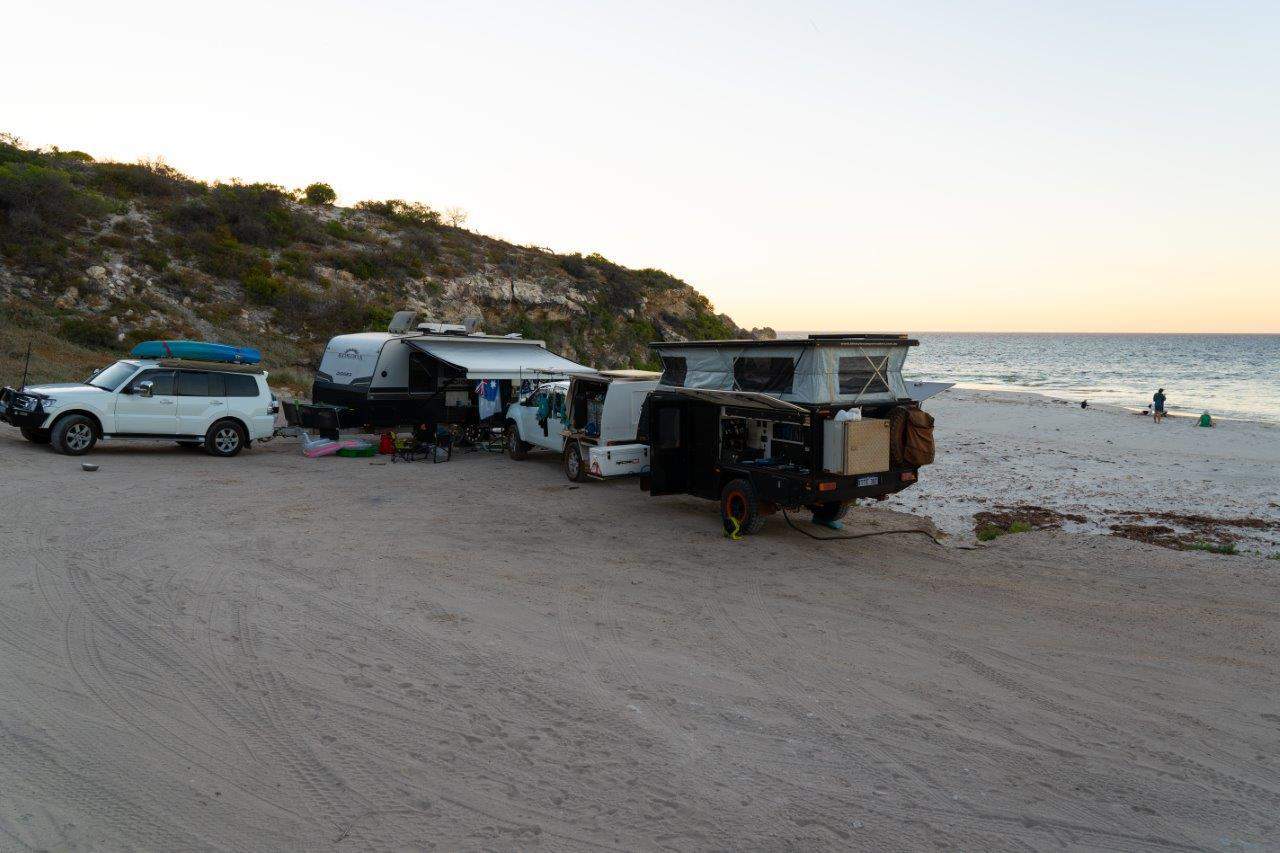 It’s a stunning place, but we had no choice but to leave early

The next morning, the bee’s were much worse, and they were coming in swarms to the water we’d left out. I topped the plates up a number of times whilst we packed up, and we decided to get going sooner than later.

My Dad then got stung when a Bee hopped onto his thong, under his foot resulting it getting squashed. Dad’s quite allergic to Bee’s, and in the past has swollen up at previous sting locations. We got the sting out quickly, and gave him his medication and fortunately there was no real reaction. 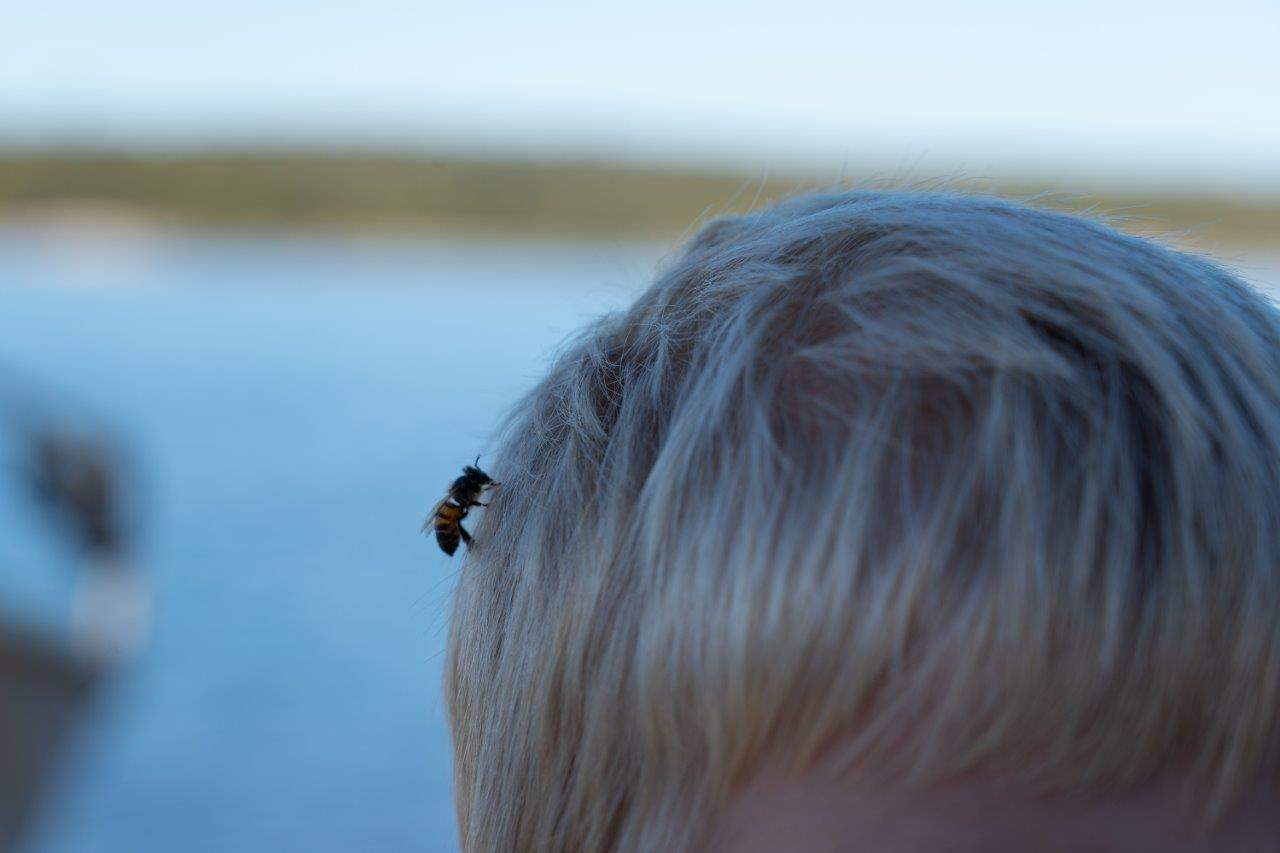 If you are allergic, its not worth the risk. If you aren’t, its still annoying

We pulled into the Dongara foreshore at about 9AM and had breakfast there, at a balmy 39 degrees.

Why are there so many Bee’s?

There’s one reason there are so many Bee’s, and its the high temperature and lack of water. Bee Keepers Reserve is located right near Sandy Cape and there are thousands of Bee’s in there, but they reside in the limestone along the coast too.

I suspect the Bee’s are seriously struggling in the heat, to the point that they try and drink salt water off your clothes. 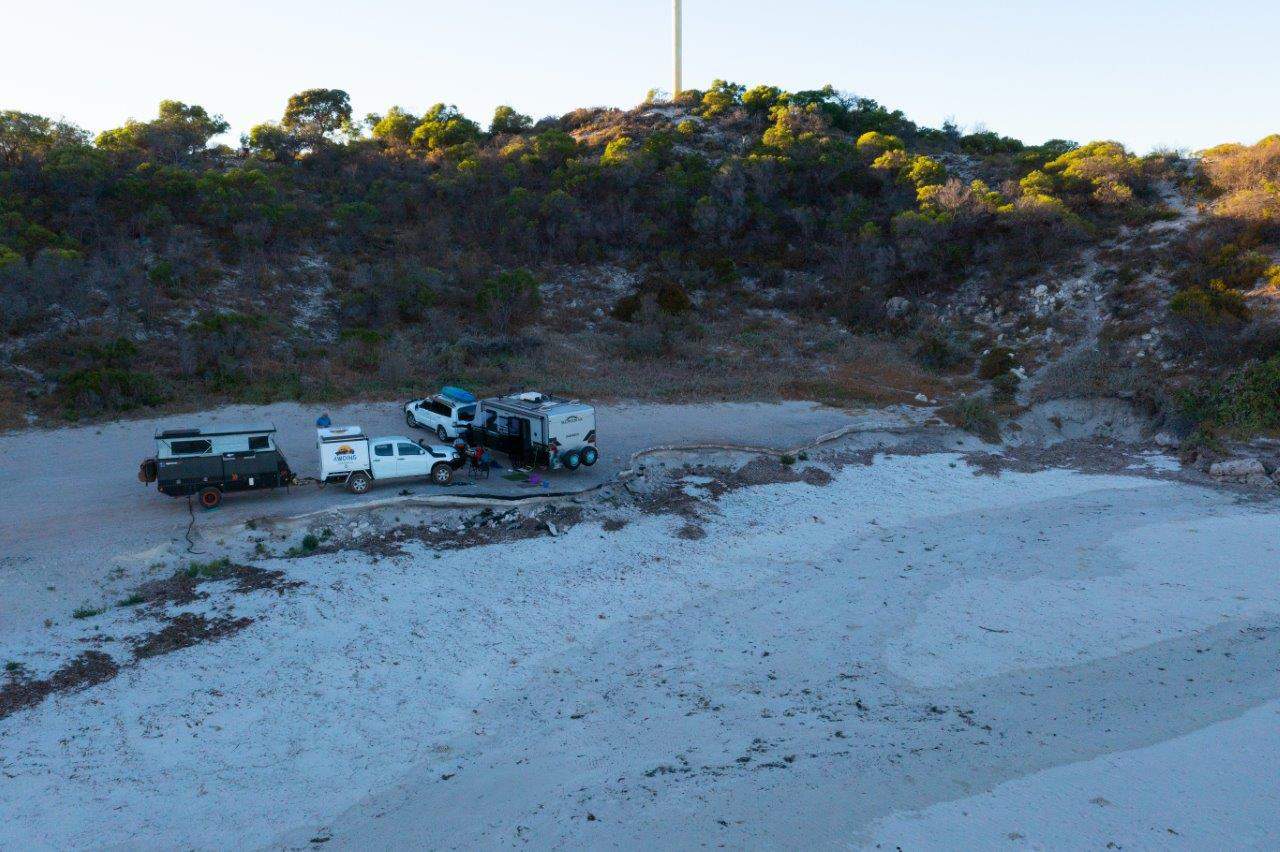 The Bee’s seem to live in the limestone

Are the bees dangerous?

In both cases, the Bee’s were extremely docile and calm. You can literally brush them off with your hands, or blowing on them works best. When on my mobile, they would land on my hand and crawl up my fingers quite happily.

When I was moving the plates of water around, it wasn’t uncommon to have 30 or more land on me, and you could run off at a rate of speed and they’d just fall off without any issues. Their behaviour was more like a fly, but obviously they’ll sting if threatened or hurt, and that’s where the real danger is.

With hundreds around all the time, the chances of you standing on one, or brushing one off a bit roughly was just too high, especially with young kids and two people that were allergic to them.

For anyone with severe allergies though, you’d be mad to even consider stopping here if the bee’s are out. Know that they are not around all the time and you have to check it out for yourself, but in hot weather it is a possibility.

Are they always there?

The Bee’s are not always there, and in fact for 90% of the year you’d hardly see them. However, if its been hot, and is going to be hot on your visit be prepared.

Is there anything else you can do?

Honestly, I don’t think there is. You either stay and put water out away from your camp, or don’t stay. If you were in a caravan and hardly came out you’d be fine, but if you plan on spending any time outside its a problem.

If you live outdoors (tent, camper trailer, hybrid etc) then you probably wouldn’t even get away without putting water down. They need somewhere to go, and even though you probably bring a lot more around, at least they head away from your camp and not onto your food, kitchen and sleeping quarters!