There’s a lot of 12V fridge freezers on the market, and Evakool are one of the brands that have been around for long enough to build a decent reputation.

We are onto our third Evakool Fridge (none have broken), and we paid for them all. This means our review is honest, and has no affiliation with Evakool. This is something we pride ourselves on, unlike a lot of other ‘travelling families’.

EDIT: Oh, the irony. Literally less than 3 weeks after posting this, my grey Evakool died. I haven’t had a chance to drop it to a repair shop, but I will soon and I’ll post the outcome here, and maybe on another post. Our first Evakool failure!

EDIT 2: It’s come good again, and seems to be working, but I don’t have a lot of faith in it now. We actually sold it, and purchased an Upright Fridge instead. 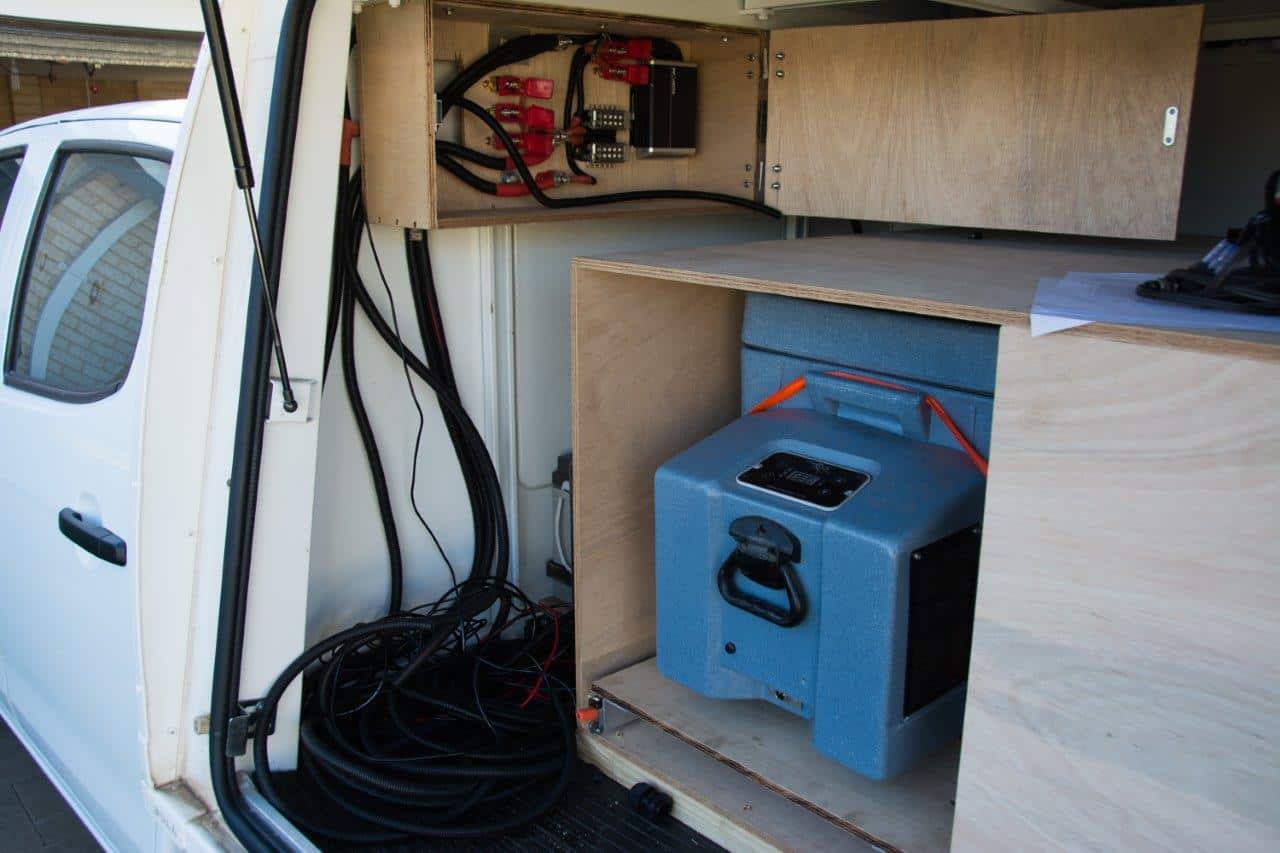 There are so many 12V fridge options on the market today. The most common are Engels, which have a great reputation and have been around for the longest.

They are also very expensive. From there, you move to Waeco (now Dometic), and then Evakool, Snowmaster, National Luna, ARB, Kickass, Adventure Ridge, Companion, Oztrail, Brass Monkey, Kings and the list goes on and on.

Engel is the only fridge that uses a Sawafuji swing motor compressor, and most other fridges run either a Danfoss Compressor, or a ‘copy’. 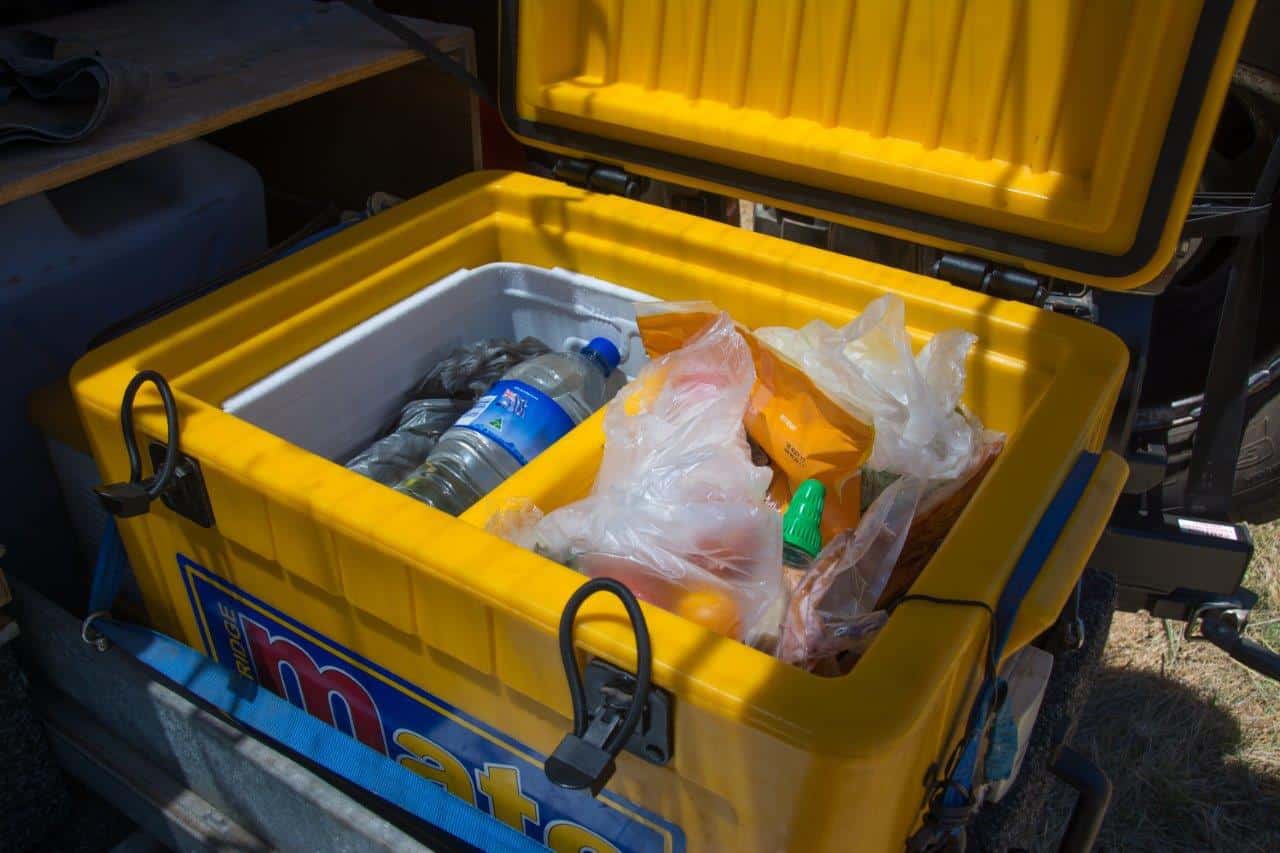 As long as it stays cold, doesn’t use much power and is reliable you are onto a winner

For us, we often try and go for a product that is middle range; not the premium brand names but also not the cheapest brands that are available.

Our first Evakool Fridge was a FM55, and this was the original yellow ice box, with a compressor bolted on the side. These had fantastic reviews, and we managed to get a ‘seconds’ one at a significant discount ($800 from memory).

With a genuine Danfoss compressor, stacks of insulation and a compressor mounted out of the way, how could you go wrong?! 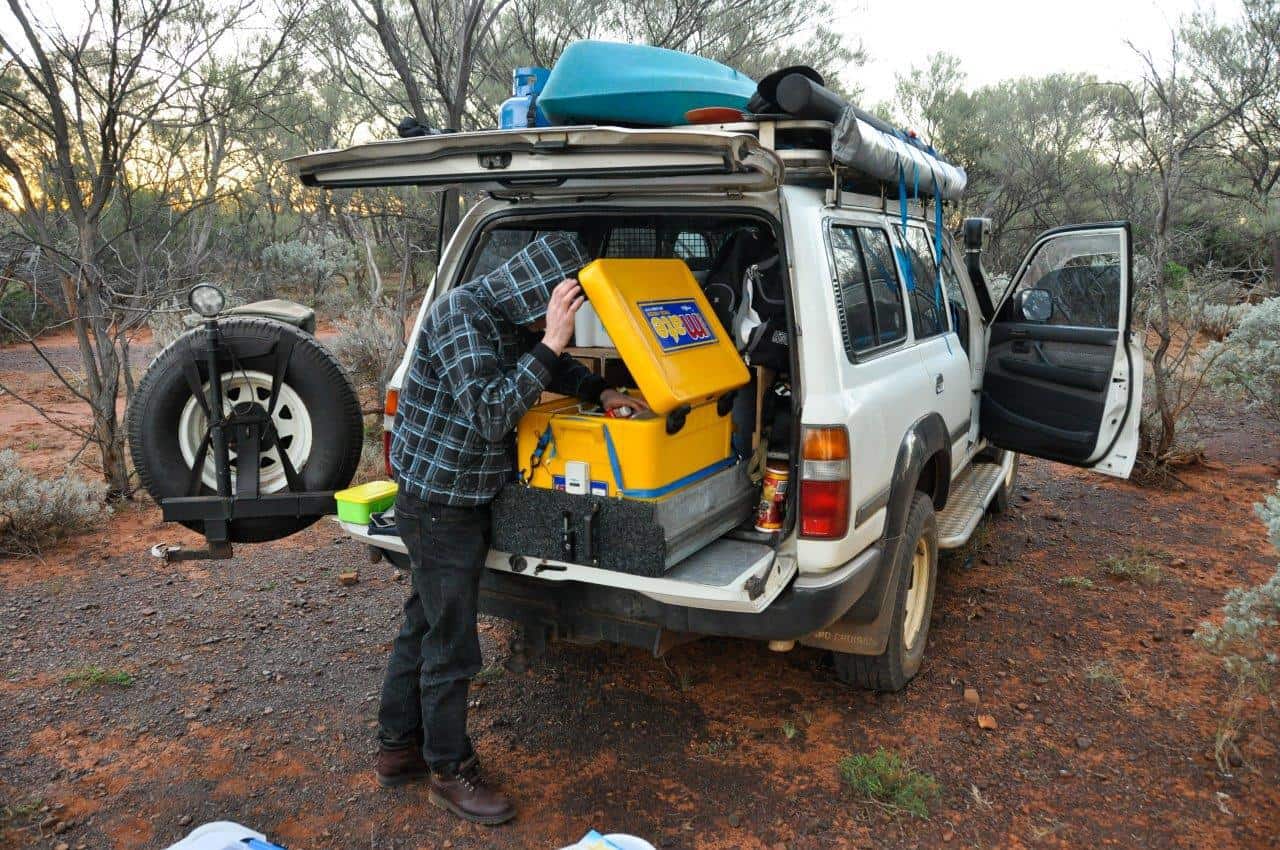 Our original Evakool FM55; a big, ugly, yellow box that was very reliable.

We used this unit as a fridge, or a fridge freezer, and then a freezer only for about 5 years. It was in our 80 Series Land Cruiser, and then inside our Soft Floor Camper Trailer for a couple of years too.

It was fantastic, with the only let down being it didn’t have digital controls, and that the adjustment was related to compressor cycles and not temperature. This meant you had to turn it down overnight or you’d end up with things getting too cold as the ambient temperature dropped and the fridge cooled better.

This unit was sold with our soft floor camper trailer as we didn’t need it, and I wanted to move the trailer on (it was a bit of a deal sweetener!).

We eventually upgraded to the GMF55, which was almost identical to the yellow unit, with exception of a copy of the Danfoss Compressor, and digital controls.

This was put in the back of our Land Cruiser and has been set and forget in terms of temperature. This was also a ‘seconds’ buy, and we’ve had this unit for about 5 years too, with no issues. It now lives in our Dmax full time, and gets used as necessary. 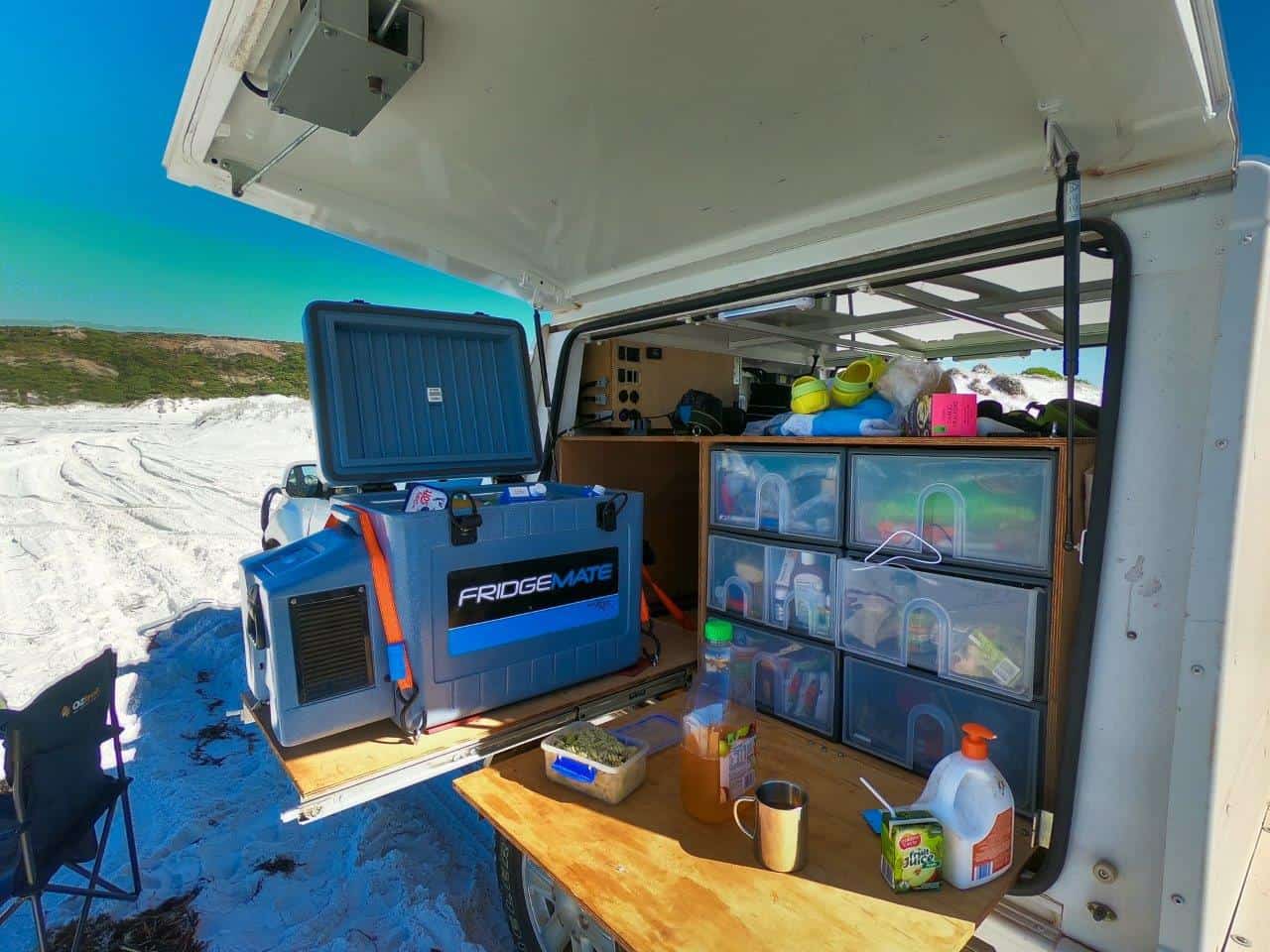 Our current Evakool Fridge Freezer in the Dmax

The third Evakool that we still own is an 82L fibreglass unit, that came with our Reconn R2 Hypercamper. This is also a fridge freezer, but is split about 2/3 of the way. We’ve used this now for over a year (and its 2 years old) with no issues. 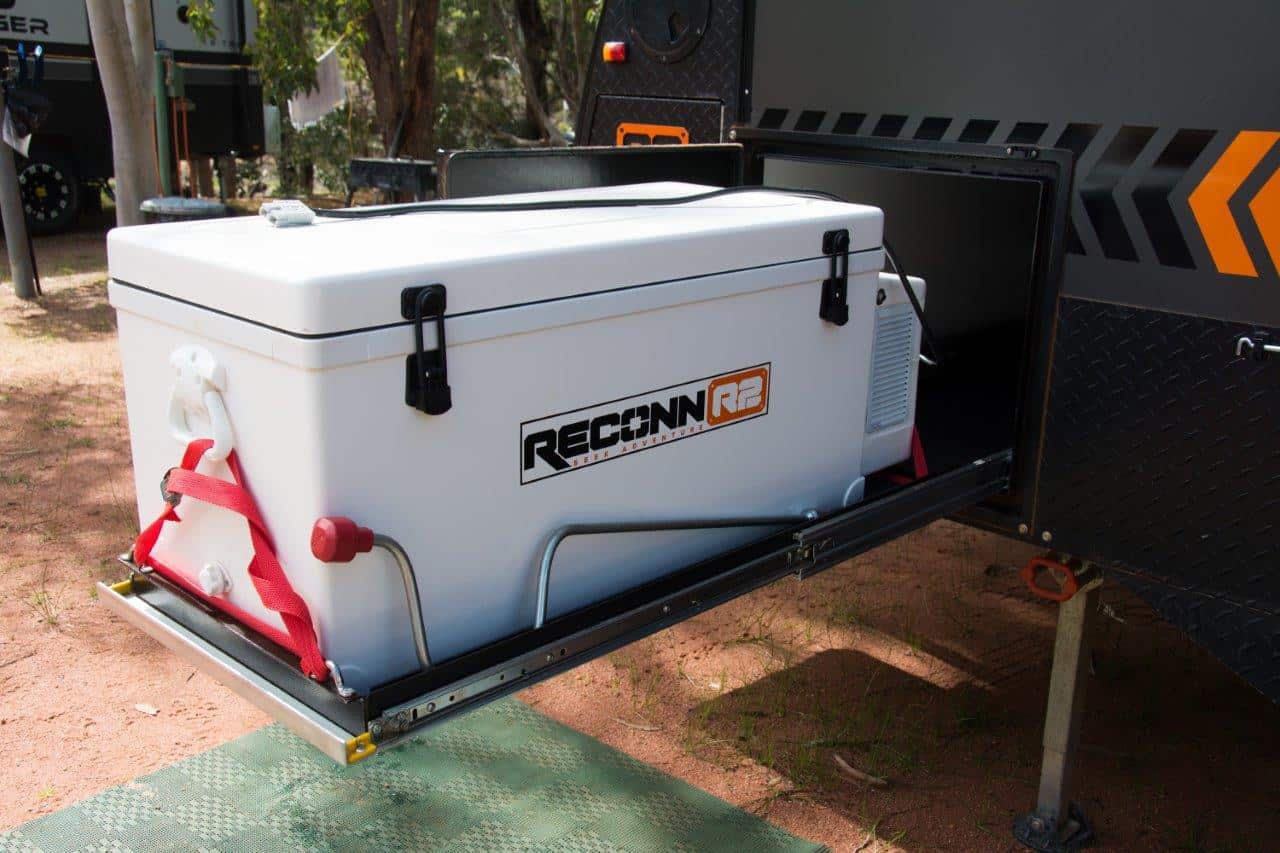 The Reconn R2 came with an 82L Evakool Fridge Freezer

I have a number of friends and family that also run the Evakool Fridges and have had no issues. They are a great product, and I have no need to change any of ours out.

The only issues I’ve seen with the Evakool Fridges relate to the rubbish cigarette plug that they come with. Our original yellow one used to come loose on corrugations, and you’d arrive at camp to find the fridge had been off for half of the day.

My brother also has a GFM55 Fridgemate and used to often get all sorts of random errors coming up, which really meant very little. We cut the cigarette plug off, and hard wired it, and its been flawless ever since.

If you have a fridge running on a cigarette plug, cut it off and fit an Anderson or merit plug. They have far less issues with coming loose, voltage drop and in general just failing at the most inconvenient time. 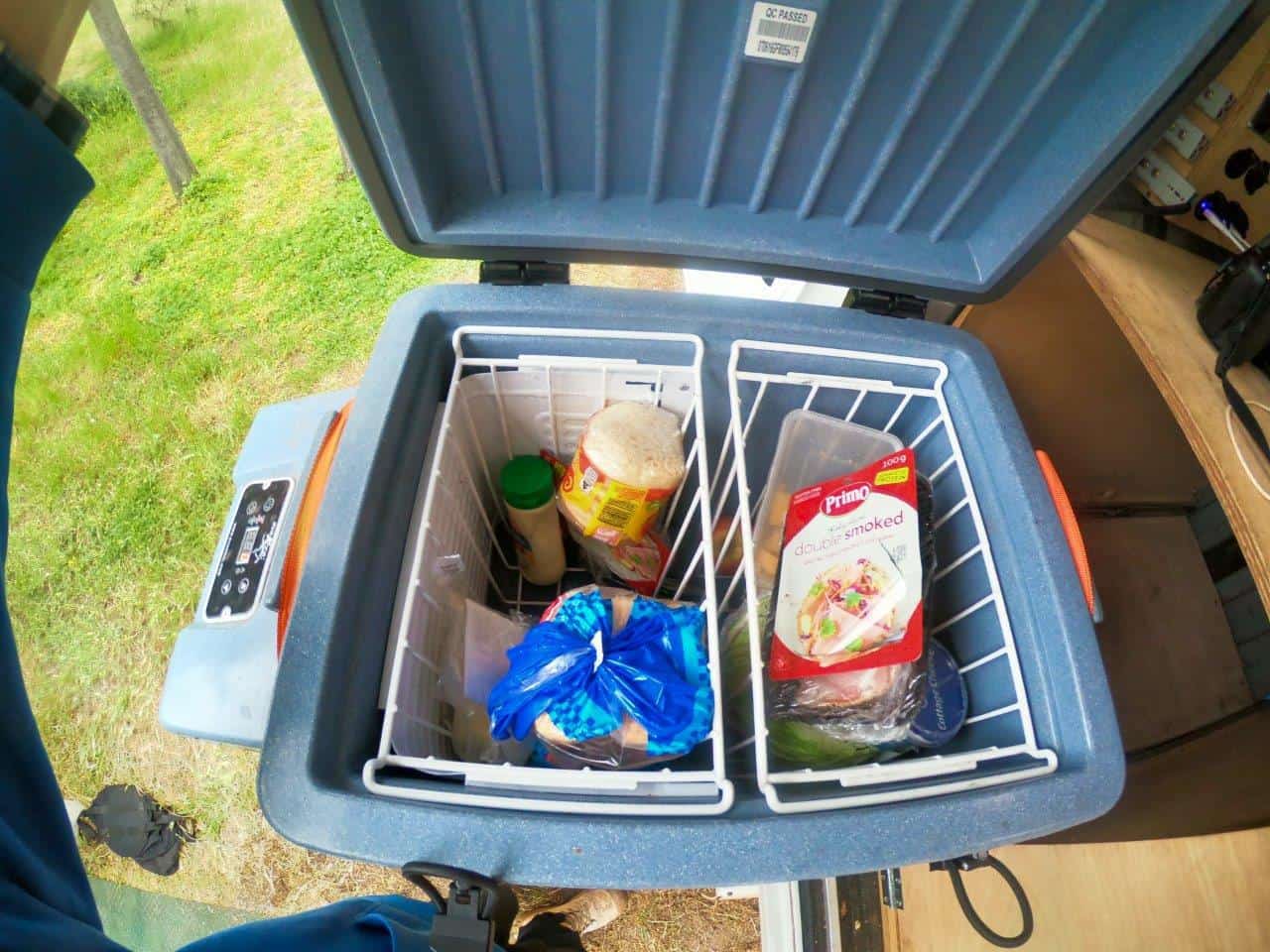 Our GFM55 has been fantastic, with an Anderson plug on instead

You’ll notice that Evakool Fridges have their compressor compartment separate to the fridge, almost like its been attached to the side. This is smart, as it keeps the warm compressor away from the fridge. They use rubber cords to hold the lid down, and have a range of modes that you can run them on.

They also have a significant amount of insulation compared to many other fridges, which means they are more efficient. Evakool used to say that if your fridge needs a cover, its not very well insulated!

All of the fridges come with baskets, that you can use, or leave out. We always use the basket around the white condenser as these are somewhat fragile and you don’t want jars and heavy food banging against it when off road.

Occasionally if we need extra room we won’t use the basket on the other side, but they are good for keeping your food fresh, evenly cooled and out of the water that inevitably ends up at the bottom of your fridge after a week on the road!

Two of our three Evakools came from seconds sales. Evakool has regular sales where they list all of their products that are seconds. Now, initially this was a rare occasion, and the yellow fridge was well made, with no way of telling it was actually a factory second.

Unfortunately, I cant say the same for the blue one that we bought. There’s nothing majorly wrong with it, but it came with a screw cover missing, the seal doesn’t work brilliantly, the lid is warped a bit and it just feels a bit flimsy.

I don’t know how the seconds work, but I wonder if the quality control is a bit hit and miss and anything that doesn’t pass just gets sold as a factory second. If you wanted a cheaper option, keep an eye out for the Evakool Factory Seconds.

One of the most important factors when buying a 12V fridge is its power draw. If you get something that sucks power like a V8 and petrol, you’ll need a heft 12V system to prop it up, and that’s not much fun.

I’ve monitored the power consumption of all of our Evakool’s, and they are fairly efficient in the grand scheme of things.

Obviously if you run them as a freezer, they will cycle more, and use a lot more power.

Overall, no real complaints with the Evakool products. They’ve worked well for us, and many others. I’d happily get another, but I don’t think we will need to any time soon.

What fridge do you run? Are you happy with it?