We’ve had our Reconn R2 pop top hybrid camper trailer for a number of years now, and have just gone about replacing the gas struts that hold the roof up. It was an entertaining job, and today, I want to share some tips with you to make it easier. 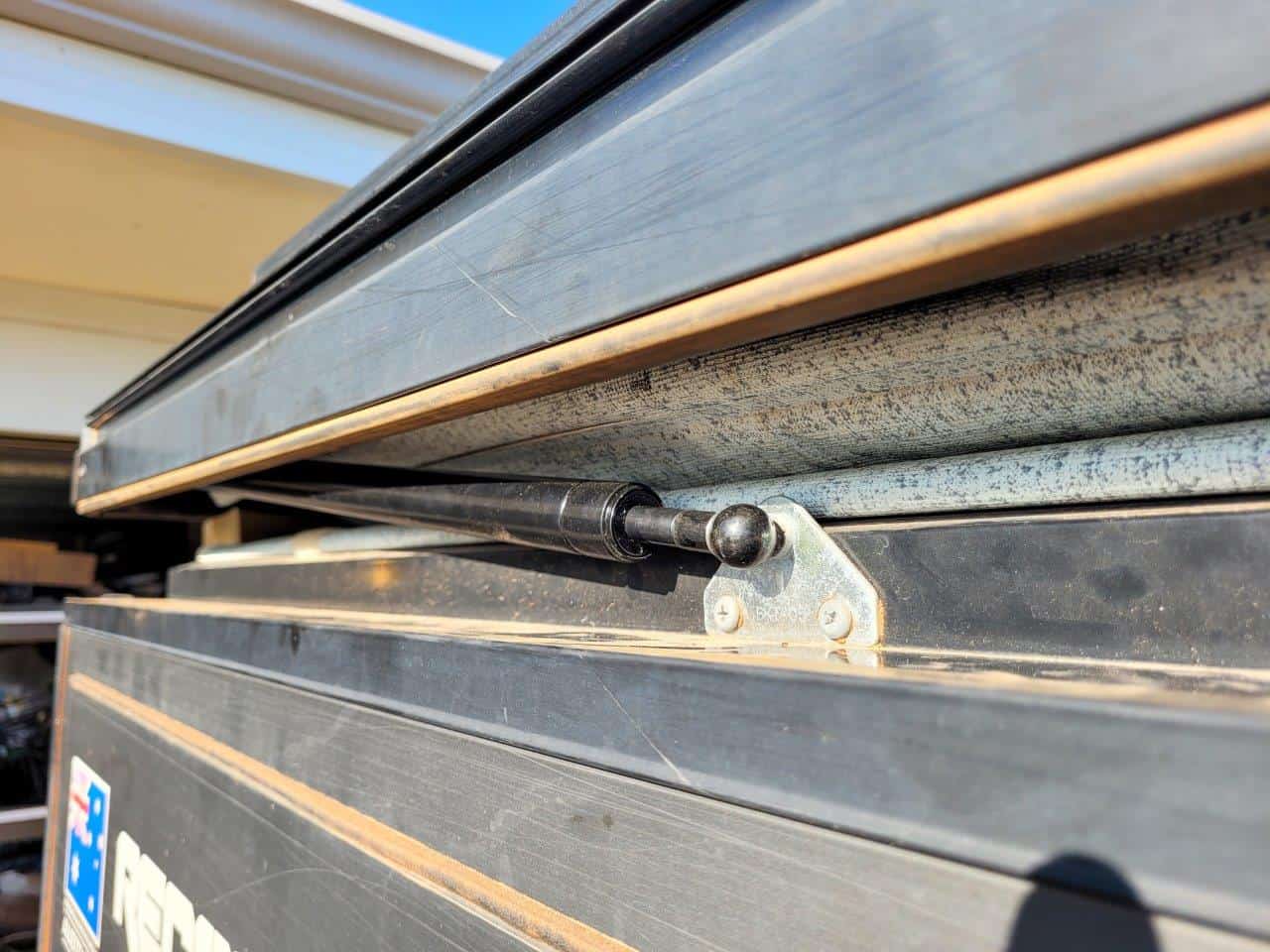 Why did we replace the gas struts?

Our gas struts were due to be replaced, purely from a wear and tear perspective, but we also did a significant solar panel upgrade which meant a lot more weight had to be lifted, and that forced our hand.

In the last 12 months, I’d noticed the roof start to sag a lot more in our pop top, with the sock not going up nice and taught, like it used to. I could tell it was sagging as the roof would touch my head, and it never did when we got it. 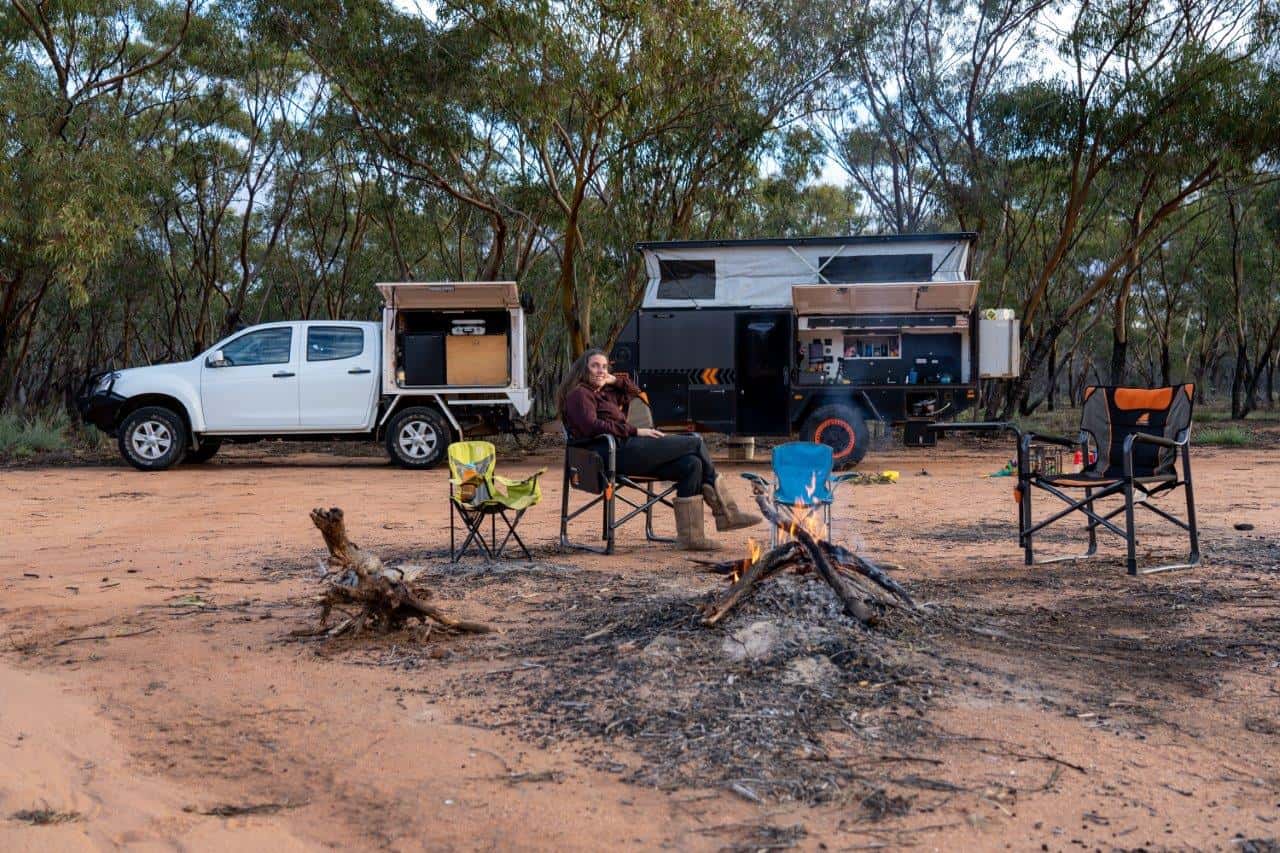 The front was starting to sag

Out of curiosity, before we changed anything, I tried to lift the roof with the new panels just sitting on top, and could hardly get it up half way, and I like my back working properly. 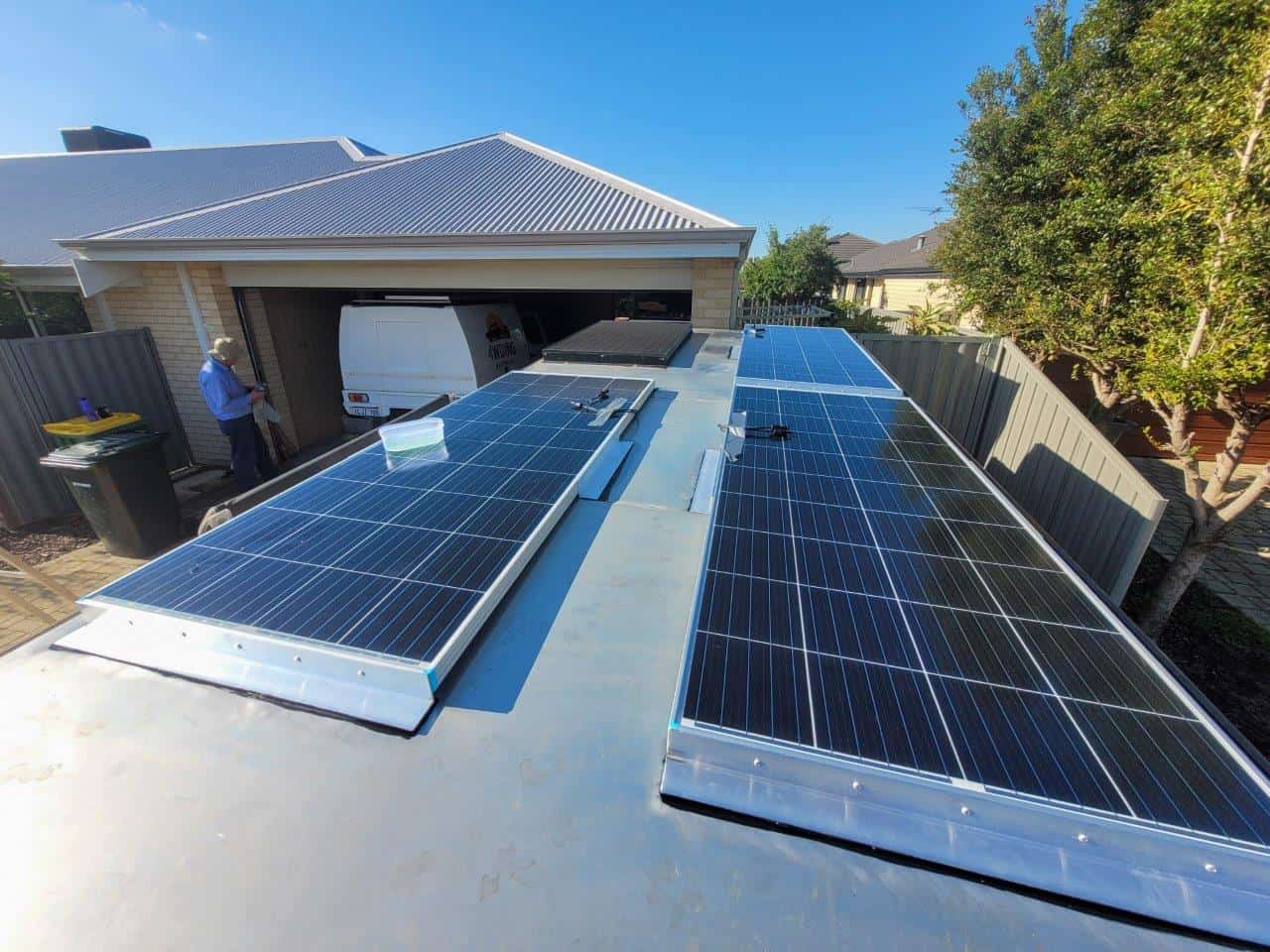 What information do you need for replacing gas struts?

When your gas strut is fully extended, get the centre to centre measurement from the two connection points. Alternatively, you might find that the gas strut has a measurement stamped or printed on it. Ours was 1035mm, and the new ones supplied were 1030mm. I guess there are standard sizes, and the 5mm difference wasn’t going to make a difference. 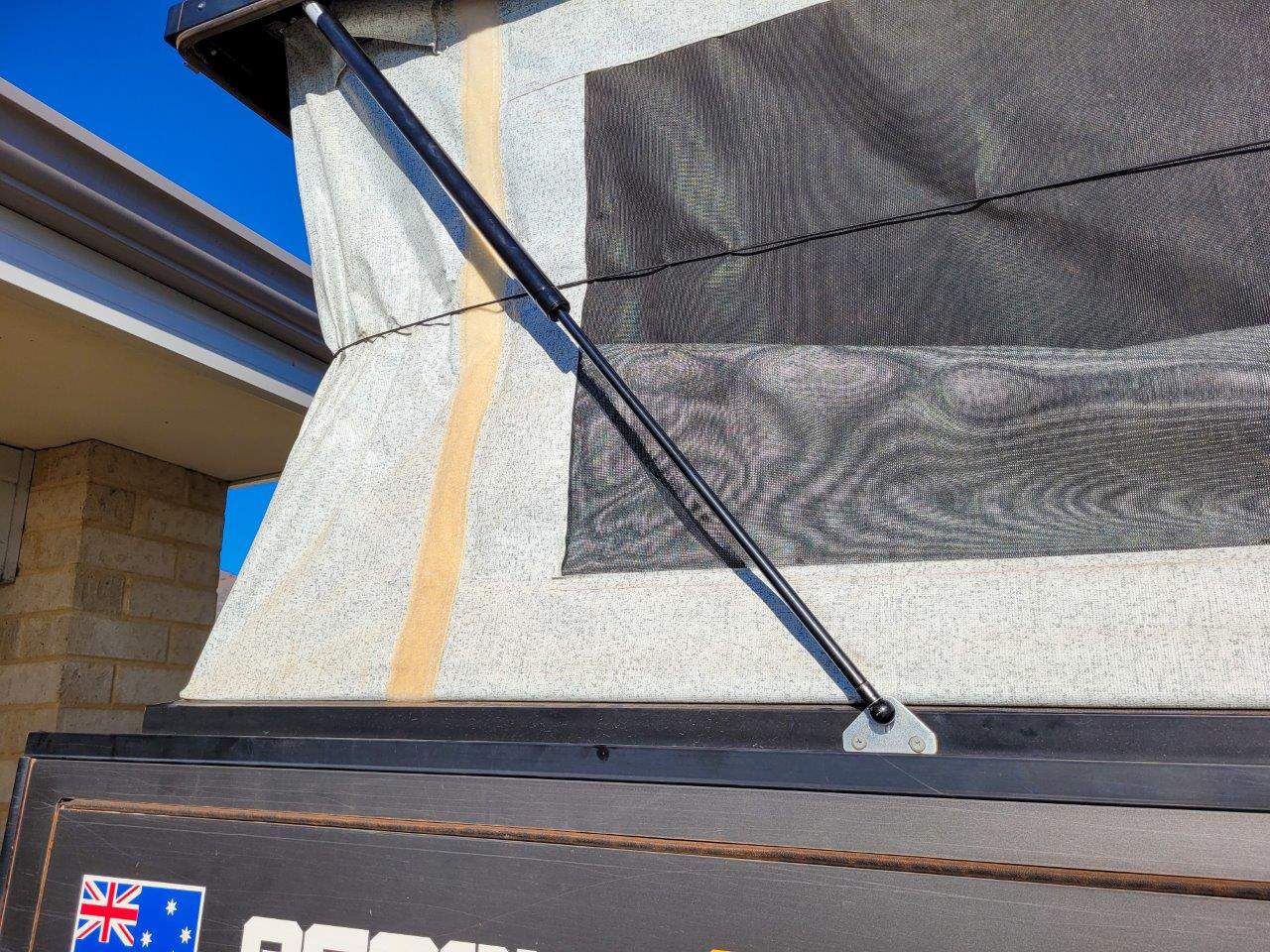 How does the gas strut connect to your setup? There’s a variety of different connections, and as we discovered, some run different ball sizes, and they might not be locally kept. Originally we’d planned on getting new struts prior to putting the solar panels on, but they weren’t ready due to having a different size ball connector.

If you aren’t sure, the best thing to do is take your gas struts in to be looked over, or take photos of the connectors with a ruler next to them so the supplier can get the right parts for you. 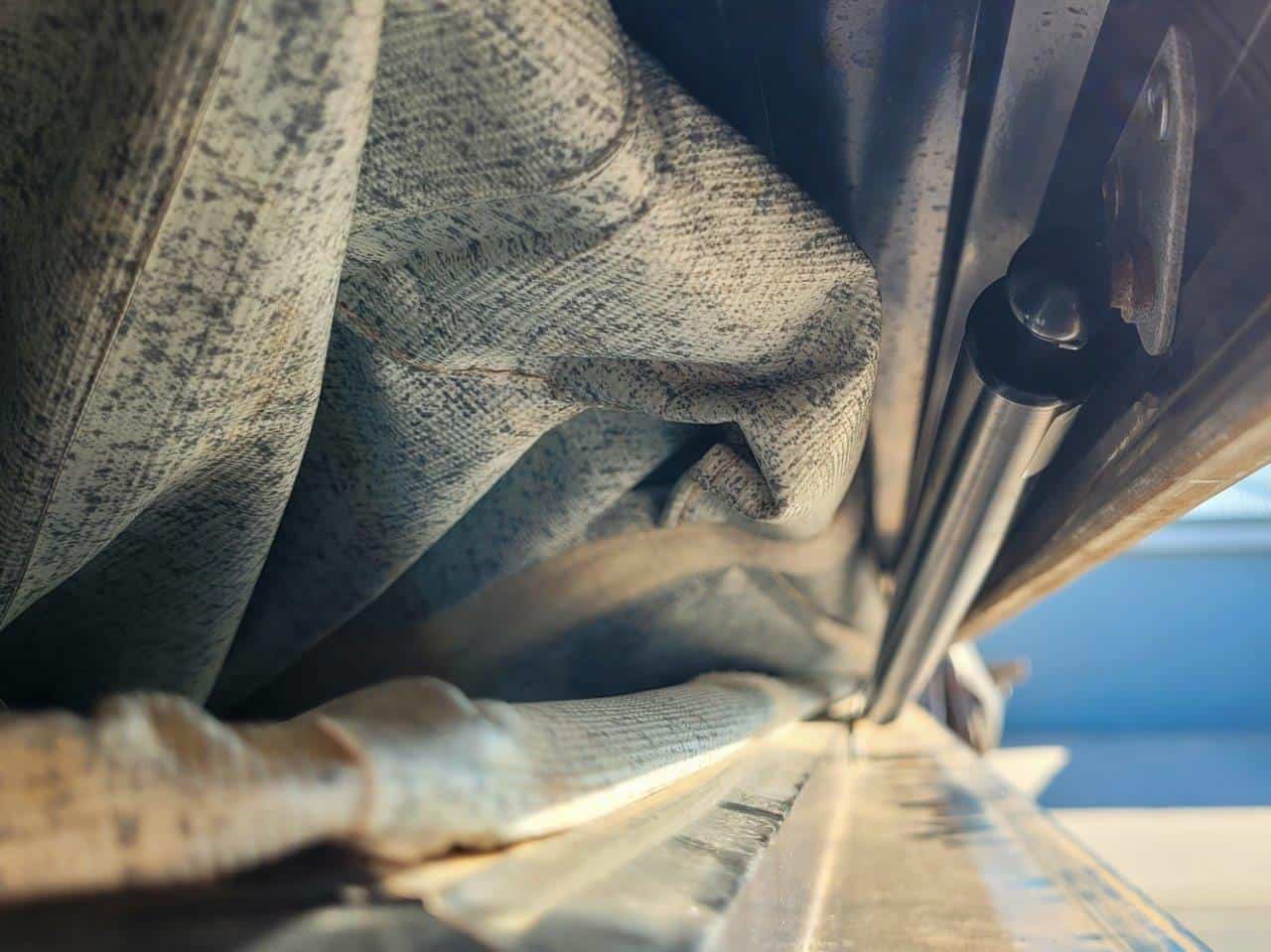 How does the gas strut attach?

The final piece of the puzzle is the gas strut pressure. Again, hopefully this is written, or stamped on the unit. If it says 100N, that’s the factory gas pressure and it will have been topped up from that. You can get the force measured, but bear in mind that it will have likely lost pressure over time.

The gas strut pressure is measured in Newton, and roughly translates to 10x less in kg. For example, a 180N strut (which was what was labelled on ours) applies around 18kg of force.

In our scenario, we were adding around 42kg of weight to the roof of the camper, and we were recommended to give 250N a try. An important point to note is that you can’t remove pressure from these; you can only add it, so start lower if you need, and bump them up as required.

I want to make it very clear that the 180N ones we removed could be easily compressed, and the 250N ones we put back in I struggled to compress vertically with both arms and my body weight against it.

Where did we get our gas struts from?

Struts West supplied the new gas struts, and if it weren’t for the different ball size, he’d have had them in stock and only needed an hour or so to gas them up to our desired pressure.

Prior to this, I’d had very limited experience with gas struts. Most of them are incredibly easy to remove, as long as you can take the pressure off, and I was happy to see ours were no different. Ours just have a small clip that you flick around and pull out, which stops the ball from coming off the connector. You can do this with a small flat blade screwdriver, or even your fingers.

Once the clip is off, you just pop the strut off. However, before you proceed have a good think about what the strut, and what its connected to is going to do. Is it going to continue coming out and damage something? Is the roof going to collapse and squash your arm, or another body part? Please be respectful with these; it wouldn’t be the first time people have been badly hurt playing with gas struts. 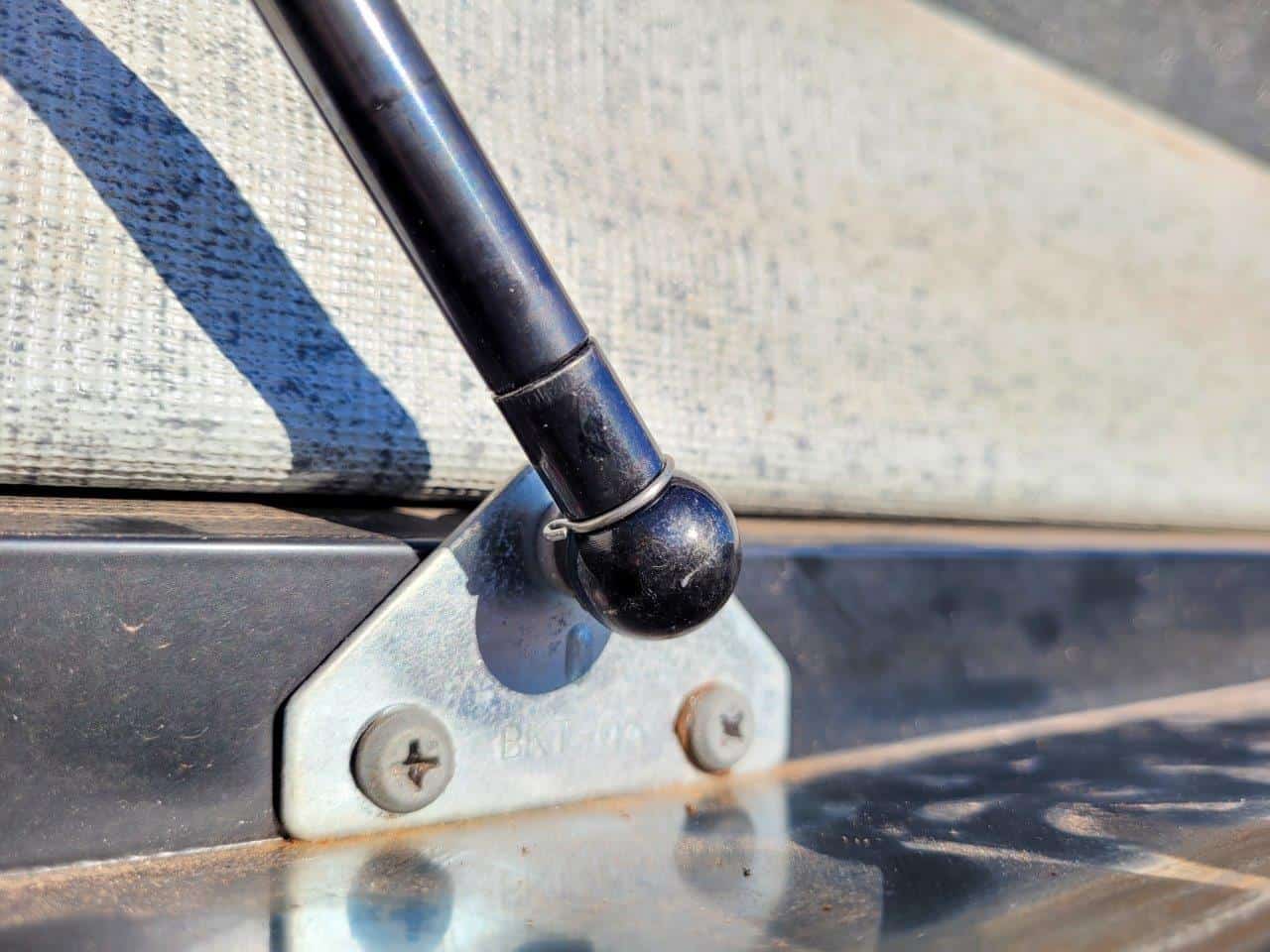 Simply flick the wire clip around and pull it out

How to replace the gas struts

Now, I’m going to tell you what not to do here, and hopefully you’ll have an easier time than what we did. My initial intention was to replace the gas struts first, in the up position, pull the roof down and install the solar panels, and go from there.

However, when I found out that the gas struts wouldn’t be ready for another week due to needing parts being ordered in, I had to make a call. Do we fit the panels as planned, when the weather is good, and the roof is down, and then try and lift it enough to change the struts?

I knew it was a risk, but with bad weather around, some help already arranged to do the panels and a limited deadline before our lap of Australia, I had to do it.

The solar panel installation went really well, and a week later the new struts came in, and I was keen to see how easy they’d be to install. I started off by undoing the latches, and lifting each corner up about 40mm, and putting a block of wood in place. I went around twice, and lifted the whole roof up about 100mm on blocks of wood, and that’s how we did the swap. 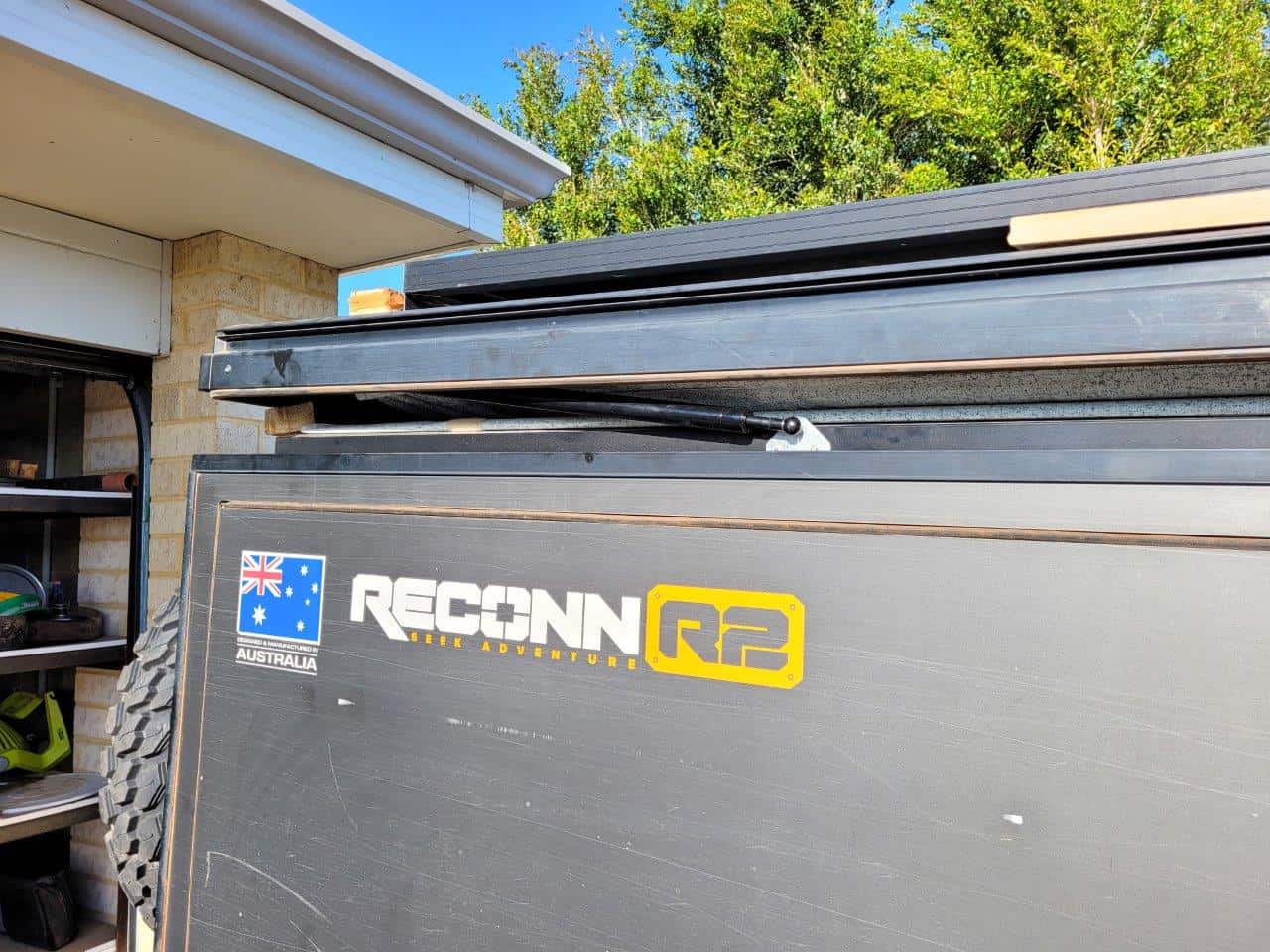 With each corner propped up there was just enough room

It was awkward as, because you couldn’t see the ball joints that well, the struts had to be almost entirely compressed and there was limited room for your hand to go inside to install the locking clips. We struggled to get the clips undone and back on, and had the usual battle with compressing the gas struts.

Our new struts were 250N, or roughly 25kg of force, and initially I was considering trying to put one end on a ball joint push the other end in beyond where it needed to go, then swing it up and as it came out hook it in.

Sounds simple in theory right? I can tell you I couldn’t have been further off the mark if I’d tried. I could barely compress the strut with a heap of my weight on it in a vertical position, let alone doing it horizontally, and they come out far too quickly to be able to hook the struts on.

A quick look online and I discovered people were using ratchet straps, which I gave a whirl on my own, but found that by the time they’d compressed in enough I had too much strap wound up and it wouldn’t go any further.

I improvised, and used a pull tight strap, and managed to do the first one on my own by compressing the strut and flicking the strap over. Now, you should know that its important your connectors line up, and you have access to them. Our balls were 180 degrees from each other, and you have to make sure the strap doesn’t cover the hole or you can’t put them on. 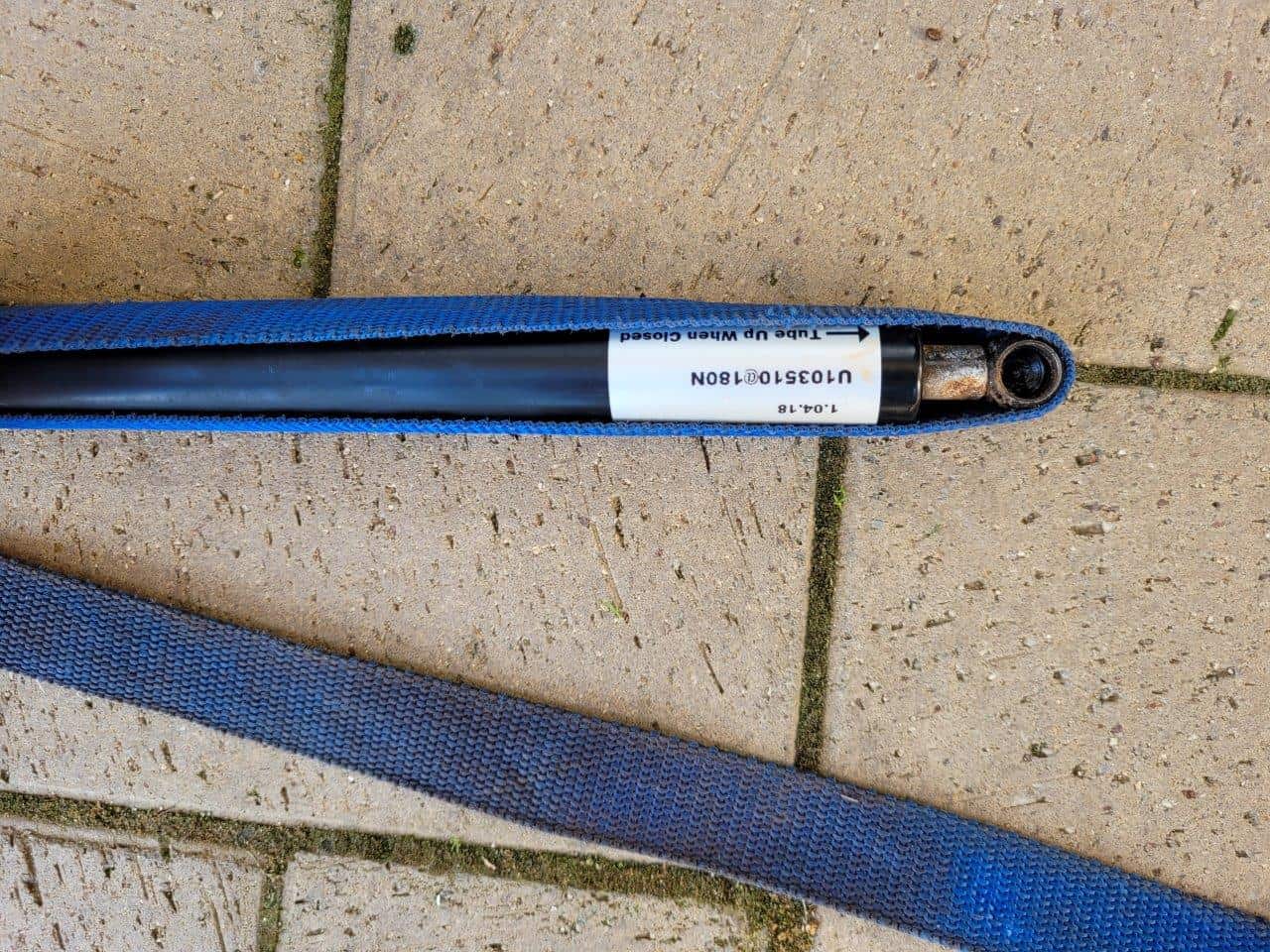 The remaining 3 were done with the help of Sarah, and were much easier. We just compressed it to the right length (checking a number of times), lifted it up, popped it on and then removed the strap, before putting the retaining clips in.

I’d do this in the upwards position, with two people, and I’d have a block of wood under the corner that you remove, so it can’t sag, bend the roof or fall on you.

Get a decent quality pull tight strap that you can adjust easily, and take your time. Removing the struts is easy enough once you’ve got the retaining clip out, but just be prepared for the strut to move once you undo it. 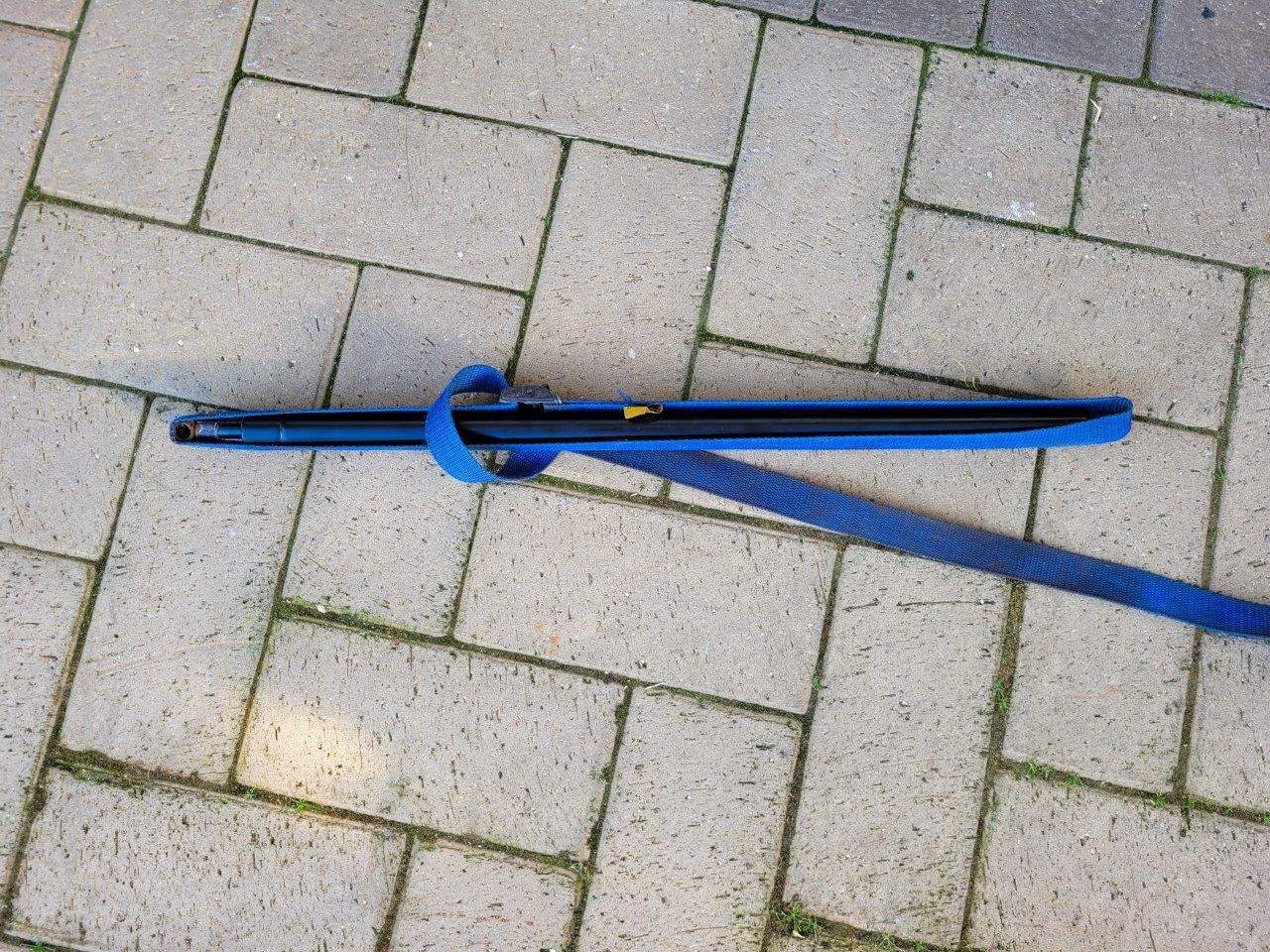 There’s no way of doing this without a strut

Make sure you get the clips in squarely; its possible to get it through the first hole and miss the second, which means they get bent and don’t retain the gas strut properly. In our case, when you have nothing else supporting the roof it could be bad pretty quickly!