Whilst enjoying a small fishing session late in the afternoon on a stunning beach at Point Brown, I hear Sarah yell out from the top of the cliffs. I turn around to see a bloke standing next to her, and she waves me up the sand dune and back to camp. I wondered what old mate might have wanted, given we were in a fairly remote part of the world, and perhaps if he was unhappy about the camping spot that we had chosen.

As it turns out, he was after some assistance with a badly bogged vehicle on the next beach along, and I happily accepted to follow him out and render some assistance. As I crested the final hill, I see a reasonably new Toyota Hilux bogged about as badly as you could be on the beach, roughly a hundred metres away from where you enter, but thankfully a while away from the incoming tide!

What took place was a huge reminder of the importance of picking the right tyre pressure for beach driving, and then I was reminded again a day later when I too got very bogged. Now, I will say I didn’t take any photos of the bogged Hilux because I was busy helping, and also because I felt bad for the young bloke, but we have plenty of our bogged Isuzu Dmax from the next day!

I hop out of the Dmax, and assess whether its worth airing right down to get onto the beach and pull him out, and decide to give the Maxtrax a whirl instead. I walk down, and can see the Hilux well and truly sitting on the chassis, and wonder if the tracks will work, or he’d need a pull out. We shovelled a bit of sand away, and rammed a Maxtrax under each wheel, and I instruct the driver to just gently try and climb them. The first attempt fails, with the rear right and front left tyre spinning, and that’s it.

We dig some more sand out, and push the Maxtrax under the wheels firmly, and this time they bite and he pops out in a matter of seconds. With no tyre gauge and just guessing the tyre pressures from the tyre bulge, he heads towards the beach exit, which is a steep one with a small corner. With a bit of right foot he makes it about half way, but still not far enough without a fairly substantial snatch, and I didn’t want to muck around with the winch.

I was fairly confident he would make it up with the right tyre pressures, so ran back to my vehicle to grab the ARB deflator. I check the pressures, and see some of them still at 25 PSI, which is way too high. I decide 12 PSI would be the perfect pressure for a lightly loaded Hilux going in a straight line up a hill, and drop the tyres right down.

I then ask the driver to back down as far as he can to the rocks, and to give it a bootful in second low, which he does. Initially he only just makes it to where he stopped last time, but then it lurches forward and climbs out all the way under its own steam, with no issues at all.

I turned around and chuckled at the looks of those nearby, who couldn’t believe he’d made it out without any other vehicle assistance. It’s all about the tyre pressure for beach driving, and in so many cases if you stop when your wheels start to spin and you bog down, it can make a recovery 10 times easier.

I was reminded of this the very next day, when we headed to Perlubie Beach, and I pulled on with all 6 tyres at full highway pressures. I could see a number of vans down further, and decided we wanted to go a bit further down away from the bulk of the crowds and seaweed.

I could feel it getting a bit softer as we chugged along, but it still felt firm enough that we’d have no issues. However, when I finally found a place to pull up, I swung the Dmax around and just as I was straightening back out, it sunk like a rock and I knew we were going to be in for some fun. 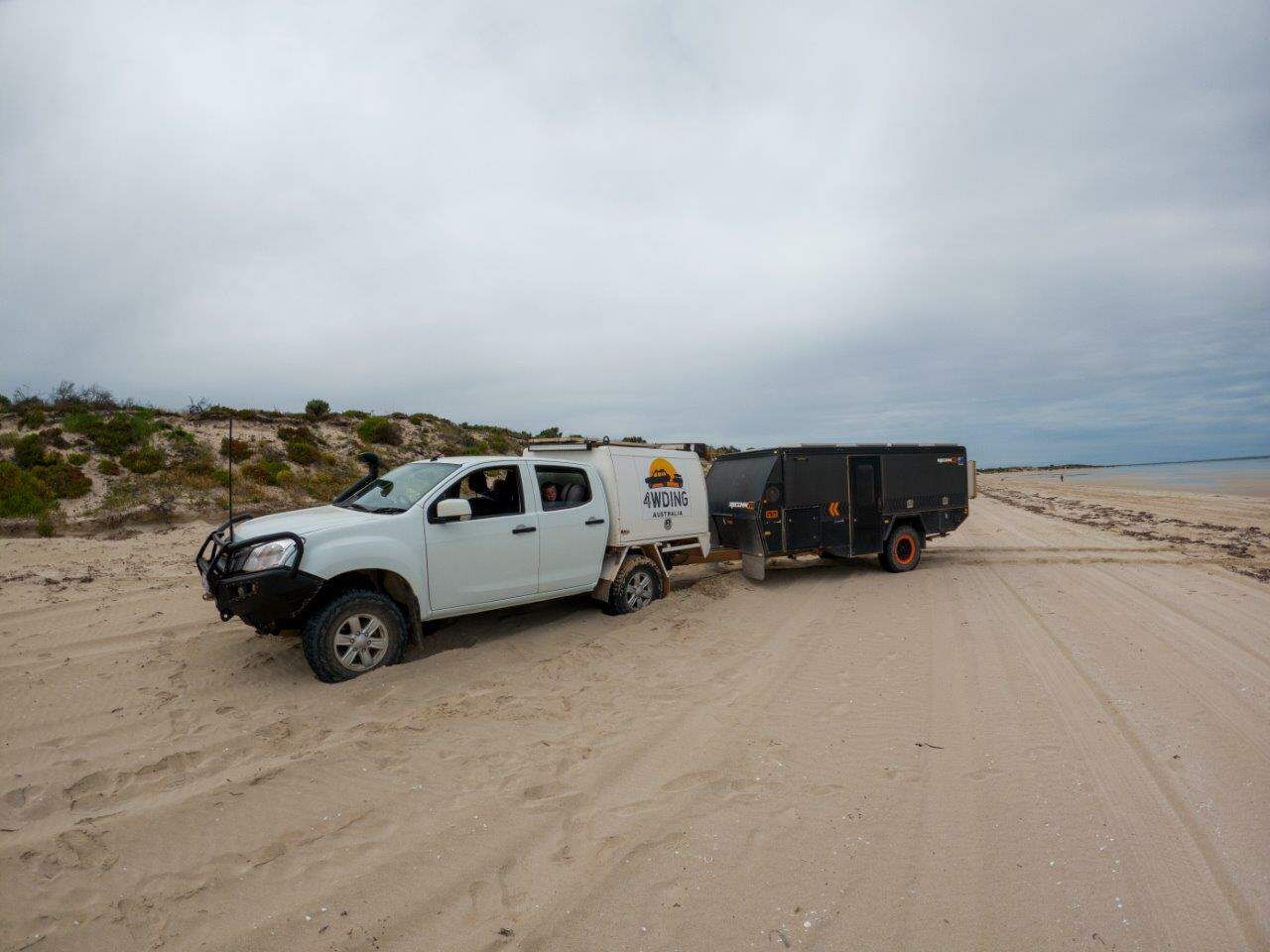 The result of running the wrong tyre pressures for beach driving, but this was just the beginning

I dropped the tyres down to 20 PSI, but left the camper ones, and proceeded to use the Maxtrax to go backwards and forwards. 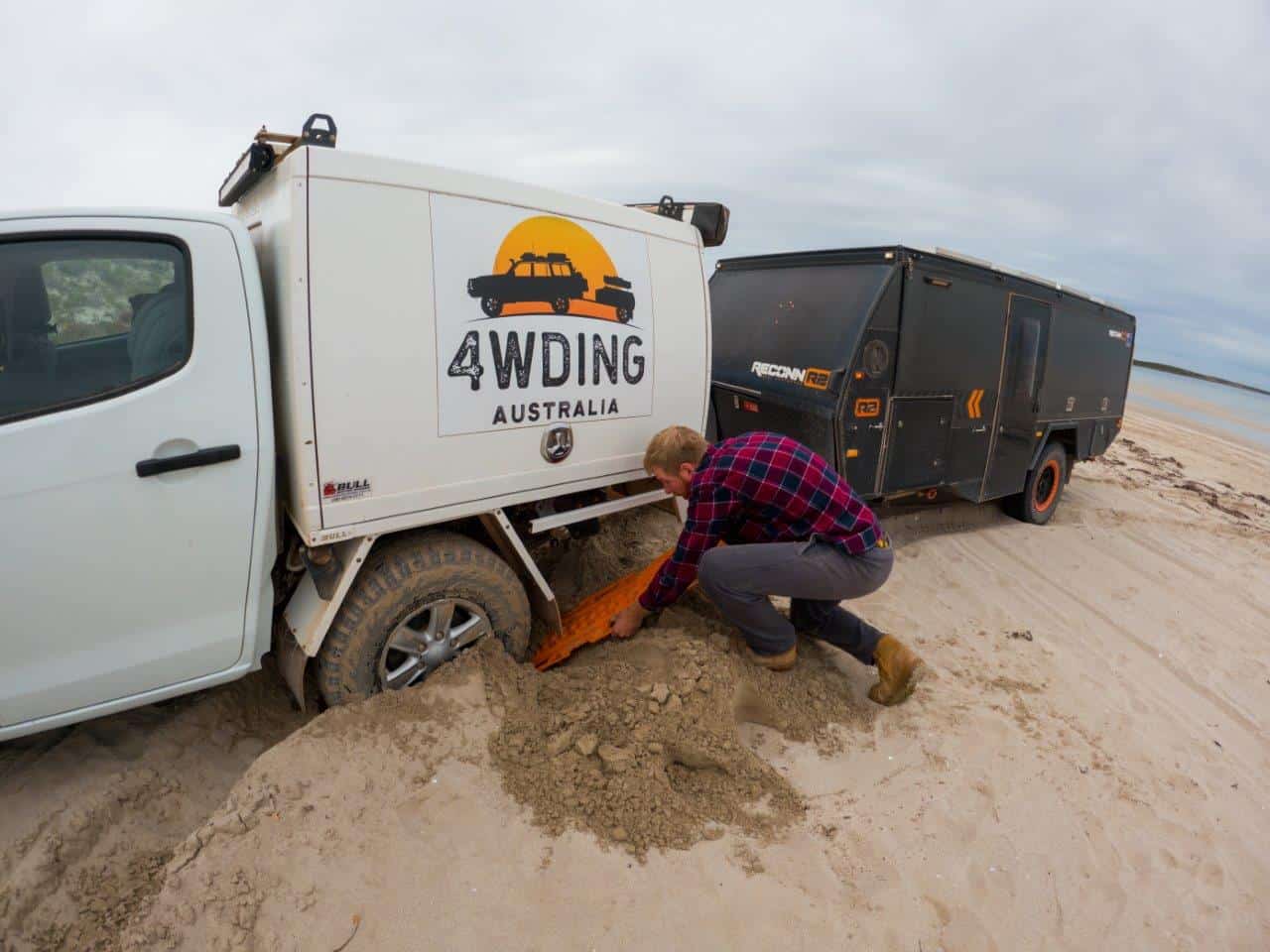 The more I tried, the worse it got 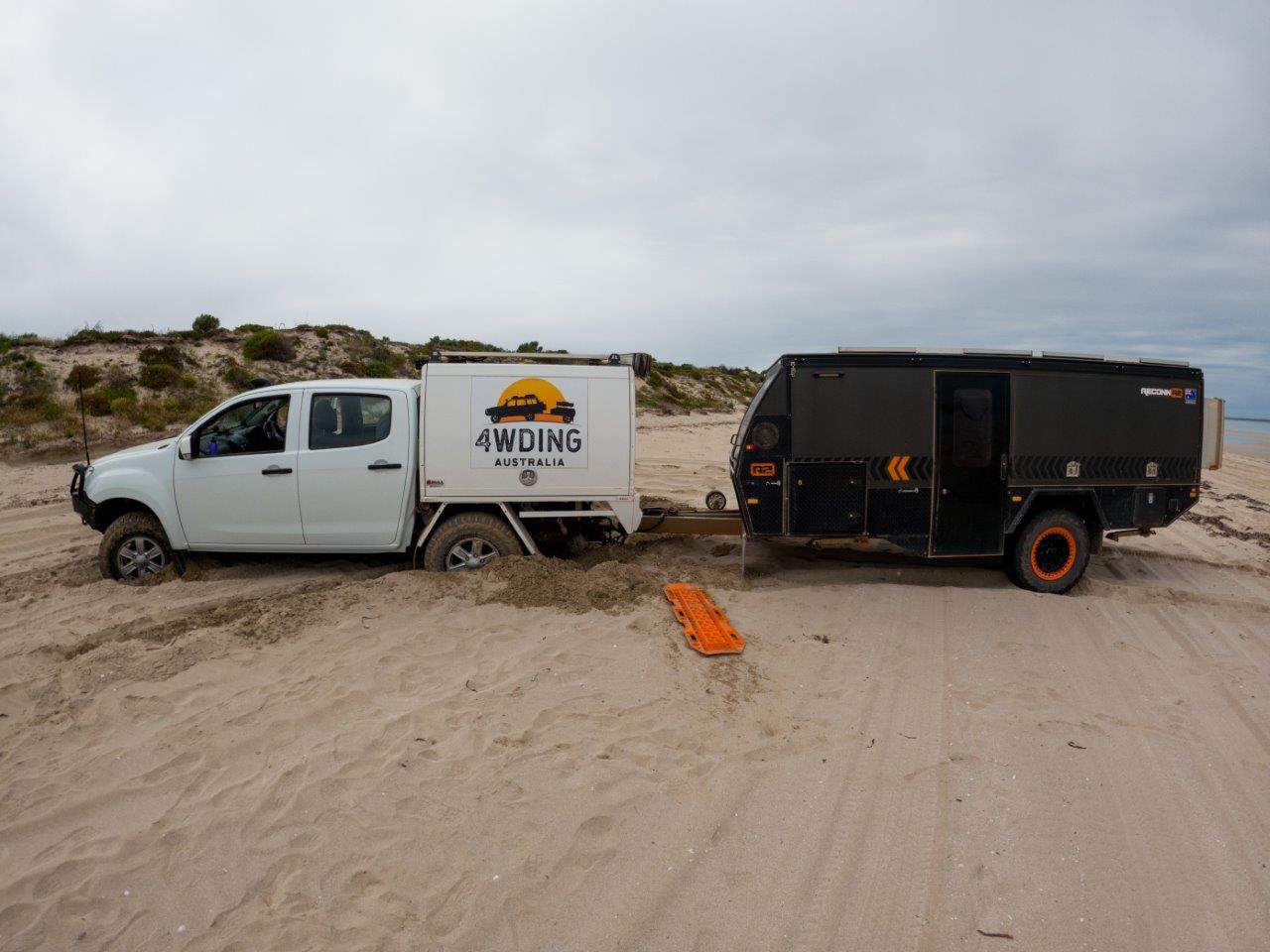 In between a rock and a hard place

Every time though, the camper would jack-knife a bit more, and there was no way I could get the Dmax to point down the small incline, which was making it all too hard. 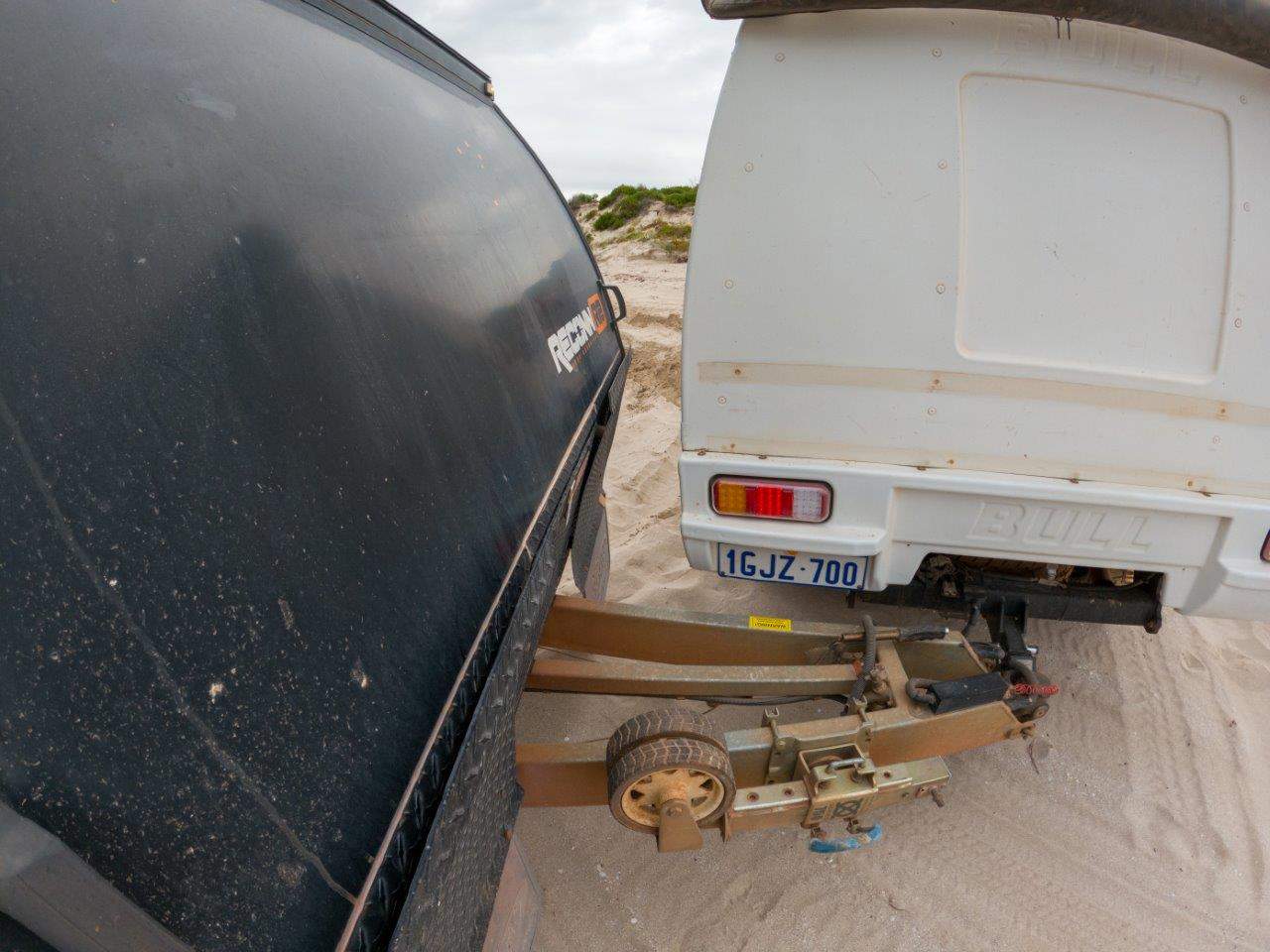 Every time I reversed back it would jack knife even more, and it wouldn’t drive forward up the slope

Eventually it came out, and I managed to reverse to harder sand, and attempt to turn around. On the turn around closer to the water, I could feel the camper start to drag well and truly, and the Dmax soon came to an abrupt halt, where we were stuck for the second time. 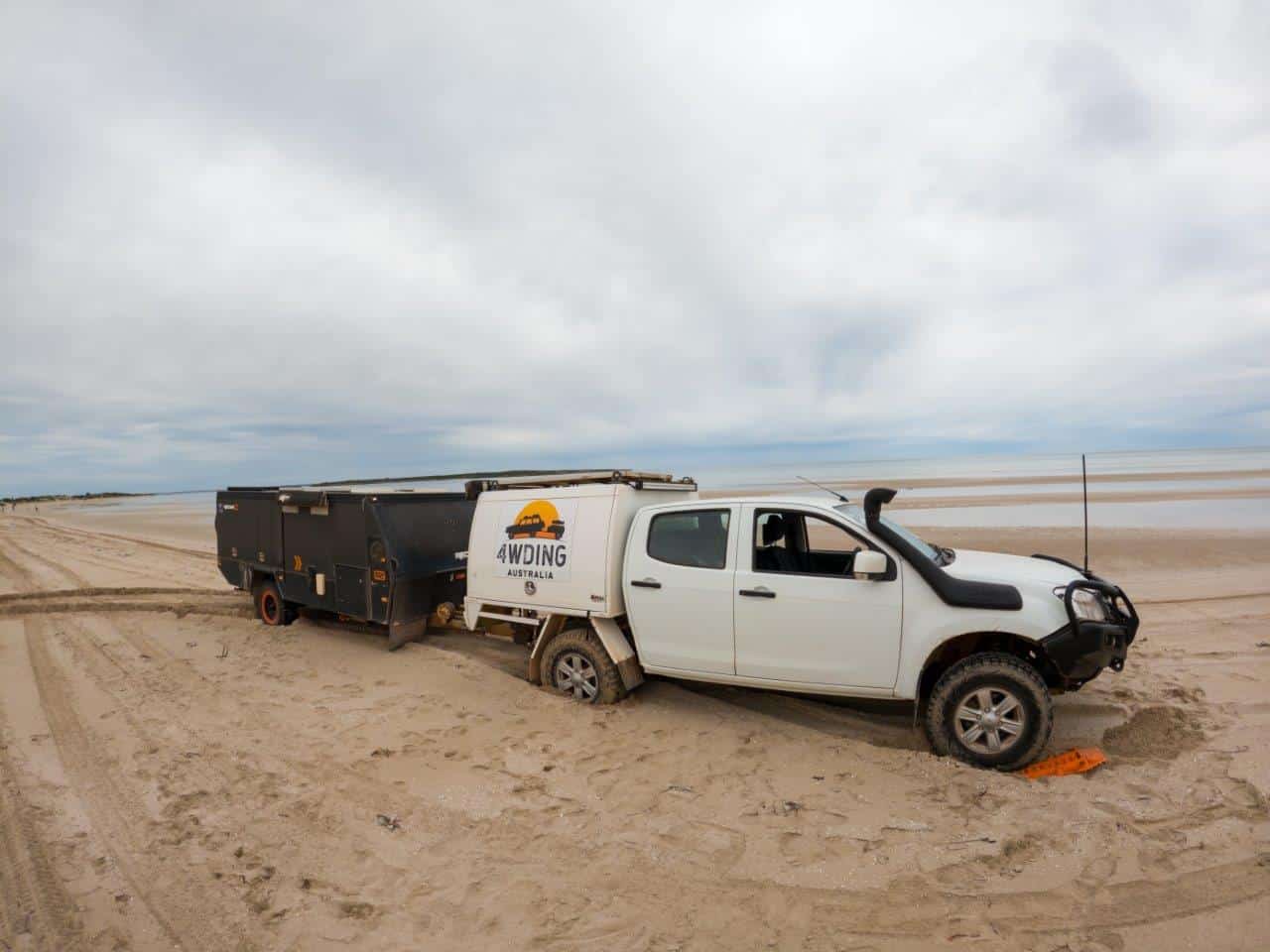 I let the camper tyres down to 25 PSI (from nearly 60) and gave it a bit of a go, but soon realised I was just wasting time and making life hard. 10 PSI in the front, 11 in the rear, 1 Maxtrax under each wheel and the rear locker on, and I crawled up the Maxtrax, on top of the sand and had no further issues driving along. 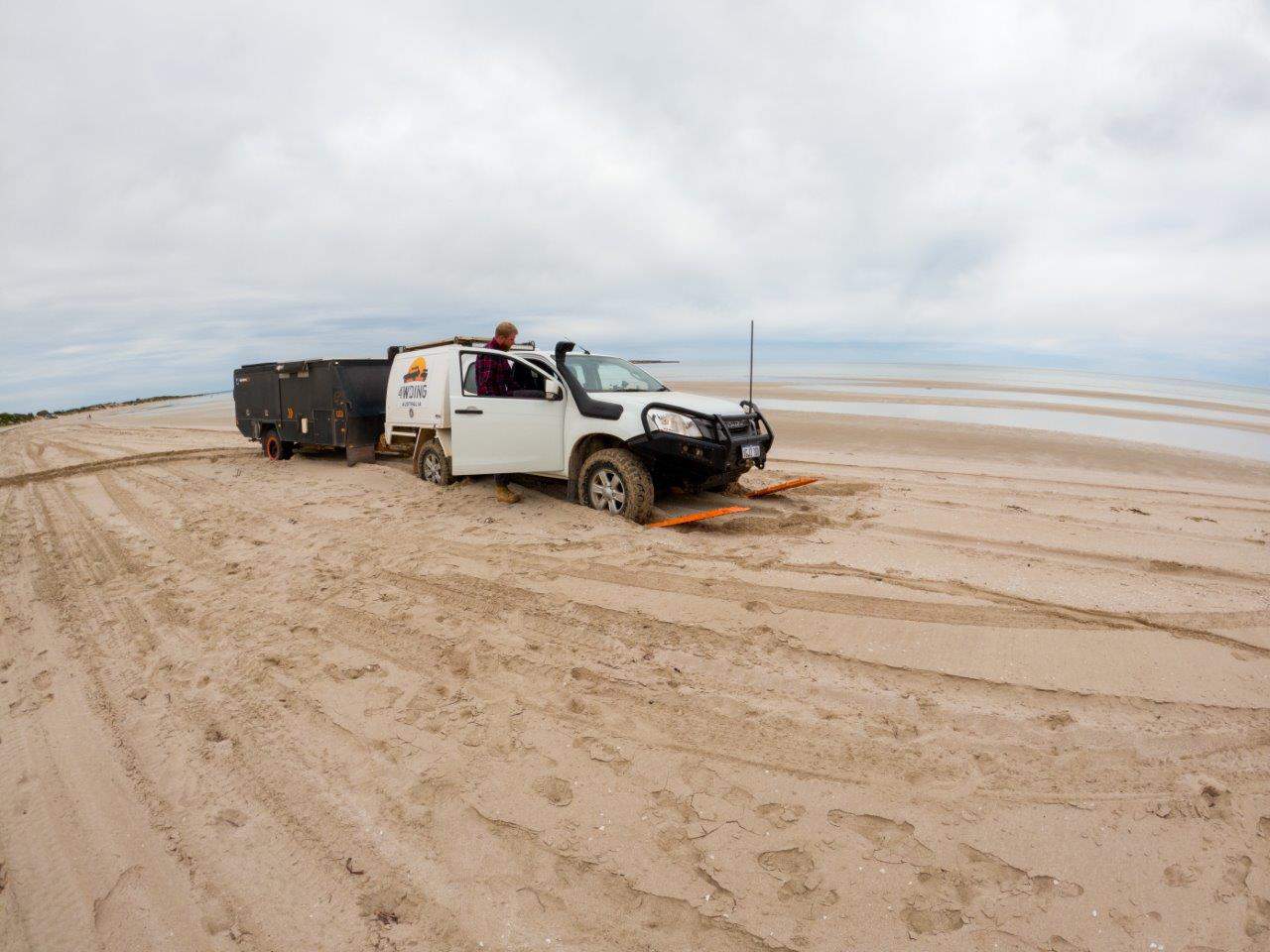 After dropping all tyres right down and using 4 Maxtrax, it just popped up

Looking back, all I had to do was drop some air out of the Dmax tyres and I would have had zero issues and a fair more relaxing entry, but even after doing it for so many years its so easy to take the ‘she’ll be right’ attitude, and end up copping it. 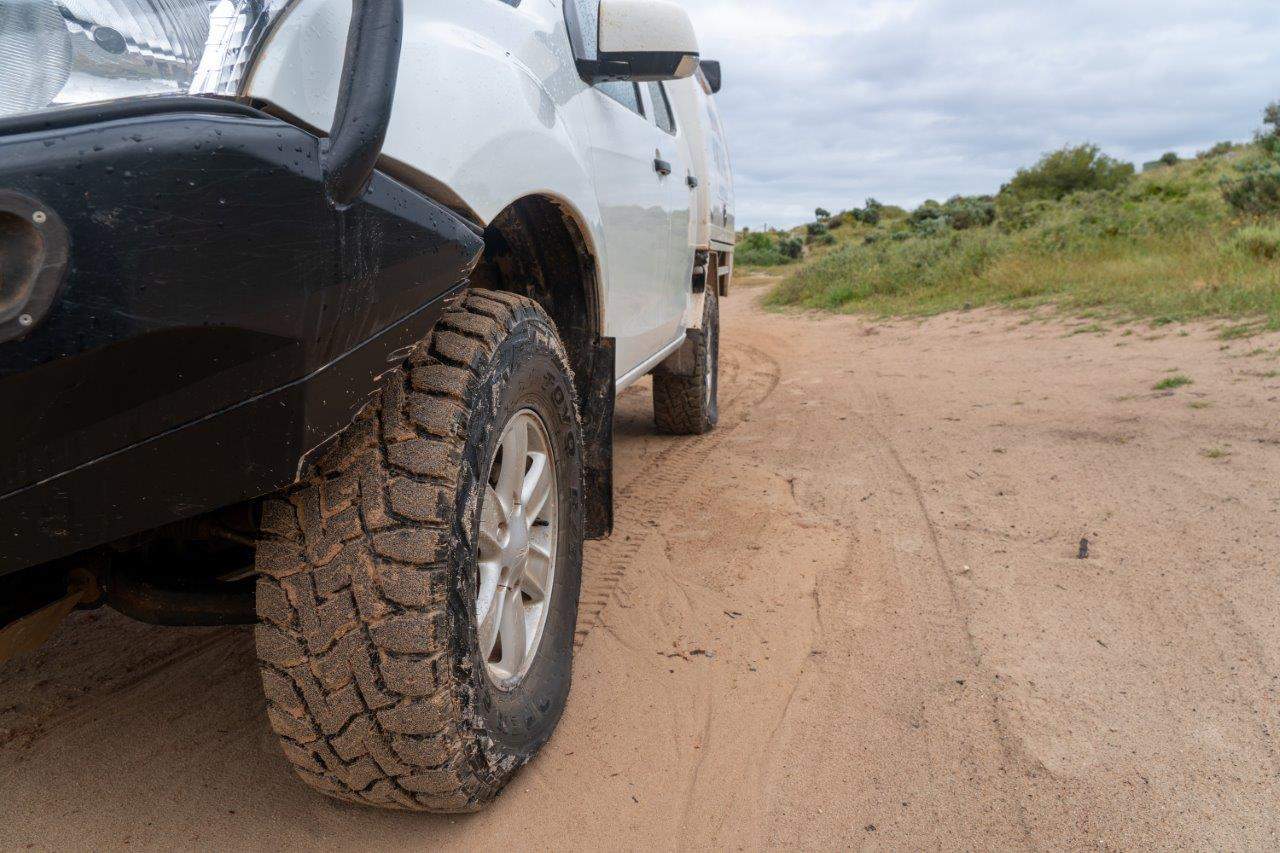 No harm no foul, but getting the right tyre pressure for beach driving is imperative early on, or you pay for it!

What is the right tyre pressure for beach driving?

Our go to tyre pressure for soft beaches is 16 PSI, but if its hard you can start at 25, or 20, and then go down as needed. A good test is to cruise along in second gear low range on the beach, and put it in idle. If the vehicle continues to roll for some time under its own steam, you’ve got decent tyre pressures. If it comes to an abrupt stop, you need to let some more air out!

If you really need to, you can go down to 10 PSI, or even lower, but be careful turning and pump them back up as soon as you are unstuck. Of course, all of this depends on the weight of your 4WD.

Have you had any entertaining experiences with the wrong tyre pressures for beach driving?