Caravan and Camper Wheel Alignments; is it needed?

About a year after getting our Lifestyle Reconn R2 a mate pointed out it had pretty nasty tyre wear going on. We’d been travelling for a couple of weeks, and were parked up at Exmouth Lighthouse Caravan Park.

I regularly check the camper, but hadn’t picked up the tyre wear, and could now see it needed some attention, and quick smart. 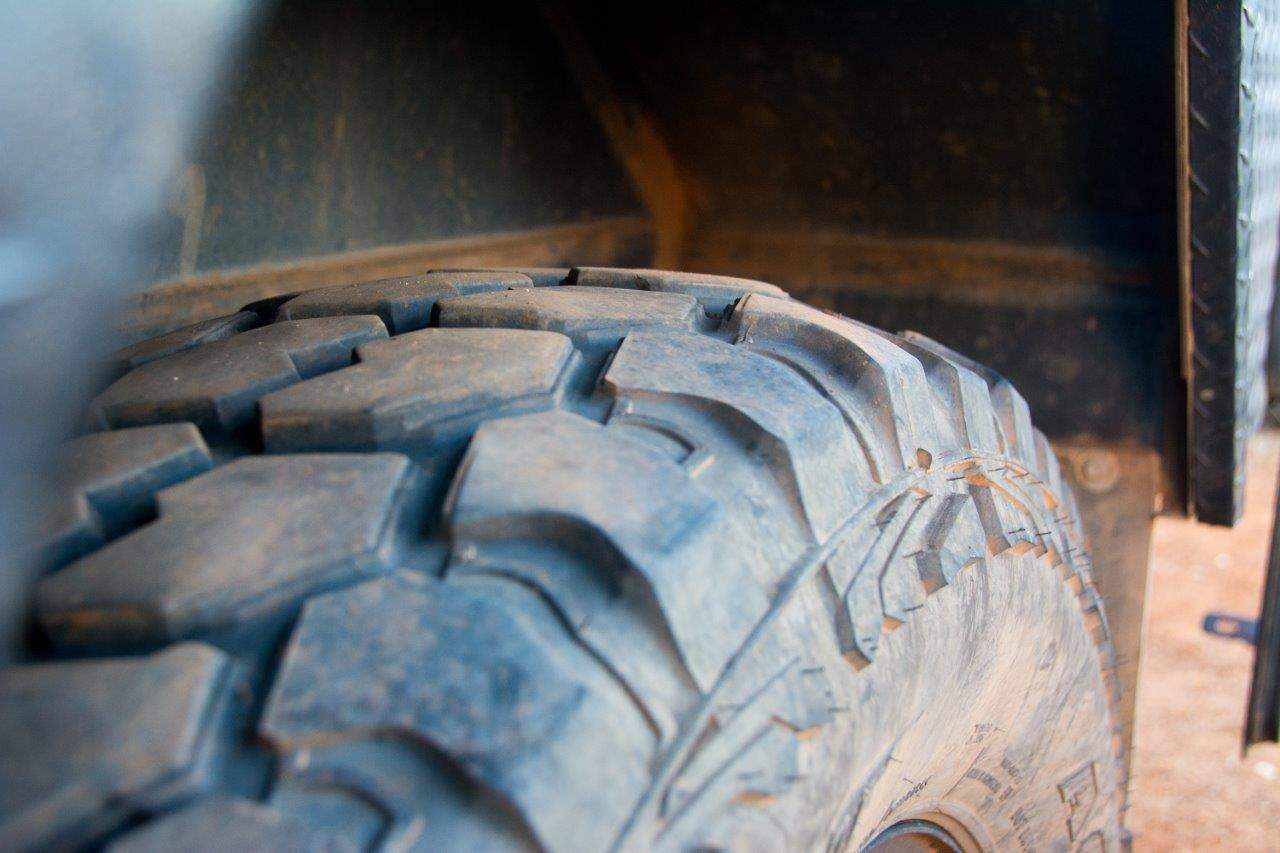 The tyres being run are muddies (Achilles desert hawk XMT), which are notorious for wearing badly on a caravan or camper trailer (not that brand, but muddies in general), but it was obvious the problem was beyond just the type of tyre, with it scalloping and only wearing on the inners of both tyres.

If you aren’t familiar with scalloping, its the wear pattern on a tyre where one lug wears more than the next, and you end up with an up, down, up down pattern. In my case, it was about 4mm difference between each lug!

If that sort of wear was on your vehicle, you’d have one of the loudest rides around, with the tyres constantly whirring as you drove along. We don’t notice it as its so far back, and you aren’t directly riding on it, but its not good.

Like your 4WD or car, the tyres on many Caravans and camper trailers require alignment from time to time.

If you don’t do this, you’ll find the tyres wear out poorly because they aren’t contacting the ground correctly, or they aren’t pointing straight ahead. This can happen if they aren’t set up correctly when new, adjusted properly or they move when travelling off road.

The first port of call for me was to ring Cruisemaster, who made it pretty clear that the suspension was supposed to be aligned every 10,000km, and regularly serviced too. Given it was a second hand unit, and we’d never had it done I rang their two service agents in Perth.

With everything going on, they were both booked out for more than 3 weeks, and that put a hole in our plans as we had numerous trips booked that it would interfere with. 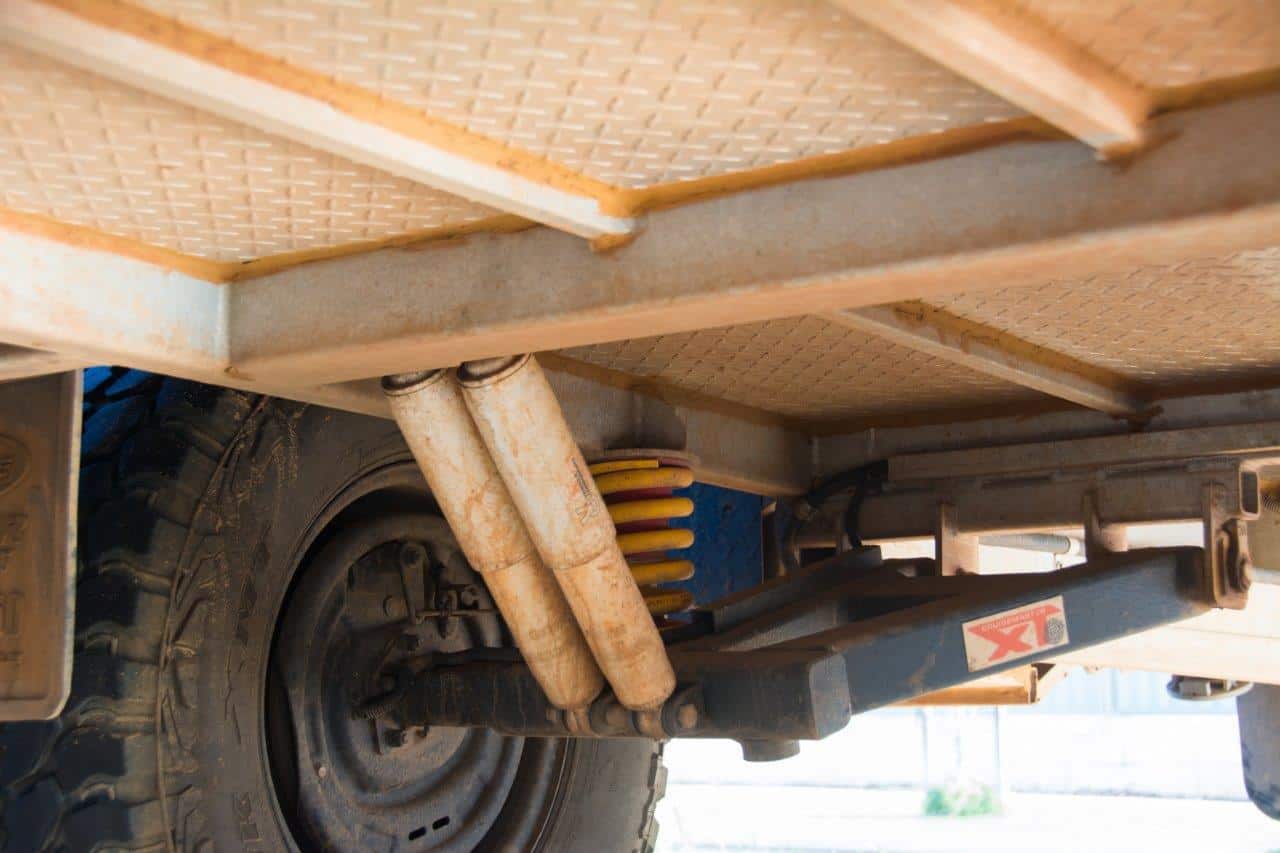 Flipping and balancing the tyres

To stop the wear getting worse in the mean time, I removed the wheels and took them to a tyre shop to have the tyres flipped on the rims. The manager was easy to deal with, but seemed confident that the damage was caused from the wheels not being balanced. Given the wear pattern this is impossible, but it might have contributed to the scalloping.

This is common practice with trailers, and most caravan and camper trailer manufacturers don’t bother with balancing tyres, once they are fitted to a rim. I guess this is just a cost cutting exercise, and given you aren’t in the trailer when its driving you often don’t notice a difference.

It is worth while getting your trailer tyres balanced though, as the tyres will wear better, your brakes will perform better and your wheel bearings will be put under less stress.

The following day, I picked the trailer up with the tyres flipped and balanced, and threw them back on the camper. 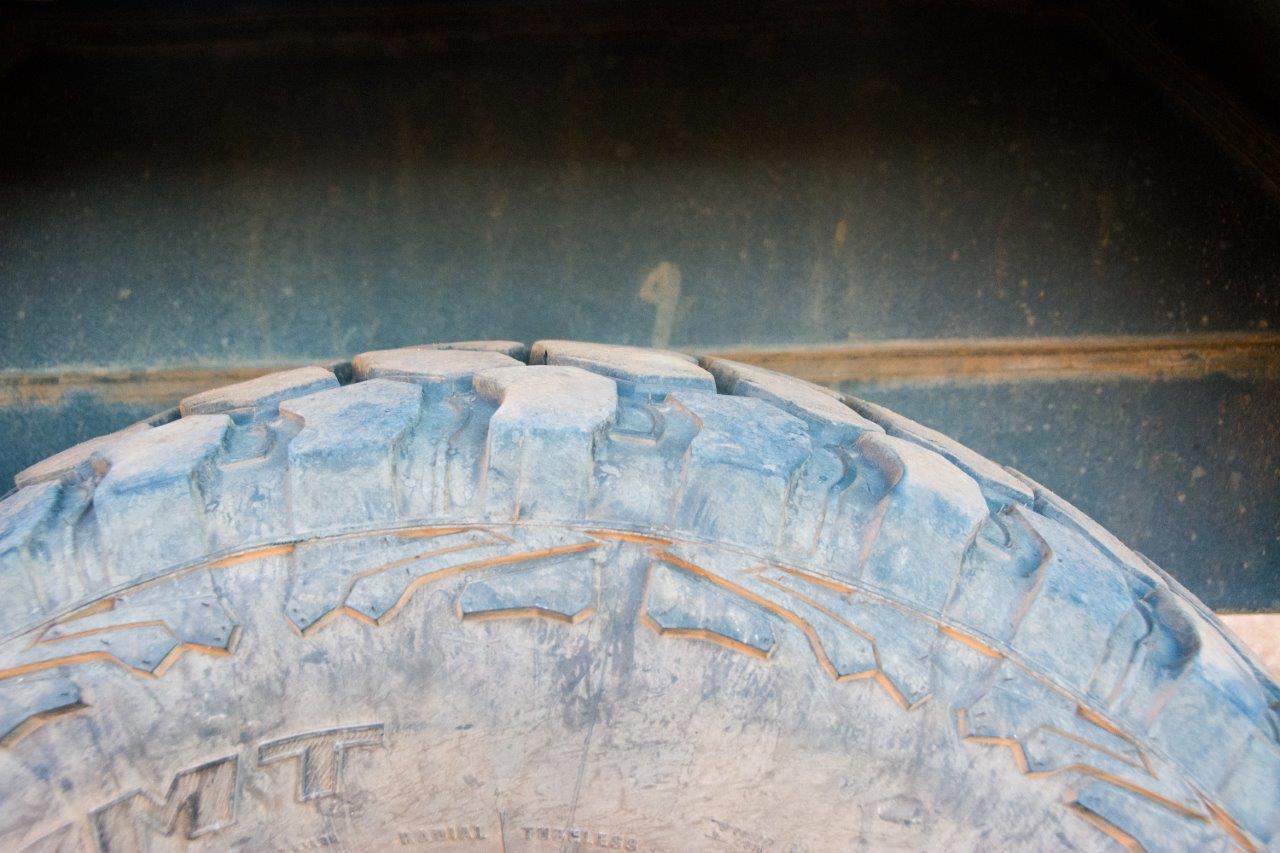 Tyres flipped around, with the bad scalloping now on the outside edge

After one short (under 800km) trip, it was obvious the tyres were wearing badly again, this time on the new edge. I rang around again, and managed to score a wheel alignment from a mobile caravan wheel alignment company who also does trucks, by the name of WRC Mechanical.

Getting the Caravan Wheel Alignment

Will came out early one morning whilst I was at work, set his equipment up and quickly got to work. He uses a Haweka wheel alignment system, which utilises lasers and mirrors.

He found one side of the suspension was loose, and allowing it to flop around, although there was no damage. With a tickle on both sides (although it still needs more but is maxed out) he locked it all up, and was on his way.

Now, I should have some photos to show you of how it was done, and they were taken, but they’ve gone missing and I don’t know how. My apologies.

Since then, the tyre wear has been pretty good, and we’ve learnt a valuable lesson; keep an eye on your tyres and suspension, and do what the manufacturer recommends, or you’ll end up with tyres that wear fast, and inevitably become unroadworthy.

If you are looking for a caravan wheel alignment in Perth, you can try Will at WRC Mechanical. We are not associated with him, but were happy with his service. 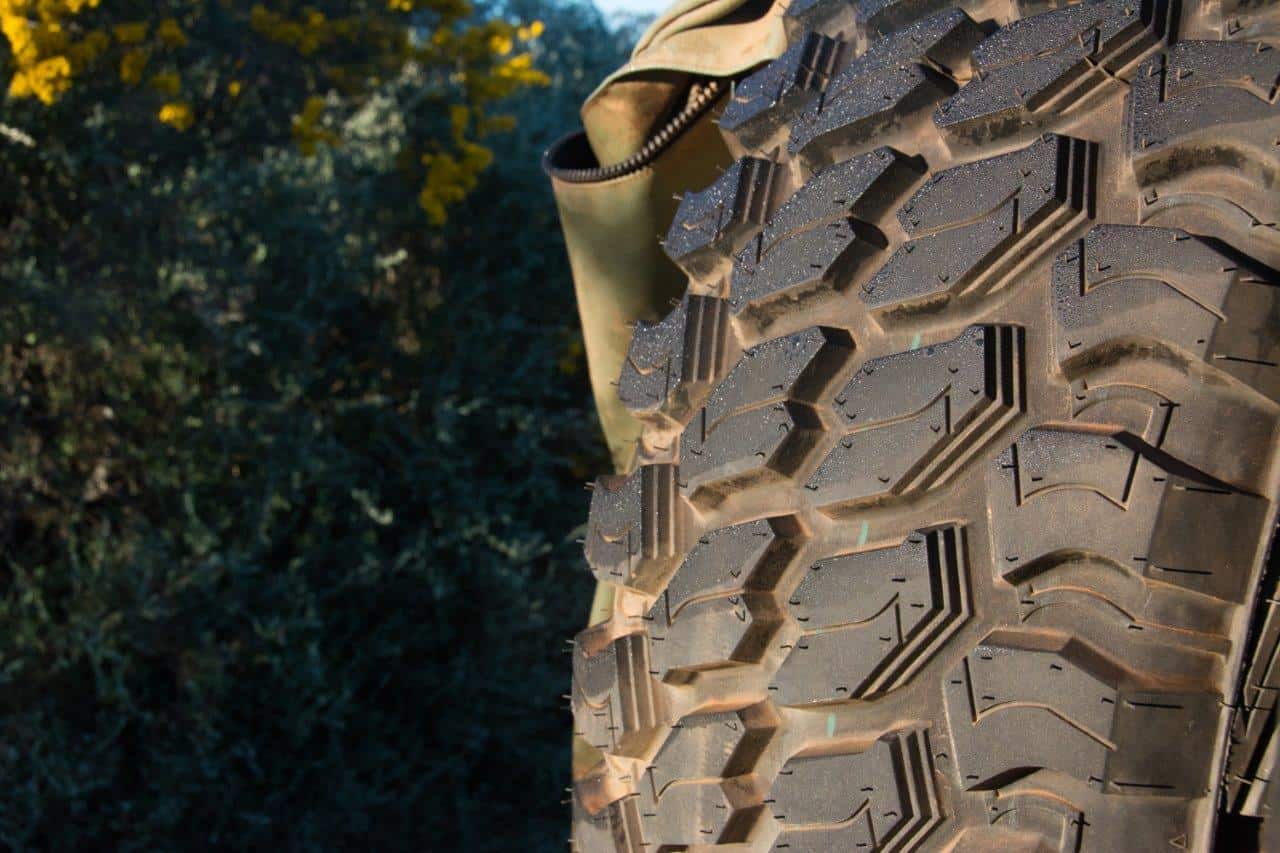 The new spare, which has about 8mm more tread on the one side that was damaged

Can you do a caravan wheel alignment yourself?

Some Caravan suspension is pretty easy to work with, and you can do it yourself, with the right skills and tools. I watched a few of the Cruisemaster videos on YouTube, and they just use a big straight edge against the edge of the tyre and measure from the chassis, then make adjustments.

This is fairly easy and simple, but if the chassis isn’t straight, you may not improve anything at all. In this way, by measuring from the hitch using a laser system your results are far more accurate.

Do you get your Caravan wheels balanced and aligned? 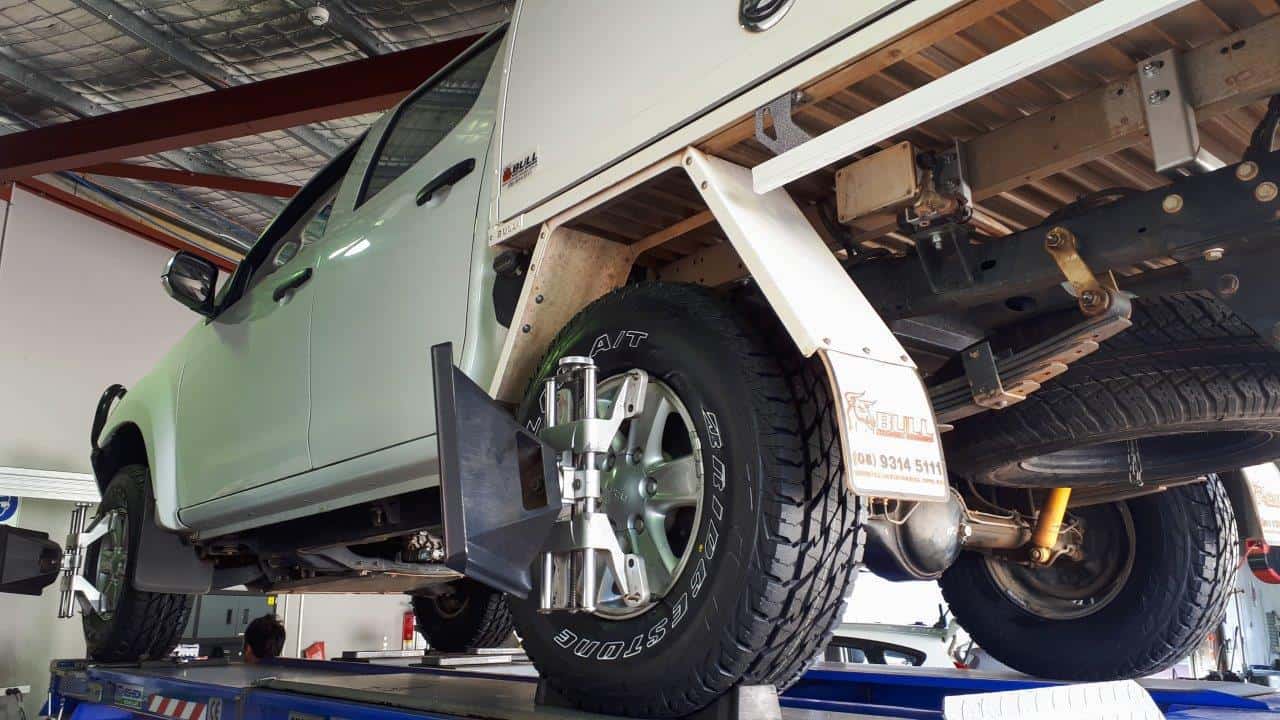 Just as you’d get a Wheel Alignment on your 4WD, campers and caravans need them too