For years and years, we had a basic stainless whistling kettle that we took camping. It worked fine, except for one thing; you could not avoid spilling hot water when pouring.

Now, looking back, I have no idea why we put up with it for so long. Commence operation Camping Kettle Upgrade! 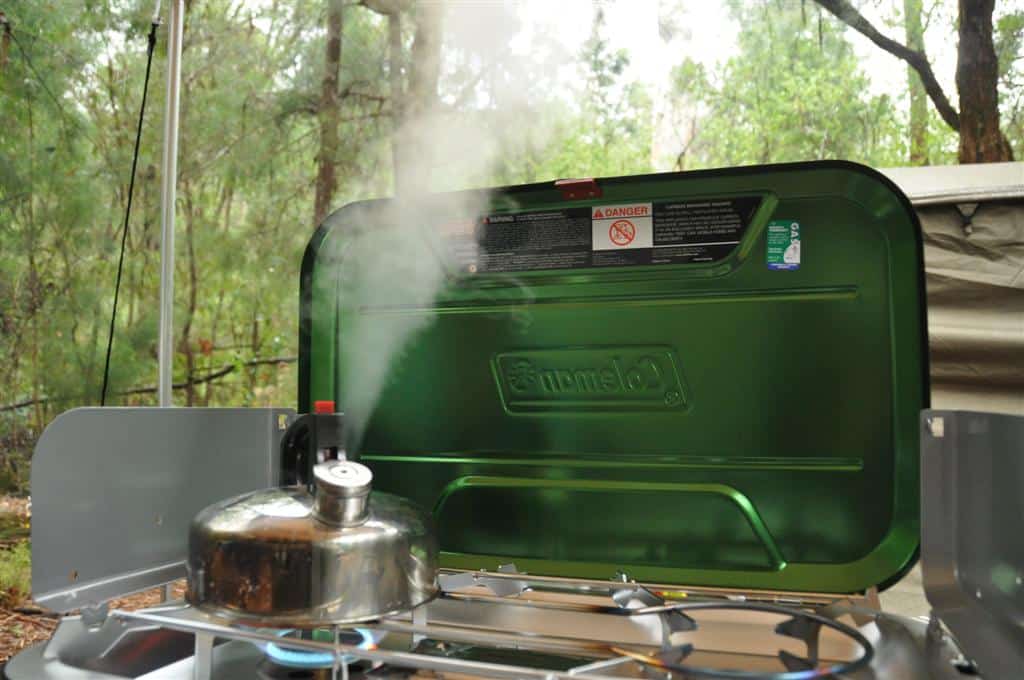 In fact, our 240V kettle died at home over a year ago, and we’ve been using the same kettle since. Going camping often meant we forgot the kettle at home, and yet we never replaced it.

I don’t know why it doesn’t pour properly. I suspect its something to do with the lip on the inside of the spout, but whatever it is, boiling water spills as you fill drinks up. The old hot water landing on you dance might look funny from a distance, but its not so funny when you are the one its happening to.

So, I did what we often do – wait until someone I know has used a product for long enough to vouch for it, and then buy the same thing.

In this case, its a Campfire 2.5L kettle, in bright blue. As usual, we picked it up from Snowys; the cheapest and best place I’ve found to get your camping gear in Australia! If you are looking for camping kettles in Australia, check them out. 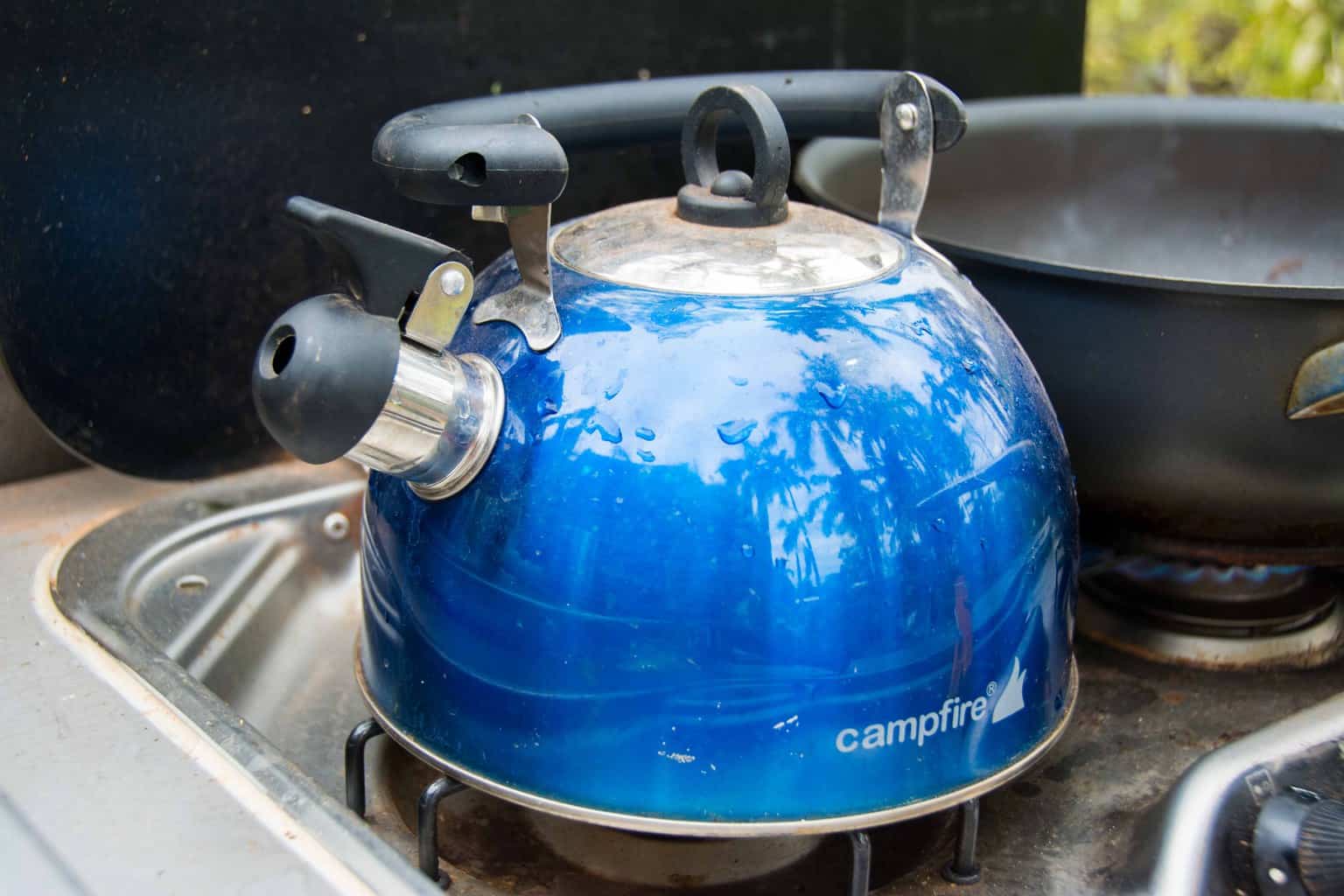 This thing is a beauty; it whistles, which we love, looks good, holds water easily and most importantly, doesn’t spill hot water down your legs. I’m not sure if its the best camping kettle out there, but its a million times better than the old one. It pours really well, is easy to fill and in general is just a seriously good camping kettle.

You can open the top to fill it up quickly, fold the handle away and its small enough to store unobtrusively. This has been heavily used, and sat in the back of our Ute for months of travelling, bouncing around and not being super well cared for, and despite a nice coating of dust, its fared very well. 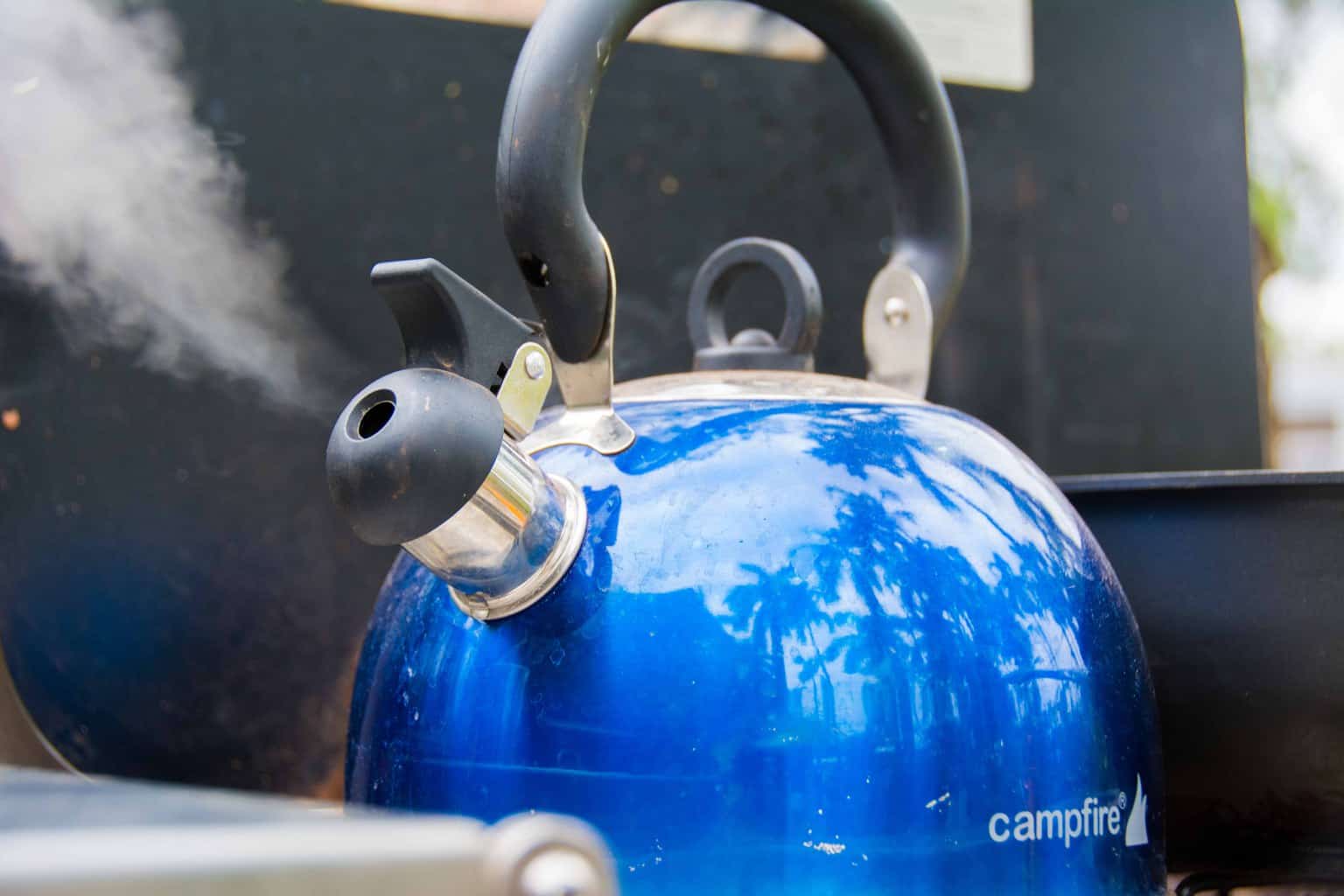 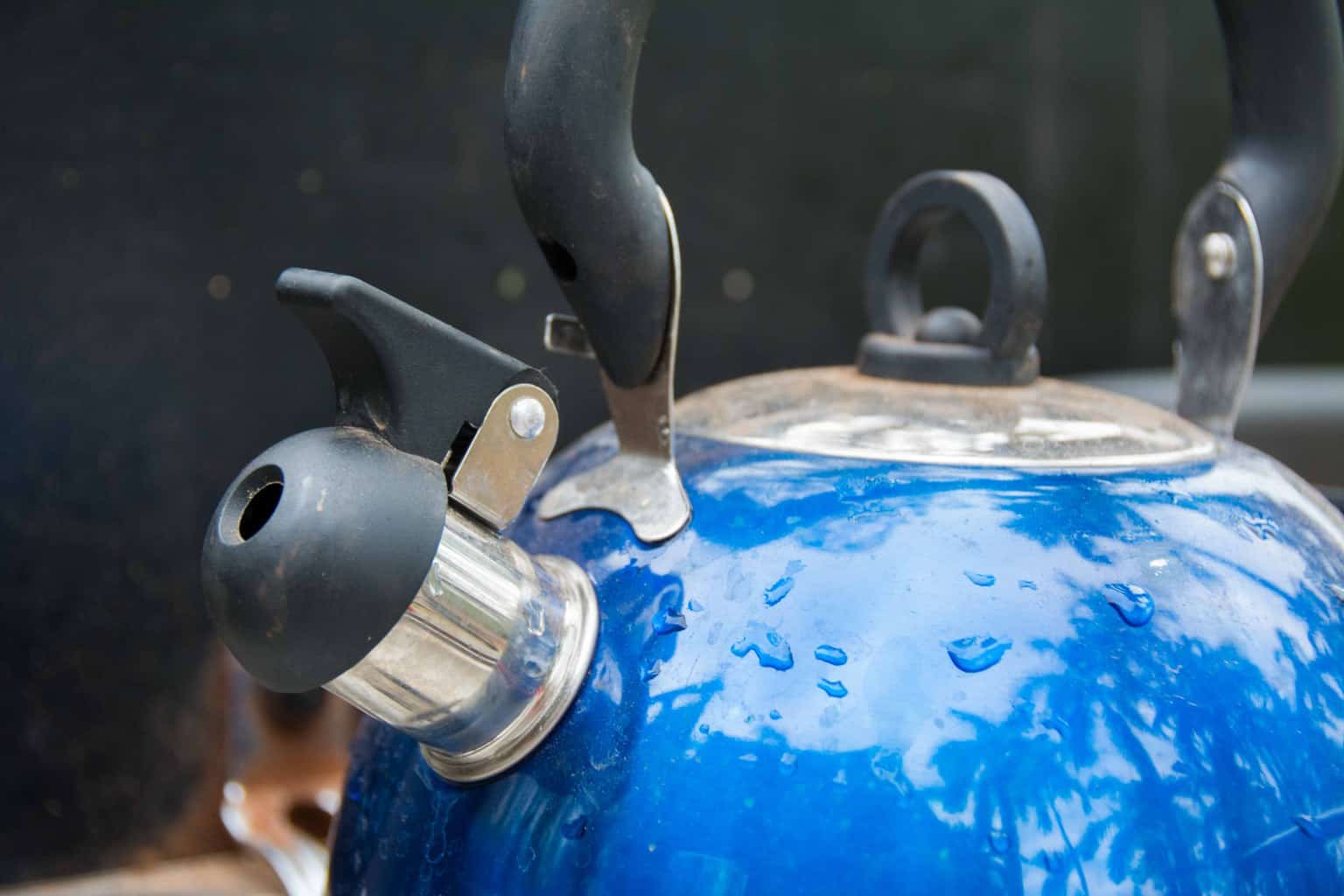 The one thing I’d like it to do is be compatible with the fire, which it isn’t, but I’ve yet to see a whistling one that you can use on a fire. Generally if we are warming water up on a fire its done in a big stainless bucket anyway, so no real issue there.

If you are looking for a new camping kettle, give this a go. We are super happy with it.

UPDATE March 2022: We’ve now been using this kettle for around 250 nights of camping, and its still performing flawlessly. It’s been bounced around in the back of our camper trailer and looks absolutely shocking, but we’ve had no issues with it at all. It gets a great wrap from us, and is the best camping kettle we’ve had.

Our friends that we mentioned earlier in the article had their handle ‘unweld’ itself from the kettle and make it essentially impossible to use, so their one went in the bin. However, it was hammered probably even worse than ours, and eventual failure is inevitable. Is is the best camping kettle in Australia? I don’t know, but its done a great job so far.

If ours was to break today, I’d feel like we got decent value from it. I suspect that it will continue performing for a long time though, as we are relatively careful with our gear!

We have however, purchased a big lithium battery setup, inverter and solar panels for our hybrid camper, and an induction cook top. Apparently this kettle isn’t suitable for induction, so we might be upgrading again in the future. We’ll let you know what we end up with!

EDIT – We’ve kept the kettle, and just gone back to using our smartspace pot to boil water on the induction unit.