Travelling Australia can be done with a huge number of different setups, and we’ve gone with a 2016 Isuzu Dmax, and a soft floor camper trailer.

EDIT: We’ve sold this, and moved to a Reconn R2 Hypercamper, which is the perfect compromise for us. If you want to know more about the move, check out Why we moved from a soft floor to a hybrid camper trailer.

We purchased the camper trailer back in 2017, and have done a number of modifications to it since, to make travelling easier and more comfortable. 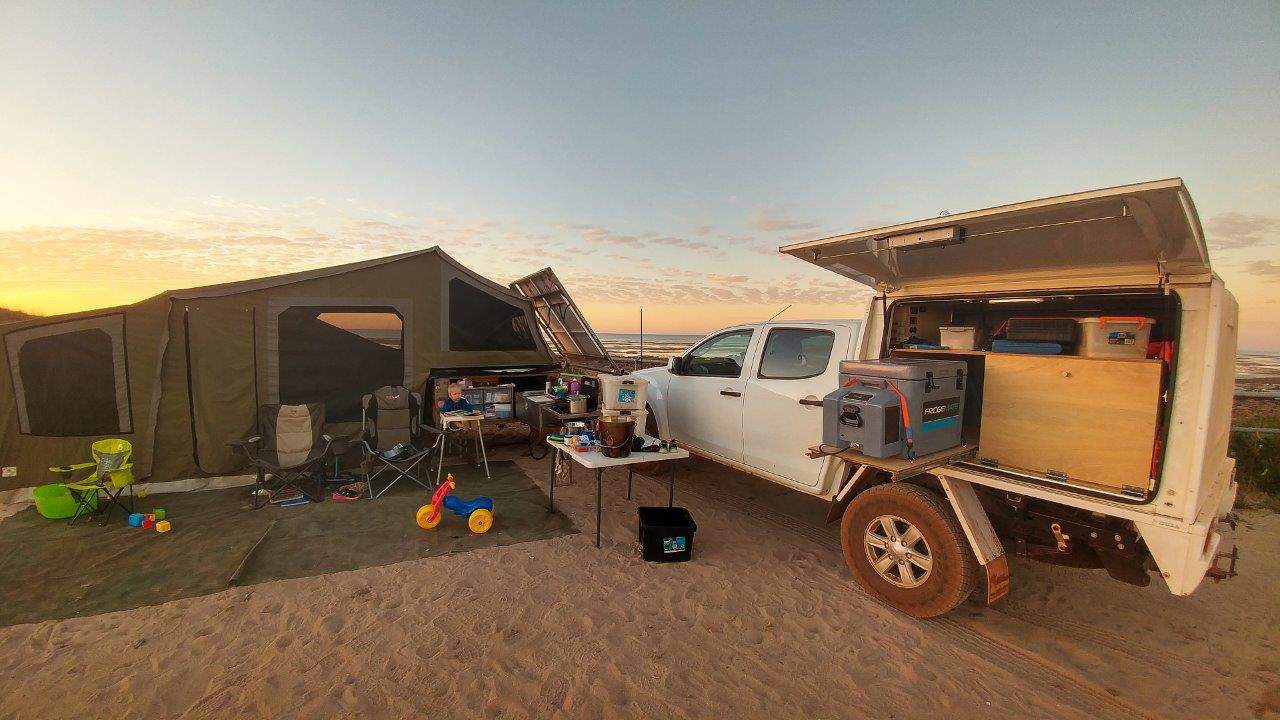 The camper trailer we picked up is a 2011 Outback Expedition Deluxe soft floor, made locally in Maddington out of 100% Australian components.

Far too many people ignore the weight of what they are towing, and more importantly, how much weight you can legally add to it. Exceed what’s on the little data plate for your trailer, and you will be in a world of pain if you have an accident and beyond that, your chances of something going wrong in the first place are hugely increased.

Our camper trailer is allowed to weigh a maximum of 1250kg, which is perfect for dragging over nasty 4WD tracks and soft beaches. It’s empty weight is 595kg, giving us the ability to load nearly 700kg of gear onto/into the camper trailer. That’s far higher than most camper trailers and caravans, and it hugely advantageous.

If you want to know more about weights, have a read of this – Towing capacity; a simple guide to keep you legal.

Loaded up and heading out to Steep Point

What did it come with?

When we purchased the camper trailer, it had the usual toolbox and spare wheel on the front, along with a boat/kayak loader that was made by the previous owner. Beyond that, it had 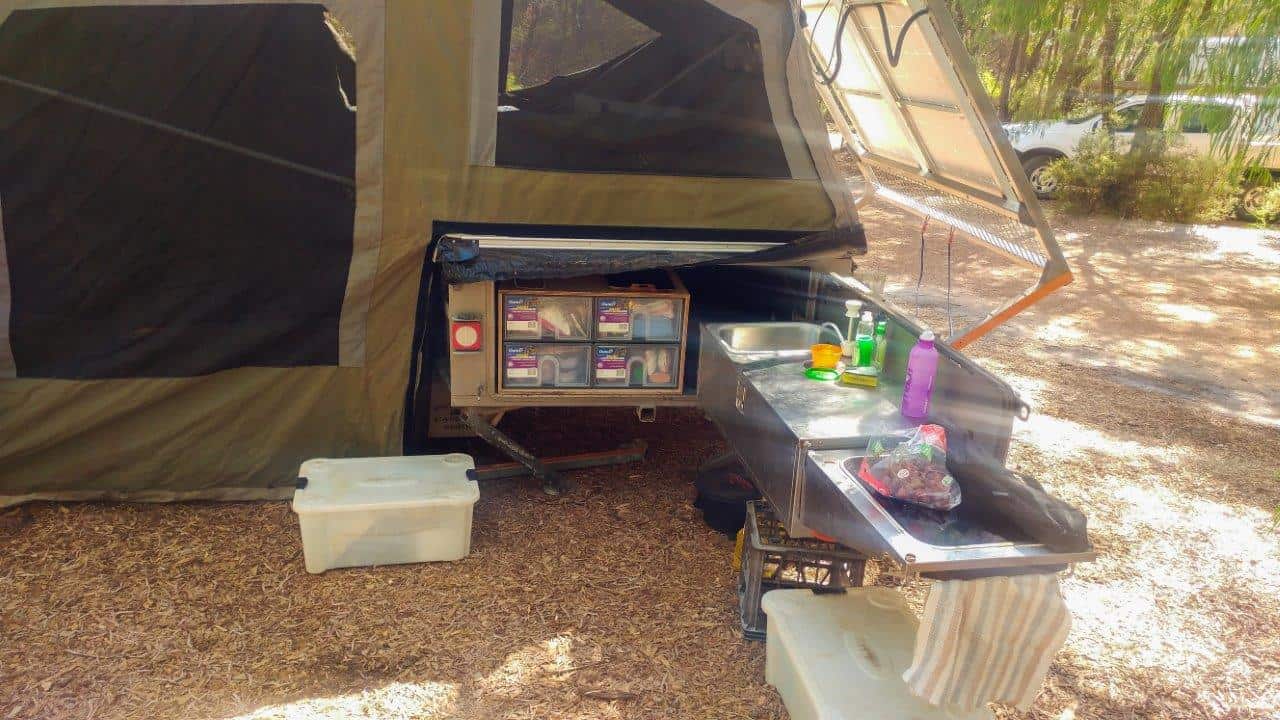 Kitchen setup on our camper trailer

The camper trailer has two water tanks; an 85L just in front of the axle, and a 50L on the drawbar. Initially they were connected together, but I have separated them in case we suffer damage to one of the tanks (which has happened!) 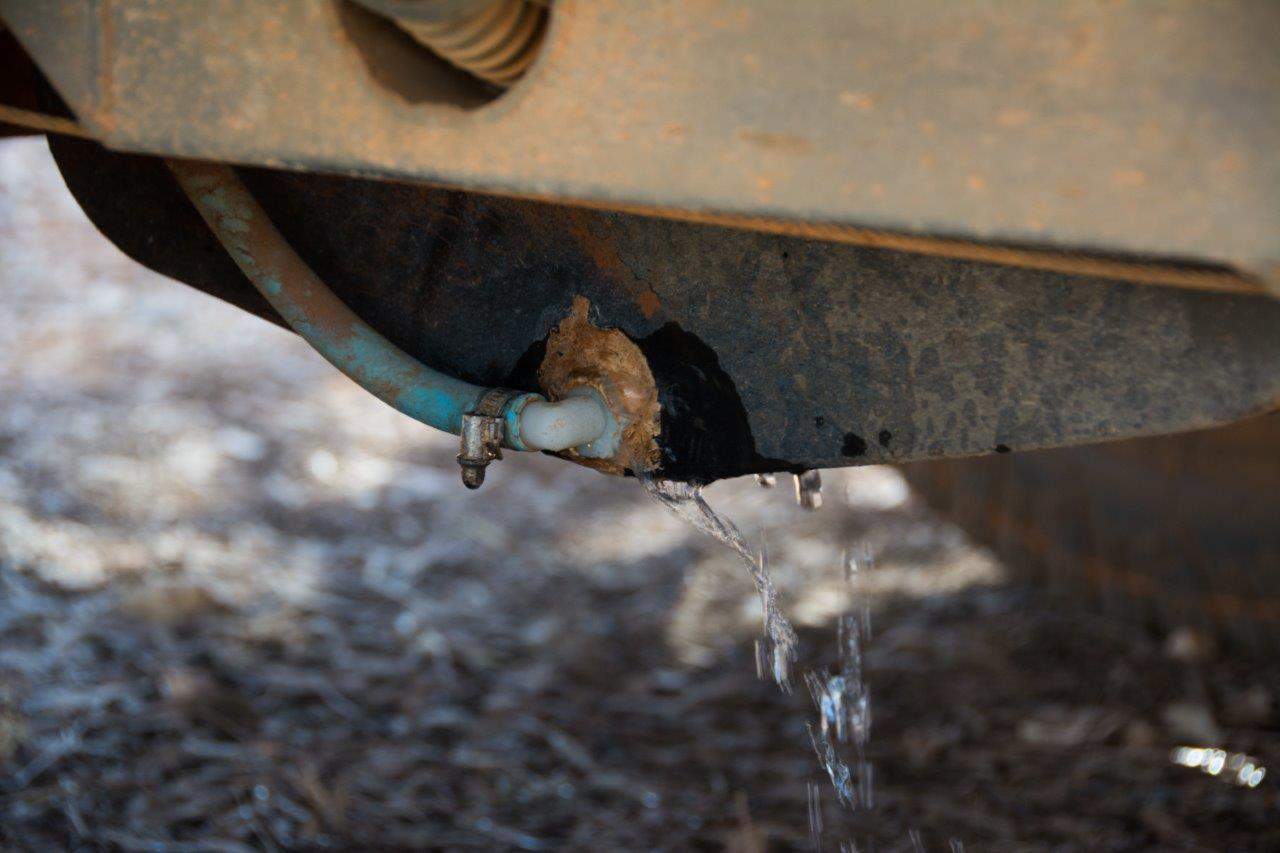 Two water tanks, with the main one suffering a broken fitting on one of our trips

The camper trailer came with a 100 amp hour battery, and a tiny 40W solar panel. The battery was already about 5 years old, and due to an upcoming trip to Steep Point, we decided to do a big overhaul to run a 55L freezer.

You can read the full camper trailer electrical upgrade here – Solar panel and battery upgrade for our camper trailer, but we fitted 400W of solar, 270aH of batteries and a nice solar regulator to keep it all in check . We now have more power than most caravans, and can live off grid forever, electrically.

The panels are mounted to a Boat Loader Solar system, which works very well. 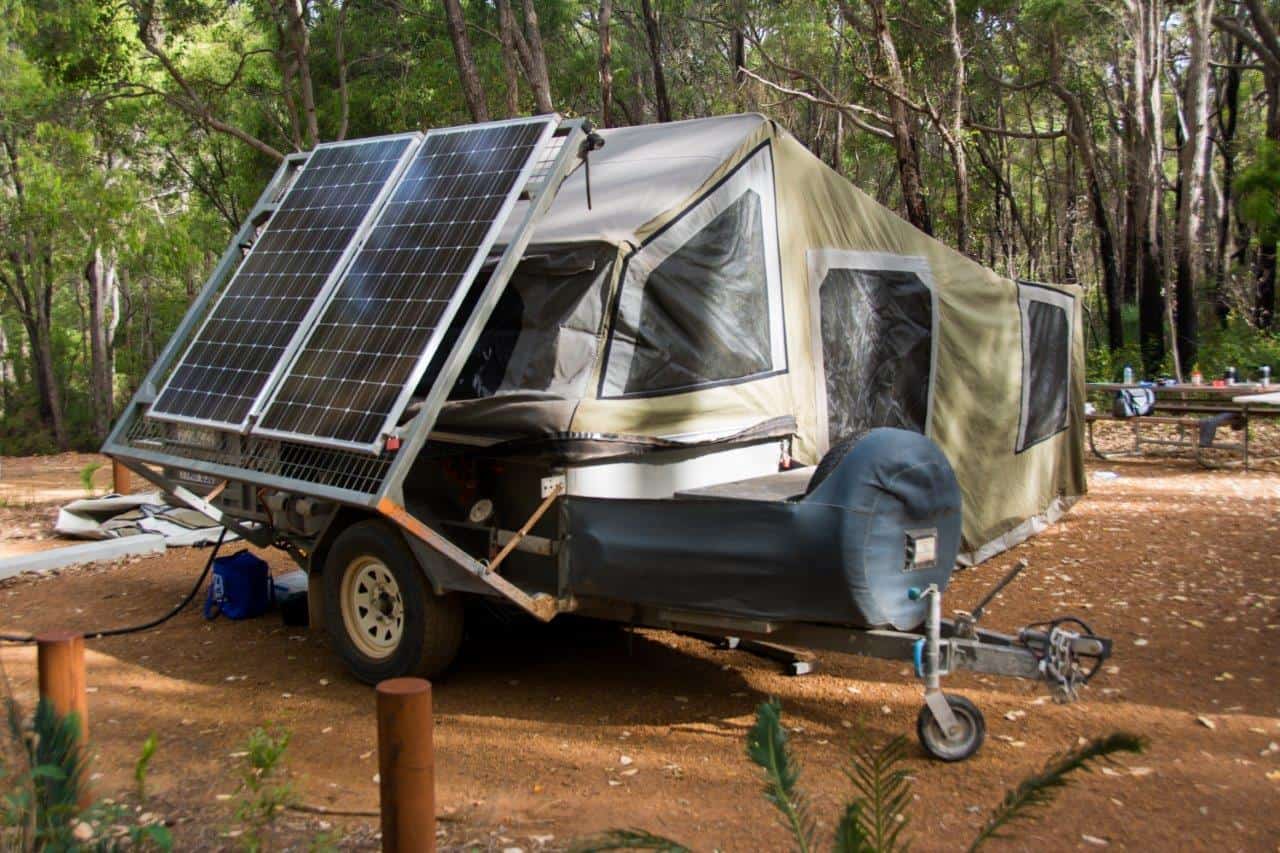 Initially, we were just using the 2 little drawers in the camper trailer and then plastic tubs. These are great in some ways, but a right pain in the backside in others. Constantly moving tubs around and having to bend down and sort through them for what you want became tiresome real quick.

The simple, and economical solution was to bash out a new pantry from 12mm ply, and make use of the Oates plastic drawers from Bunnings that have found their way into thousands of peoples camping setups. You can read about the upgrade here – Building a pantry for our camper trailer.

It’s a good idea to be able to swap wheels over from your tow vehicle to your trailer and vice versa, and once I had committed to 265/75/16 Toyo AT2 tyres on the Dmax on factory aluminium wheels, I picked up 3 extra for the camper trailer. We now have 8 in total, with only 6 on the ground at any time.

The camper trailer will take 3 jerry cans, which is great as it means we can carry extra diesel for the Dmax. I considered fitting a long range tank (and still may do in the future) but wanted to keep the weight down on the vehicle (even though it needed a GVM Upgrade!) so storing jerry cans on the camper trailer was a simple solution.

What do we normally carry in/on it?

Our camper trailer use used to take some of the excess weight off our 4WD. Inside the camper trailer, we normally take a portable toilet, firewood, dive gear, 55L freezer, portacot for Oliver, clothes bags, bath tub for Oliver, nappies, camp oven, awning and sides.

In the front toolbox, we carry an extra portable light, three chairs, pegs and guy ropes, BBQ hot plate and a few other bits and pieces.

Where have we been with it?

As of today, we’ve done:

Overall, 112 nights of living out of the camper trailer in under two years. It’s been on some pretty terrible roads, and we’ve never had a drama with it yet. 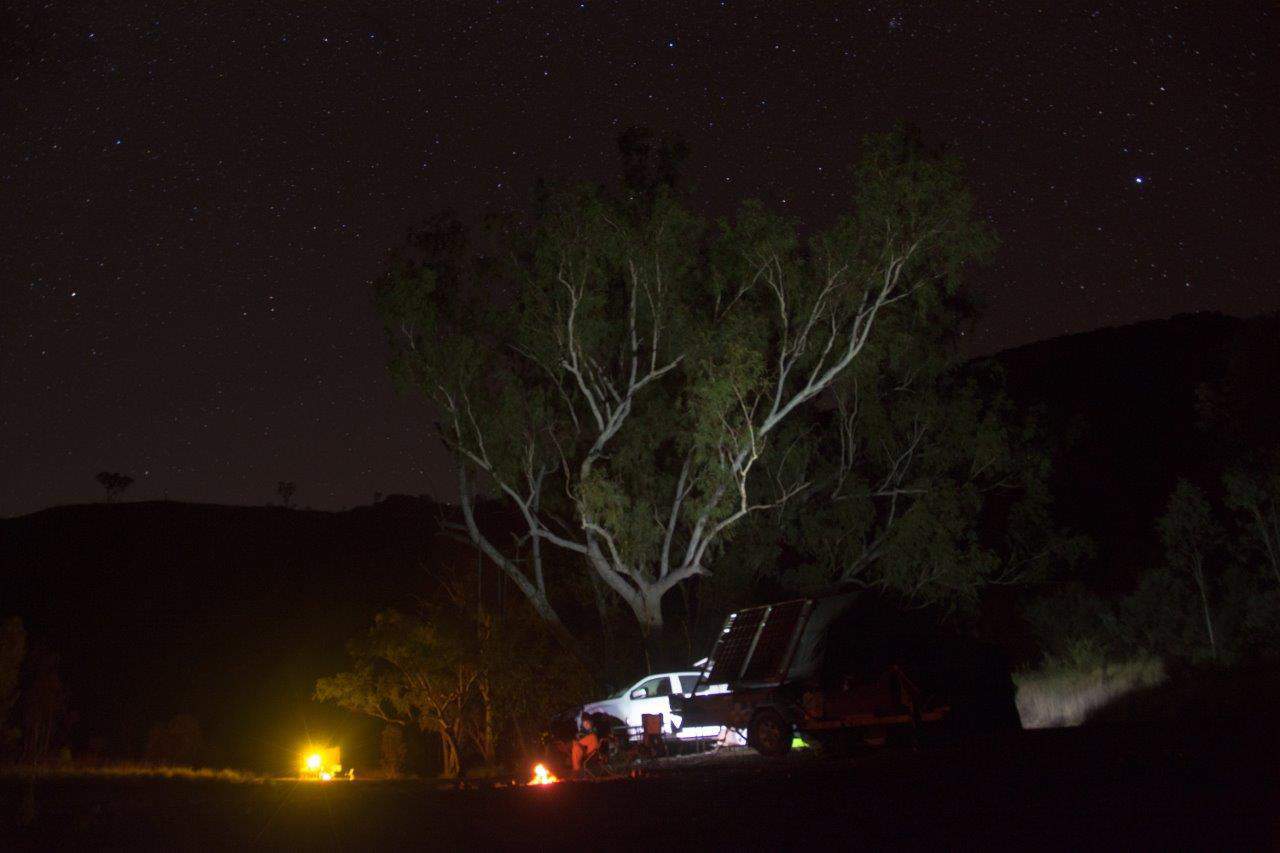 What’s not good about it?

There’s no perfect camping setup. Seriously; no matter what you buy it will have shortcomings. We love our camper trailer, but it does suck from time to time. The setup and pack down time is longer than we’d like, but more importantly its hard work due to the canvas being so heavy and can be dirty work too, if you’ve been driving on dusty or muddy roads.

Beyond that, the unit itself is massive when set up, and that can be challenging when picking a camp site. 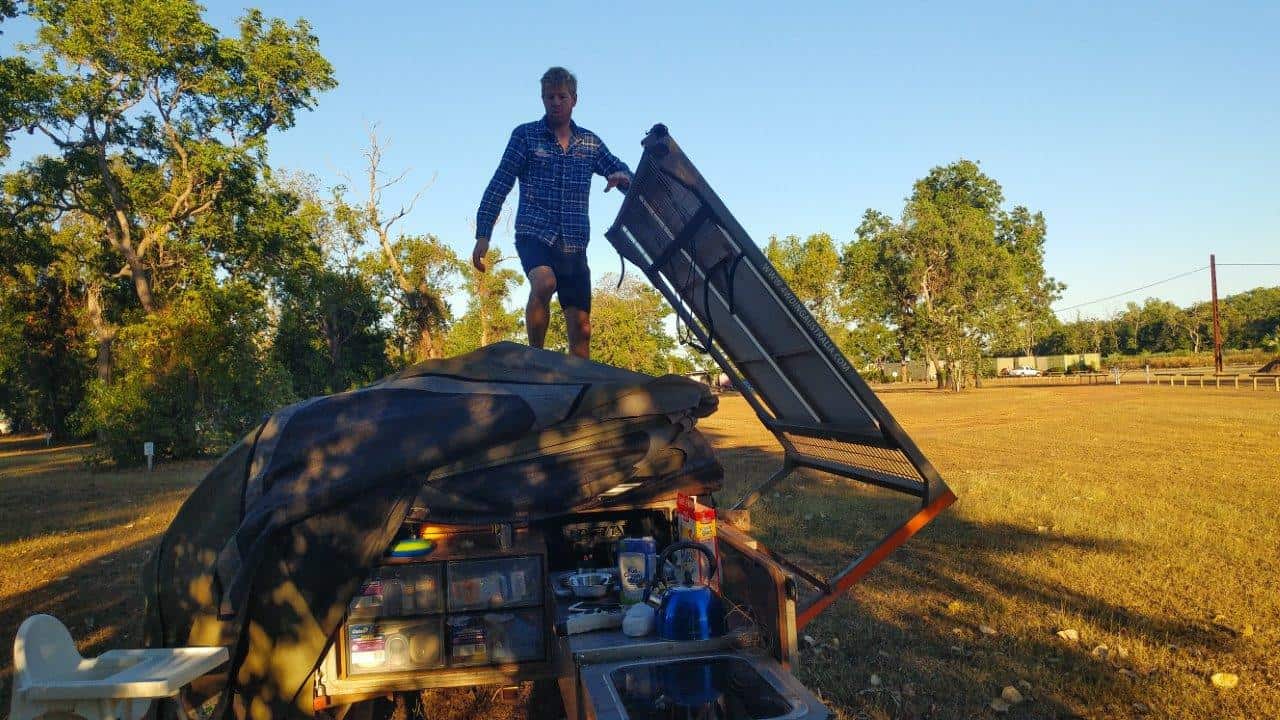 Setting up and packing away are fun and games

What’s great about it?

The camper trailer is light weight, small when packed away, has heaps of room for storage and once set up, was cheap, is Australian made and having a 55L freezer that runs with no electrical worries is absolutely gold.

Do we plan on changing it?

Until both of our kids are out of porta cots, we will probably keep this camper trailer. It would be nice to move to something that is easier and quicker to setup, with a few more luxuries but that won’t happen for a while.

We are looking at all options – heavy duty pop tops, hard floor camper trailers, forward fold camper trailers and hybrids. There will be a lot of thought that goes into the replacement though! 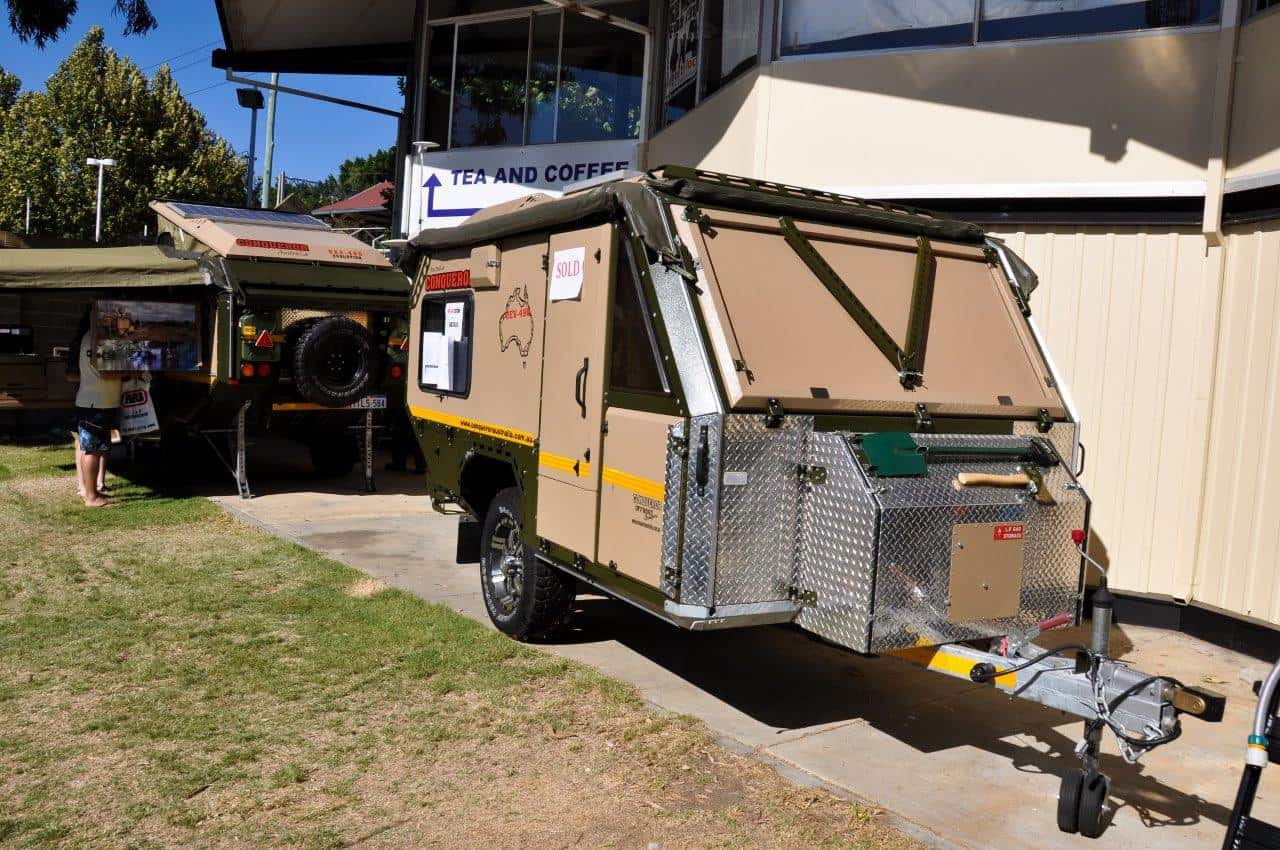 I do like the look of the UEV hybrids!

Are we happy with it overall?

For what we paid, and what we’ve done with it already there’s no doubt this was a good buy. It’s a fantastic trailer, and has done exactly what we’ve wanted it to. I mentioned above you can’t get a perfect camping setup, and this is as good as it gets for our current travelling style.