Blue Swimmer Crab; How to catch and cook them

After spending a weekend finding more Camp Sites in WA (around Mandurah), it seemed appropriate to write a post on the Blue Swimmer Crab, and how you can catch and cook them.

For those of you who don’t know, Mandurah is probably the most popular place for catching Blue Swimmer crabs (sometimes called Blue Manna Crabs) close to Perth. 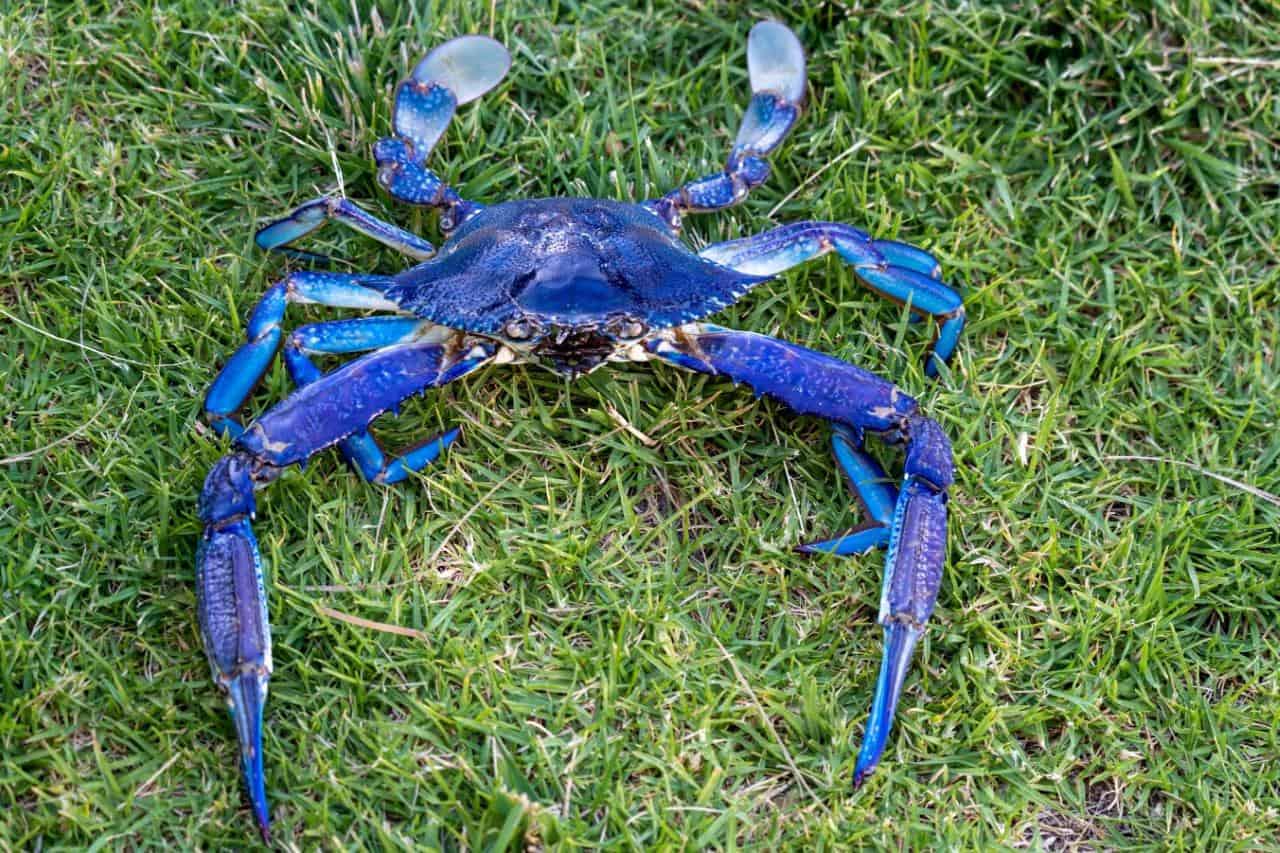 They are a delicacy that is enjoyed by lots of locals every year, and you can catch them in a number of places in Western Australia. You’ll find them in estuaries and shallow parts of the ocean, and can have quite a bit of fun catching them too. 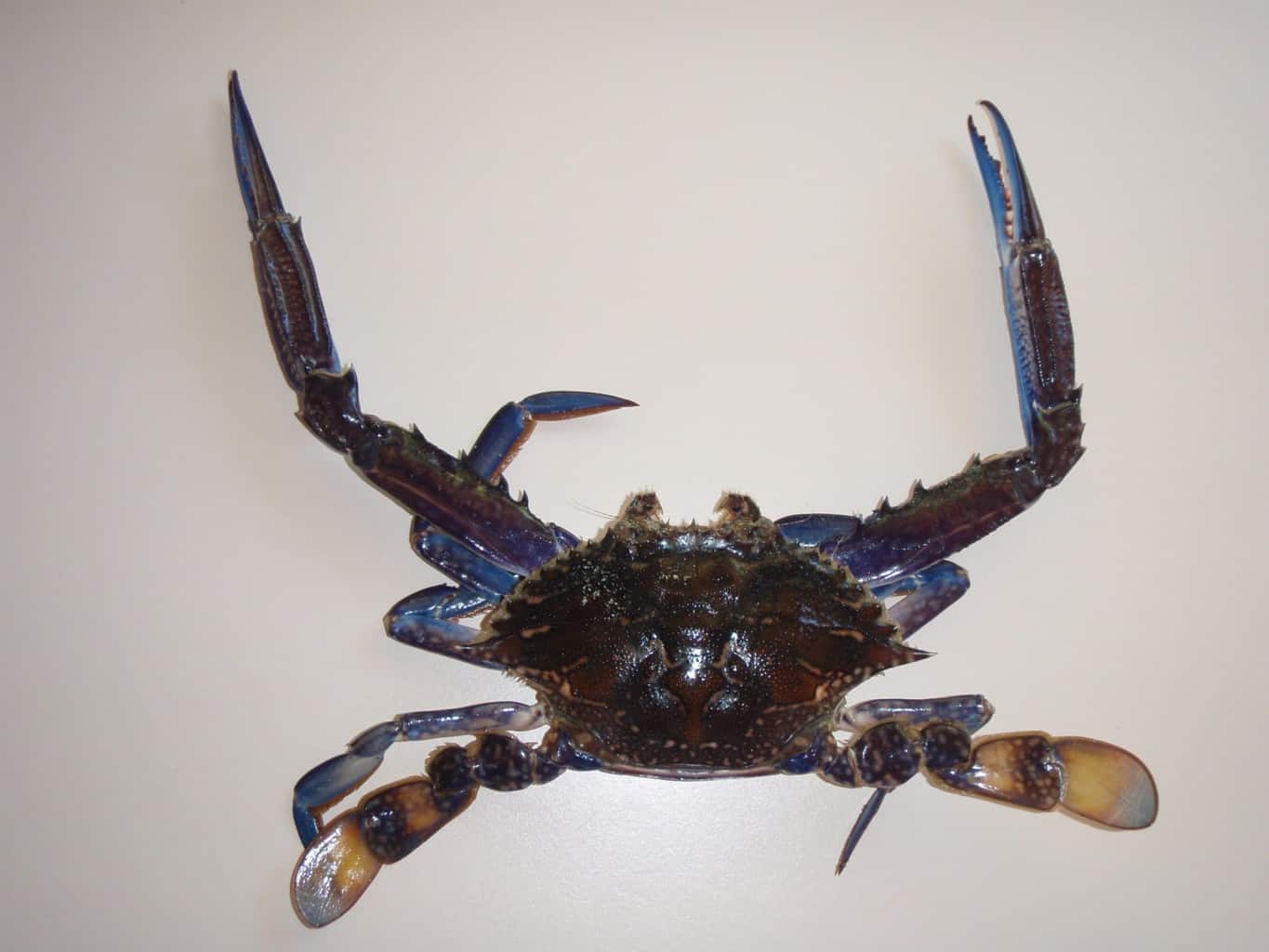 What are Blue Swimmer Crabs?

These crabs are quick moving, decent sized seafood that you’ll find between Port Hedland and Dunsborough (and occasionally outside of this).

They live in estuaries, salt water rivers and the open ocean, and can be found in water anywhere from 10cm deep to 50 metres deep. In winter time, the crabs tend to move into the open ocean.

Blue manna crabs will bury themselves into the sand so they are hard to see, and will dart out when frightened.

What size do Blue Manna Crabs have to be?

Before you go hunting for these delicious critters, you need to get yourself a measuring device (most fishing shops have them) to check the size of the crabs you catch.

As a minimum, they need to be 127mm across the two spikes in the centre of the body, or the carapace as its called. This is for WA, but in South Australia they measure them differently, and have a different size limit. 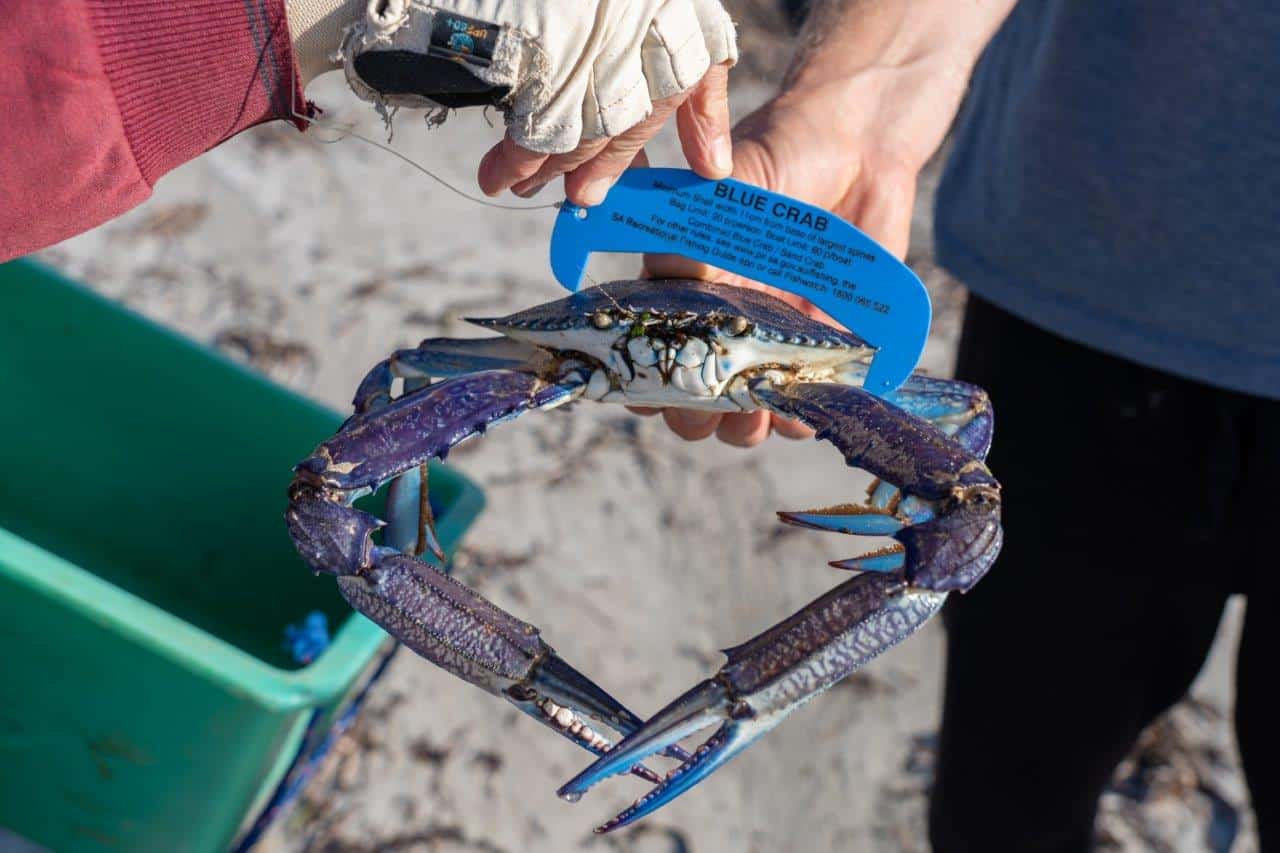 Sarah rates Blue Swimmer crabs above western rock lobster and prawns in terms of taste, and I quite enjoy them too. The actual flesh is delicious, and can be had in a number of ways.

The biggest turn off for me is the amount of time and effort it takes to get the meat out. With a decent size prawn or crayfish its a quick exercise. Over the years we’ve been spoilt spearfishing and cray fishing that we have become a bit lazy!

Crabs are fiddley and more difficult, but the flesh is certainly sweeter.

Is there a season for Blue Swimmer Crabs?

All waters (including the Swan and Canning Rivers, and ocean down to Bunbury is off limits between September 1 and November 30.

Outside of this area you can catch crabs year round.

In the swan river, you can only take 5 per person per day.

The boat limit is 20 (in Geographe bay only 10 can be females) except for the South, Gascoyne and North Coast Regions where its 40 per boat, per day. 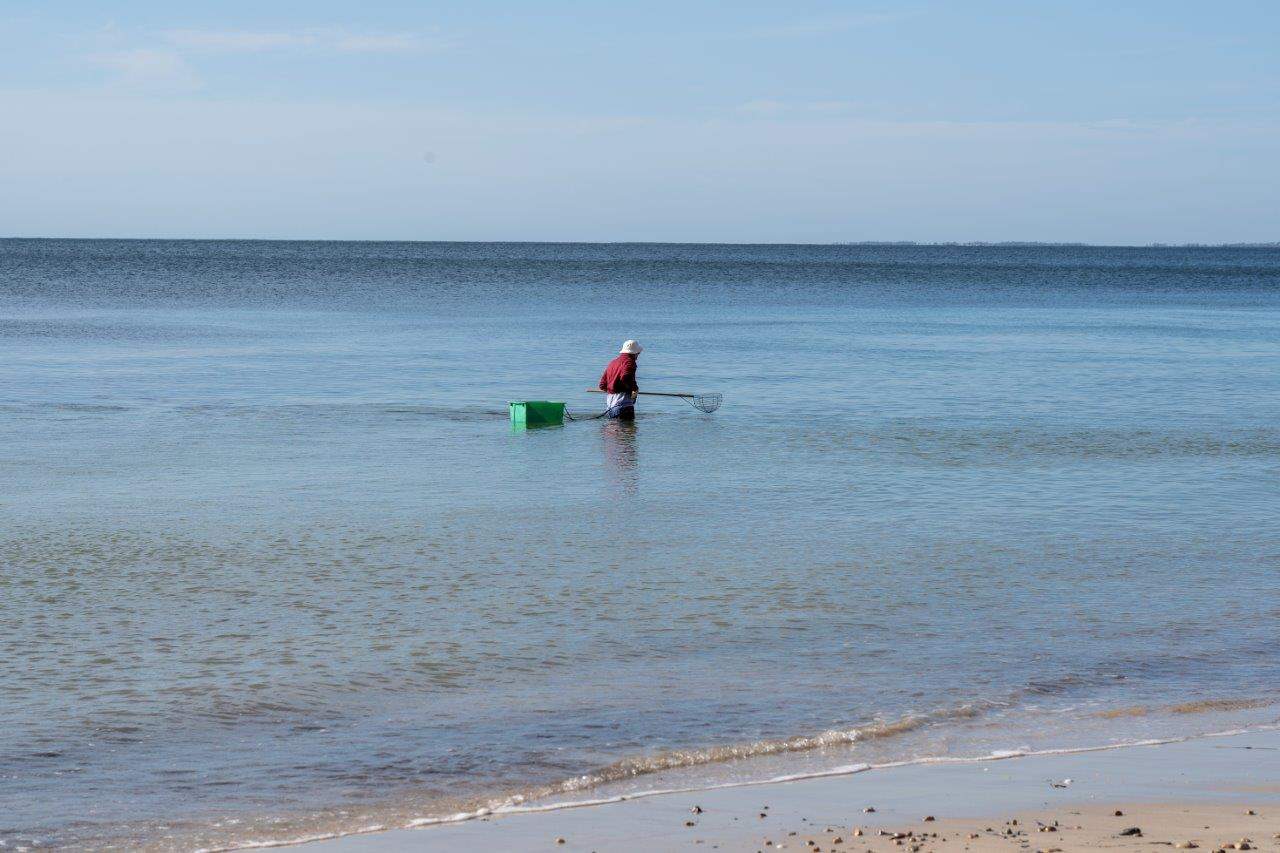 Do you need a license to catch Blue Manna Crabs?

If you are fishing for these from the shore, then you don’t need a license. However, if you plan on going out in a boat then you need at least one person to have a recreational fishing license, and in both cases bag limits apply.

These are not like Marron, which require a full license regardless of how you catch them.

How do you catch Blue Swimmer Crabs?

The most common way to catch blue swimmer crabs is to walk around in the shallows towing a tub in a tube, and when you see them through the water you scoop them up. They are quite fast and can be difficult to catch, but you soon get the hang of it.

You need to wear old shoes or booties, as you can get badly hurt if you stand on one and they bite you. Once you’ve caught one, measure it with your gauge and if its legal, and you are happy with it, you just put it in the tub.

If you head down to Mandurah you’ll see hundreds of people around the place scooping for crabs; its quite a popular fishing activity. 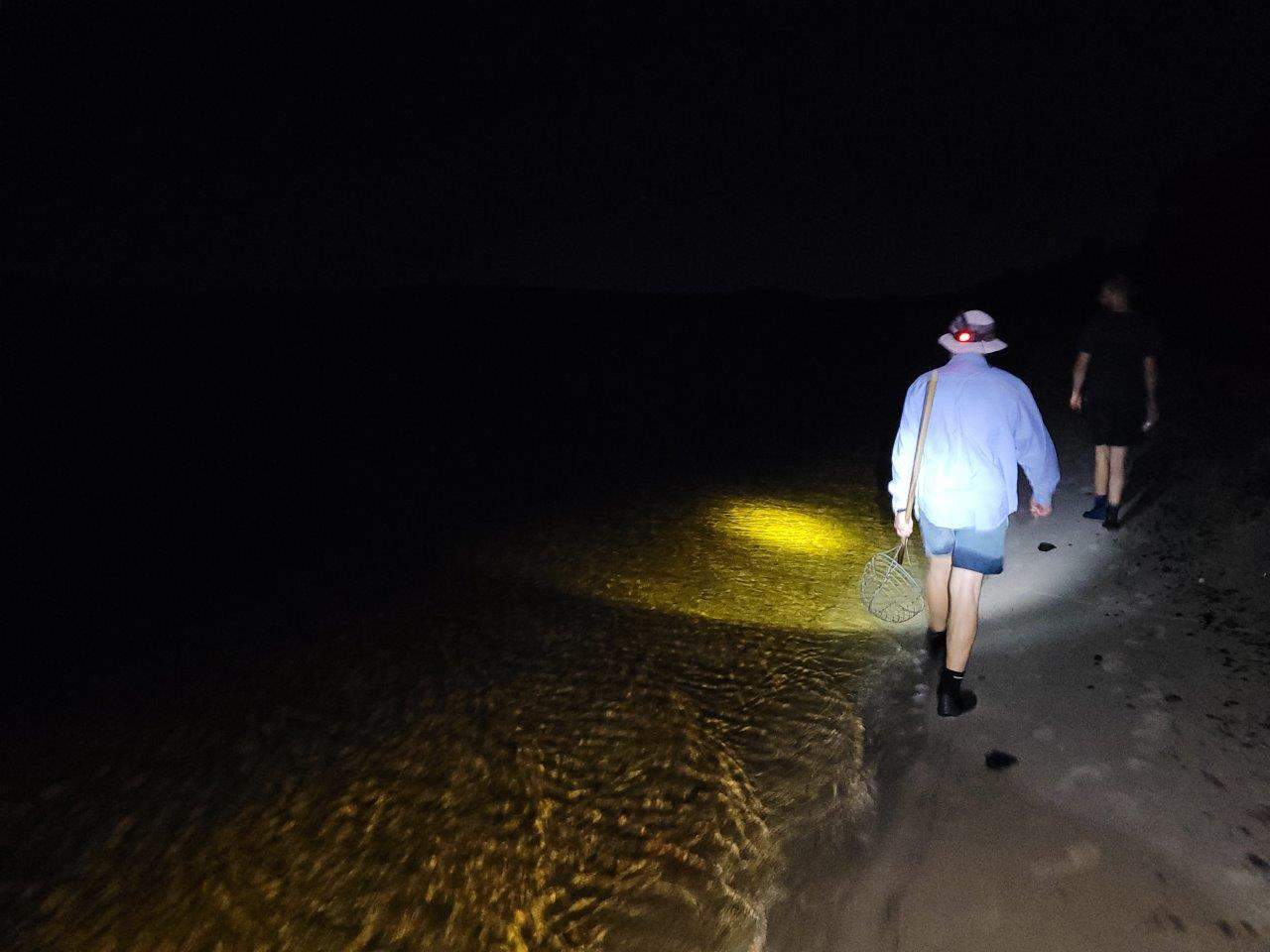 One of the more entertaining ways to catch Blue Swimmer Crabs is to put your dive gear on (snorkel is fine) and get a set of decent gloves, and head out looking for them.

We have a spot not far from Perth in under 3 metres of water that you’ll find a heap of them, and you just dive down and grab them, then check their size and put them in your catch bag.

Of course, as you’ll find out the crabs don’t just sit there and wait to be picked up; they’ll dart around and try and bite you, and it can be quite a challenge to get them. I generally use old welding gloves as the bites hurt a lot, and you just try and react as fast as possible.

The best time to dive for blue swimmer crabs is early morning, or late afternoon. If you want to take it to another level, go diving at night with a torch which is quite an eerie feeling and you’ll do well catching them too.

Lastly, you can catch crabs with drop nets as well. These must be normal drop nets, and have to comply with the regulations. To use them, you simply add meat to a hook, (or cage works well) at the bottom of the net, and drop it in water more than a metre deep, and leave it for at least 10 minutes.

People use all sorts of meat, ranging from pierced tuna cans through to chops, sausages, and often fish offal will work quite well.

Ensure you have a float on one end, and that you pull them up swiftly, smoothly and evenly or the crabs can easily get out. When they come up, measure them and keep those that are sized.

How do you cook and prepare Blue Swimmer Crabs?

The most common way to cook Blue Swimmer Crabs is to put them directly into a pot of boiling water, and cook them for 10 minutes, until they float. We normally use salt water if possible, or if not, add some salt to tap water.

Blue Manna Crabs in a big pot, ready for cooking

From there, get them out and cool them down in ice, or water as quickly as possible. From there, you stick a finger into the little flap underneath the crab, and lift the top of the crab off (which requires a bit of force.

This will pull all of the guts out of the crab, and you toss that part away. Pull the lungs off the sides, and rinse any muck away, and then its good to eat.

Now, you’ll notice that some people dispose of the crabs in ice when they catch them, and then gut them before cooking. Either way works, and we’ve never done the gutting before cooking.