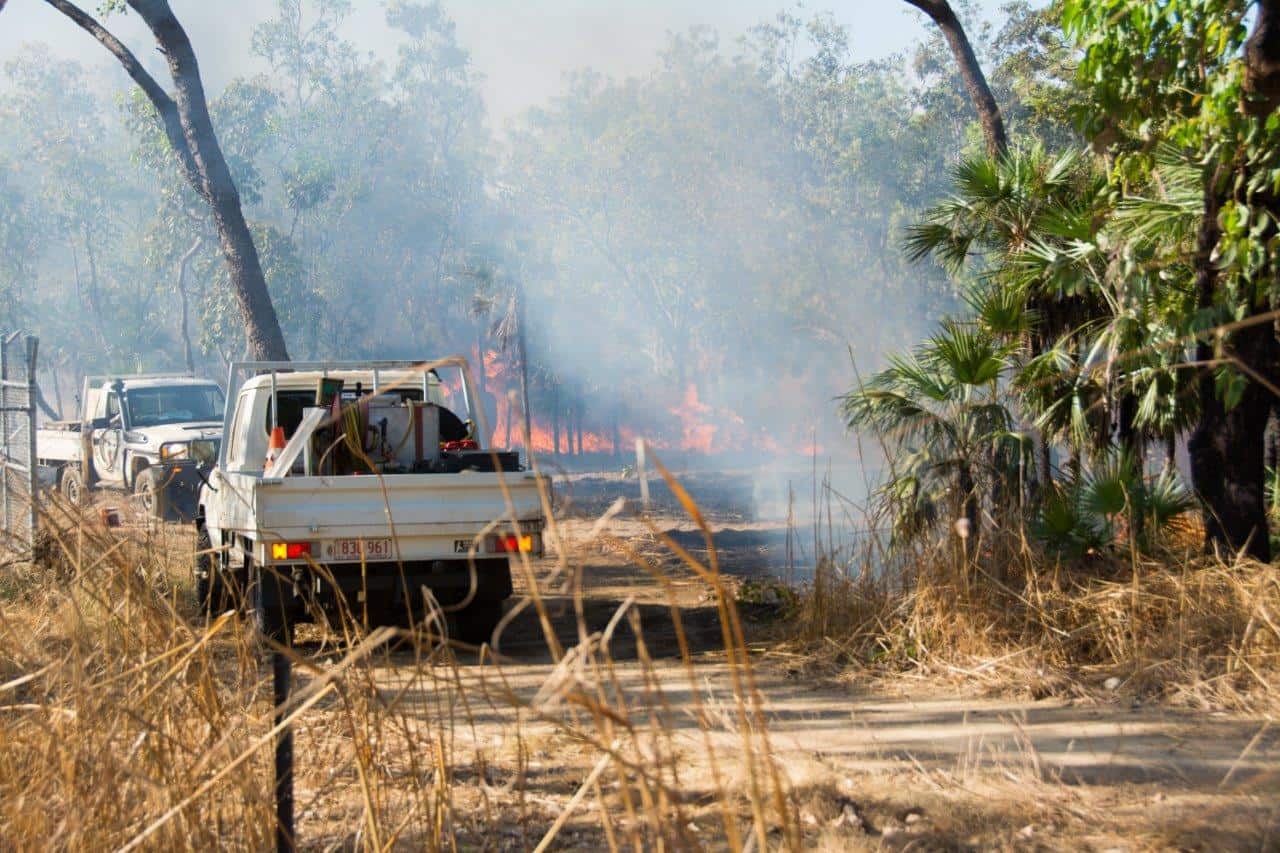 Fires near our camp at Litchfield

In the northern part of Australia, fires are intentionally started on a regular basis, early on in the dry season to reduce the fuels and chances of a big fire.

As the sun set on our camp site at Florence Falls in Litchfield National Park on our 3 month trip up north, I commented to Sarah that I could see a fire way in the distance; occasionally flames and a big, red glow.

We looked at the wind, watched it for a couple of hours and hit the sack, comfortable that the wind was blowing the other way and the rangers would wake us if it all went pear shaped.

The next morning, we drove into Darwin and spent most of the day there for Sarah’s 12 week scan, noting a huge number of fires burning (the day after Territory day where lots of fireworks are set off.

I bet several are caused by them!). Pulling into Litchfield National Park, we could see a heap of smoke, and the windy road made it impossible to see where it was coming from.

Turning into the Florence Falls Road, we came to our turn off to the old 4WD camp site, and saw it had the closed sign up. Hmm. Strange. Proceeding on anyway (as our camper was set up there!), we rolled to the bottom of the hill and to our camp site, which was the first one you’d come across. 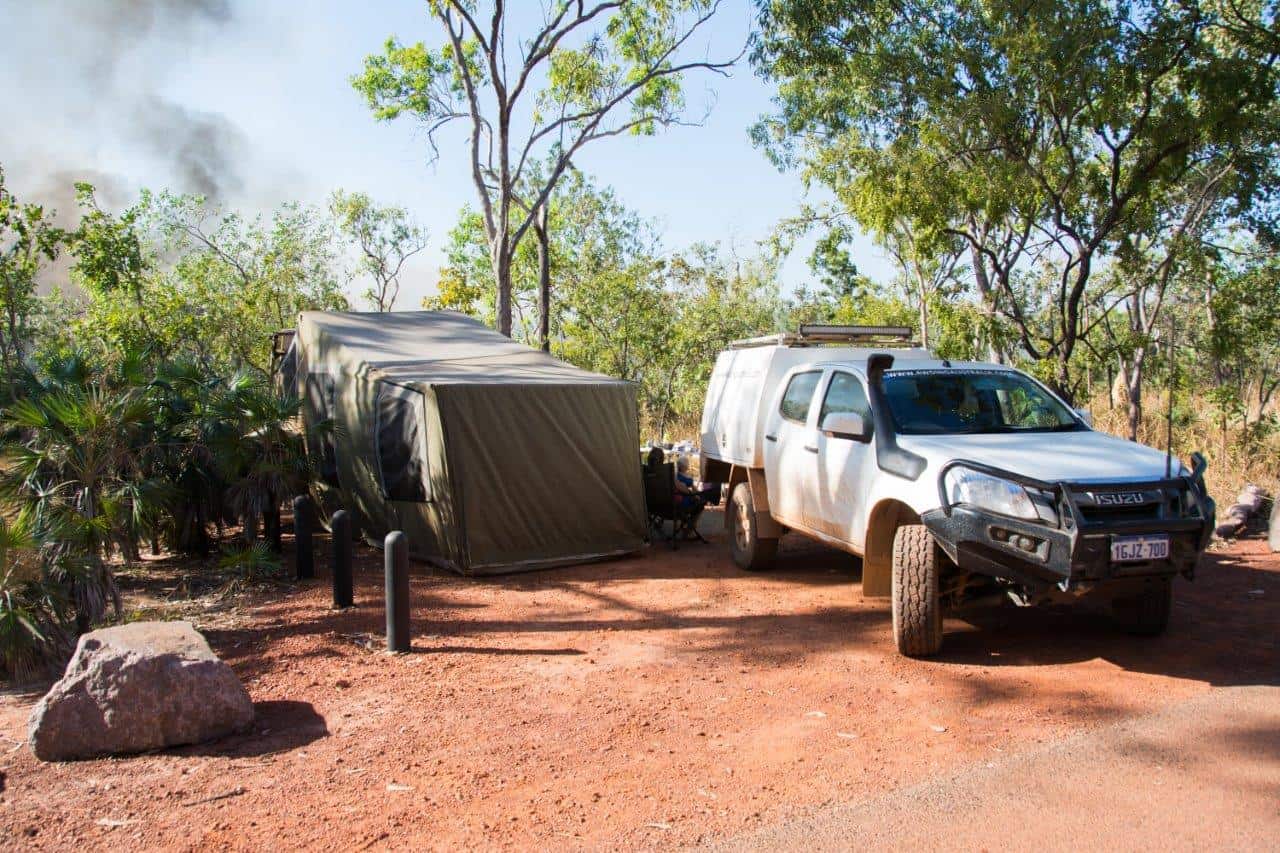 I could see there was a heap of activity going on, and about 5 rangers in vehicles all looking like they were getting ready for something. No sooner as I’d jumped out of the car, one of the rangers wandered over, and gave me a run down.

‘You’ve probably seen the smoke; we are going to back burn from here to create a barrier’. They’d run a nice fire break in with a tractor and blade roughly 50 metres away from our campsite, between the bottom of the grounds and the road only about 50 metres away from us.

He said ‘We won’t shut the camp site down, but you have to make a decision. There’s going to be a lot of smoke and ash, but you are free to stay if you want’. We were told in about 30 minutes the burn would start, and it would take about an hour to pack the soft floor camper trailer and everything up while Oliver was around.

Decisions decisions. Sarah’s an asthmatic, and we didn’t yet know how Oliver would go with smoke. I spoke to a few other campers, and had a look at the fire break. We could move out, but it would mean to a Caravan Park about 30km away, and then we’d have to drive back in later on.

The fires in the north are vastly different to what you’d see around Perth. You frequently drive past fires burning to the edge of the road, or have burn off’s done while people are around.

There’s not enough fuel on the ground to make the fire burn hot and fast like it does in Perth. If you are in Perth and a fire is coming, you get out of its way real fast, or you can easily end up dead. It consumes houses, and will burn substantially faster than you can run.

The fires up north are gentle, and although still hot, nothing compared to what you get down south. They move extremely slowly, and just burn the build up of grass and some ferns, leaving most of the bigger trees ready to keep growing.

I wasn’t overly concerned about getting burnt; they had a good fire break, 5 land cruisers ready with firefighting equipment and looked like they had a fair idea of what they were doing.

However, I wasn’t about to risk my camper trailer and the health of my family, so we started to pack away, at least to a point where we could move if we had to.

Only a few minutes past and I saw them lighting the bush up. I watched to see how it would go, and a neighbour suggested going for a walk down to the bottom, saying they had it all under control (although unconvincingly he had moved his camper and car!). 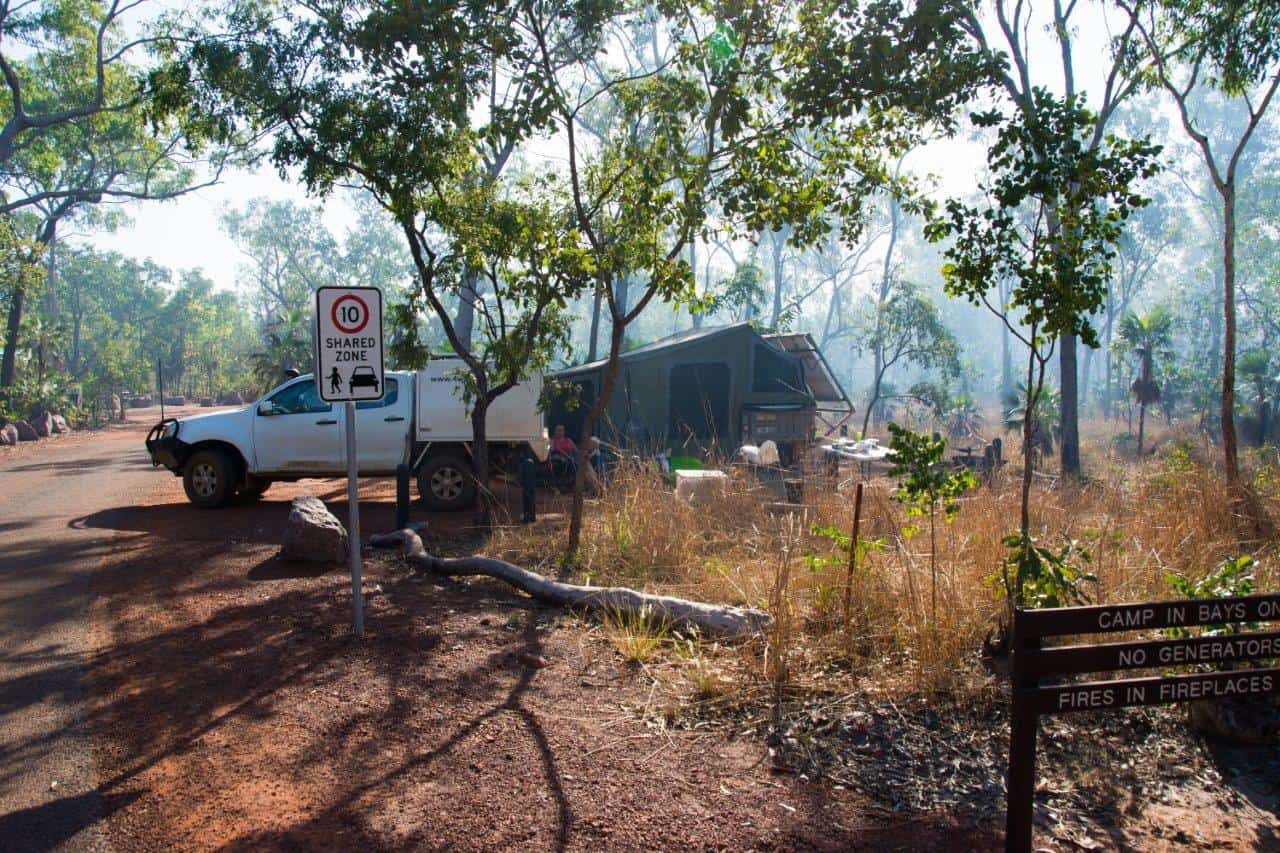 Lots of smoke around our camp

A quick walk down to the bottom of the camp site put my mind at ease. These guys were pro’s, and knew exactly what they were doing.

There were multiple vehicles patrolling, spraying down areas that they didn’t want to burn and were all talking via UHF’s. About an hour later and the fire had pretty much burnt to the road where we were camping, along the far side of the fire break. 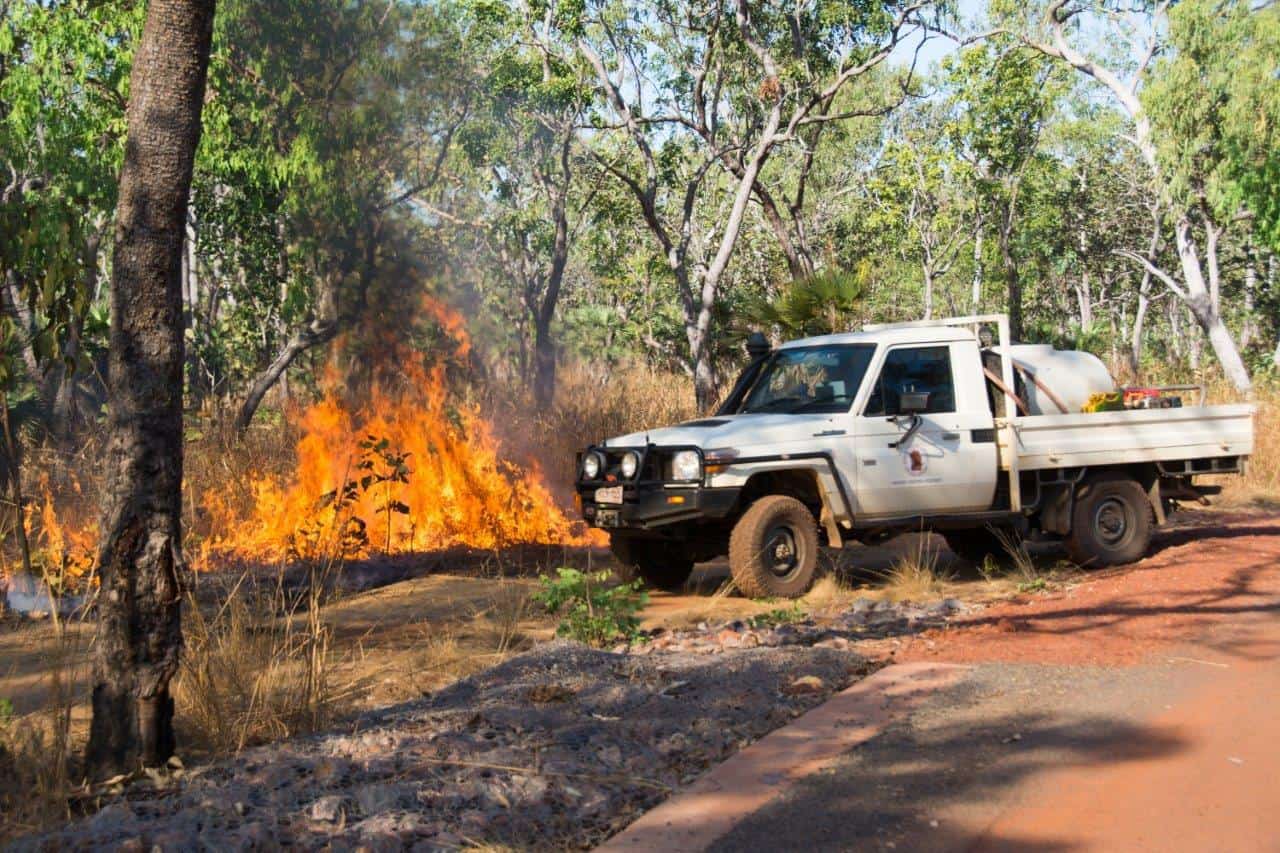 The rangers at Litchfield are incredibly good at what they do

We’d decided to stay put, as the smoke wasn’t too bad, the embers certainly weren’t a problem and it was a bit of adventure. We unpacked again, and I got back to repairing the broken tray mount on the Isuzu Dmax. 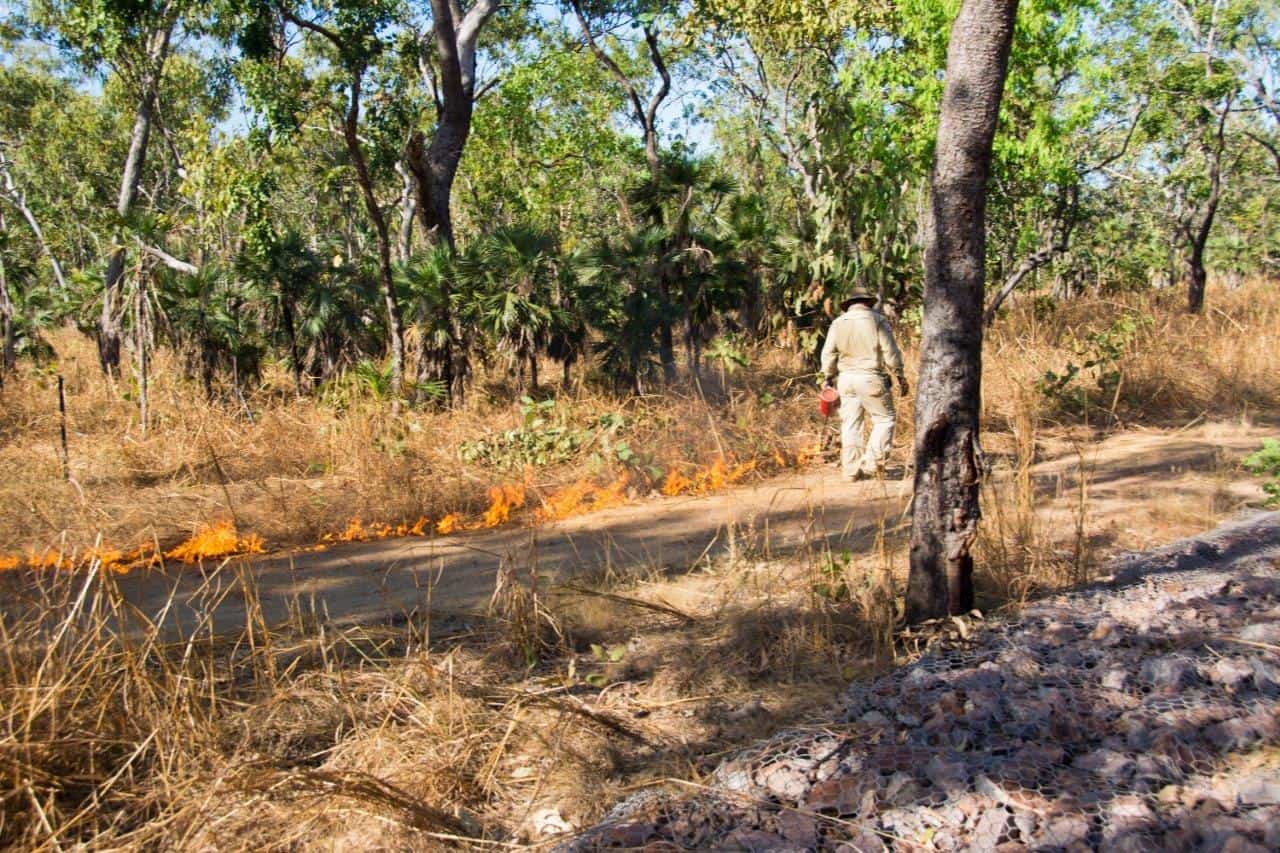 The fire bug lighting it all up with the rangers

Fun and games, and certainly a great experience. I took a number of photos that night, which was absolutely beautiful. I don’t reckon the fire was burning at more than about 150 metres an hour, which is super slow. 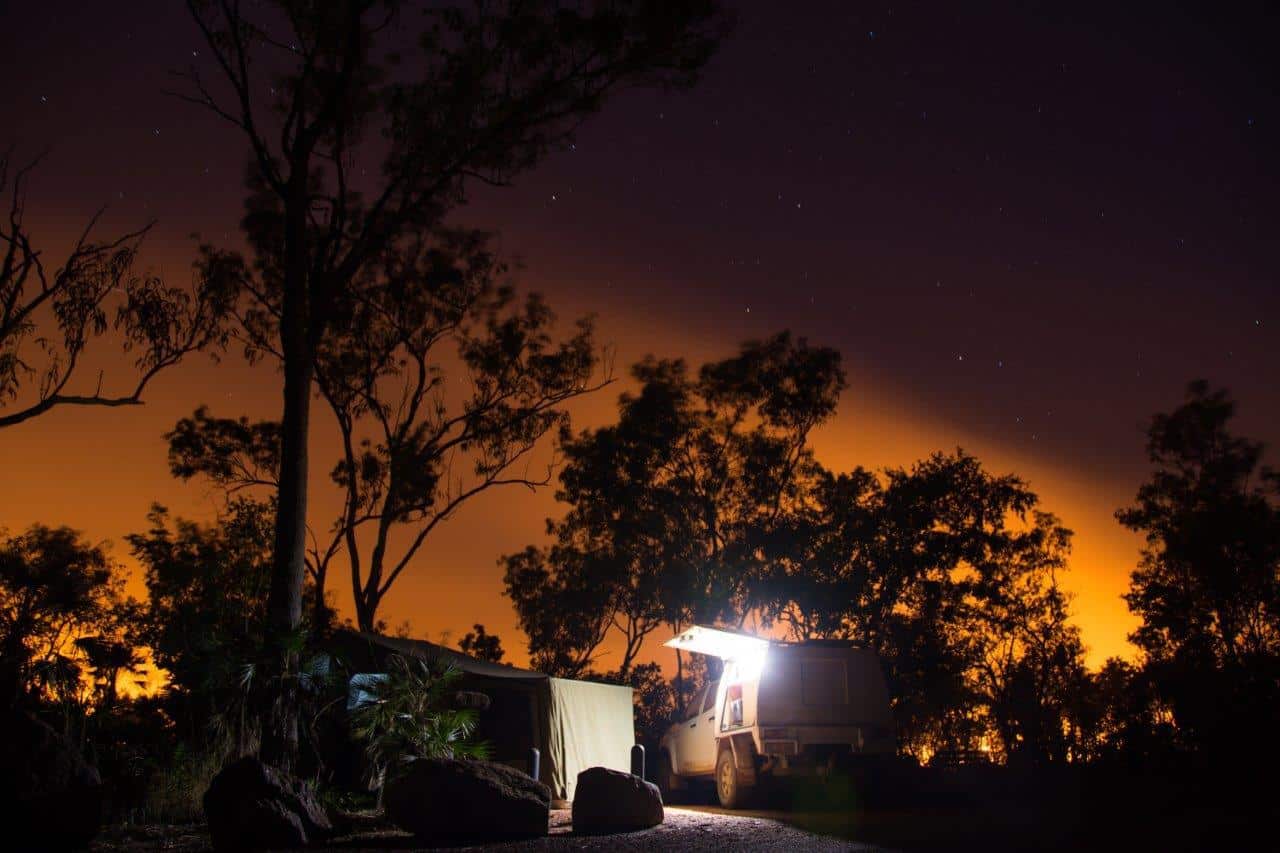 A truly unbelievable sunset and evening

A huge credit to the rangers at Litchfield; you guys do an awesome job, and we were glad for your hard efforts.