Crocodile safety in the Kimberley and Northern Territory

Having grown up in Perth, where the only place you’d see a crocodile is at the zoo, it was very interesting to head to the Kimberley in 2015, and then the Northern Territory and Kimberley in 2018.

Heading up on the first trip, I had very little idea about Crocodile safety, and was a little on the cautious side. However, I’ve since picked up a heap of information that you might find interesting.

For starters, the most common people to get killed in Australia by crocodiles are males, and often locals to the area (I’m not referring to indigenous people either).

Males tend to be less cautious, and locals often get far too complacent. Despite signs at Koolpin gorge clearly stating not to go near the waters edge of one of the pools, we saw a couple of locals getting water from it, fully aware of the information shared around. Your life, your decision. Personally, I don’t think its worth the risk. 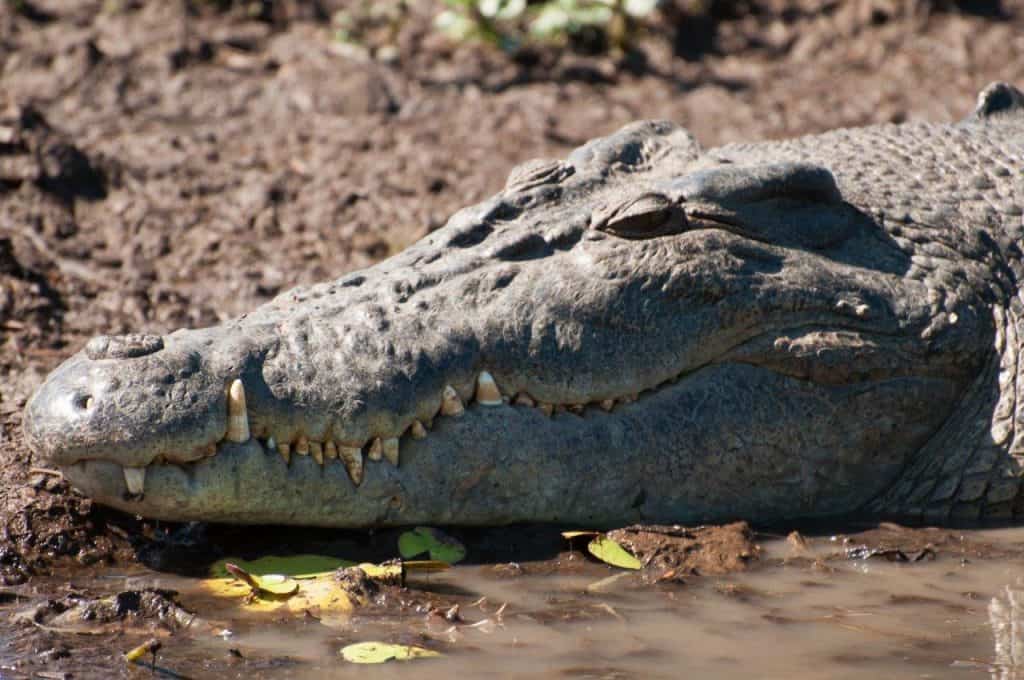 Things you need to know about crocodiles

There are two types of crocs in Australia; fresh water ones (which are much smaller and have a thinner head) and estuarine crocs, or salt water crocs (which can grow to about 6 metres long, and will happily eat you at any time of the day).

Now, when I say fresh water crocs are harmless, I mean that they will leave you alone, as long as you do the same to them.

You can safely swim in water bodies with fresh water crocodiles (Lake Argyle has 25,000 of them and people swim in it every day), but if you annoy or upset them, they will not be harmless in any sense of the word. 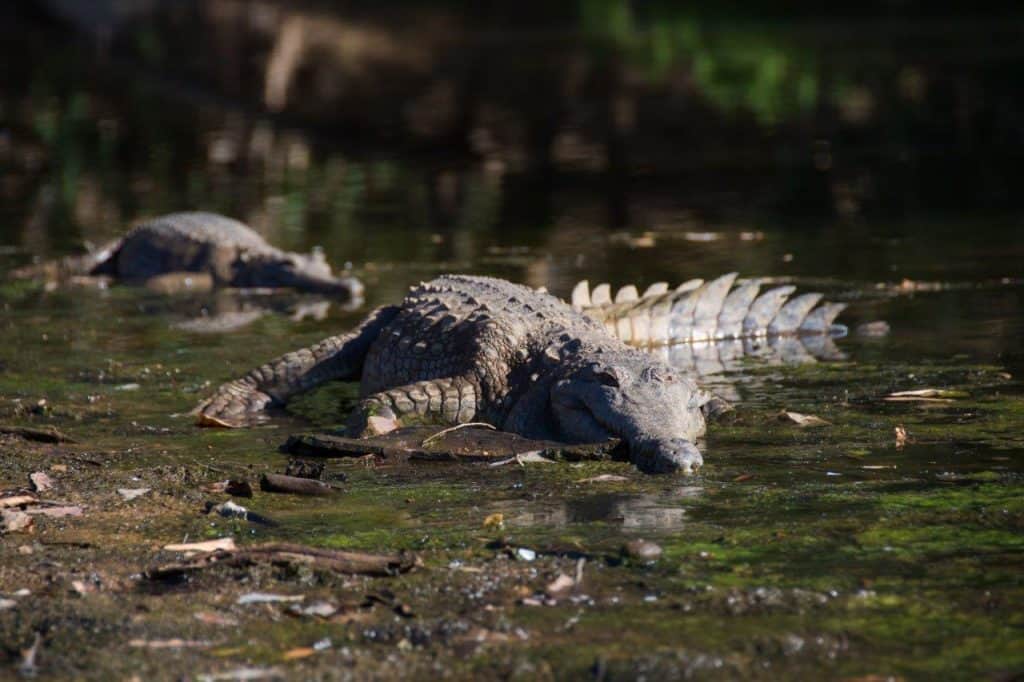 A couple of fresh water crocodiles at Windjana Gorge

There have been a few people attacked by fresh water crocodiles, usually because they have gotten too close, or stood on them, or done something stupid. They still have lots of sharp teeth, and have the potential to do a lot of damage, and even kill you.

Salt water crocodiles can be anywhere, including fresh water bodies

The term salt water crocodiles is very misleading. They are often found in salt water, but are found in fresh water bodies on a very regular basis as well. When the wet season hits, and lots of rain falls, crocodiles often move long distances, and can be found very far inland.

Don’t assume that because its a fresh body of water there are only going to be fresh water crocodiles, or it might be your last decision. 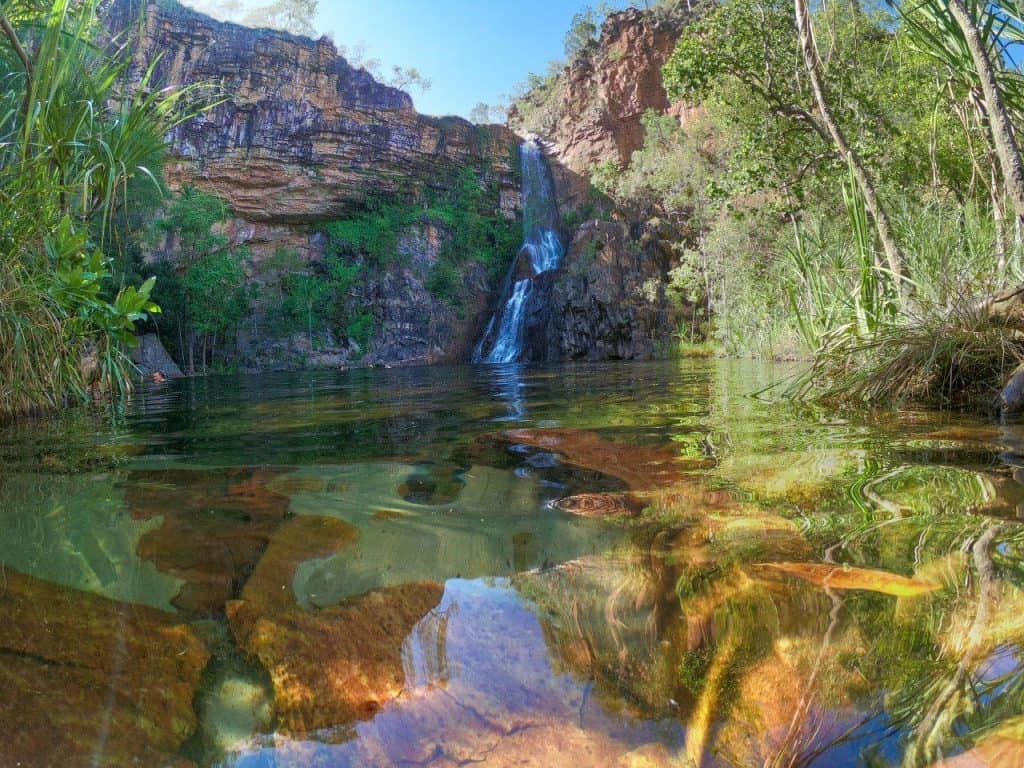 I do a lot of spearfishing, and have had a few encounters with reasonable sized sharks. A lot of people tell me I’m mad for being in the water with a shark, but the truth is, they are often relatively safe to swim with.

They will also sit underwater for hours, waiting for the precise moment you get too close, and then lunge out at speed that is impossible to react to.

On the Yellow Water Cruise in Kakadu, we were told that when swimming in the ocean with sharks there is a risk of being attacked, which we all know. However, he said swimming in an area where a salt water crocodile lives though there’s no risk; its an absolute certainty that you will be attacked if you are in the water for long enough.

We spent a few hours fishing at Lorella Springs Station, and watched a salt water crocodile slowly work his way down towards us, and a big fish sitting on the banks of the river just at the bottom of the cliffs we were fishing at.

We lost him for the last hour or so of fishing, and eventually packed away. Not more than 5 minutes after we’d finished packing away, and I stuck my head over the cliff to see him up on the bank, eating the fish.

They will wait until you can’t see them, and then pounce. Lorella Springs Crocodiles are common, and they even have a couple in an enclosure at the main homestead.

Salt water crocodiles have killed a lot of people in Australia, including the Kimberley and Kakadu National Park. 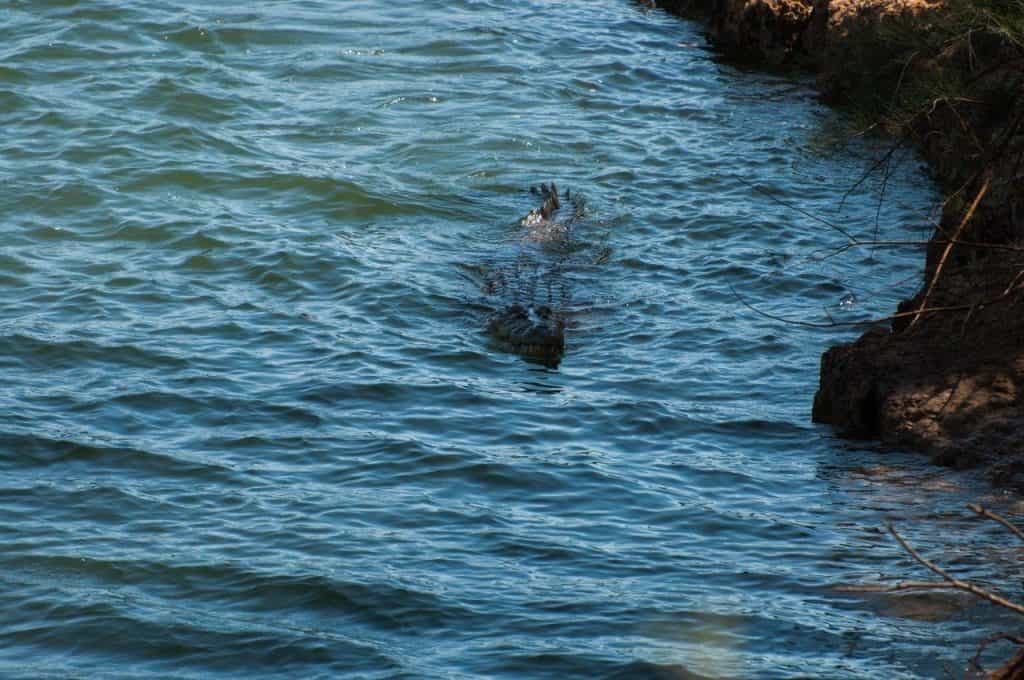 Berry Springs and Mataranka Springs regularly have salt water crocodiles removed, and crocodile traps are often left in place to mitigate the chances of one entering and interacting with people. 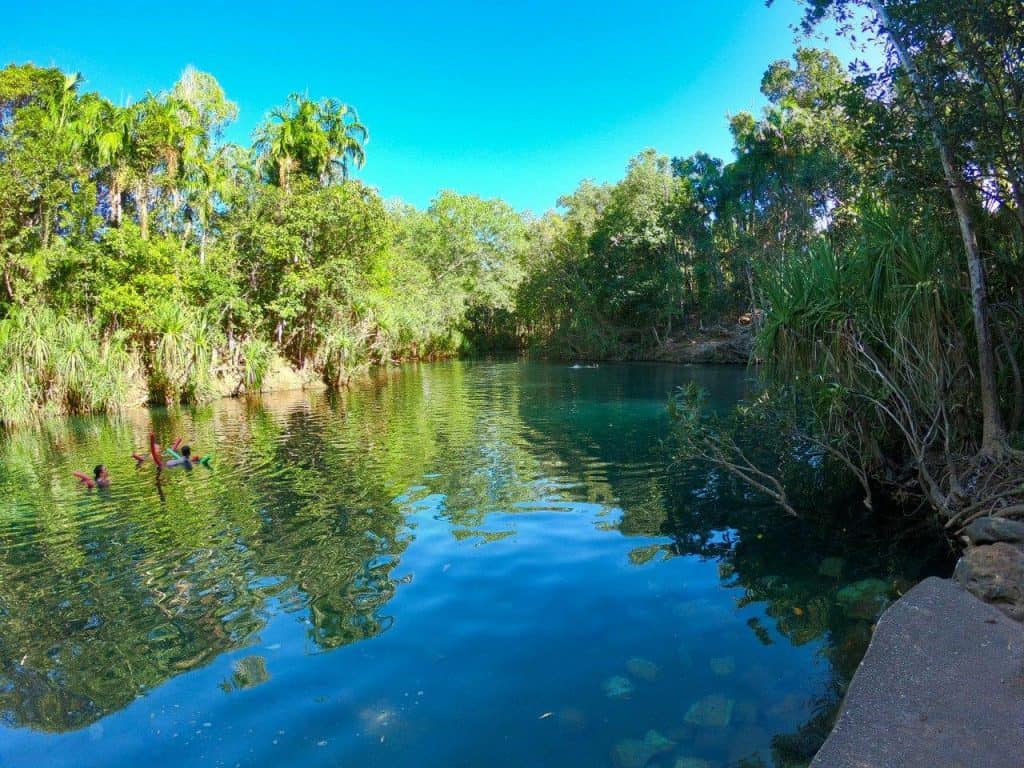 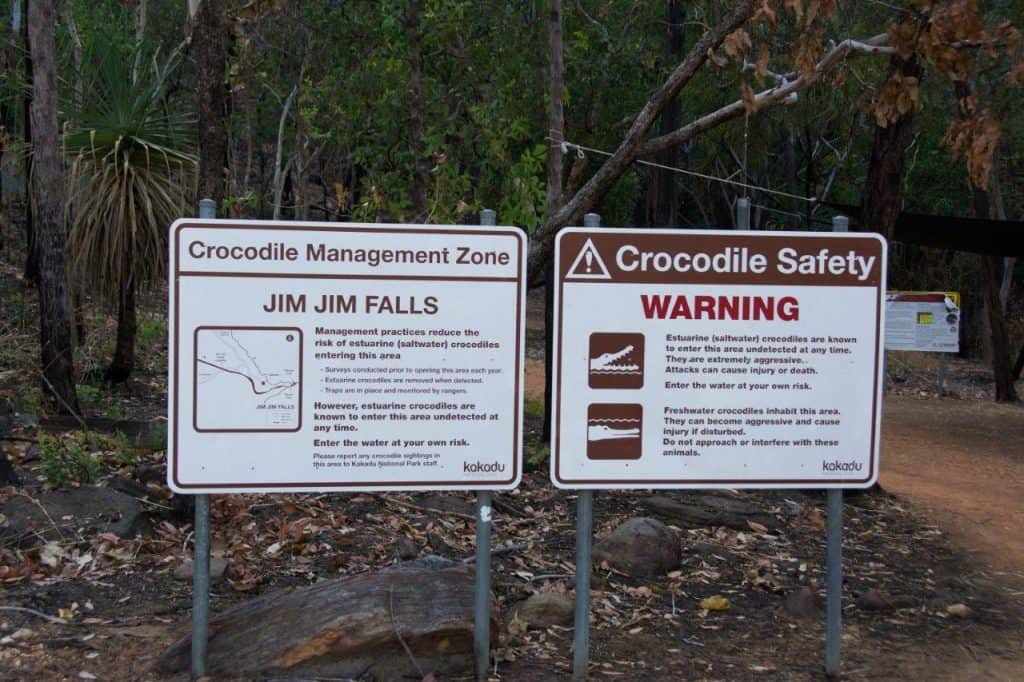 The risk is up to you

How far should you be from the waters edge?

The crocodile safe marketing campaign in the northern part of Australia suggests 5 metres away from any water body. A big crocodile can move 5 metres in a split second, and I bet you can’t.

The biologists at Crocodylus recommend 25 metres away from the water source, and never go to the same spot on the bank more than once. 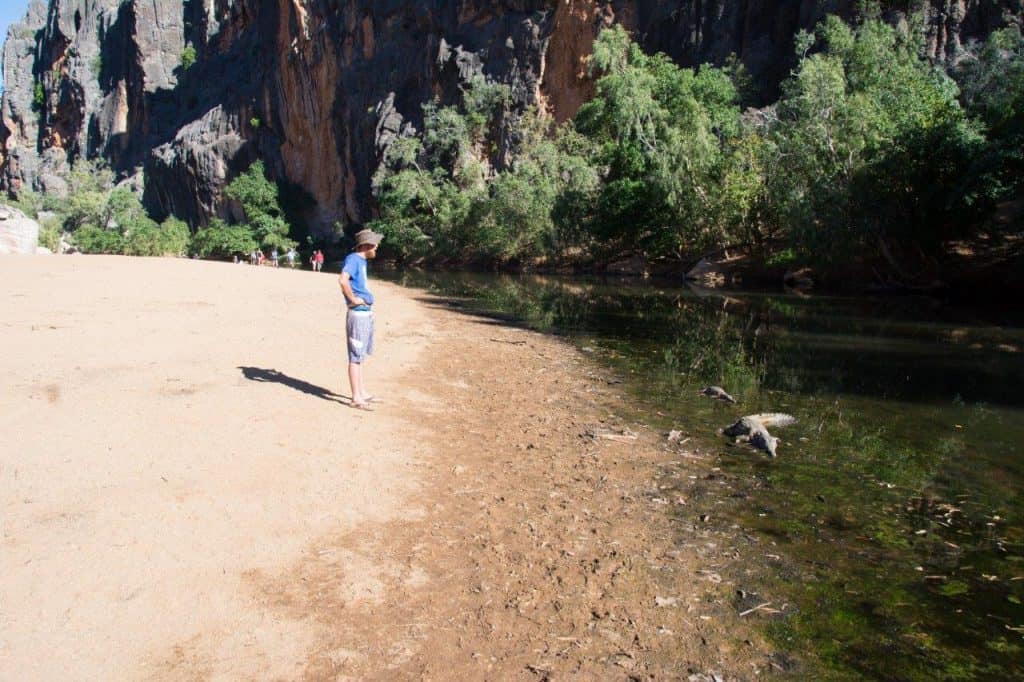 Stay well back from the waters edge. This is at Windjana, with the fresh water crocodiles 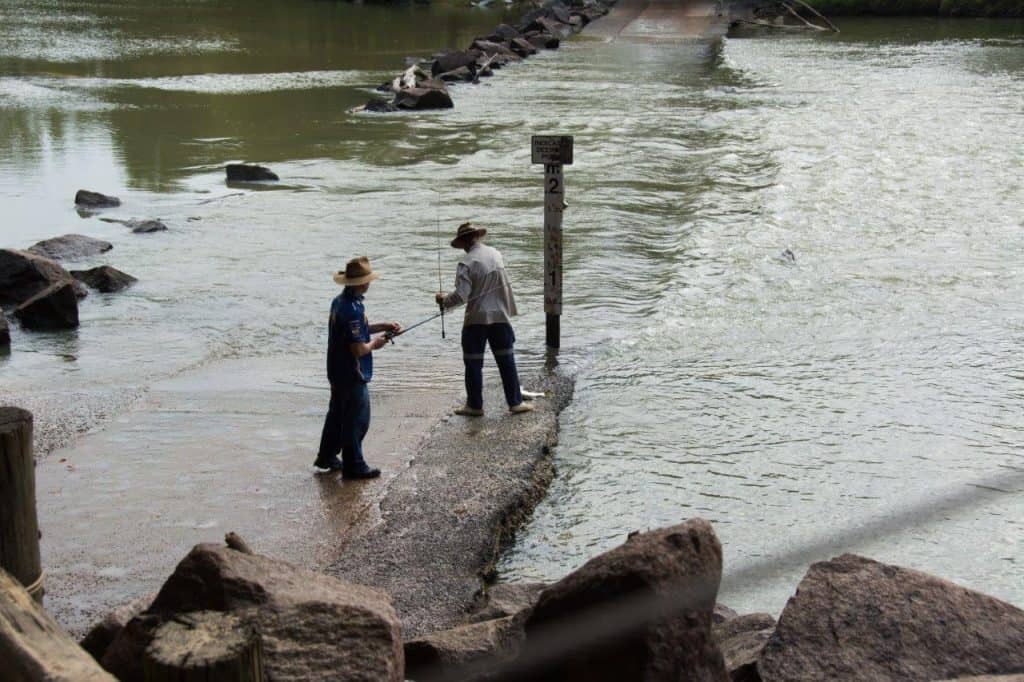 If the water is clear and shallow, its safer

This is true. If you can see the bottom of the water clearly, and its nice and shallow, the chances of getting in contact with a salt water crocodile are much reduced. We swam at Hunter creek, under the guidance of a local aboriginal, only because of this reason.

Still, the safest thing is not to go near bodies of water where crocodiles can be. 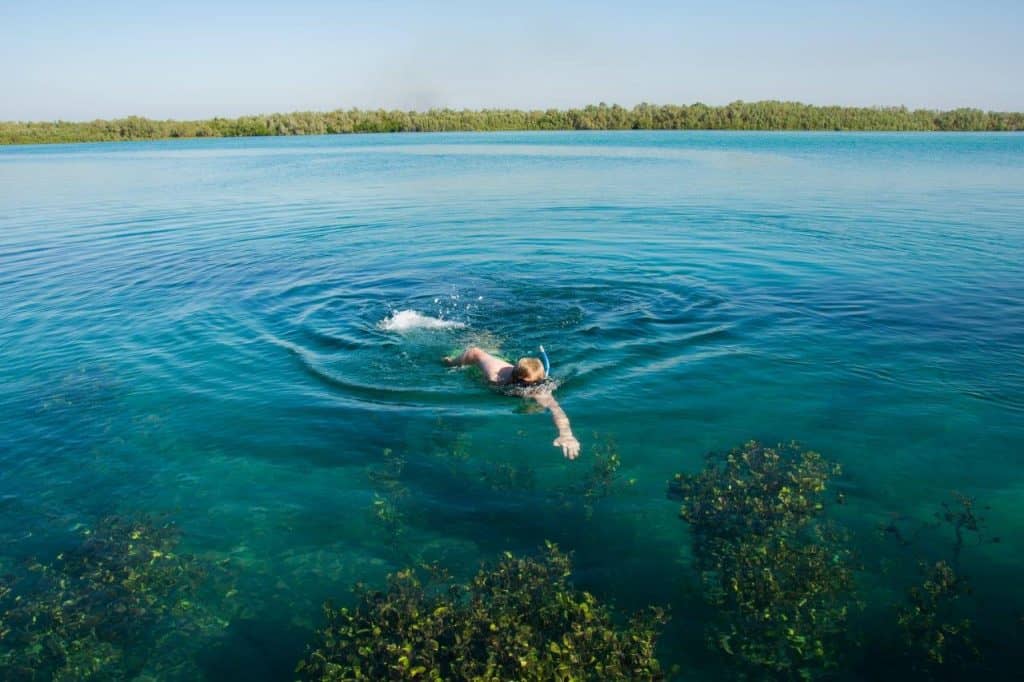 Swimming at Hunter Creek under direct instructions from a local aboriginal

Swim at your own risk

At the end of the day, every time you enter the water in crocodile country, its swim at your own risk. In Kakadu National Park, they have crocodile management policies, and suggest you don’t swim, but a lot of people do in the places where the risk of a salty is extremely low.

That said, no ones going to give the all clear for a water hole when a crocodile could move in overnight. No one wants to take on the risk these days, and so its ‘swim at your own risk’. 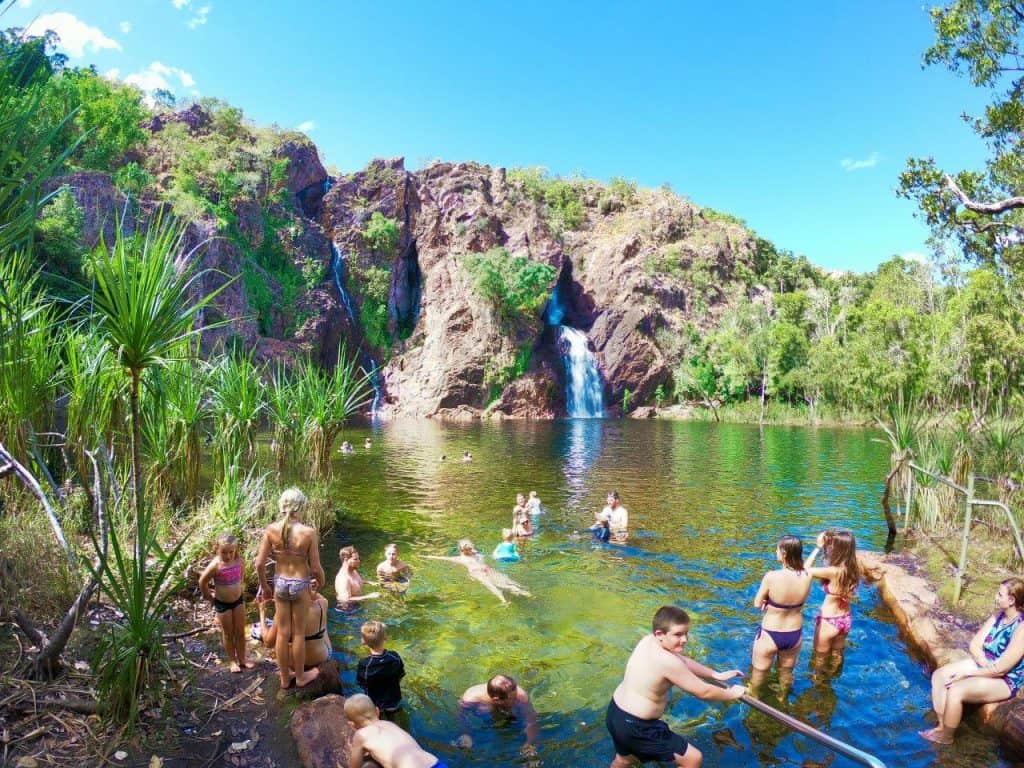 If there’s been lots of people swimming for days on end, the risks are very slim

No signs doesn’t mean its safe

There are a lot of signs in the Kimberley and Northern Territory telling you not to swim at certain water holes. Just because you come across a water hole that has no signs, doesn’t mean its safe! 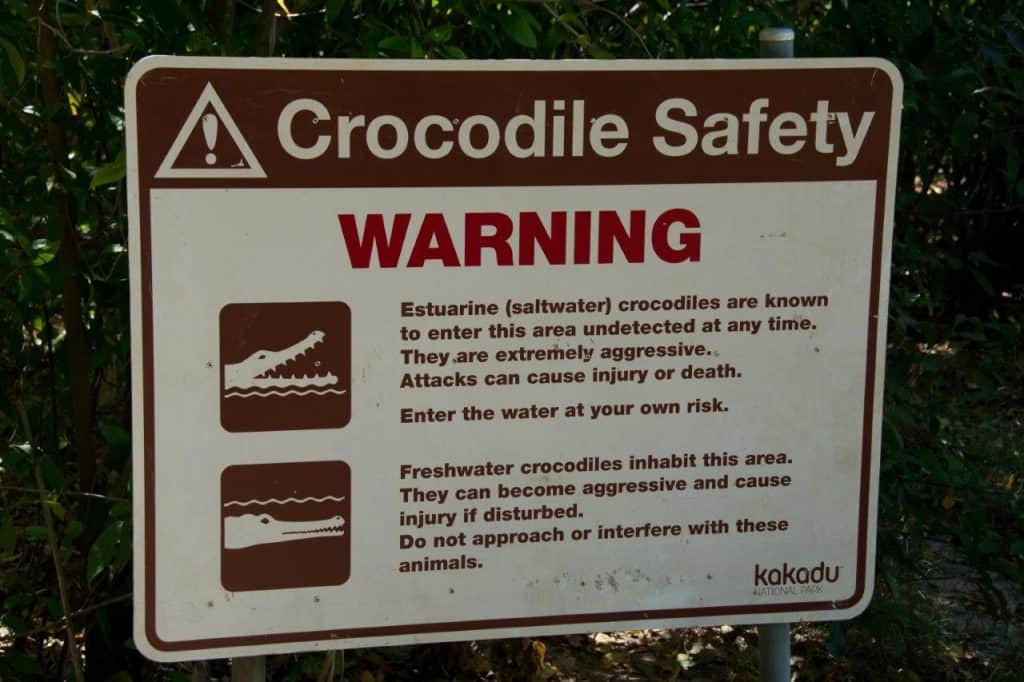 These signs can’t be put everywhere; just because you can’t see signs doesn’t mean its safe

Where can you find Salt Water Crocodiles?

In general, you will only find Salt Water crocodiles north of Broome, and Gladstone. However, there have been plenty of reports of them being further south, and every year they seem to push the territory.

You’d never expect to see them in Port Hedland or Karratha, but they have been seen there, and that’s a pretty scary thought. Be aware that anywhere north of Karratha, or Sunshine coast there is a very slim chance you will see one. The further you head north, the more likely it is.

I found it very interesting to watch how people reacted to the signs and information in Kakadu National Park. The whole Northern Territory does a pretty good job at warning people of the risks, but in the end, they lay the risk back on your shoulders.

The signs in Kakadu say this is a crocodile management zone, and everything is done to keep them out, but there is a chance they will enter at any time, and you must swim at your own risk.

Standing at Maguk Gorge, looking at the beautiful, crystal clear water and stunning fish swimming around, I’m reminded of the words.

We were considering having a swim, but eventually decided it wasn’t worth it. Yep, the chances of one making its way up the stream are pretty low, but it does happen from time to time, and is it really worth the risk?

That’s your call to make, in every situation. Some people did swim, and it looked amazing, but I don’t reckon there’d be many worse ways to die, and help is a long way away in most of the Northern Territory.

Jim Jim Falls had an interesting arrangement – at the bottom of the falls is a huge pool, and then a smaller one just beyond, and then only tiny creeks feeding a wider section, like a river. Now, once the water dries up, there’s no way a big crocodile is going to make it from the river section up and over all the rocky section and into either of the pools, so what’s the chances of getting attacked?

Pretty much nothing, I’d have thought, unless one somehow comes over the top of the falls, in which case it would be in bad shape. Is it safe enough then? That’s your call to make. 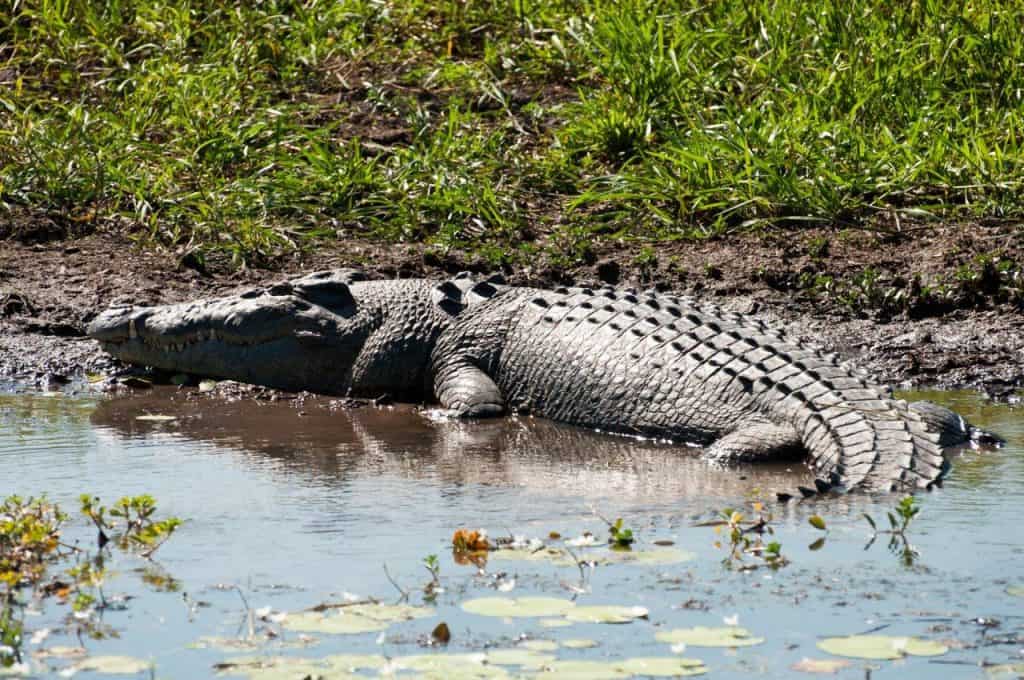 I wouldn’t want to be anywhere near this bloke

While in Kakadu, I read a comment from someone which caused me to look into deaths in Kakadu National Park in previous years from Salt water crocodiles, and what I read really sunk in hard.

We spent 4 nights camping at Sandy Billabong camp site, which is a lovely campsite away from the crowds, next to a beautiful big billabong. I was always careful not to go too close to the water, for fear of salt water crocodiles, and this turned out to be a very wise decision, given the reports I’ve since read.

In 2002, a small tour group camped at Sandy Billabong, and the tour guide told a group of tourists that it was OK to go for a swim in the Billabong, as he’d seen evidence of aboriginal woman taking mussels to eat. A group of them went for a swim at 9PM at night, and a 29 year old German tourist was taken by a big crocodile.

They were in the water for 10 minutes, and felt something move next to them, and then the 29 year old was pulled under the water, never to be seen again. After getting out, they shone a torch around and could see the eyes of a giant crocodile staring at them in the distance. 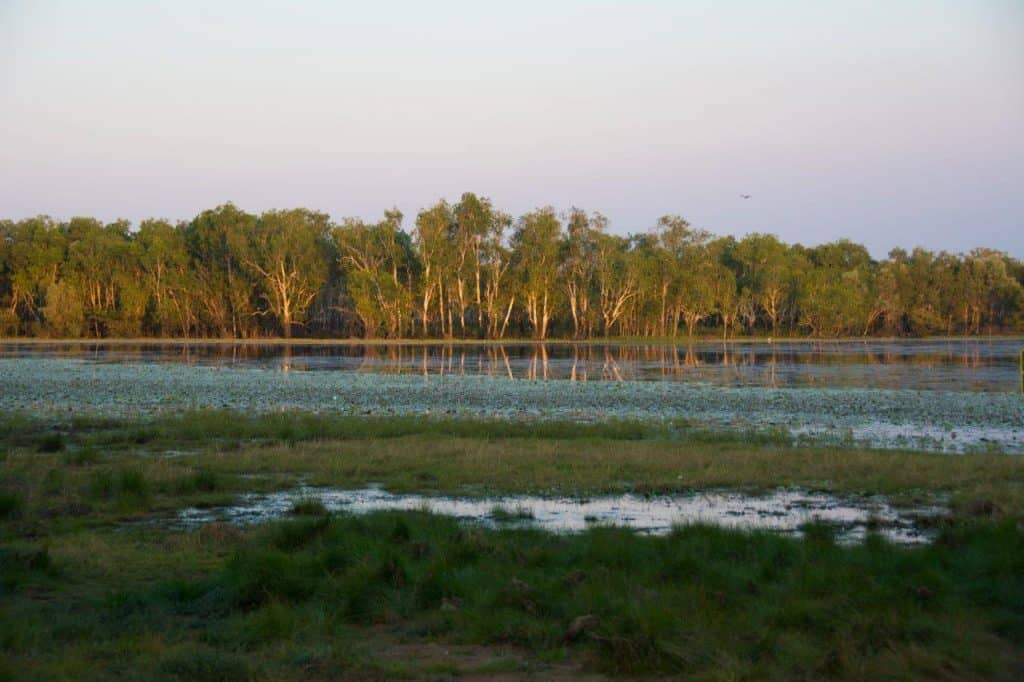 As with all crocodile deaths in the Northern Territory, when someone is killed, the authorities come in and kill all potential crocodiles until they find the body.

They got the one that killed this tourist, and it was a huge 4.6 metres long. You’d have no chance with an animal that size, and they are super aggressive and territorial at that age.

Next time you have to make a decision; is it worth the risk? That’s your call; think long and hard about it, as you probably won’t get a second chance.