We’d heard people rave about the Kennedy Ranges for many years, and had wanted to check them out earlier but never seemed to be able to slot them into our trips away. On our recent 3 week trip to the Pilbara, we spent a few nights at Mt Augustus and then Temple Gorge in the Kennedy Ranges, and really enjoyed it.

From the moment we first saw the ranges I knew we’d be in for some fun, and I wasn’t wrong. Mt Augustus is pretty amazing from a sheer size perspective, but the Kennedy Ranges have a lot more interesting detail, and in our opinion are far more picturesque. That’s not to detract from Mt Augustus (which we also really enjoyed), but just giving our thoughts and opinion! 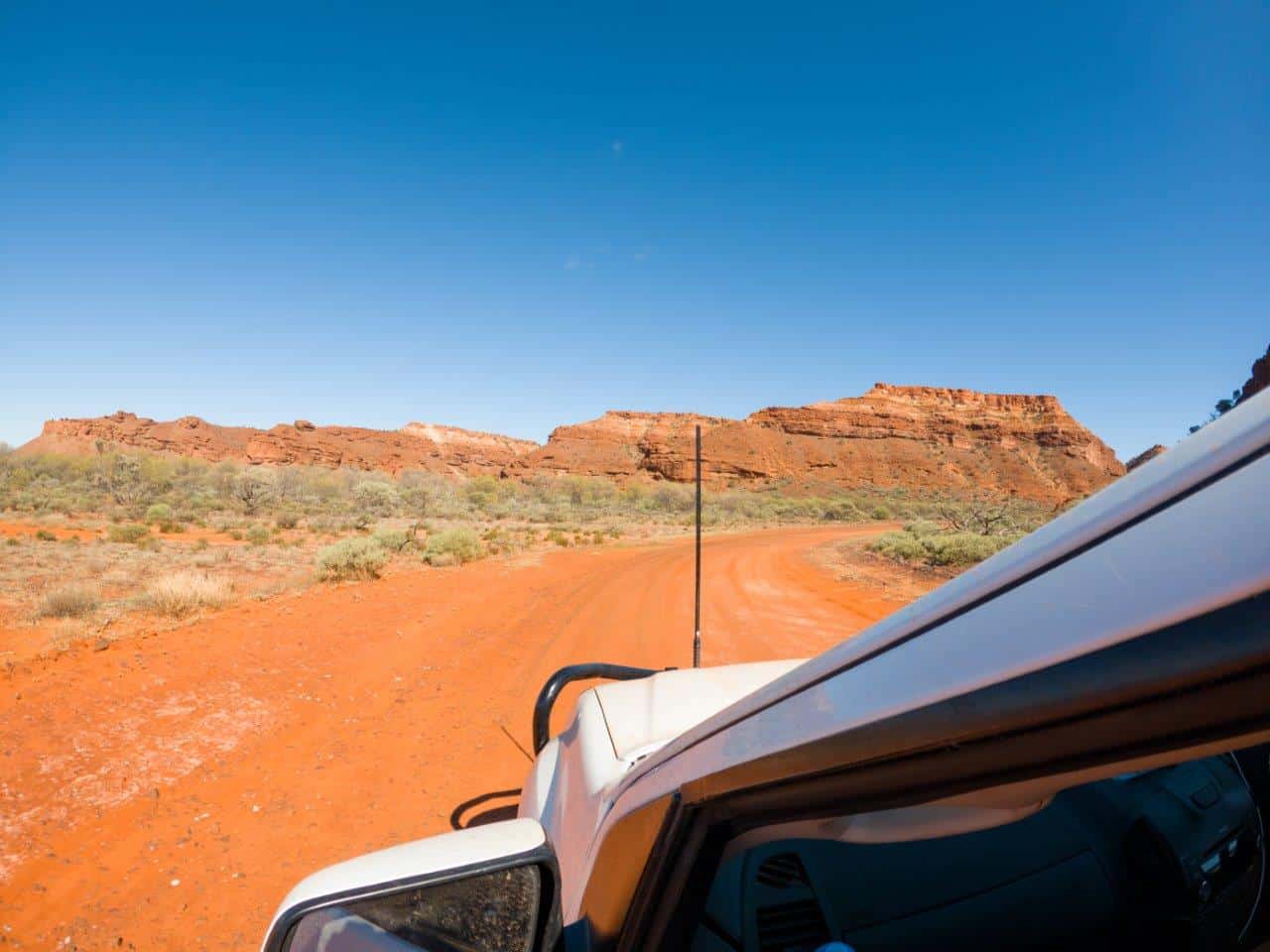 Driving into the Kennedy Ranges 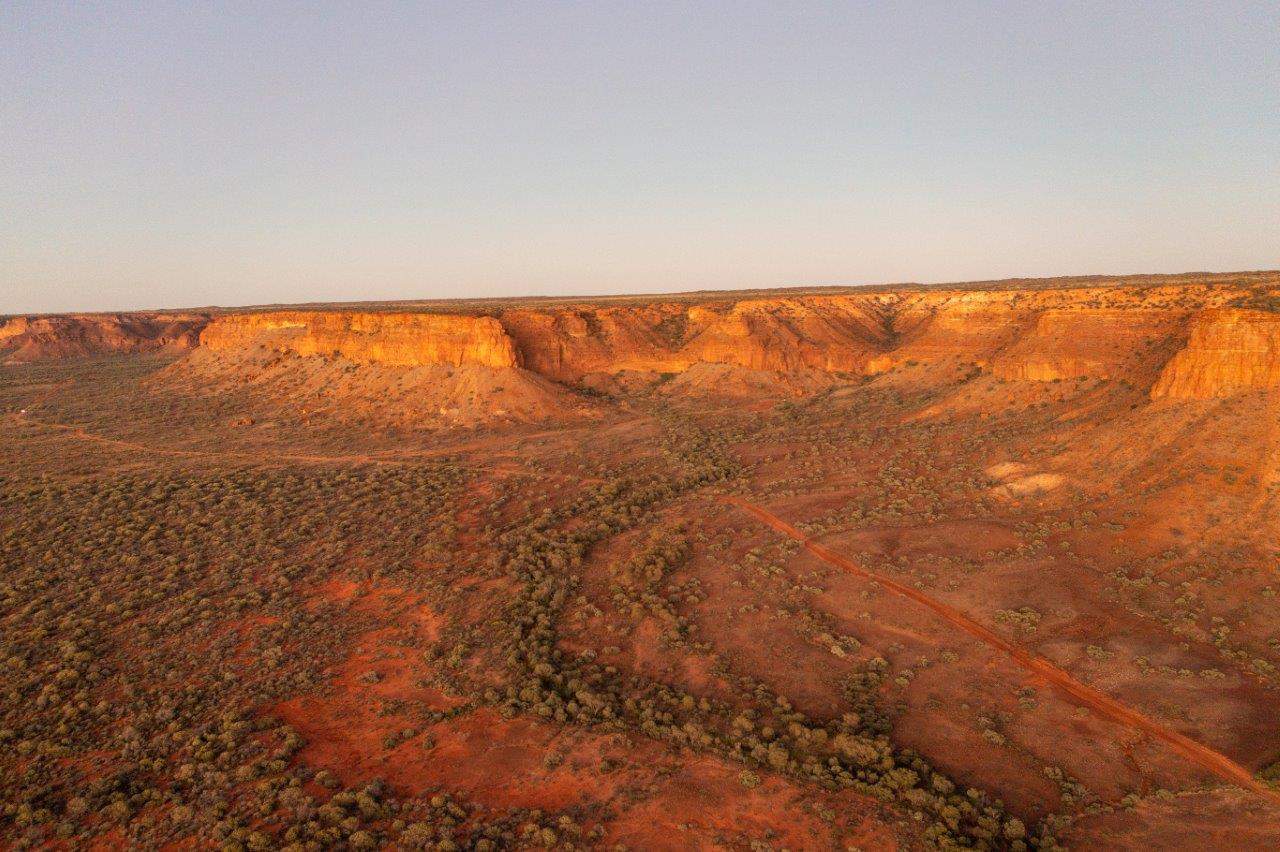 Sunrise at the Kennedy Ranges

Where are the Kennedy Ranges?

Mount Augustus is around 265km North East via Cobra, and Google says about 4 hours, but we probably did it in just over 3.

If you want to come from the East, you’ll head in via Meekatharra, which is 510km, and somewhere between 6 and 8 hours. 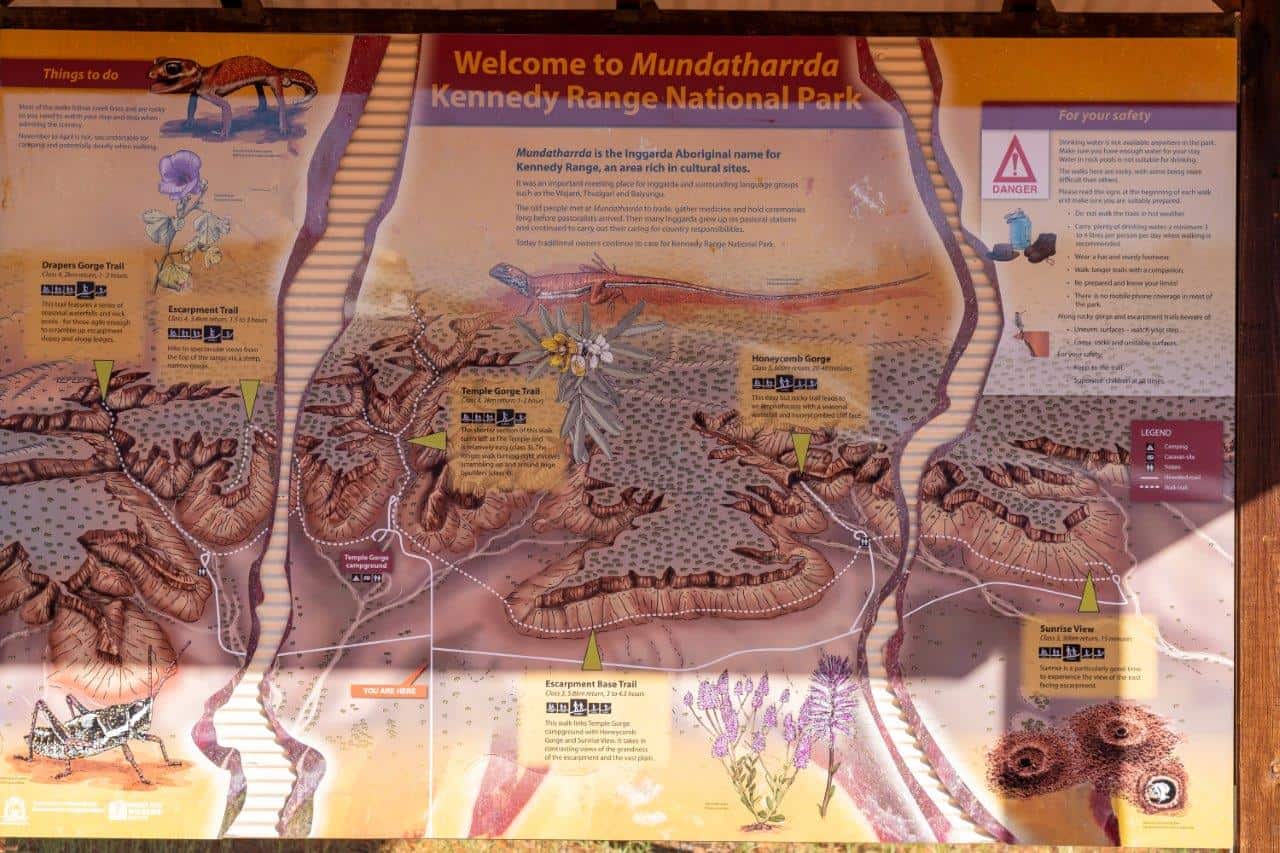 The Kennedy Ranges are far more accessible than Mt Augustus, and its mainly bitumen from Carnarvon. North of the Gascoyne Junction it turns to gravel, which is generally in good condition and is suitable for 2WD’s.

If you come from the north, around Cobra and Mt Augustus, the road is entirely gravel and also generally well kept (although if it hasn’t been graded for a while it can still be rough).

We sat on 90km/h for most of the drive from Mt Augustus to the Kennedy Ranges, and were really impressed with the roads. I can’t say the same for the road from Ashburton downs to Mt Augustus, which was much slower and had a lot of nasty dips. That road was certainly not suitable for a 2WD when we went through, although they say it usually is, so maybe we copped it at its worst. 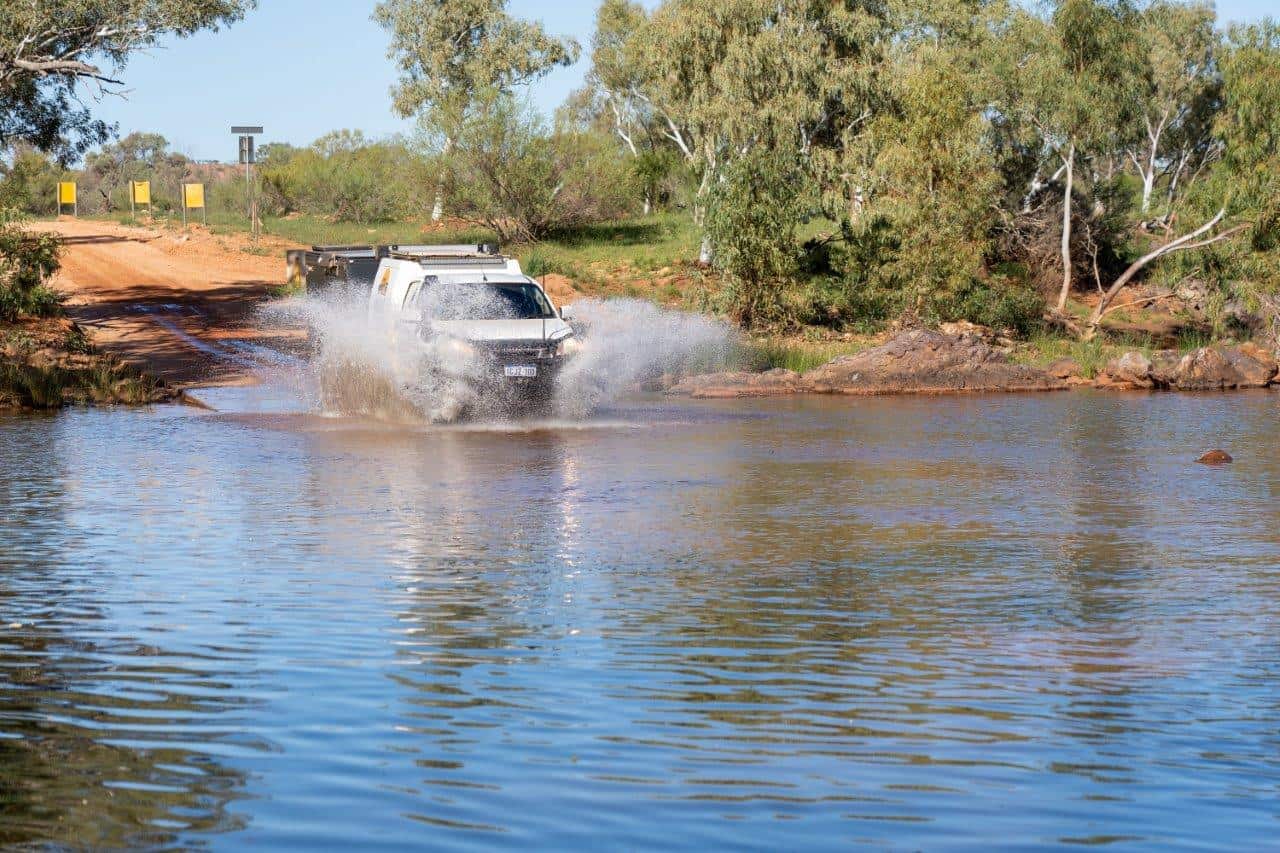 In terms of tyre pressures, we generally reduce around 20 – 30% of our normal road pressures for rough gravel roads, and have had great success with this. In fact, we got our first tread puncture rolling into Temple Gorge, and had we have had our tyres up higher it would have been even more likely. A quick puncture repair and we were sorted. 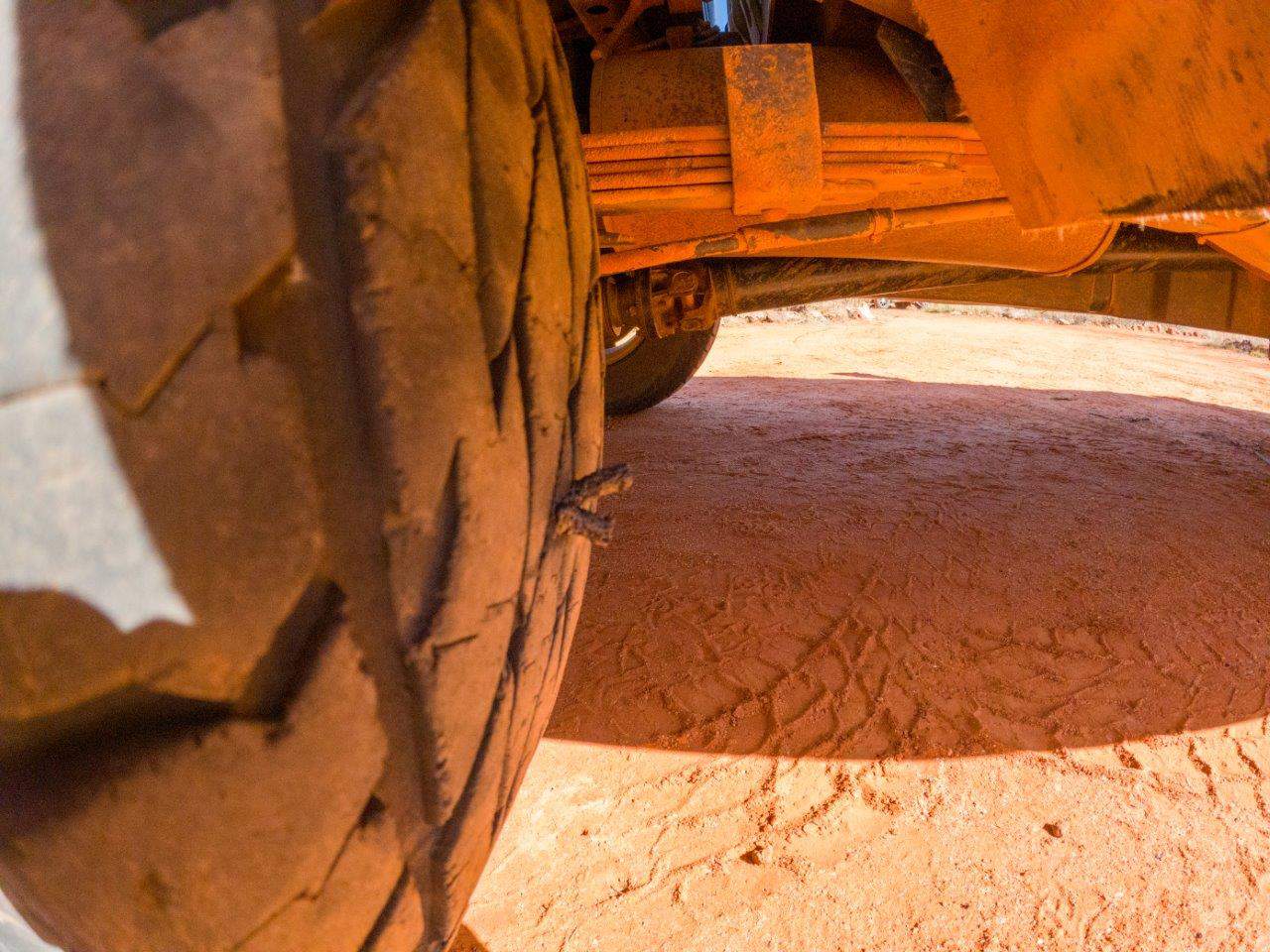 We did get a puncture not far out of Temple Gorge

Where can you stay?

There’s no accommodation options at the Kennedy Ranges, so be prepared to day trip or camp the night. In terms of camping, the only spot is at Temple Gorge, or at the Lyons River crossing down the road. Mangaroon Creek is another camp ground further north, or you can stay at a Caravan Park at Gascoyne Junction. 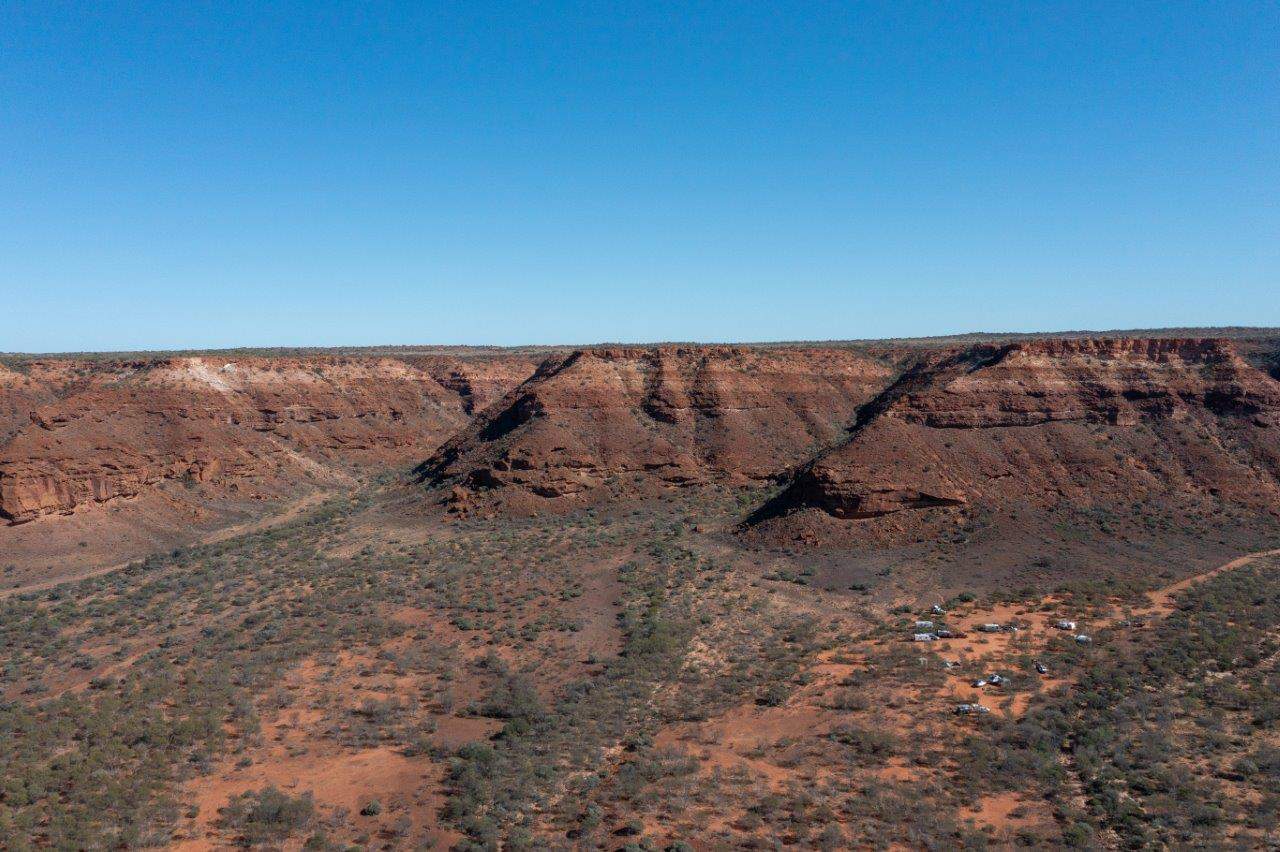 We really enjoyed our stay at Temple Gorge. There’s not a huge number of camp sites, and its very old school in terms of a National Park camp ground, but its got great views and you can do a couple of walks straight from camp, which is nice.

You have access to one toilet (and a day use one), the camp fees are reasonable and we had an awesome caretaker when we visited. You can’t book this, and it fills up fairly quickly, so don’t arrive too late in the day expecting spots to be available.

A lot of the sites are big enough for a full size van, with some only suiting single vehicles, or smaller camper trailers. 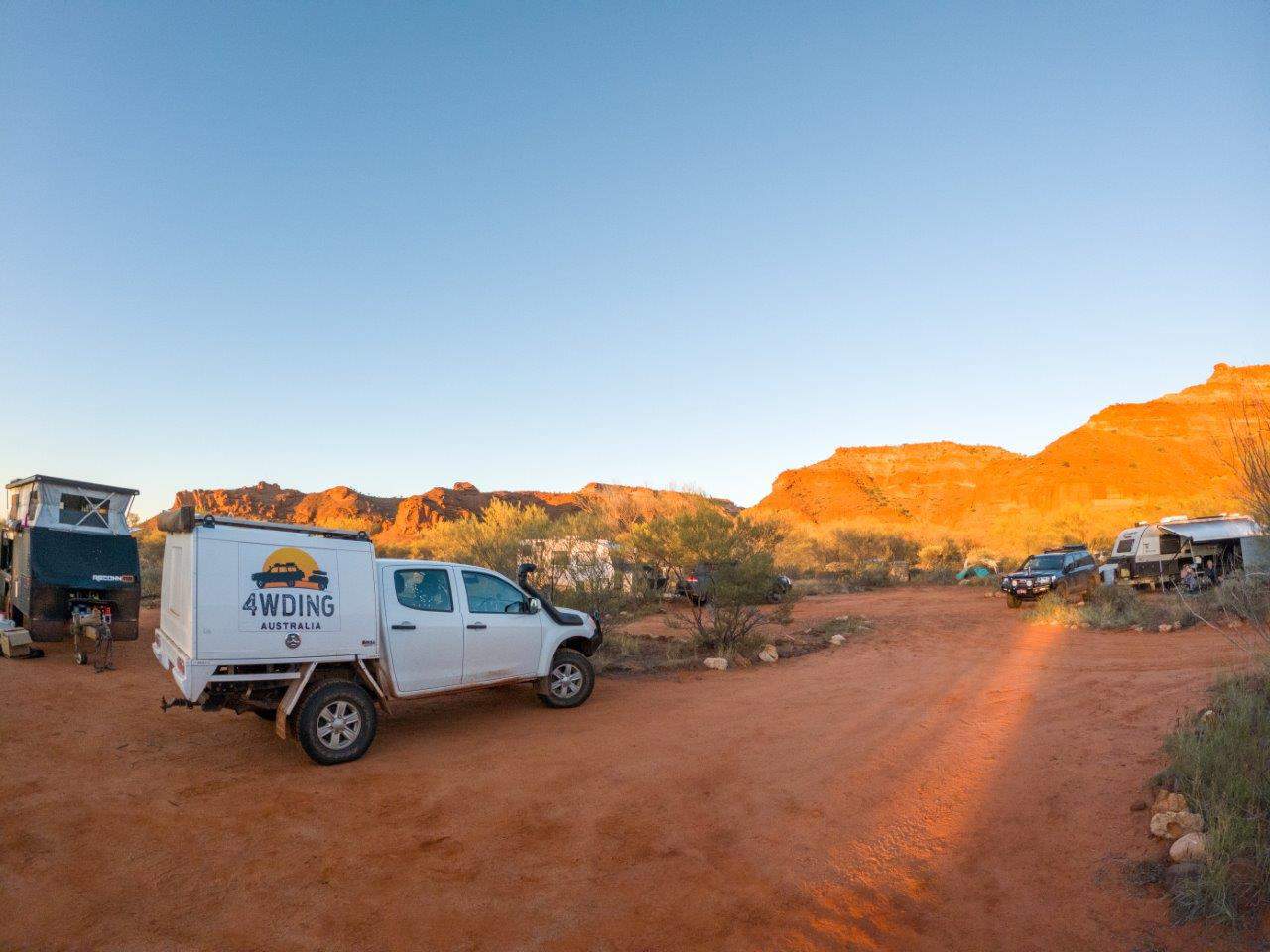 Not a bad place to wake up!

What hikes and attractions are there?

Everything on the East side (which is where 99% of people go) is easily accessible, and you could actually walk to the start of every attraction from Temple Gorge if you really wanted to. You need a couple of days to really see a decent chunk of the Kennedy Ranges, but some of them are quite quick and easy.

To start with, you have the walk into Temple Gorge, which splits half way. The right side goes to a beautiful pool, and the left side goes to an ending in the rocks. Both are fairly short and asides from a bit of rock scrambling, relatively easy to do. Our kids did them both with no issues.

You can walk to this from the camp site at Temple Gorge; its only a few hundred metres up the track. 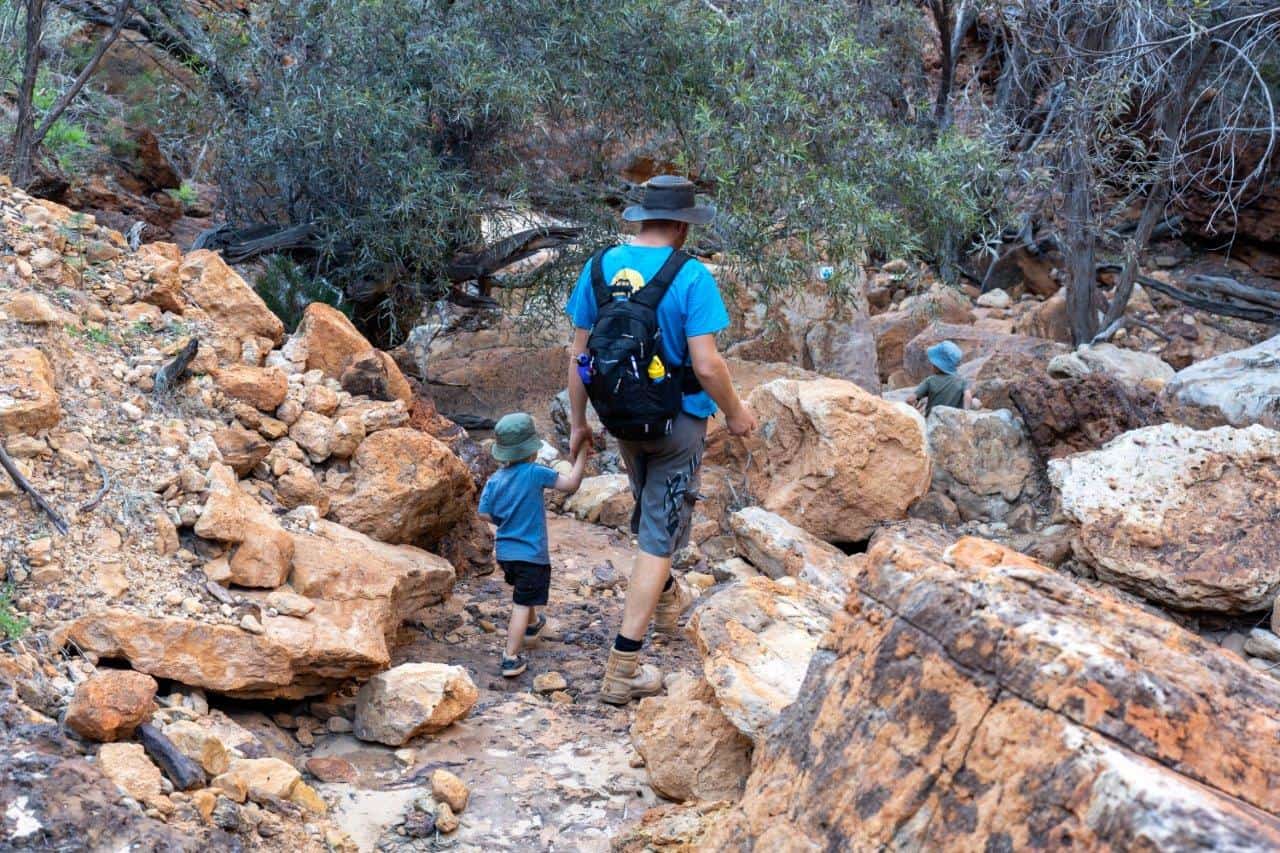 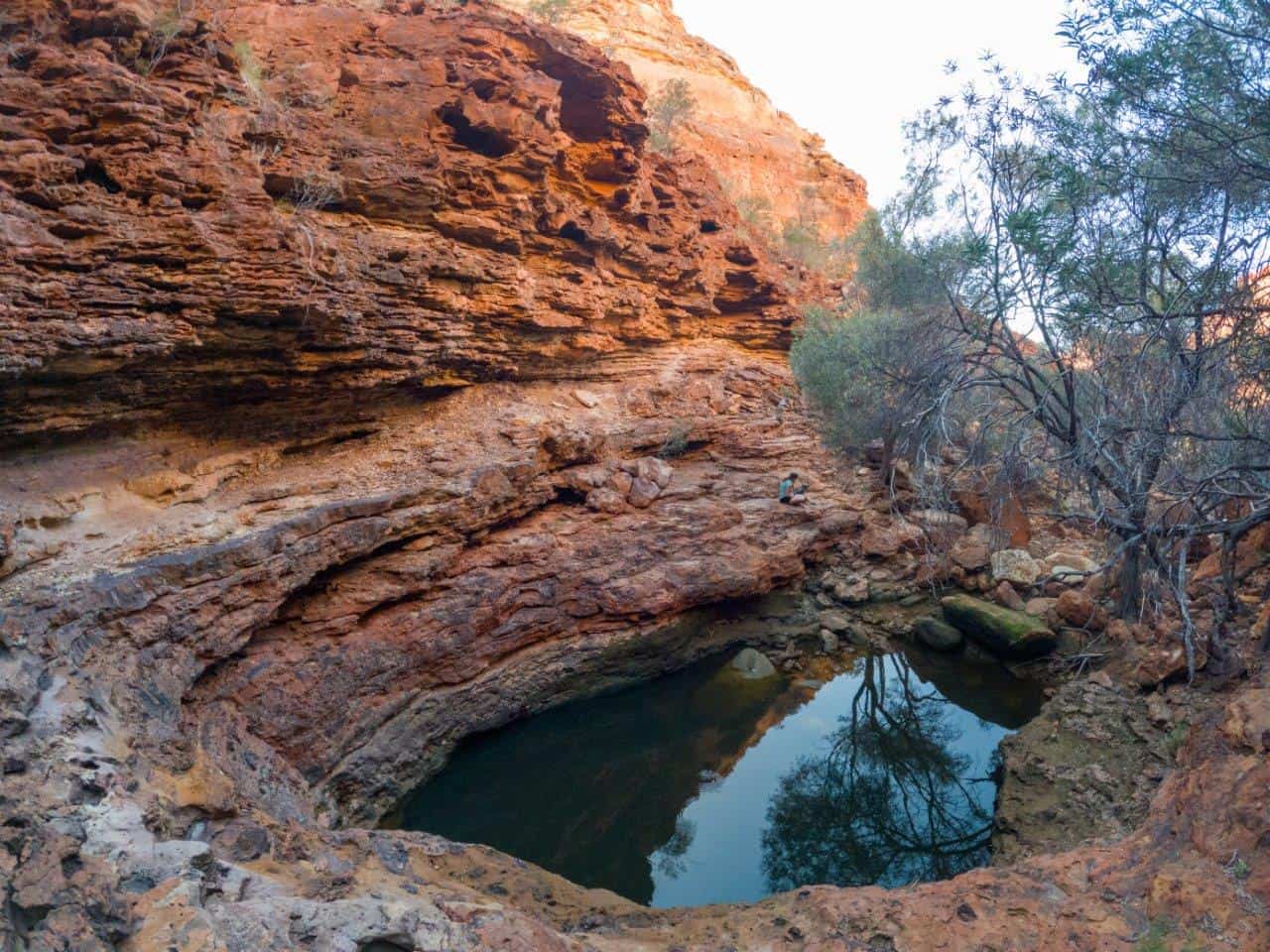 The pool at the end of Temple Gorge

If you want a bit more of an adventure, we’d highly recommend the escarpment walk. We did it in late afternoon, but I suspect even earlier you’d have almost full shade until you made it to the top. This requires a fair bit of rock hopping and fitness, but its not a difficult trail and once you are on the top its flat for some time, taking you to a lookout with spectacular views of the ranges and camp ground.

Again, the start can be walked to from Temple Gorge; its only about a hundred metres from the closest camp sites, heading south. 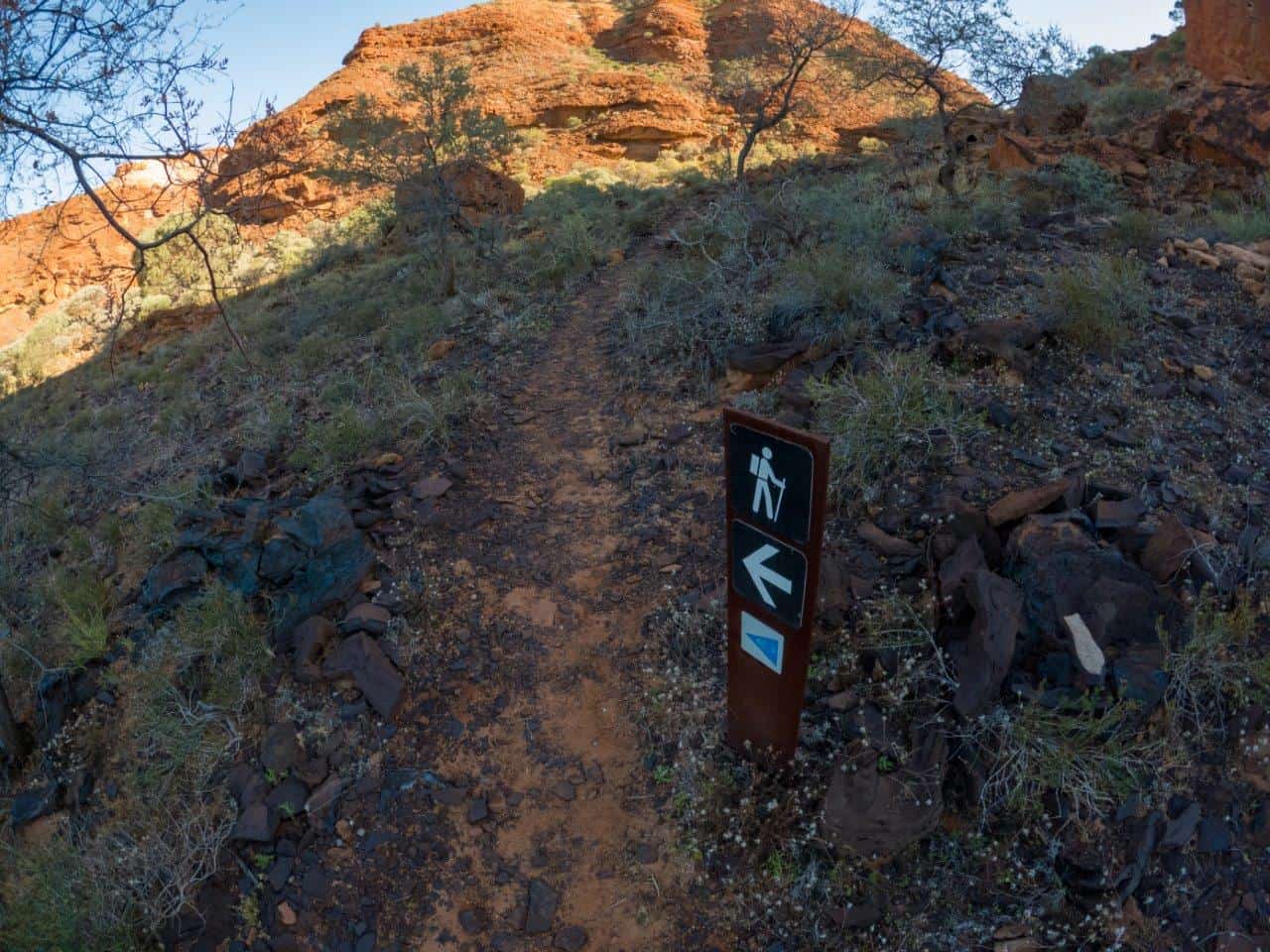 The Escarpment trail all the way to the top 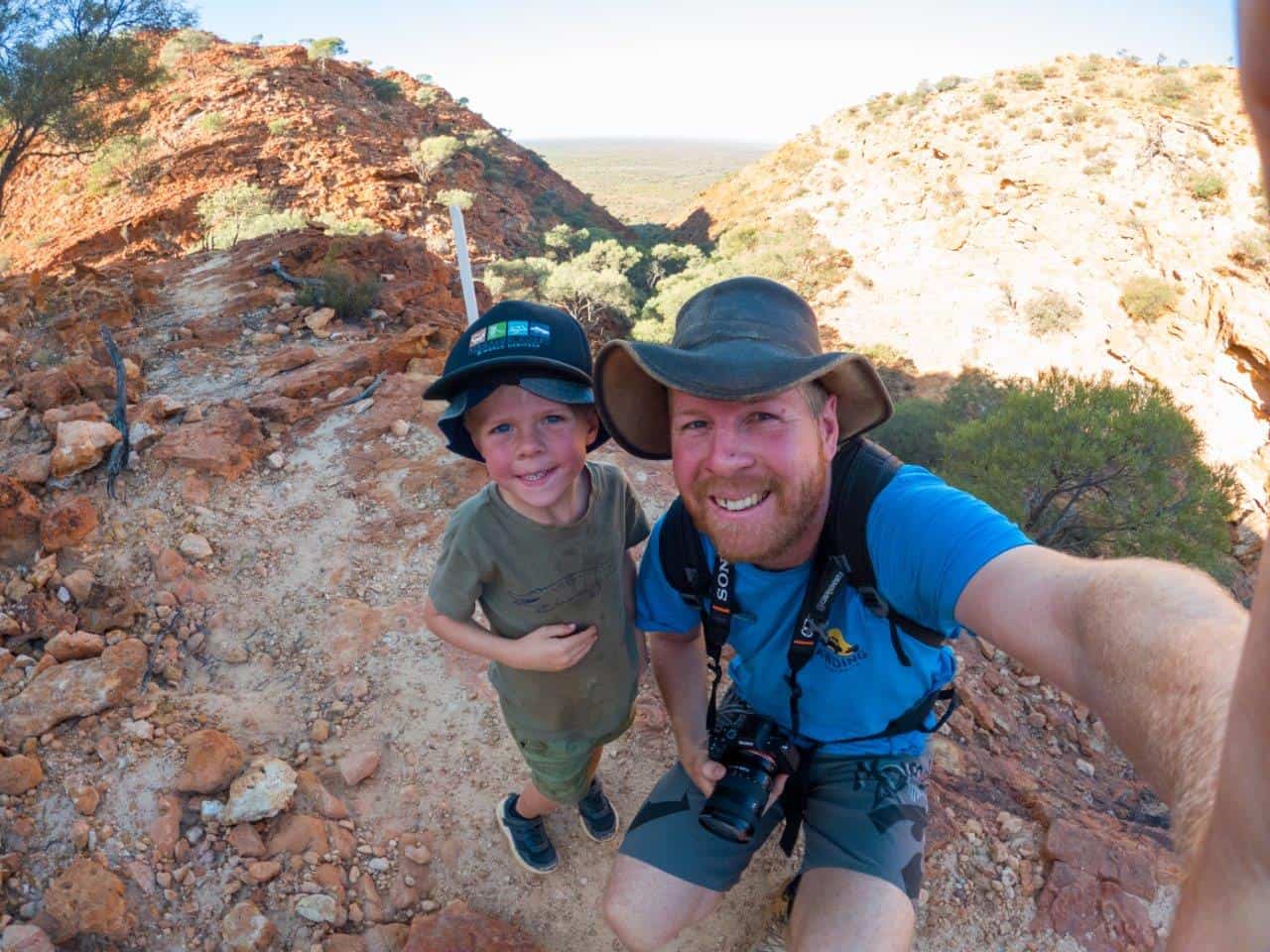 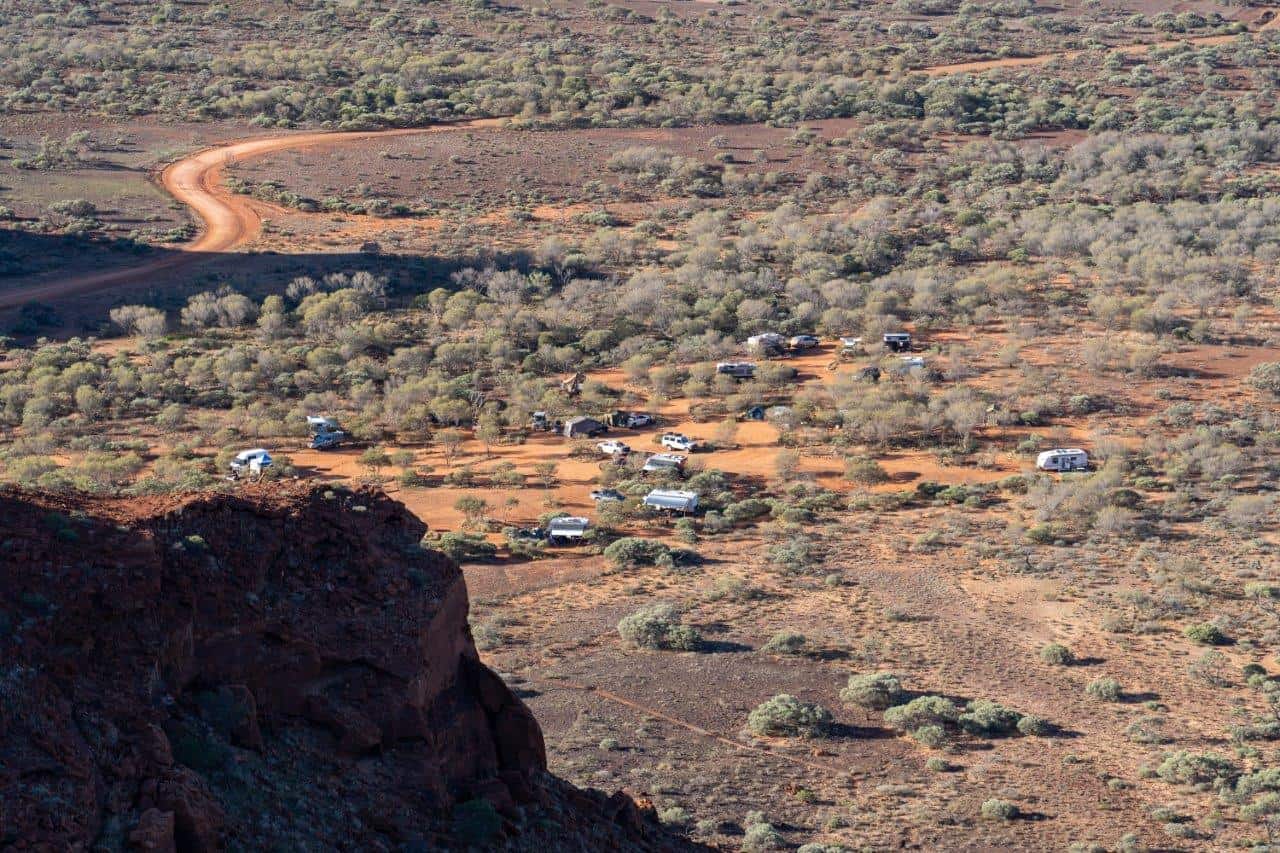 Looking down from the Escarpment Trail

One of the easiest and quickest gorges to check out in the Kennedy Ranges is Honeycomb Gorge. You can drive a couple of kilometres to the car park, and the walk in is almost all flat, with very limited rock work. After about 5 minutes of walking you’ll be there, and despite having seen photos I was still quite shocked at how beautiful, and amazing it is. There might be a bit of water around, you should have some shade and its well worth spending time relaxing here. 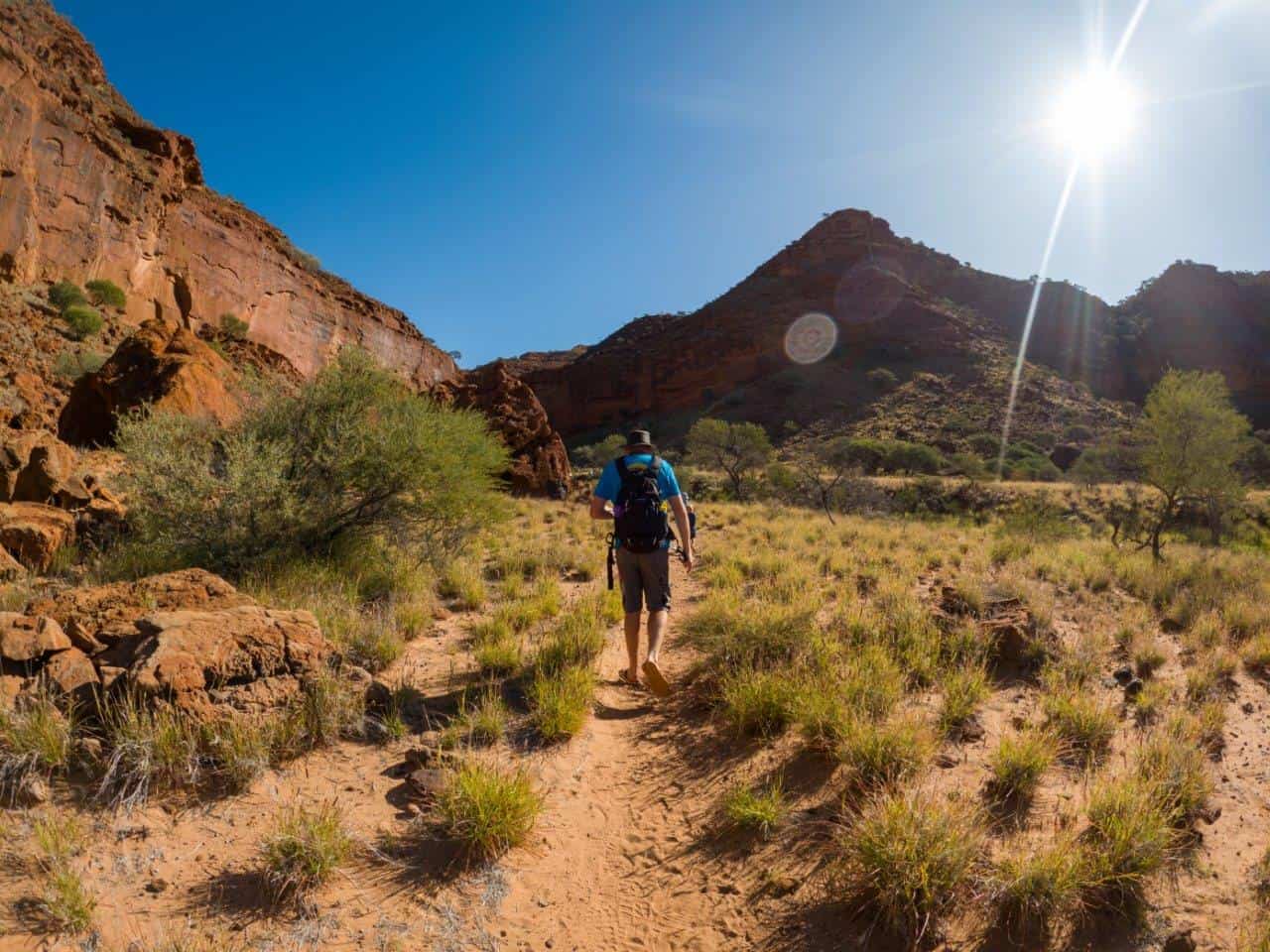 The walk into Honeycomb Gorge is very quick and easy 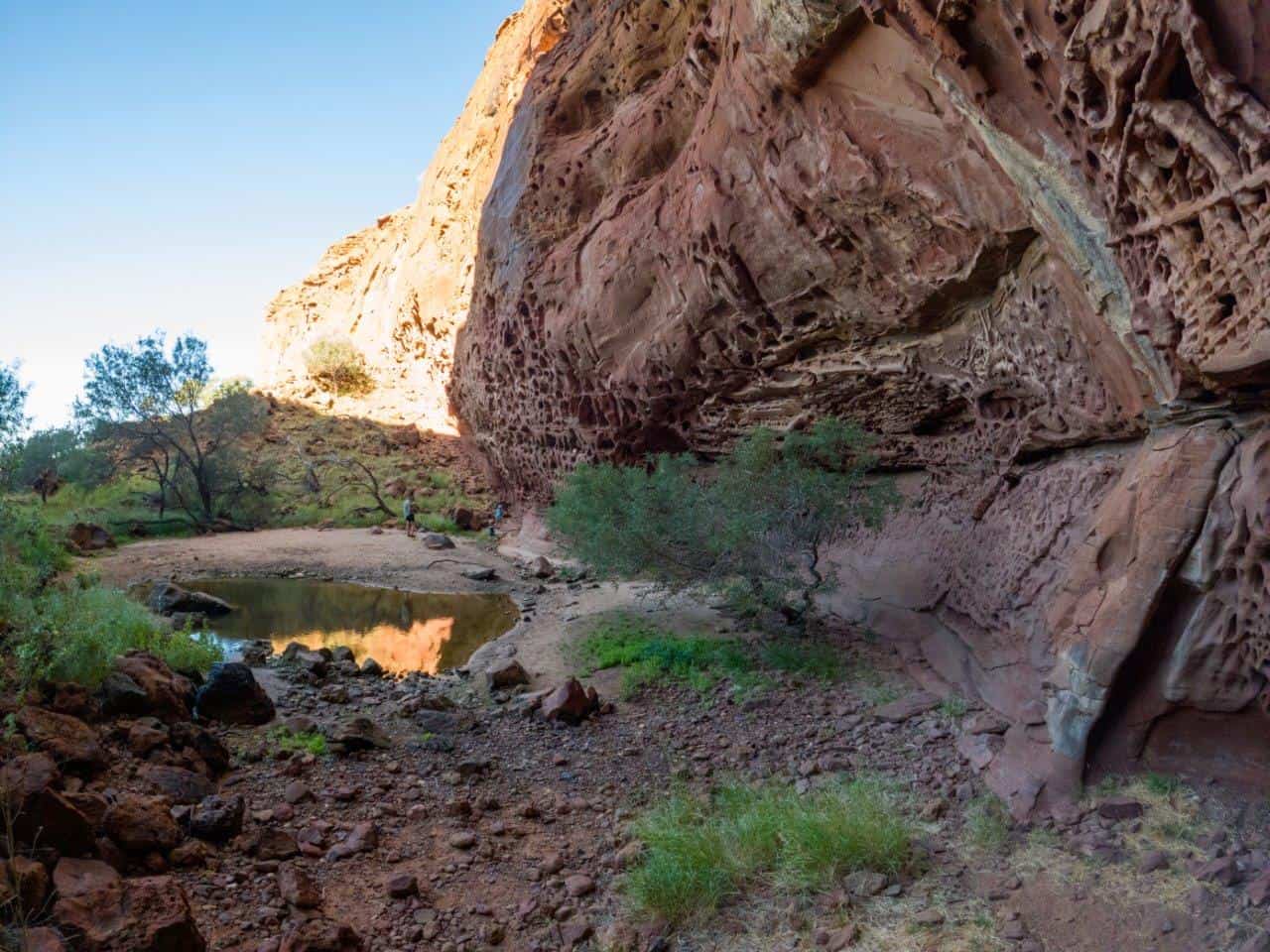 The end is spectacular 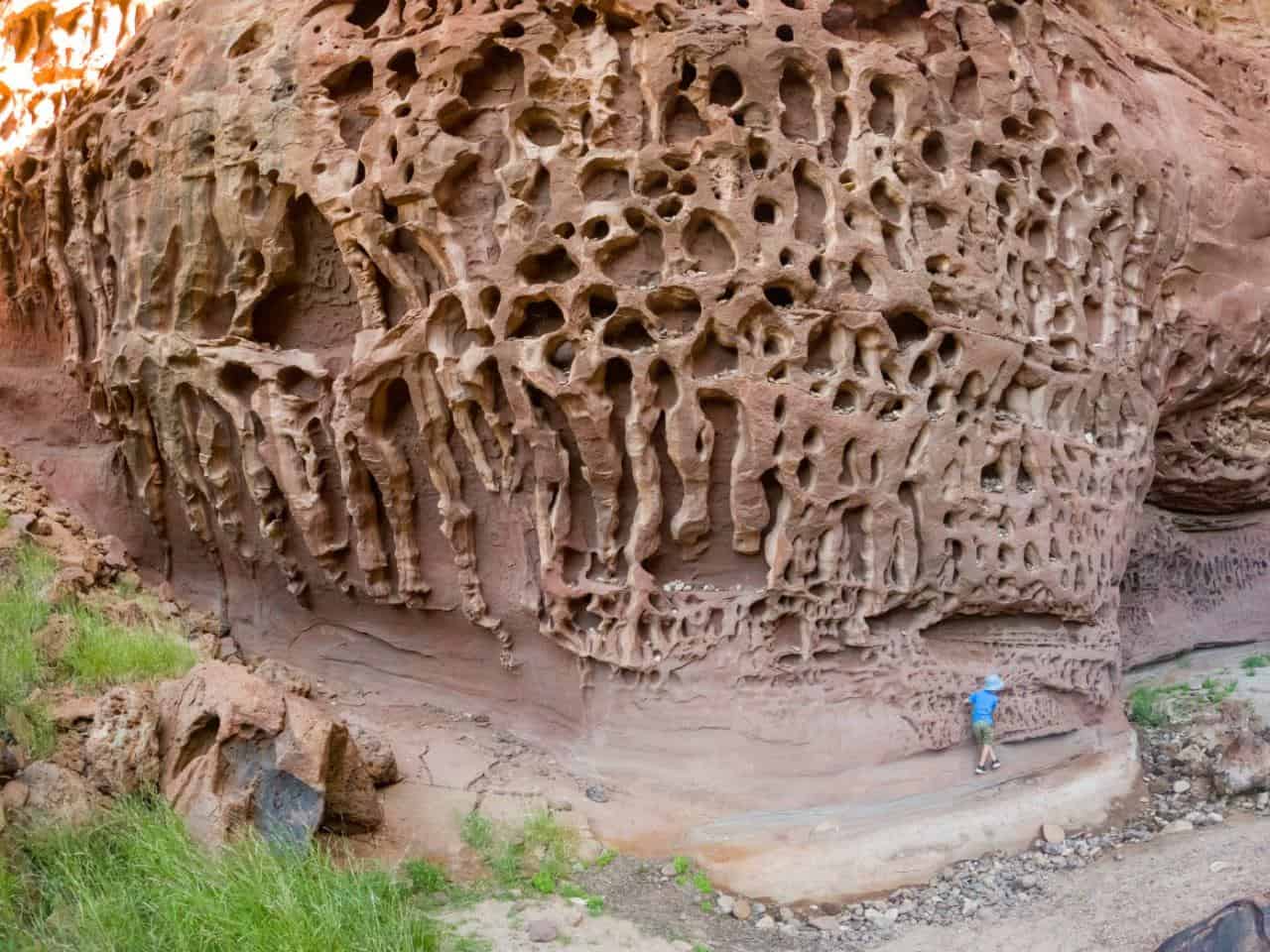 No wonder its called Honeycomb Gorge!

The furthest drive from Temple Gorge is to the Sunrise view trail, which literally takes about 5 minutes by car. I got up early one morning with Oliver and headed out, with the light bar showing the way, and then we hiked for about 2 minutes to the top of a flat lookout, and sat there while the sun rose.

This was magic, as the sun lights the ranges up and you get a brilliant orange glow that made the area look absolutely incredible. This is completely worth doing. 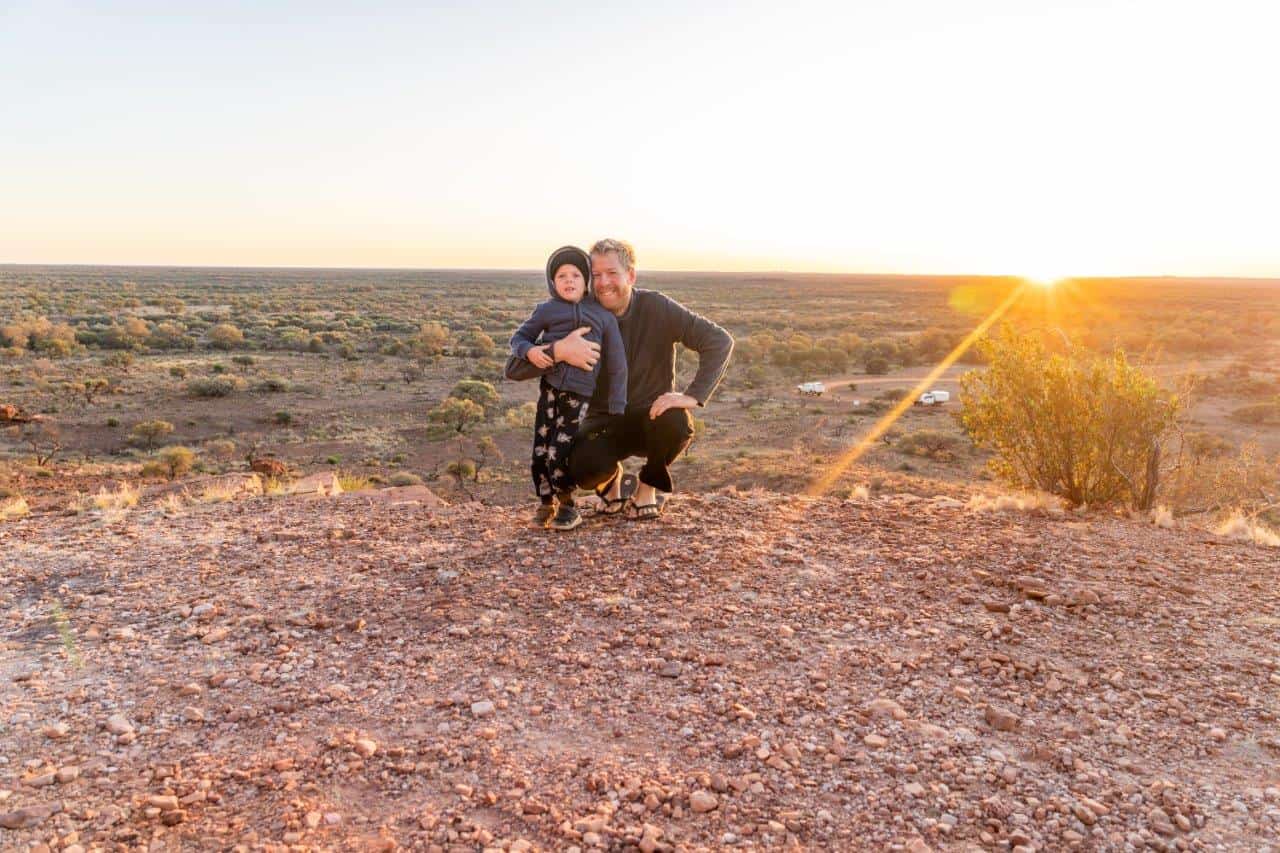 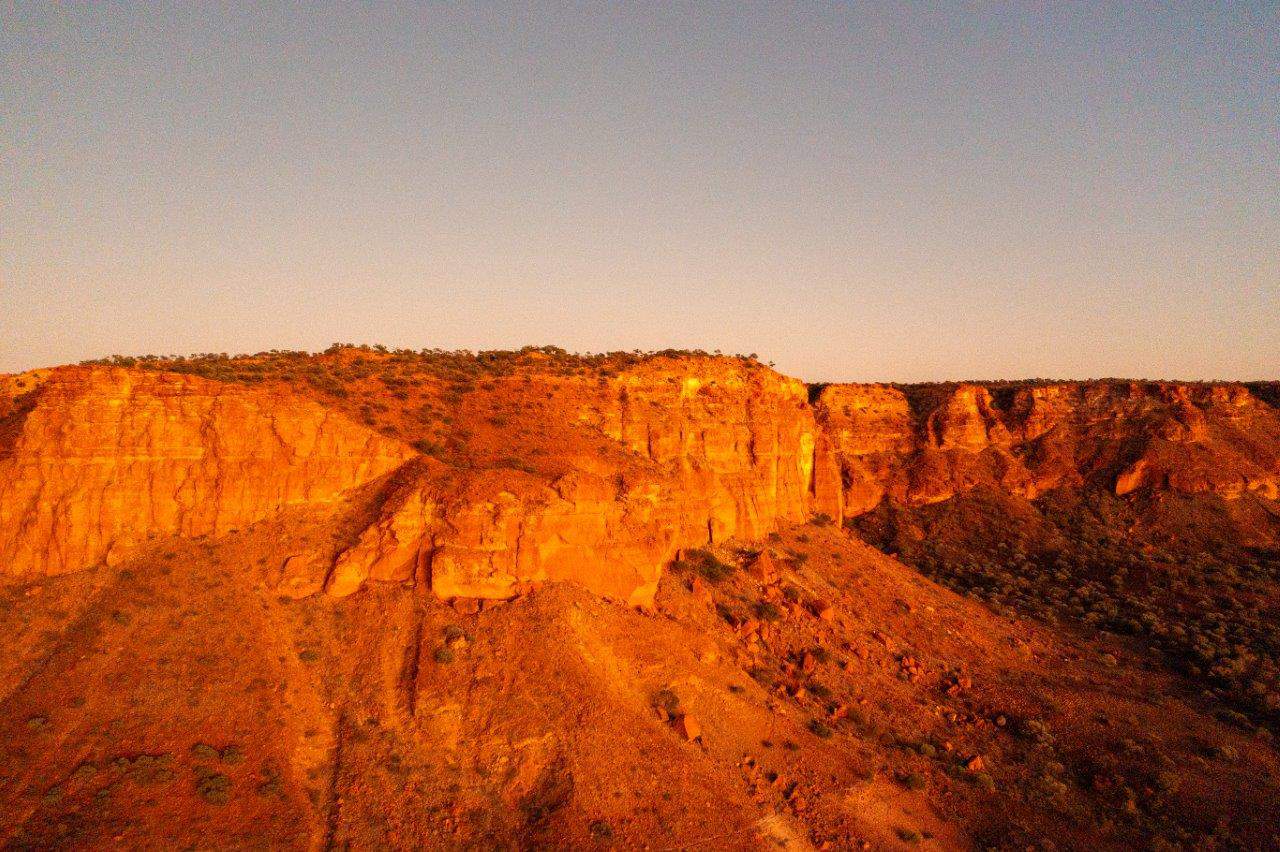 The orange glow at sunrise is truly magnificent

Wildflowers at the Kennedy Ranges

If you head to the Kennedy Ranges in Wildflower season, you’ll see some spectacular sights. My folks had the good fortune of visiting last year when they were out, and the photos that I saw completely transform an already beautiful area.

Late July this normally kicks off, with August and September being good months to visit depending on the year.

If you are up for a serious 4WD adventure, you can actually cross the Kennedy Ranges from East to West, and you’ll go through all sorts of different terrains, including beach sand at the top. Do this in a group, and with a good setup, or you might end up in a world of pain. 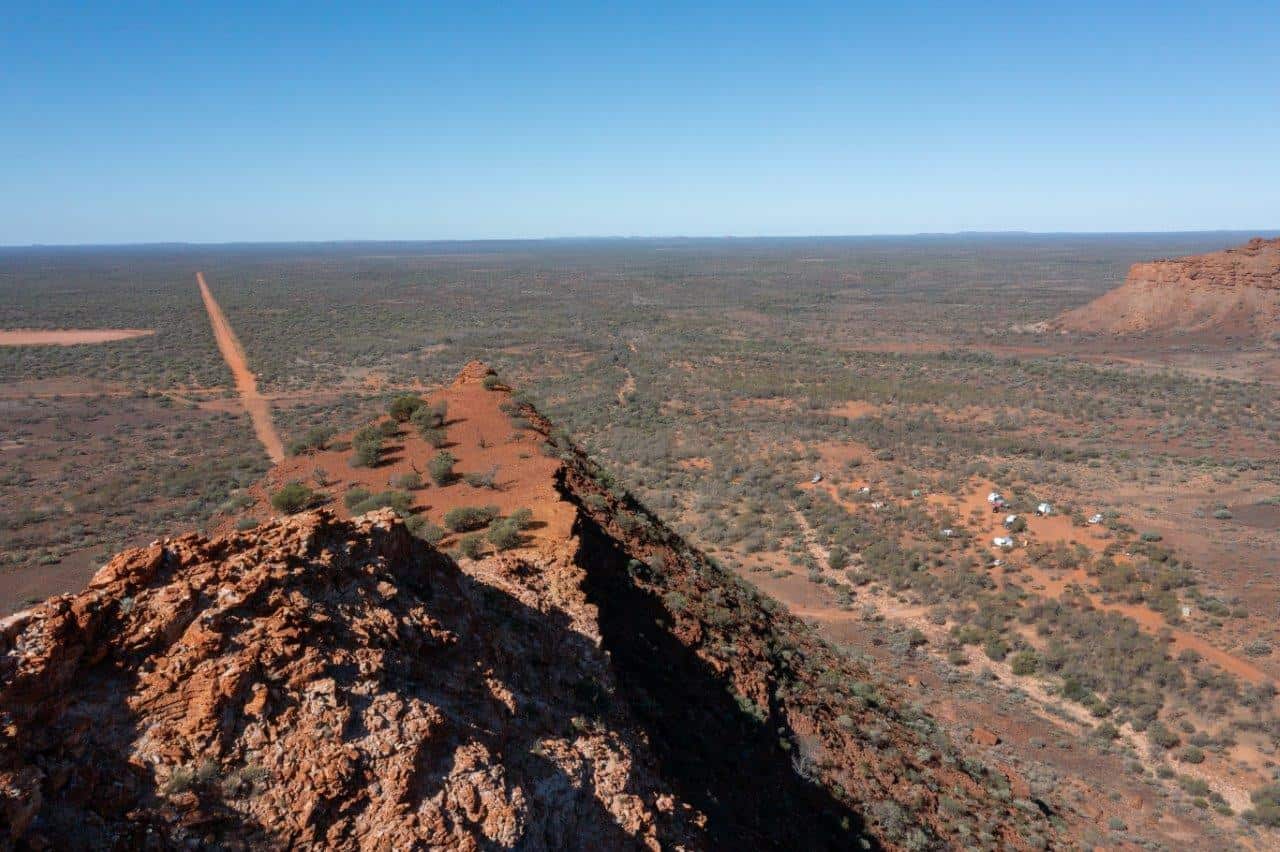 It’s a beautiful place, and we’d come back 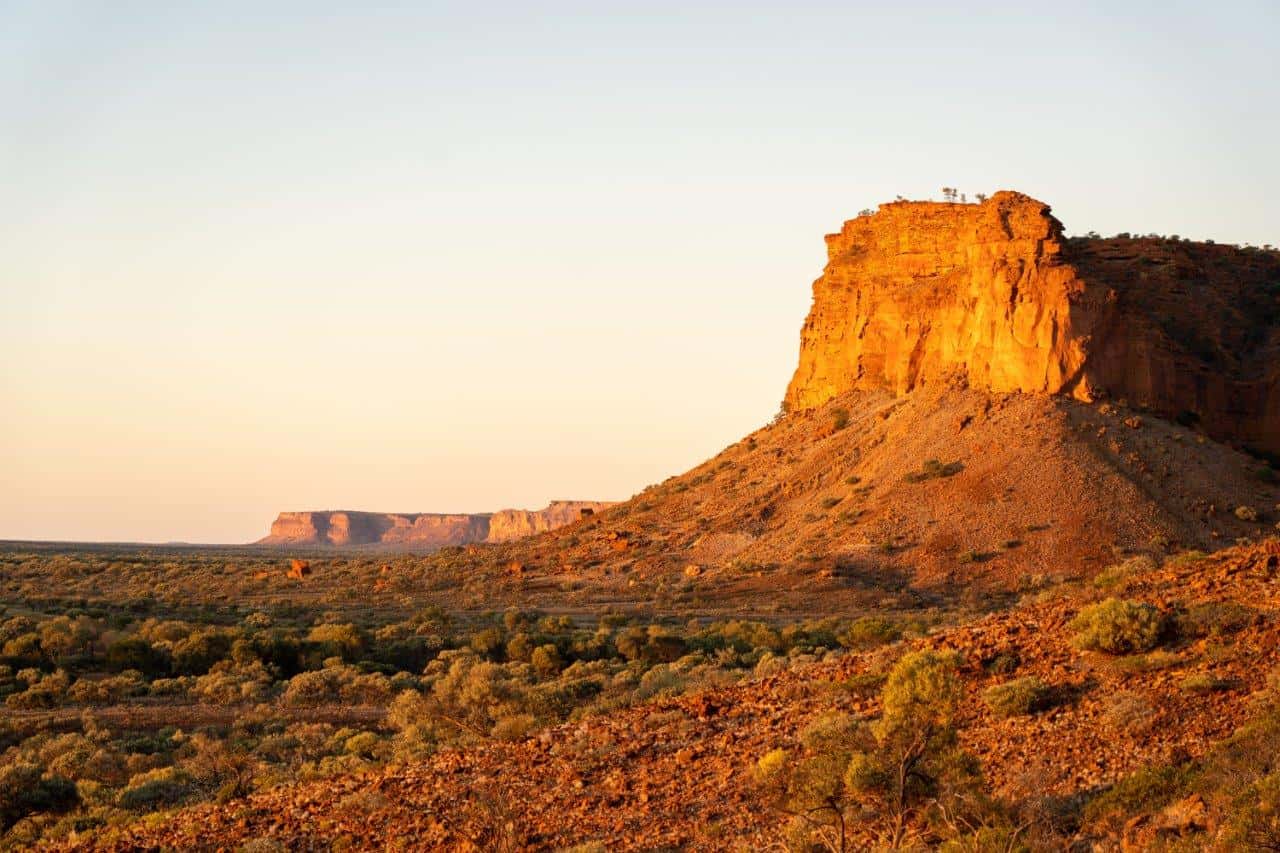 The Kennedy Ranges are probably more spectacular than Mt Augustus

Have you been to the Kennedy Ranges? If not, we 100% recommend visiting; its well worth a few days!