In WA, we have good camping, great camping and world class camping. Some of the camp sites along the Ningaloo Reef are up there with the best in the world, and Ningaloo Station (now called Ningaloo Coast) is one of the most popular camping places in the region. 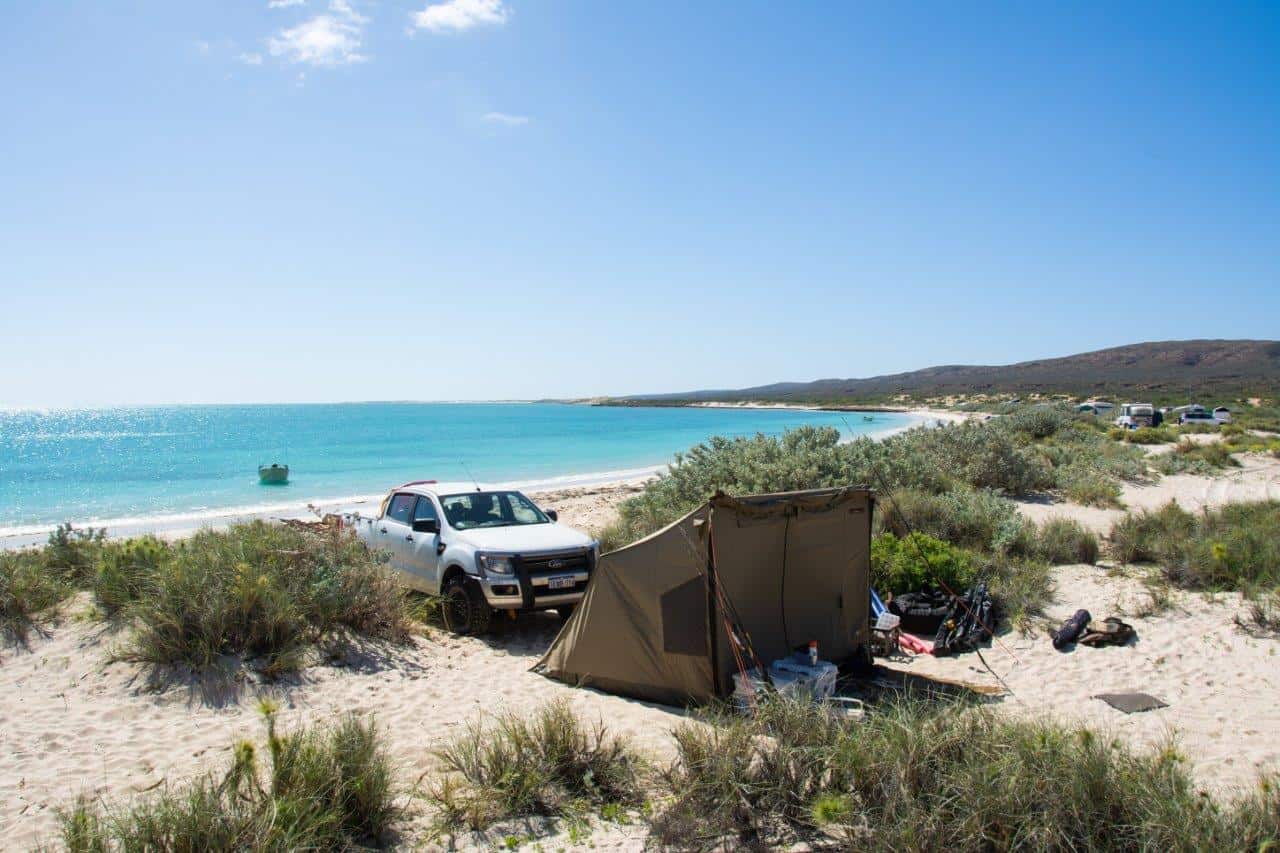 The camping at Ningaloo Station is nothing short of mind blowing

Where is Ningaloo Station?

You’ll find Ningaloo Station about 85km north of Coral Bay, and 135km south of Exmouth. It’s literally right on the coast of the Ningaloo Reef, and covers a significant amount of coastline with some of the best snorkeling, fishing and diving in the world.

At 1180km north of Perth its a fair hike, but if you get good weather its worth it 10 times over.

How do you get to Ningaloo Station?

Access to Ningaloo Station is by the gravel/limestone road only, which comes off the Minilya Exmouth Road. 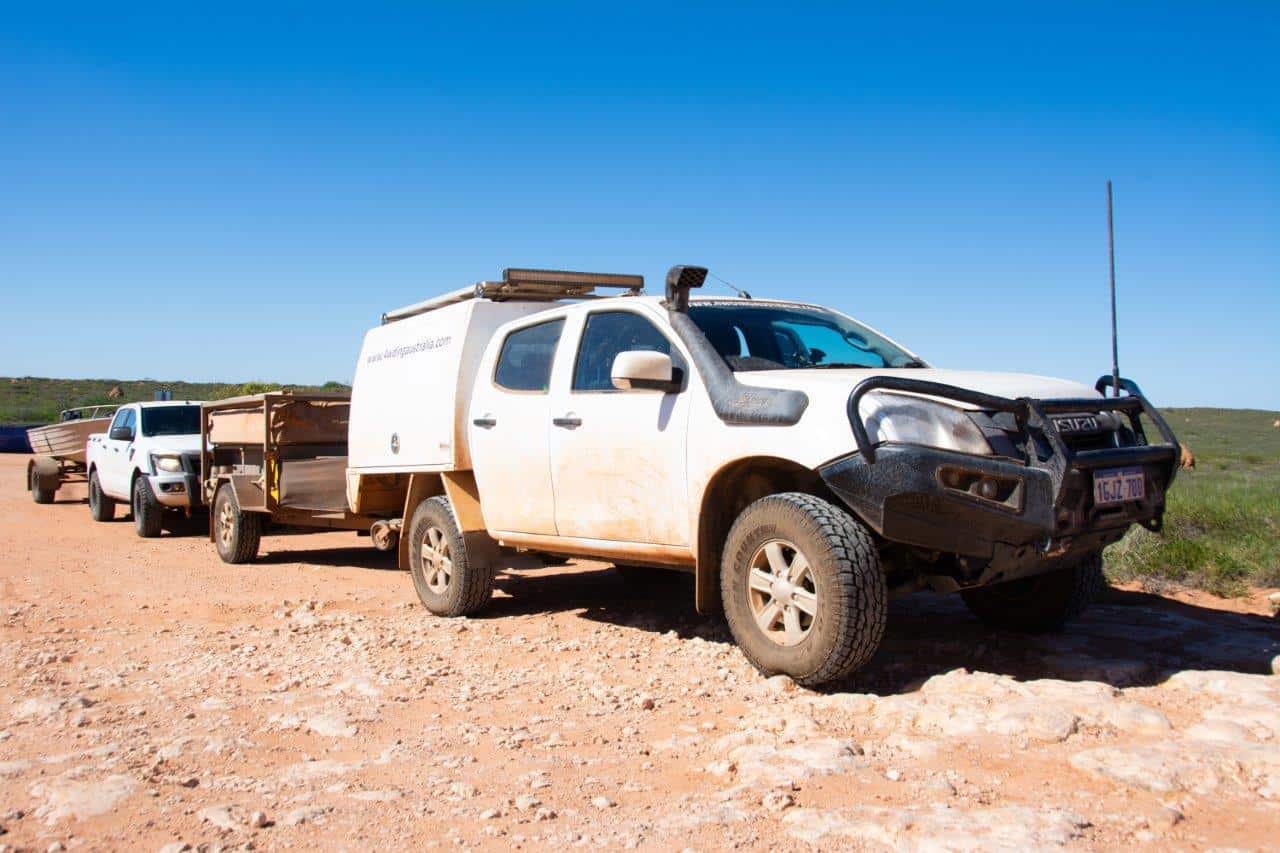 The drive into Ningaloo Station is one to remember

We’ve done some pretty average roads over the years, and find it hard to really explain how bad a road is. With Wikicamps around, first hand knowledge is passed on relatively quickly, and on our 3 month trip up north I kept reading that the road to Ningaloo Station was absolutely terrible, to the point where people were saying its the worst they’ve been on and that you should reconsider going.

I must admit I was keen to see how bad it actually was, and we made a point of letting our tyres down considerably to absorb the bumps. The ‘road’ is fairly wide for majority of it going into the homestead, but its made of limestone with lots of rocks sticking up and I’m sure it would be almost impossible to grade to a decent condition. 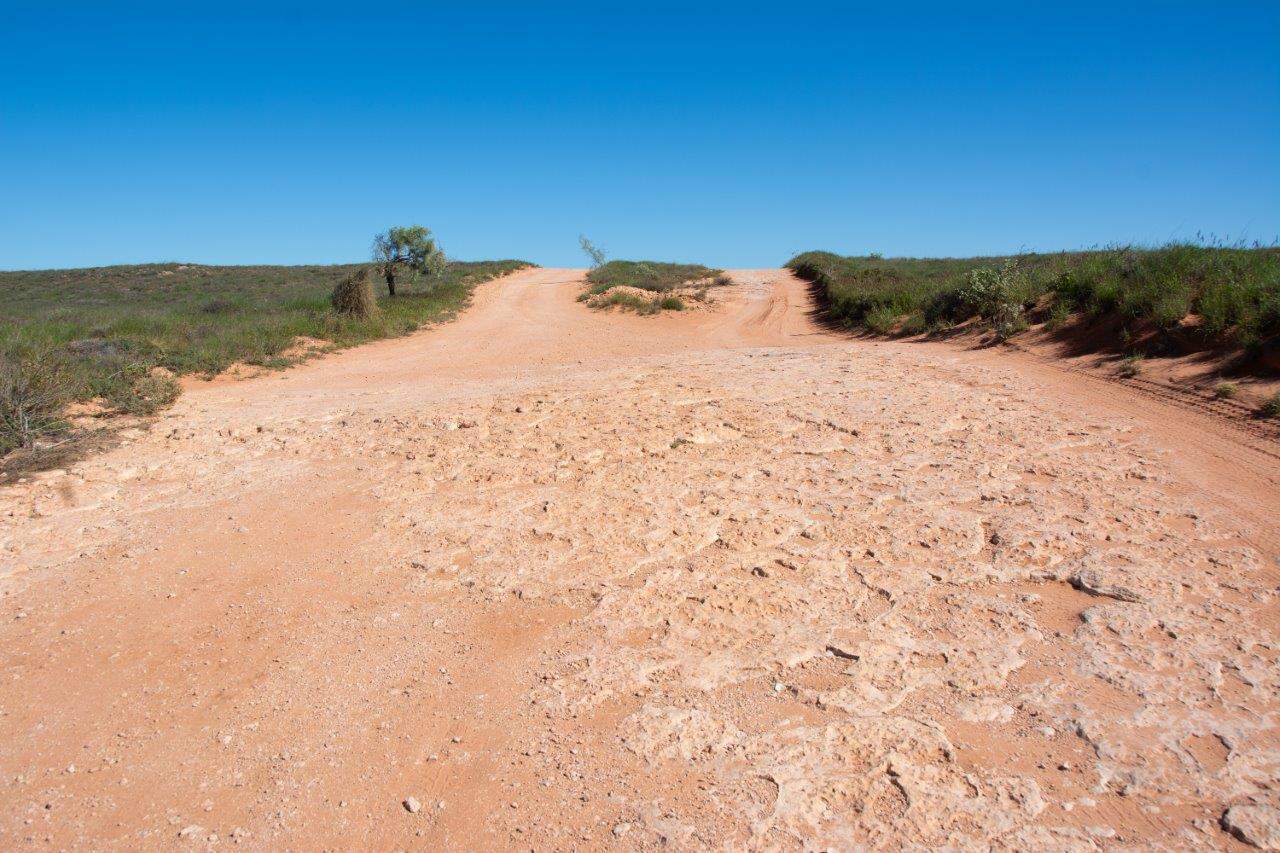 A typical example of the rocks on the road in

You really have two ways to manage it; drive in very slowly with your tyres down and ensure as little stress is put on your setup, or sit at a faster speed and watch the bumps blend into a smoother drive in. The issue with going faster is that if a hole appears, or a hump you’ll have a hard time to pull up fast enough and risk major damage when you hit it.

With low tyre pressures, sitting between 40 and 60km/h we managed to get in fairly easily, and certainly wouldn’t rate it as the worst road we’ve done. It’s not great, but I think too many people don’t let their tyres down enough and cop the corrugations and bumps for a long time 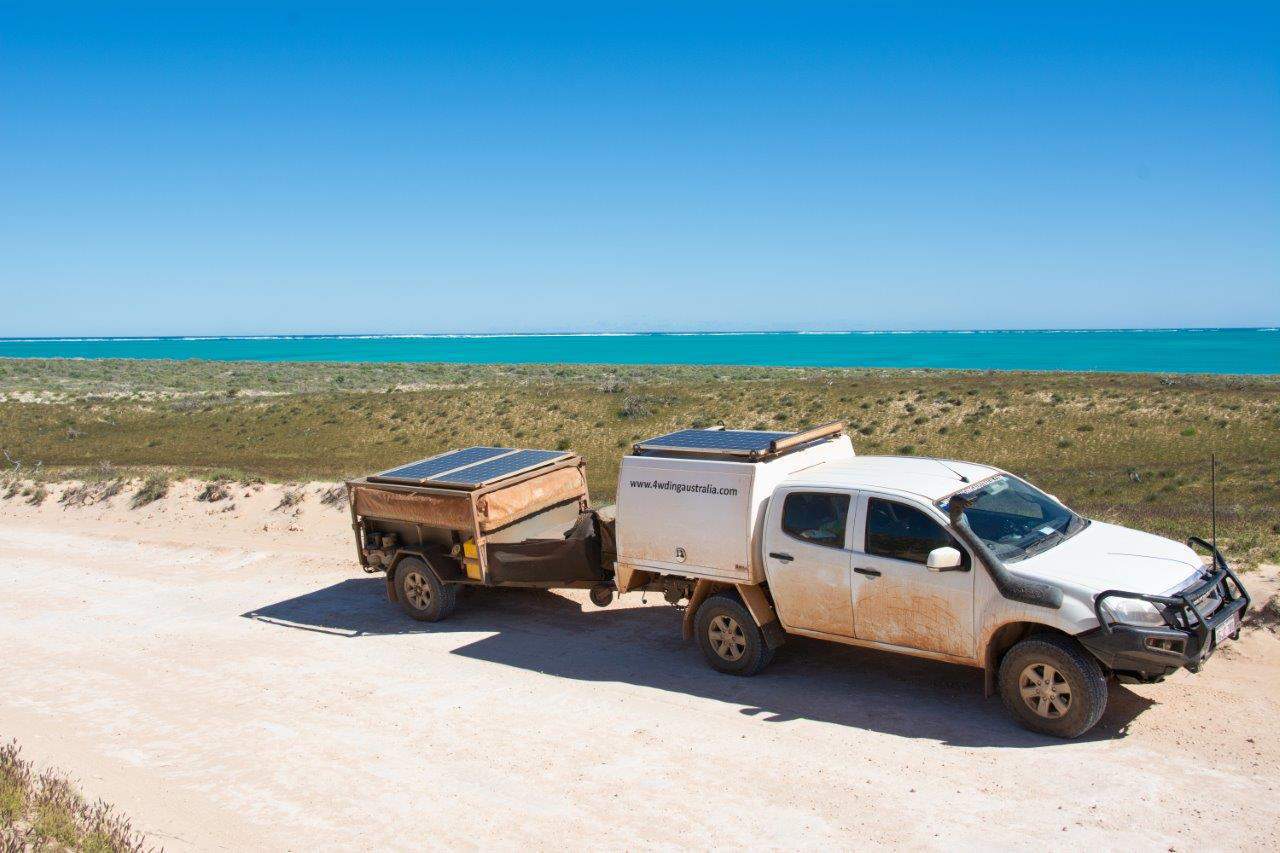 I’m not going to say a 4WD is a must, as you’d get in and out without one but in terms of longevity I wouldn’t be taking most 2WD vehicles there. If you do take a 2WD vehicle in, be careful where you drive, as some of the camp sites are quite sandy and it would be very easy to get bogged.

Can you take a caravan in?

Yep, and hundreds of people do. Again, you probably want something that is semi off road at least, and let your tyres down properly or the road is going to hurt it. We saw some big vans at Ningaloo Station, with people setting up for long stays. 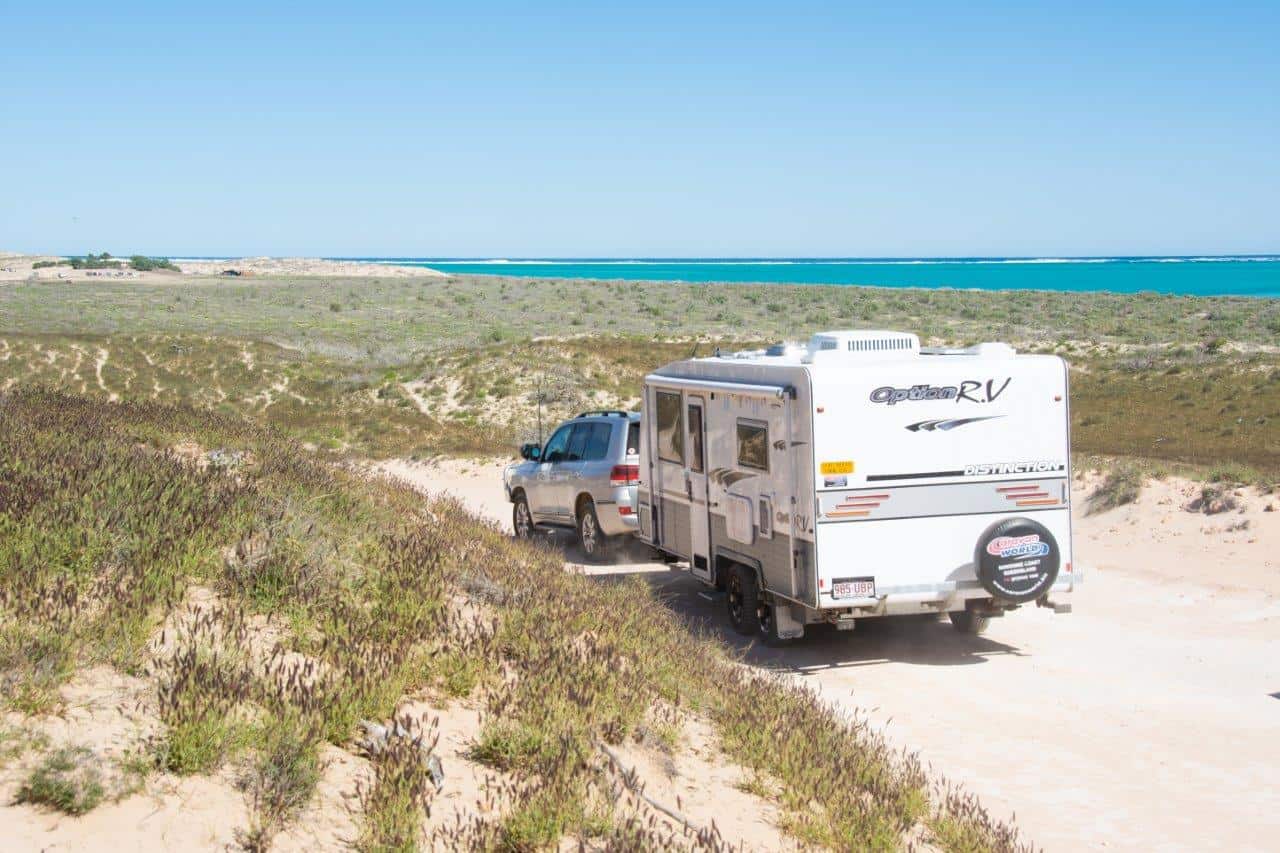 Lots of vans go into Ningaloo Station. Just let your tyres down properly

Up until a few years ago, Ningaloo Station was leased, and they ran their own camping and had some cattle. A big court case ensued and now DBCA (Department of Biodiversity, Conservation and Attractions) manage the station.

All of the camp sites have zero amenities, with exception to dump points that have recently been installed. You must have your own portable toilet to camp at Ningaloo Station 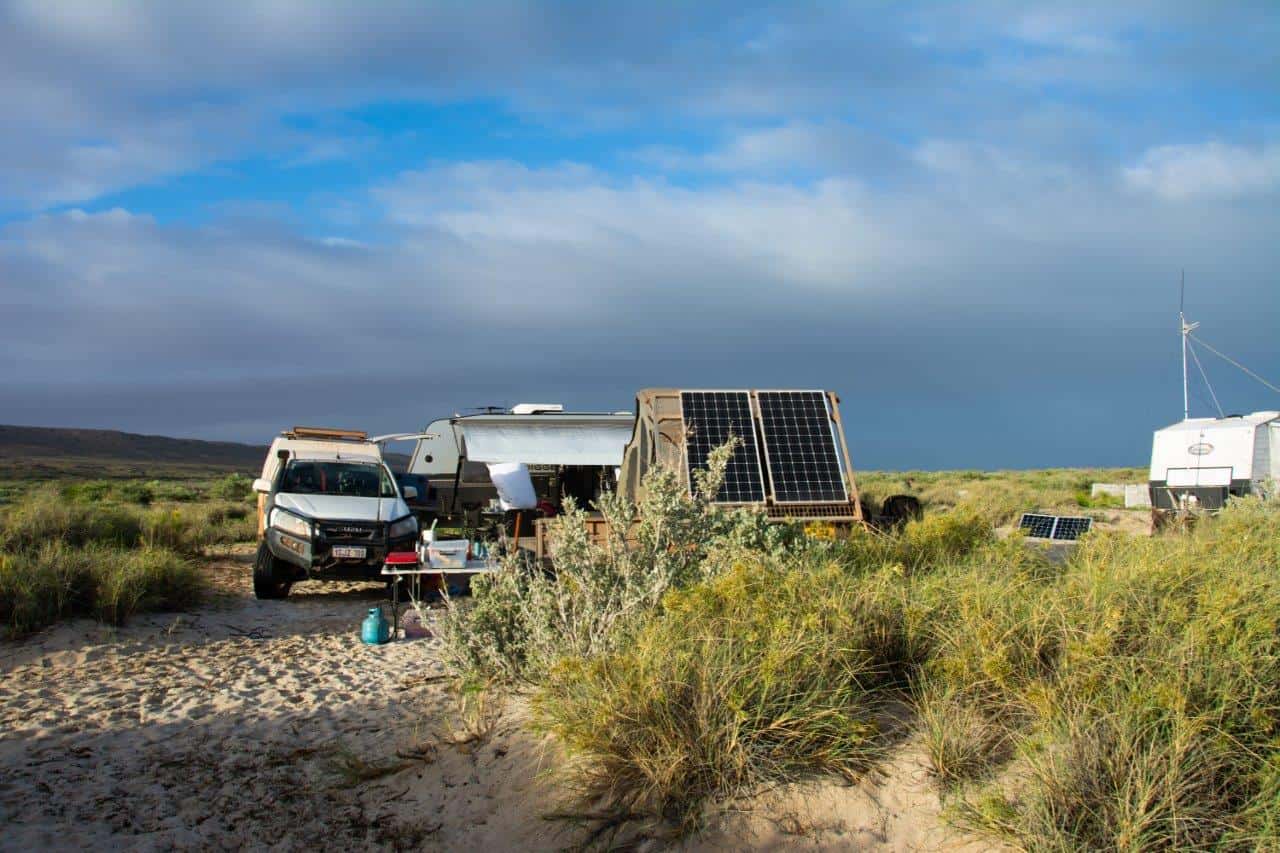 Our camp site at North Lefroy

How do you book Ningaloo camp sites, and how much is it?

All of the camp sites are booked on the DBCA website, for $8 per adult per night, $6 per concession and $3 per child. Booking

Typically, the best time to visit Ningaloo is between May and August. You’ll have the least wind, and the best chance for good weather. That said, be prepared for bad weather as it does come. March, April, September and October are also potentially good months but the wind is much more likely. 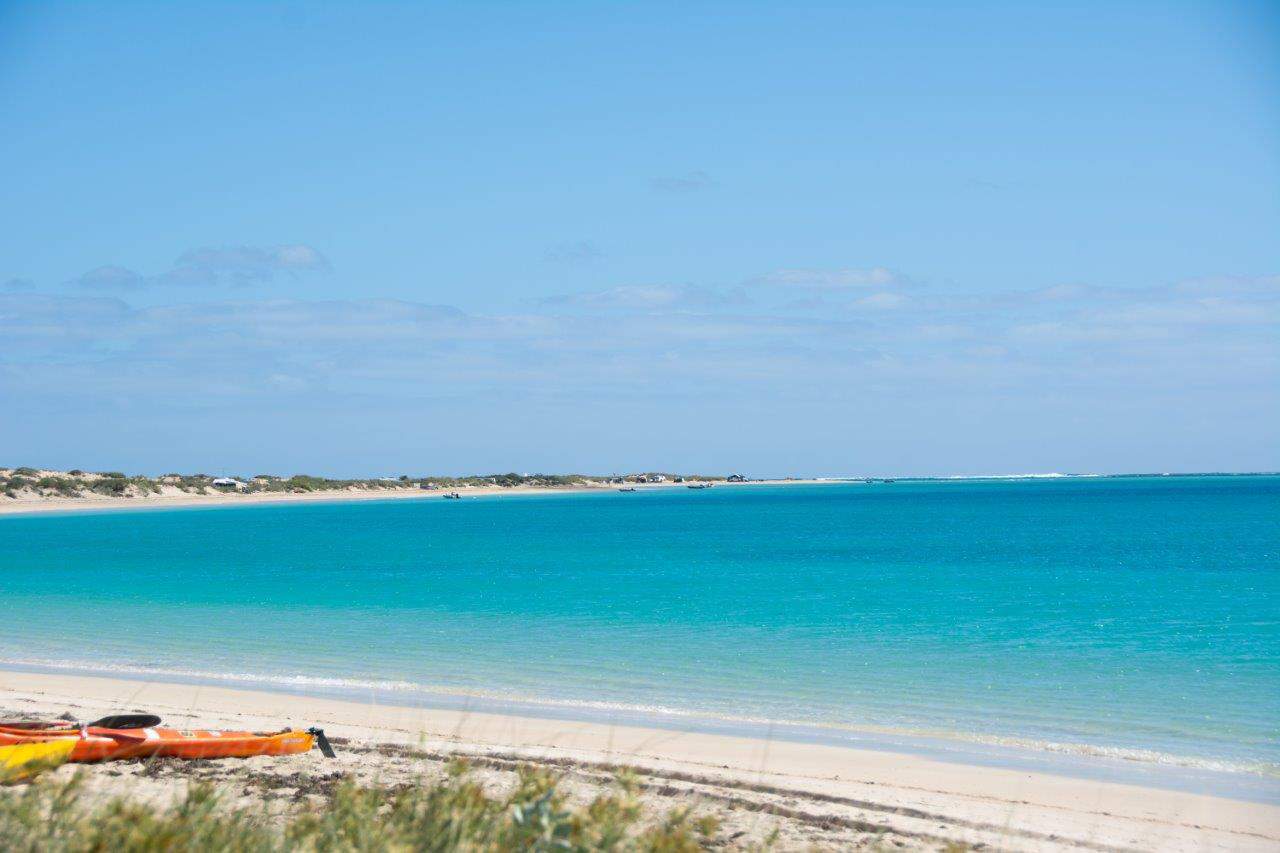 If you get good weather, you’ll have this

Be prepared for wind

The Ningaloo Coast can be a very, very unpleasant place if you aren’t set up well. Even for someone who is well set up the wind can get old real fast. We actually left Ningaloo Station a day early because the wind just kept blowing, and wasn’t forecast to get any better.

It makes living outdoors extremely unpleasant, and when you can literally see the sand moving around your caravan and camper trailer its not insignificant. 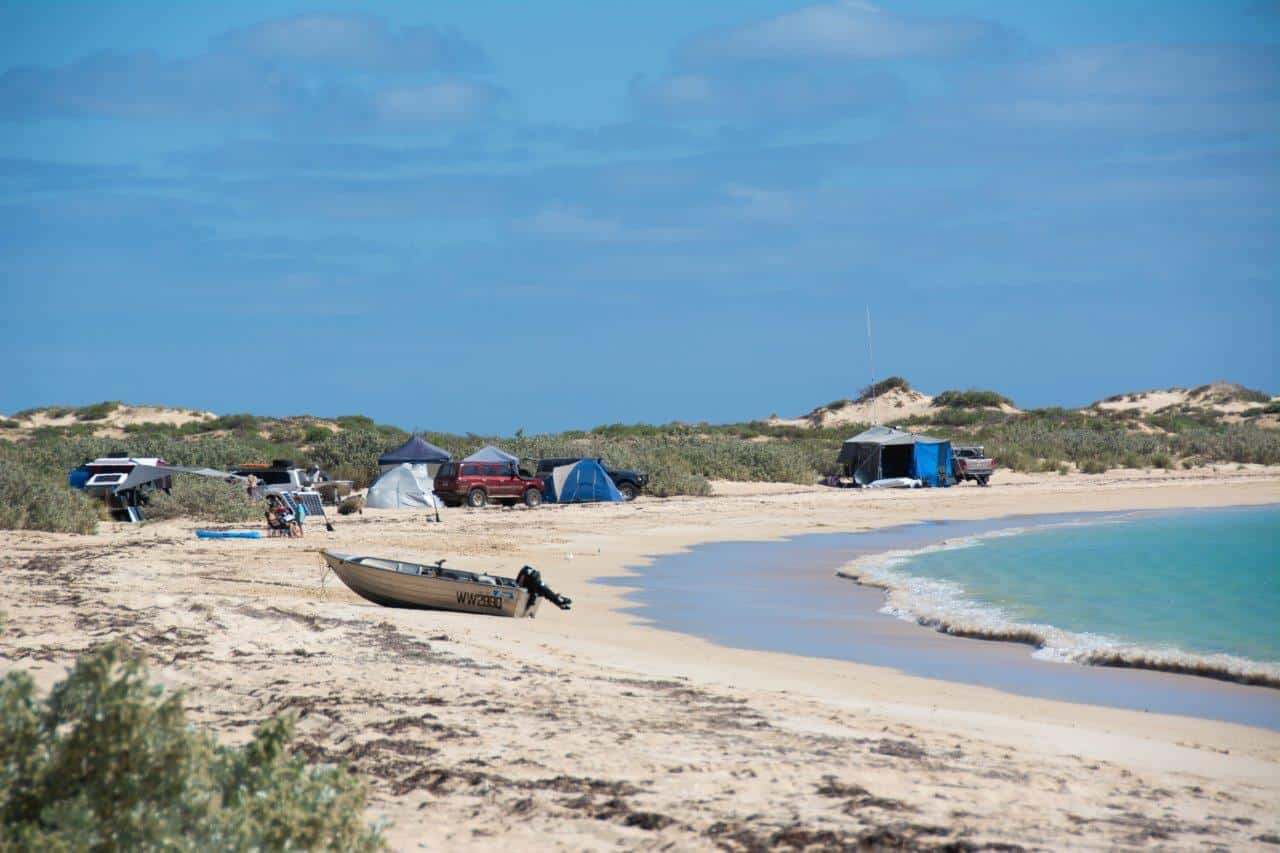 It can be windy for days at Ningaloo Station

The whole Ningaloo Reef area has amazing fishing. I suspect that some of the areas close to the main camp sites have been heavily over fished in years gone by, but you can still get some great fish off the beach, and even better ones from a kayak or boat.

On days when its calm enough you can get out behind the reef, and that’s when you really do well. If you have a small boat though, don’t do this unless you are experienced! 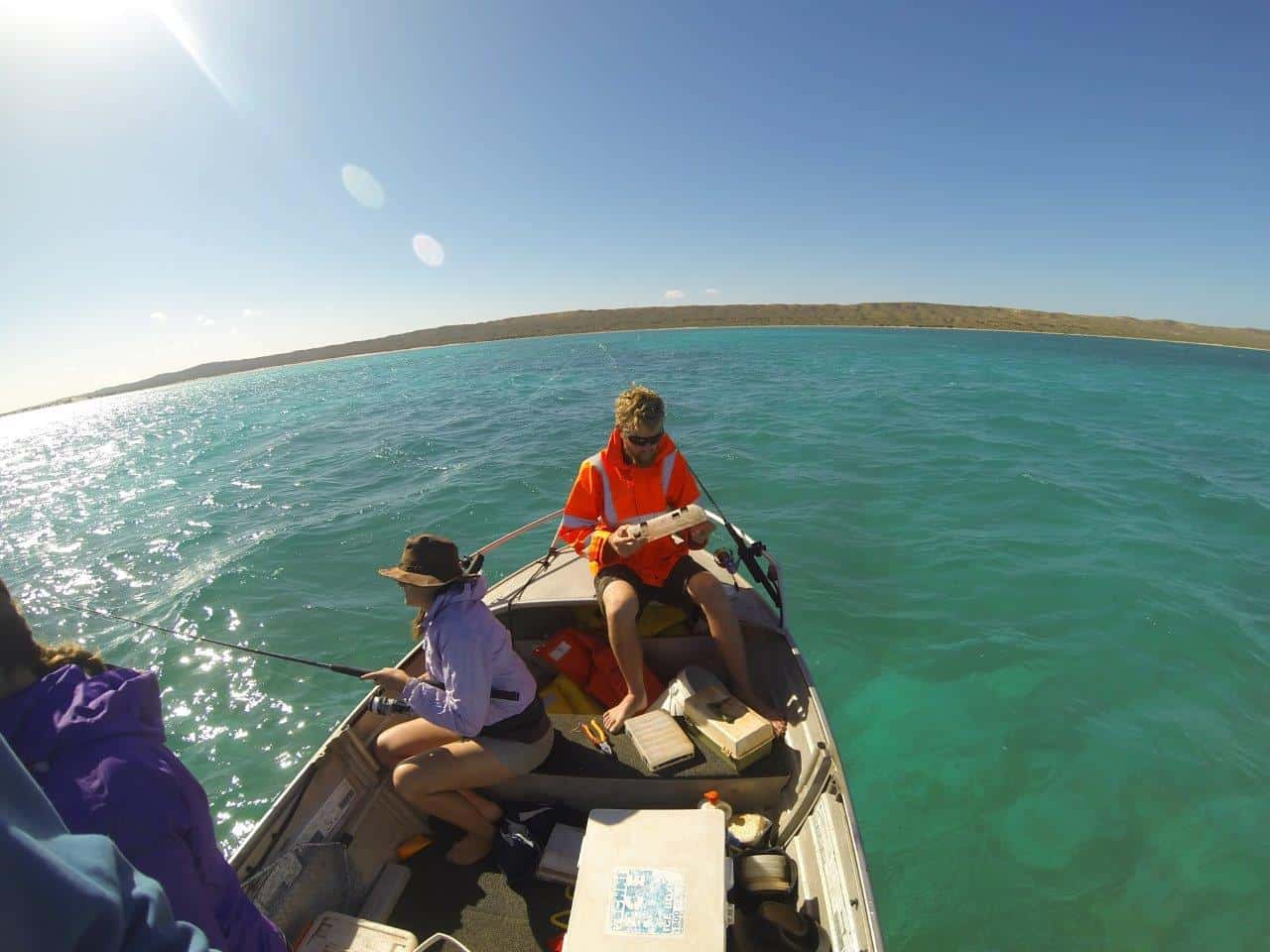 Fishing from our tinny at Ningaloo Station

Launching a boat at Ningaloo Station

If you have a small boat, you can drop it in just about anywhere at Ningaloo Station. A second vehicle is ideal to help pull you back up the beach, but the beaches should be calm enough when its suitable to head out.

Be very aware of the tides, and the pathway you are going to take though, as some parts of the station are extremely shallow and even driving a small tinny around is a mission without knocking the Reef, and doing damage to your boat and the marine world. We found North Lefroy was almost impossible to get out of in a small boat heading south because it was simply too shallow. 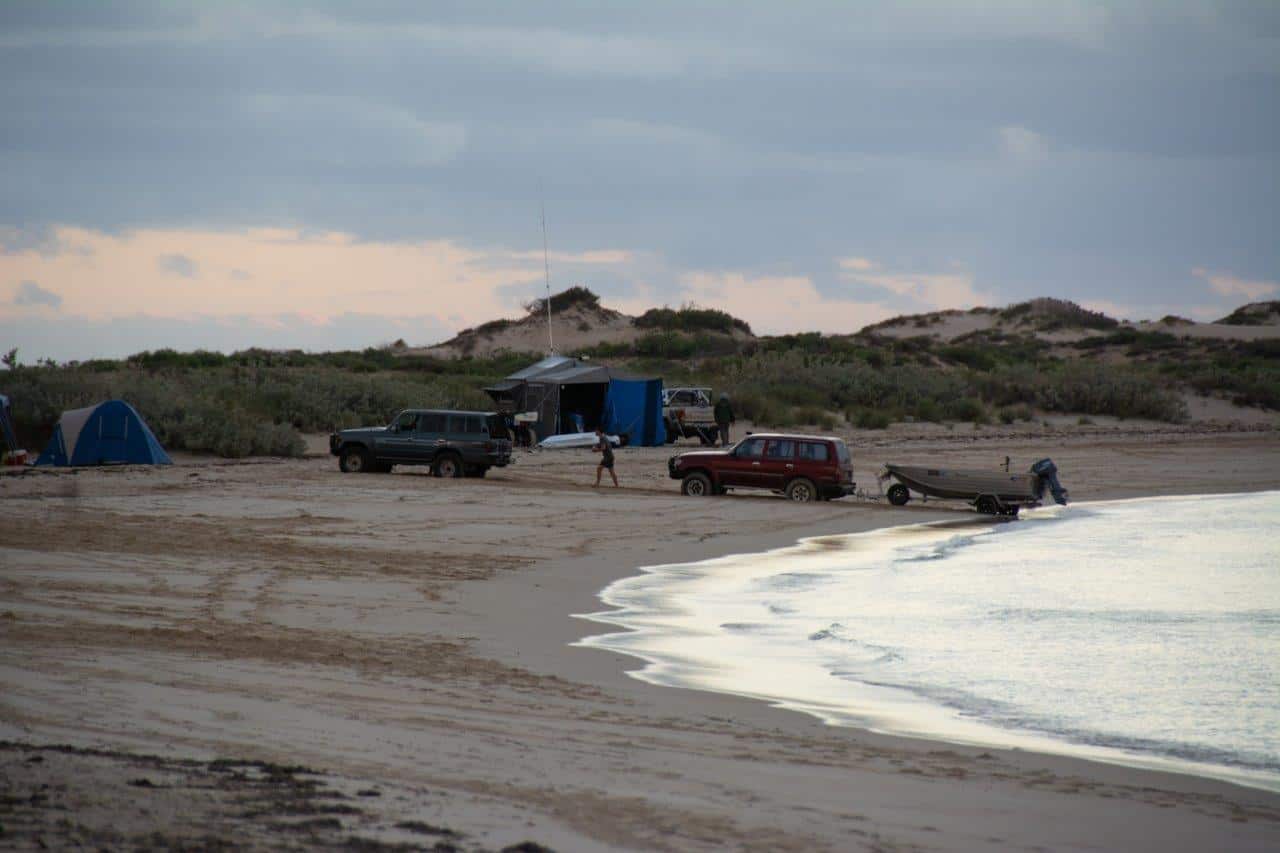 Can you bring dogs to Ningaloo Station?

Dogs are permitted as long as they are kept on a leash, and under control. 1080 baiting does take place, and I’m told birds move it around, so bring your 4 legged friend at your own risk. I’m not sure I would be prepared to do it.

You can have fires at Ningaloo Station, providing its in season, you bring your own timber in and you use a portable fire pit (no fires on the ground). You can’t collect timber from the area (not that there is any anyway!).

Is there a maximum stay at Ningaloo Station?

In the past, people would stay at the station for months on end. You’d get couples who would literally live at Ningaloo for 3 or 4 months of the year, with semi permanent setups like below. Since the DBCA took over though, its been capped at 28 nights and then you need to find somewhere else. It’s still more than enough time to have an amazing stay, but ensures the sites get shared a bit better with others. 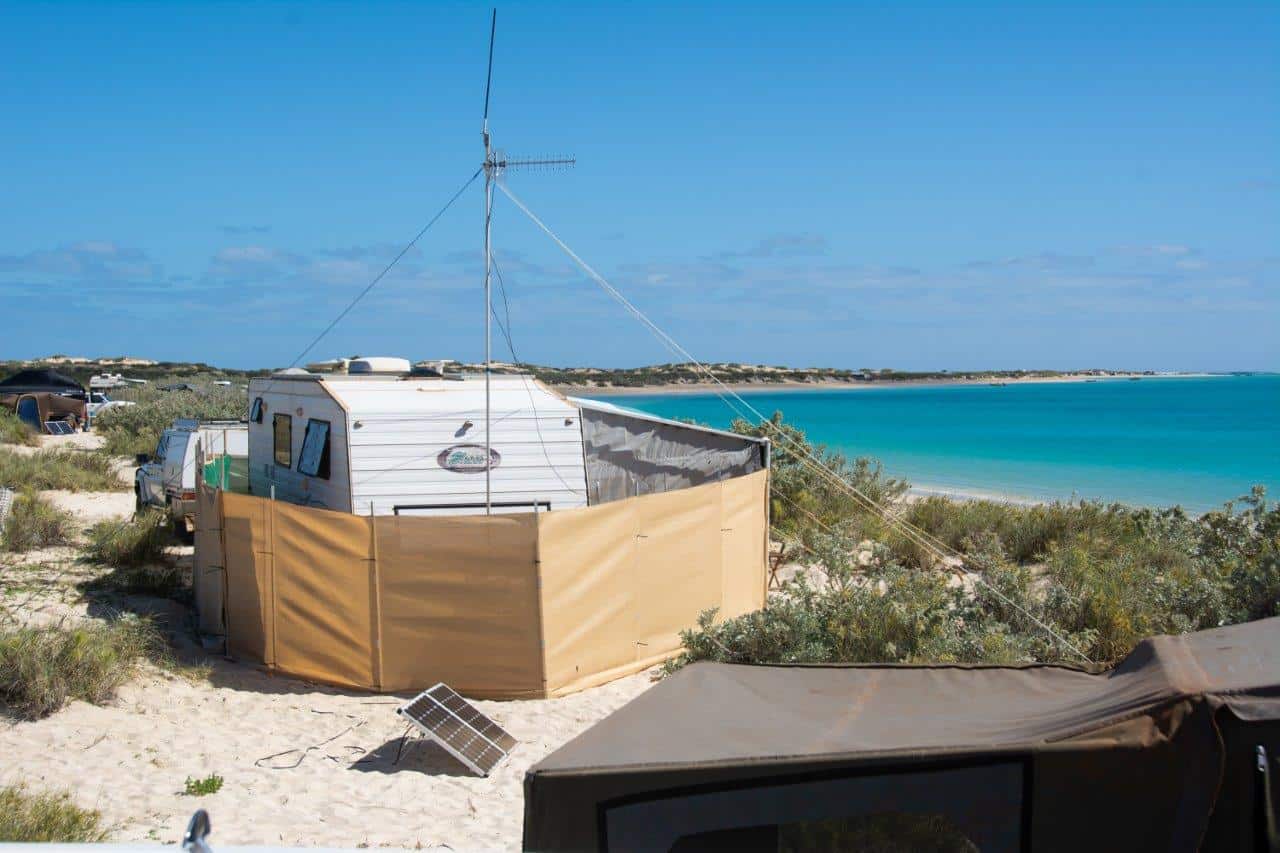 28 days is the maximum now; people used to stay for months on end

There are rubbish bins at the entrance to the station. You must take all of your rubbish out, and if the bins are full take it to your next destination with rubbish bins. I’ve seen people leave bags of rubbish near the bins, and this is a terrible move as the animals (particularly crows) will open and spread it everywhere.

Believe it or not, there are actually a number of alternatives to camping at Ningaloo Station. You can stay at the Caravan Parks in Exmouth, a couple of stations (including Bullara) on the Exmouth Gulf, or in Cape Range National Park.

South of Ningaloo Station you have Coral Bay (caravan parks), then Warroora Station, then Gnaraloo Station, Red Bluff, Quobba, Quobba shire camp and then Carnarvon. This region is incredibly popular in peak season, and getting a camp site can be a huge mission. 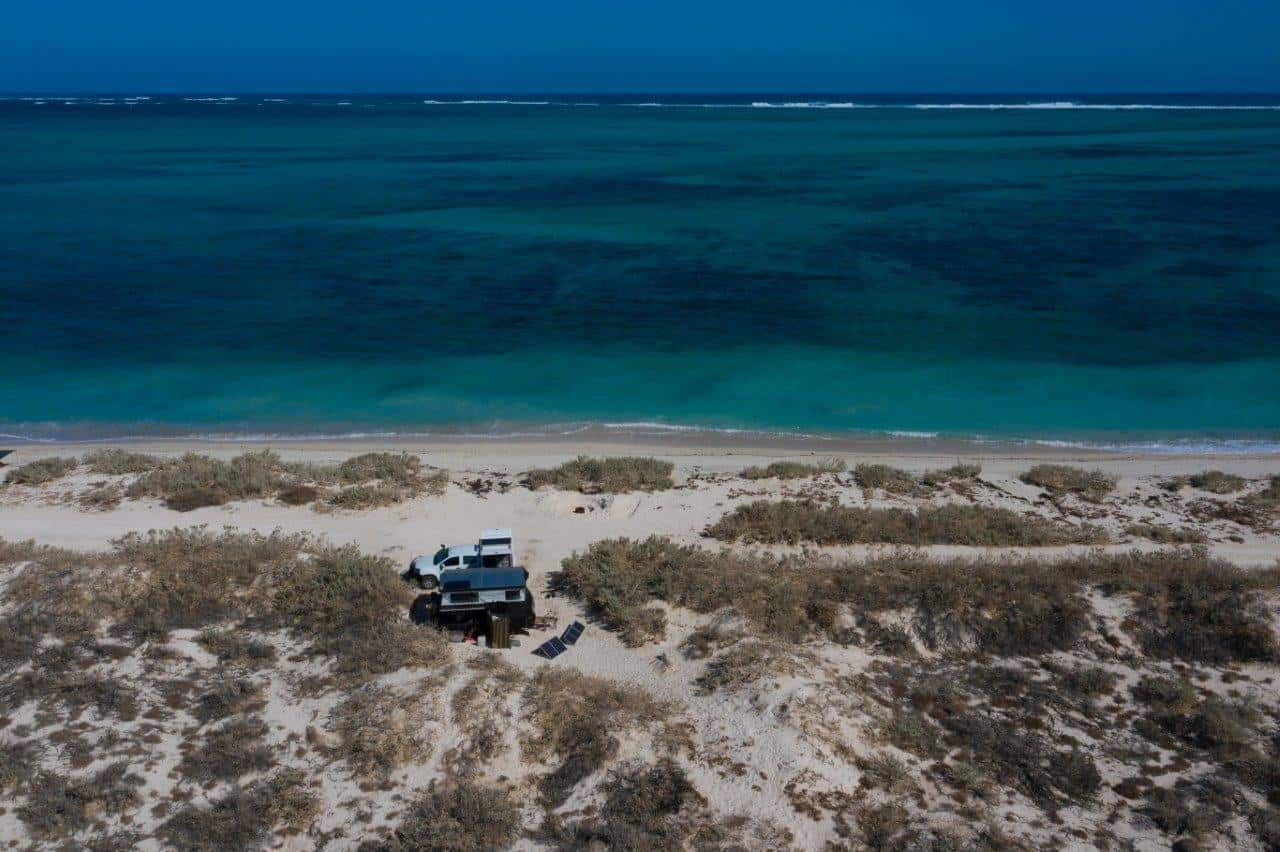 Warroora Station at 14 Mile is pretty amazing too