Using a weighbridge for our Camper and 4WD

After playing real life Tetris for the better part of a week, we’re fully loaded and ready to head off around Australia for a year or two in our 2016 Isuzu Dmax and Reconn R2 Hybrid Camper. We’re not new to the travelling lifestyle, and have done several hundred nights already in this camper alone, but we’ve never packed for such an extended trip, and its certainly provided some different challenges for not only space, but weight.

I spent a lot of time culling a heap of items, and whilst we could go further I feel we are probably in a pretty good place, or are we? 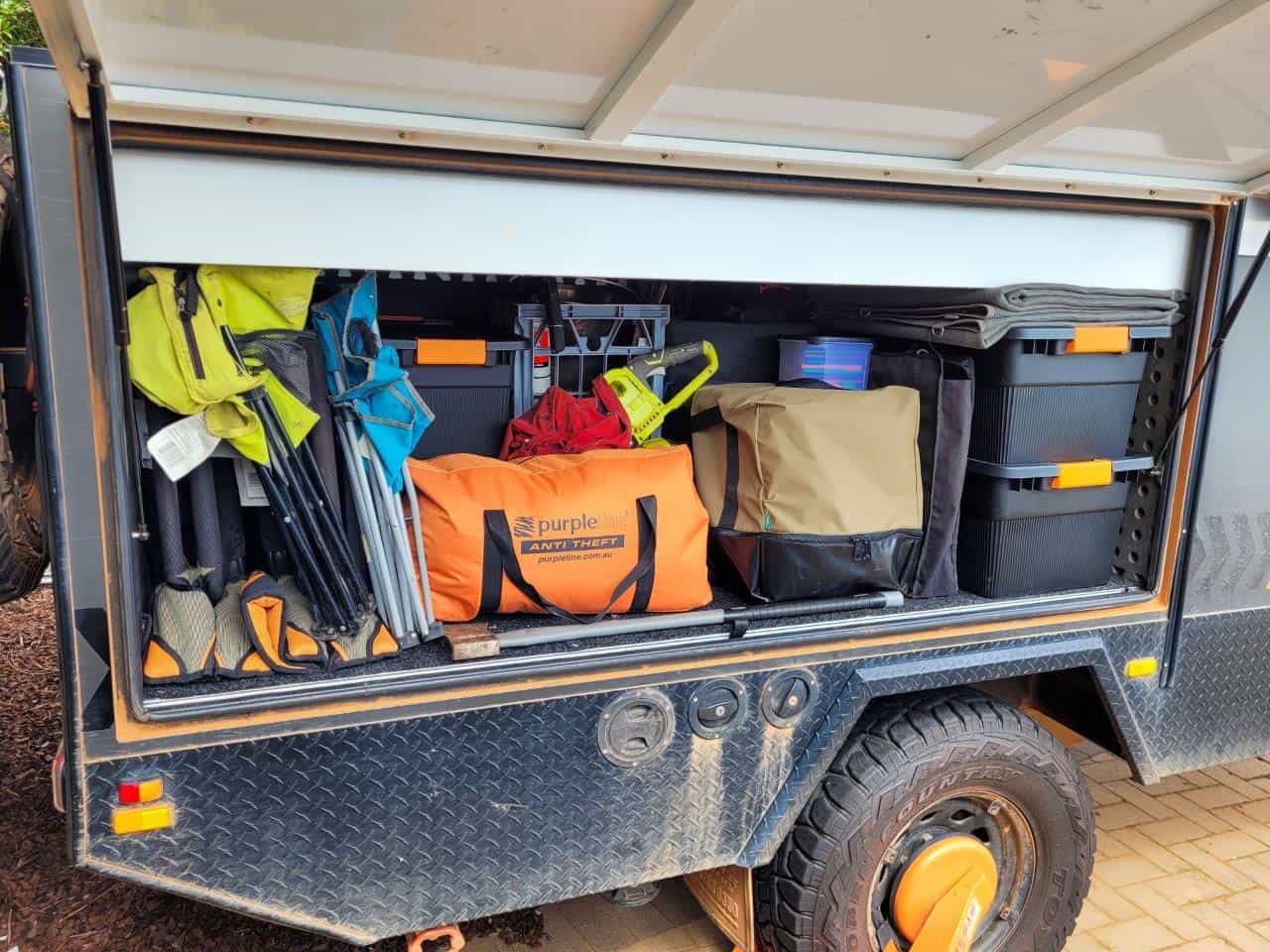 Our camper trailer, fully loaded and ready to go 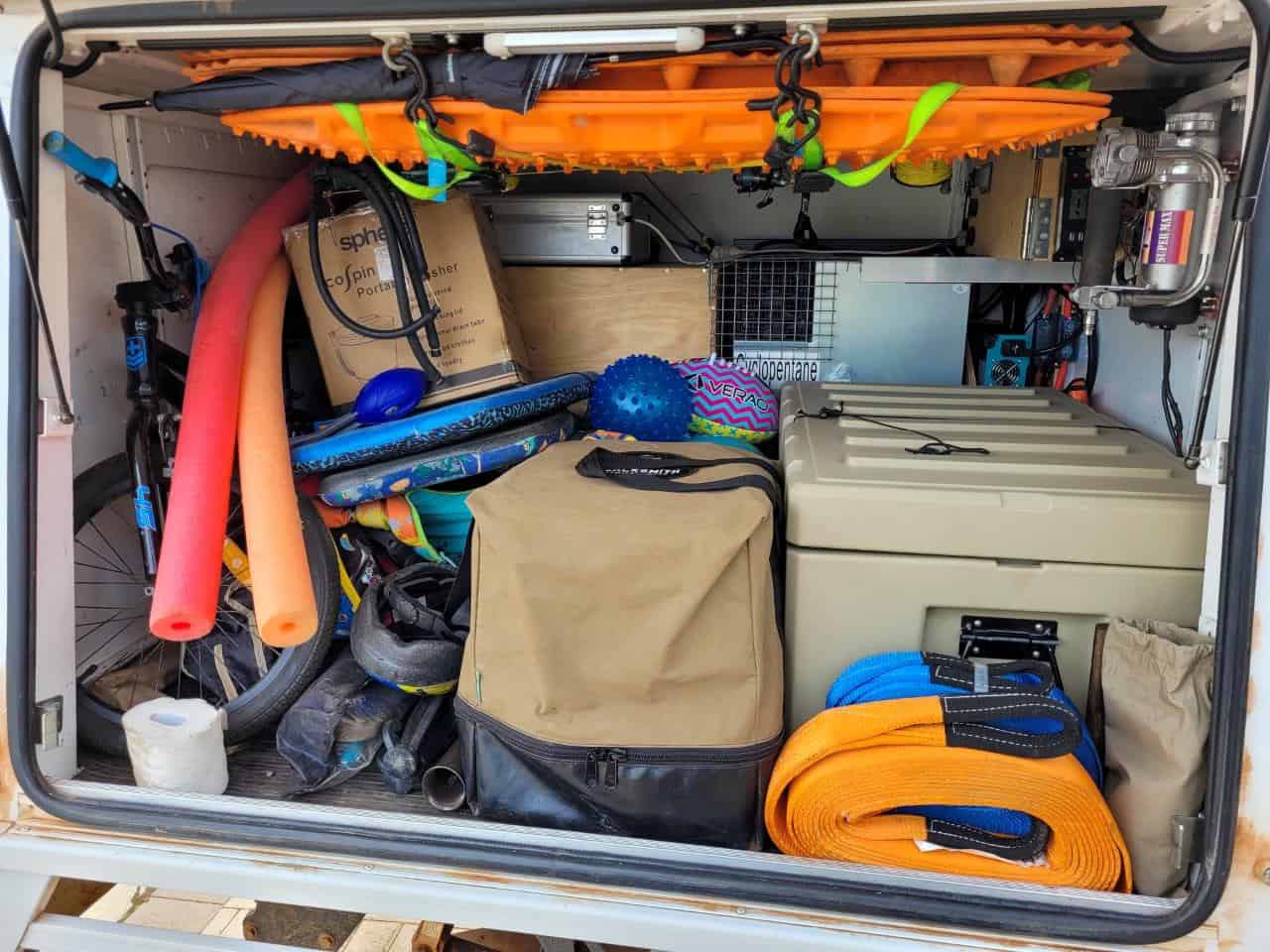 The rear of our Isuzu Dmax, ready for a lap of Australia

This is the one question that’s got me a bit worried. If you’ve been following us for a while, you’ll know we had our entire setup weighed by a mobile weighing company prior to a big 6 week trip and we came in underweight in all of the categories that you need to be, but some only just scraped in.

Are we heavier than then? I think so, but maybe not by much, and hopefully only heavier in the camper which we had plenty of space to move.

If you don’t know much about weights, there’s a lot more to know than just GVM and GCM, and fortunately we have a post that explains this very clearly, which you can read here; Towing Capacity; a simple guide to keep you legal.

If we are overweight, we’ll have to do some juggling around, and worst case start culling items that we think we can live without.

Tomorrow, we’ll hook the camper up for the start of the biggest adventure we’ve been on yet, and the first stop is a new weighbridge in Canning Vale that is open 24 hours a day, 7 days a week. It’s $40 to get your setup weighed, and its going to be interesting to see it all happen.

Whilst I’d have no issues using a mobile weighing service again, I want to do this one on our own, for cheaper, and see how its all going.

I’m trying to think back to how we packed for our 6 week trip up north, and know we’ve moved a heap of items around, ditched a fair bit of weight, and added some new gear in. We have far more clothes, a heap of school gear, an extra jerry can of fuel, a permanently mounted diesel heater, second toilet, rear awning, and a similar amount of food.

I’ve got no idea what the new tow ball weight will be, but know we can adjust it easily enough if needed. 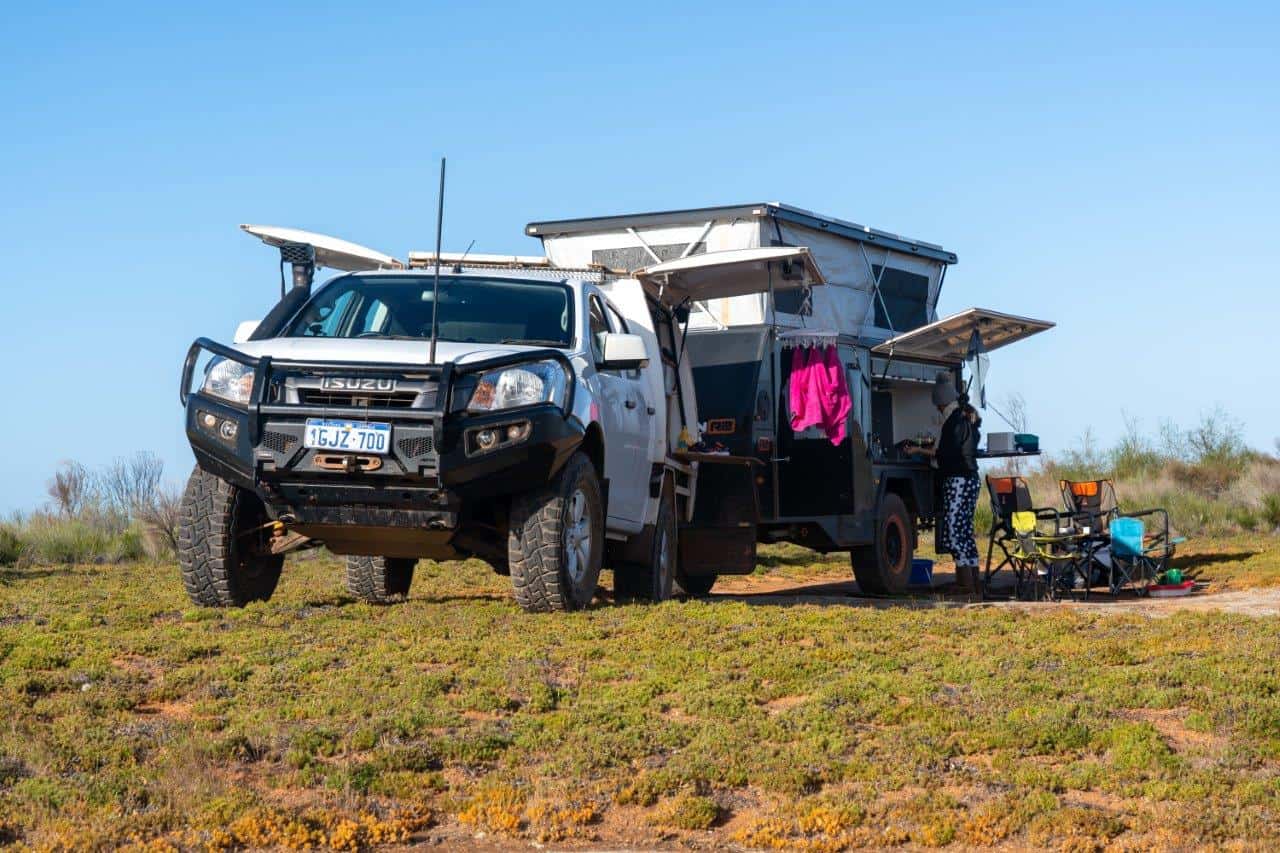 We’ve made a heap of changes to reduce weight, but have added extras too and have more gear for a year or more away

What weights am I worried about?

I’m most concerned about the rear axle weight on our Dmax. We’ll be fine for GCM and ATM, and should be OK for GVM but the axle weights are so easy to go over, especially on a dual cab Ute where a lot of your loading space is behind the rear wheels.

It’s imperative that we keep the tow ball weight low to ensure the leverage on the Dmax is limited (around 130 – 150kg would be perfect) and we don’t have anything in the Dmax that could be in the Reconn R2.

How did it all weigh out?

So, an interesting experience, and one that left me a bit frustrated, for two reasons. We were over, but also the automated weighbridge setup is not good for getting all the information you really need. Here’s the figures we got:

Tow ball weight – 160 or 180kg, depending on what you believe of the weighbridge’s two results

Rear axle weight – Unknown, as we weren’t able to weigh this

Front axle weight – Unkown, as we weren’t able to weigh this.

The auto weighbridge is frustrating

At first, I loved the fact that this weighbridge was close to home, and accessible 24 hours a day, 7 days a week. However, the more I think about it, the actual functionality can be quite limited. 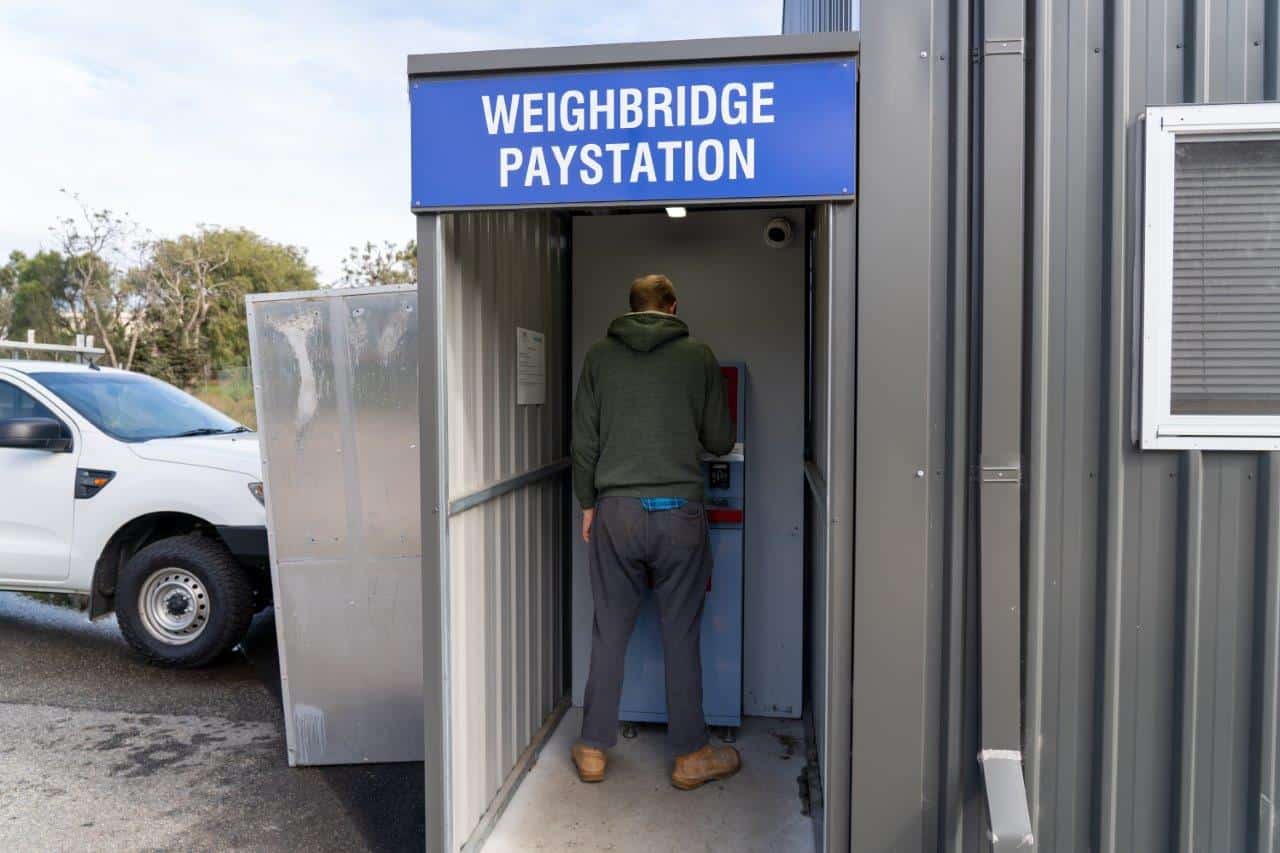 Using the 24/7 weighbridge in Canning Vale

I arrived, thinking I’d be able to get all the weights required, and we struggled. The weighbridge is a big unit, set up for weighing B double trucks, and is split into 4 sections. I parked up, and walked into the little shed to start the weighing process. The screen tells you to ensure that you are split on the different sections correctly, which we did.

I corrected the front number plate that it had picked up, and proceeded with the weighing for $40. It spits out a couple of pages, which just give you three figures – one for one section of the weighbridge, and one for the other, and the total. In essence, its giving you your GVM, and your trailer weight without the tow ball mass, and the GCM. What about your axle weights, GTM and your tow ball weight? 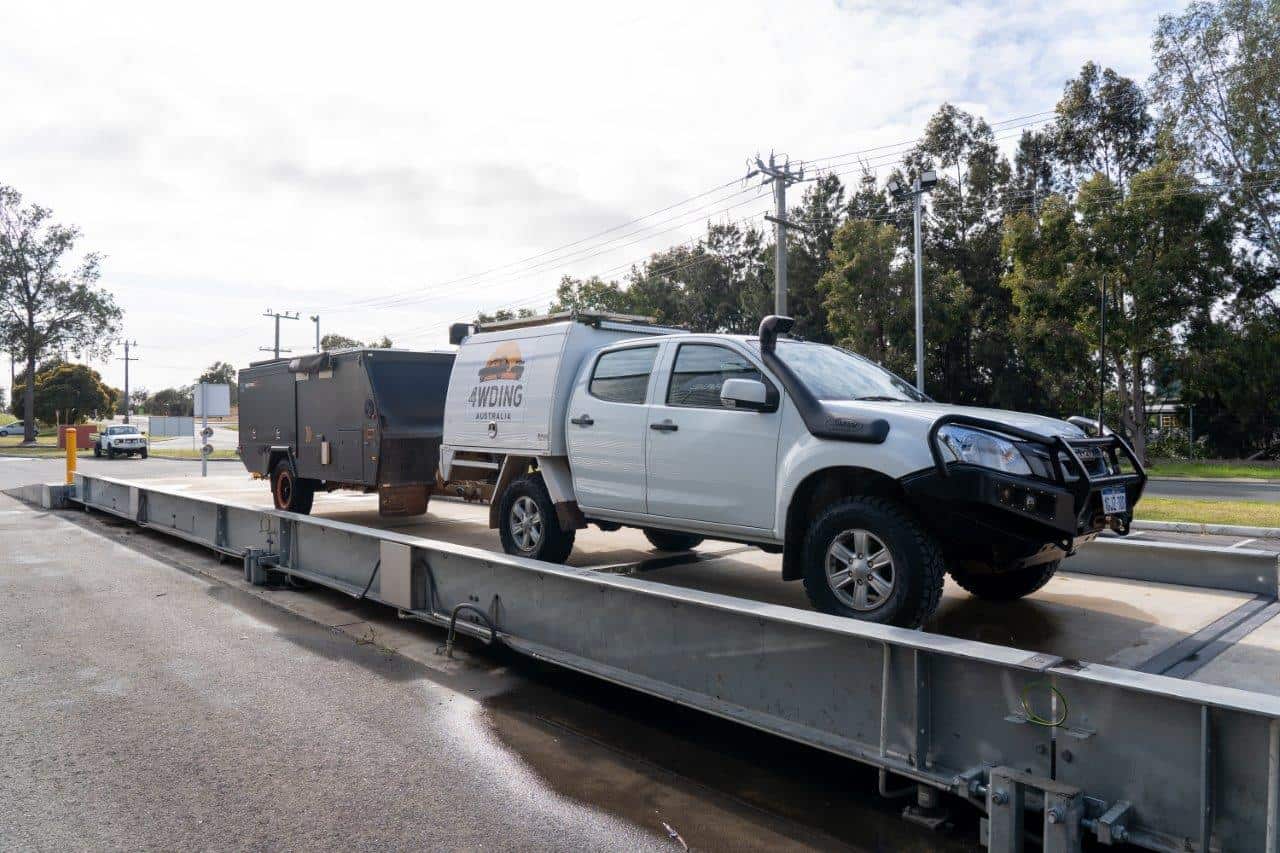 Parked up with our Isuzu Dmax and Reconn R2 Camper

Thinking I could weigh it again for free (as part of the original cost), I pulled on again, and unhitched the van, so I could see what the new read outs were, which would give you the tow ball weight. I got the new figures (and had to pay another 10 bucks), but noticed that the total weight differed by 20kg, which is impossible as its the same setup and same weight. 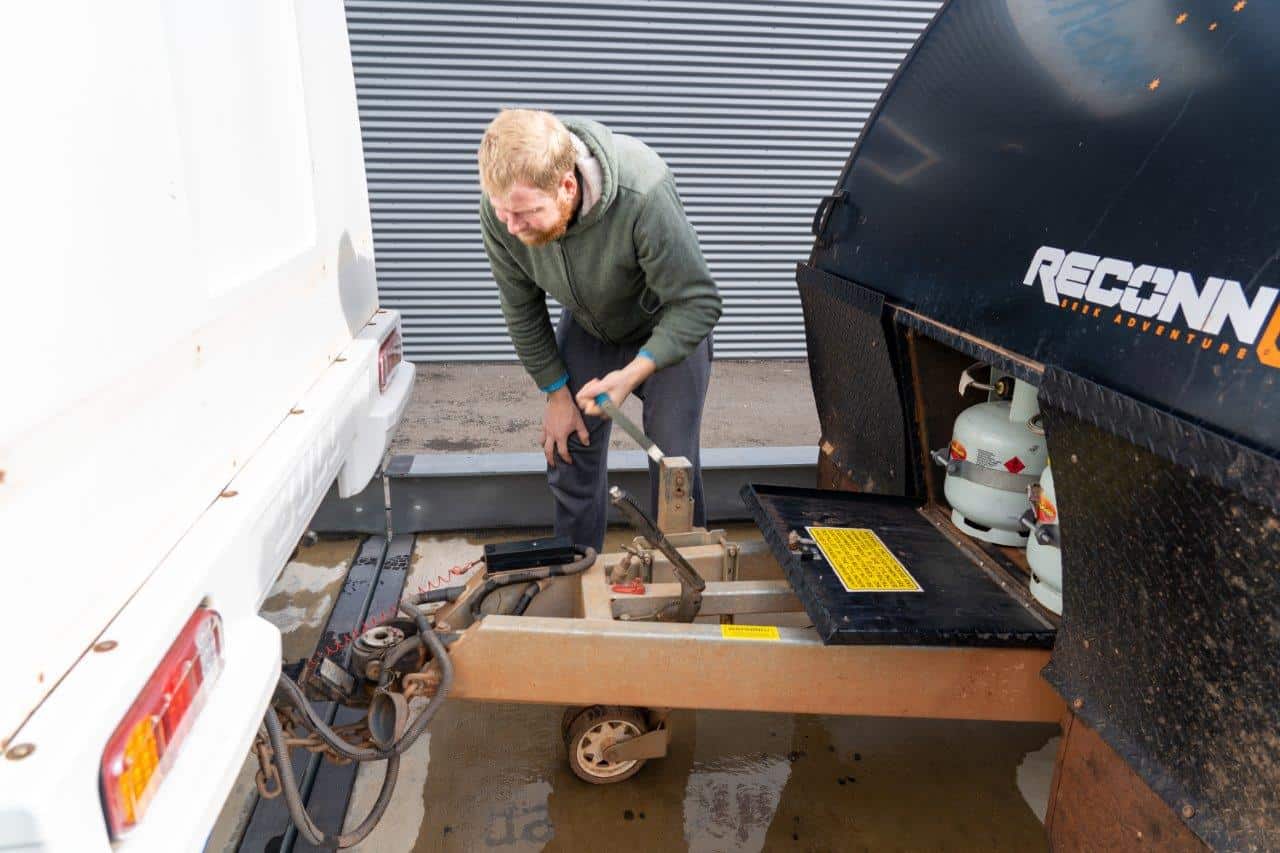 Unhitching the Reconn R2 to get the tow ball weight

I drove off, frustrated that I couldn’t get the axle weights, and that we were over. Thinking back, it *might* be possible for you park the front axle of the car on one pad, the rear on another and hopefully the camper wheels land on the remaining pad. It might work, but it would depend on the spacing of your setup.

The other thing that annoyed me was it specifically asks everyone to hop out of the vehicle to do the weighing. How are you supposed to get an accurate figure if people aren’t in the car? For GVM you can just add their weights, but for axle weights its impossible to get right.

In my mind you’d be far better off paying for a display to come live, so you can see what is happening in real time and get your print out later on. I guess for registration, and general weighing it works, but it sucks in comparison to a mobile weighing service, and at about a quarter of the price, I’m not sure its worth it.

What did we do about being overweight?

I mentioned above that the weighbridge showed we were 35kg overweight on our GVM. That means we were also over on one of the axle weights, as the front + rear axle weights make up the GVM to the tee with the Old Man Emu GVM upgrade.

At first I was quite annoyed at this, but its an easy fix. The tow ball weight can be reduced slightly, so we moved some heavier items further back (still within a metre of the rear axle). I also tipped out the 20L of flushing water that we had in our toilet in the canopy of the car, and moved a few extra items into the camper. This will make the camper heavier where we have plenty of weight, and reduce the weight on the Dmax which will also make it compliant.

I don’t like being so close to the limits, but what do you do? We’ll cull anything in the coming weeks that isn’t going to get used and it should only get better.

How would you normally use a weighbridge?

In order to get all of the weights that you actually need to know if you are compliant, you can’t just drive onto a weighbridge with your car and caravan, take a reading and drive off. You need to do that, plus weigh the car unhooked, plus the van unhooked, and get the vehicle axle weights individually too.

A bit of maths and you can get all the answers you need, but its important to take readings both attached, and detached from the trailer or you can’t work it out properly.

It’s a fair bit to remember, and if you are totally unfamiliar its really hard to get it right.

Get a mobile weigher in

Honestly, the money you spend to pay someone to come to your house, and weigh your setup when its loaded is so worth while. After seeing the 20kg discrepancy, I’m not sure I trust the weighbridge entirely, and if you are someone who isn’t full bottle on all of the weights, you’d really struggle to weigh it properly, and get the information you actually need.

A mobile weigher will come out, spend time explaining everything you need and generally allow you some time to move things around and get a better idea of what does what.

To be fair, if you know what you are looking at, and you have an accurate weighbridge that gives you real life figures it would be much easier, but the automatic system in Canning Vale left me feeling ripped off.

Have you used a weighbridge before? What was your experience like?