The Dmax gets a GVM Upgrade; what’s the choices?

Before buying the Dmax, I sat down and made a spreadsheet covering the accessories and modifications that I wanted to put on the 4WD, as part of building it into a comfortable, reliable and mildly capable tourer.

A GVM upgrade was never on the cards, but I’ve ended up with one.

About 2 months before our big 3 month trip up north I was getting into the swing of building the Dmax, and was thinking about the weight of everything in it. I made a decision to visit the local tip to check what it weighed.

With just the winch, AFN Bull Bar, aluminium Bull Motor Bodies canopy, a 45kg battery in the rear, baby car seat, a full fuel tank and myself in the vehicle it came back at 2380kg, which had be quite concerned, and that was without looking at the individual axle weights.

Keen to see the finished build? Here it is – Isuzu Dmax touring 4WD.

Lastly, if you want to know how much the build cost, check this out – Dmax build cost.

Adding the weight up

After weighing the Dmax, I went home and made another spreadsheet, carefully adding up the weights of everything that would go into the vehicle. The result, without the tow ball weight of our camper trailer was a further 645kg, taking the vehicle to 3025kg.

If you want to know exactly what the finished Dmax weighs, and what that comprises of, have a look at this; Isuzu Dmax touring 4WD build; a look into what it weighs.

What happens if you exceed your GVM?

Manufacturers give a maximum GVM for a reason; it’s only designed to carry so much. If you exceed your GVM, your insurance company can walk away from any claims because your vehicle was not roadworthy at the time of the accident. Beyond that, a heavy vehicle puts all sorts of excess stress on the components of your vehicle, and will cause issues over time.

In regards to the suspension though, its common to have a Dmax suspension upgrade for towing as they are simply too soft on the rear end (like all new utes) to tow anything with a heavy tow ball weight.

At this point, I was a bit annoyed; I’d made a spreadsheet in the past and thought the weights would be OK. I’d also bought bigger tyres, and had factored in the size lift I wanted in order to keep it all legal, and now a curve ball had come my way.

As the weeks passed, I rang pretty much every company in Perth offering suspension packages, and had a chat to them. I had originally decided I would run the old man emu springs from ARB, with the 600kg constant load springs for the rear. Knowing now that even if the springs would cope, I wouldn’t be legal anyway meant I had to explore the land of GVM upgrades.

The factory springs in every dual cab ute on the market that I know of will not carry a big load, and definetely no where near what the specifications say without major sag. The SX Dmax has the lighter duty springs, and I could see even with just a mildly loaded camper trailer and some gear on the back that the springs were no where near up to the job.

When installing a canopy on the back of a Ute, its super important that you think about total weight, how it is distributed and that you match the style of canopy to how you use the vehicle. We’d already purchased the aluminium canopy as it was the best choice for us, and had to roll with the punches. If you want to know more about canopies, check this out; Buying a 4WD Ute Canopy; the ultimate guide.

There’s lots of options out there for getting GVM, and sometimes GCM upgrades. Below is the research I did, and why I ended up going with ARB. That said, please know that a GVM upgrade takes your vehicle beyond its original engineering intentions, and you are more likely to break something.

Some of the GVM upgrades on the market today are getting a bit silly, and this is made well known when you have rear differentials snapping in half, or major catastrophic failures with ultimately were contributed to by carrying extra weight. If you need to increase your GVM by that much, perhaps you are better off starting with the right vehicle to begin with. Here’s two posts worth a read – GVM upgrades; how much is too much, and Is your 4WD really suitable, or do you need a truck?

ARB sell the Old Man Emu GVM upgrade which has a few different spring options, raises the vehicle by 30mm, has a 3 year or 60,000km warranty and you can buy spares pretty much all over Australia. The GVM goes from 2950 to 3220, giving you an extra 270kg of capacity.

Interestingly, if you add the front and rear axle capacities given by Isuzu, you get 3220kg, so ARB are staying in line with the manufacturers recommendations. This helps when it comes to aftermarket accessories and warranty issues. They have also suggested that 25mm is the optimum lift height due to wheel travel and CV angles.

Retail price is around $3400 fitted, and this reduces your towing capacity if towing at maximum GVM.

If you sell a the vehicle to another state, the engineering becomes null and void, and it needs re-certifying.

Lovells GVM kits are sold by a huge number of companies around Australia. I rang a lot of places, and got pricing between $4200 to $5200 fitted. No idea how it varies by so much, but there you go. The warranty is 3 years or 70,000km on the shocks, and unlimited on the springs.

This kit is supposed to lift the vehicle 50mm, raises the GVM to 3600kg (an extra 650kg of payload), changes the axle ratings and most importantly, still leaves you with a 3500kg towing capacity.

The Lovells kit also changes your GCM (Gross combination mass) to 7100kg, although I’m a bit suss about how this is being done, and think there may be some very upset people in the near future when the rules and regulations get a bit stricter.

Pedders Dmax GVM upgrade increases it to 3450kg, giving you an extra 500kg of payload. It does not increase your GCM, retails for about $3500, has a 2 year/40,000km warranty and there are a lot of stores around the country for spares.

I enquired about the lift amount and got various answers from different branches. Some suggested 30 – 50mm increases, whilst others said it is no lift at all. They also couldn’t tell me what rating springs would be run in the rear in kilograms.

I did get pricing from Dobinsons and West Coast Suspension, along with the various data, but can’t remember it off the top of my head, and to be honest pretty much dismissed it as soon as I was told it would lift the vehicle by 50mm, which is too much for the setup I had planned.

Who did it boil down to?

Having already committed to bigger tyres, and being limited to a maximum of 33mm increase in suspension lift, it came down to ARB or Pedders. I seriously considered Pedders, but the sheer size, engineering backing and availability of parts in Australia made the ARB GVM upgrade the better choice.

They were the smallest of GVM upgrades in terms of increase, but stick within the factory axle weight ratings, use good quality gear that I’ve been happy with in the past and are very reputable.

Getting the GVM upgrade fitted

ARB had to freight front springs from Tasmania over for me, and fitted me in with just 3 weeks before our trip was due to leave. Their service was absolutely flawless from start to finish*. I was regularly updated, clearly communicated to and even slotted in the fitting of a Safari snorkel while I was there.

I’ve bought things from ARB in Canningvale before (their old premises), and had good service, but this time around it was 10/10. I picked the vehicle up 2 days later, with all of the paperwork and was asked to bring it back in 500km to check everything was tight and good to go. This is part of the Old man emu warranty process, and even though we were running out of time I obliged.

* Whilst tinkering around under the bonnet, I found the air box was fairly loose, which seemed a bit strange to me. I grabbed a 12mm socket and extension, and found that the two rear air box bolts were finger tight.

The front one was tight, but for some reason not clamping it down properly. I removed the collar which seemed too big for the job, and checked the other two were the same length, then reinstalled it all with washers to space it out. I don’t know what was changed at the front, and its a shame that they forgot to tighten the bolts. Still, better to pick it up in the driveway than end up with a busted air box!

I should quickly mention that a friend pointed out my CV angles were a bit suss after the GVM upgrade. I purchased a Roadsafe Diff Drop kit from Coastal 4×4, and installed it in about an hour, which has lowed the angles a fair bit. ARB do not do this as part of their kit, but I reckon it really needs to be done. You can read about the diff drop here – Dmax diff drop installation.

Dmax’s don’t have the best reputation for strong CV’s, and having a bad angle definitely won’t help this.

As I type this, we are sitting not far from the Northern Territory border, with a 4WD that’s pretty well loaded, and a camper trailer that follows us around when we move spots. We weighed the vehicle before we left, and it came in at about 2900kg without the towball weight.

It rides well, and I’m pretty happy with it. I suspect that the front springs may be a little too high load rating, despite having a winch, steel bull bar, catch can, secondary fuel filter and bigger battery in the front. The car sits level, even when towing, which is fantastic. 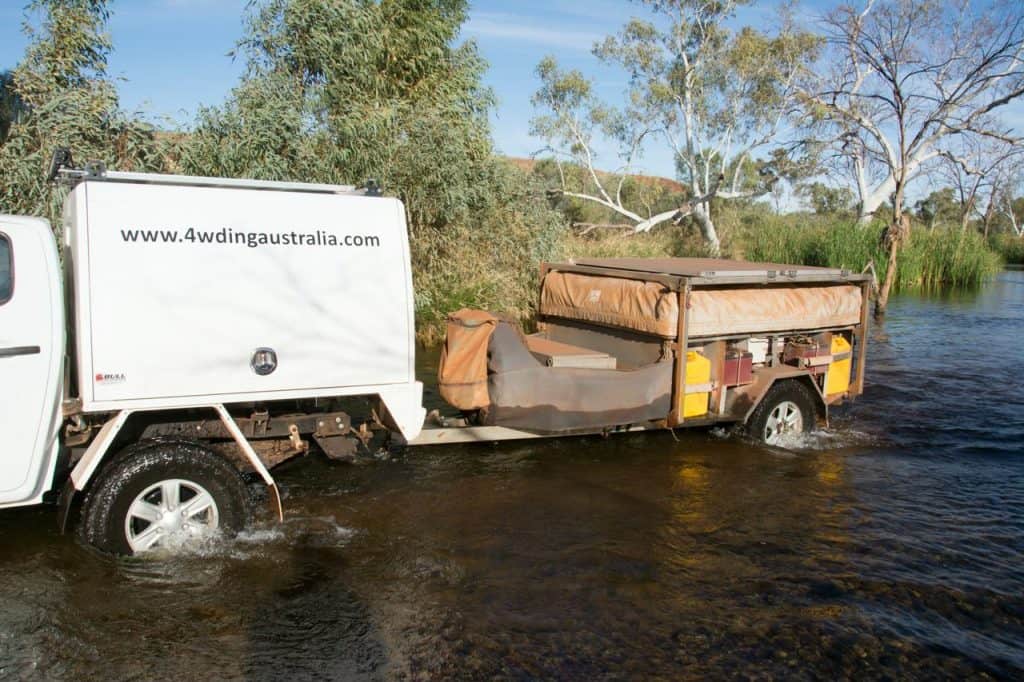 Travelling out of Kalgans Pool 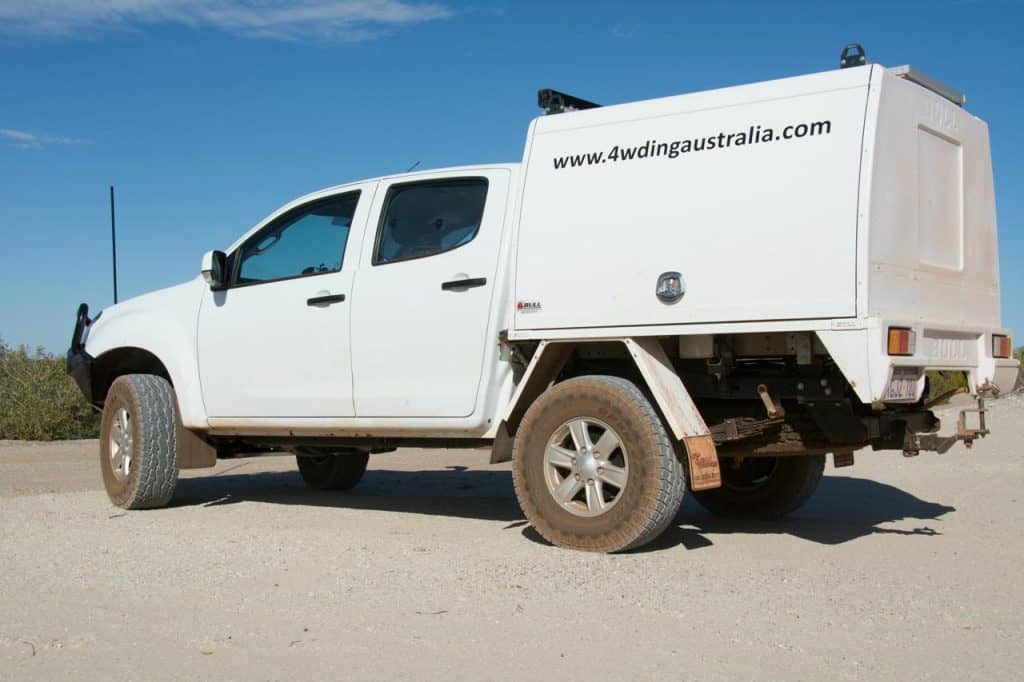 Loaded up without the canopy 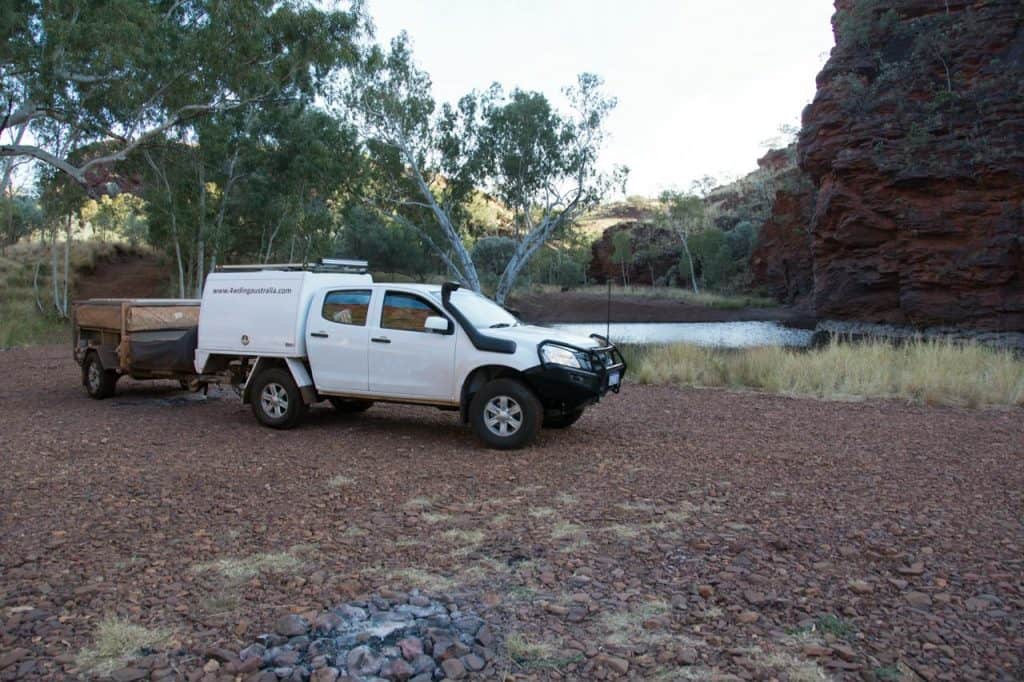 Sitting nice and level, legal and with decent clearance 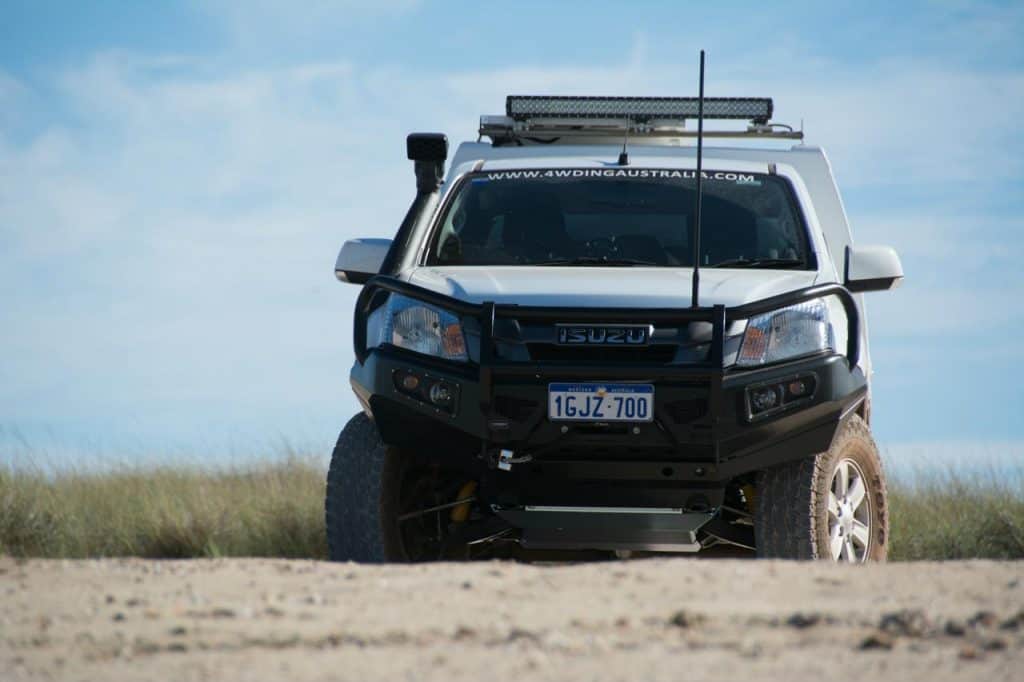 The front of the Isuzu Dmax