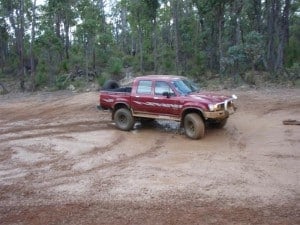 The 2.4 litre 22R Hilux has a reputation for being very reliable and extremely capable off road. Whilst the engines may not be very big, they are well designed and last for a long time. Many of you would have seen My Hilux, and know that I am very happy with the way it performs. These, along with the 2.8 Diesel Hilux are still commonly driven in Australia (and even used for remote touring).

The 22R Hilux was first manufactured in 1981 and the last was manufactured in early January of 1997. In between those years there were a number of different models, with the RN105R being the most common.

The 22R engine is a 2.4 litre carburetor petrol, putting out a whopping 75KW and 185NM of torque. Whilst this isn’t much at all compared to some of the modern engines in four wheel drives, you have to remember they are light vehicles! The engine life varies depending on how they are treated, but I have seen a number with over 500,000km on them and in the UK there are many with over a million km’s on the clock. I would suggest the average lifespan would be around 350,000km but it really depends on how the vehicle has been looked after.

The differentials in the 22R hilux’s are 4.875, and they run disc brakes at the front with drum brakes in the rear. The front hubs are manual locking, and four wheel drive is engaged by a small gearstick. The standard Hilux rims are -22 offset.

The 2.4 Hilux 22R 4×4 hold 65 litres of unleaded fuel, and will use anywhere in between 10L/100km to 15L/100km depending on where you drive it, how you drive it and the modifications you have fitted. Large tyres, and anything that adds weight or wind resistance to your Hilux is going to cost you extra at the bowser.

The kerb weight of these vehicles is only 1530kg, meaning it is significantly lighter than most modern four wheel drives. They sit at 1805mm high (for those contemplating lift kits!). 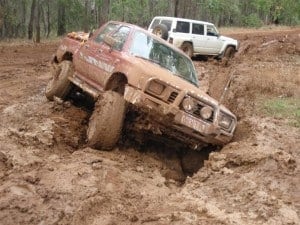 The closest I have come to rolling

These Hiluxs are often referred to as Rolluxs, because of their so called tendency to roll. They are quite a tall vehicle in comparison to the width, and coupled with springs that sit on top of the differentials you get something with a reasonably high centre of gravity. However, I have never had an issue and providing you drive sensibly you shouldn’t either! They certainly wouldn’t be as bad as a Toyota Troop Carrier!

These vehicles run solid front and rear axles, with oversprung leaf springs. This means that the leaf springs go over the top of the differential and not under it (oversprung provides significantly better clearance). From 1997 onwards, the vehicles changed to independent front suspension (and the SR-5’s had it all along from memory).

The 22R is a relatively simple engine, and the car as a whole is very reliable. The engine is chain driven, meaning you shouldn’t ever have to worry about changing it. There are no common problems associated with these vehicles, but they do require the standard maintenance. The more you modify these though, the more problems you will have. For example, if you fit 35’s on then expect to break CV’s very easily if you drive it hard.

How tough are they?

These Hilux’s are known as ‘unbreakable’ in their standard form. Of course, when you throw a v8 in them you are going to break things but in general they are extremely reliable. I have seen these get abused many times and they just keep coming back for more. Have a look at the video below, and you will see what I mean.

Towing with a 22R Hilux

I mentioned above that these aren’t the most powerful engines out there, and it applies here for sure. You can tow trailers and boats that aren’t too heavy, but if you are looking for a full on tow vehicle the 22R isn’t it! I use mine for towing every now and again, and wouldn’t want to use it as a daily tow vehicle. 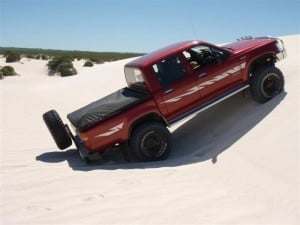 Playing in the Sand dunes at Lancelin

Beach Driving with the 22R

Being so light, these vehicles go very well on sand. Low range is usually preferable if the sand is soft, and with your tyres let down in between 12 and 15PSI you shouldn’t ever have any dramas on the beach. You may have a few difficulties getting up big dunes, but this isn’t something that needs to be done very often (and you can just let the tyres down even more).

No doubt you will have heard of a number of people putting different engines into their Hilux’s. Common conversions (unleaded only) include:

Asides from an engine conversion, the 22R can be modified from carburettor to fuel injected, simply by adding a few bits and pieces. A number of the Toyota Coronas (and Celica’s if I remember correctly) were sold with a 22RE (fuel injected version) and you can simply bolt a few of their parts onto your 22R to make it fuel injected. Of course, please do some thorough research into this; I haven’t done a huge amount of research into it! 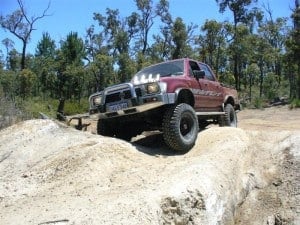 What tyres can you run?

A lot of people like to put larger tyres on their Hilux’s, which is entirely possible depending on what you want to do. I would suggest some decent research is put into this, as the body shapes will vary and you may not be able to do exactly what others have done. In saying this, I am running 33”x12.5” tyres on My Hilux with a 2 inch body lift. Something to remember is that these Hilux’s have very small differential pumpkins, meaning they have extremely good clearance. If you measure from the ground to the lowest point on a Hilux and compare it to a Patrol or Land Cruiser you will find that there is usually around 25mm more on the Hilux. When you see the big Patrols and Land Cruisers running around on 35’s, you would comfortably compete with them even if you were only running 33’s!

Again, a lot of people lift their Hilux’s, which is fine assuming you do it sensibly. I see a number of Hilux’s driving around with 4” lifts, which in my opinion is excessive. The lower the centre of gravity, the better your vehicle is going to be off road and you can fit larger tyres without a big lift anyway. I would suggest a 2” body lift or 2” suspension lift is a good medium.

One of the easier ways to fit larger tyres is to move the front differential forward. The rear usually has plenty of clearance, but you will find the tyres rub on the inside of the front guards. To avoid this, you can move the front diff forward 35mm by purchasing new leaf spring perches. You will have to also purchase an adjustable steering arm. A lot of people move the diff forward simply by drilling out the spring perches 35mm forward, but it is not the strongest way to do it.

A Body lift on these Hiluxs is simple to fit. Please consider any bar work you have before you do the body lift though – as it will stay in the same place and mean you have a gap in between the body and bars. Most of these Hilux’s have sidesteps that bolt to the body so this isn’t an issue, but for the Bull Bar and rear bar you may be up for some serious modifications to make it fit properly! Asides from this, the Body Lift is easy to fit and is a cheap way to get a bit of extra clearance for those tyres! Have a look at the post I wrote on Hilux Lift Kit for more information. 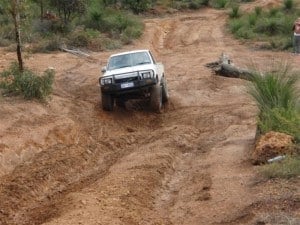 A small suspension lift in action

A Suspension Lift is another way to lift your vehicle, but you will find for fitting larger tyres they will still touch when you flex the wheels up. Be sure to get the right lift kit too, as many will simply fit a generic lift that may not suit what you want. A good suspension fitter will ask what you do with the vehicle, and then fit the right springs for load carrying, flexibility or comfortable ride. I have seen many Hilux’s with huge packs of leaf springs and the owners never carry heavy weight around. This makes the ride very uncomfortable, and it is entirely unnecessary. Have a look at the post I wrote on Hilux Lift Kit for more information.

Extractors on the 2.4 22R are generally considered a good modification. They help the engine breathe better, and you will get an increase in both power and economy.

Of course, then you have the more common modifications; bull bar, side steps, rear bar, tyre carrier, work lights, rear drawers, roof racks and the list goes on….and on….

Converting the 22R to LPG

My Hilux runs on LPG (and I have around 120L of LPG on board along with 65L of unleaded). These engines will use in between 18 – 20L/100km on LPG, but its still considerably cheaper than running the vehicle on petrol. I am very happy with my LPG Conversion, and you can find out more information at the LPG Conversion post I wrote. 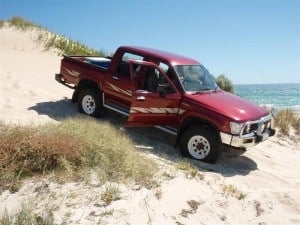 My Hilux before modifications

Four wheel driving rarely needs massive amounts of power (unless you are towing something). Sure, on the beach and in the mud it helps but you can easily get away without the extra ‘oomph’. As long as you understand this, any of the solid axle Hilux’s are great vehicles to own. I am very happy with My Hilux, and don’t plan on getting rid of it any time soon.

Please take your time when modifying these Hilux’s. There are regulations and laws that need to be considered, or you can end up in some serious trouble. What I have provided is just a basic overview – there is a lot of fine detail that I have skimmed over. Have a look on the 4×4 Forums and you will find a wealth of information to ensure your accessories and modifications are done properly.

If you have any questions regarding these Hiluxs, please leave a comment below and I will reply as soon as possible.