From the get go, I was hugely impressed with the move from a 12V chest fridge to the Bushman Upright fridge. Upright fridges have so many benefits that its hard to imagine going back now, for the most part. If you want to know more, check this out – 12V Upright vs chest fridge.

The thing is though, I’ve not been entirely happy with our 85L Bushman Upright Fridge, and finding that the fan cooling the condenser has a missing blade, and is jammed shut in the middle of a trip up north in summer made for another pretty frustrating discovery.

If you have a Bushman Fridge, you should check the clearance of your fan! 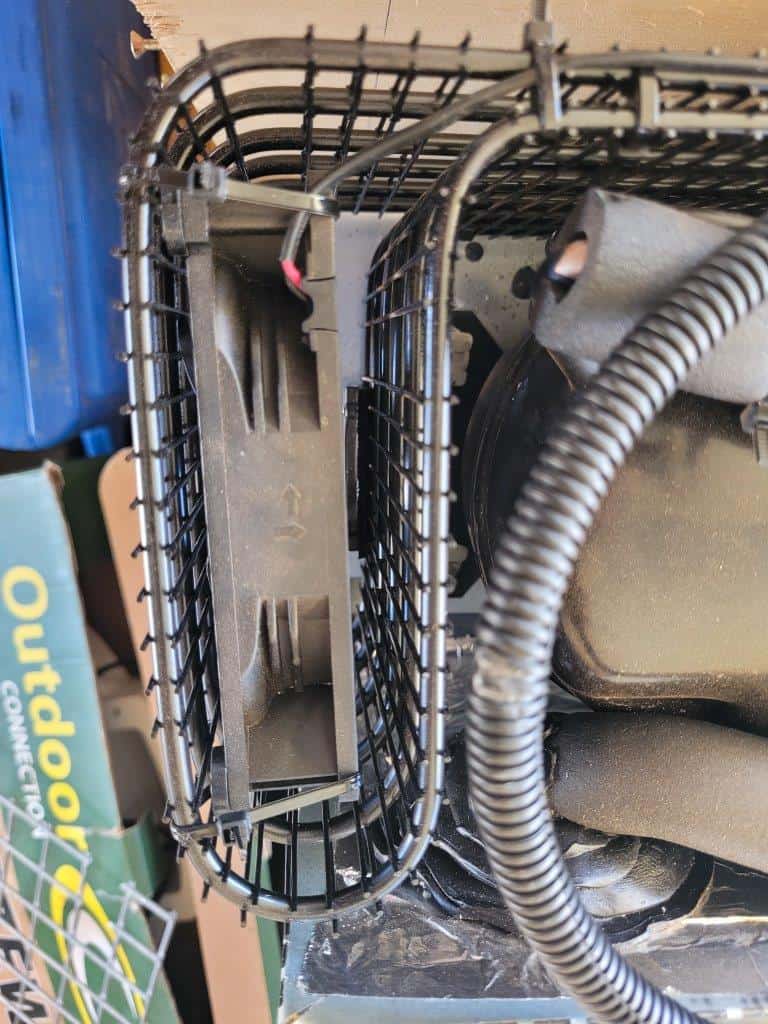 If you haven’t read our Bushman Upright Fridge Review, you can do so, by following the link, but in it we mention that we’ve had significant frosting difficulties with our Bushman from the get go, and it seems like its not too uncommon when the weather is hot, or humid.

On our last trip though, we left Perth in late January, set for a number of 40 + degree days of bush camping, and then ending up at Horrocks Caravan Park.

Not long after arriving, I had a look into the canopy to check the battery voltage, and noticed it was sitting at 12.3V, which is seriously unusual for a late afternoon battery voltage, with a panel that normally kills any consumption.

I had been wondering how the Bushman fridge would go in the extreme heat, and had been leaving the canopy doors open as much as possible, to aid with air flow. However, I noticed that the fan on the rear of the fridge wasn’t spinning, and thought back to a couple of days ago and couldn’t remember it turning then either.

I looked up the manual, thinking it might be on some sort of thermostat, but it makes it very clear that the fan should run all the time. Lovely. A better look from the back revealed a bigger problem; the fan was physically jammed in the condenser, and one of the blades had snapped off. 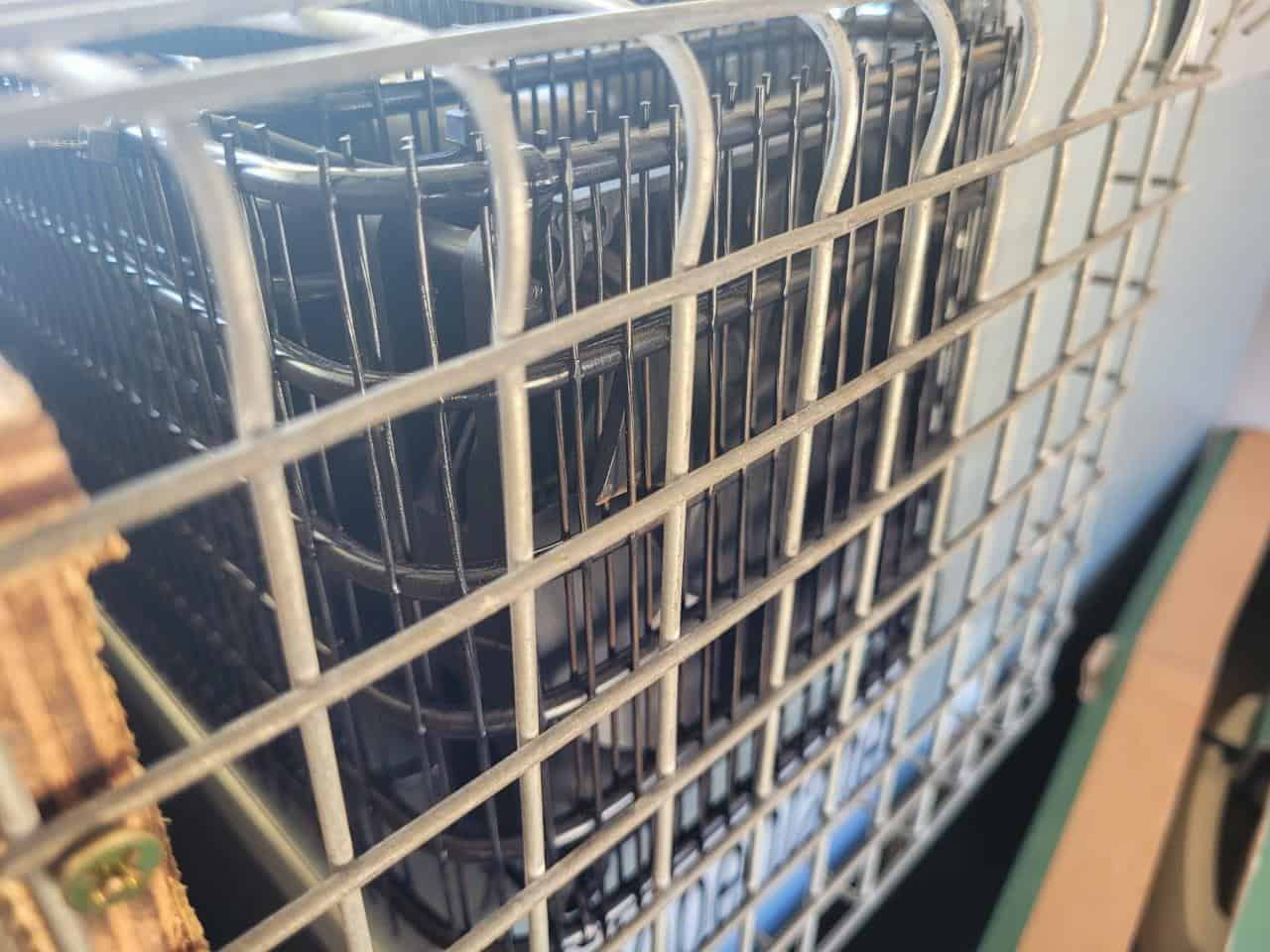 One blade broken, and one jamming the fan in the condenser

Now, this setup had been running for at least 3 days like this, plus any previous trips for who knows how long. Thinking back, I recall finding a piece of black plastic in the canopy and not knowing where it came from, so its been this way for some time.

Further investigation revealed that the fan is literally cable tied in place, and spaced off the condenser with some plastic washers, which are about 3mm thick.

I suspect that the fan was installed too close to the condenser, and its just moved forward marginally and grabbed the condenser, snapping the fan blade off and then jamming it.

I removed two of the cable ties and got it running again, but being out of balance from the missing blade meant it shook the entire condenser pipework around, which I wasn’t happy with.

I removed all of the cable ties, and mounted the fan on the independent cage further back, so its shaking wouldn’t be transferred to the fridge itself. 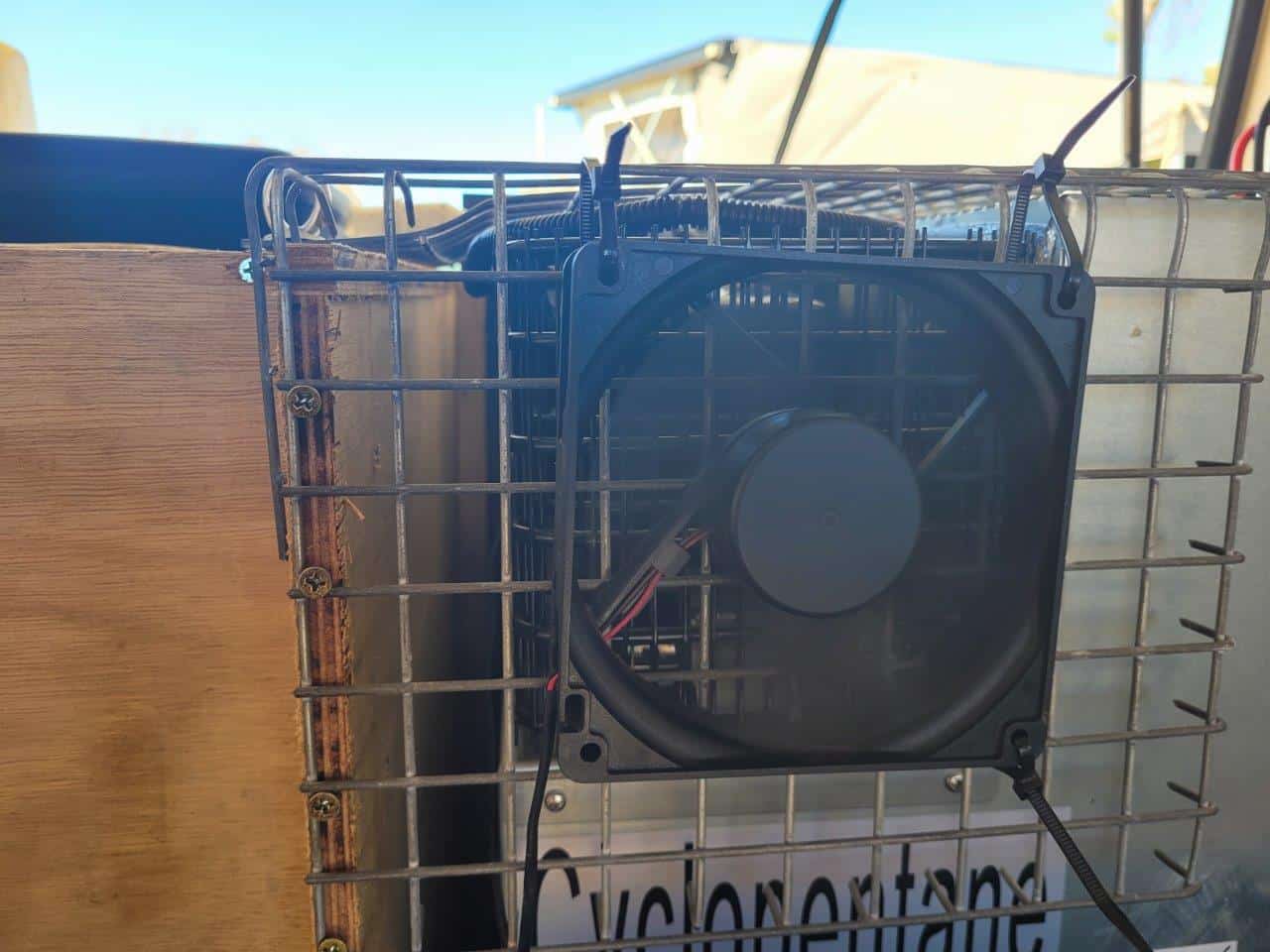 Running the unbalanced fan off my guard, outside of the fridge

Finding this mid way through a 42 degree day, and then spending quite some time trying to find a solution inside my warm canopy was a pretty sure fire way to wind me up, and I was already extremely annoyed by the inconvenience.

We literally live out of our fridge, and while it would never be life threatening, there are instances where it could be more than just a major inconvenience.

If you were camping in the middle of the bush, miles away from anyone and your fridge failed you’d have some interesting decisions to make!

I spoke to Bushman, who were quite helpful. They did suggest something could have been stuck into where the fan runs and done the damage, but it had a mesh guard around it and we keep it nice and clear. He agreed to send a new fan over straight away, without asking how old the fridge was, or for any receipts or anything like that.

We had another conversation about the frosting up, and he said it was unusual to have frost in 2 weeks, but when he heard it was running on setting 4 he agreed it was probably running as normal, and just frosting up from being opened up regularly (as you do when you live out of the fridge).

Overall, a bit annoying, but it didn’t really cause us any major issues except for lost time, and we’ll see how it goes long term.

Asides from being awkward, swapping the fan over was actually pretty straightforward. As my fridge is permanently installed, it was quite awkward to reach in and unplug the two connectors, and get them back on again. 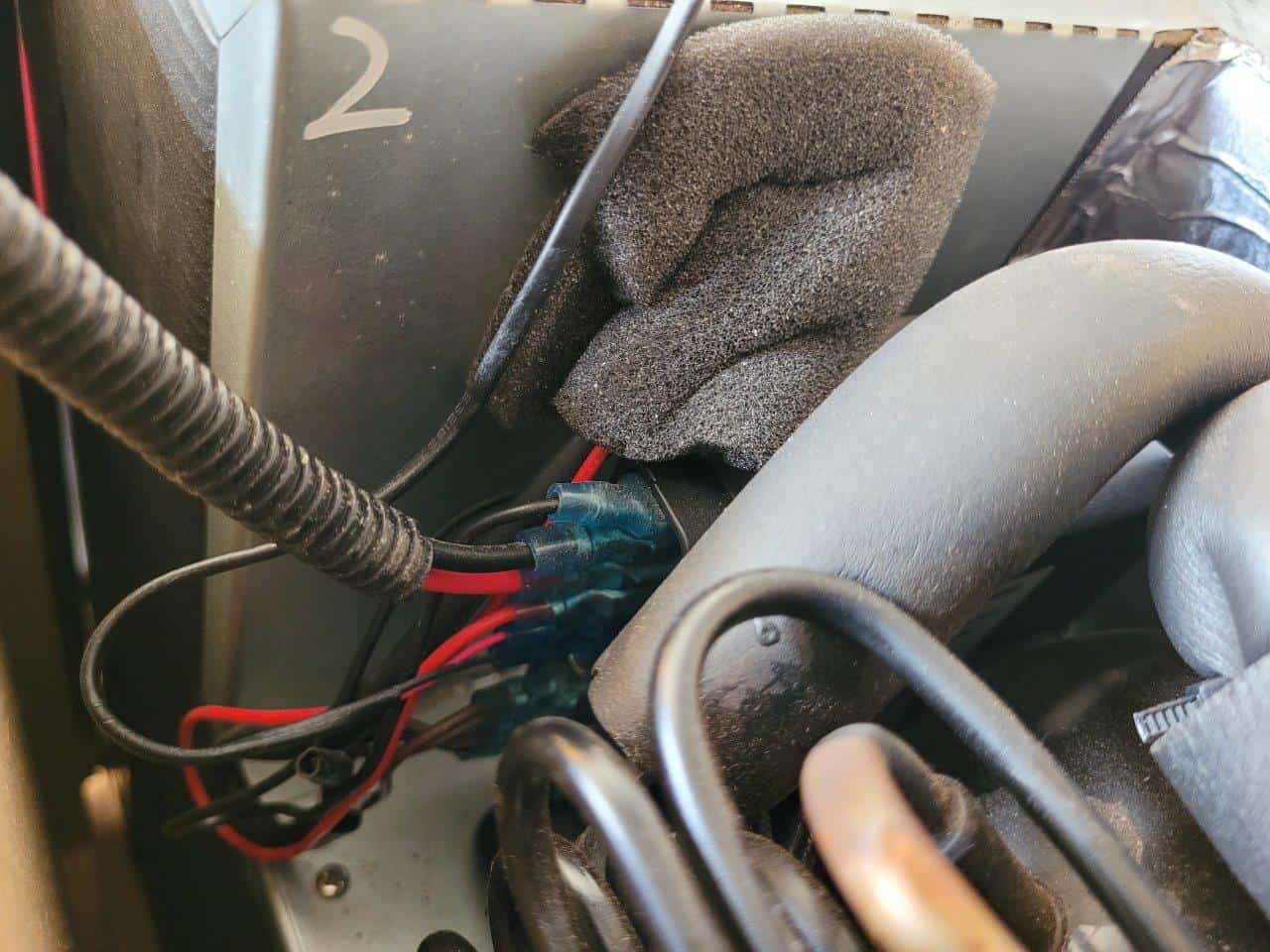 Unplug two connectors, remove the fan and reinstall the fan with the spacers in the right spot

Make sure you take photos, and look very clearly which lead goes where, as mixing them up will result in a fan that does not work. As it turns out, I managed to put both on the lower 2 tabs, when they should have been on the upper 2 (I couldn’t see one that was hidden) and it took me a while to get it to work! 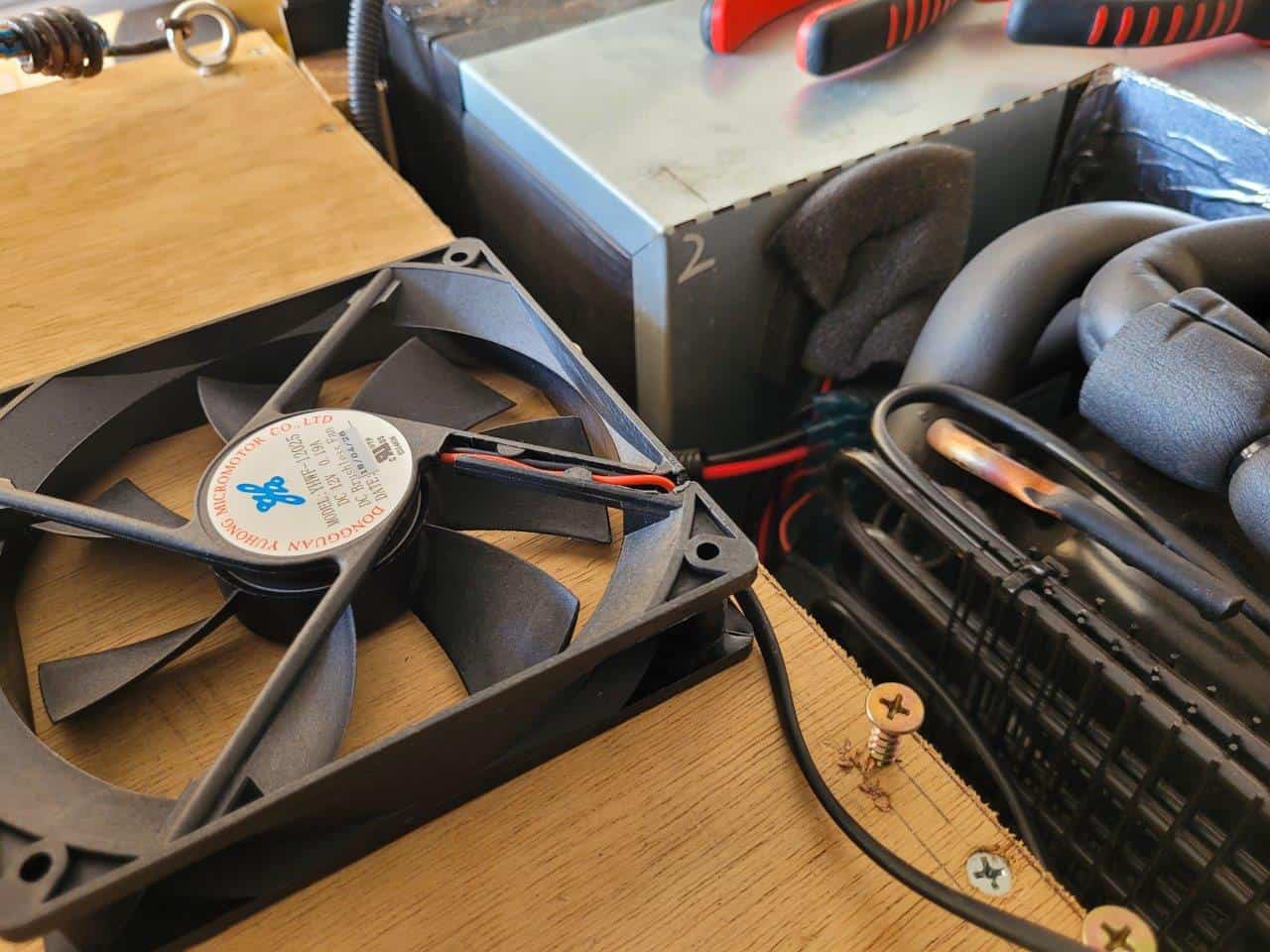 I’ve installed the fan with two spacers at the bottom on one side, and two on the other side, so the fan is kept away from the condenser, and won’t get stuck again. 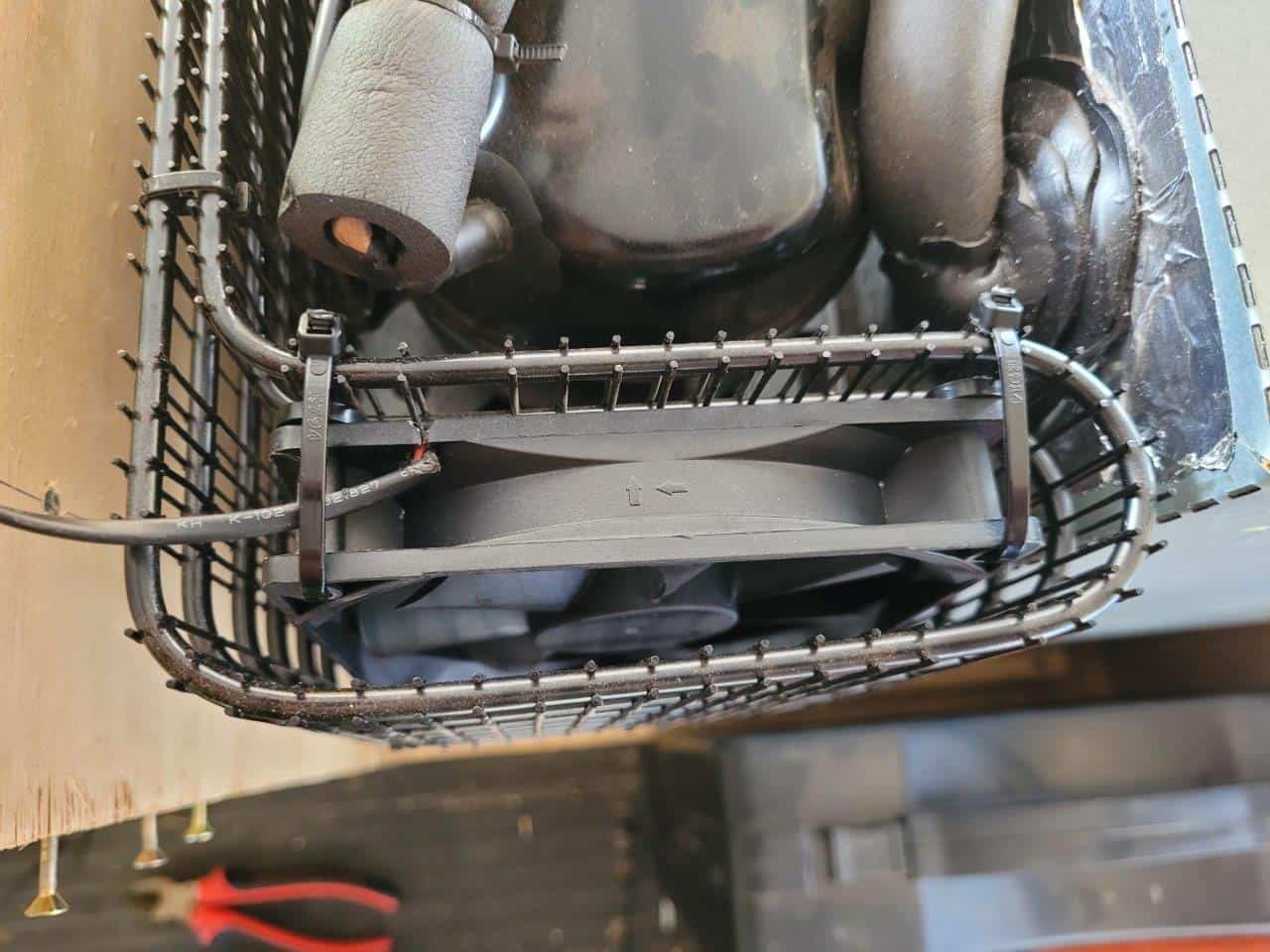