Bridgestone Dueler 697 review; are they any good?

We’ve been a few different types of tyres over the years, and have been running the Bridgestone Dueler 697’s for the last couple of years. They’ve done the Pilbara, Kimberley, Coral Coast, all over the south west of WA and plenty of pavement princess duties in between. 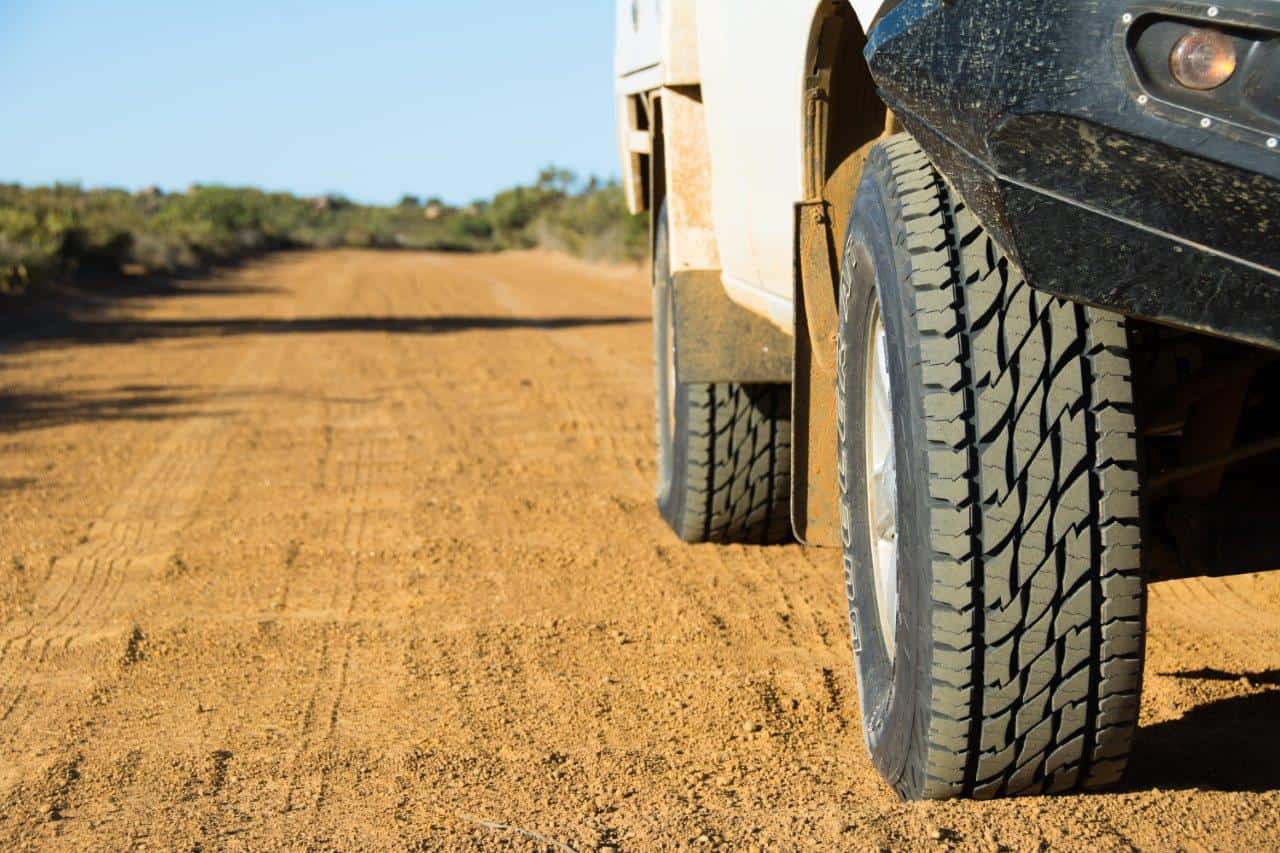 In this post, we cover how they’ve gone, what we think of them and whether they are actually any good.

We didn’t pay for these

However, before we go any further, I’m going to tell you something most people wouldn’t bother with, and its a pet hate of mine. I find it totally unethical, and you should too.

These 4 tyres were supplied by Bridgestone, free of charge. They were supplied for a photography assignment that I took on with Bridgestone many moons ago, with no agreements in place for doing a review, for raving about them, or anything else like that.

This review, like the rest of ours is done with 100% honesty, and we have no problems calling a tyre (or any other product) rubbish if it is.

Fortunately, we won’t be doing that today; the Bridgestone Dueler 697’s are great tyres, and we are still running them today. EDIT – We’ve just gone to Toyo Open Country RT’s, which we’ll review in due course too. 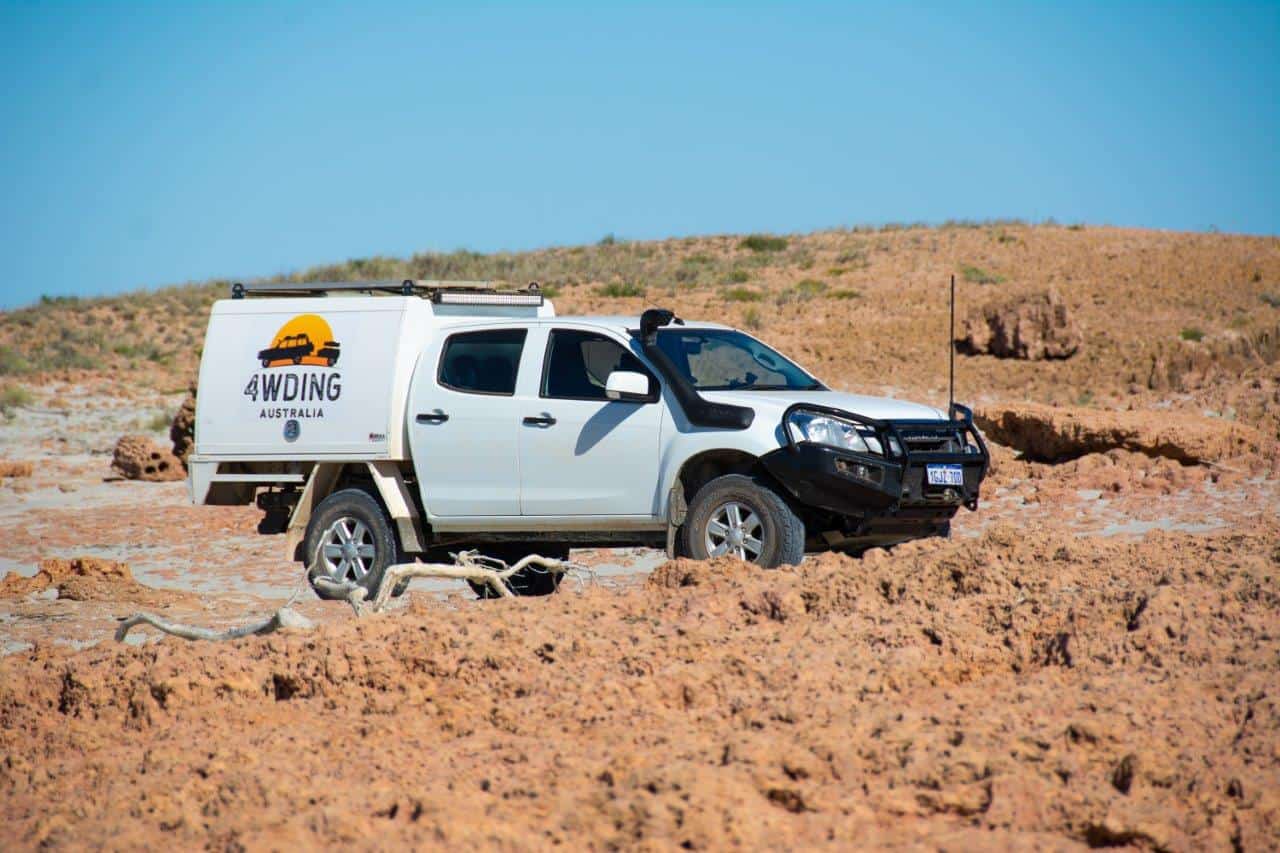 How have the Bridgestone Dueler 697’s gone?

How many kilometres have we done?

We could have pushed them further, but tyres are hard to get in Australia at the moment, and we are heading off on a lap of Australia shortly! The rear tyres in particular were pretty damaged from gravel roads, and we got a puncture near the Kennedy Ranges straight through the tread, which shows they were getting low!

Now, its important to know two more things; we only got 4 tyres, and they’ve only been rotated from front to back once, and had one wheel alignment at the same time with zero other tyre maintenance.

If you want your tyres to last as long as possible, regular wheel rotations are important (around every 10k), and alignments as needed.

A good mate of mine picked up that the inner parts of my tyres were wearing badly on a trip up north, and we had a wheel alignment done mid trip, but they haven’t been overly well cared for in that regard. 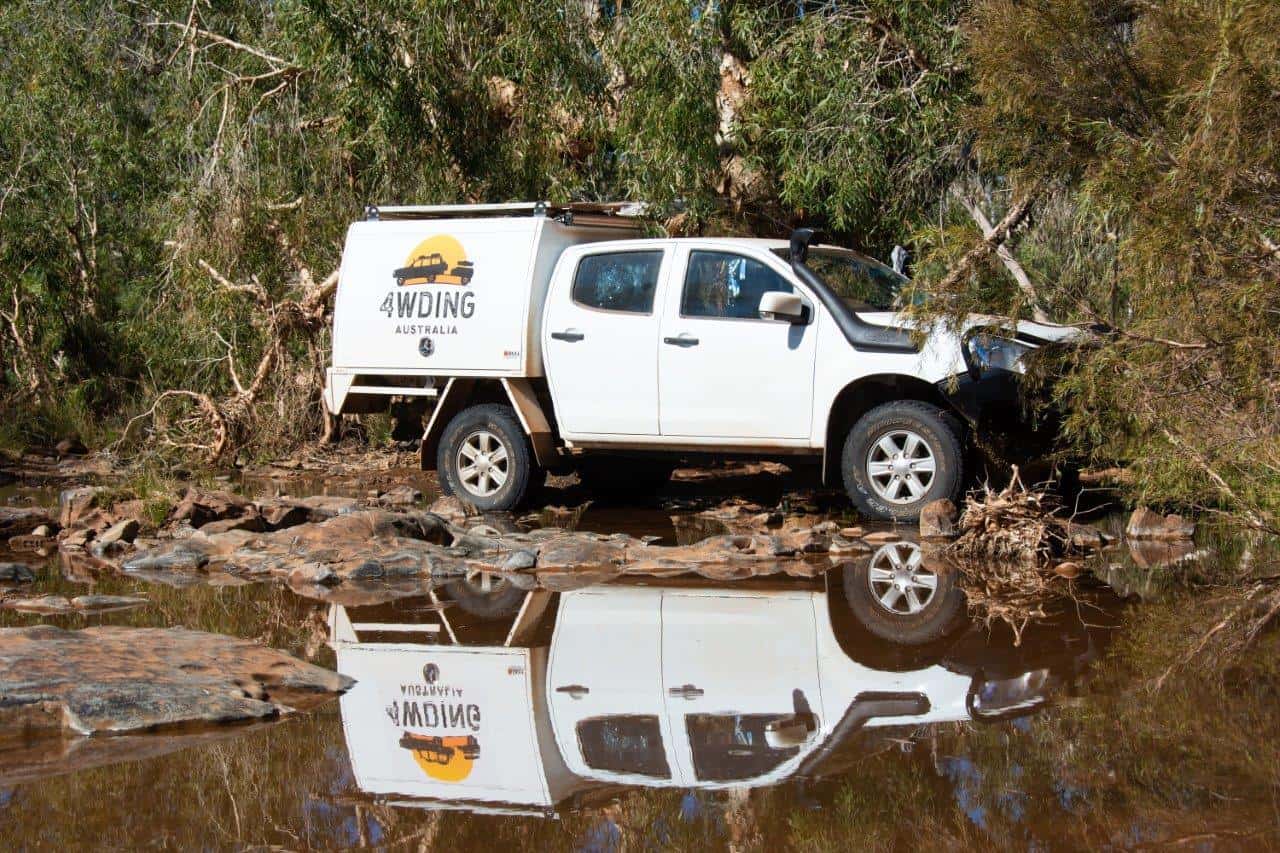 What conditions have they been put through?

The Bridgestone 697’s have spent a fair chunk of their life on bitumen roads. However, that’s because this is our family vehicle too and we’ve still done several thousand kilometres of off road tracks, corrugated gravel roads and nasty rocky Pilbara tracks.

We’ve had them all along the south coast of WA, through the Ningaloo region (including the Exmouth 4WD tracks), Pilbara, Cape Leveque and in between.

They’ve been subject to towing our Reconn R2 for most of our travels, and run at a whole heap of different tyre pressures for the varied speeds and terrains. 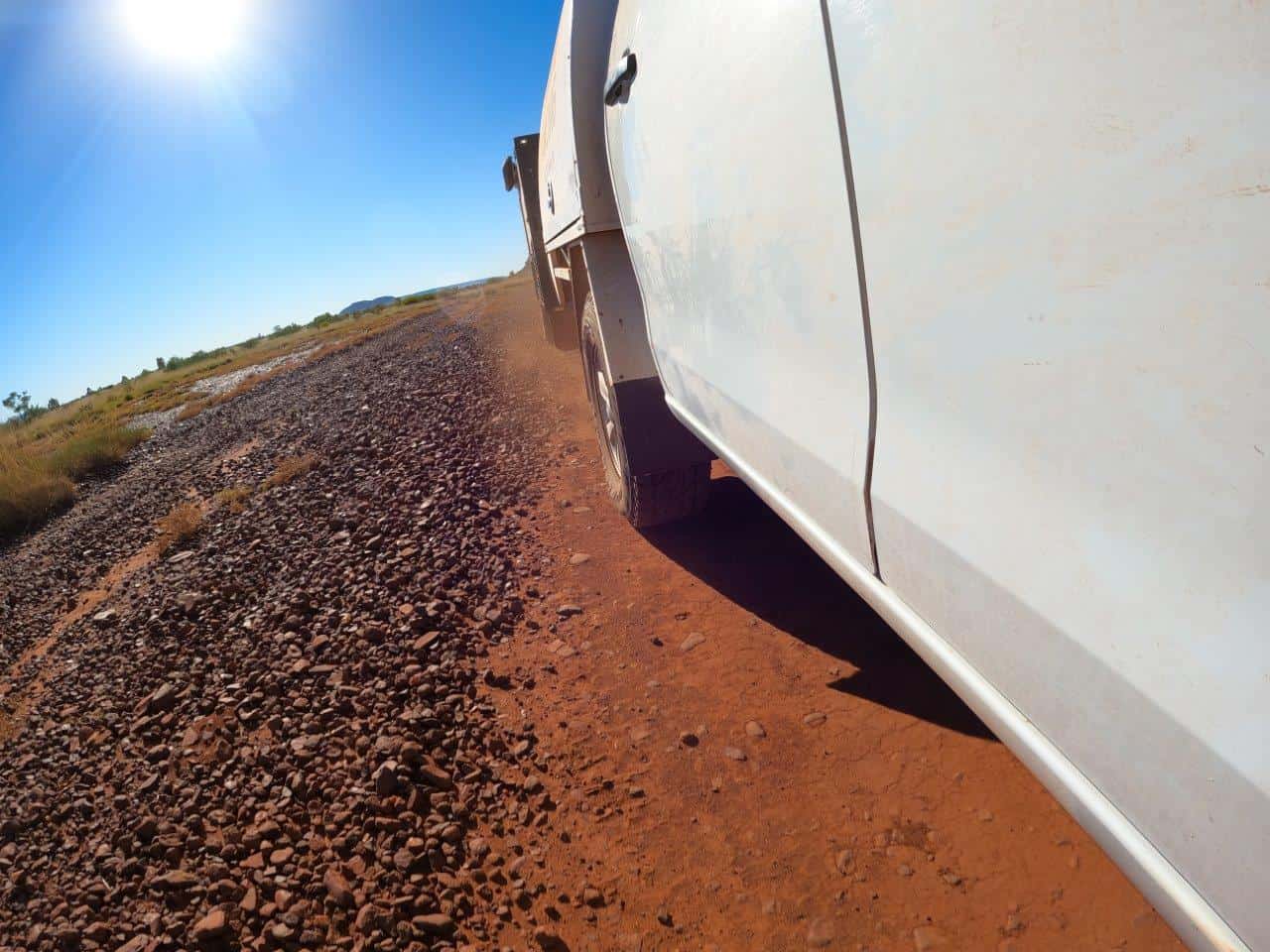 I mentioned above that we didn’t pay for these tyres. However, in a 265/75/16 they are currently about $330 per tyre, depending on where you get them.

Bridgestone Duelers in the wet

Like most all terrains, you have less traction in the wet on bitumen than you would with a traditional road terrain tyre. These perform in a similar manner to the Toyo AT2 tyres on wet bitumen, and aren’t poor or uncontrollable, but they will lose traction if you are a bit zealous with your acceleration.

They seem to be a significant improvement on the factory Bridgestone Dueler 693’s, which lose traction very easily going around a wet corner in a dual cab Ute, with minimal acceleration. 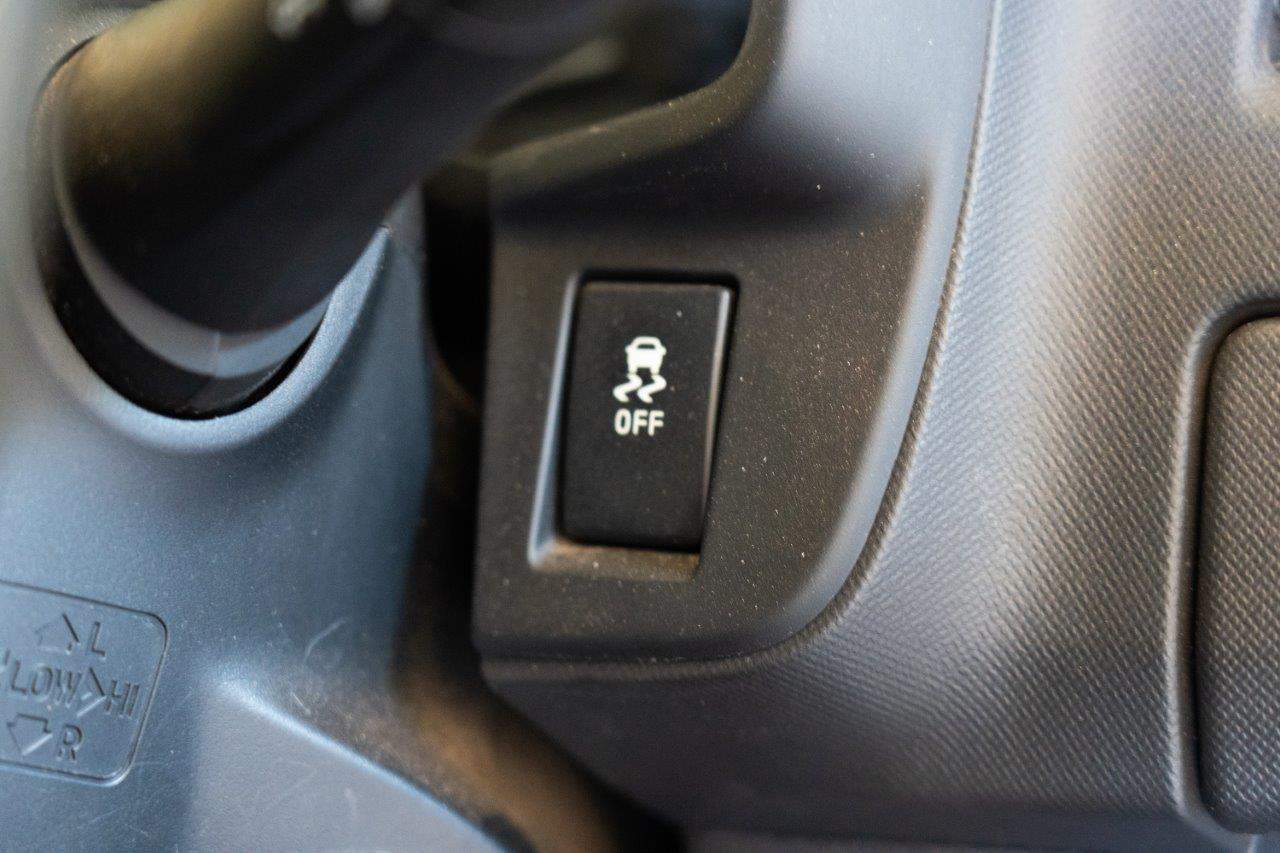 Traction isn’t too bad with these in the wet

Bridgestone runs a number of different tyres. The 697 is their light truck all terrain tyre, which is what we have been running. However, the original tyres that came with the Dmax were Bridgestone 693’s, and these are a common original specification by the manufacturer when new (Isuzu, Toyota, Mitsubishi etc).

The 693’s are more of a road terrain tyre, are cheap, quiet and have average traction.

They are not nearly as heavy duty as the 697’s and for anything other than beach driving and bitumen duties, I would not run them. They are not light truck specified, have much less traction and are generally one of the cheaper tyres you can put on a 4WD. They do make good trailer tyres though!

It’s important to know that our Dmax came with Bridgestone 693’s originally, and the Mitsubishi Triton that I currently drive for work has them too, so I can fairly comment on their performance too. 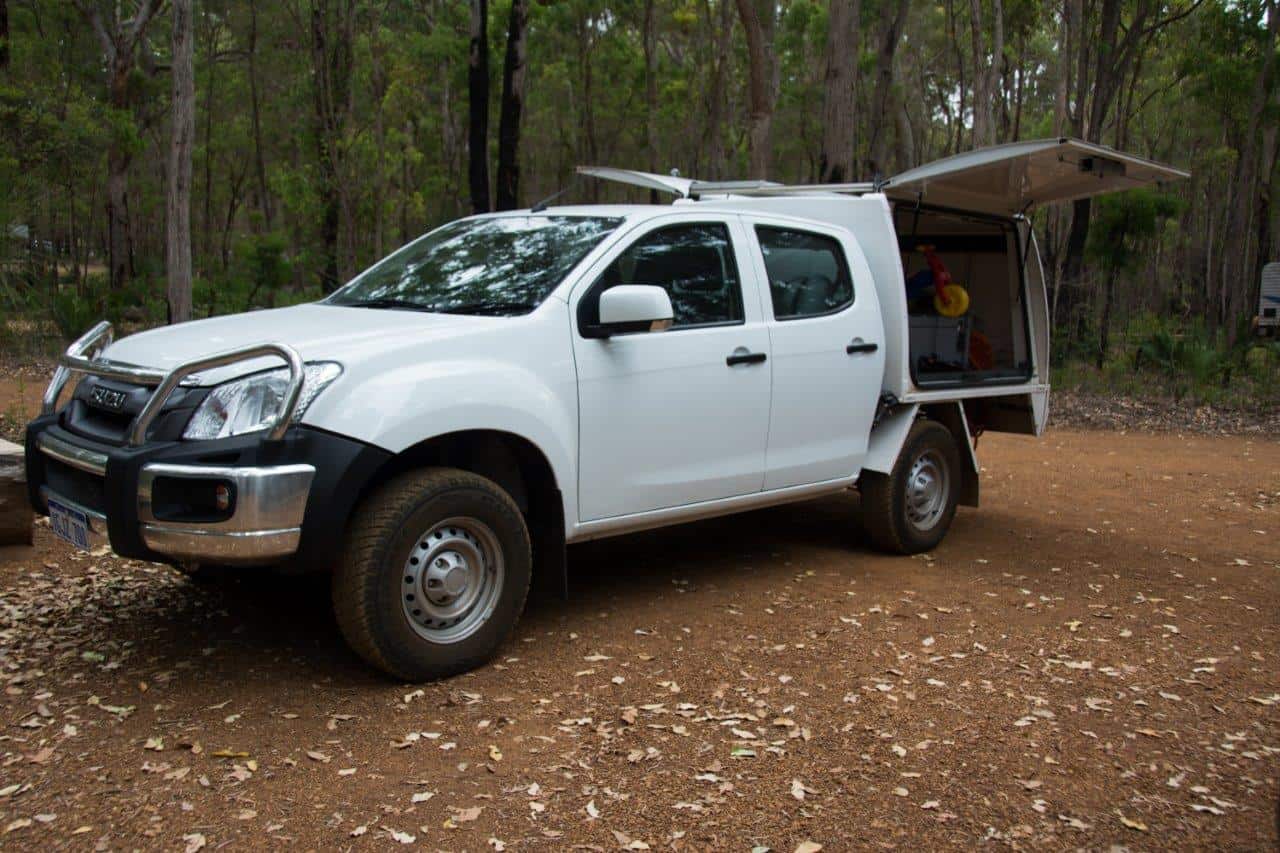 How have the Bridgestone Dueler 697’s worn?

The 697’s have done fairly well in the wear department. I mentioned above that we had some inner tyre wear which was from the wheel alignment not being quite right (probably from driving with so much extra weight on the rear), but they’ve worn fairly evenly.

Our original wheel alignment was done with almost no weight in the rear, and with no tow ball weight, which means when you do load it up and travel the alignment isn’t going to be good. 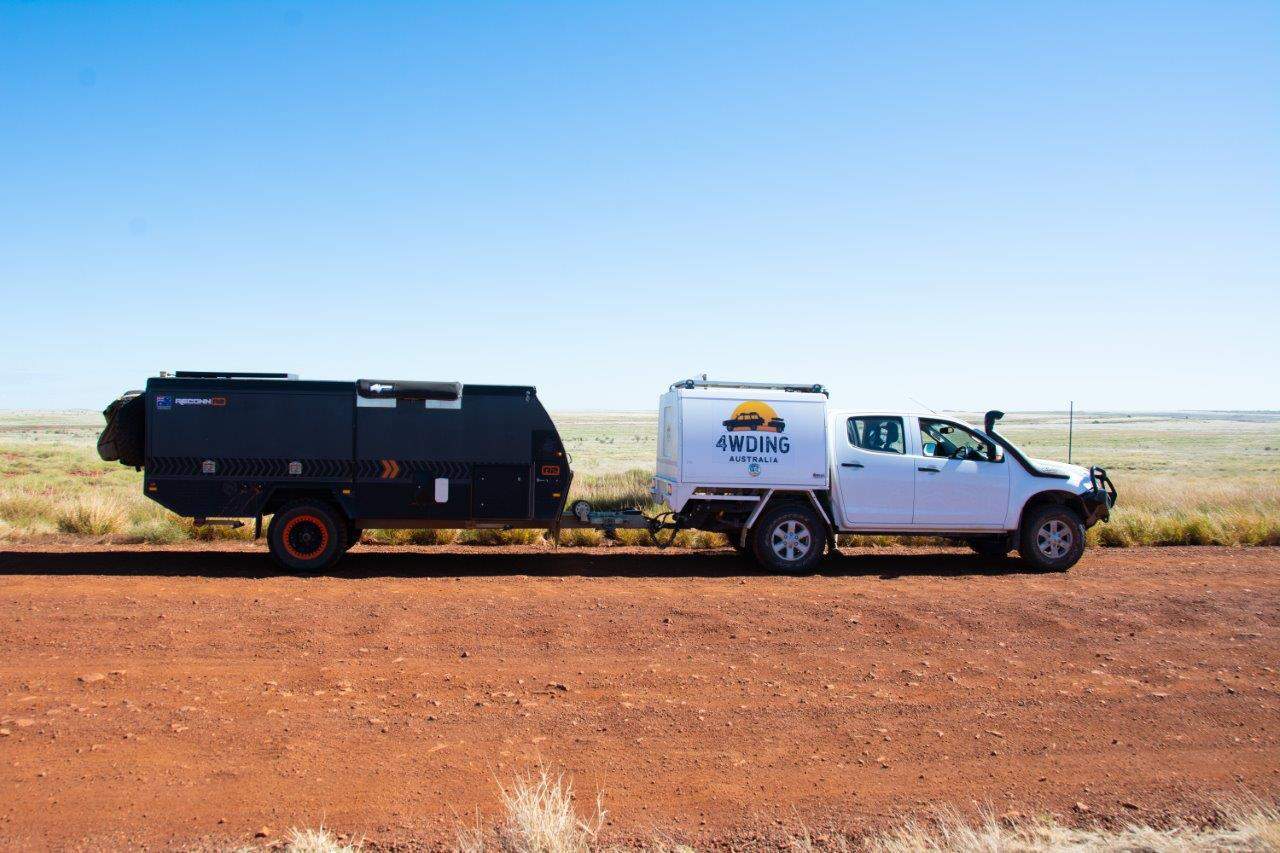 I will say they weren’t the quietest thing when we got them (although quieter than our worn Toyo AT2 tyres), and they’ve gotten noisier since.

Not nearly the noise that you’d hear from muddies, but they are obviously noisier than when we got them. Part of that is probably from a lack of regular wheel rotation, so I’ll accept that fault.

I will say they’ve worn better than our Toyo AT 2 tyres, but I’m not overly surprised at that. 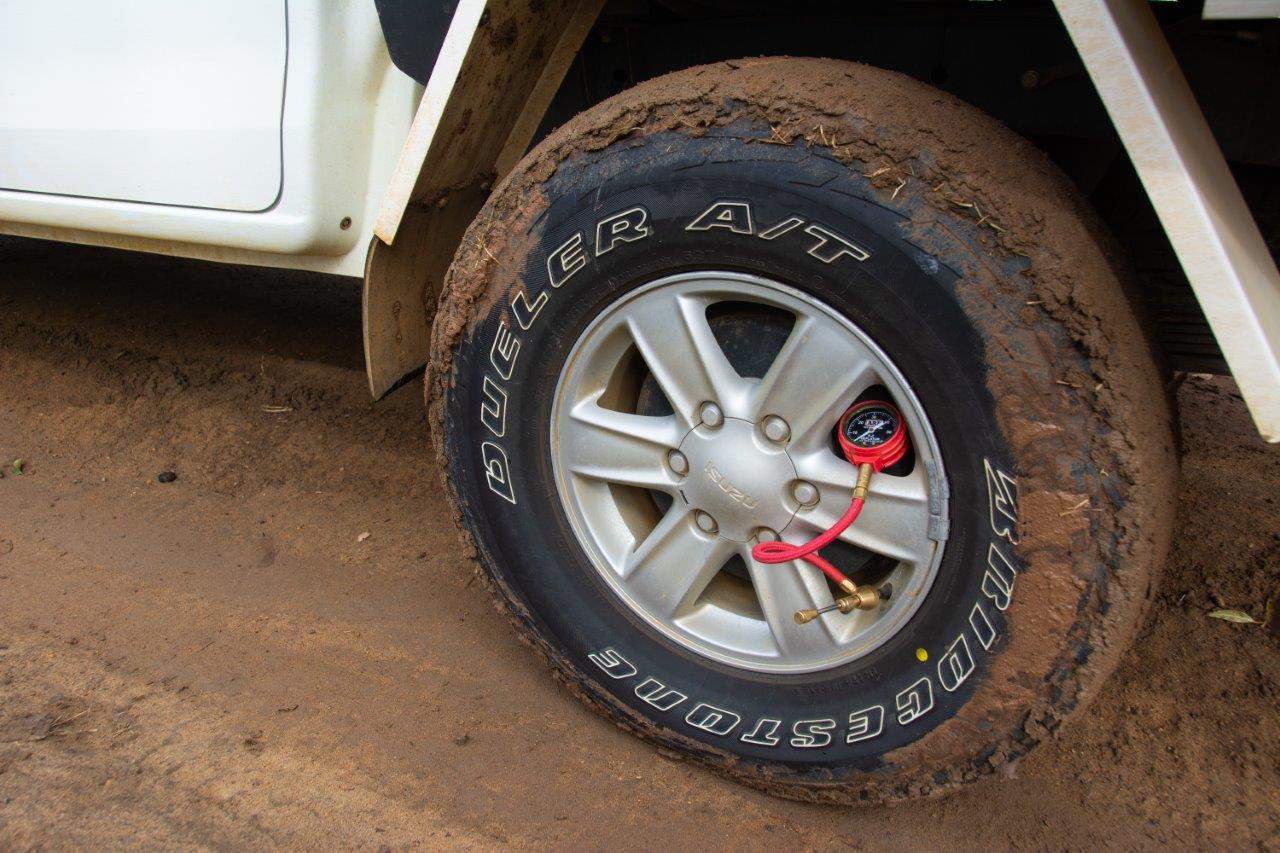 The only issue we’ve had with one Dueler was a small air leak, which would drop the pressures from 50 PSI down to 25 over about a month. EDIT – we also had a puncture in the Kennedy Ranges when the tyres were getting to end of life, which I fixed with a tyre repair kit.

I tried unsuccessfully to find where it was coming from, and then when we were camped at Dampier I managed to get a puncture exploring the Dampier Peninsula, and woke up early one morning to a flat tyre. It was fixed in Karratha, and we’ve had zero other issues.

They’ve been punished too, at all sorts of pressures and speeds, through mud, rocks, sand and everything else you can throw at them, and they are still going great. 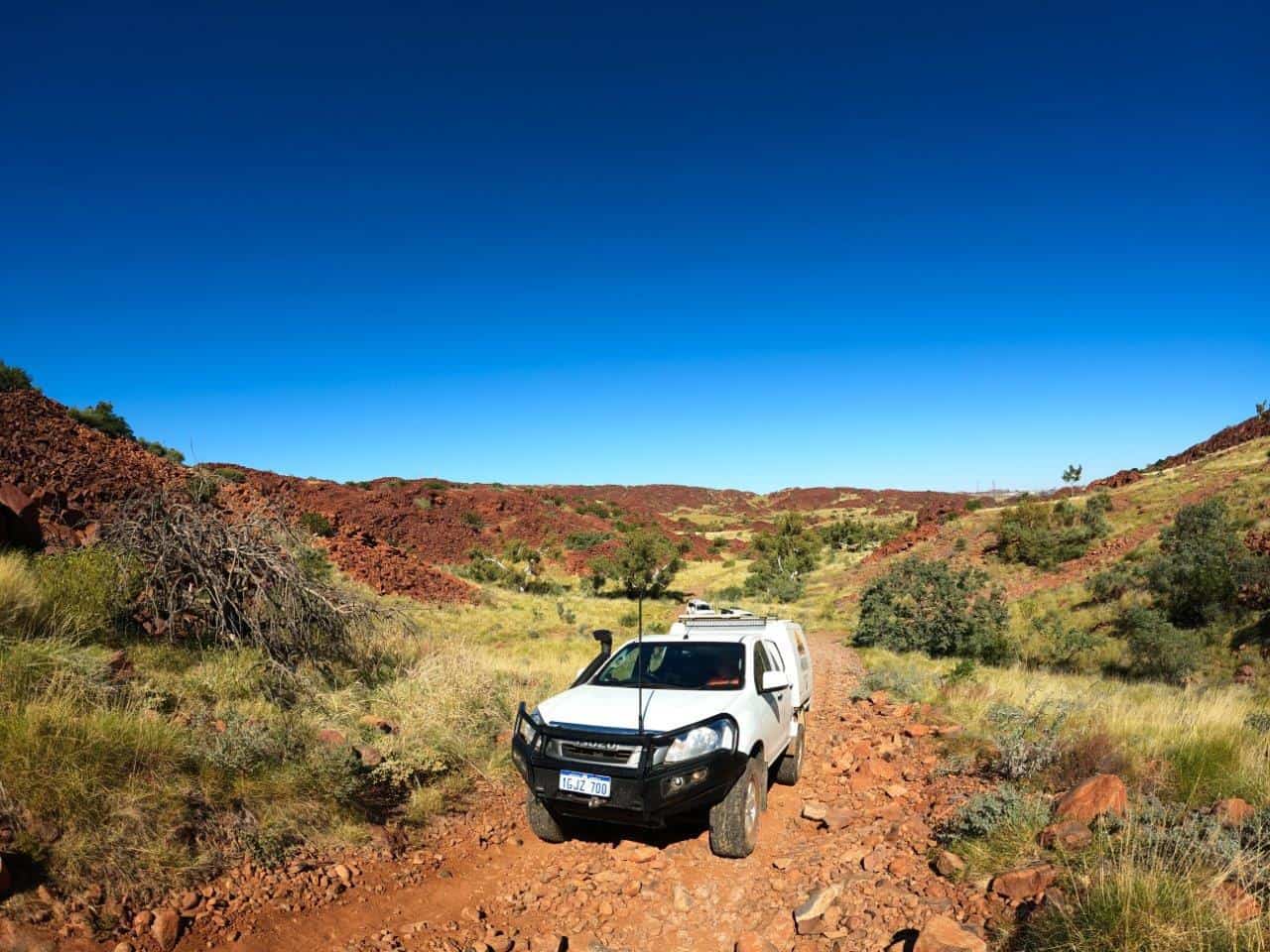 I managed to get a puncture in Dampier

Bridgestone 697 vs Toyo AT2

Prior to the Bridgestone 697’s, I had Toyo AT2 tyres on the Dmax, and they copped a hammering as well.

I’ve still got 4 of them in the garage (and one spare under the car), and went straight from the Toyo AT2 to the Bridgestones, so I can give a fair comparison. 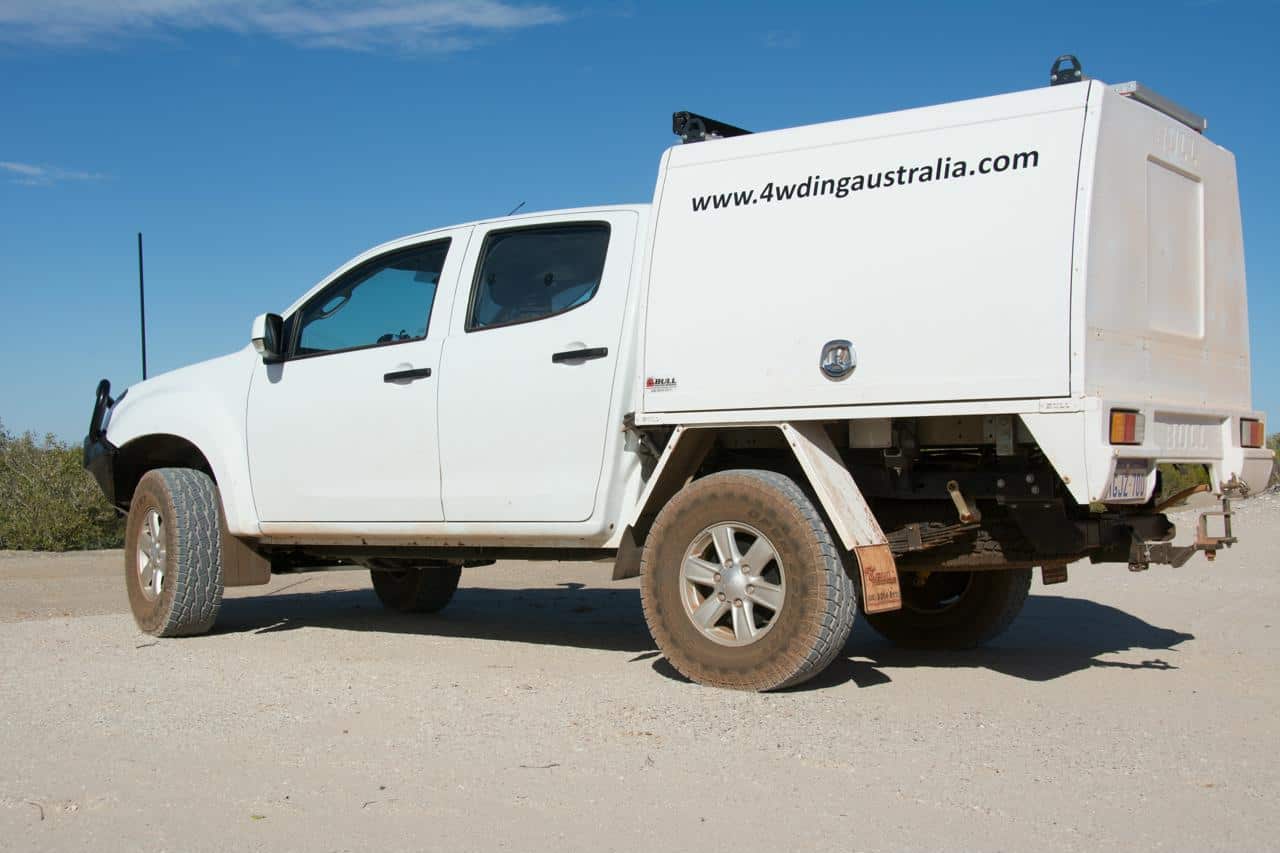 We gave our Toyo tyres a hard time too, and they performed great as well

Honestly, I don’t feel there’s much in it. They are both solid tyres, and I didn’t really notice any better performance with either tyre.

I suspect the Toyo’s might have an edge on traction when it gets slippery, but the Bridgestones have worn better, which is probably related to the rubber hardness.

I’d happily run either, and I’d happily pay for either too. We might try the Toyo RT’s next, or something else that gets a good reputation.

Do you run Bridgestone 697’s? Are you happy with them?