Do you carry spare wheel studs?

Getting a set of wheel studs for our Isuzu Dmax and Reconn R2 has been on my to do list for a while now, and I’ve never gotten around to doing it despite doing plenty of 4WD tracks all over western Australia, and being away from major towns regularly.

However, when we pulled into Broome Caravan Park and heard that our parents off road van had lost a stud, it jumped in priority.

Later on in the same trip as well, we came across a young bloke who’s rear left wheel had come off his 4WD coming into Marble Bar, from wheel nuts coming loose and snapping some of his studs off. 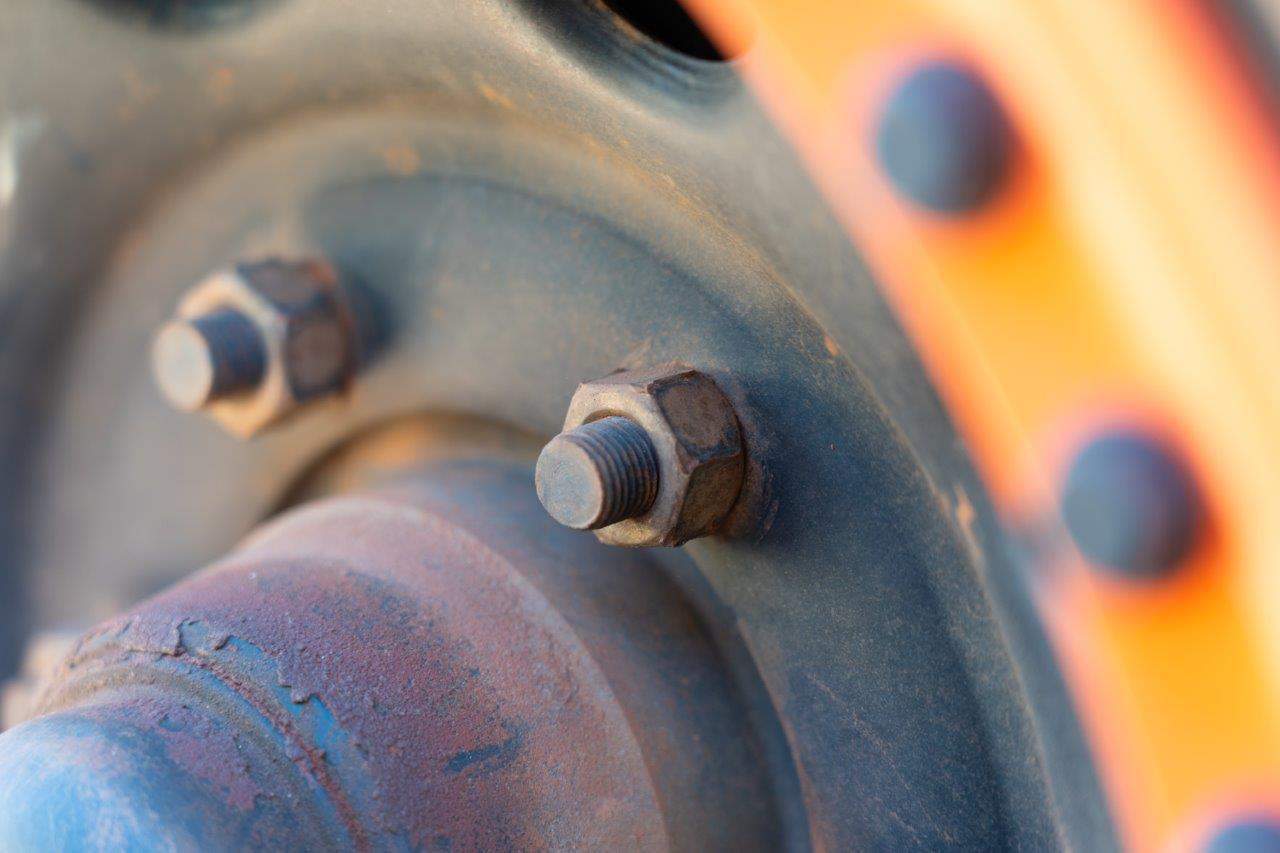 What condition are your wheel studs?

What is a wheel stud?

For those who don’t know, your wheel studs hold your wheels in place through the hub of your trailer, along with your wheel nuts. If they are over tightened, poor quality or they come loose they can break, and if you lose a couple, often the wheel will break off and you can end up with a catastrophic accident.

The camper trailer just opposite them had exactly this occur, and the damage up the side of the camper trailer was significant, plus no doubt damage to the hubs, drums and everything else in the surrounding area.

In the case of the 4WD above that had a wheel come off, it could have been much worse. Two people spent more than an hour trying to find the 4WD wheel that had speared off into the distance, and couldn’t.

That alone could have killed someone, but having a wheel come off at high speeds can easily result in a roll over. 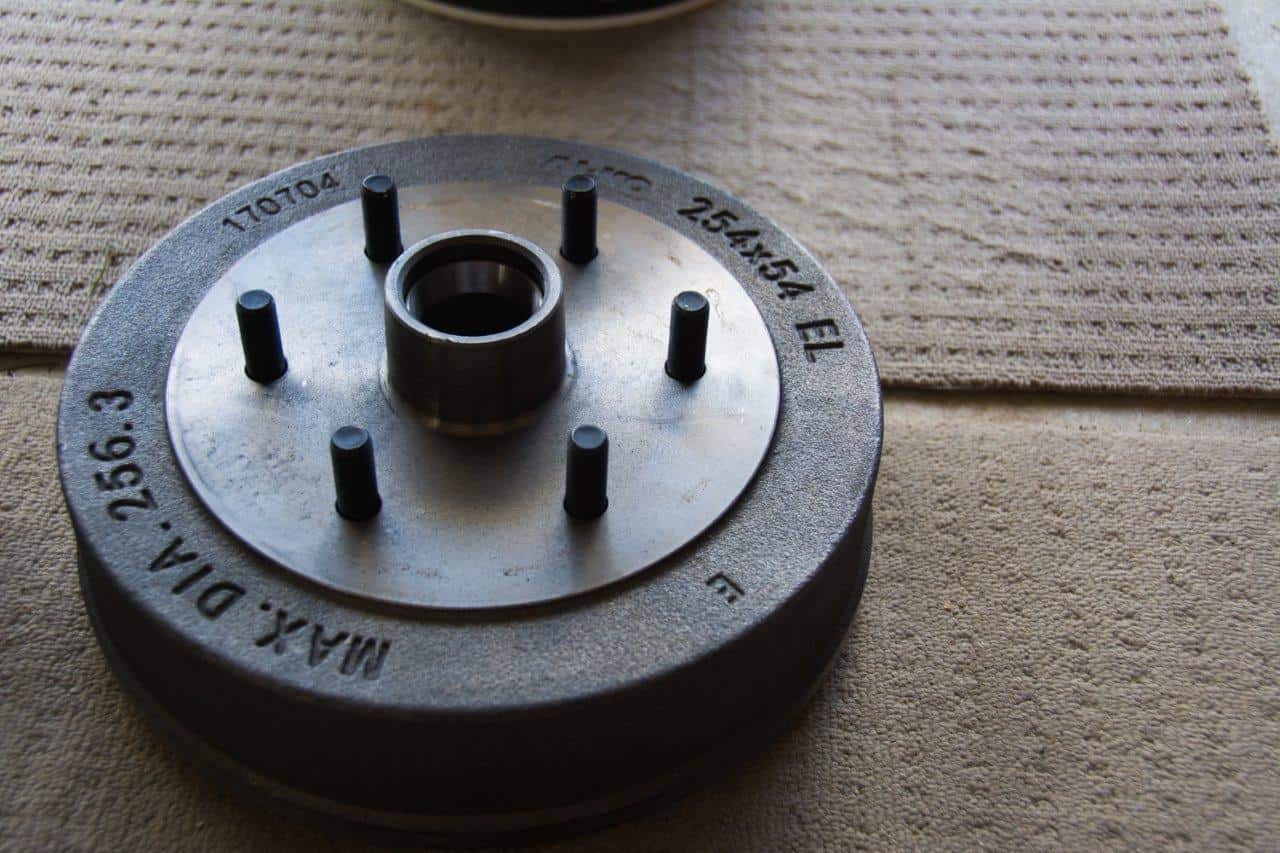 Caring for your wheel studs

Like every piece of your 4WD and trailer, wheel studs have their limitations, and will fail if not cared for correctly. There’s a number of things that you should be doing to care for your wheel studs.

Find out the right tension

Regularly check the tension with a torque wrench

You’d be amazed at how often wheel nuts come loose. This applies to 4WD’s, caravans and camper trailers, especially on corrugated roads. You might be surprised at how tight they need to be as well, and how far off your estimation is compared to a calibrated torque wrench.

I’ve tightened my wheel nuts a number of times, guessing how tight they should be and then gone back with a torque wrench and found some right, and many well under torqued.

The more important thing with a torque wrench is that it gives you even, and consistent force. When you do it up by hand, you’ll get some that are tighter than others, and that is not a good place to start.

Avoid workshops that rattle them up

If you see a tyre shop, or mechanic that rattles your wheel nuts on without using a torque wrench, or at the very least a clutch arrangement in the socket you should not return. Rattle guns are very strong, and will very easily apply far more force to the wheel studs than they should.

The number of people who’ve had their vehicles serviced, and gone under 50km down the road before the studs have sheered off is just incredible, and its all because people over tighten them with rattle guns and then they fail when you need them most.

At the very least, they will stretch the wheel studs and that will eventually make them break, or the nuts to come loose more easily.

Keep a keen eye on them

When you do your morning walk around the vehicle, make a point of ensuring all of your wheel nuts, and studs are in place. If it wasn’t for someone with a keen eye walking past my folks van, they’d never have known one was missing, and eventually another would have gone, and then probably the rest in a hurry. 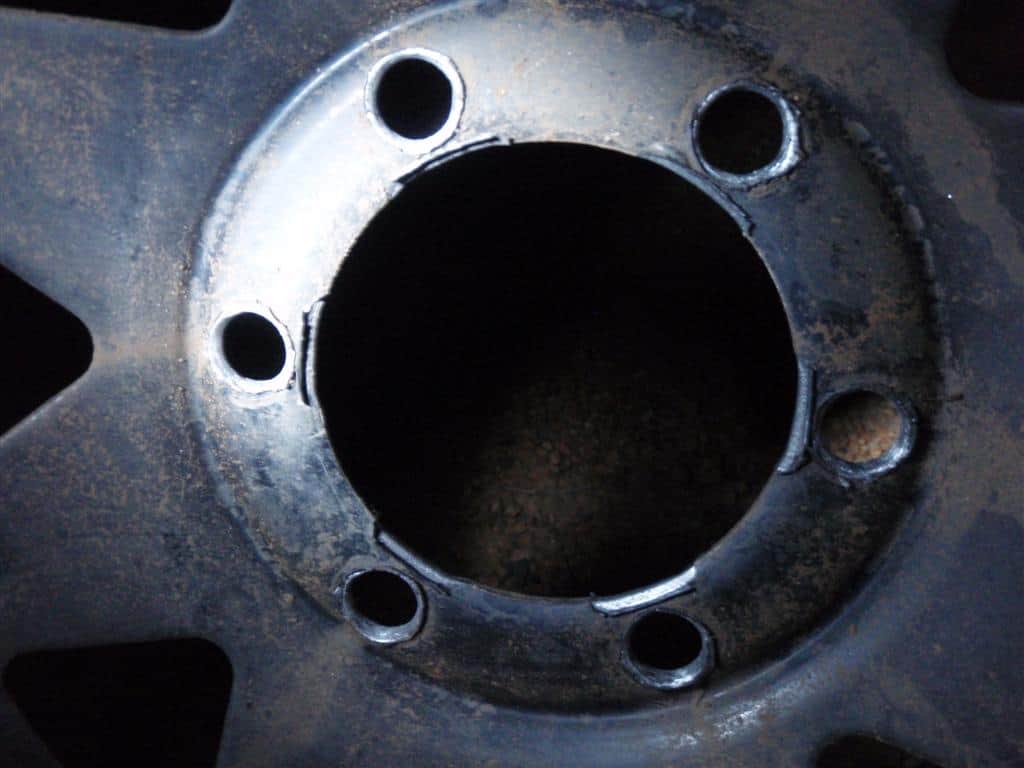 Damage to a wheel from wheel nuts coming loose

Where can you get new wheel studs?

My dad had quite a hard time getting new studs for his van in Broome, and had to settle with a couple of different varieties that were shorter, and longer than what he wanted.

It was enough to keep them travelling safely with a thorough fix to be done in Perth, but it’s a good reminder that they aren’t always easily accessible.

You’ll be able to get them from some auto shops, and most definitely from the hub manufacturer. They are not all the same, and are not interchangeable, so get the right ones! 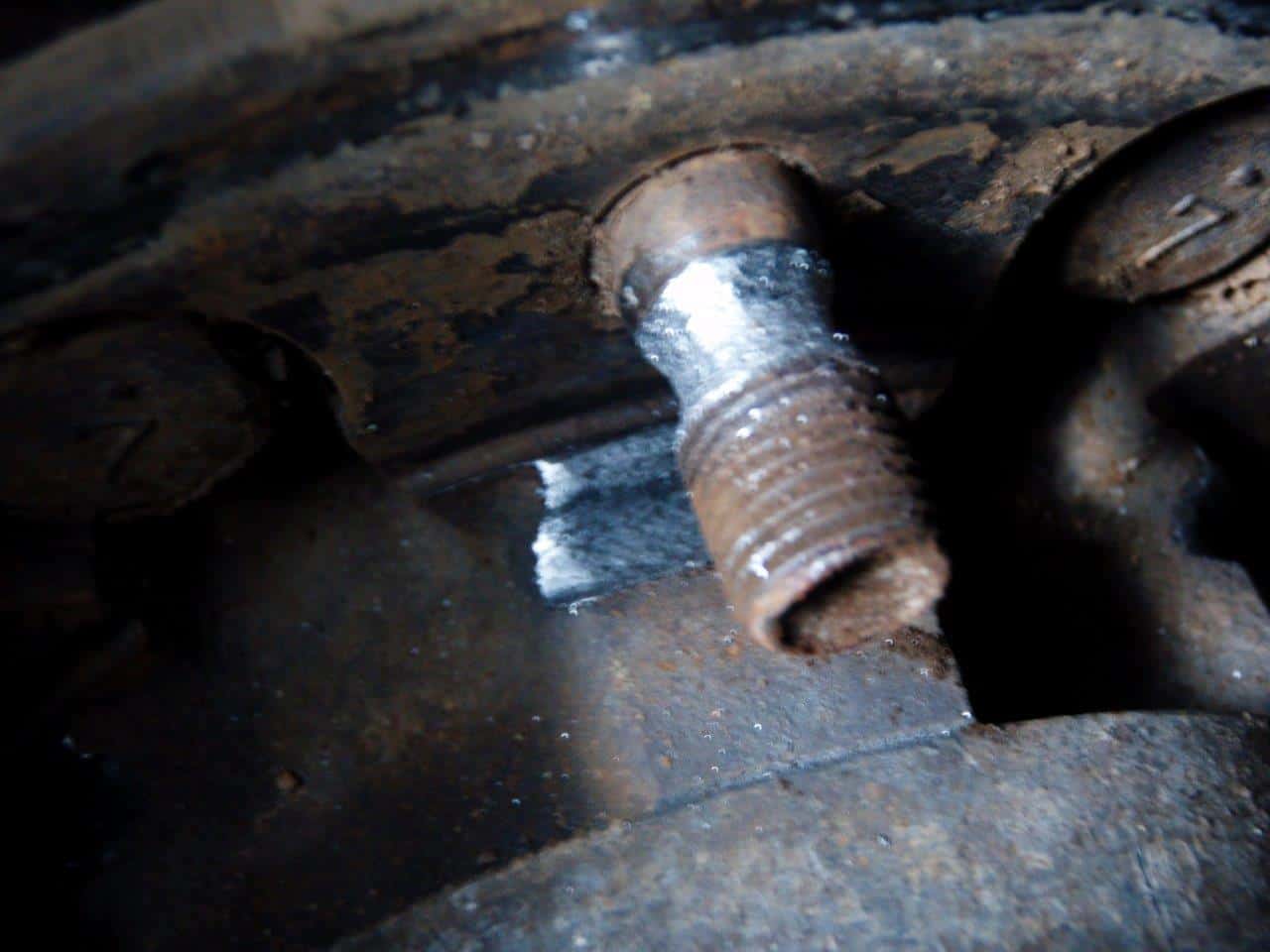 How to replace wheel studs

Most wheel studs require you to take the wheel off, then the drum brake shoe, and you knock them out through that. They have grooved sections that need to line up to stop them turning when you do the nuts up, but can be easily knocked out. Protect the thread by using a nut on the end of it (never hit the end of a thread) and you can replace them quite easily and quickly.

Of course, to take the shoe off you’ll more than likely need to undo the bearing nut and re-tension it, so don’t attempt this if you aren’t well and truly familiar with trailer wheel bearings, and how to set the correct tension. 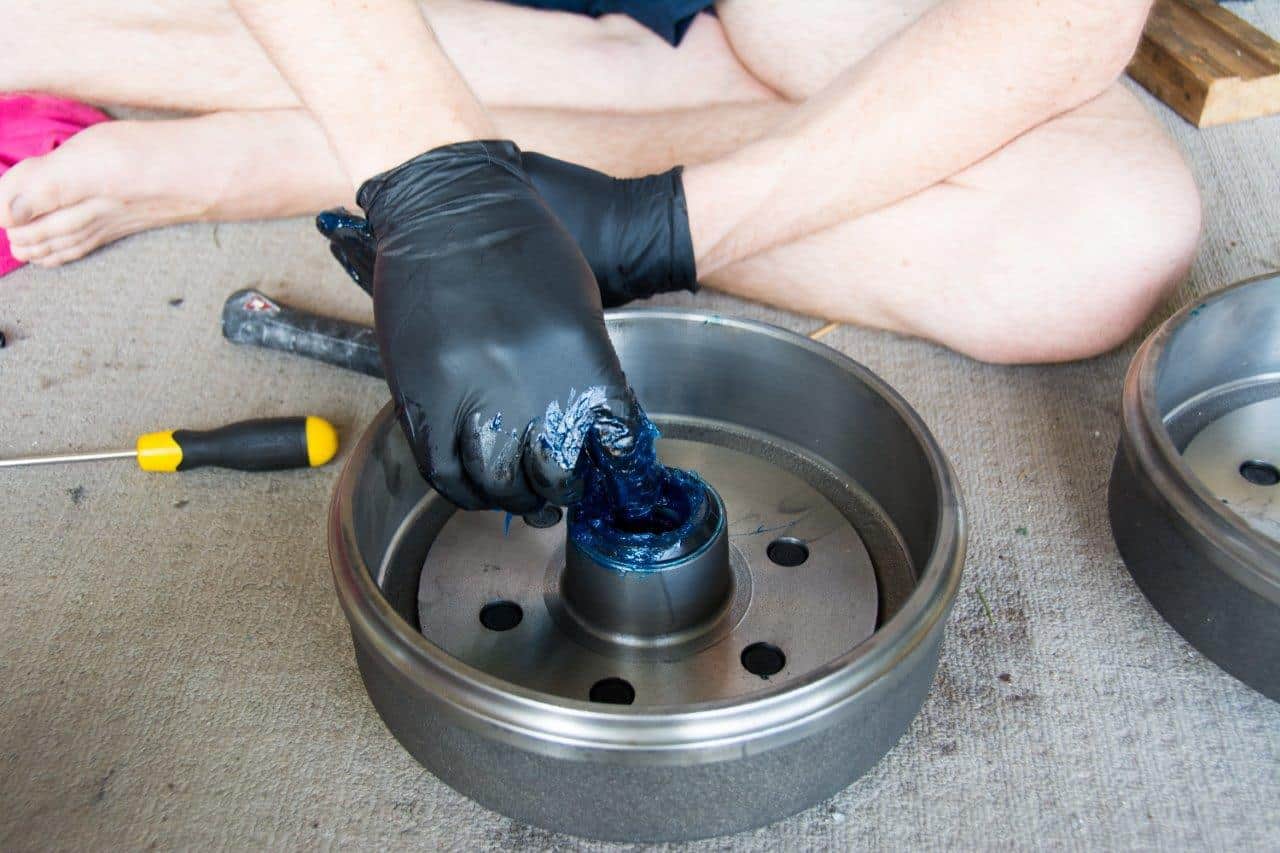