Tow balls in 4WD recoveries can kill you

Another week, and more video’s on social media of people recovering 4WD’s using their tow balls. It sickens me to think that at any moment, another person could be killed because of a lack of knowledge, care and respect for 4WD recoveries.

Many 4WDer’s are well aware of the huge risk taken when a tow ball is recovered off, and avoid it like the plague. However, there are still those who don’t know better, or who simply don’t consider the drastic consequences of such a decision. Recovering a 4WD from a tow ball is just one of 20 things you should never do in a 4WD recovery. 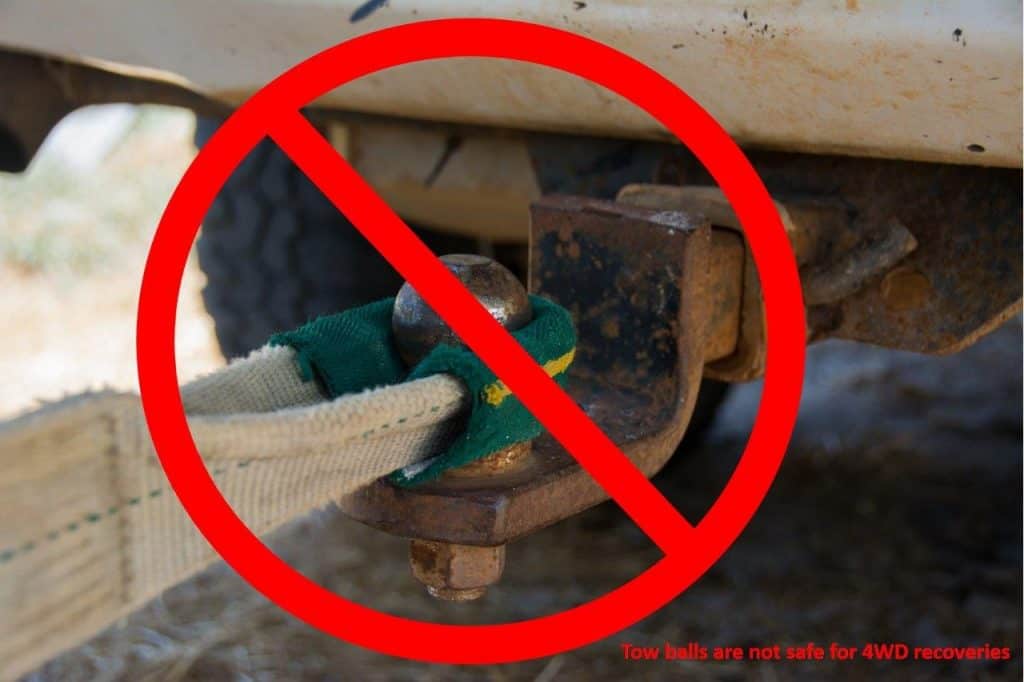 Tow balls are not safe for 4WD recoveries

In 2011, a young mother of three was killed in Geraldton when the tow ball of a 4WD being recovered broke off, went through the windscreen and hit her in the throat. A terrible, terrible tragedy.

Sadly, this is just one of several instances in the last few decades where people have been killed while a 4WD recovery is going on. Sometimes its the driver, but it is often a passenger or bystander that gets collected. Each and every time it could have been avoided.

There are some very graphic video’s of people being killed when 4WD recoveries go wrong and something breaks. Don’t become another statistic.

If you want the list, and news articles of those who’ve been killed in Australia when 4WD recoveries have gone wrong, have a look at 4WD recovery deaths in Australia. This is what can happen with a tow ball recovery gone wrong.

Unless you’ve been told why recovering off a tow ball is a bad idea, its not common knowledge. It seems pretty logical; they are right there, easy to hook the strap on and they look pretty strong. Please don’t use them, and if you see it being done, say something.

Why do tow balls break?

Tow balls are intended to gently tow 2.5 – 3.5 tonnes of coupled trailer. When towing a heavy trailer, its a solid connection between the vehicle and the trailer, with no stretch, yanking or jerking action in place. 4WD recoveries can easily apply over 2.5 tonnes of force, and when you use a snatch strap it relies on the build up of kinetic energy, which shocks the tow ball.

The issue with tow balls is they very in quality dramatically, can wear and rust. The torque applied to the nut underneath, along with the correct spring washer also play a role in how strong they are. Tow balls fail from time to time towing a trailer, let alone being recovered from.

Think about it; when was the last time you removed your tow ball to check for wear or damage? I removed one just the other day, and the thread was damaged and it had a fair bit of rust.

Have a think about your snatch strap in the back of your 4WD; most of them are 8000 pound or above. That’s about 3500kg, and more than enough to snap a tow ball. For those of you with heavier 4WD’s, you are probably using 11,000 pound snatch straps, which is nearly 5 tonnes of force. How many times do you see snatch straps break? More often than you should! 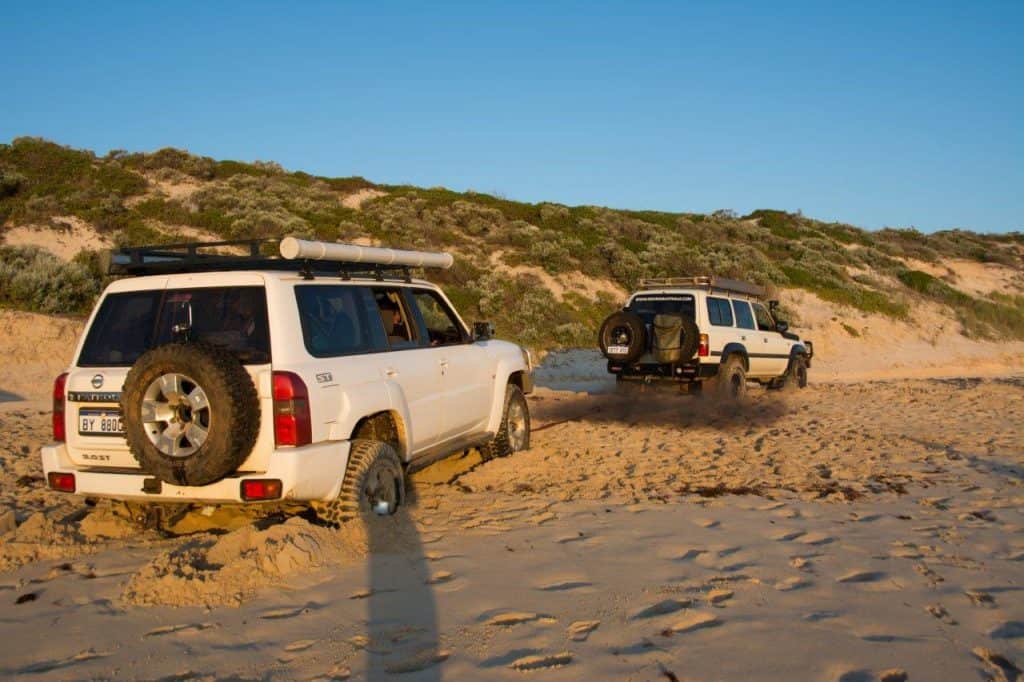 4WD Recoveries can be very dangerous 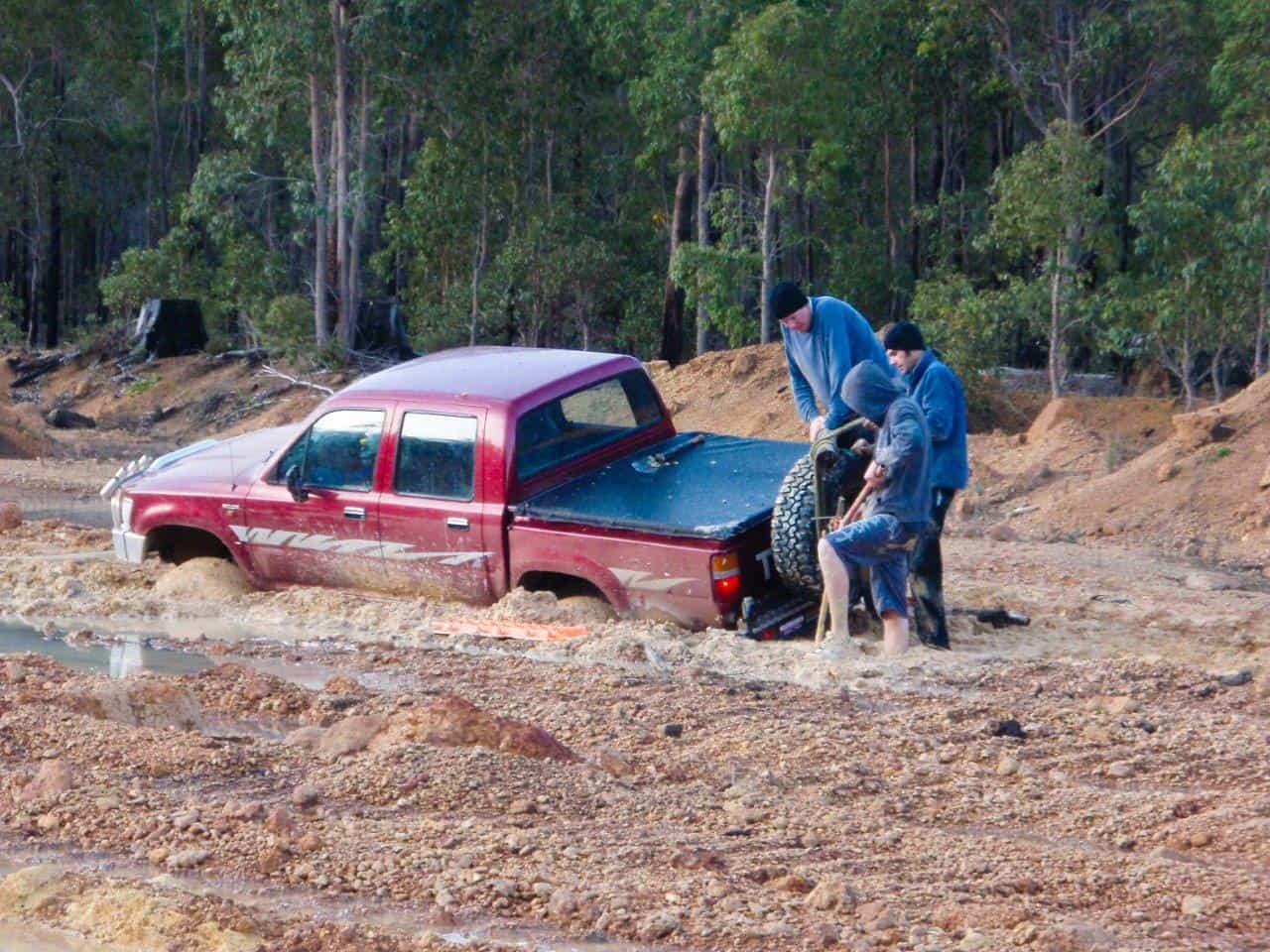 How much force do you reckon to pull this out

What happens when a tow ball breaks?

4WD recoveries apply a lot of force (to find out exactly how much in different scenario’s, check this out – 4WD Recovery Forces). When something in a 4WD recovery breaks, it is like a gun going off. Something is going to fly through the air faster than you can see it. Even a simple snatch strap without a dampener easily has enough force to smash the rear window of a car, and they don’t weigh very much.

Add a tow ball into the mix, which probably weighs around 700grams, and you have a missile that will travel at well over 100km/h. There are plenty of photos on Google of tow balls that have literally gone through a 4WD panel, or wedged themselves into the spare tyre on the rear of a 4WD. If the tow ball hits someone involved in the recovery, you can guarantee at best they are going to be seriously injured.

Anyone inside the vehicles involved in the recovery are at risk as well as any bystanders outside.

I’ve always done it that way

You’ll always meet those who say ‘I’ve always done it that way’, refusing to believe that they could possibly be wrong. Just because it hasn’t broken yet doesn’t mean it won’t; show them a video of a tow ball breaking and then ask if they think the risk is worth it!

Instead of recording it, say something

Everyone loves to take photos and videos of 4WD recoveries these days, but if you see something happening that is unsafe, have a quick word to those involved if you can; you could literally save a life.

Where should you recover from?

So, tow balls are a big no no. Where do you recover from then? The safest method is to use two rated recovery points on the vehicle with a bridal strap in between.

Second to that is using a rear hitch receiver recovery point and rated shackle in the reece hitch. Lastly, if you can’t do either of the above, remove the hitch completely, and put the snatch strap inside the reece hitch with the pin feeding through it. Ensure the tow bar is adequately bolted on though! 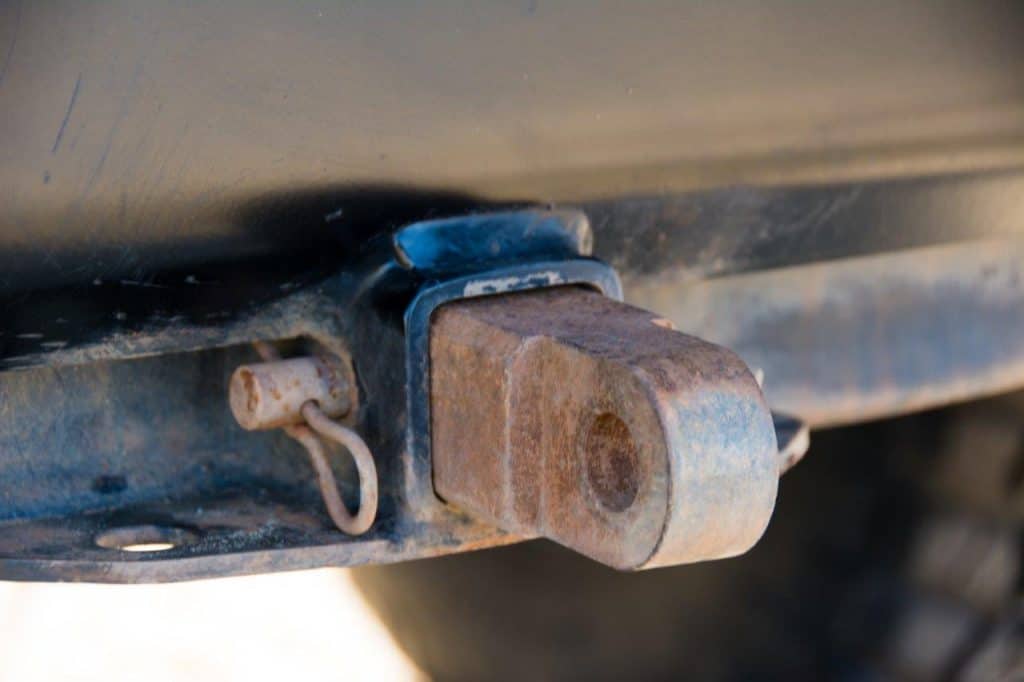 Use a rated recovery hitch with a 4.75 tonne shackle 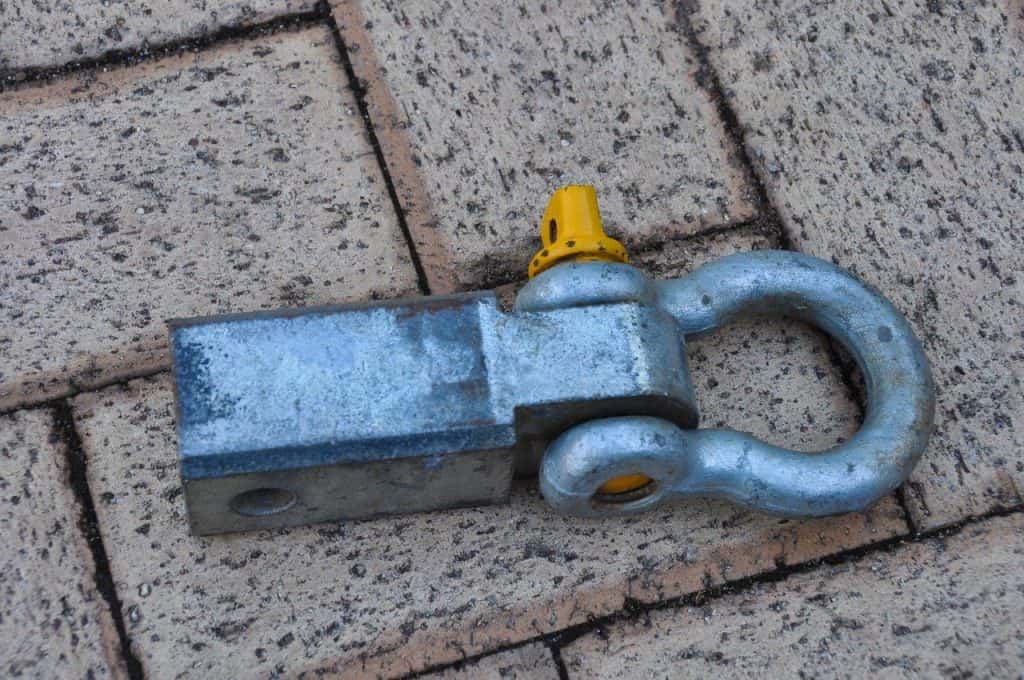 Factory points are no better

There are only a couple of 4WD’s that come with rated recovery points. All the rest are just tie down points and can break very easily in a 4WD recovery.

In every 4WD recovery, you should be reducing the amount of force needed to extract a vehicle by using traction aids and a shovel if possible. It takes a minute or two with a shovel, and you can reduce the forces from enough to snap a snatch strap to a simple, easy and safe 4WD recovery. Always consider what the Weakest link is in your 4WD recovery. 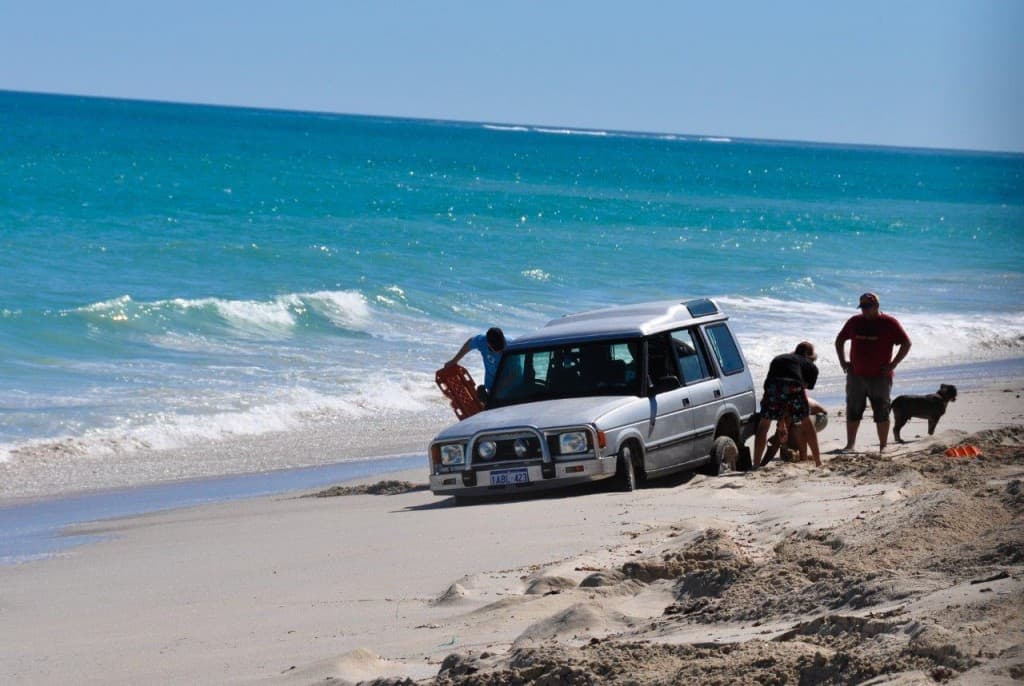 A bit of digging, traction aids and the right tyre pressures make 4WD Recoveries much safer.

If you know anyone who’s still using a tow ball to recover 4WD’s, please share this with them. Even if you don’t, share it anyway! Let’s put an end to 4WD recoveries using Tow balls, and prevent any further injury or death.