The John Holland Track is a very well known 4WD track that runs from Broomehill to Coolgardie. It was created by John Holland back in 1893, as a shortcut to the Goldfields. It was used extensively by those hoping to make a fortune with gold in the early days, up until the rail line from Southern Cross to Coolgardie was created in 1896. 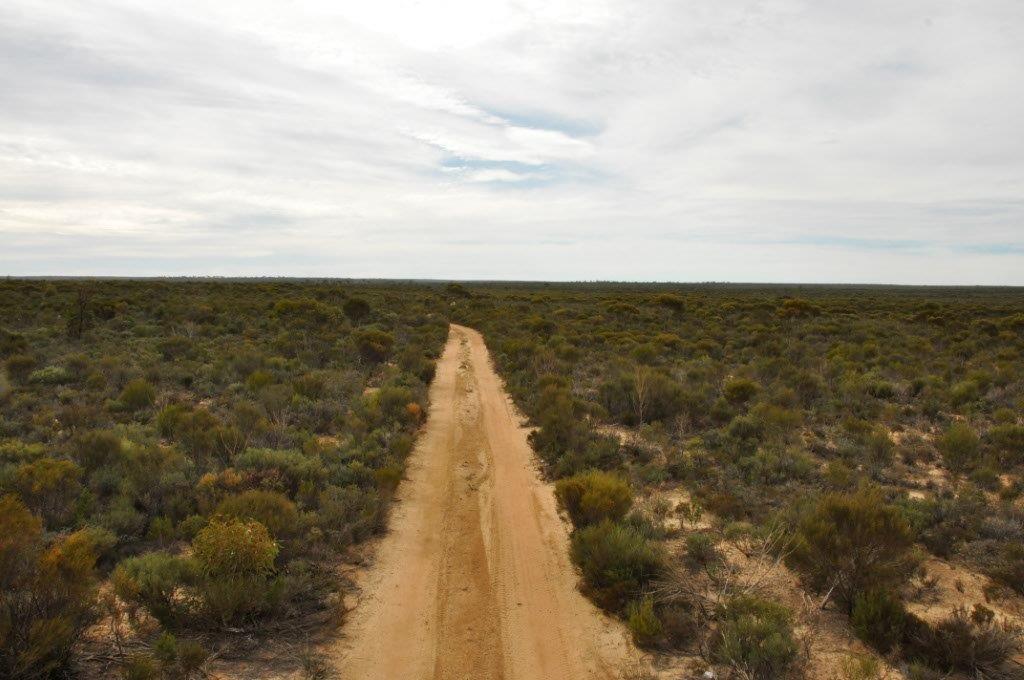 The start of the Holland Track

Where is the Holland Track?

The Holland Track is located in the Goldfields of WA, some 300 – 350km away from Perth (depending on whether you start at Broomehill or Hyden). It runs through to Coolgardie, where it is 560km back to Perth.

About the Holland Track

The Holland Track took 2 months and 4 days to be constructed and is the longest cart road ever made in one stretch in WA. At 538km long, it would have been a mammoth effort. The track shortened the journey of those arriving in Albany and heading to the Goldfields looking for work by 2 weeks!

Back in the 1990’s, a group of enthusiasts re cut the track, and it is now a very well known 4WD track that is enjoyed by a huge number of 4WD, camping and motorbike enthusiasts. 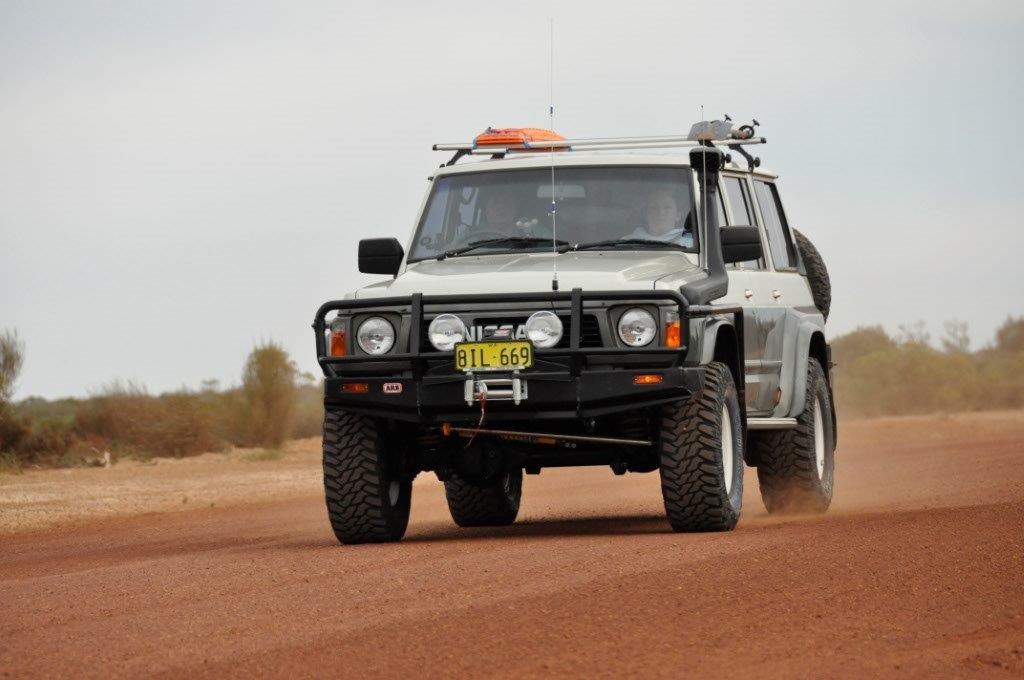 On the way to the Holland Track

How difficult is it?

Throughout the drier months of the year, this track is relatively simple. It has a variety of gravel, sand, salt lakes and mud but has been done a number of times in 2WD vehicles. Once the rain hits though, it’s a different story! In the middle of winter, there are literally hundreds of mud holes and ruts to negotiate.

Some of these can be driven around on ‘chicken tracks’, but a number of them you just have to pick the best route and plough through! We saw a number of relatively standard vehicles make it through the track with no issues after a lot of rain, but you want to have a bit of experience and at least go with one other vehicle.

If you are looking to do the Holland Track with a camper trailer, know that this is done by a lot of people every year. That said, you’d want a mildly capable 4WD, and if its wet, you would be game going without another vehicle to pull you out if you get stuck. 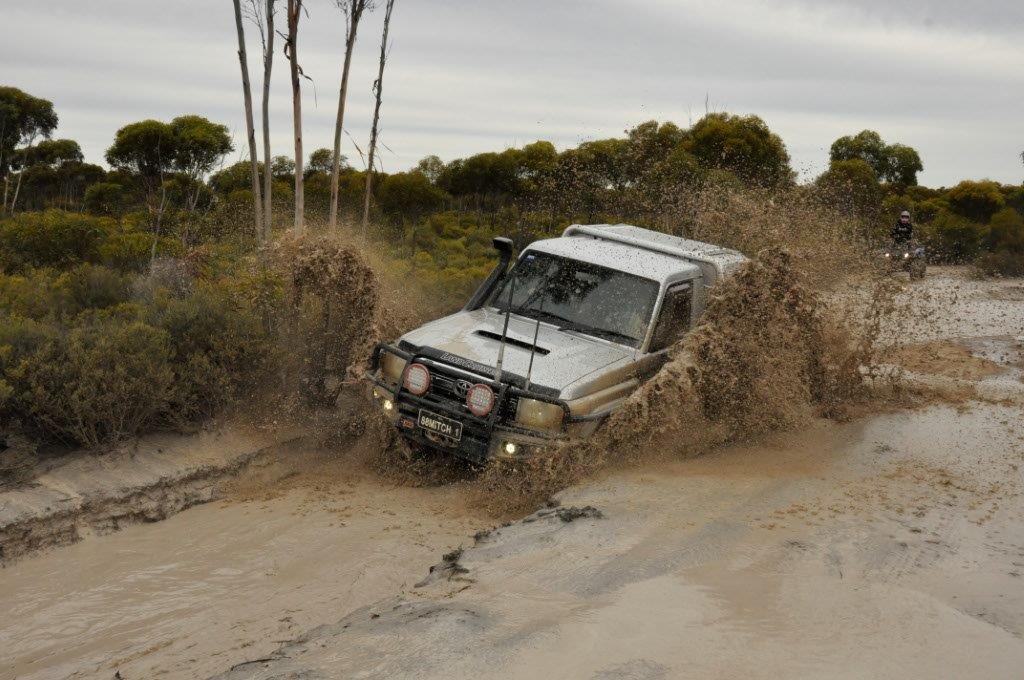 It depends when you go!

It’s a good idea to check the depth of mud holes before you drive through them. However, when there are hundreds that you go through, this isn’t exactly feasable. We stopped and looked at the bigger ones, and went through the rest with minimal effort (but having a well modified vehicle up the front made it comforting!). A lot of these mud holes have big ruts, and if you have standard size tyres expect to drag your diffs over them. 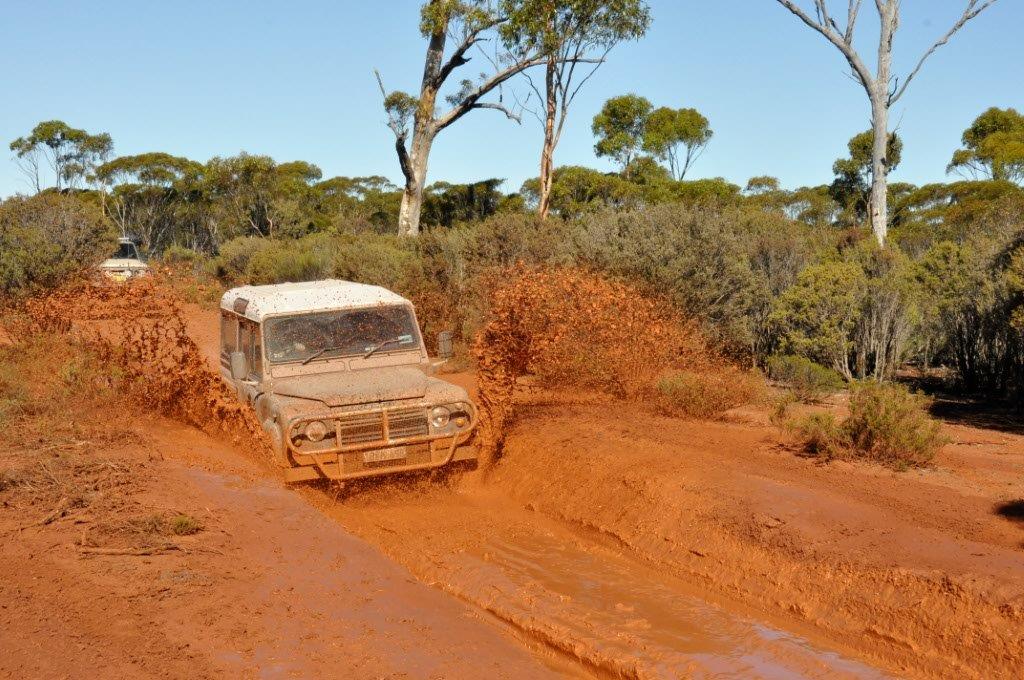 More mud than you can poke a stick at

This can usually be overcome with a bit of extra momentum, but be aware of the water going up and into your engine bay. For the petrol engines, its well worth getting some silicon spray before you hit the track in the wet, as the water will not do your engine any favours. We had a V8 Land Rover with us that was probably running on 3 or 4 cylinders at some stages, because water had gotten in the distributor and all over the leads.

Remember though, Mud is your 4WD’s worst enemy, and despite the fun you can have it is also extremely costly! You wouldn’t be the first vehicle with a failed alternator, or blocked radiator from doing the Holland Track when its wet!

Where can you camp on the Holland Track?

There are a number of better known camping spots on the Holland Track, including Wattle Rocks, Sandalwood Rocks, Centenary Rocks, Mt Holland and Thursday Rock. However, there are plenty of open spaces every 5 – 10km that people often pull up and camp at. 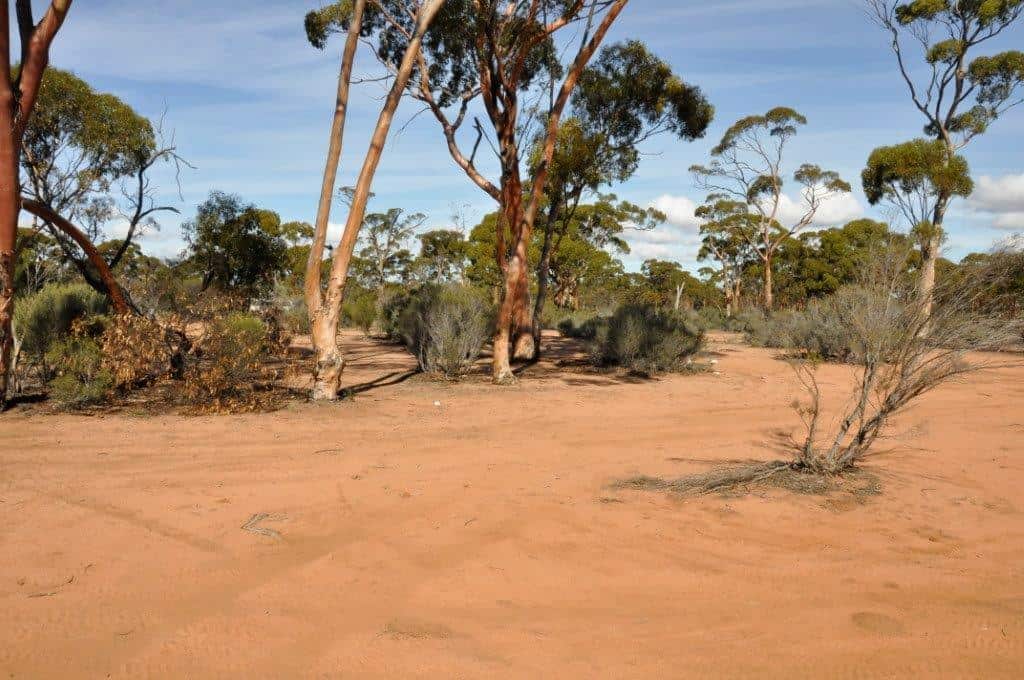 On long weekends, the major camping spots are usually well used (still with plenty of room left) so you can either camp with everyone else, or find yourself a private site on the side of the track.

Wildflowers on the Holland Track

In spring, this area comes alive with a range of Wildflowers. This is also when the weather is good – not too hot or cold, and the track is drying up. If you are into Wildflowers, its a great time to visit! In our opinion, this is the best time to do the Holland Track. There’s a bit of mud around, its cool weather and the scenery is at its best.

Doing the 4WD section only

A lot of people don’t bother doing the section between Broomehill and Hyden, which is basically gravel and bitumen roads. The 4WD section begins 60 odd km out of Hyden and continues through to about 80 km from Coolgardie (which is a gravel road). On a long weekend, I’d suggest doing this, or you end up rushing to get the track done. 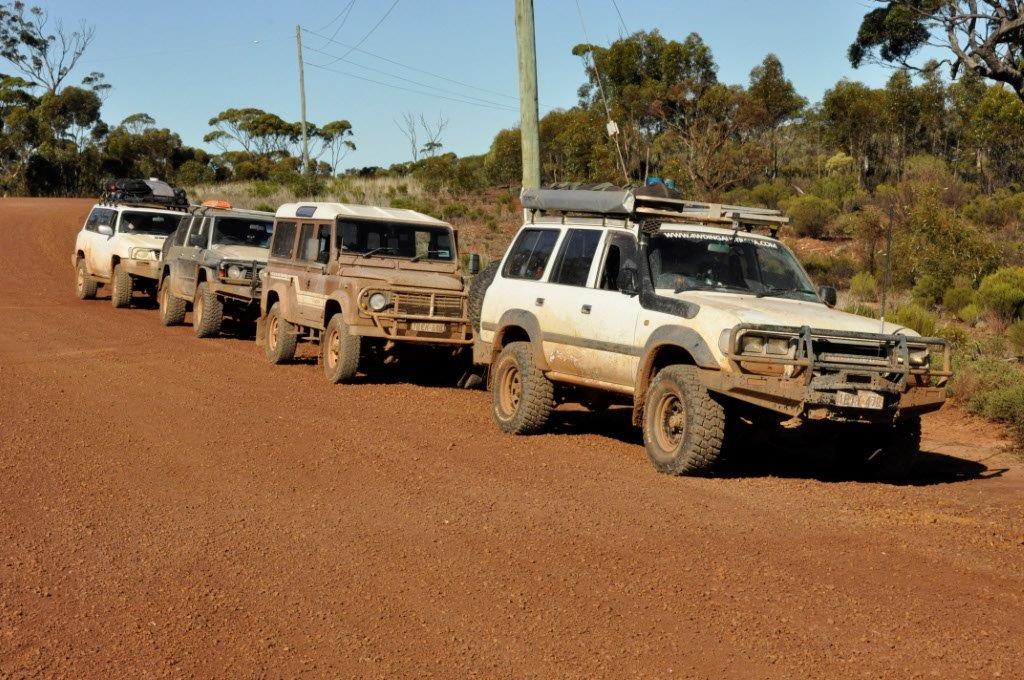 We skipped the 2WD section of the track

The Cavehill Woodlines is another 4WD track which runs very close to the Holland Track. It is similar in a number of ways, and has plenty to see along the way as well.

How long do you need to allow?

To do just the 4WD section of the track on a return trip to Perth, I’d allow 3 days (or a long weekend). We drove down to Hyden on Friday night, camped in the Caravan Park, checked out Wave Rock in the morning and then headed off to start the Holland Track. 2 nights on the track and on the third we were back in Perth.

If you want to do the entire track, leave at least another day, and longer if you plan on including Cavehill Woodlines. Bear in mind the track will take less time when it is dry, as you don’t have to stop to check mud holes out, pick the best line and recover any bogged vehicles! 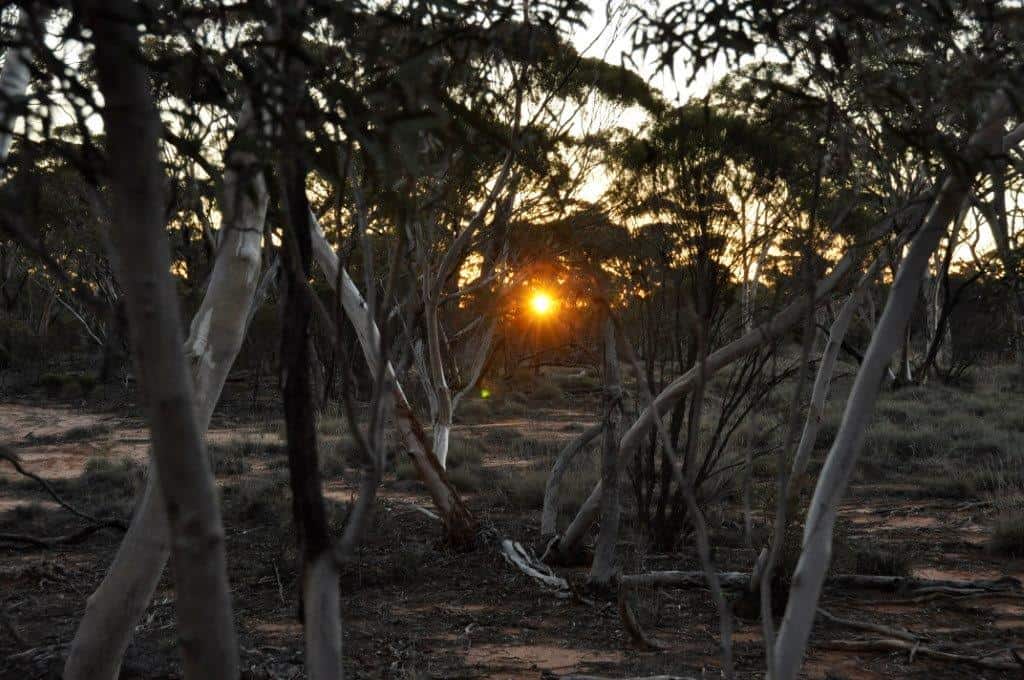 Watching the sun go down

Can you have fires?

Fires are permitted on the Holland track, in season. There is more wood than you ever need, but taking some dry timber with you in the middle of winter is a good idea to get the fire going. As usual, be responsible, and clean up after having a fire. 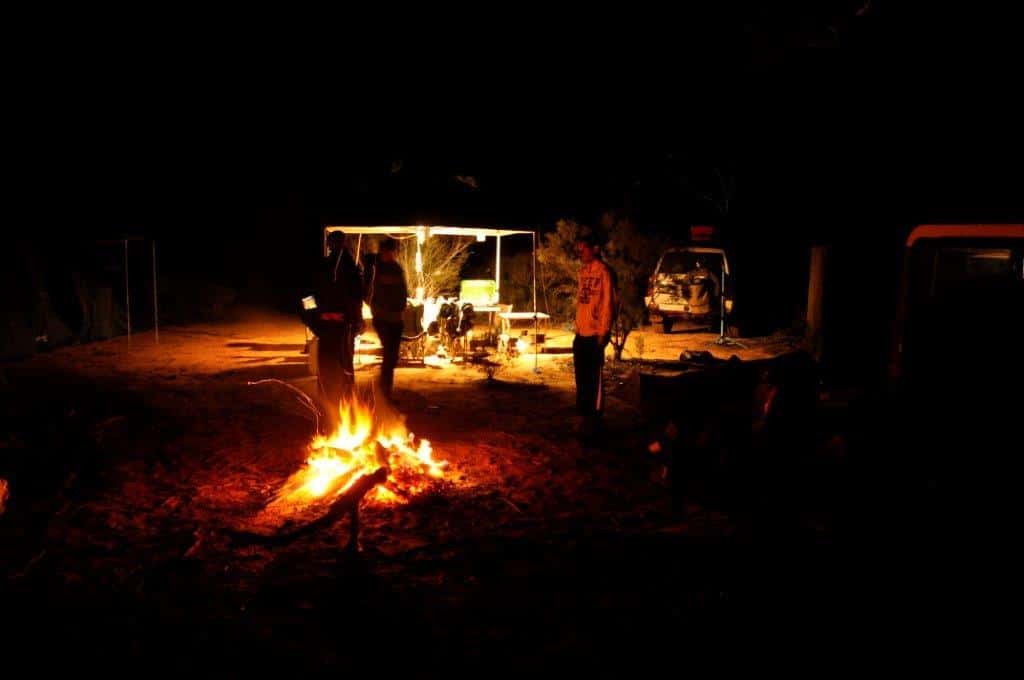 Nothing beats a nice fire on a cold night

Are there any facilities?

There are no facilities on the Holland Track. You need to be 100% self sufficient – water, fuel, food, cooking gear, recovery gear, spare parts, tools and communication ability. You are likely to meet others on the track, but don’t rely on it!

Where can you get fuel from?

The closest fuel source is Hyden and Coolgardie. In between this, there is about 500km of four wheel driving. A lot of it is very basic (but windy) tracks that don’t require much right boot, but it pays to carry additional fuel with you. If you aren’t sure, here’s how you can accurately work out your 4WD’s fuel economy. 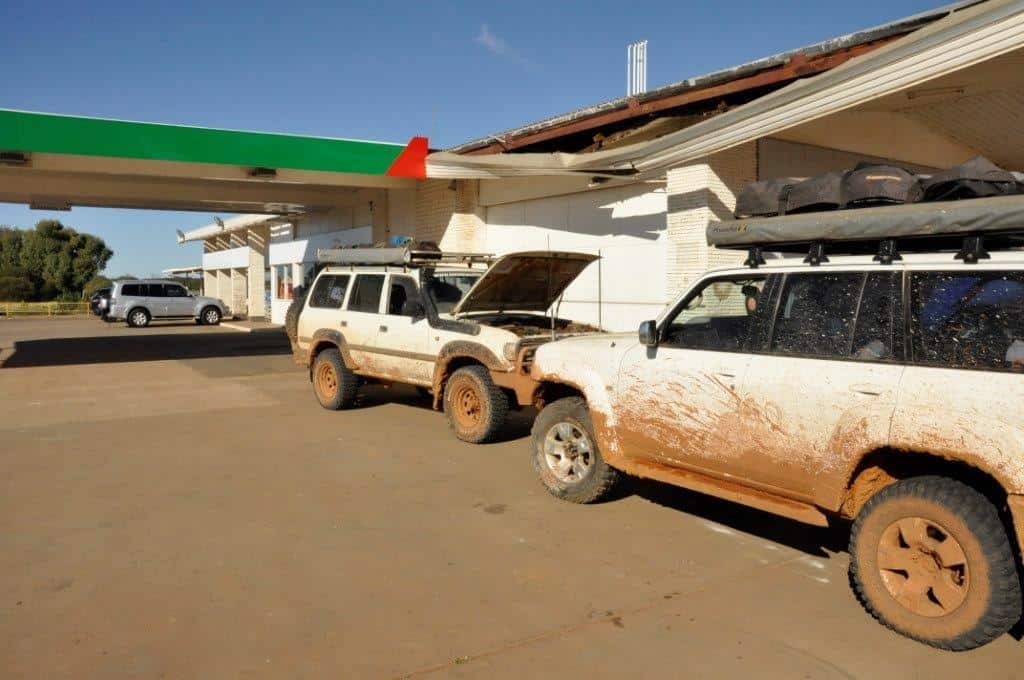 The Holland Track is just as attractive to motorbike riders as it is with 4WDer’s, so keep your eyes peeled and look out for them. Usually these will go with a support vehicle to carry fuel, but we did bump into 25 riders doing the track!

This is a great 4WD track which takes you away from the business of life and has some great challenges in the wet. I’d recommend going in winter/spring, and taking plenty of warm clothes. Whilst it is a bit of a drive, it’s certainly worth every bit of it. 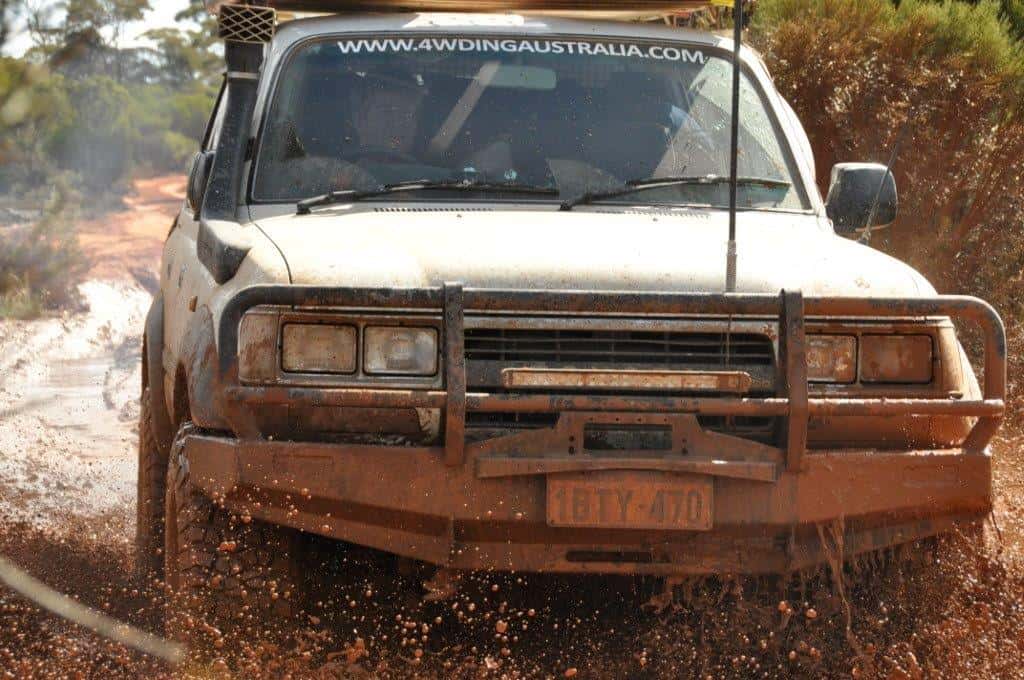 The Holland Track is brilliant

I made a video of our Holland Track adventure – check it out below: