A visit to Mundaring Powerlines in the wet

On Saturday 3 September 2011, we left KFC in Mundaring for a run along the Powerlines track. We started on the Mundaring side, and ended up finishing at around 7PM (and did ¼ of the track in the dark!).

It was an awesome day, and by far the best visit I have had to the Mundaring Powerlines Track. If you haven’t done the track yet, it’s well worth a day out. I learned a number of things (and had other reinforced), and would like to mention them below. 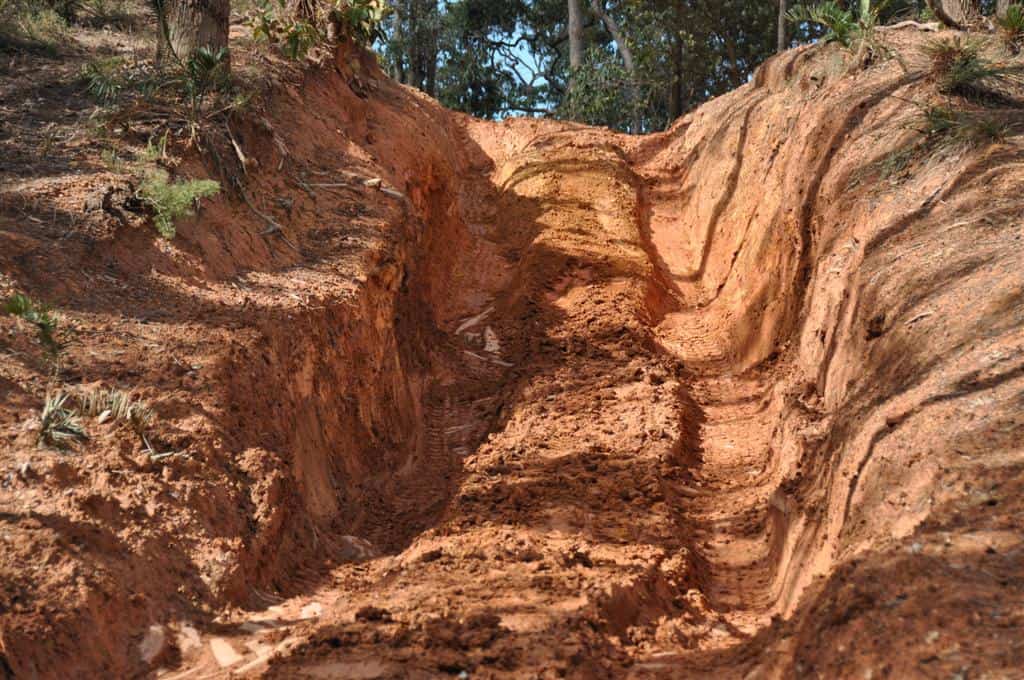 If you visit Mundaring after a considerable amount of rain, I would suggest a 2” lift and some decent all terrains are a minimum requirement. On top of that, you need to have some reasonable knowledge of where to drive your vehicle, and how to safely recover it should anything go wrong. The tracks become incredibly slippery, and even the rocks are very difficult to drive on.

If you want some more information about the track, have a look at Mundaring Powerlines Track.

Avoid the puddles if you can’t tell the depth

In winter, some of the puddles at Mundaring are over roof height of even the big four wheel drives. Almost every time I go out there I see someone drown their car, and it’s totally avoidable. Fixing the engine of a drowned car is expensive, let alone all of the carpet, stereo and other interior damage. If you don’t have a snorkel I wouldn’t be going through anything over about wheel height, depending on how your electrics and air intake are set up. 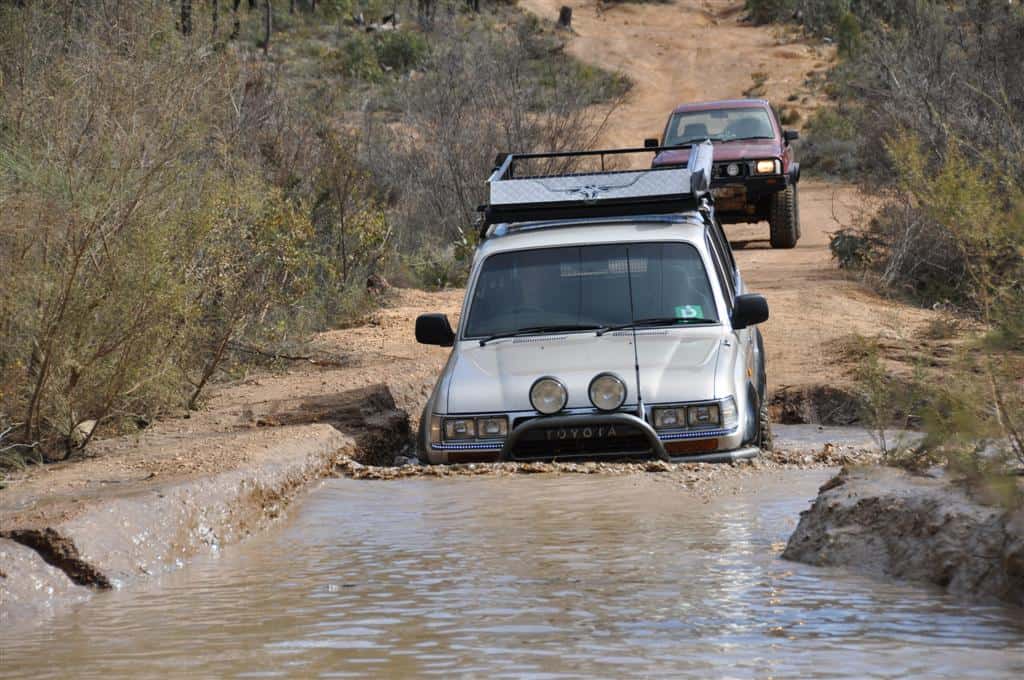 Crossing through water about a metre deep

Things I learned (or had reinforced) on my recent trip:

I came to the large hill that is sloppy and well chewed up and watched a few four wheel drives struggle up the hill. Thinking I would pick a more challenging line, I tried to straddle a huge hole and managed to get passed it just fine. However, further up the hill I couldn’t get any further and upon sliding backwards I ended up with a wheel in the huge hole.

It was by far the worst side angle I have been on, and with a narrow track and the reputation of a Rollux I thought it was going to roll. It tilted, and then started to tip a bit more. With someone standing on the sidesteps to keep the weight down, I managed to reverse back a little bit (very slowly!) and level the car up again! 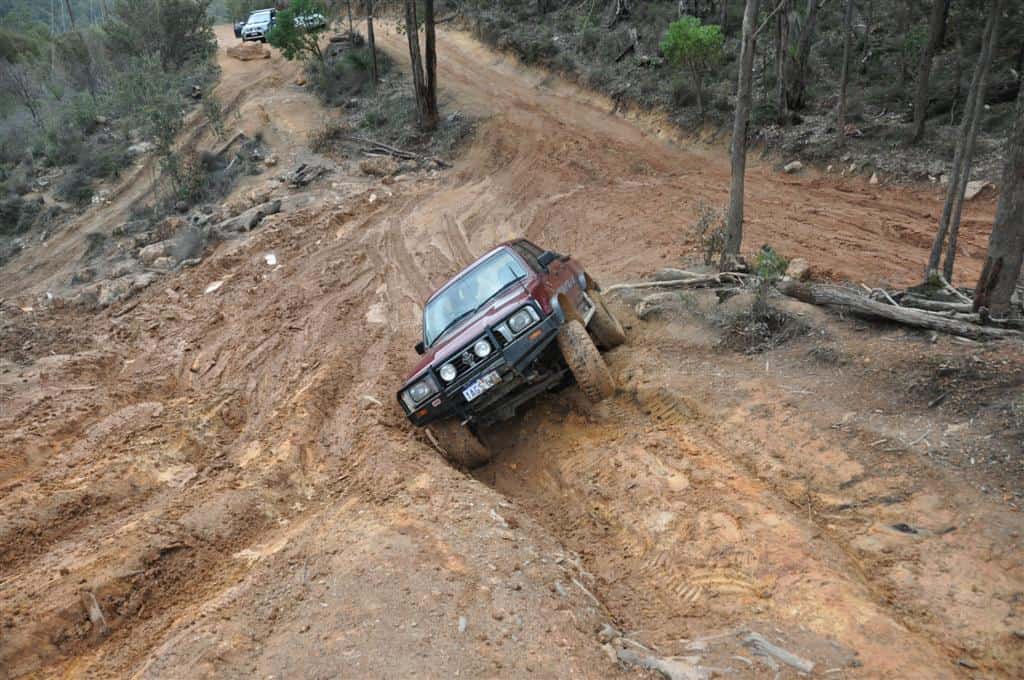 So close to lying over for a nap

To the knockers of traction control (decent traction control that is), do yourself a favour and check a demo out of how it works. Basically when one wheel looses traction, the other wheel on the axle receives the power. If you keep the revs up, when the power is transferred traction is quickly gained with the wheels that are on the ground and the vehicle keeps moving forward.

The Prado that was with us only had a 2” lift, and did 90% of the tracks that everyone else did without an issue. Whilst they might lack a bit of clearance, they sure make up for it in the controlled application of traction! 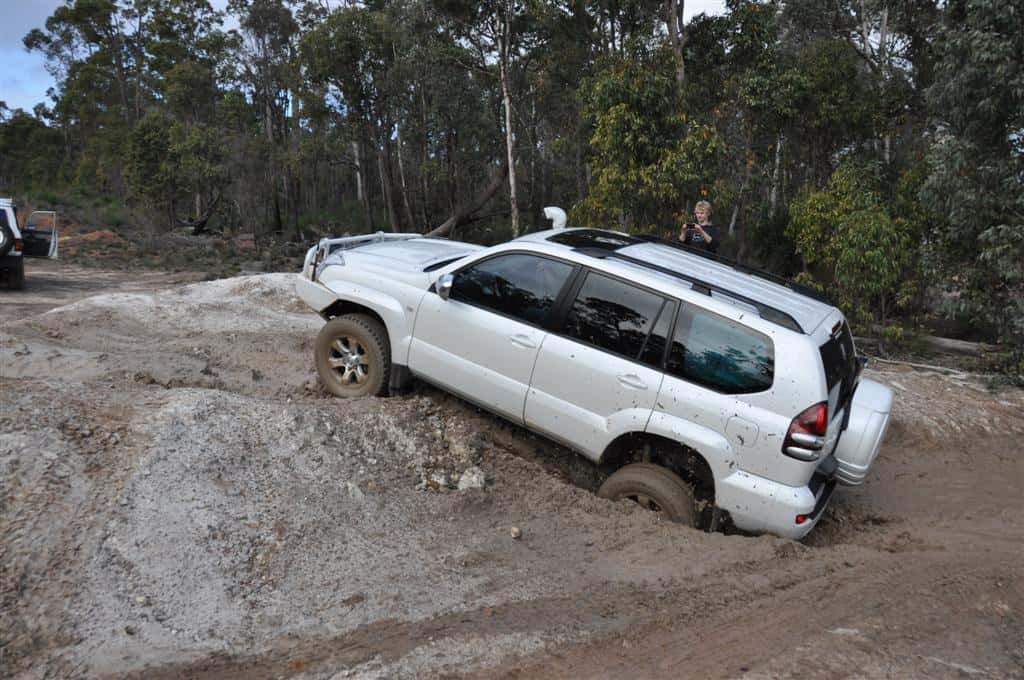 The traction control working its magic

To top it off, they don’t limit your steering at the front like a locker would, and they reduce the chance of breaking a CV by limiting power to wheels that are in the air. The easiest way to snap a CV is to get a wheel in the air and have it spinning quickly. When the wheel lands, it will often grab sudden traction and that force can easily snap a CV (especially if you have big, mud tyres on). Credit is certainly due to Toyota for such an awesome addition to the Prado (one which I initially doubted).

I want to make this general, because I don’t want to point fingers and I am sure we have all come across people that go four wheel driving with no knowledge at all. You seriously risk damage to your vehicle, and people around you if you aren’t sure of what to do. Basic things like knowing how to engage four wheel drive, when to lower pressures, where to hook snatch straps up (and how to do it safely) and the right lines to pick are so important and will save you time and time again.

Mundaring is not the easiest of tracks, and there have been many, many people throw thousands of dollars away (even write off brand new four wheel drives) just because of a lack of knowledge. At the very least, please do some reading on the 4×4 Forums, and even better than that – do an accredited 4×4 Course! It was disheartening to see several new four wheel drives being used with tyre pressures at 40+ PSI over sharp rocks and sloppy clay mud with kids in the vehicle.

At the top of that very large and slippery hill, I watched a GU slide sideways and miss a big rock by about 100mm. He didn’t do anything wrong when driving, but just because of the slippery mud it had a tendency to swing sideways at the last minute. Taking the line further to the right would have been asking for a serious near-roll over, which we found out later on!

I gave the line as the GU a go, and slid sideways on the same line as he did. However, due to a slightly longer vehicle my rear clipped the rock quite heavily and I was expecting some serious panel damage. I was very happy to find that the rock had smacked right into my Kaymar rear bar and the worst of the damage was just a bit of paint scraped off! 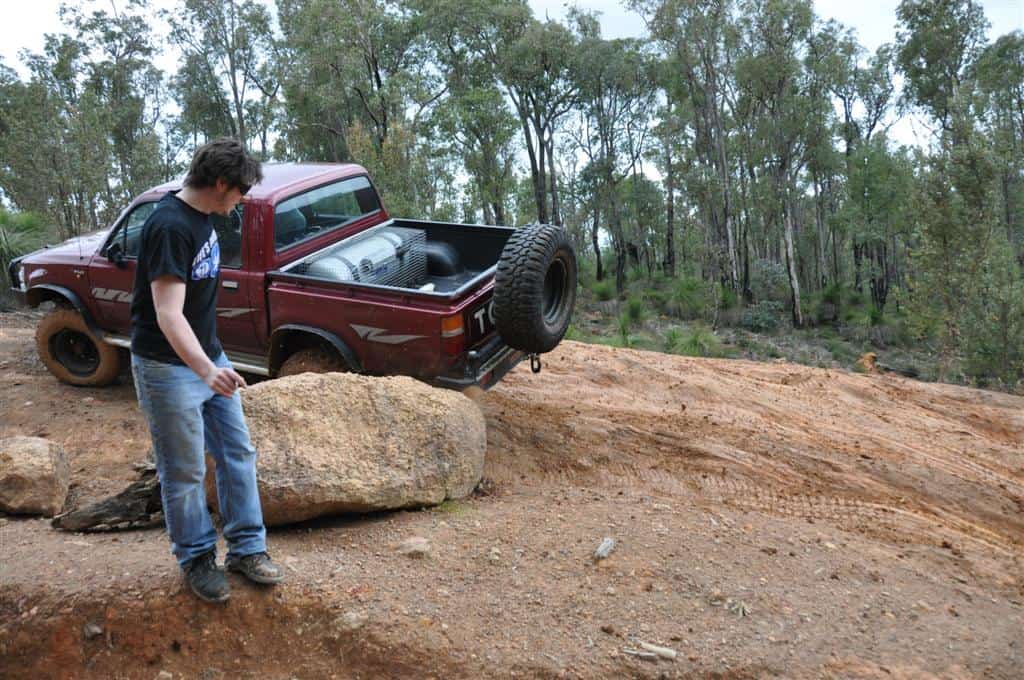 The moment of impact!

Not only does a rear bar provide a functional place to fit a tyre carrier, work lights, reversing lights, jerry can holder and more, but it protects the vulnerable panels that hang off the rear of your vehicle. My Kaymar rear bar has stopped numerous dents, and I would highly recommend a rear bar to anyone doing serious four wheel driving.

I drove up to a few climbs which I was considering giving a go, but backed out as soon as I saw how narrow they were. Four Wheel driving is a lot of fun, but you seriously ruin the day when you dent a few panels. Of course, it does happen from time to time, but when you don’t have to go that way, I prefer to pick a different path.

It doesn’t make you a chicken; you are just using your brains! A number of the climbs at Mundaring should be limited to those who drive competition vehicles, and those who don’t care about panel damage! There is truly nothing worse than seeing a 50k four wheel drive sustain 10k worth of panel damage, and believe me it adds up quickly! 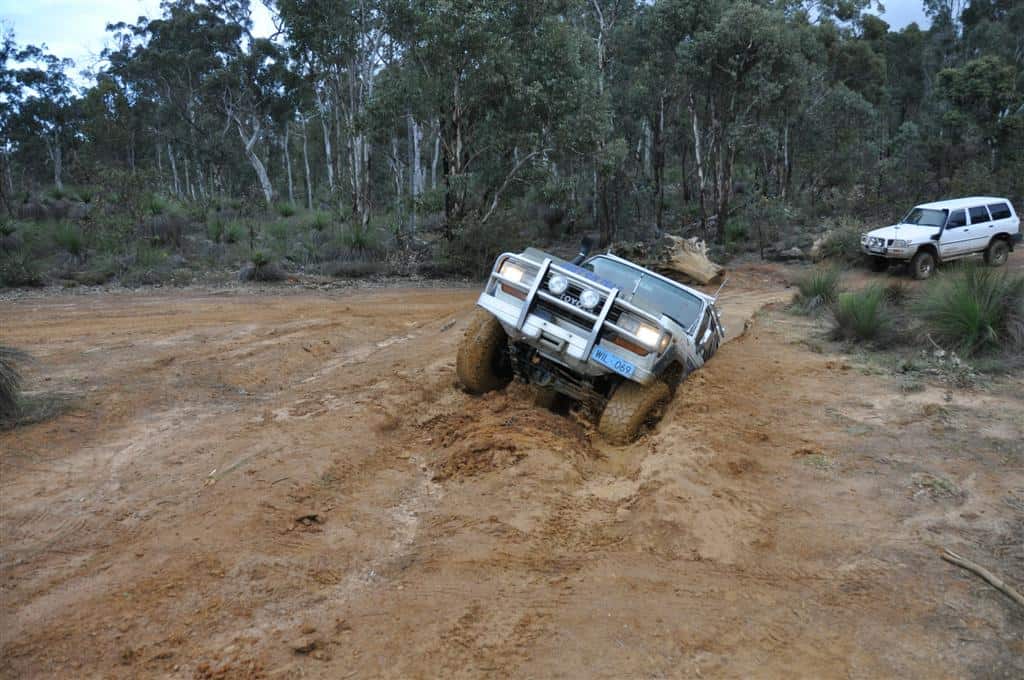 Too close for comfort

My first visit to the Mundaring Powerlines Track was some 5 years ago, and since then it has changed severely. Every winter the tracks get more chewed up, and they seem to get easier over the summer months. However, the track is getting harder and harder, and you need to expect new challenges when you visit! 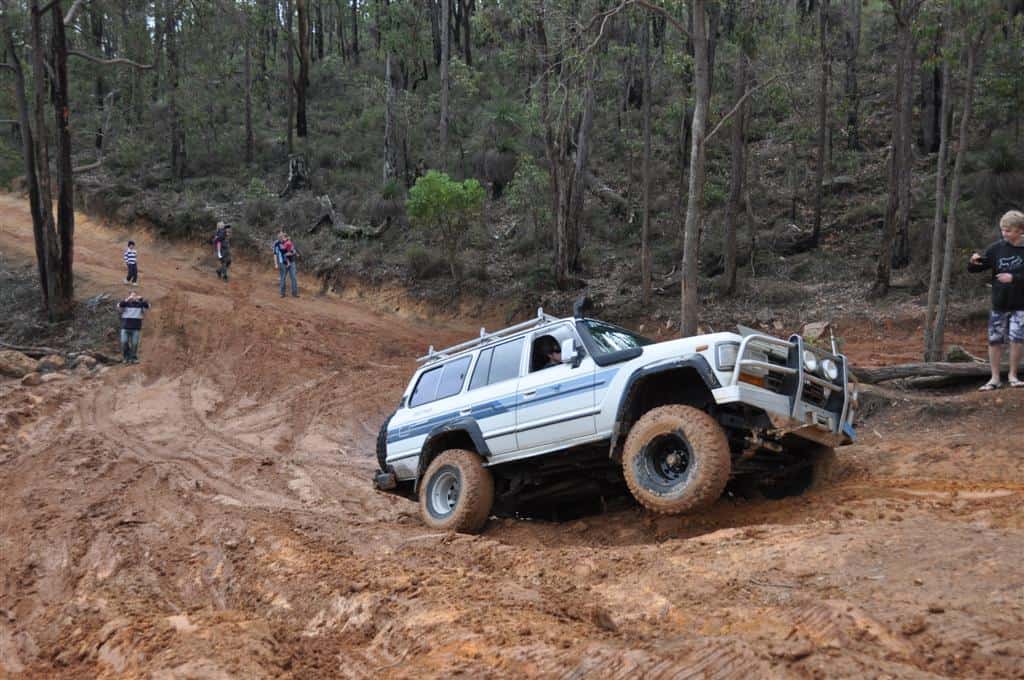 Every time I do the Mundaring Powerlines Track (and other four wheel driving), I become more familiar with my vehicle, and what it can and can’t do. Not only does this allow you to pick more challenging lines, but it allows you to do it safely, to guide other people and in general to have a lot more fun. There is nothing worse than having a fear that you are going to damage your vehicle! 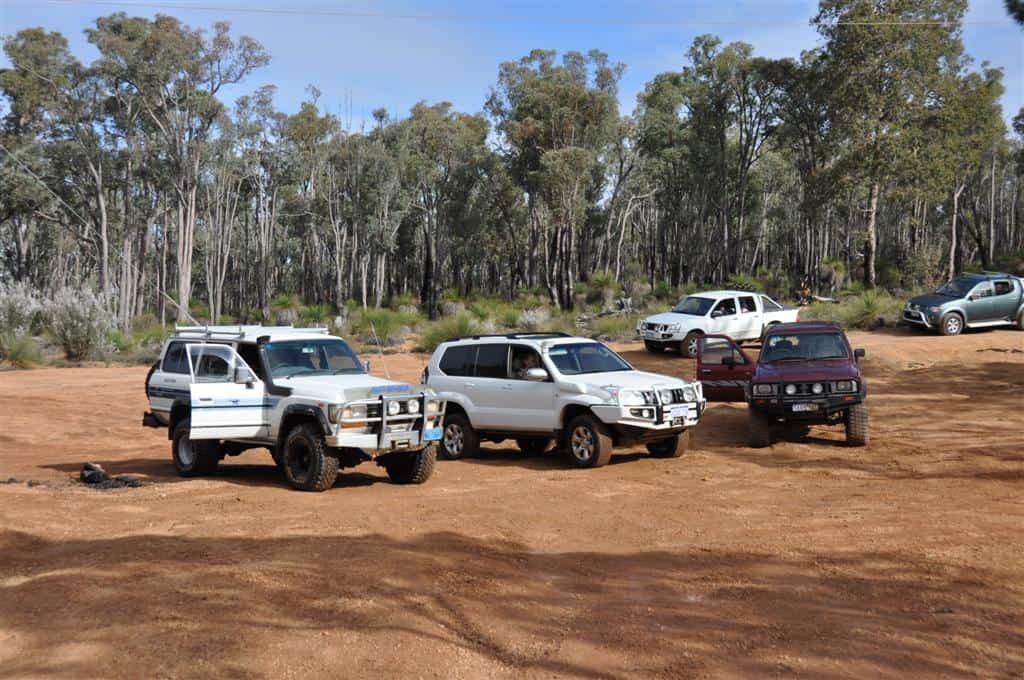 A few of the four wheel drives on the track

I don’t have a snorkel, so I have always been wary of puddles. If you can’t determine the depth, give them a miss. I have seen cars that stand well over 2 metres tall go underwater in some of the puddles at Mundaring in the middle of winter – how will a stock vehicle cope? I heard of a vehicle fly into one of the puddles on the day we went, only to have water coming through the sunroof.

If that is what you want to do, it’s up to you. Personally, I would much prefer to conserve the engine and interior of my car! Having to swim through a muddy puddle, struggle with hooking a snatch strap up to the rear of the car, clean the interior of your vehicle and repair any mechanical damage is not my choice of fun! 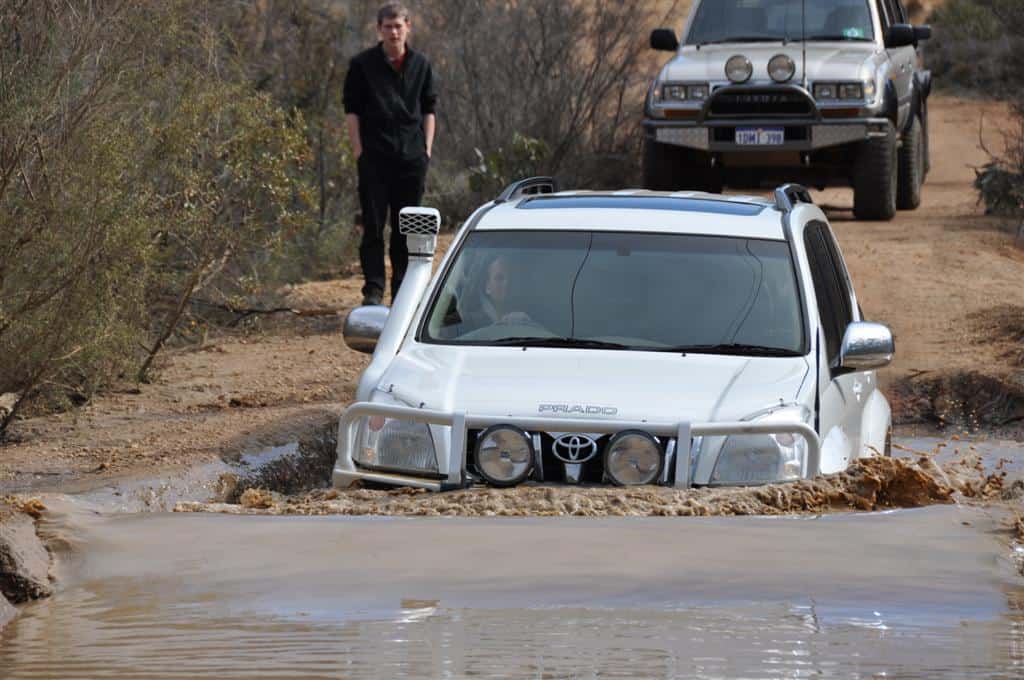 Do you have a snorkel?

All in all, it was an awesome day, and something I should arrange to do more often. Thanks to those who came and to those we met on the tracks.