One of the things that gets a lot of attention when we travel is the solar system on our soft floor camper trailer. I don’t consider it especially incredible, but it is certainly different and raises a lot of questions.

In this post, I’ll cover it in detail, so those who are looking at camper trailer solar panel mounts might have a bit of a better idea of what works.

Alternatively, this is useful for those looking to build a camper trailer boat loader. Whilst I haven’t got boat loader plans, you’ll get a pretty good idea of it from the photos. Some people just want camper trailer roof racks, to put gear or a couple of kayaks, and this would work perfectly too (without the panels!). 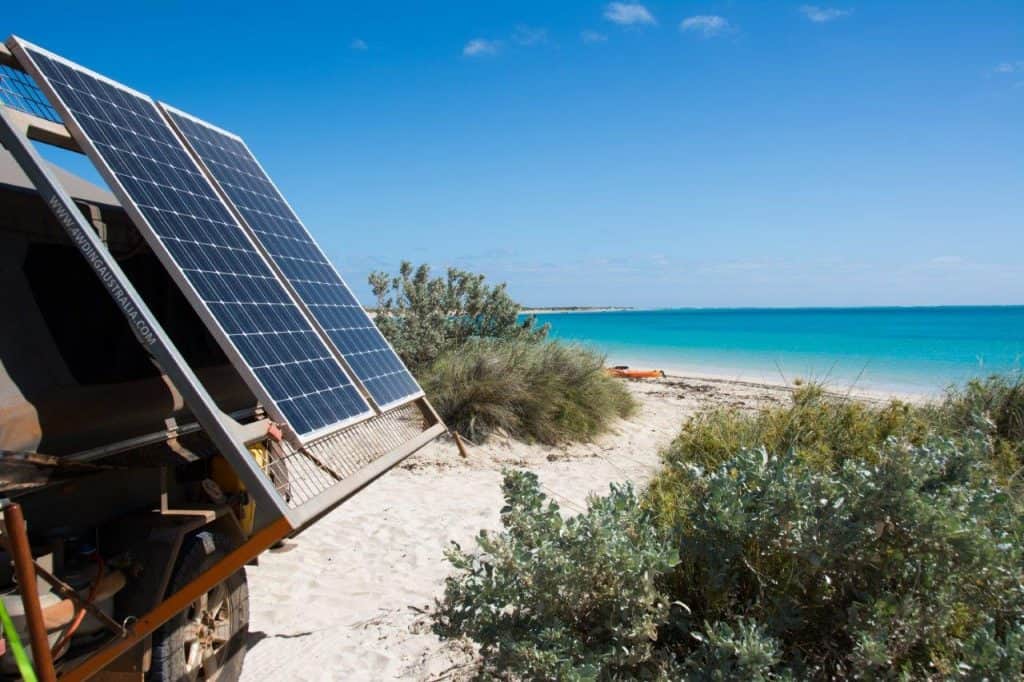 400W of solar, feeding into 270ah of deep cycle batteries on our camper trailer

Making use of the camper trailer boat rack

When we were searching for a camper trailer, I wanted something that had enough payload to take a small tinny, and if it had a boat loader then that was an added bonus.

As it turned out, luck was on our side, and I found an Outback Deluxe Camper which has 700kg of payload and the original owner had done a DIY camper trailer boat rack. To be fair, it’s a bit rough, with some suspect welds and design flaws, but it works.

However, once we got it home, and actually thought about mounting a boat on the loader, it became fairly obvious we were wasting our time. The tinny we had was too heavy, finding a place for all the gear; outboard motor, petrol tank, life jackets etc was too much effort and most importantly, it wasn’t going to get used much.

The reason was simple; when we head away as a family, there’s no way I’d bother heading out in a tinny with myself, and taking Sarah and a little bub out wasn’t going to work either. It’s a fair bit of work getting a boat off a loader and down to the water!

The times that we were going to use the boat would always have other people with us, and so far someone’s been able to tow the boat on its own, which is much better as I spent a lot of time building a 4WD boat trailer.

A few months before a big trip out to Steep Point, we committed to buying another 55L evakool fridge/freezer, and dedicating one to run in the camper trailer to freeze fish fillets and take frozen food for Oliver/us.

At the time, I didn’t think enough about its energy requirements, but after doing some testing at home with an amp meter, I knew the system to run it would have to be substantial.

With a big boat rack ready and doing nothing, I came up with a plan to mount solar panels to it. Asides from the weight and small amount of time to open and close it, I couldn’t see a reason why it’d be a bad idea (and years later I stick by that decision!).

The panels I chose were two 200W 12V panels from Low Energy Developments.

These are 1580 x 808 x 35mm (if you are getting a 200W panel and its smaller than this, there’s a pretty good chance you are being ripped and its not a genuine 200W panel – see this post – eBay solar panels; how to avoid getting ripped off). You can get a 200W panel for under a dollar a watt delivered to your door, even in Perth, so its pretty good value.

One thing that was very obvious to me was that the panels flexed a lot, even when just moving them around. They are only supported around the outside, and I could see that on corrugations the glass would move up and down a lot (mainly around the middle of the panel) and potentially break.

My solution was easy, and cheap. A few lengths of 25 x 25 x 1.5mm aluminium angle with 3mm rubber Linatex (industrial rubber) in between them and the glass. A couple of pieces riveted on in different angles with the rubber glued to the aluminium meant that the glass couldn’t move down without the rubber supporting it.

From there, they were solid as, and supported by the boat loader in 3 places along the short side. 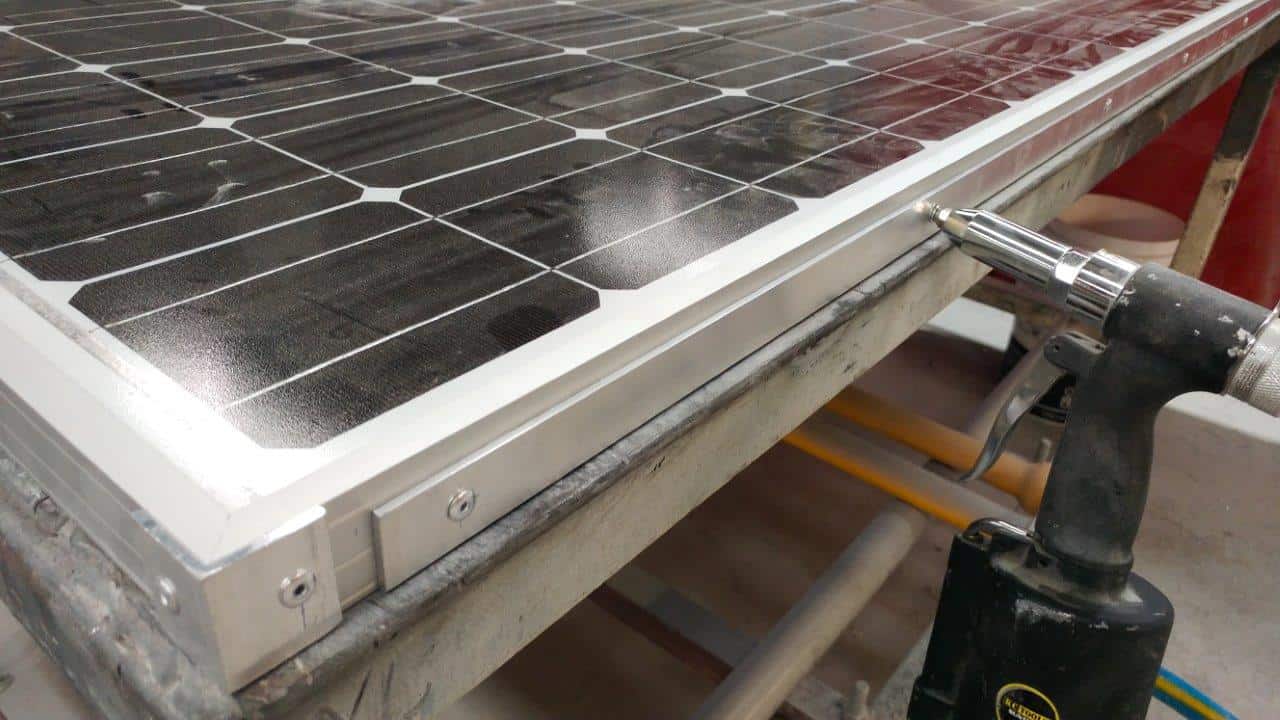 Bracing on the outside to stiffen the solar panel 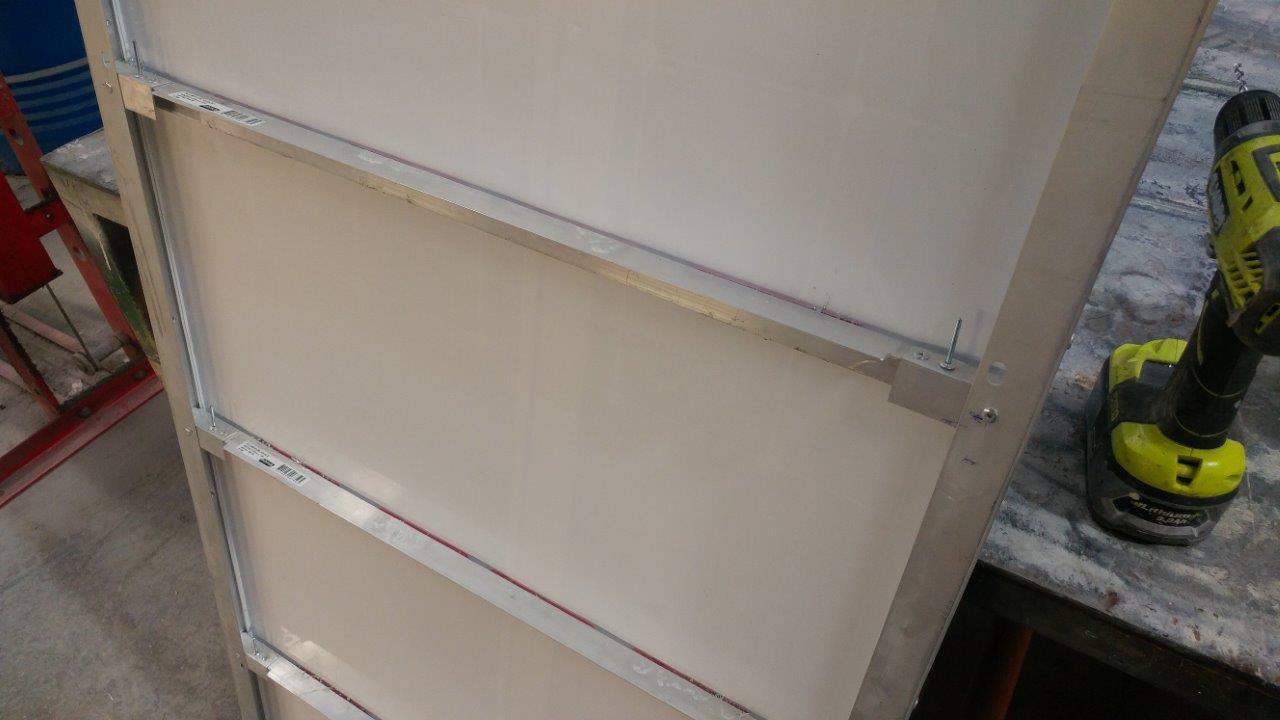 Bracing underneath the panels

I eventually decided on wiring the panels in series through a Victron 100/30 MPPT solar regulator. Being able to take up to 100V means you can run panels in series, or use house panels with the Victron unit, and they are fantastic gear.

I installed the panels on the highest edge of the boat loader, using a couple of cheap, zinc plated hinges from Bunnings. These are removable too, so I can tilt the panel up, and then slide it off if I want to move the panels around (not that you want to, as they are massive and fairly heavy!).

On the other end, I used aluminium angle to bolt them to the boat loader, with a hole for a padlock to go through to stop grubs from taking what isn’t theirs. 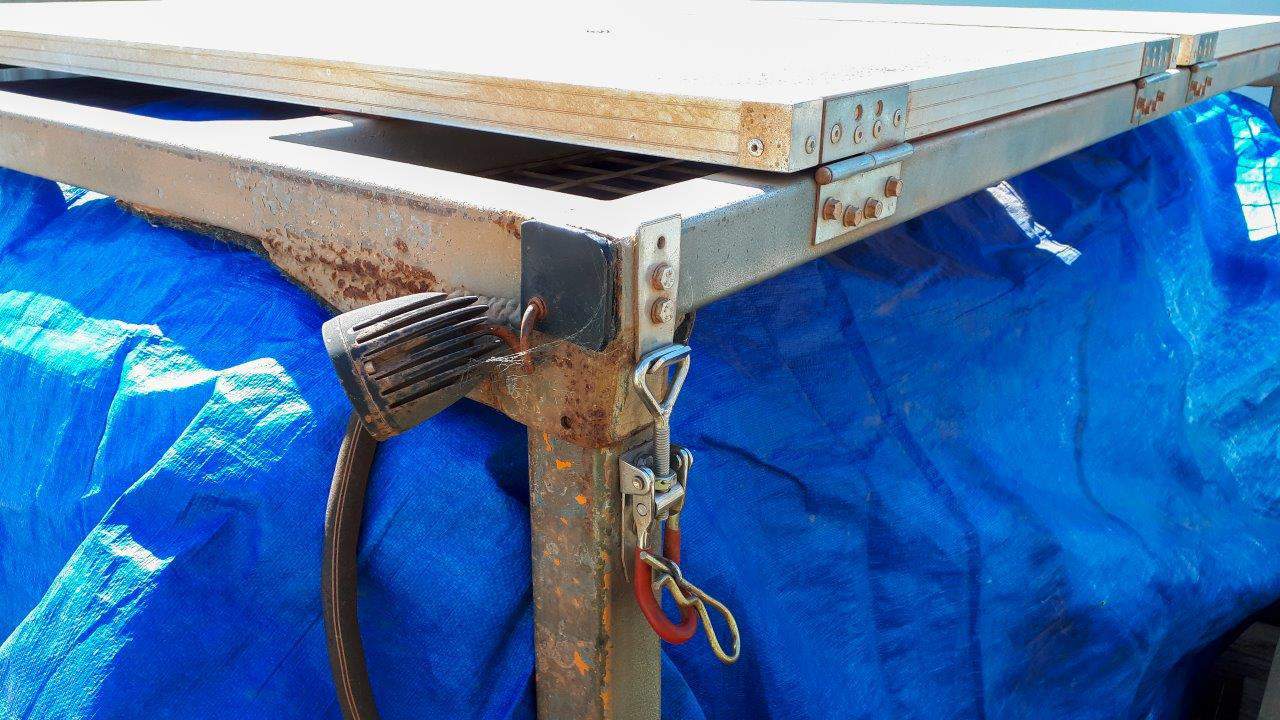 The panels are attached with hinges, and the rack secured with an over the centre latch 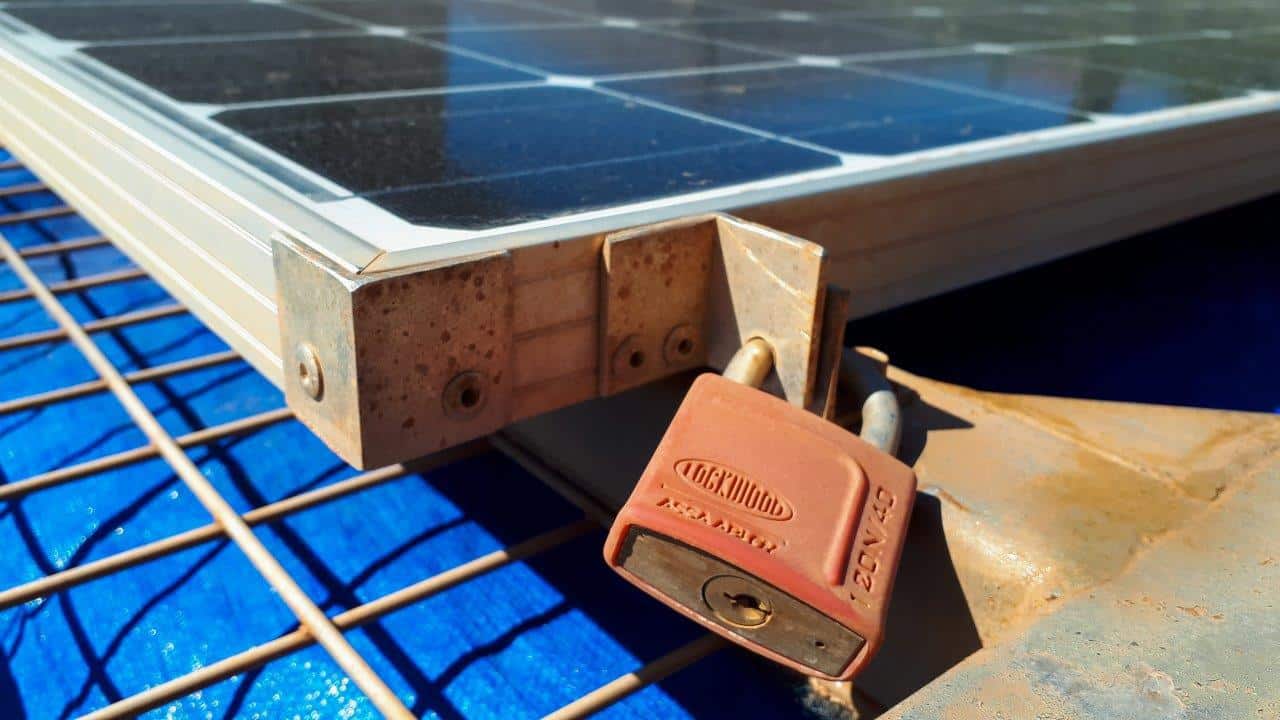 Secured on the other side with a padlock, which allows it to hinge upwards if needed

I modified the boat loader so it opens to 65 degrees, which was about as little as I could go without risking them falling onto the tent. I have a spreadsheet which shows the losses of mounting panels at different angles/directions, and 65 degrees compared to the optimal 30 is negligible losses. 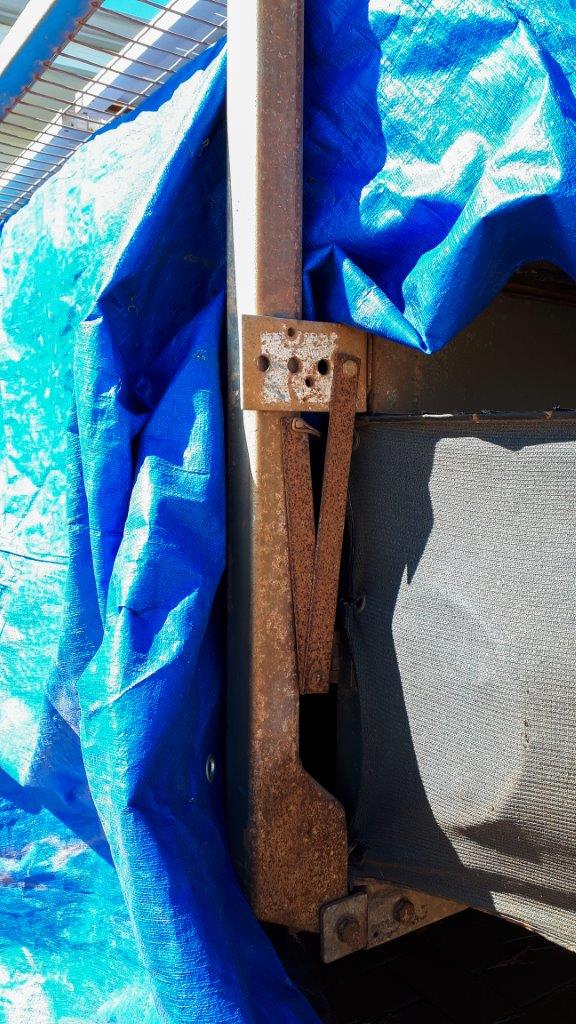 The very basic hinge. Just the weight keeps the rack sitting there

Obviously, direction is very important, and the panels really need to face either north, west or east with no obstructions for 4 – 5 hours a day to charge the batteries up when running our freezer at around -18 degrees.

However, I have made them hinged so eventually (if I ever bother) I can make stands for the other end, and prop the panels up. This will make it so the panels can sit flat, and then the panels can ‘face’ south without any real issues.

The rack tilts down on two legs which are removable via little pins. 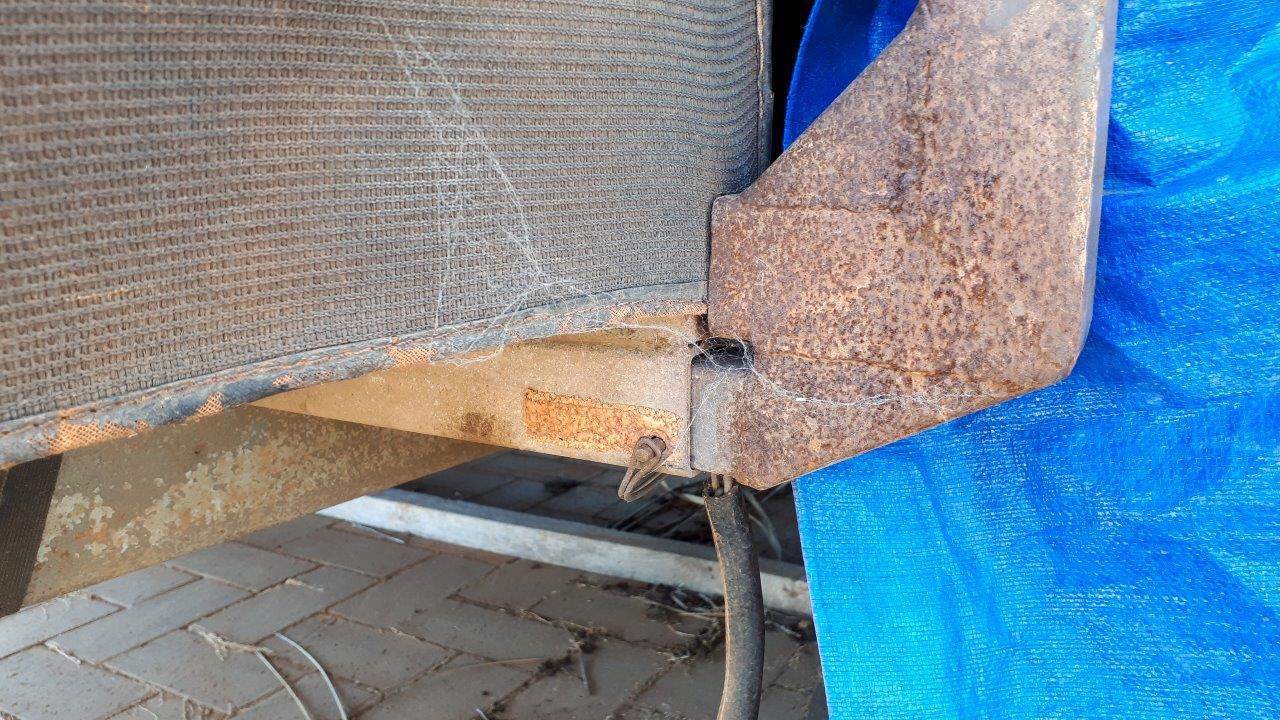 When you get to camp, you undo the over the centre latches, flip the rack up (its maybe 20kg of weight required?), then undo the pins and take both legs off to allow the tent to set up. If its very windy, I’ll tie the rack down with a guy rope or two, but I’ve only done this once.

The electrical cables run through the boat loaders steel,and come out at the back of the trailer, before doing a little loop under the trailer and across to the regulator. 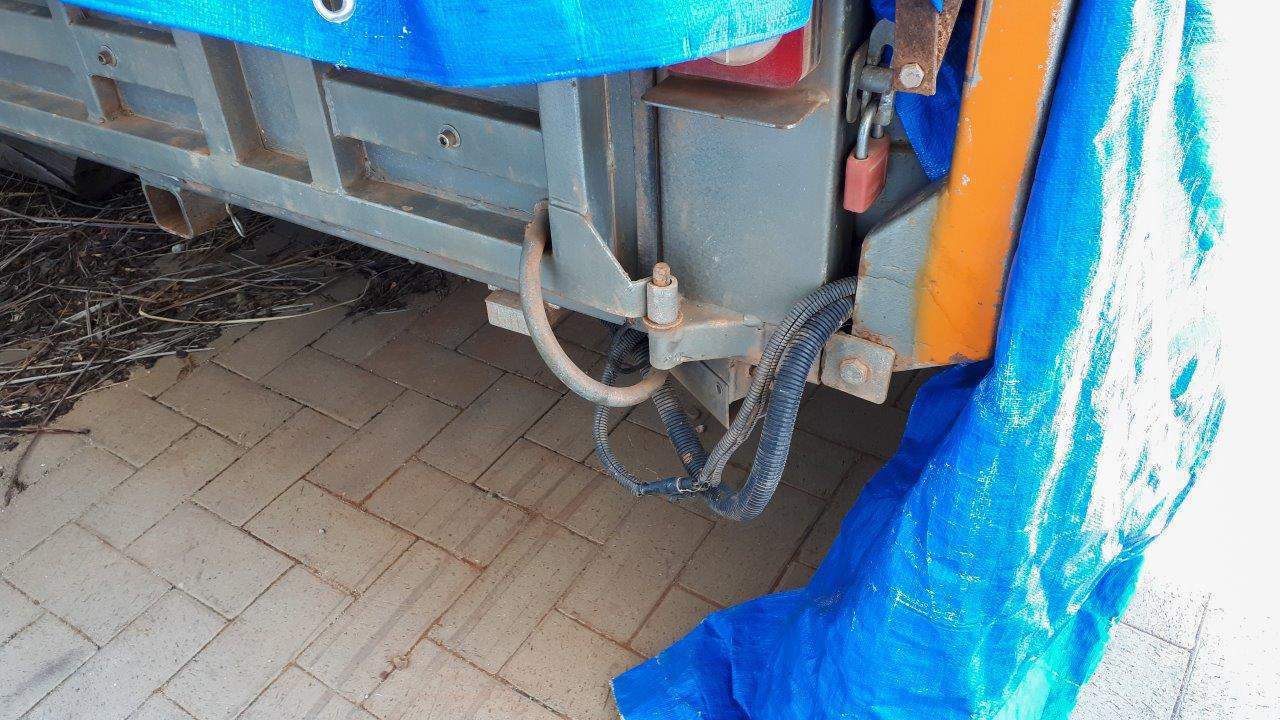 The rest of the electrics

If you want more detail, you can read the full camper trailer electrical upgrade post. However, in summary, the 400W of panels runs through the Victron unit, and into two 135 amp hour Power AGM deep cycle batteries, mounted on one side of the canopy.

These run the freezer, lights and various other appliances that we charge. 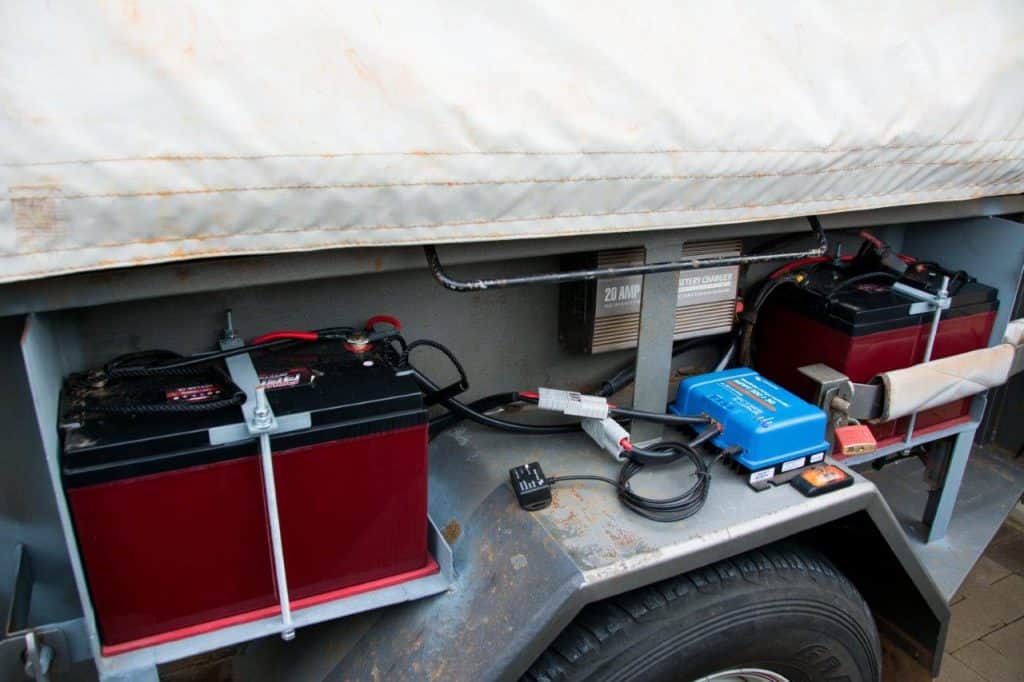 Twin 135aH batteries on our camper trailer. The Victron unit is now in a sealed box next to the DCDC charger

How does it perform?

Overall, I’m pretty pleased with the result. Having a 55L freezer when travelling as well as a 55L fridge makes things so much easier, and this would be impossible without the battery and solar system installed.

The camper trailer is pretty much stand alone; I can get away with 2 days with no charge at all, and about 5 days with minimal solar charge if required.

The camper has a 20 amp Projecta DCDC charger that was on it when I bought it, which runs off the Anderson on the back of the car. It’s very rare that I plug that in, if at all, even when travelling as the panels charge all the time. Even when driving, it will easily do over 1000 watt hours in a day.

If I’m in a really shady area, like some of the caravan parks up north, I can charge the batteries via the DCDC from the car, but I avoid doing this if possible. In Katherine at a Caravan Park, we were in full shade, with just a few very patchy spots all day. It was still doing 150 – 250 watt hours (up to about 20 amp hours) a day.

Facing north, with no obstructions, the batteries on the camper trailer are fully charged by about lunch time every day, and that is proven in all climates (even way up north when its warm).

The maximum power I’ve seen from the panels is about 290 watt hours, or 23 amp hours. The most I’ve seen the system do is just over 1.5kW hours, or 115 amps throughout the day. 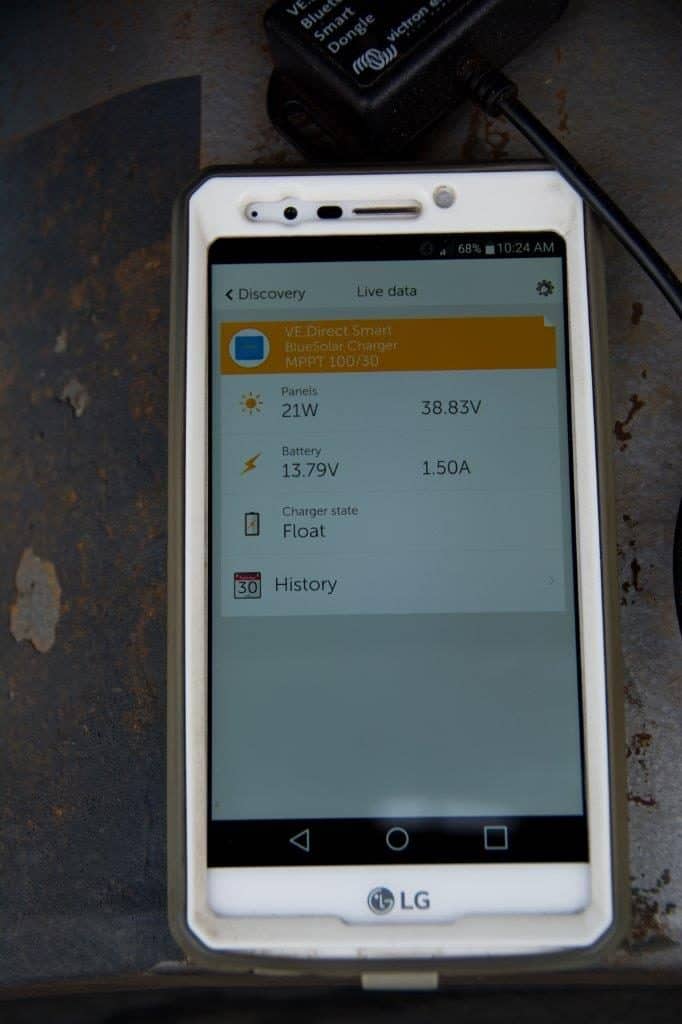 Using the Victron bluetooth app on my phone

However, the system isn’t perfect; often our camp site is chosen primarily because of solar benefits over being in the shade, or nicer spots.

It also means that our camper trailer is dramatically oversize, as the panels swing out on the boat loader opposite the tent, which makes the whole trailer about 8 metres wide.

I definitely wouldn’t go any smaller on the batteries or panels, or there would be times you’d struggle (staying in shady places for sure).

That said, we run the freezer at about -10 to -15 degrees. The food standard is -18, but a lot of people run them at much warmer than that. Obviously the lower the temperature the higher your consumption, and the freezer runs at the moment about 60 – 70% of the time

Trakshak have an interesting boat loader design with panels that fold out from the boat loader, which is worth a look for a different idea.

If you’ve got any questions or comments, let me know below. I’m always up for a chat!