Running an induction cooktop from 12V; what you need to know

A few months back we did a fairly substantial battery upgrade on both our Reconn R2 Hybrid, and Isuzu Dmax. There were lots of reasons behind both upgrades, but it has allowed us to run an induction cooktop on both systems, which is pretty neat. This means we can run an induction cooktop camping, in the middle of the bush with no mains power around.

Running an Induction Cooktop off a 12V system

Induction cooktops are a form of electric stove. They use electromagnetism to heat the pan or pot directly, instead of warming the stove up and the heat transferring through.

What’s the benefits of an induction cooktop?

Induction cooktops offer a number of benefits at home, and even more when you are camping, and off grid.

They are as safe as possible

With young kids around, we are always very cautious not to leave anything too hot where they can reach, and burn themselves. With an induction cooktop, you can remove the pan, and literally put your hand on the cooktop and not get burnt. Do this on an a gas, or electric stove and you’d know about it pretty quickly!

Even at home, a lot of people love induction cooktops because when you change the temperature, the heat difference is basically immediate. On other stove tops, you can turn the temperature up and it has a fairly decent delay in time before it actually makes a difference. On the flip side of the coin, if you want to back the heat off quickly its also much easier to do.

Another point that makes these amazing to cook on is that you can modulate the temperature just by adjusting the wattage slightly. If you want to go from 1400W down to 1300, its a lot easier than trying to turn a little gas knob 1/50th of a turn! 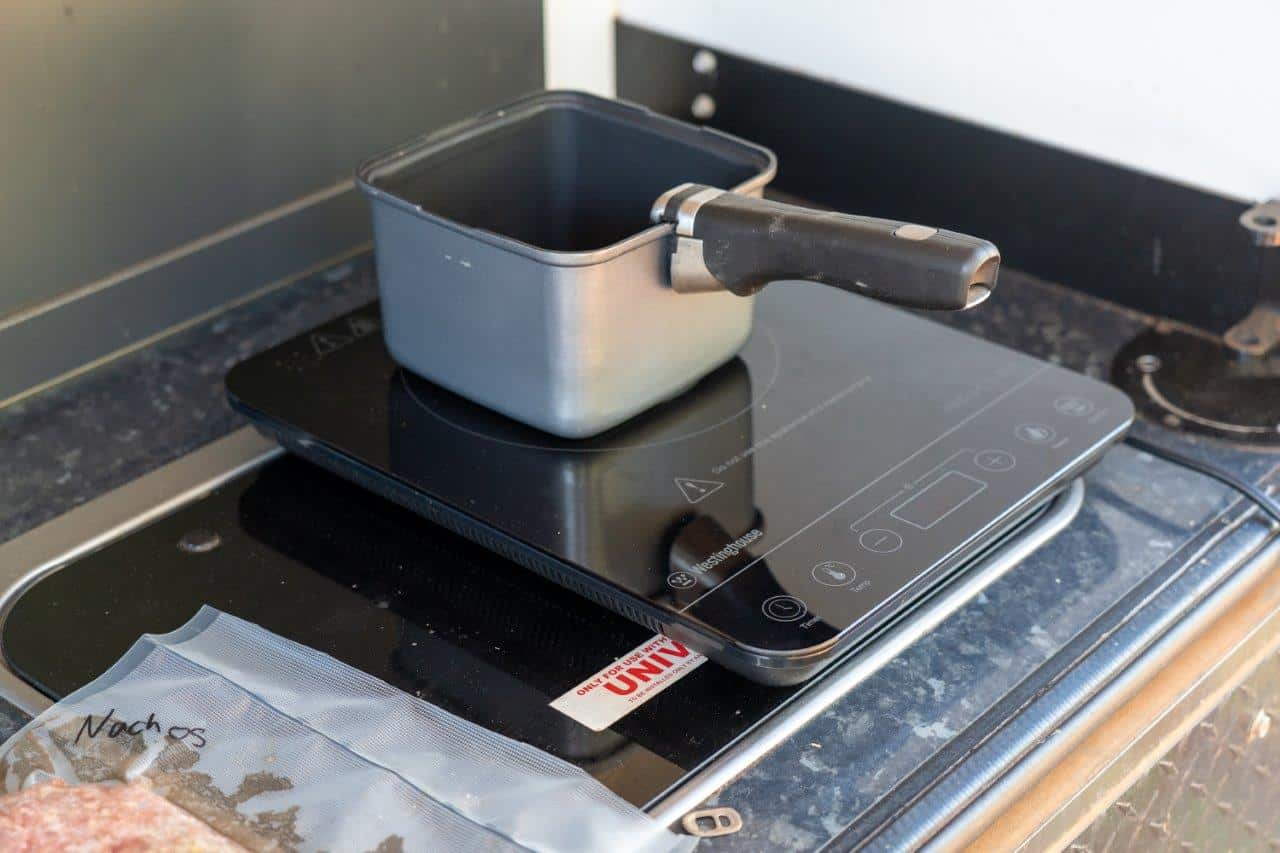 They are very efficient

Induction cooktops put the heat where you want it, and no where else. This means that they are about as efficient as it gets, and that’s pretty handy when you have limited power available. When you compare them to gas, the difference in efficiency is very obvious, especially when its windy as a lot of heat gets blown away rather than going into the pan you are trying to cook with.

On our old camper trailer we were quite slack with cleaning the gas stove up after cooking, and the result was a cooktop that we never really managed to get pristine again. On our Reconn R2 we are careful to wipe it down at least once a location, to ensure nothing goes hard and sticks on.

However, you still have to push the cloth around the tight spots, and its not easy to clean.

An induction cooktop is literally one flat surface, that can be cleaned in a matter of seconds.

They are excellent in wind

One of the biggest advantages of an induction cooktop is the fact that you can use them in heavy wind with minimal effect. If you’ve ever tried cooking on a typical camper trailer gas stove outdoors when its windy, you’d know it can take 15 minutes to boil a kettle, and you end up not only waiting a long time, but using far more gas than needed.

The reasoning is simple; the wind pushes the heat away from what you are trying to warm up, and on some occasions it even blows it out. Our primary reason for wanting an induction cooktop was to overcome the wind, as the outdoor kitchen in our R2 (despite being recessed) still suffers badly if the wind is blowing from the wrong direction.

An induction cooktop is still affected by wind, but to a much lesser extent, and the wind just cools the pan down more than it would if it wasn’t there. In the grand scheme of things you could cook in a howling storm and you’d still get great temperature into the pot. Good luck doing that with a gas stove. 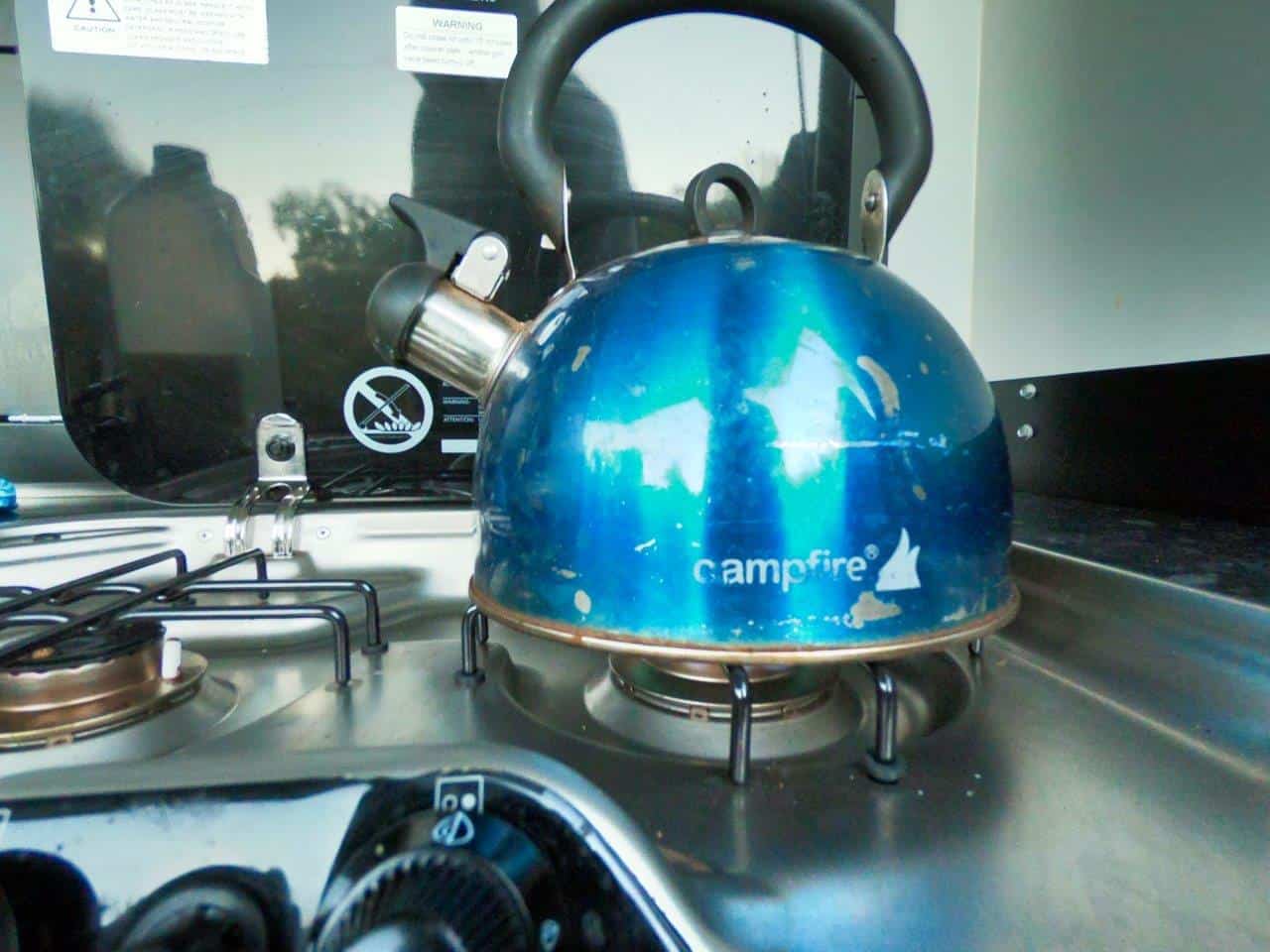 Gas is shocking when its windy, but induction is amazing

The actual induction cooktops are cheap as chips. You can literally buy them for $50, and even a higher end unit with two stove positions are well under $200 mark. If you already have the infrastructure in place to run one of these, it might be a no brainer; its the rest of the system that makes these expensive to install.

You can use them in total fire bans

We’ve found ourselves camping a couple of times during total fire bans, and it presents an interesting problem. If you have an indoor kitchen, you are fine to go inside and use a gas stove. However, if you don’t have an indoor one (like us) you cannot cook anything on gas.

Even a Weber is not permitted, as its not fully enclosed, so our ability to warm or cook anything drops to nothing. You’d literally be eating cold food, or using your parents caravan kitchen to heat things up (like we have!).

Induction cooktops are perfectly fine to use in a total fire ban, which although is rare, it does happen, and we’d never take the risk outside of this.

You don’t need to carry, or refill gas

LPG is pretty efficient, and unless you are running high consumption items like big water heaters, or gas heaters you’ll get quite some time out of a 4kg, or 9kg bottle. However, when it runs out, you have to find somewhere to refill it, and it can be seriously expensive in some parts of Australia.

LPG is also a bit of a safety concern, with bottles not being safely stored inside your vehicle, in an impact zone or near any electrics, and being able to ditch the gas altogether is quite a big advantage. 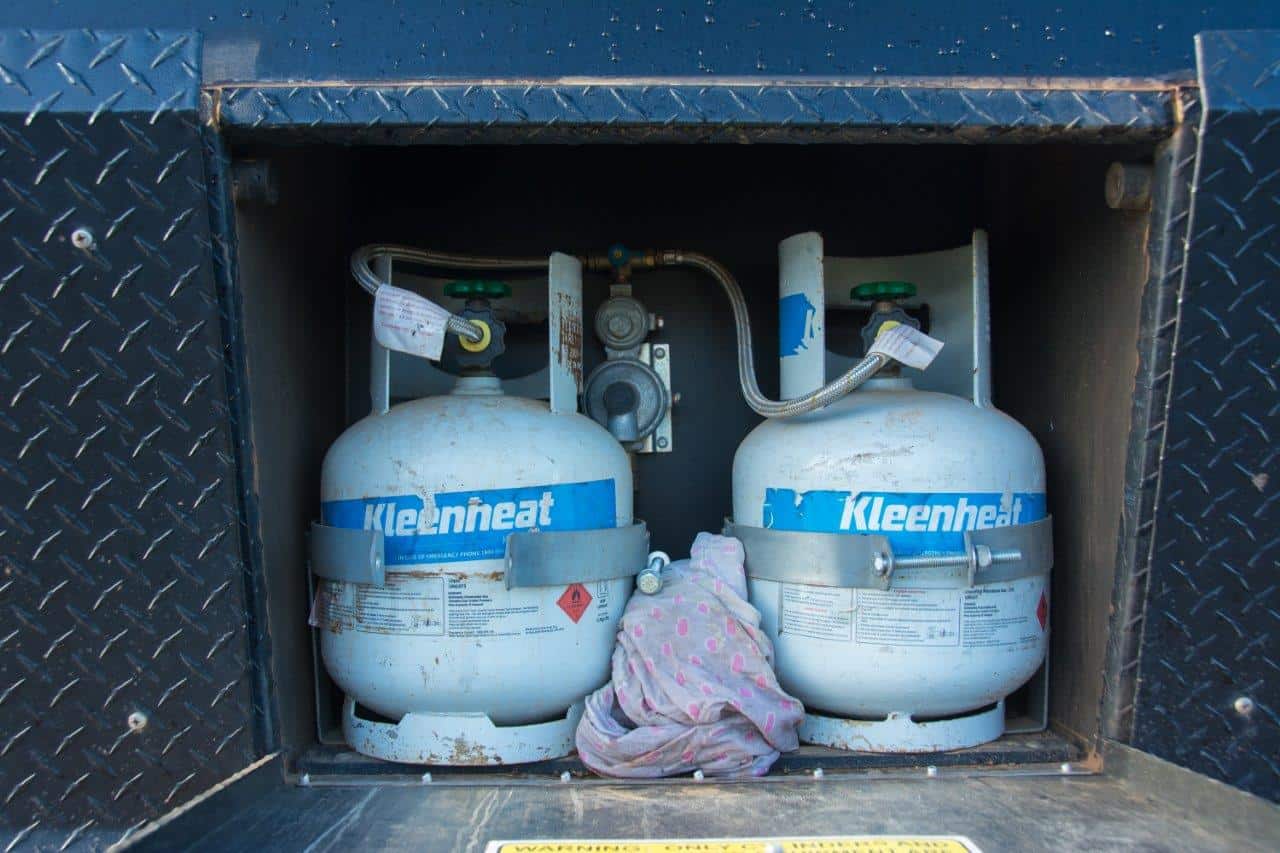 Not having to carry gas around can be helpful

What set up do you need to run one off grid?

If you want to run an induction cooktop off grid, you need some infrastructure to make it all happen. Obviously you don’t have access to a normal 240V outlet, so there’s a couple of alternatives

In essence, you either run it from a generator, or you run it from a significant sized battery system. To make it work, you need a battery (or several batteries) that have the discharge rating suitable for your induction cooktop, enough physical power storage to run your cooker as needed, and you need an inverter and cabling that is up to the task.

You need the right cabling and fusing in place to make this safe and legitimate, and it should work just fine.

On a budget, you can make an induction cooktop run with a system that’s under $1000, but you can spend a lot more if you want more capacity, or higher quality batteries.

There’s quite a few different brands of induction cooktops. The first thing you have to decide is whether you are happy with one or two ‘burners’, and then what wattage you prefer, and the adjustments it has. We like those that display a wattage, so you can physically see how much power its using, and this corelates to heat created.

We’ve gone with a single induction cooktop to keep the weight down, and for the times that we need to do two pots at once we can use the gas setup.

What’s the downsides of induction cooktops?

If induction cooktops were the ultimate solution, every man and his dog would have one. However, they don’t, and the move over is slow, and will not happen in significant numbers for some time yet, and here’s why:

They use a lot of power

Any form of heating with electricity requires a lot of power. You get away with it at home because you are connected to a dedicated grid, but when you are running off battery power it becomes a lot more difficult.

Put it this way; your 12V compressor fridge probably draws about 4 amps when its running. These induction cooktops draw about 95 amps under normal circumstances. Straight away, it rules out a huge number of existing battery systems as they are simply not able to either discharge at that rate, or they are woefully undersized for this new application.

If you are camping, and had to add up the time used on a gas stove, how much would it be each day? I’d say including boiling a kettle to warm water a couple of times a day, you are going to be looking at around 40 minutes a day.

That’s 63 amp hours drawn out of your system each day, just from the cooker. Add in a fridge, freezer, charging other small appliances and maybe making a coffee with a coffee machine, and you can be looking at 150 – 200 amp hours consumed each day, very easily.

This amount of power is expensive to get access to, and this is the primary reason why people are not installing induction cooktops in droves.

Our camper trailer setup (340 amp hours of lithium, with a 3000W inverter, 600W of solar and a 60 amp solar charger) was about $3300 for the parts only and that’s cheap as compared to other, more expensive brands. 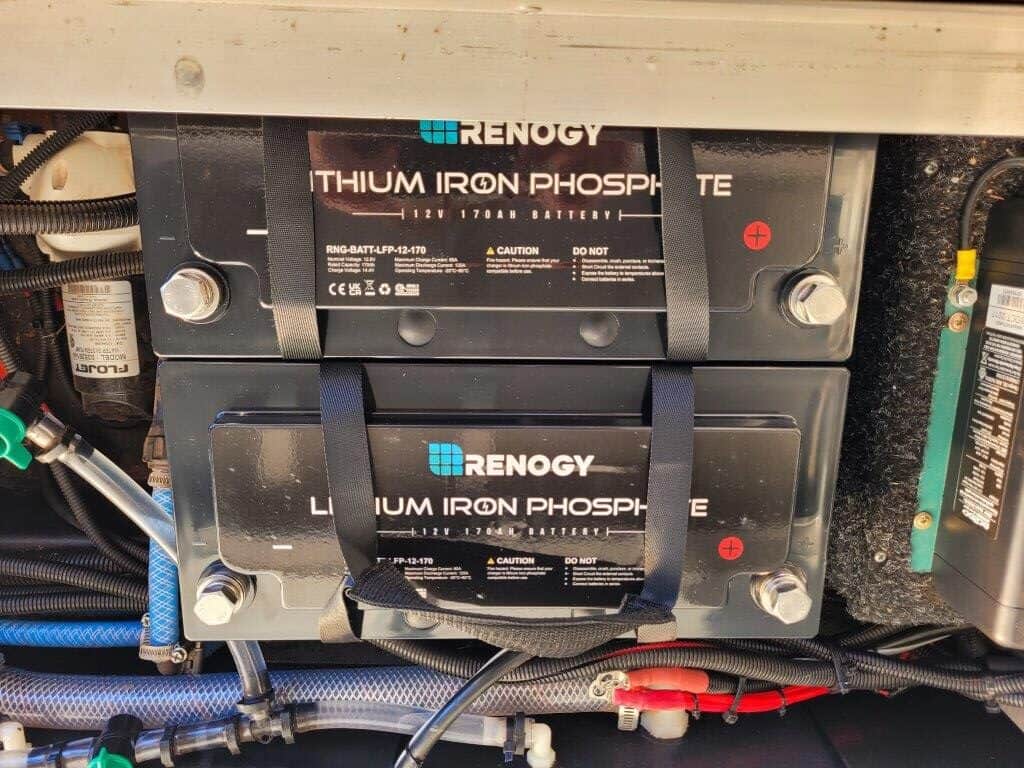 Are induction cooktops really worth it?

As I said above, if these were the ultimate solution you’d see a lot more people using them. They are within reach today, as people are realising that they can run air conditioners and all sorts of other items from lithium batteries, and the system sizes are increasing.

Some Caravan manufacturers are releasing models that have no gas in them at all, which allows them to seal the vans up completely and not have any need for gas vents. 3 way fridges are becoming less and less popular in favour of compressor fridges, and its now possible to have electric stoves, ovens and water heaters, so why bother having gas on board at all?

Whether its worth it really comes down to your situation. If you have to go out and spend several grand just so you can run an induction cooktop, its probably not worth it. However, if you are getting it anyway to run other appliances, or you already have it, or there’s a specific reason to have it then maybe it is.

Why did we get it?

Our batteries were due for replacement, and I wanted to never have to look at our battery gauges again. I also got a great deal on already cheap gear from Renogy on a boxing day sale, and for another few hundred bucks to get the inverter and induction cooktop it was a no brainer. If you want to know why we went with Renogy Lithium Batteries, you can read our thoughts.

We’ll use the inverter to run other appliances too, like a sandwich press, toaster and maybe even a Kettle.

The wind really frustrates us, trying to cook outdoors in the Reconn R2, and this will solve the issue. Obviously it comes at a cost, but its the final piece of the puzzle to allow us to travel long term, off grid.