There are lots of places you can camp in Kakadu National Park. I was surprised to see that majority of the park has bitumen roads, even to the camp grounds, and we prefer to camp away from other people which in general means away from the blacktop!

We stumbled across the Sandy Billabong camp on Wikicamps, and thought it might be a good place to base ourselves for a few nights. It’s about 70km south of Ubirr, and 85km north of Maguk, with quite a few places to check out nearby. 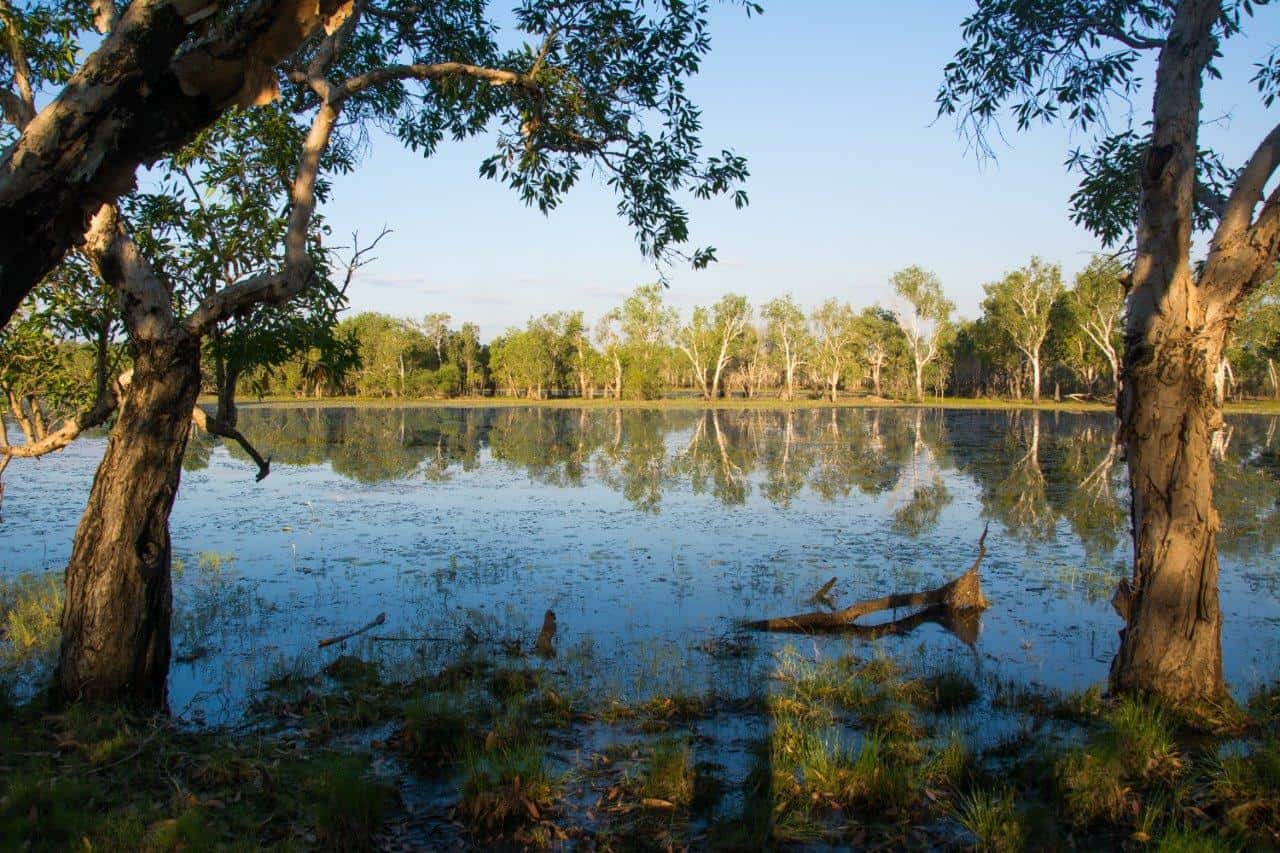 Sandy Billabong, a cheap camp site away from the crowds

The maps, and even Wikicamps, says the camp ground is 4WD access only. However, arriving at the start of the track, the sign says ‘4WD recommended’, which I was a bit disappointed at. Even worse, was we bumped into a Ford Falcon coming out of the camp ground!

You see, 4WD access only campsites are a favourite of mine, as it greatly limits the numbers of those camping there.

The track in is pretty tame. There are a few sandy sections and wash outs where you could easily run into trouble in a Falcon, but you’d comfortably get most vehicles in with a bit of clearance (just know that some of the sandy sections (about 30 metres long) could catch you out.

We saw one smaller Bushtracker caravan, and an ultimate camper/caravan in, but the track is fairly narrow in places and taking a full size van in would be a very stressful drive, if you made it without damage. As usual, our camper trailer just follows where ever we drag it without much fuss.

The track is about 5km long, and if you are in a hurry you can sit at about 40km/h for most of the track, but we took it easier. 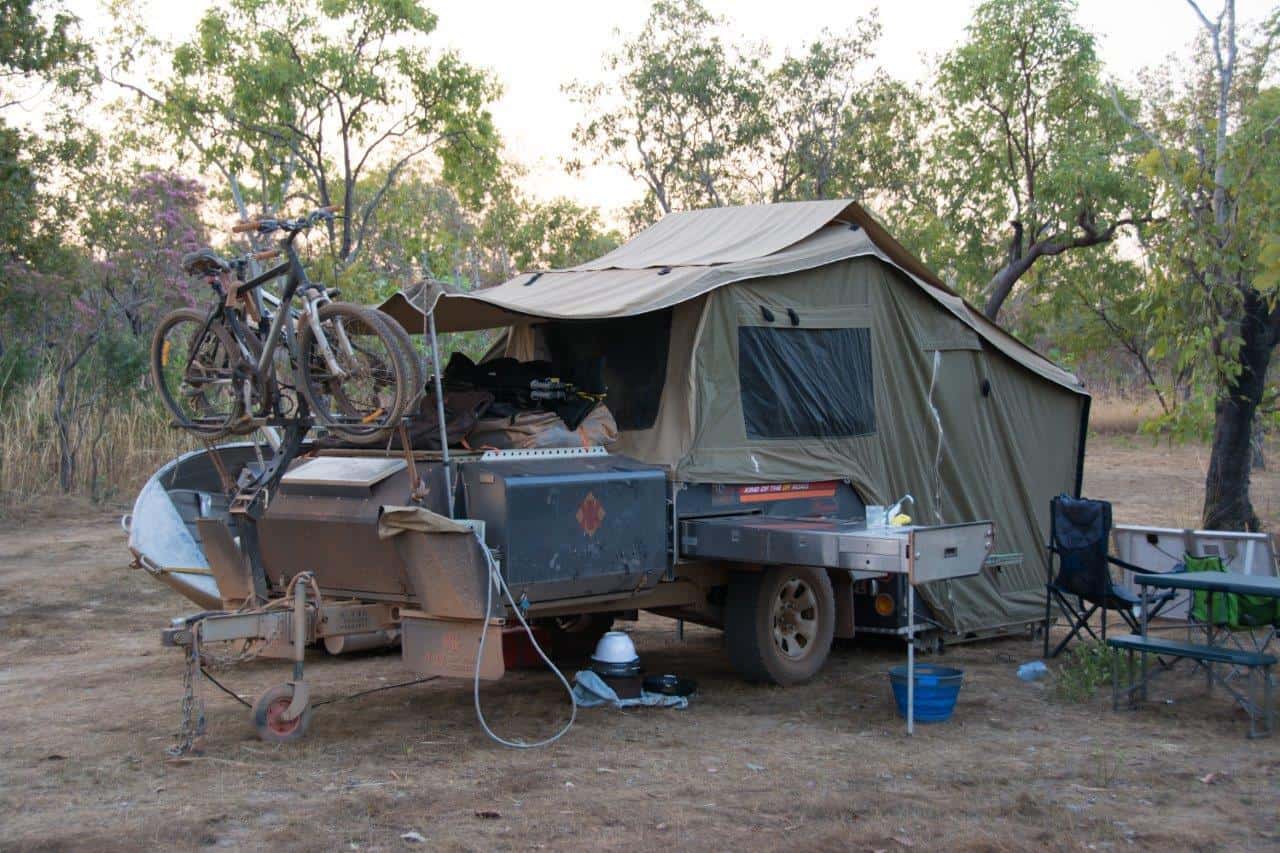 Kick back and enjoy the bird life

There’s not much at the camp ground; its your usual dead, dry grass everywhere, a heap of trees and one toilet for each sex. Shade isn’t an issue, and the site is set back about 100 metres from a great billabong.

We liked the camp ground a lot, but saw a few people drive in and drive out, obviously not pleased with what they saw.

The toilets were clean, and didn’t smell at all. The billabong was stunning (walk down from the camp sites, not the day use area) and its relatively quiet. 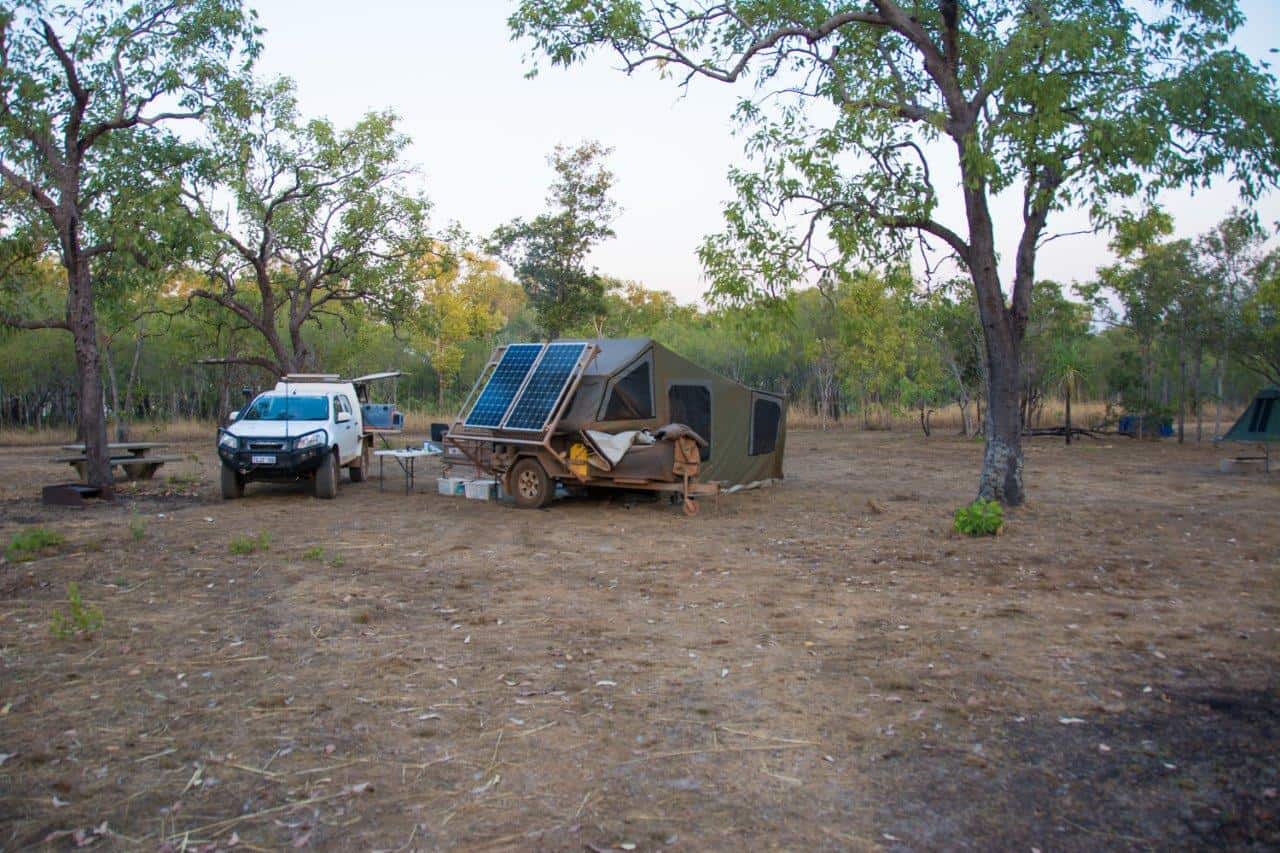 The camp ground is quiet, fairly bare and away from the hustle and bustle

The camp sites at Kakadu are charged based on the amenities they offer. As this only has a toilet, you get stung a whopping $6 per adult, per night. Pretty reasonable, and it operates on an honesty system where you fill an envelope out. Don’t be a twat; pay your fees. We paid a bit extra as we had the wrong change. 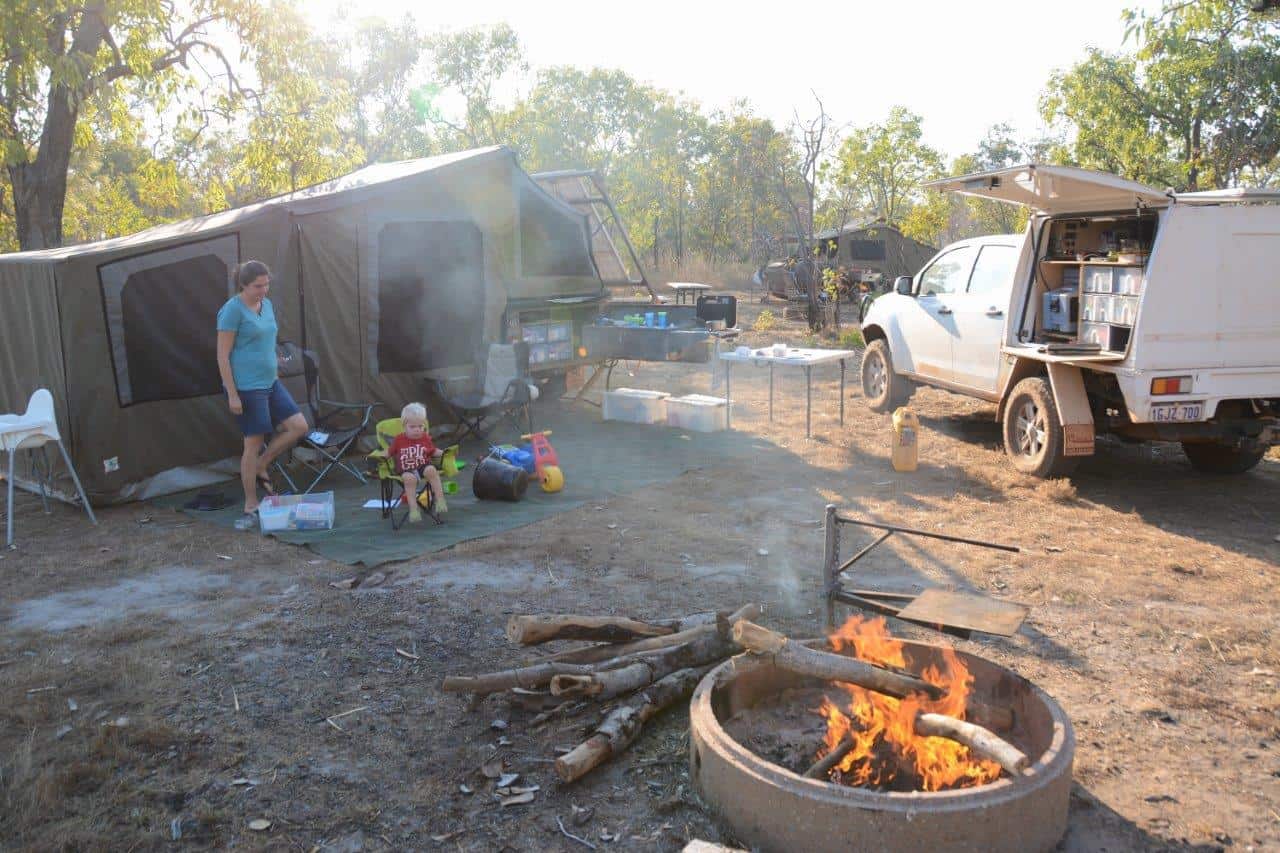 Relaxing around a fire in the afternoon

Mosquitos love water, and given you are camping within 100 metres of a giant Billabong, there are mosquitos around. We took the opportunity to run through about a million different deterrents, to see what actually works, and what doesn’t.

They get worse and worse as it gets darker, and you risk getting bitten without adequate deterrents in place. Given the nasties they carry, its best you do what you can to avoid being bitten! 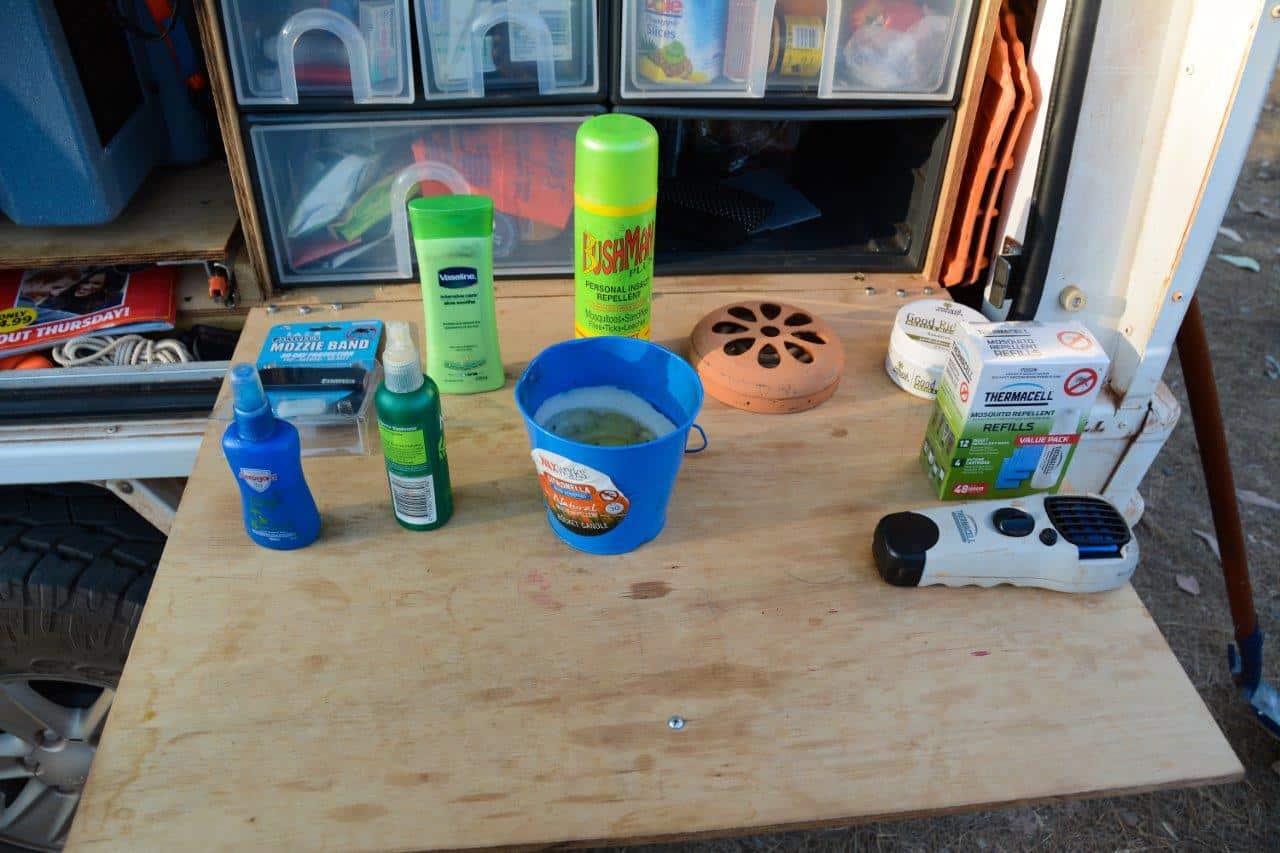 The Billabong next to camp is a proper, Northern Territory Billabong, and has salt water crocodiles in it. Unfortunately, there was a young lady killed here a number of years ago, and you should stay well clear of the water. For more information on how to stay safe, have a read of Crocodile Safety.

Do we recommend it?

Yep, absolutely. Its out of the way, small enough not to get too crowed and a nice break from the packed caravan parks. It is a bit of a drive in (especially as they have a stupid one way system at the camp ground you have to drive past to get in) but its well worth it.

We liked this camp ground, a lot. Koolpin Gorge was even better, but you need a permit and its a fair bit of extra effort to get there. 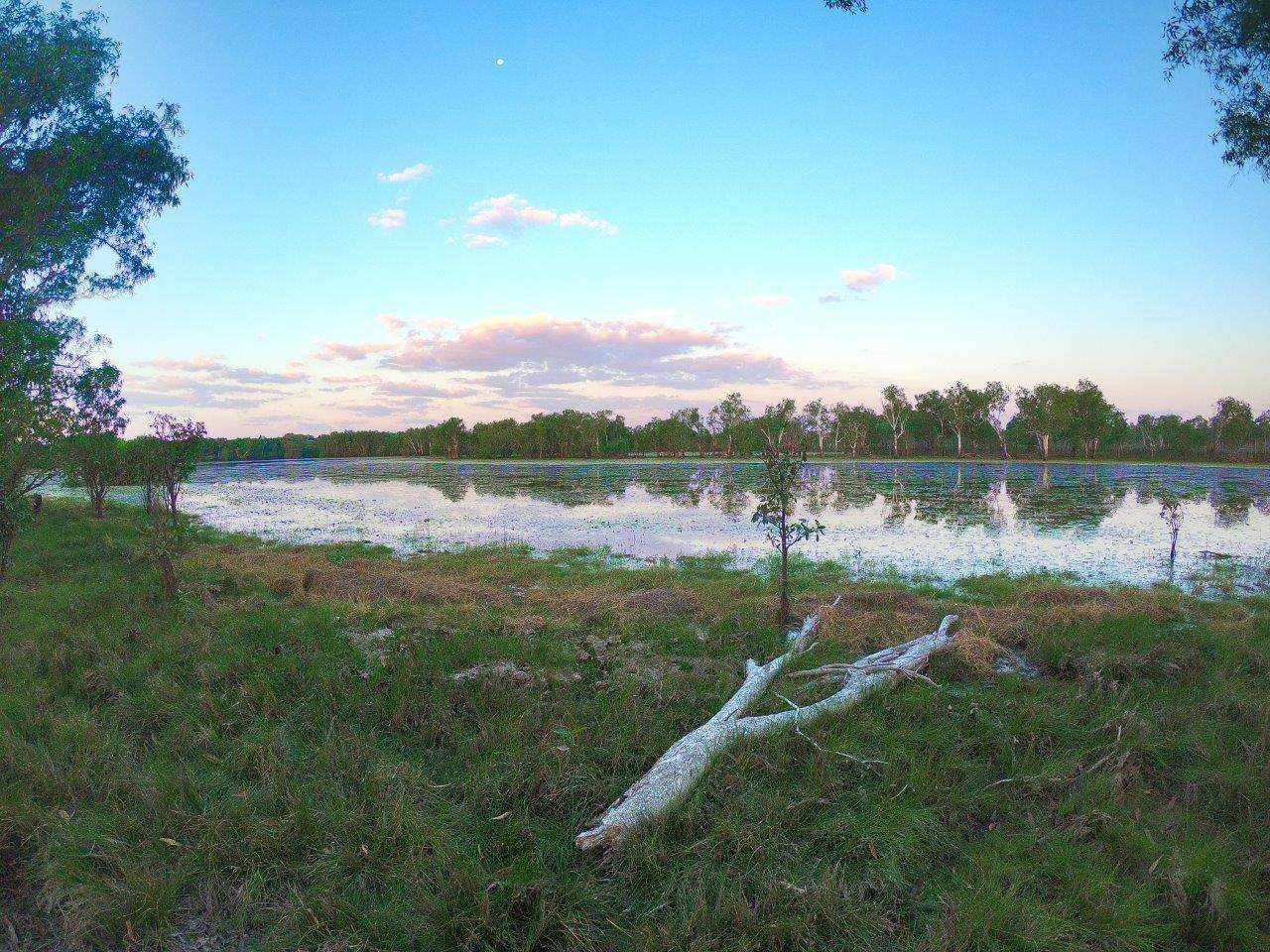 The Billabong is truly magic.

Steer clear of the billabong though, there are some big salties that live there, and someone was killed metres from the shore in 2002 after entering the water.

Pick where you stay based around what you want to see though; we ended up double tracking a few times due to poor planning.

We wanted to see Ubirr at sunset, and found out high tide at Cahills crossing (which is when its best to visit) was at 9:45AM. We left our camp at about 8, arrived at Cahills at about 9, then drove out to the billabong on the way into Kakadu, then into Jabiru for fuel and water, back out to Ubirr and then back to camp.

A long day, which could have been prevented by knowing the tide times and picking a camp closer to Ubirr. Never mind!