Our cheap and simple hot shower when camping

There are lots of ways that you can have a camping shower when off the grid, and we’ve tried a heap of them. These days, a lot of people run hot water on demand units, which essentially take a supply of water, and a supply of gas, and spits out water at what ever temperature you want.

We have one, sitting at home that came with the camper trailer, and I’ve never bothered to use it.

They use a fair bit of gas, are heavy, and take up a lot of room. That said, if you have the room, and the storage ability for gas and weight, they are an awesome, convenient bit of kit.

For us, we’ve gone much, much simpler

EDIT: We’ve bought a Reconn R2 Hybrid Camper, and now use this primarily for showers, but still carry the below setup! This camper has a shower tent, small hot water storage unit and the shower attachment on the side of the trailer.

I bought a 12V shower from Snowys, made by Primus. It has a little pump that takes water up to a shower rose, and it gets power from a cigarette lighter plug. We have no issues with power consumption on the camper trailer or Dmax, which makes this a breeze (they don’t use a whole heap of power anyway).

The missing bit of the puzzle is water, and we purchased a 16 litre stainless steel bucket from eBay for about $30, fill it with water from a creek, river or the camper trailer tanks, and then throw it on the fire. 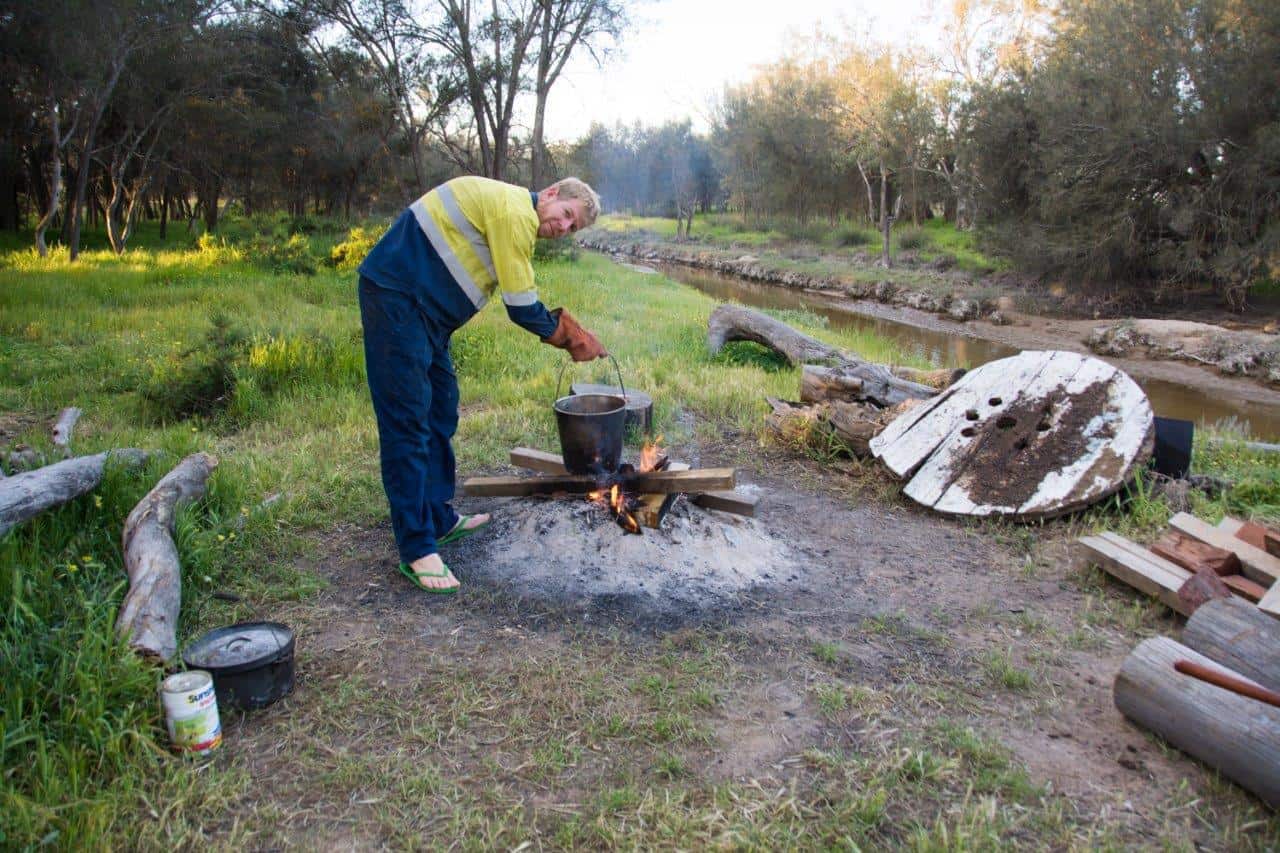 Warming water over a fire in a stainless bucket 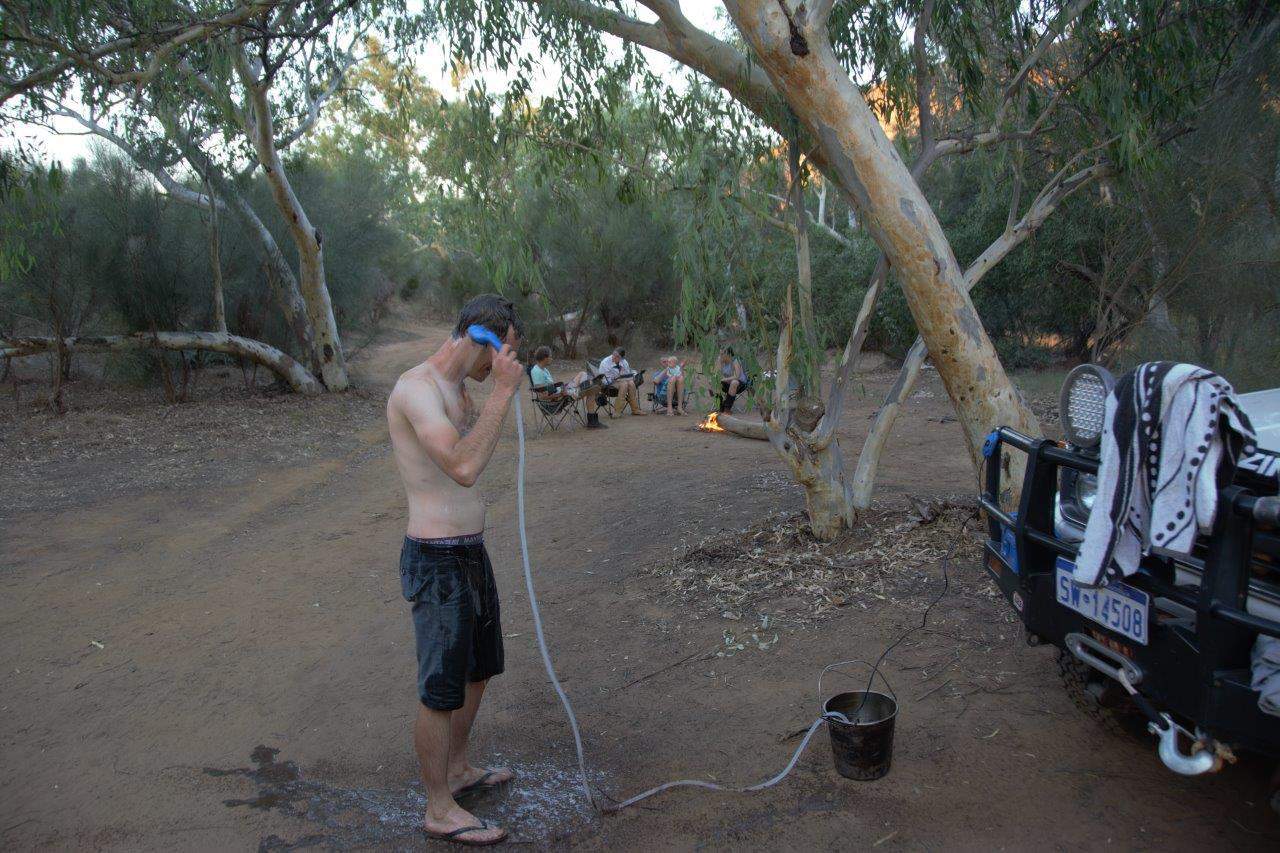 Chuck the 12V shower pump in and away you go

We also have a big plastic tub that we wash Oliver in, so add a bit of cold water to that, and then as much hot water as we want from the fire, drop the pump in, hang the rose off the canopy or a tree and away you go.

Most of the time we recycle the water; stand in the tub and 95 percent of the water goes back into it, so you can have a nice, long shower for as long as the water stays home. 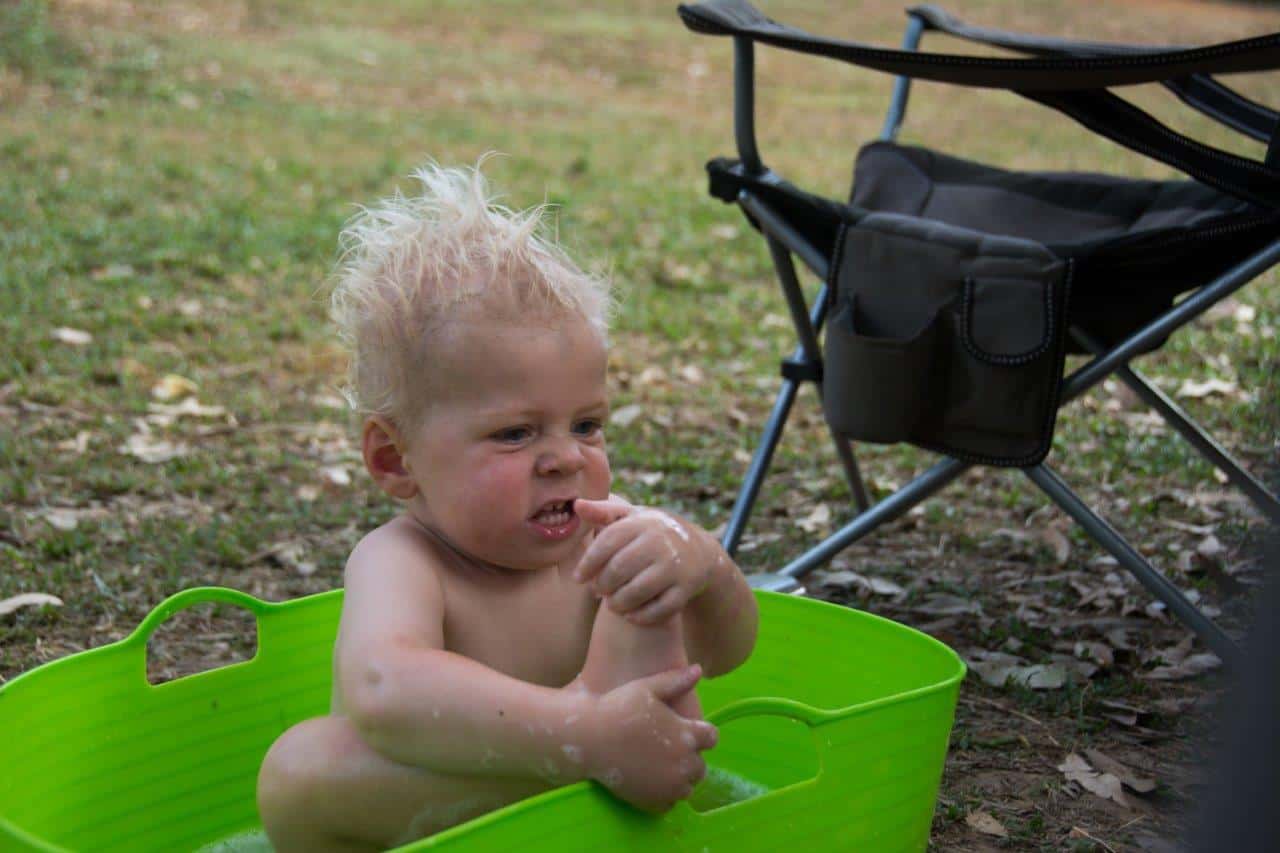 Oliver trying to eat his toes in the bath

For us, this is great; its simple, it has limited moving parts, it costs us nothing to run, its easy to use and the stainless bucket has a million other uses.

If fires are not permitted, generally its warm enough to have a Luke-warm shower during the middle of the day. We also have the solar shower bags, which work surprisingly well in temperatures above 25 degrees. I still doubt their durability though, and I reckon if you hung them like they suggest they’d break very quickly! 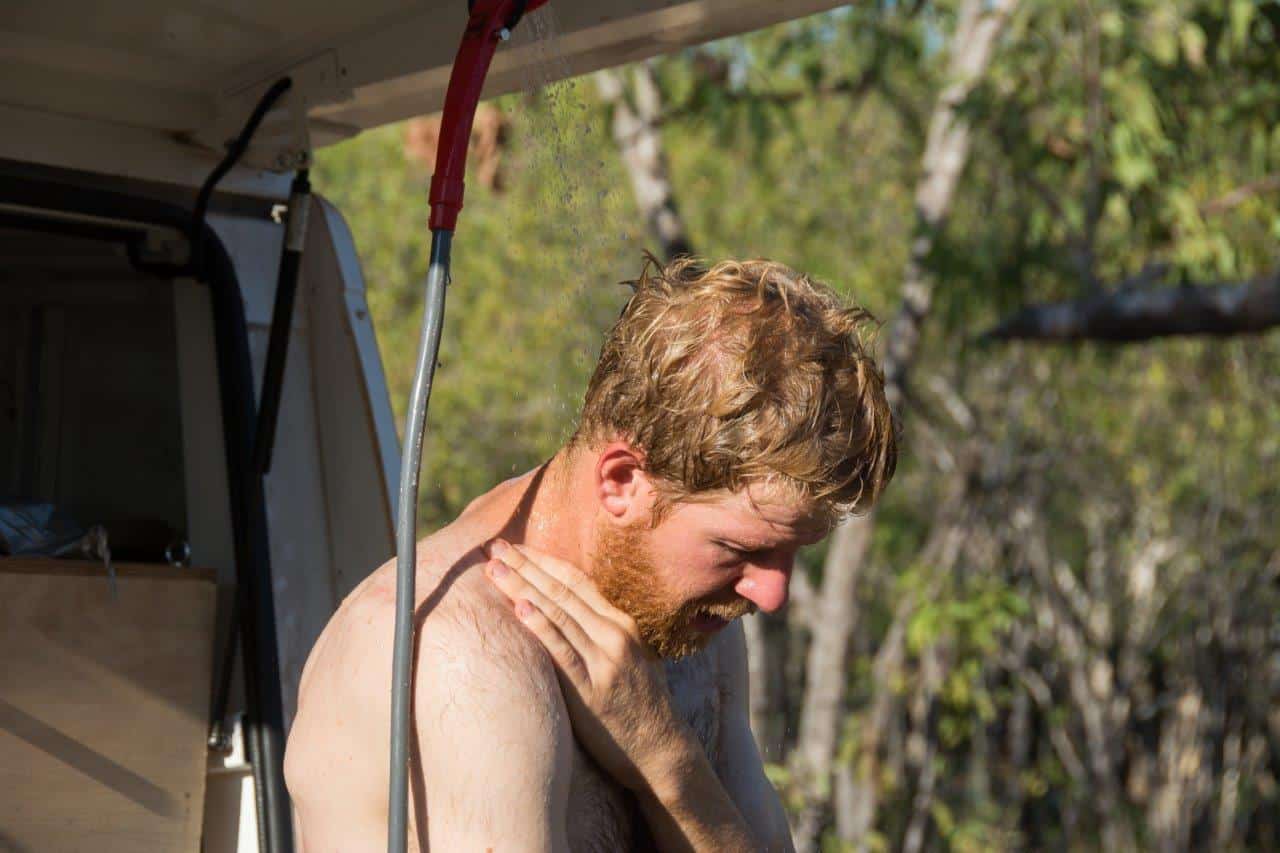 We have 50L of water on tap in the Dmax, and 130 odd litres in the camper trailer. It lasts a long time and we will often use it for showers, unless we are trying to conserve water and then it comes from creeks or rivers. 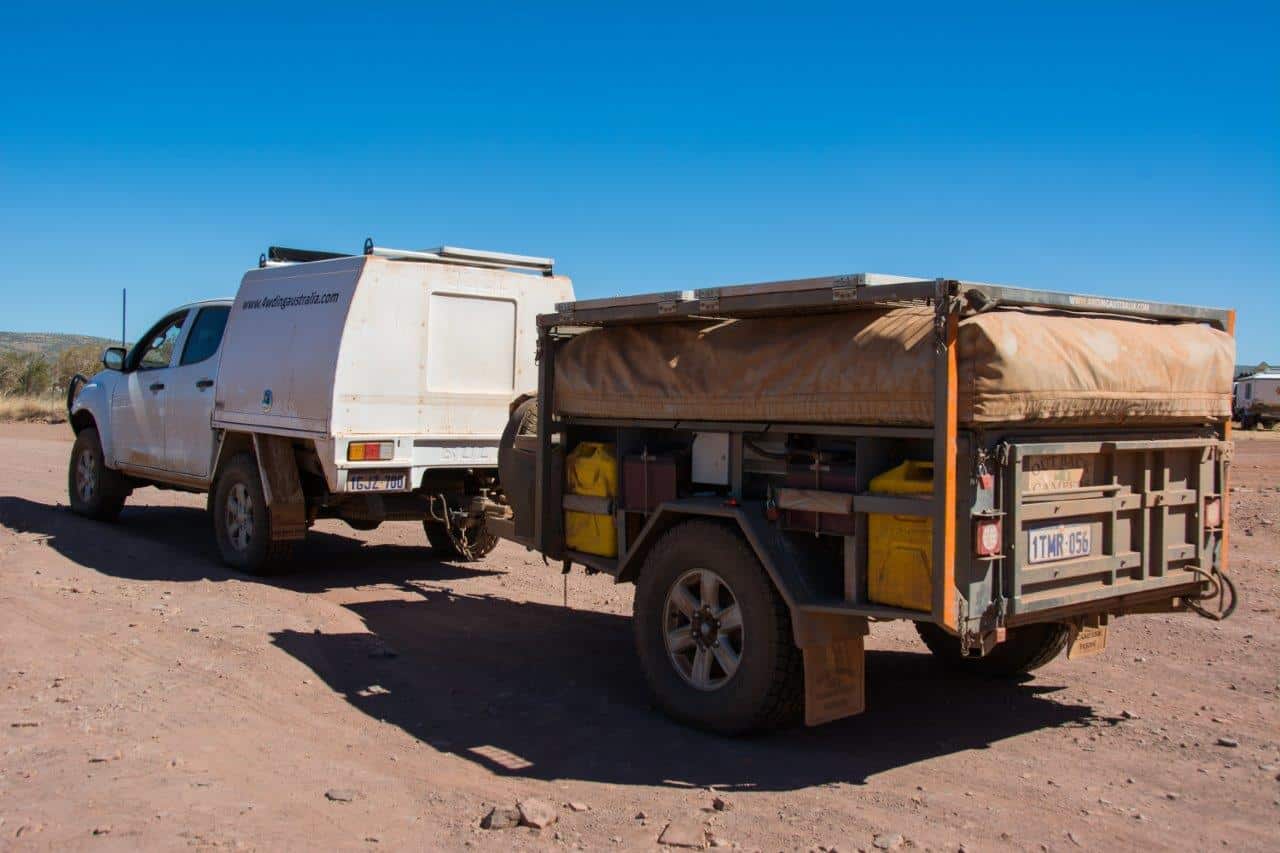 We carry around 180L of water at all times

If you are keen, you can actually make up your own DIY hot water system using some basic (and cheap) components, a fire and a copper coil. If you want to know more, check out DIY hot water. 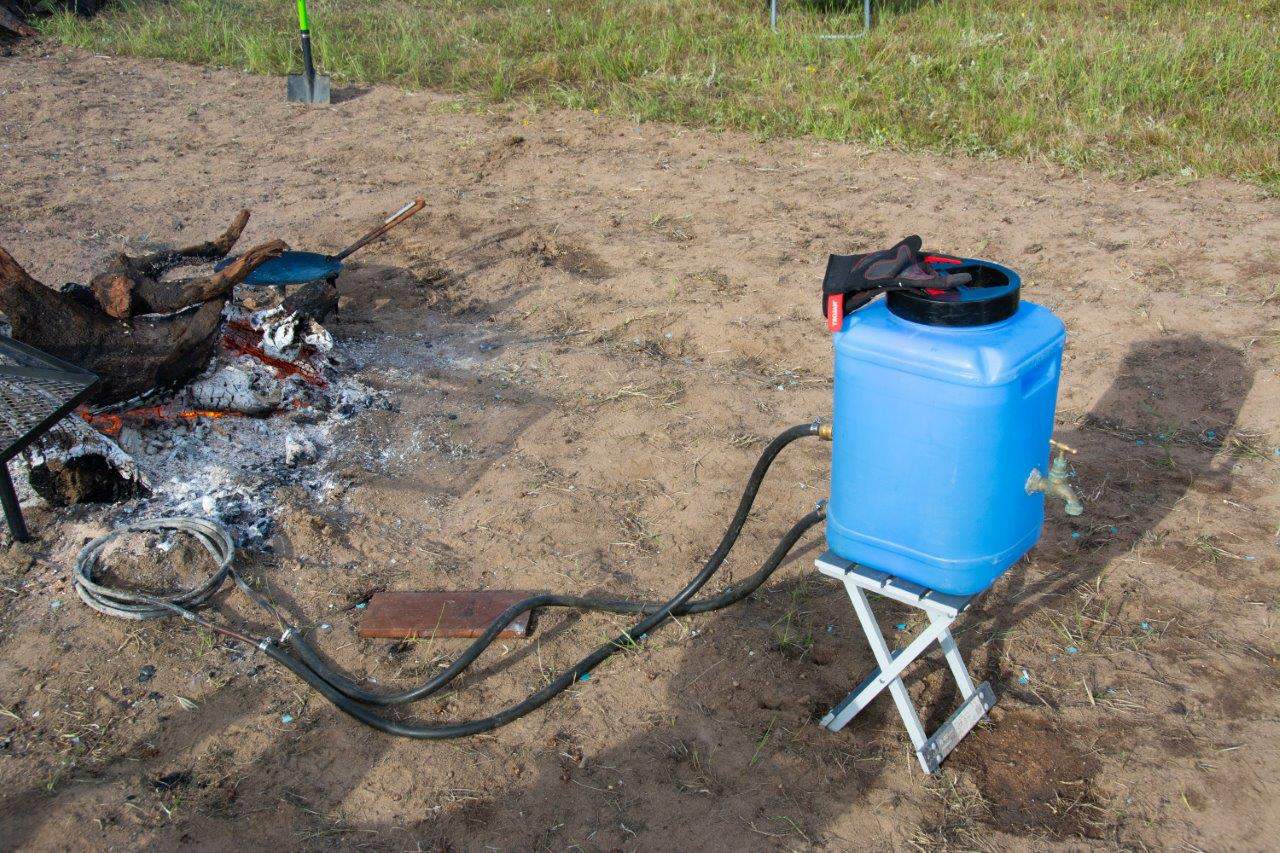 A simple DIY Hot water system in a fire

Showers in the bush

There really is nothing better than a shower in the bush, away from everyone else. Our simple shower setup makes camping off grid much more comfortable, and has become a necessity, like the portable toilet we carry. You don’t need them, but they make life a lot more enjoyable, especially with young kids!