Having a camping shower takes comfort to a totally new level. I’ll never forget the first time we boiled a big pot of water over the fire and used a cheap 12V shower pump to have a shower after a days motorbike riding in the freezing evening at Broome Hill.

Nothing beats a shower in the bush, even if its only 1/10th as good as one you’d have at home!

Since then, we’ve tried a number of shower arrangements. Every style has their own pro’s and con’s, but one day when walking through a camping store I spotted a couple of the black shower bags for about $10 each.

Given the price I thought lets give these a crack, so we grabbed two to try out. 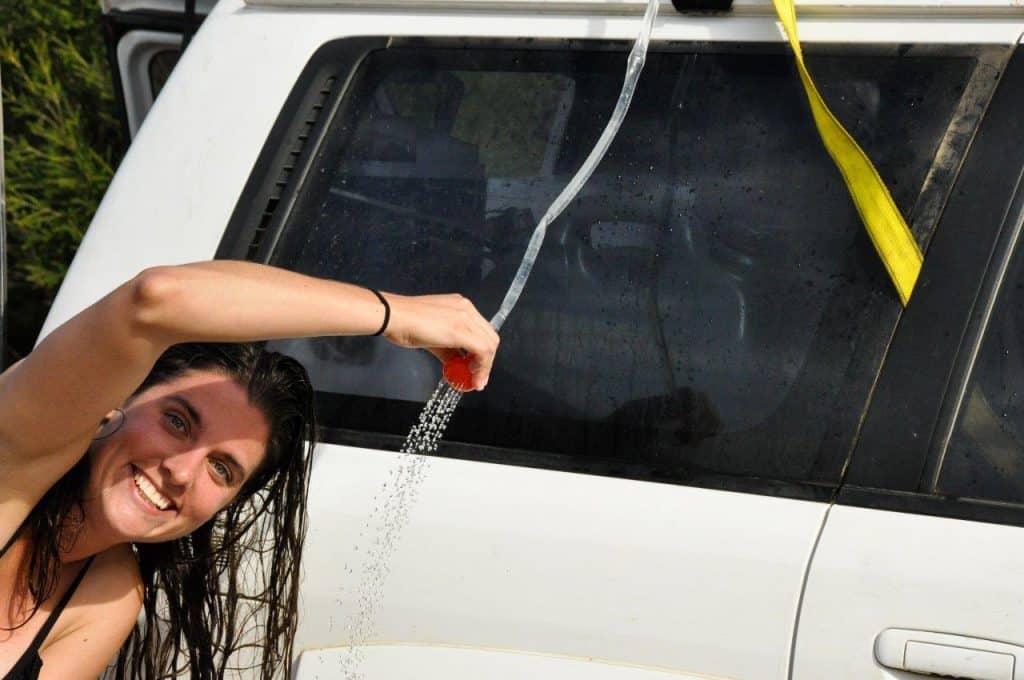 Having a shower when camping is amazing!

How do they work?

Solar shower bags are effectively heavy duty plastic bags that can carry water. They have a black surface, which you leave upwards. The black surface absorbs maximum heat from the sun, and over the course of the day the water warms up. The bags have a tap outlet, and usually come with a shower outlet too.

How much water can they carry?

Most shower bags take about 20L The ones I got take 19L. Interestingly, I didn’t feel the bags would hold 19 litres of water without breaking. It appears they do, but they still don’t seem so sturdy!

What can you mount them on?

The biggest problem I found with the solar shower bags was that in order to have the shower rose anywhere near ones head, the bags would have to be mounted over 2.3 metres in the air. This poses quite the challenge, as finding something that tall isn’t easy in the bush, and being able to mount it there is even harder!

We overcome the problem by hanging it off the roof of the 4WD. The only problem then, was operating the on/off valve – someone had to sit on the roof racks to do it. You have to be careful with how you hang them too; the handles are often not very strong!

There is no way you can hang these from the shower/toilet tents on the market; they are far too heavy to do so. 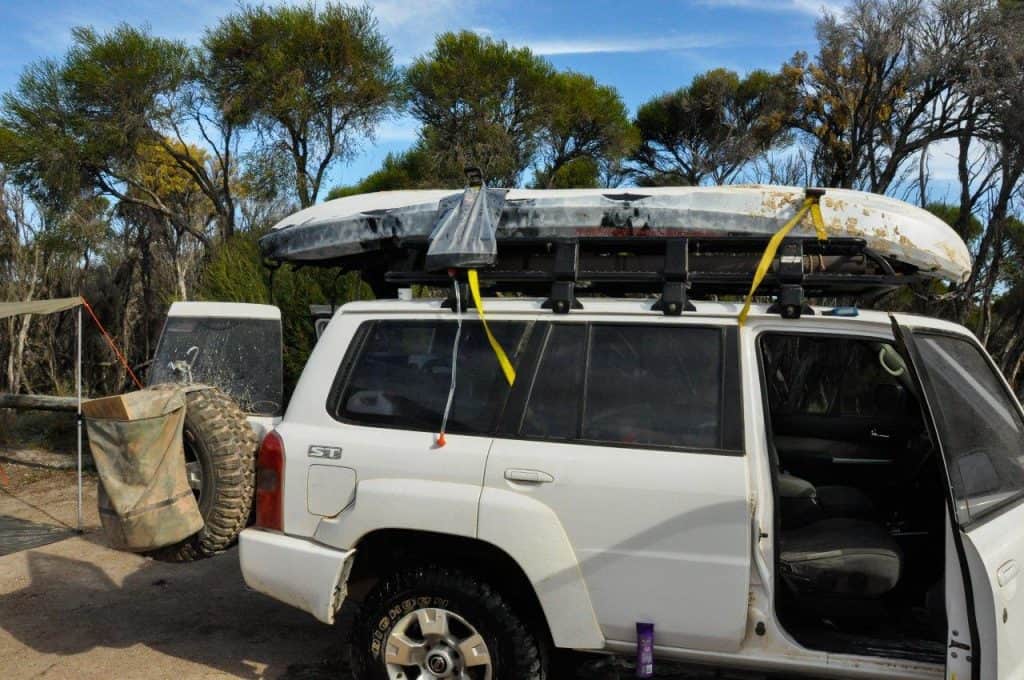 Our solar shower bag hung from a 4WD

We’ve used the solar bags a few times, and yes, they do work, but not amazingly. In order for the water to get warm enough for a shower, you need at least a 20 degree day with lots of sunshine. Obviously the hotter the ambient temperature the warmer they will get. Anything around 30 degrees warms them up really well.

The other thing that is a bit of a hassle is the way they are fed. Your normal shower uses pressurised water, and these only rely on gravity. The water pressure seems reasonable to start off, but as you use the water up, the pressure gets worse and worse.

Would I recommend them?

If you are in a warm climate, I reckon these are a cheap way of having a decent shower. You need to leave them out all day, and maybe have an earlier shower than usual, but it appears that they actually do work! For someone regularly needing showers outdoors, they are probably not the most suitable option, but they are cheap, simple and don’t cost anything to use!

If you have access to a fire regularly, I reckon a 12V shower pump and stainless steel bucket and some water is the better way to go.

Probably the next cheapest option is to boil water, tip it into a decent bucket with cool water (until you get the right temperature) and then use a 12V shower to pump it. These suck the water from a container and pump it out a shower rose.

The shower runs off your cigarette lighter plug, and will give you a brilliant shower. We found the best way to have a good shower was to get wet, turn it off, soap up and turn it back on. 10 litres of water is plenty for a good shower.

If you want to go one step further, stand in a big pot, and most of the water is collected and can be recycled (only recommended if you aren’t filthy!). 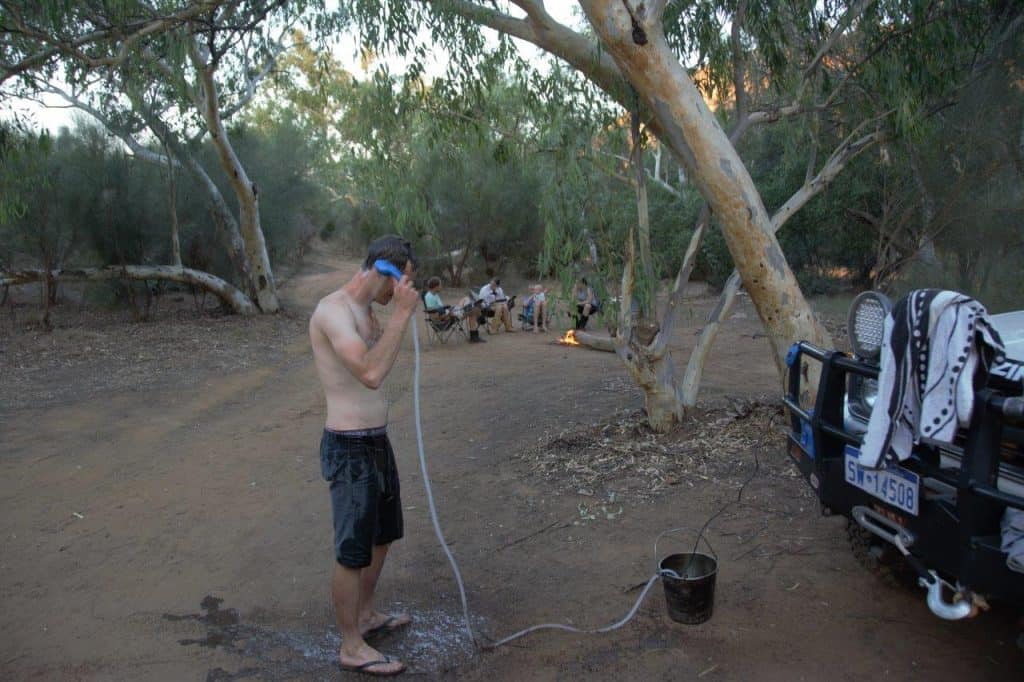 Another simple, but very easy way to shower in the bush

Coleman and Aquacube both have products to produce hot water on demand. This means that all you have to do is plumb them up, and you can have your shower. These products are more expensive, but work well and are very convenient. The only issue though, is they take up a lot of space. There are a number of other manufacturers that make similar products too, so shop around!

If you want a more permanent arrangement, take a look at the under bonnet hot water systems for the engine bay of your 4WD. A number of manufacturers sell (or you can make one yourself) these that rely on the engines running to generate heat.

They use a heat exchange near the radiator to warm the water up, and pump it out to a shower rose. The better set ups allow you to suck from a tank on the vehicle, or from a location of your choosing (river/creek/dam/bucket of water).

If you are into DIY, you can buy a length of thicker PVC pipe and fittings, and make your own tank that you can pressurise. Paint it black, put a few PSI of air in and you will have an amazing shower. 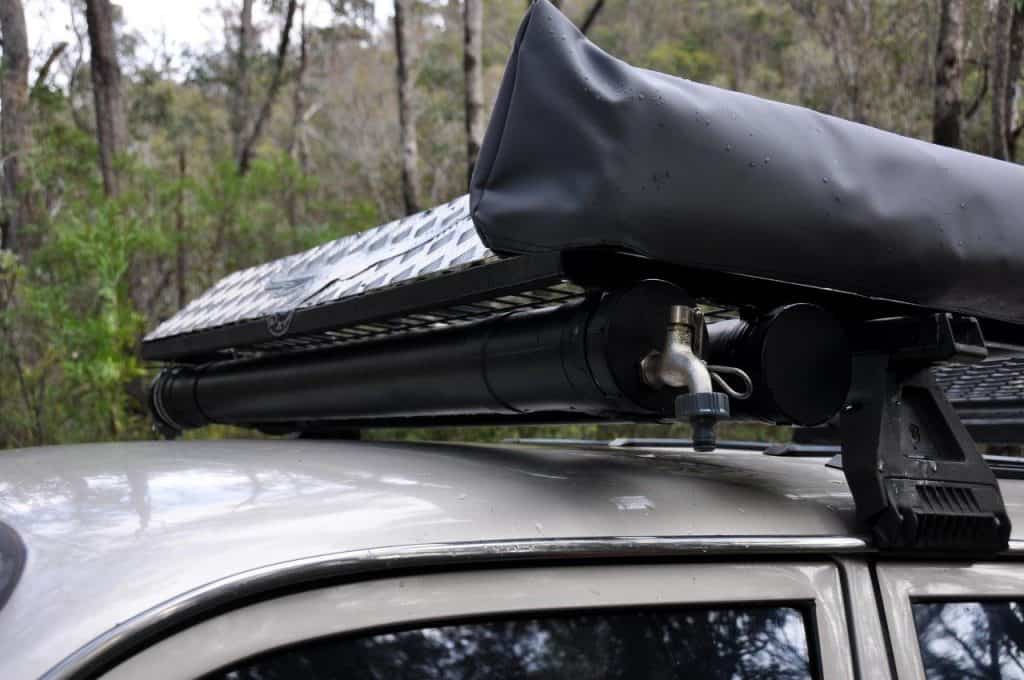 A roof rack mounted water tank for washing and showering

You can actually make your own DIY hot water system for camping quite easily, and cheaply. If you are keen to know more, have a read of this – DIY Hot water.

Most hybrids and camper trailers come with permanent hot water installed, which is a storage system. We have a 14L Truma unit in our Reconn R2, and pop the hatch off, turn a switch and have hot water about 40 minutes later (assuming the flame doesn’t blow out!).

You can get camping showers from all over the place. Snowys, Anaconda, BCF, Tent World and the list just goes on and on. Get something that suits your needs and budget, and I guarantee you’ll love a warm shower in the bush!

What camping shower do you use?

Not every solution is going to work for you; what do you use that works well?