If you are looking for another world class camping location right on the Ningaloo Reef, Mesa might be the place to go. Mesa is a spectacular camp site within the Cape Range National Park, and is well known for its little inlet and creek, beach access and stunning views. 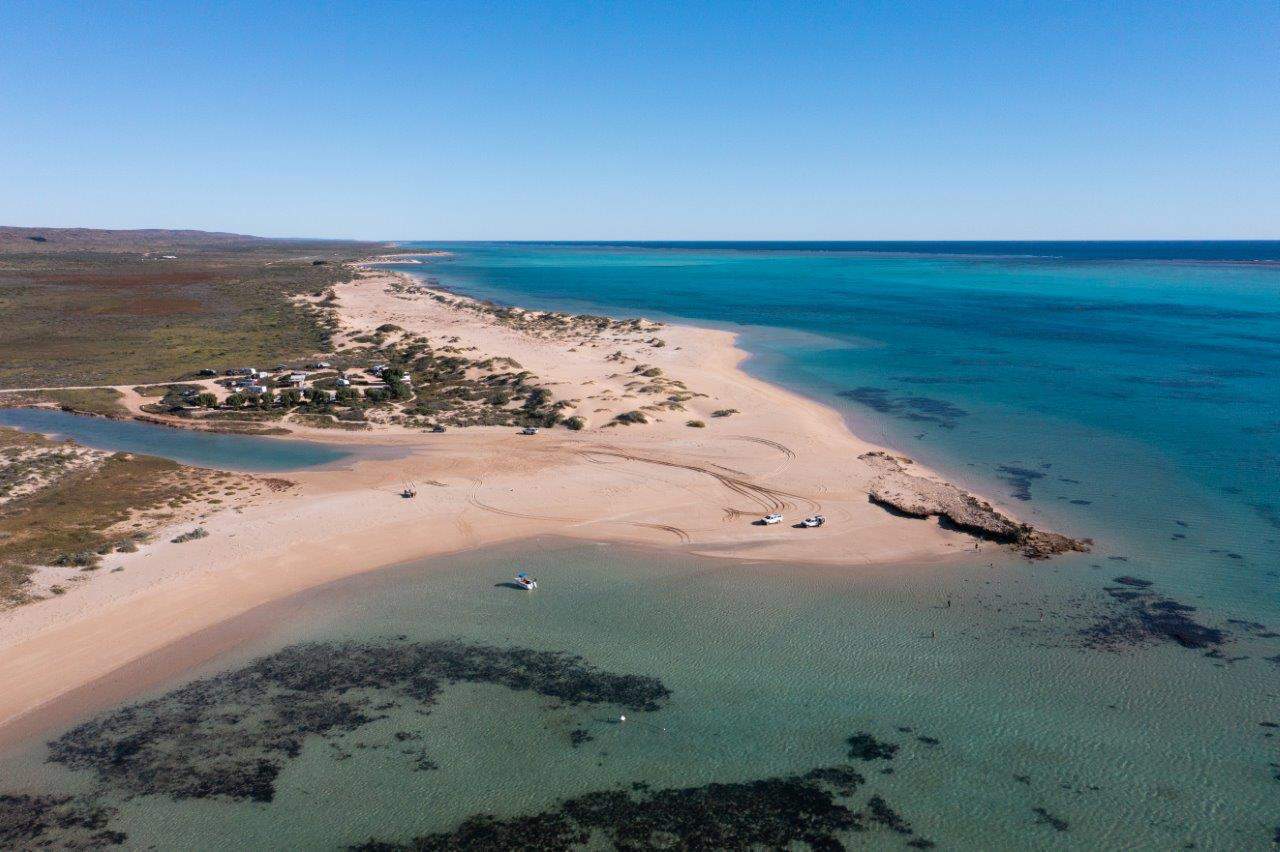 Mesa Camp Ground and beach, right on the Ningaloo Reef

We spent a night at Osprey Bay before spending 5 at Mesa, and really enjoyed the stay. We also took the time to drive through each and every other camp site in the National Park, to find the best camp sites in Exmouth, and Mesa rates up there with the best. 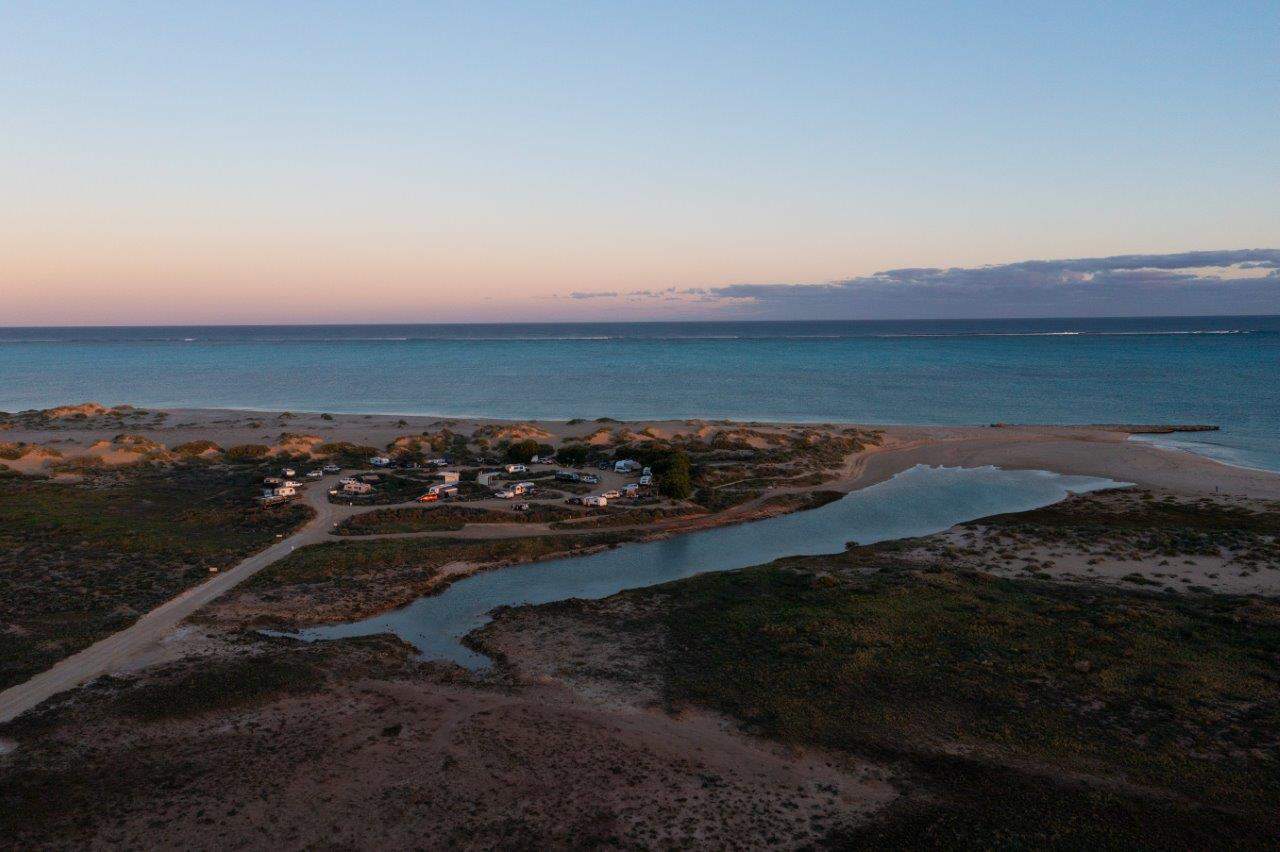 You’ll find Mesa roughly 40 minutes drive from the centre of Exmouth, along the western part of the coastline. It’s only about 500 metres away from Neds camp, another small DBCA camp site that is popular for those who like to camp near the coast. 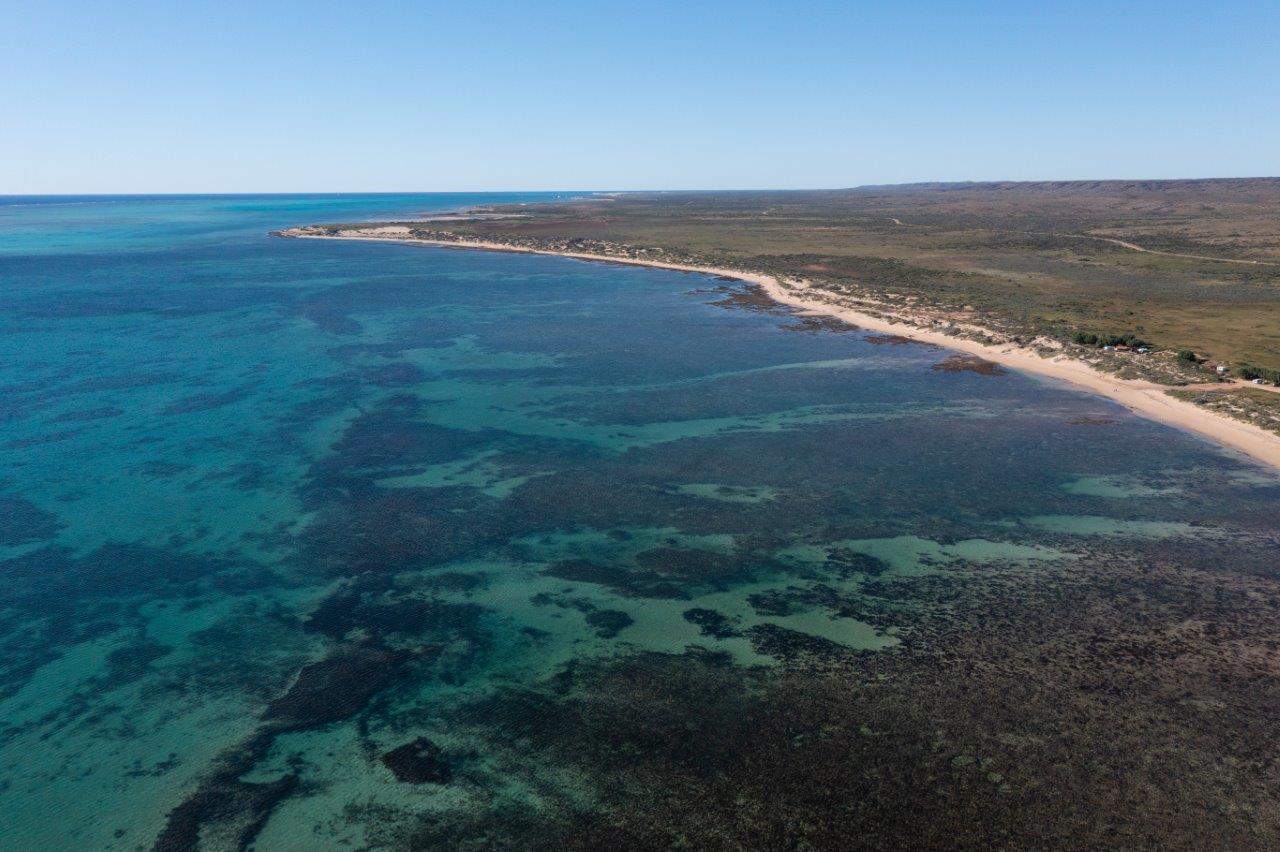 Camping at Mesa is $11 per adult per night, $7 for concessions and $3 for kids between 5 and 16. Younger kids are free, and booking must be done online.

I will say that getting a spot in the Cape Range National Park is hugely competitive, and you will have to get up at midnight 180 days before your intended arrival date to get a spot, and even then there’s a good chance you’ll miss out. For more information, you can read How to book a WA national park when its busy. 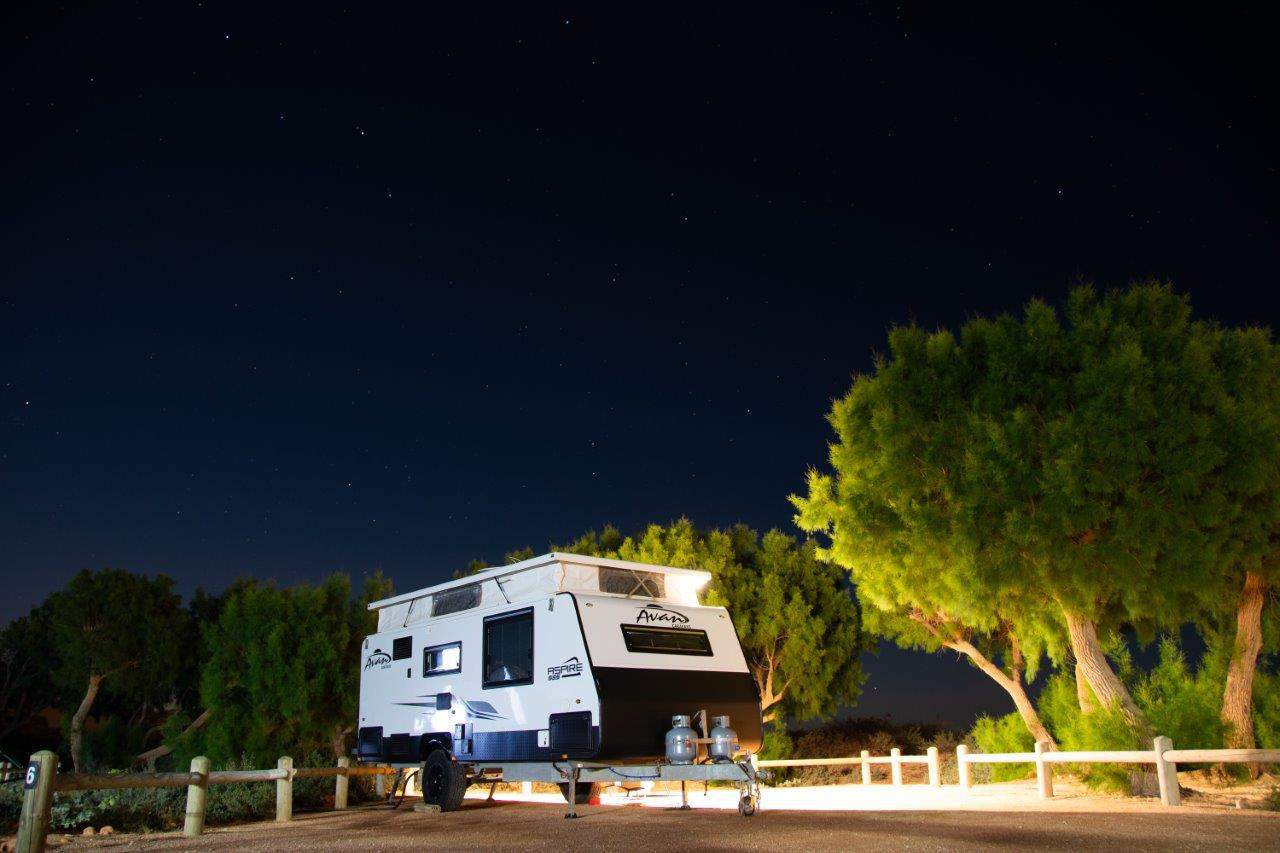 What vehicles does Mesa suit?

The camp sites at Mesa are suitable for all types of rigs, including big caravans and busses. We literally had a 15 metre plus bus pull in for one night, dwarfing everything around it. 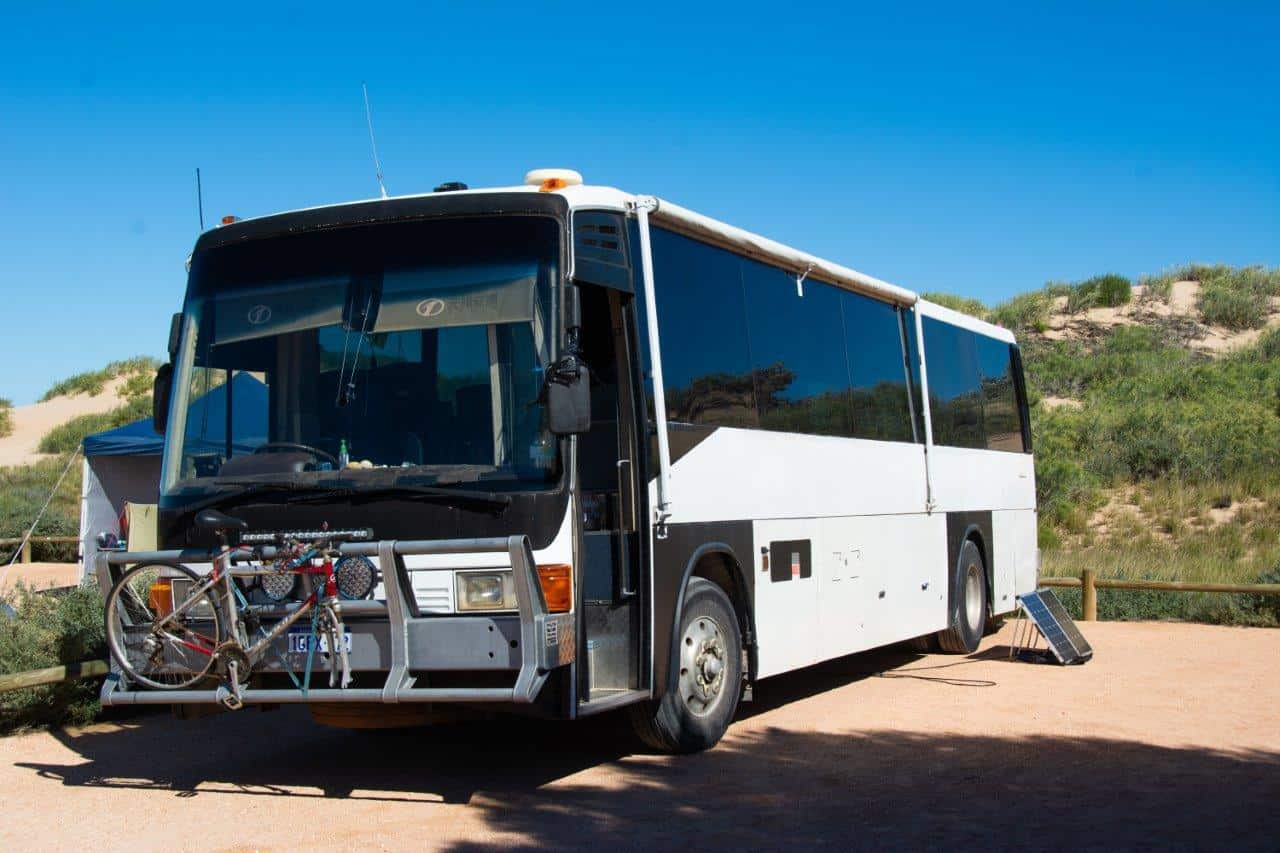 The sites are decent, with this big bus comfortably fitting 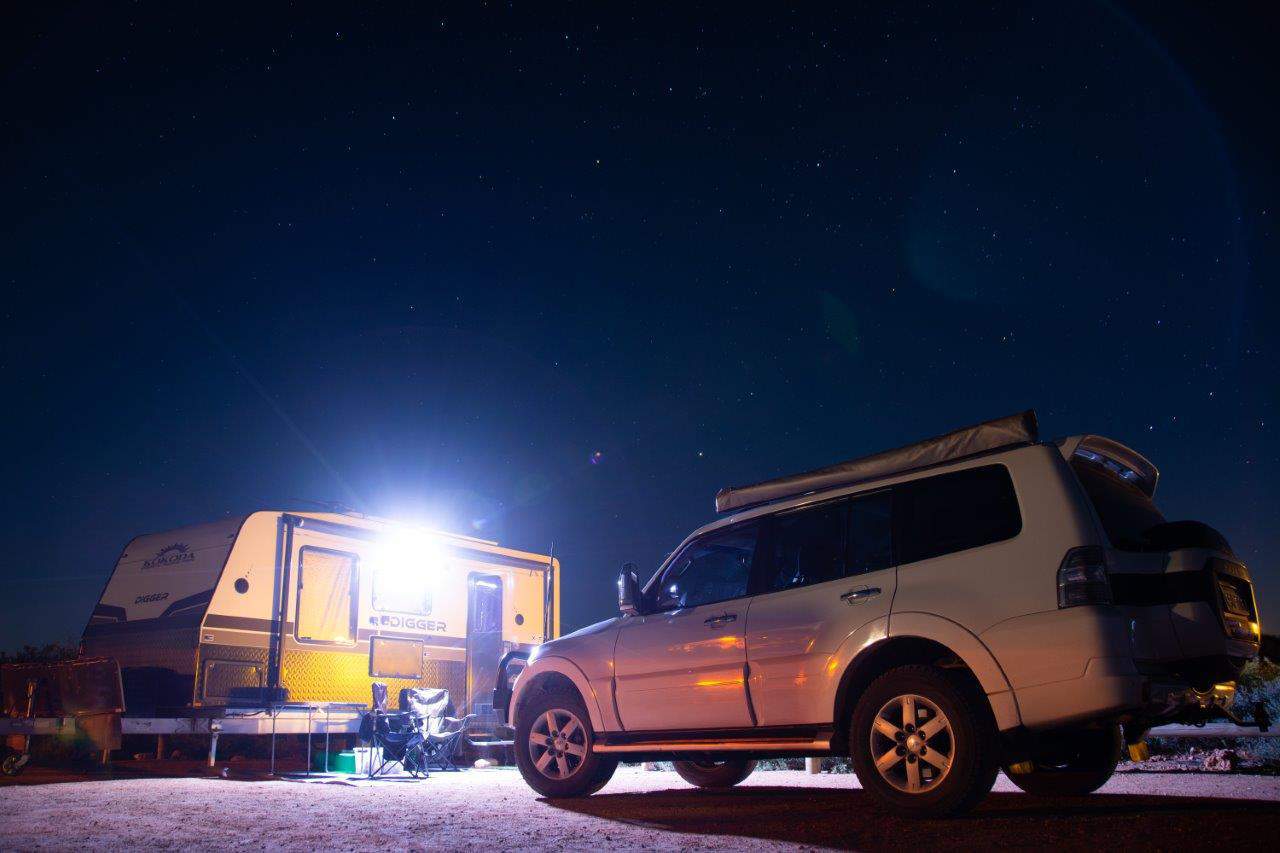 You’d have no issues with almost all camping setups

Can you drive on the beach?

Yes! Mesa has one of the only beach accessible locations by 4WD. Granted, you can’t drive very far, but you are allowed to drive past the lagoon and onto the beach. This makes life so much easier if you want to head down for the afternoon with dive gear, fishing gear and toys for the kids to play with. 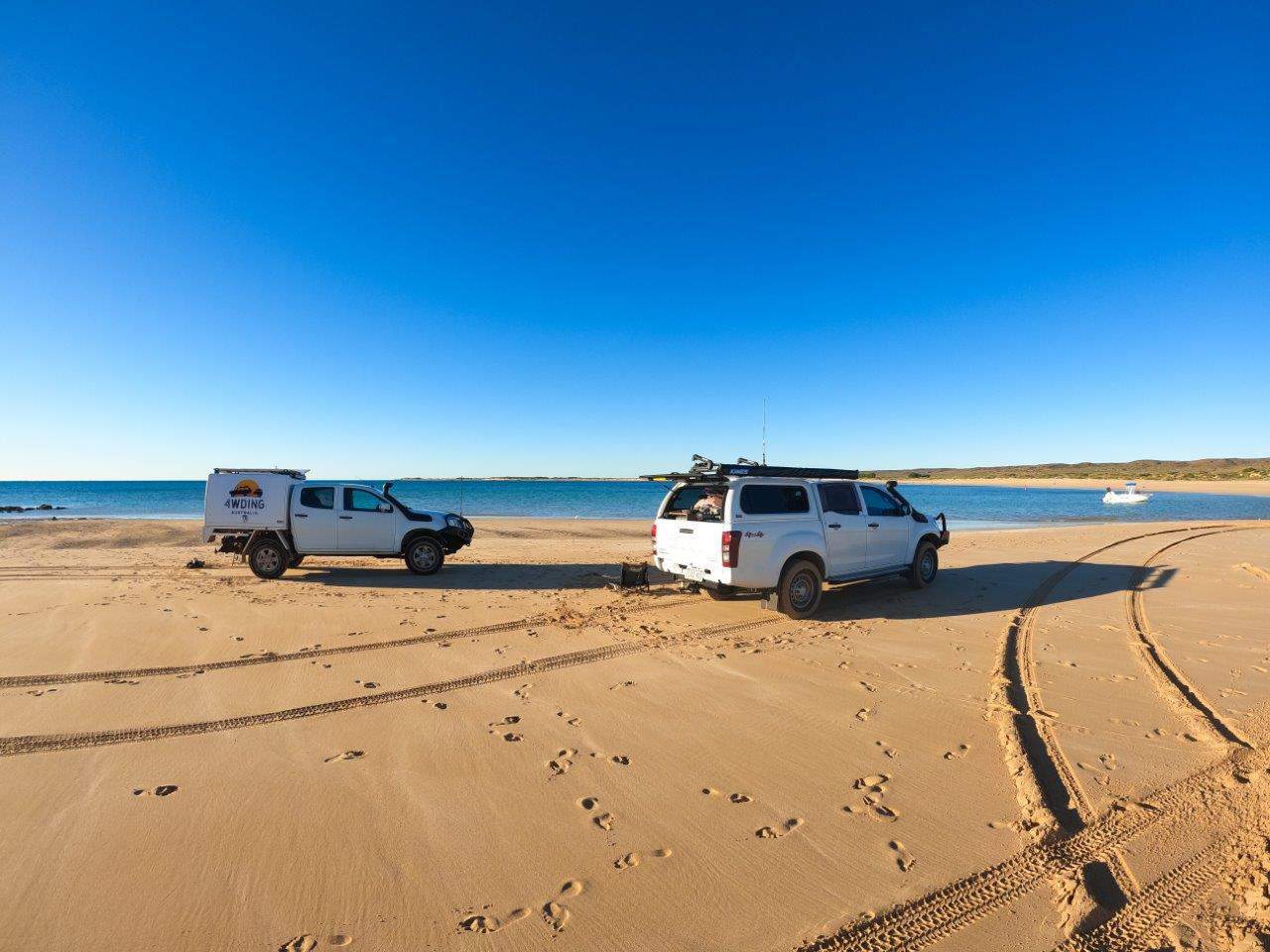 Mesa has the usual amenities that exist at most of the National Park sites. You’ve got 4 decent drop toilets, rubbish bins, a couple of tables and that’s about it. You can get non potable water in the national park too, but you need to be self sufficient to camp here. 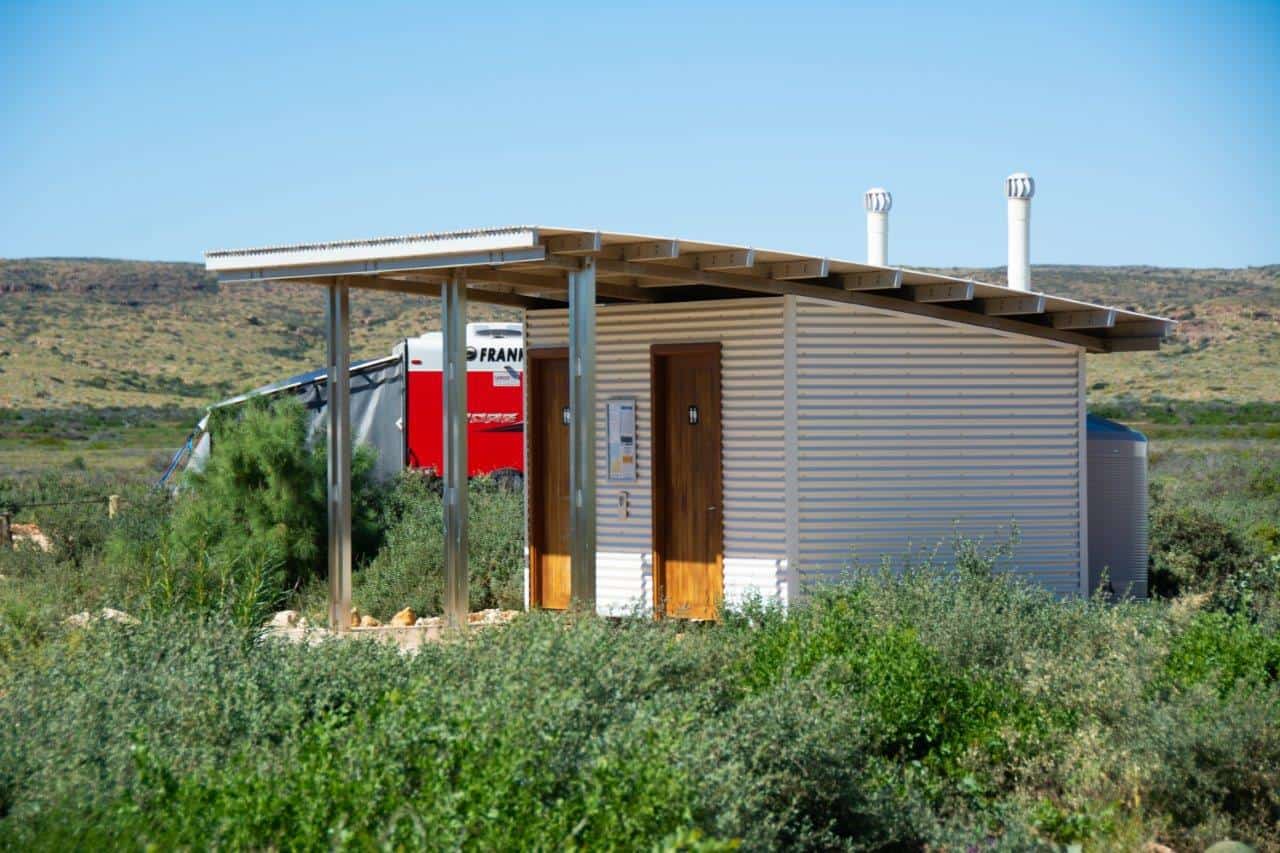 The toilets are pretty good 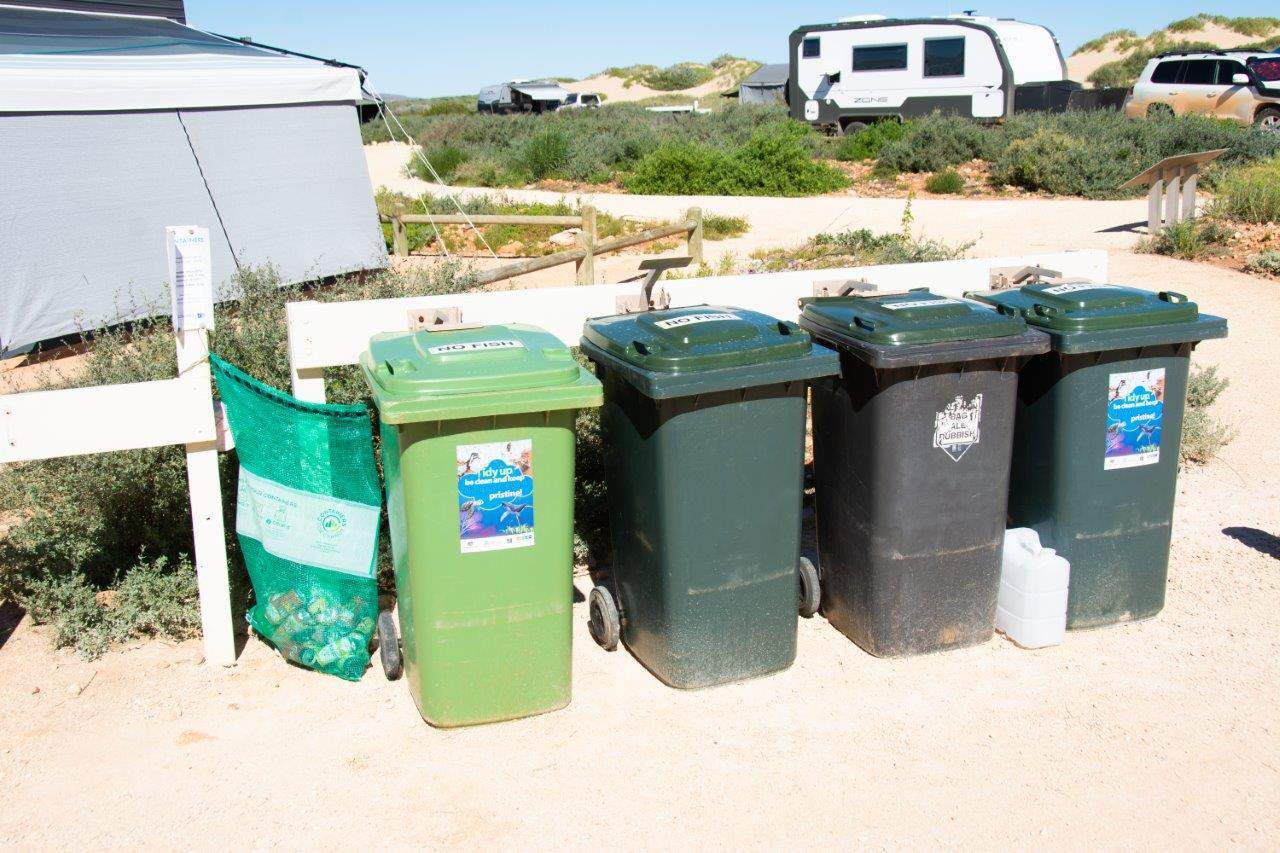 You can dispose of your rubbish here too

One of the major attractions at Mesa is a little lagoon that you see on your right hand side as you drive in. It’s usually got a fair bit of water in it, and at high tide it gets topped up. The lagoon is perfect for kids to splash around in, and is pretty spectacular when the sun is shining, or when it glasses off.

We chose Mesa to spend a decent chunk of time at because of the lagoon, and it paid off. The kids loved it, and we spent hours digging holes and splashing in the lagoon, and looking for little crabs! 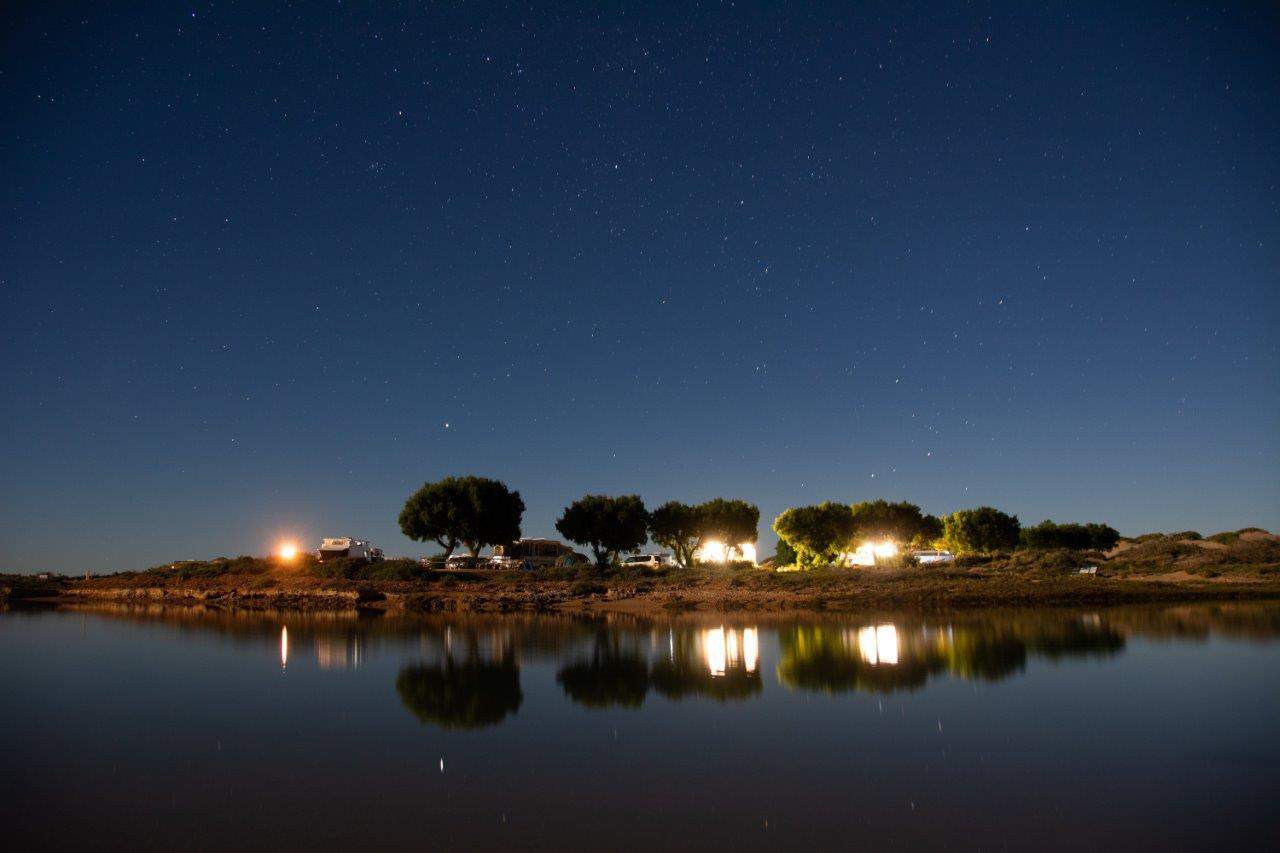 The little lagoon is pretty incredible 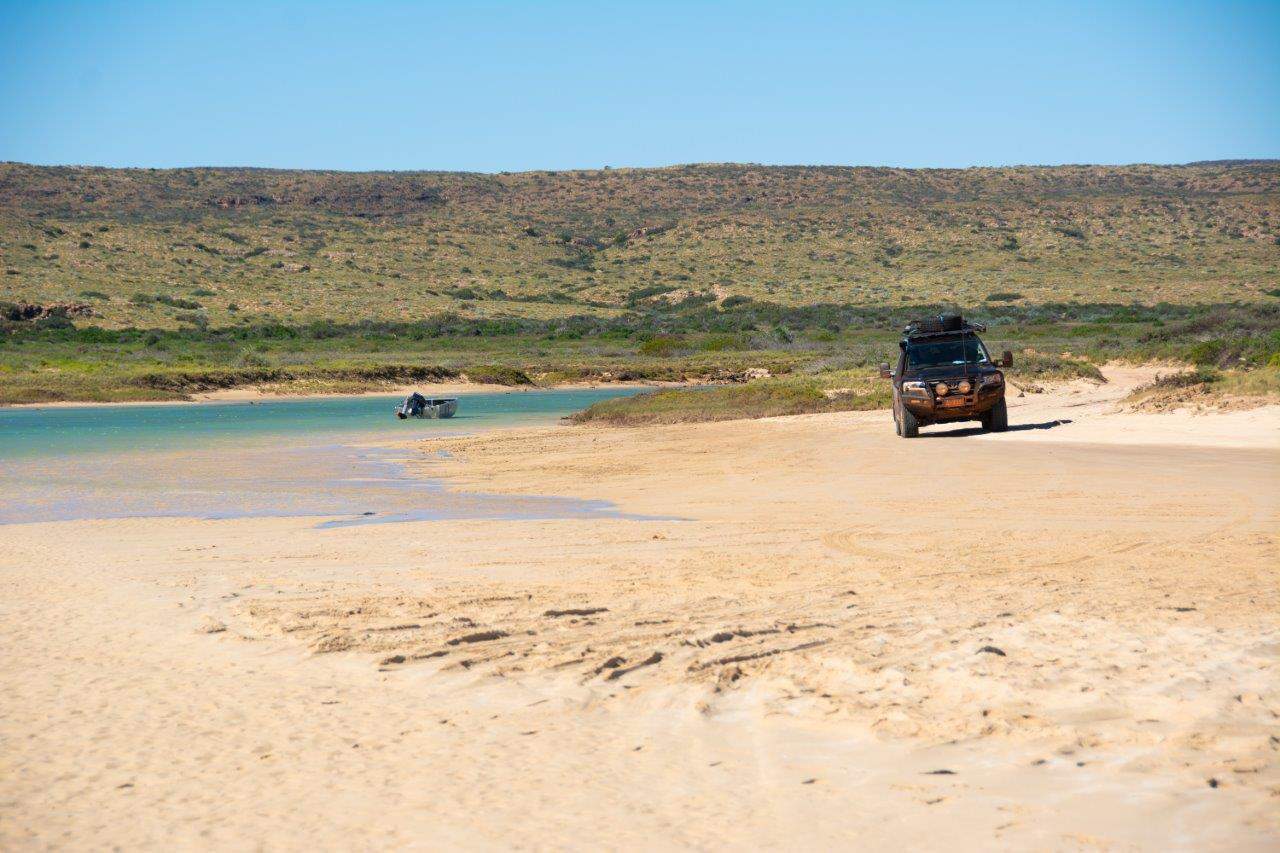 It’s the perfect addition to an already great camp 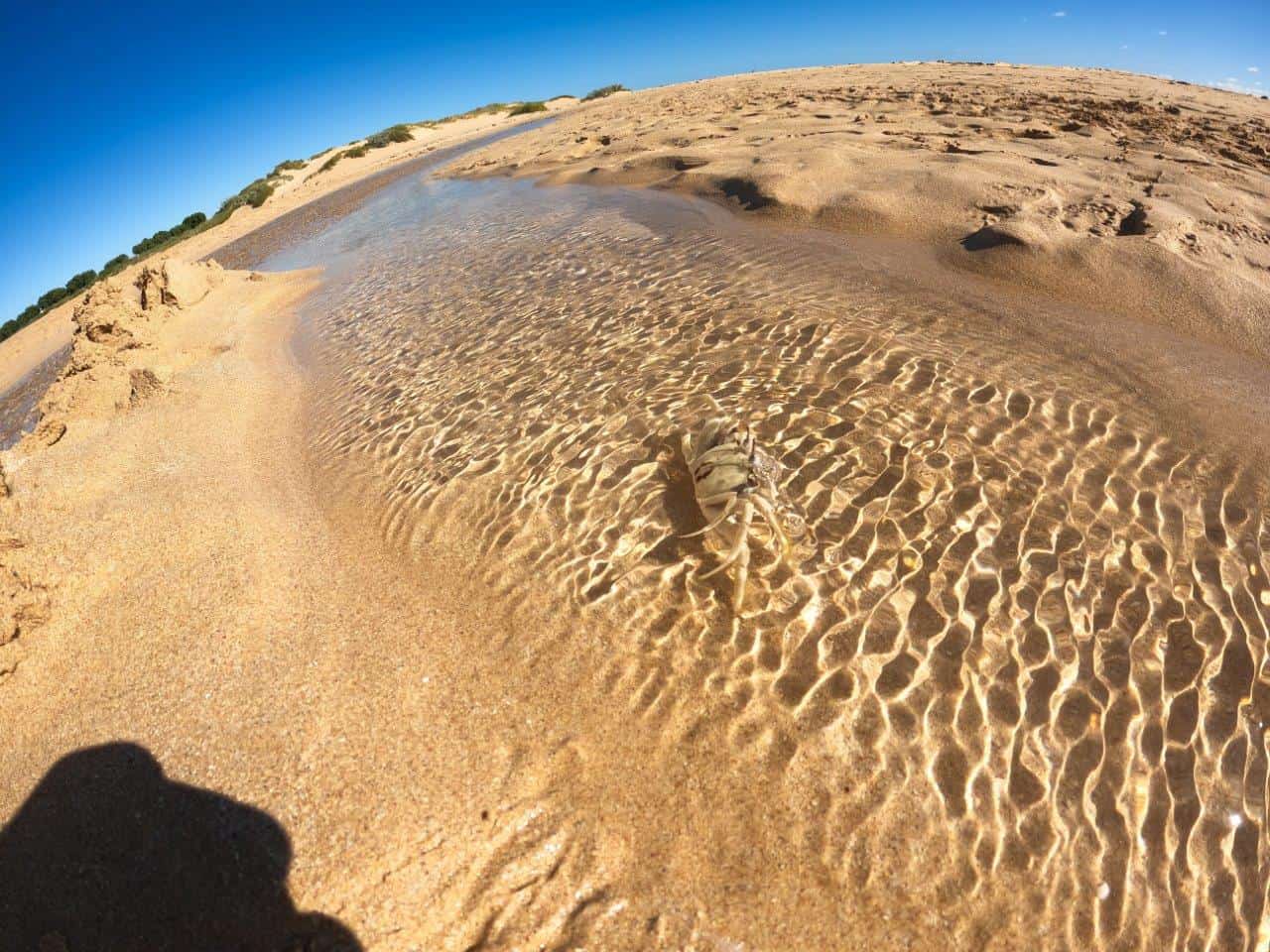 We spent lots of time at the lagoon with the kids

Be prepared for the wind

Cape Range National Park can be incredibly windy, despite what the forecast might say. We had a couple of days where it hit 30 – 50km/h winds, and there were a number of campers who literally packed up and left as their tents had collapsed in.

One Caravan had its awning ripped off, and it made for a fairly unpleasant night even for those in solid caravans. 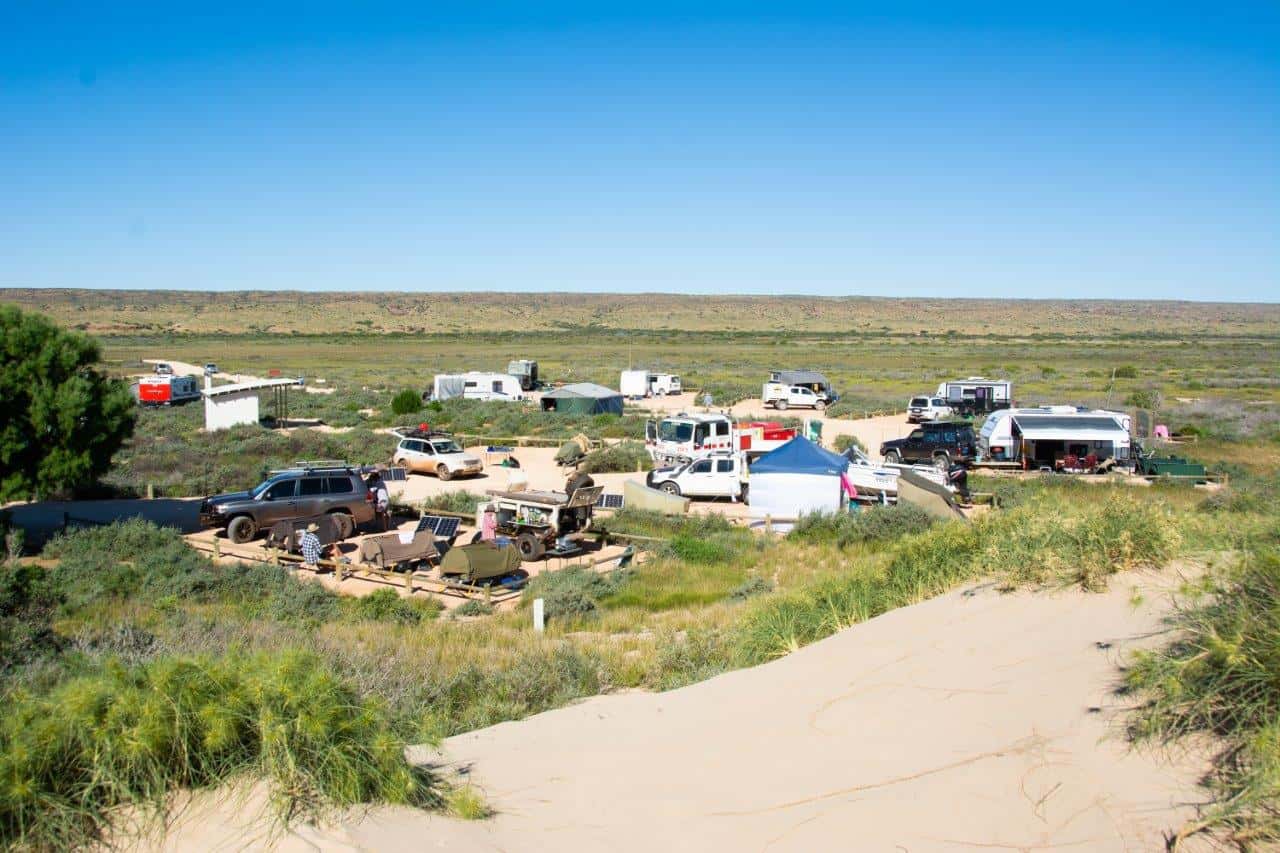 Looking back at the camp ground from the dune access

Take gear that will handle severe wind, and be prepared for a couple of bad days. That means being able to cook despite the wind cooling everything down at a huge rate, and having sleeping gear that isn’t going to fall apart in the middle of a windy day! 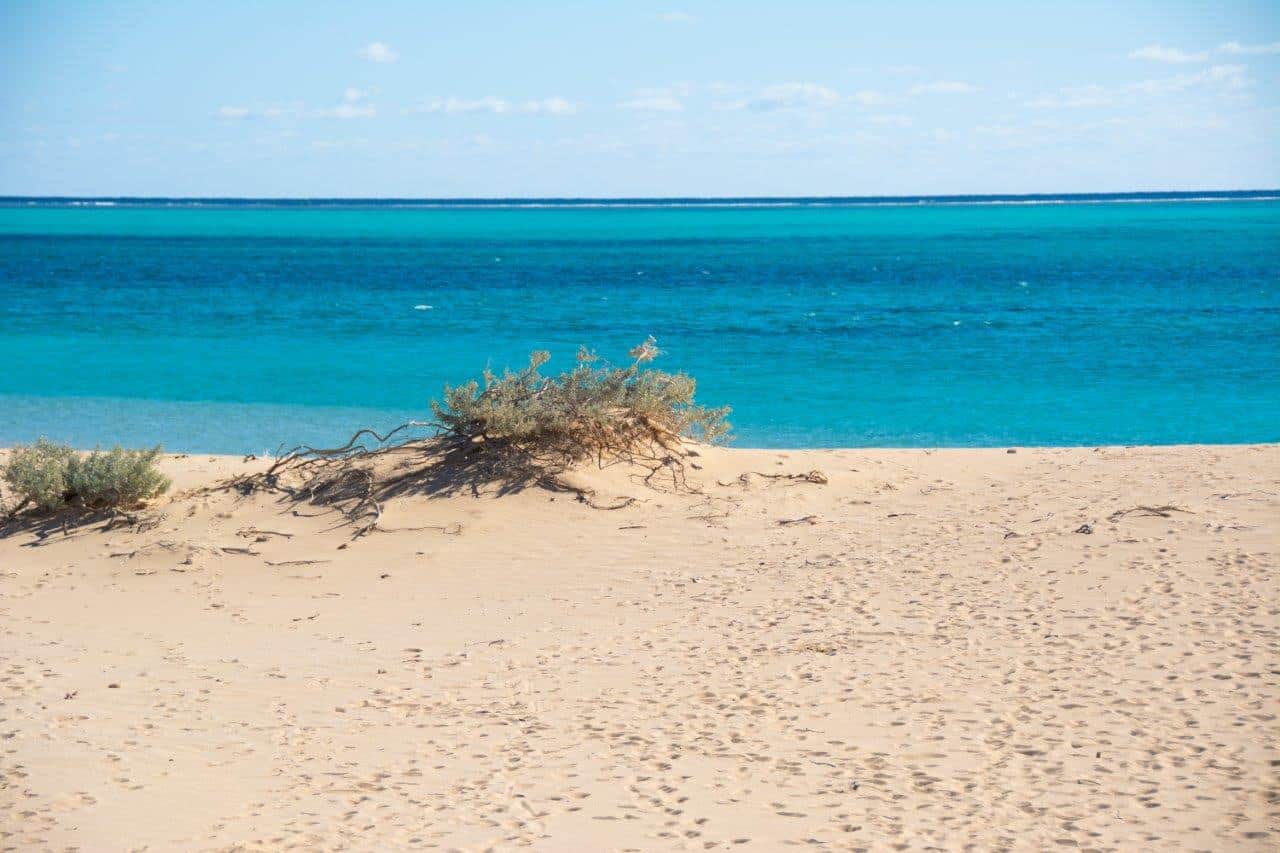 The wind can be pretty bad

Western Australia can be incredibly windy, even during the seasons where its supposed to be calm. It’s just a part of camping in WA, and something you have to deal with, and be prepared for. Don’t expect magic, glassy days for weeks on end, as it rarely happens!

Launching a boat at Mesa

Mesa is a popular location for beach launching boats, and we even saw some larger boats being dropped in (around the 6 metre length). You will need to let your tyres down, and be prepared for potentially getting your vehicle wet (or detaching the trailer) and the drive back out can be quite soft.

The most common place to launch the boats is just north of the rocks, although we did see a couple of people launch them on the southern section too. 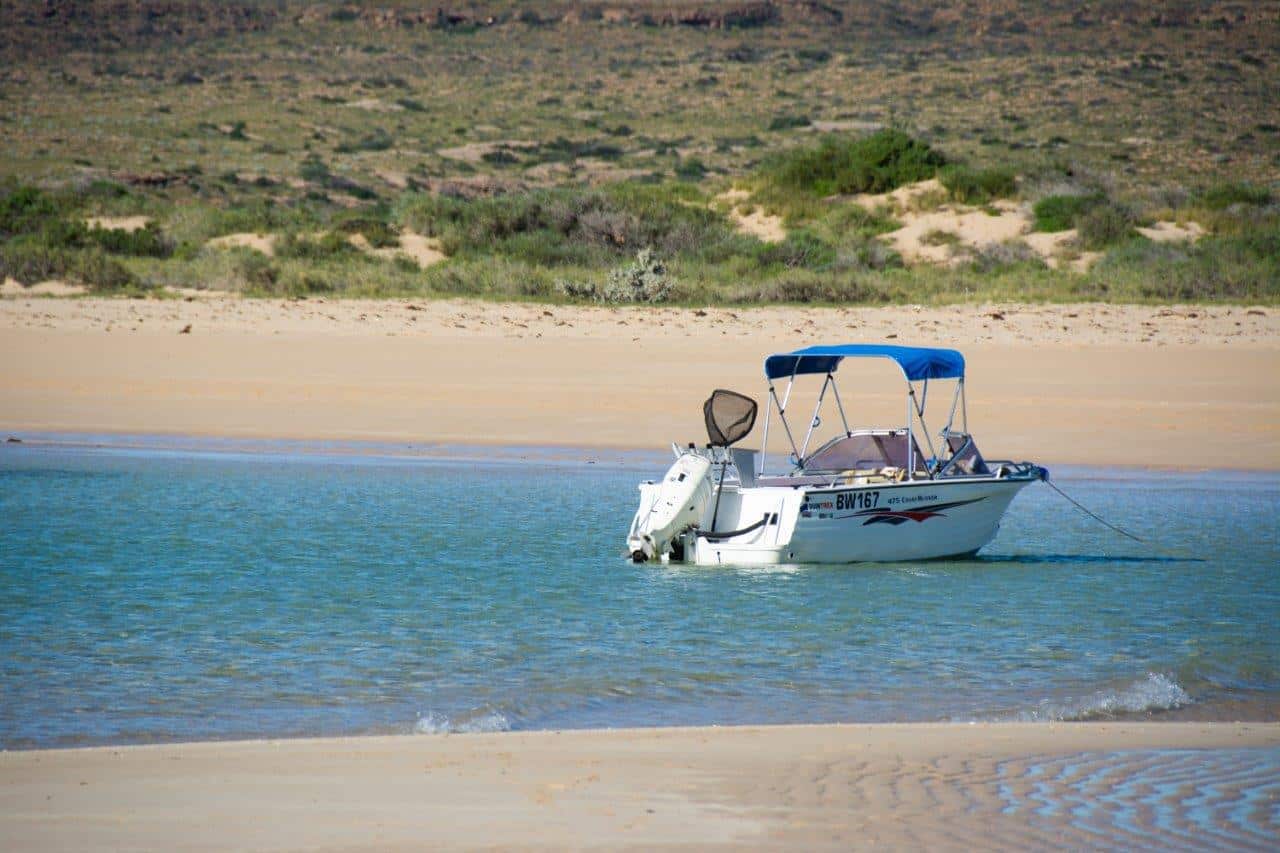 We spent a bit of time fishing at Mesa, and could see a huge number of others doing the same thing. You are allowed to shore fish, and I’m certain you’d get some decent fish from time to time. It does seem to be quite fished out though, and we had far better luck putting the wetsuits on and going for a dive.

Unfortunately you aren’t allowed to spearfish in the Ningaloo Marine Park unless you are several kilometres out, but you are allowed to take crayfish in the designated areas. 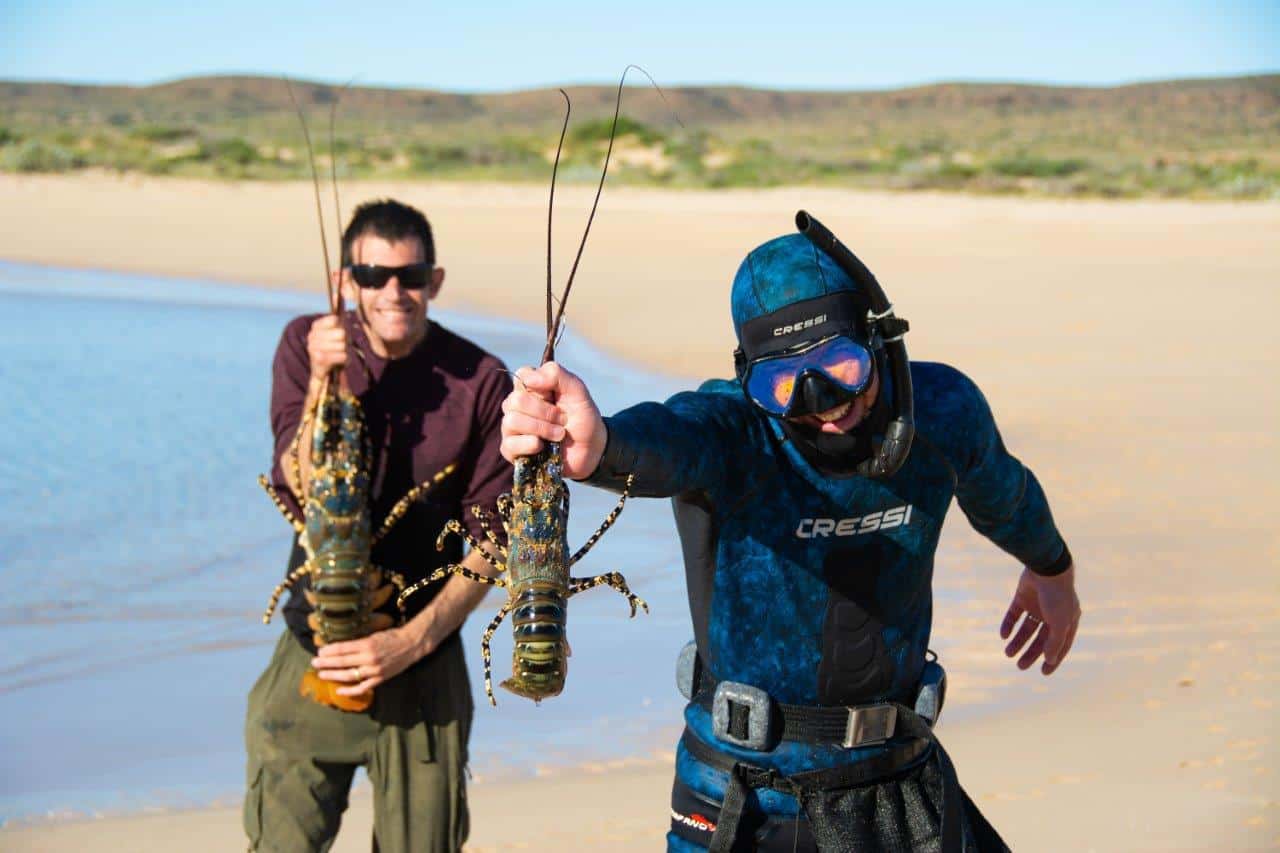 We landed a couple of nice crayfish at Mesa 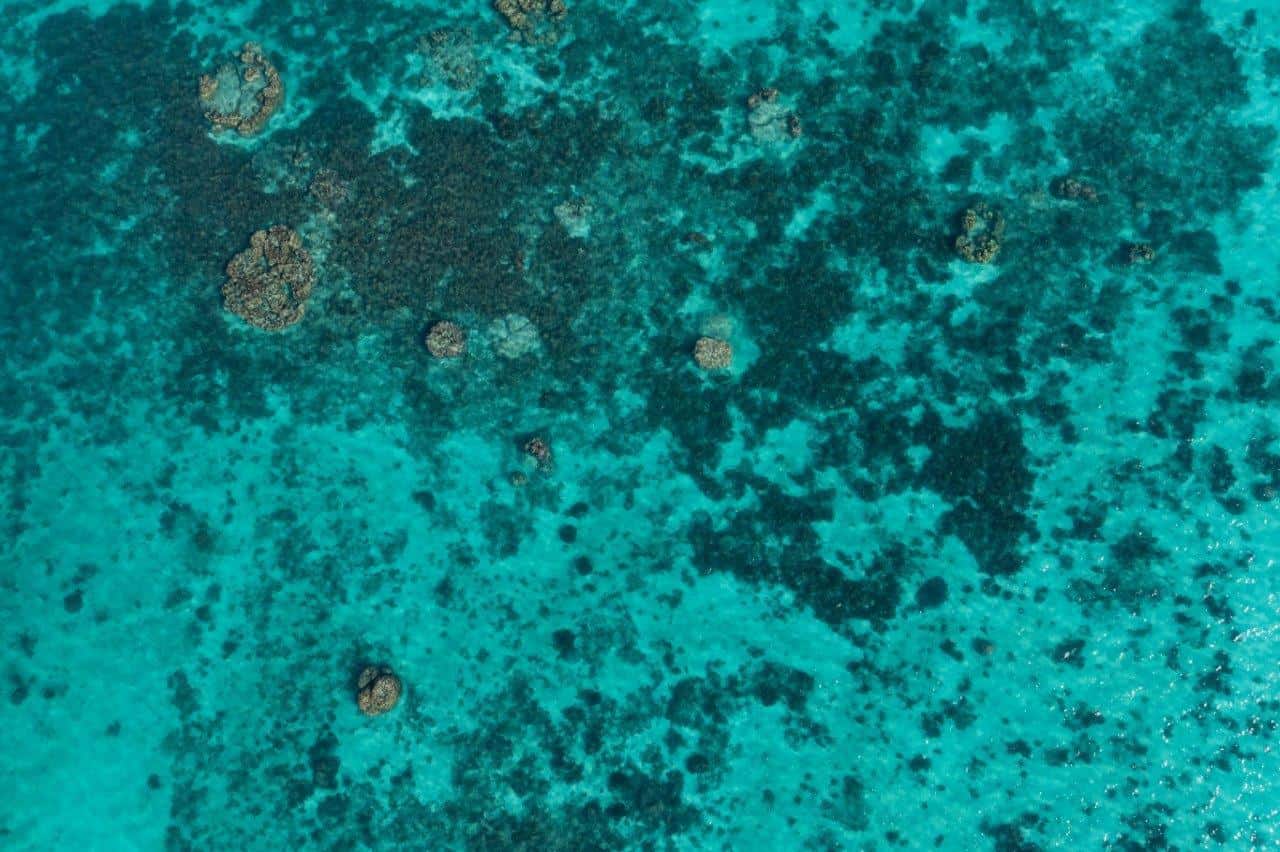 The coral and reef in the area is amazing 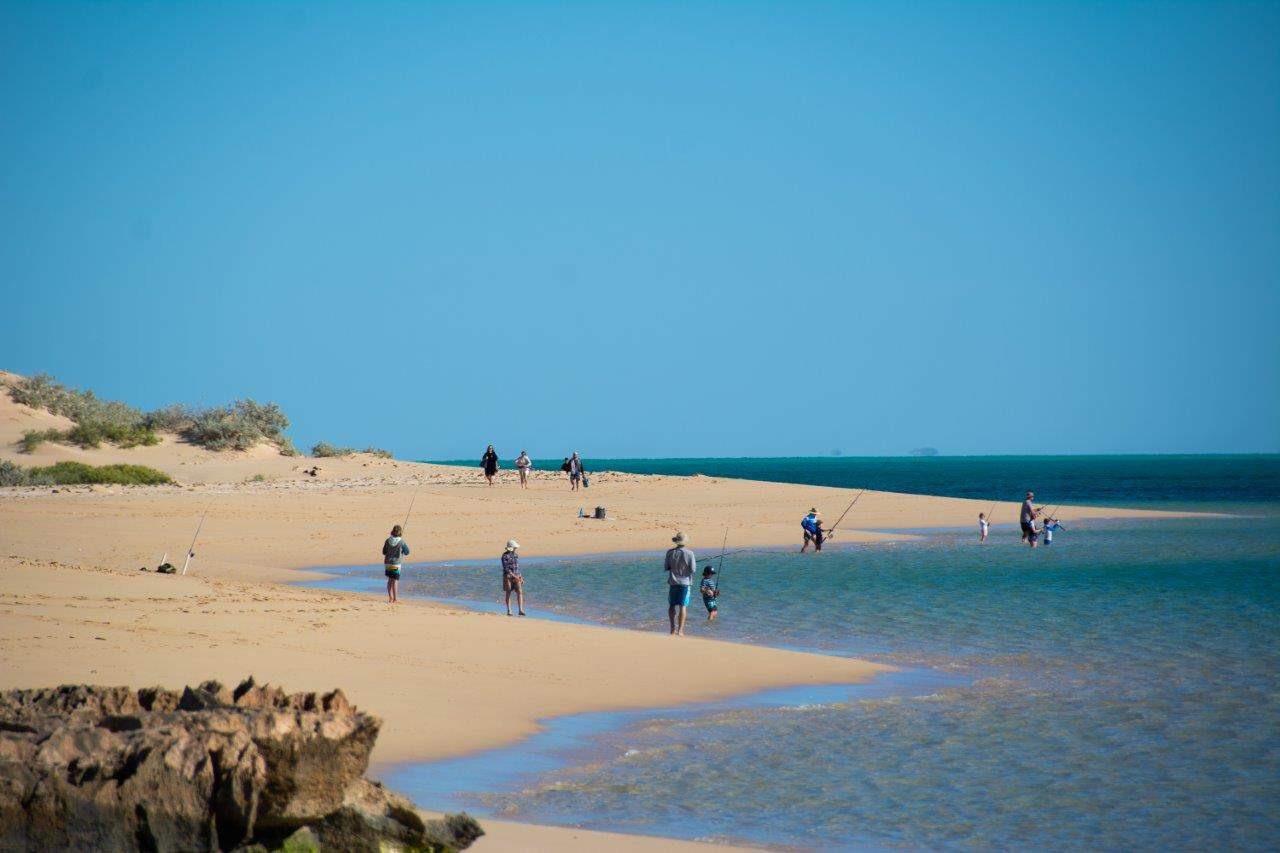 The fishing at Mesa is popular

Don’t be fooled into believing that this picture perfect location doesn’t have any negatives. Go prepared for mosquitos and sand flies, as they are both nasty little biting devils that can make your trip quite unenjoyable if you get hit badly.

We didn’t have a major issue at Mesa, but they are around and its better to be prepared for them. 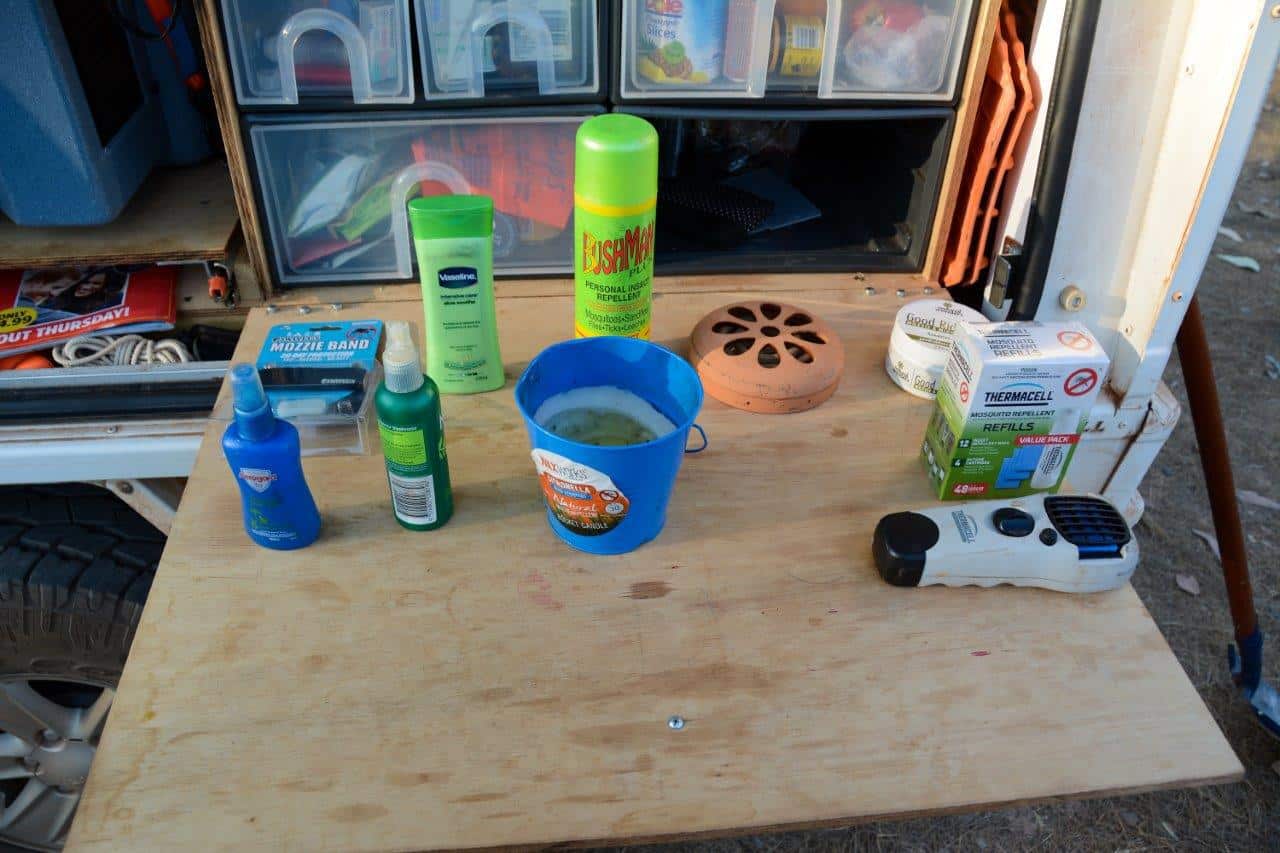 Take some form of Mosquito and sand fly repellent

The best protection is to wear long sleeve clothes where possible. The mosquitos seem to be around early morning and evening, and sand flies are all day, mainly when there is no wind. Both will leave marks that can be quite annoying for several days to come, and longer if you scratch and aggravate them. 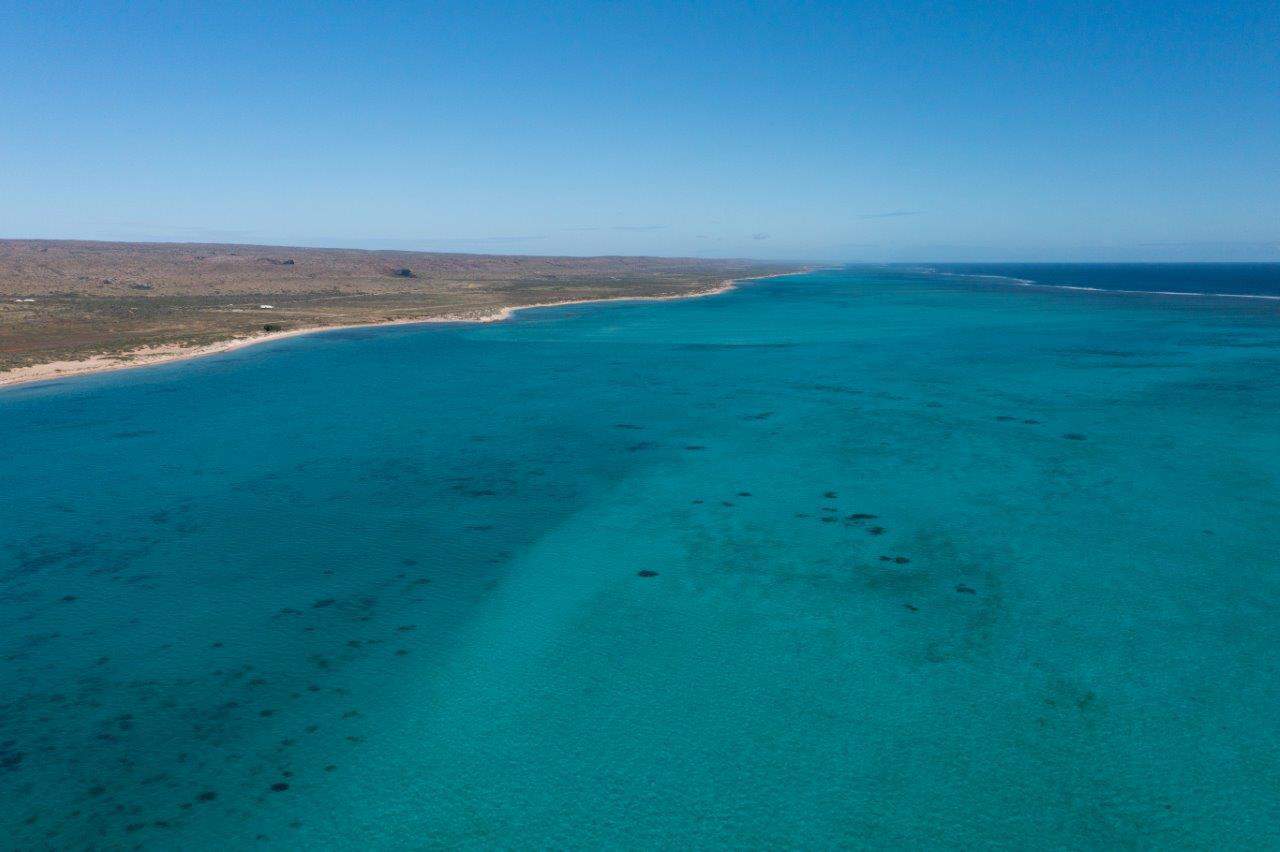 Even amazing places like this have nasty critters to annoy you!

What’s worth seeing nearby?

Honestly? Anything. Literally grab a map and head anywhere along the coastline and you’ll find something nice. Some of the inland gorges are pretty amazing, including Yardie Creek which is our personal favourite.

The snorkeling at different locations is incredible, and the beaches in general are as good as they get. 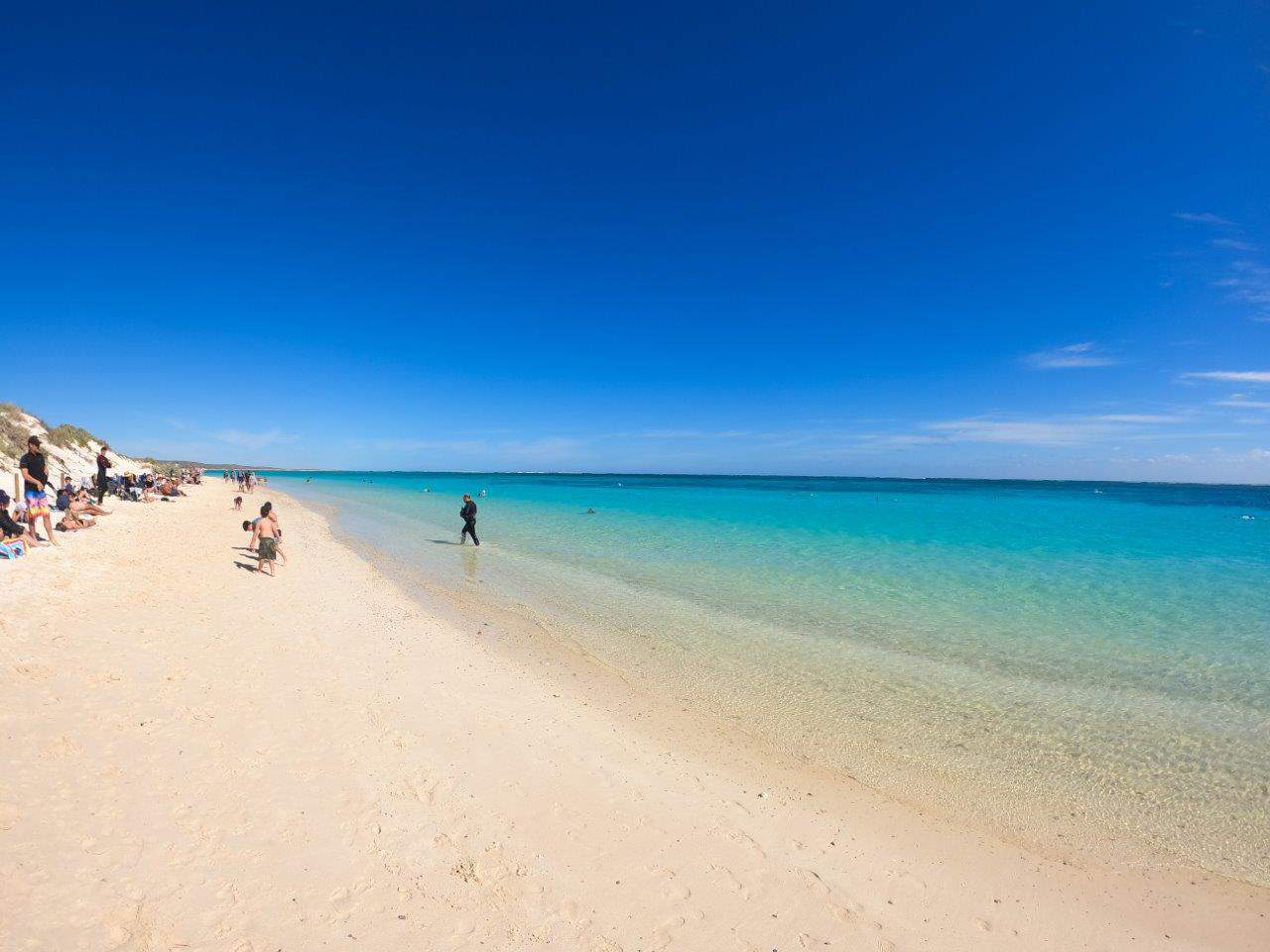 Turquoise Bay is a stunning beach 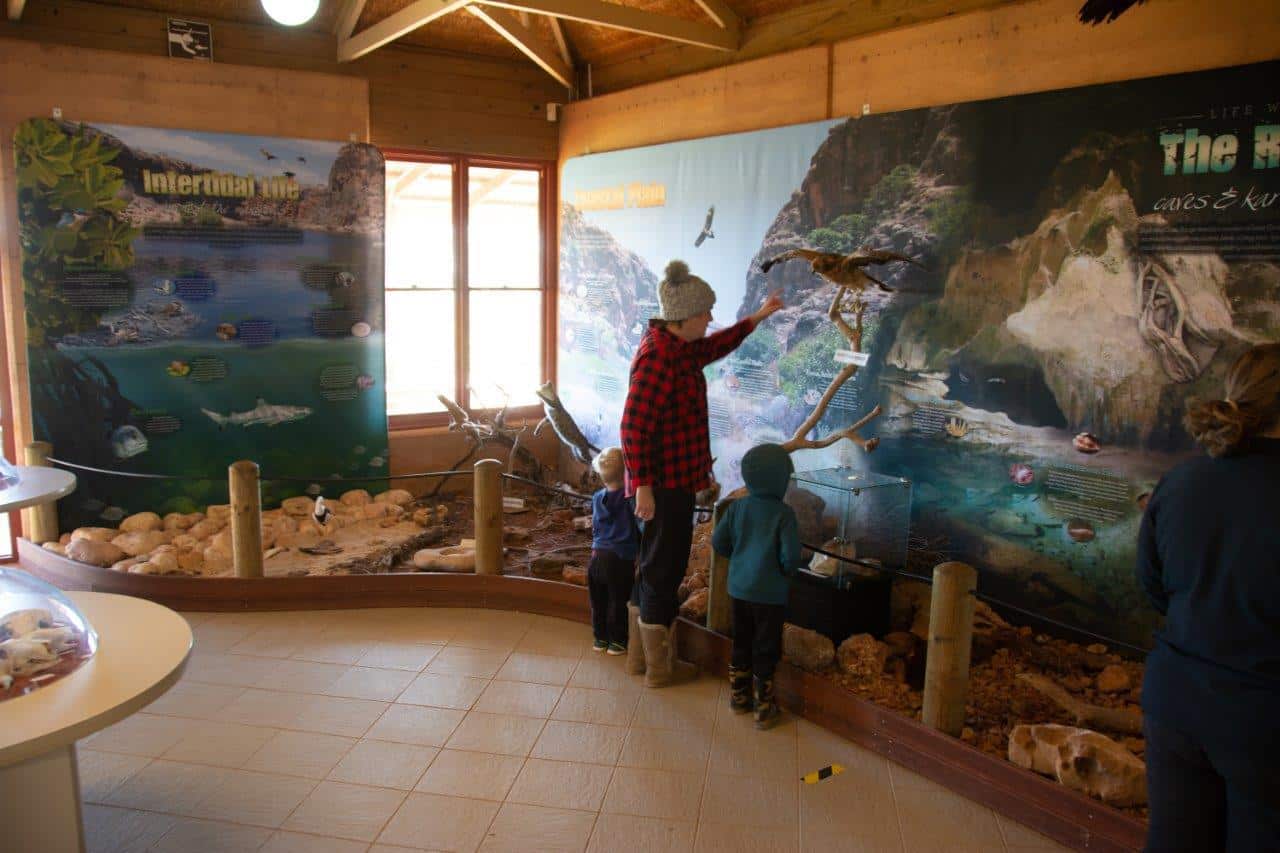 The visitor centre is well worth a look 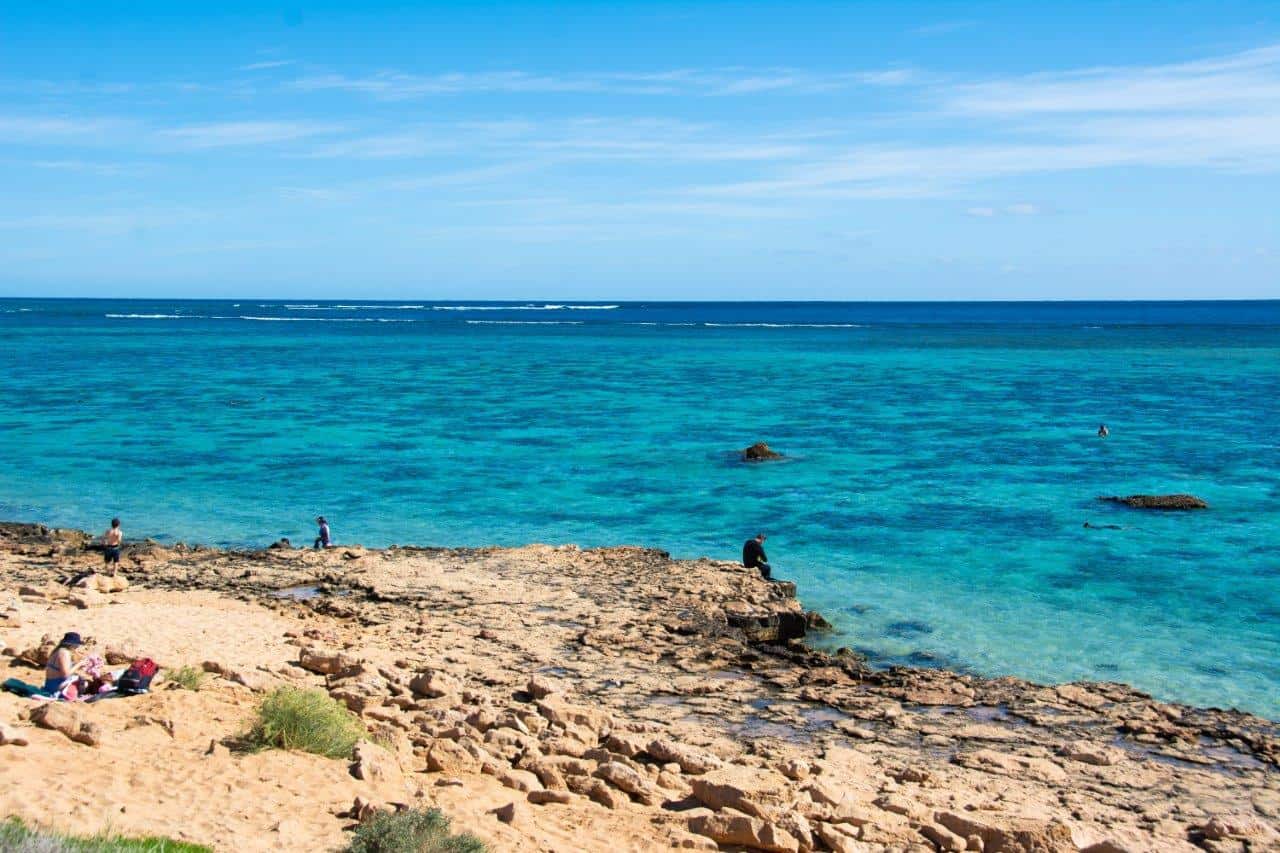 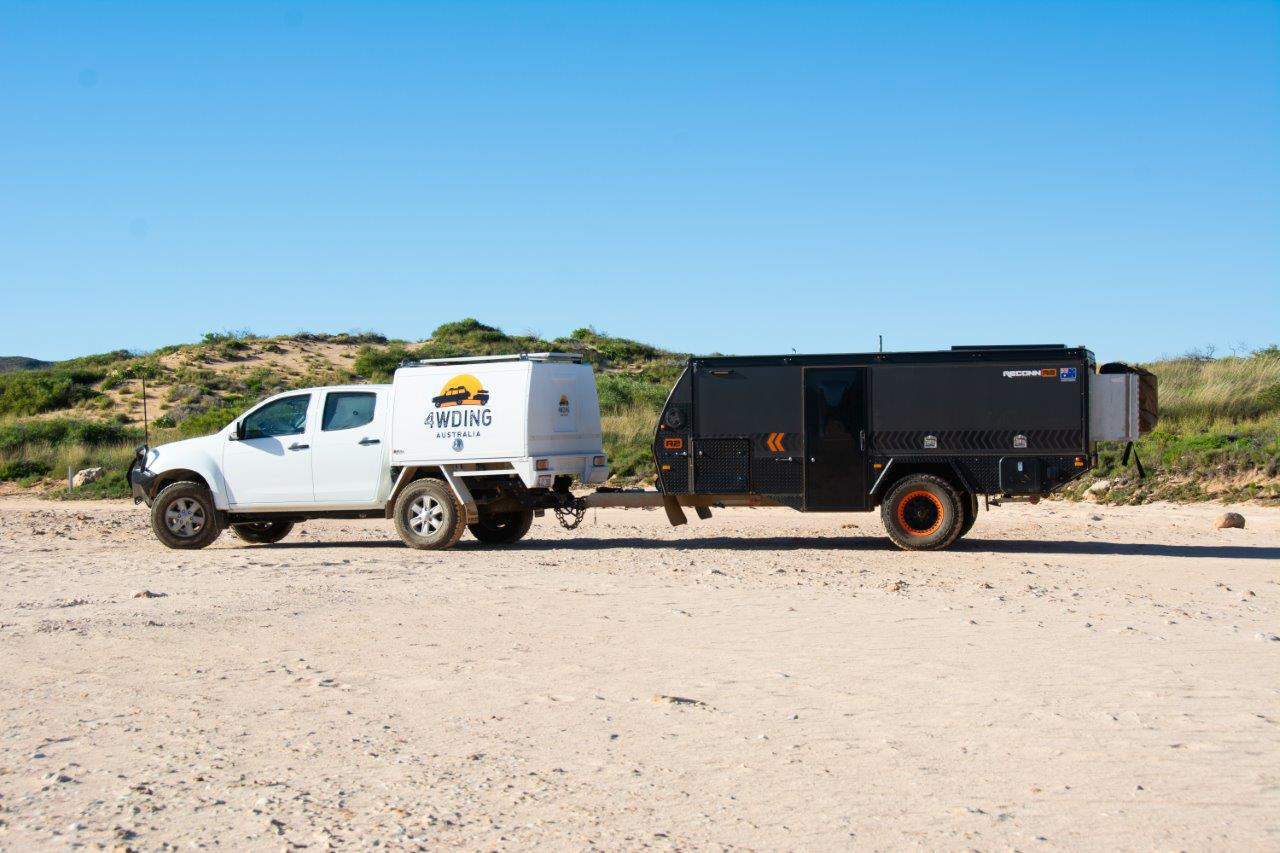 Explore the different turn offs and you might find some surprises 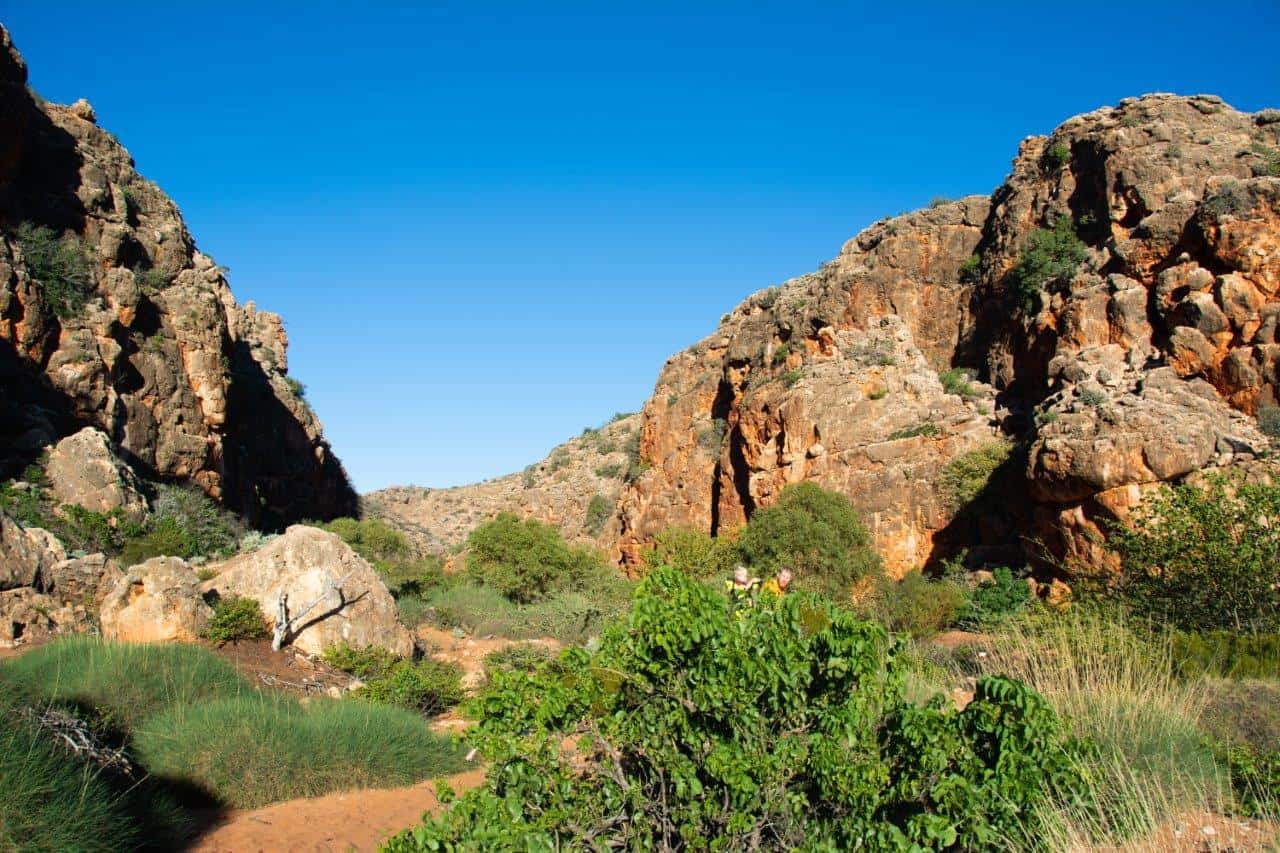 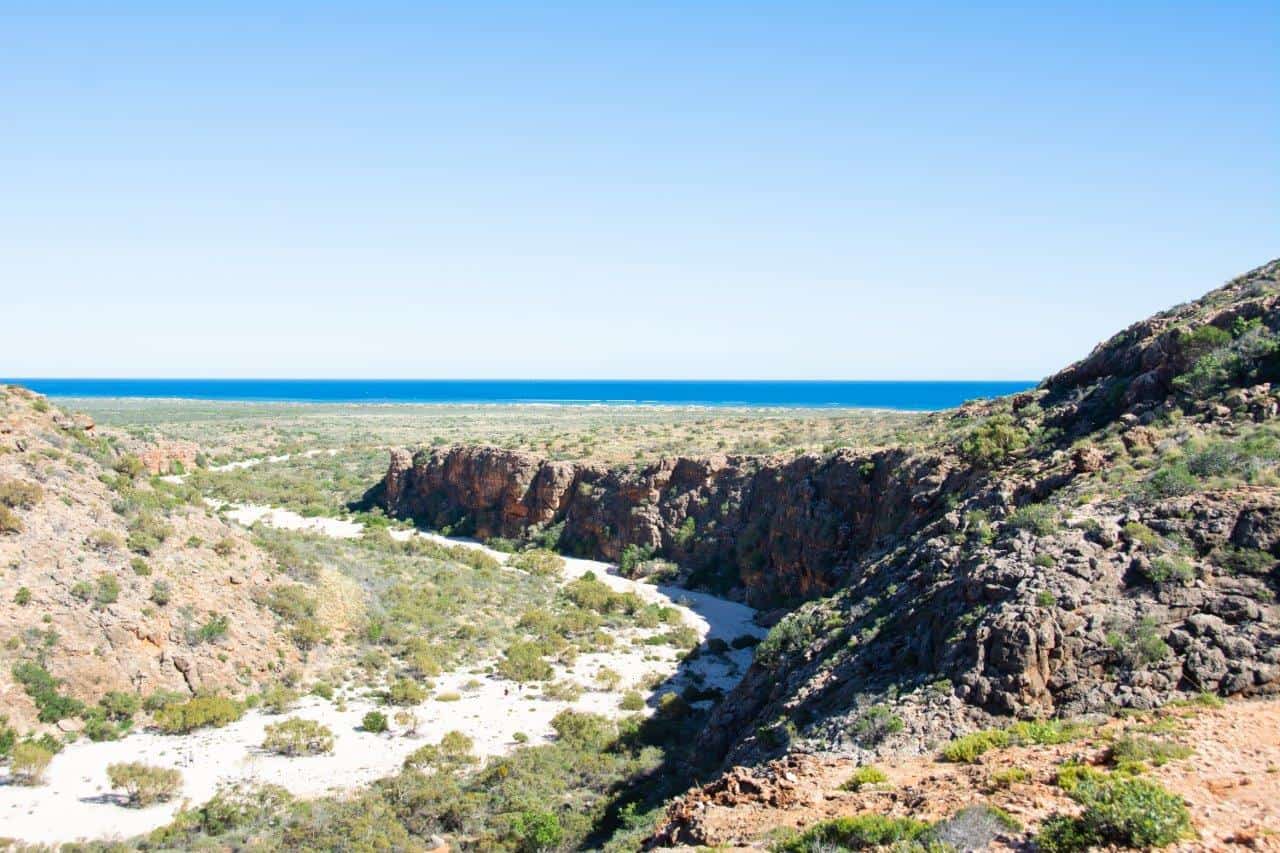 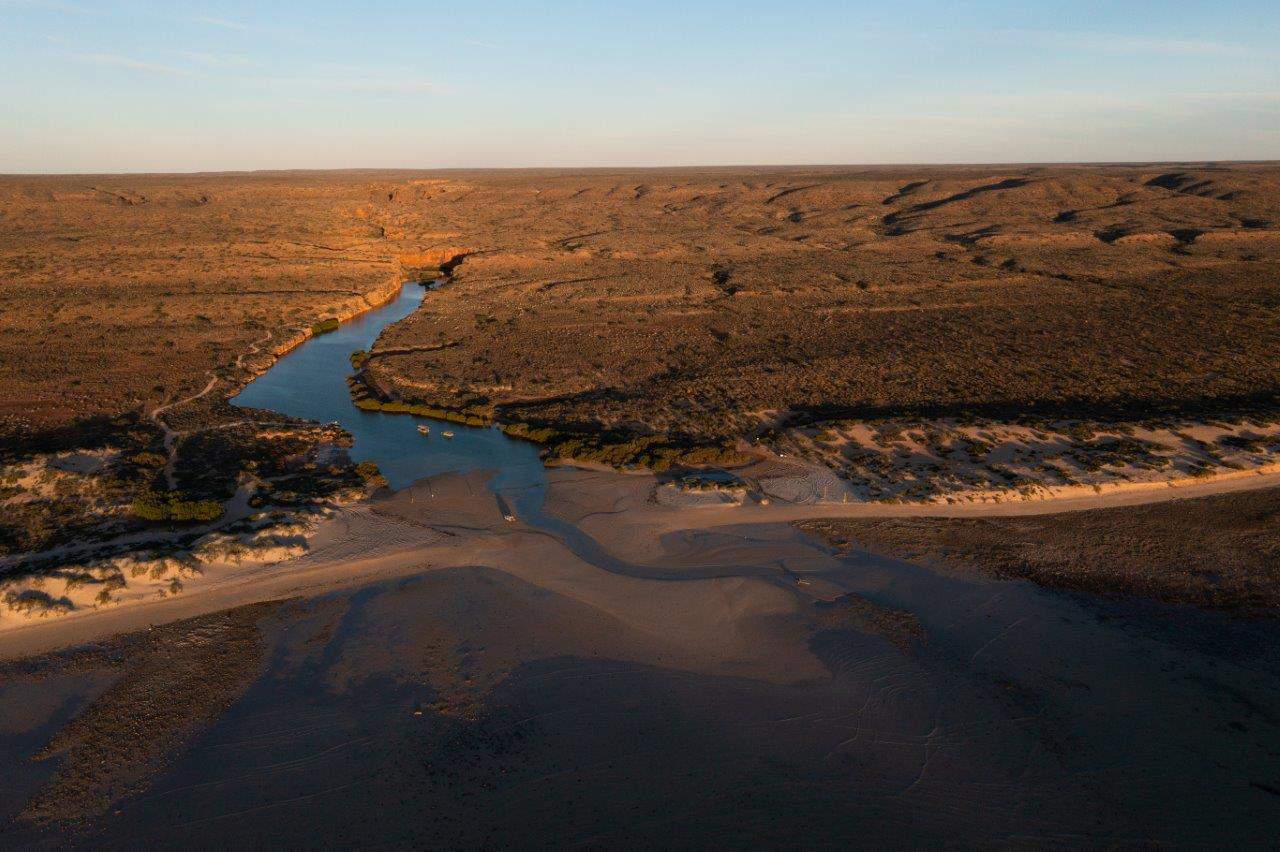 Yardie Creek might just be the most picturesque part of Exmouth

We absolutely loved our stay at Mesa, and would go back in a heartbeat. I think Osprey Bay is as good, or better too, but they are both magnificent. We’d stay at the Cape Range National Park Camp sites any day of the week over anything in Exmouth as well, for location, price and the experience you get.

Have you been to Mesa? What did you think of it?